Leon Davies never got around to chopping this ultra-cool spinner before selling it, but its new owner agreed it needed an altitude adjustment – and Leon was just the man for the job.

THERE aren’t many cars as cool – or as popular – to customise as ’49-’50 Fords, a car we Aussies lovingly call the ‘single-spinner’. The ’51 Fords are pretty nice too, but thanks to a redesign of the grille, we have to call them ‘twin-spinners’. So, for the sake of clarity and brevity, let’s just call them all ‘spinners’. They’ve always been a popular car in the Aussie scene, although we only ever got the four-door sedans (and Mainline utes), but in more recent times there has been a raft of imports, many of them already customised. This one, on the other hand, while being an import initially, has had all the customising done right here in Oz. The man responsible is Leon Davies of Big L’s Chop Shop in Geelong, and while it may have taken him a while, he’s built one of the sweetest custom spinners in the land. It sure won’t win any trophies for panel and paint, but that’s part of the appeal.

While the previous owner had started to update the running gear, that’s about as far as he got. “The motor, gearbox and diff was in it when I bought it back in 2004,” Leon says. “I had a big plan to buy a couple of cars, fix them up at home and flog them off again. I found the spinner for cheap; he had it advertised for $5000. So I bought it, and then I bought ‘Trucky’ [Leon’s bagged F100 shop truck]. I was going to fix up and flog off both of them. Eleven years later and I’ve still got them! “The spinner sat around for about seven years; then I decided to pull it out and start playing around with it,” he continues. “I was just going to get it going at first, then I lowered it a little bit, but thought: ‘Nah, that’s not low enough,’ so I kept going. I always loved the look of a chopped and ’bagged spinner.”

Getting the airbags in and the spinner laying on the ground didn’t take too long, but the roof chop would have to wait: “I figured I’d drive it around for six months or a year and then pull it down again, chop it, do some nice paint and go from there. I guess I was putting in the groundwork with the expectation I was going to do all that.” 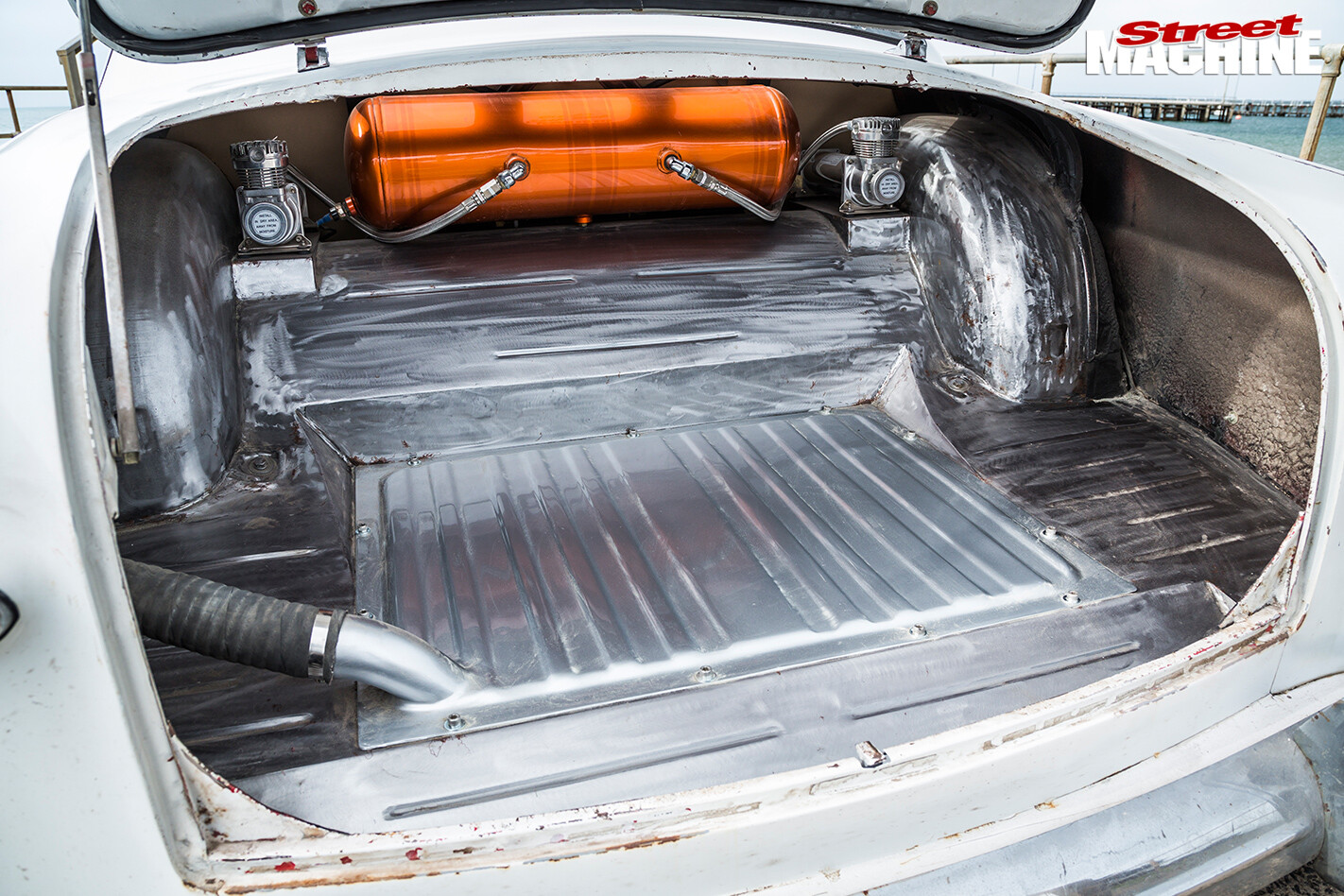 Although it doesn’t look like it, this is what you might call a body-off restoration. The car was starting to show a few signs of age; some of that was patina, which wasn’t a problem, but there was a bit of rust in the boot, so that needed to be taken care of.

With the body out of the way, the mods to the chassis that Leon had planned could be done much more easily. “I’m a big believer, with my own personal cars, of converting everything to right-hand drive,” he says. “People are happy to spend 100 grand on a car, but keep it left-hand drive, then everyone that looks at it probably just thinks you brought it in from the US. I like driving my cars and you can’t beat driving a right-hand-drive car, especially on two-lane country roads. I think when people see it’s an RHD car, they know it’s been done here. 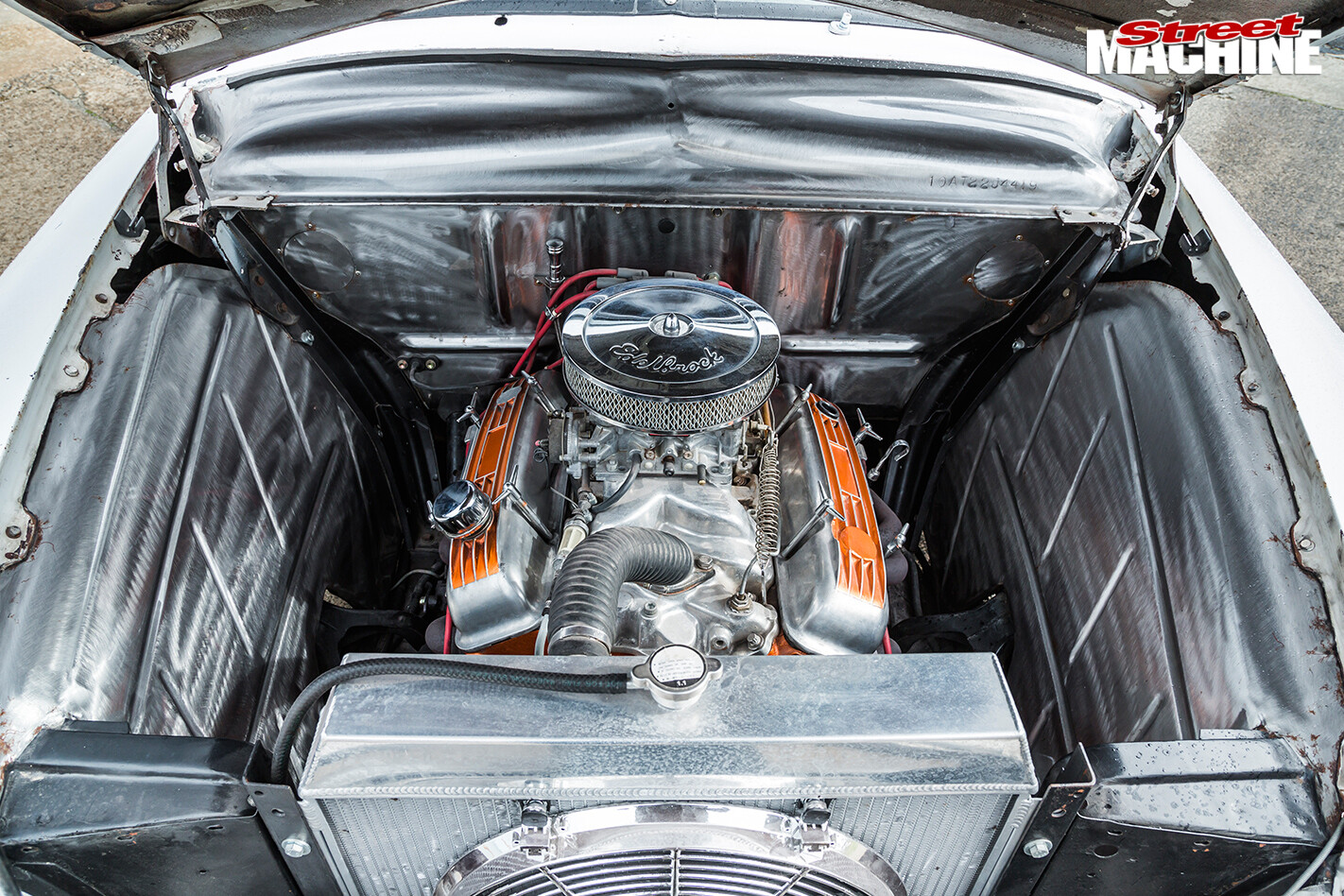 “So over the space of six months, I pulled it down, had all the chassis sandblasted, did the chassis notch, and sourced a Mainline ute from Albury-Wodonga – that’s where I got the dash, steering column and other linkages and brake pedals from,” Leon continues. “I put a cantilever four-link in it, so the airbags are mounted on the bottom arm of the four-link.” The four-link set-up makes for a more comfortable ride, and because the airbags have been installed forward of the diff, it increases the amount of suspension lift you get from the same amount of airbag travel.

Another neat thing that Leon discovered about spinners is that the chassis rails are stamped as mirror images of each other, right down to all of the mounting points and bolt holes. This was of real benefit when it came time to convert the car to RHD. “All of the brake recesses are the same left to right, and all of the holes have crush tubes in them already, so the RHD box bolted straight in,” he says. “It only took a day to do the conversion. The most work was getting the brake pedal sorted out.” 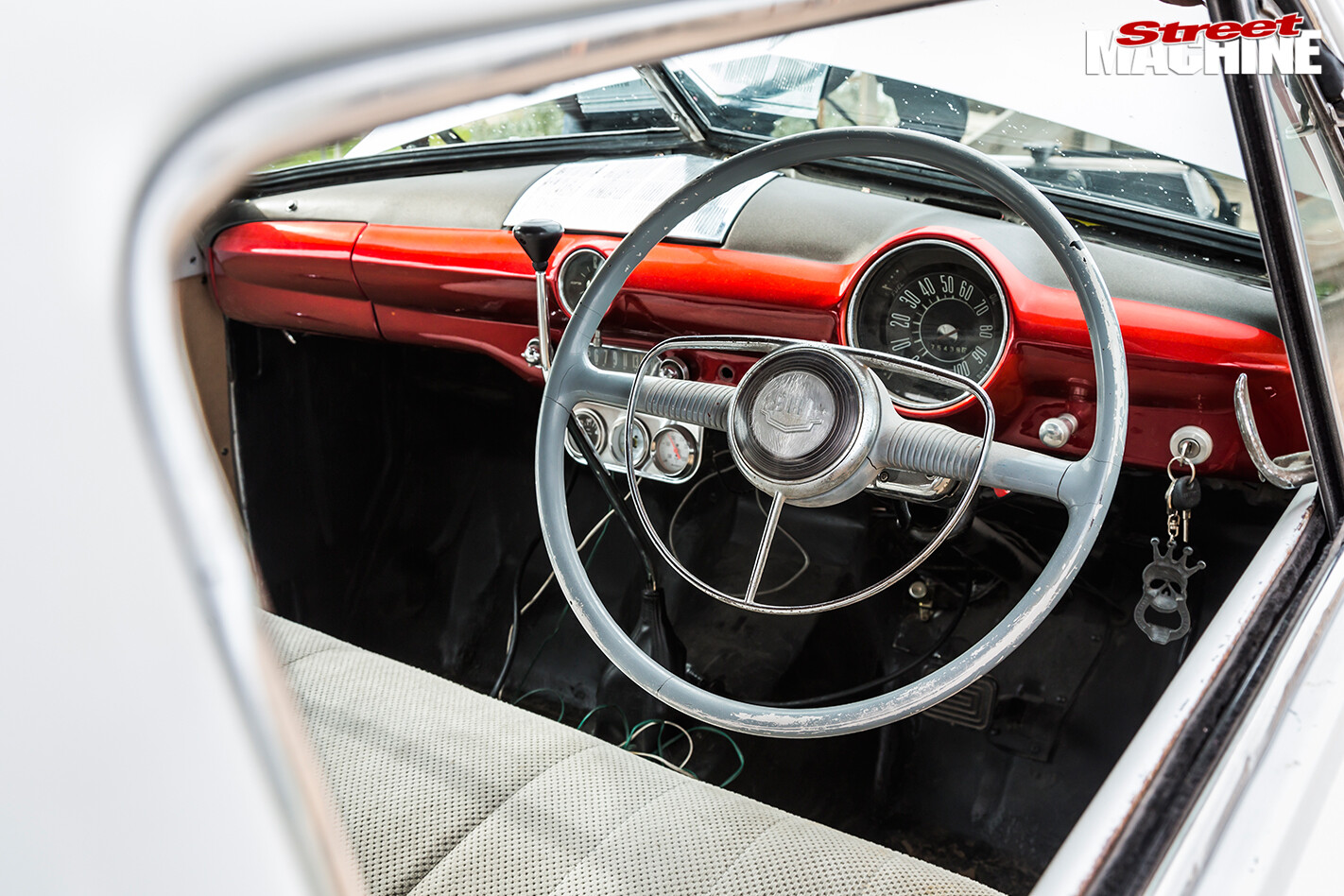 Getting the car sitting this low required a fairly serious amount of chassis work, but Leon still wanted to make sure it would be useable as a cruiser, which meant the back seat had to stay untouched. With a big kick-up in the rear and a four-link, this can get tricky, so he designed some templates and then fabricated the chassis rails so that they kick up after the rear seat. The front suspension also had a bit of tweaking, with Leon relocating the lower arms to get the car extra-low. “Even with the big tyres, it can still get the chassis on the ground,” he says. Yep, that’s low enough!

4
The exhaust is tucked right up and goes through the holes in the crossmember, so there’s nothing lower than the chassis. It can sit on the ground even with those tall tyres

Getting those big tyres tucked right up meant the body needed a bit of massaging as well, both in the front and the rear. “I used the hoist to lower the body back over the chassis and then I just worked out where it was hitting and made it all fit. I had to cut out part of the tunnel for clearance, and the wheels bottomed-out on the stock tubs,” Leon says. 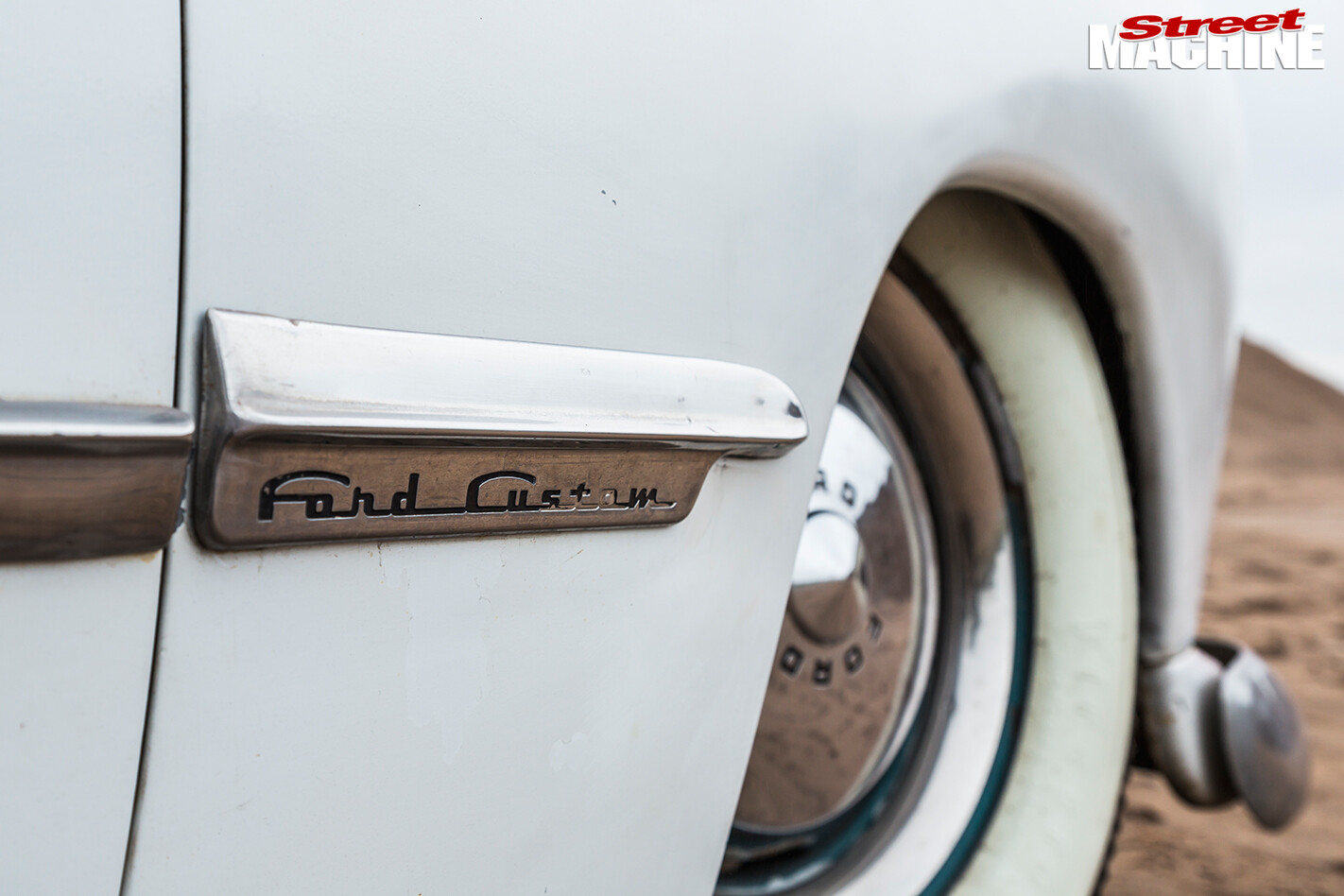 At the front of the car Leon removed the inner fenders and the air vent tubes that run down both sides of the engine bay and then fabricated new ones from sheet metal, running swage lines along them to add strength and also to make it look a bit more factory. The firewall also needed a fair bit of work, but that was mainly to fill the 40 or so holes that weren’t required.

In the boot, the wheel tubs were cut out and moved up a few inches and a completely new floor was added. A brand new Mustang fuel tank was dropped into place with the fuel filler swapped from the middle to the left-hand side. After it was all done, Leon thought it looked pretty good in bare metal, so he shot it with some clear.

4
The tank for the airbags can be seen through the holes in the parcel shelf. It’s the flashest looking thing on the whole car

The car was finished – well, as finished as it was going to get – the night before the Kustom Nats a couple of years ago. It made it down to Phillip Island with no problem and cruised around all weekend, but eventually some gremlins made their way into the distributor and over the next couple of years the spinner didn’t get used nearly as much as Leon would have liked. 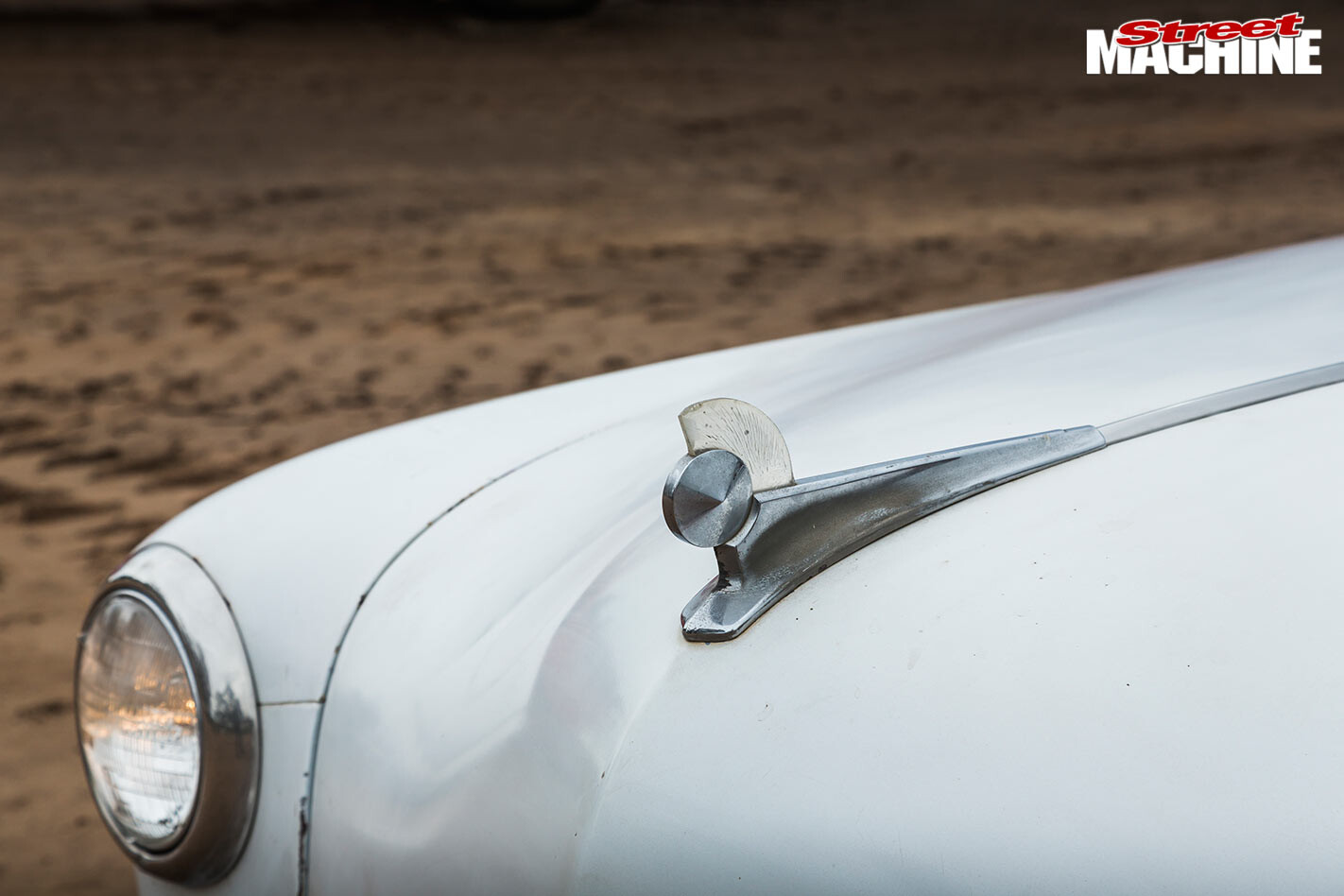 Unsure what to do with it, and with a desire to get some other projects underway, Leon decided to put the spinner up for sale: “I wanted to chop it, but everyone said I should leave it, that it was so cool the way it was – which it was. A lot of people talked me out of doing something with it, so I decided to sell it.

“I advertised it a few times and a bloke from Sydney – Matt Gatto – bought it. It was probably a couple of days out from leaving my place and he called me back. He said: ‘Man, I’ve got this crazy idea, are you interested in doing the chop on it?’ He left it in my hands, he just said: ‘When it’s finished, I want it to look like it’s been that way for the last 20 or 30 years.’”

4
Even with the roof chop, headroom is not an issue

Looking at the pics of Leon’s handiwork on these pages, I’d say it’s mission accomplished, and when you think about it, things couldn’t have worked out better for him – he sold the car, still got to chop it and got paid to do it!

When it comes to chopping a roof, there aren’t too many instruction sheets. At the end of the day it all depends on how low you want to go and your personal taste for how you want it to look in the end. I think Leon’s nailed this one, mainly because he hasn’t gone too low, taking just three inches out of the front and four-and-a-half out of the rear. Regardless of how much metal you take out, the trick is to make sure it all flows, and I’m sure you’ll agree Leon and the boys got it just right.

Chopping the spinner gave also Leon a chance to fix up a few of the little things that had been bugging him, and he spent a lot of time re-hanging everything and making sure all the panel gaps were spot-on. “It’s a better car now than when I had it,” he says. Here’s the ‘before’ shot. As you can tell, it was already ’bagged and looked pretty nice as it was 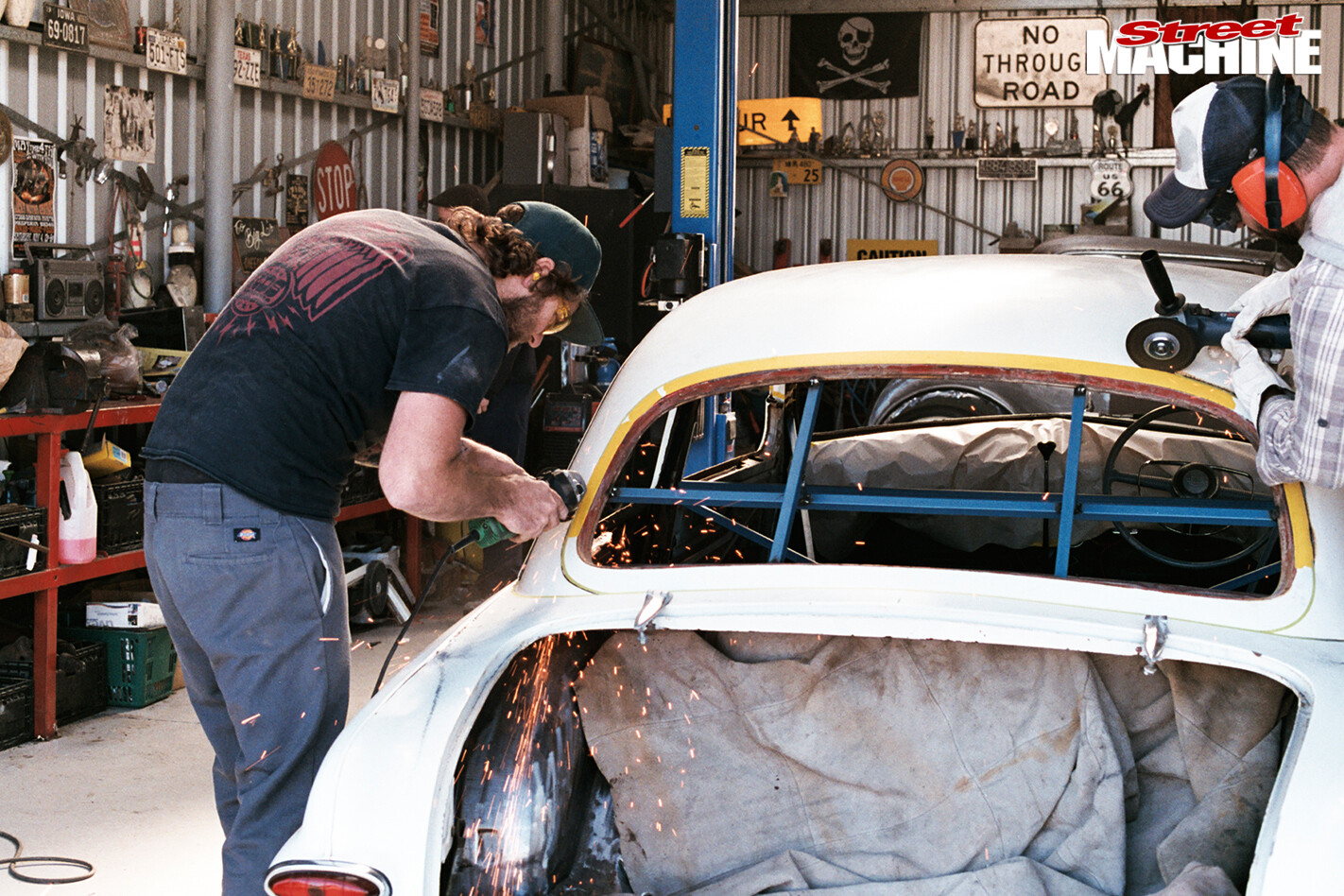 The entire rear window was removed, as Leon planned to move it forward a touch. Usually the rear window is left untouched, as you can’t cut it. You can get custom glass made, but it’s not cheap 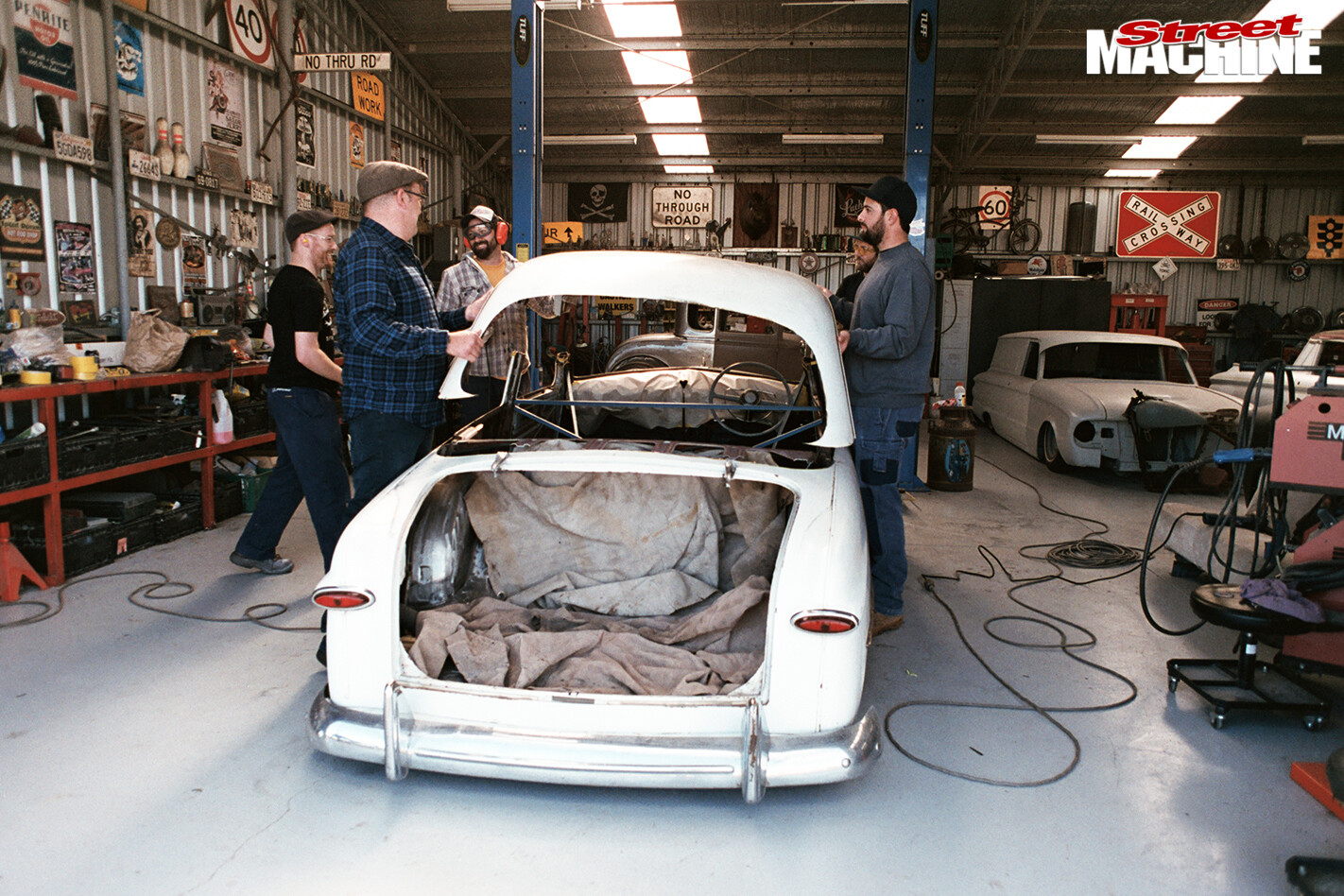 When you chop a car, never throw any of the bits away, as they come in very handy when you need to reshape the door frames to fit the new opening With about three inches taken out of the front and four in the rear, the roof was laid back on to see if it looked right. The consensus was it needed about half an inch more out of the rear It’s important to get back and check out your work from a distance. Looking pretty good from here Cam, Curtis and Leon discuss the finer points of the chop. You can see how far the rear window had to come forward, because as you chop the roof it gets shorter in length as well as height 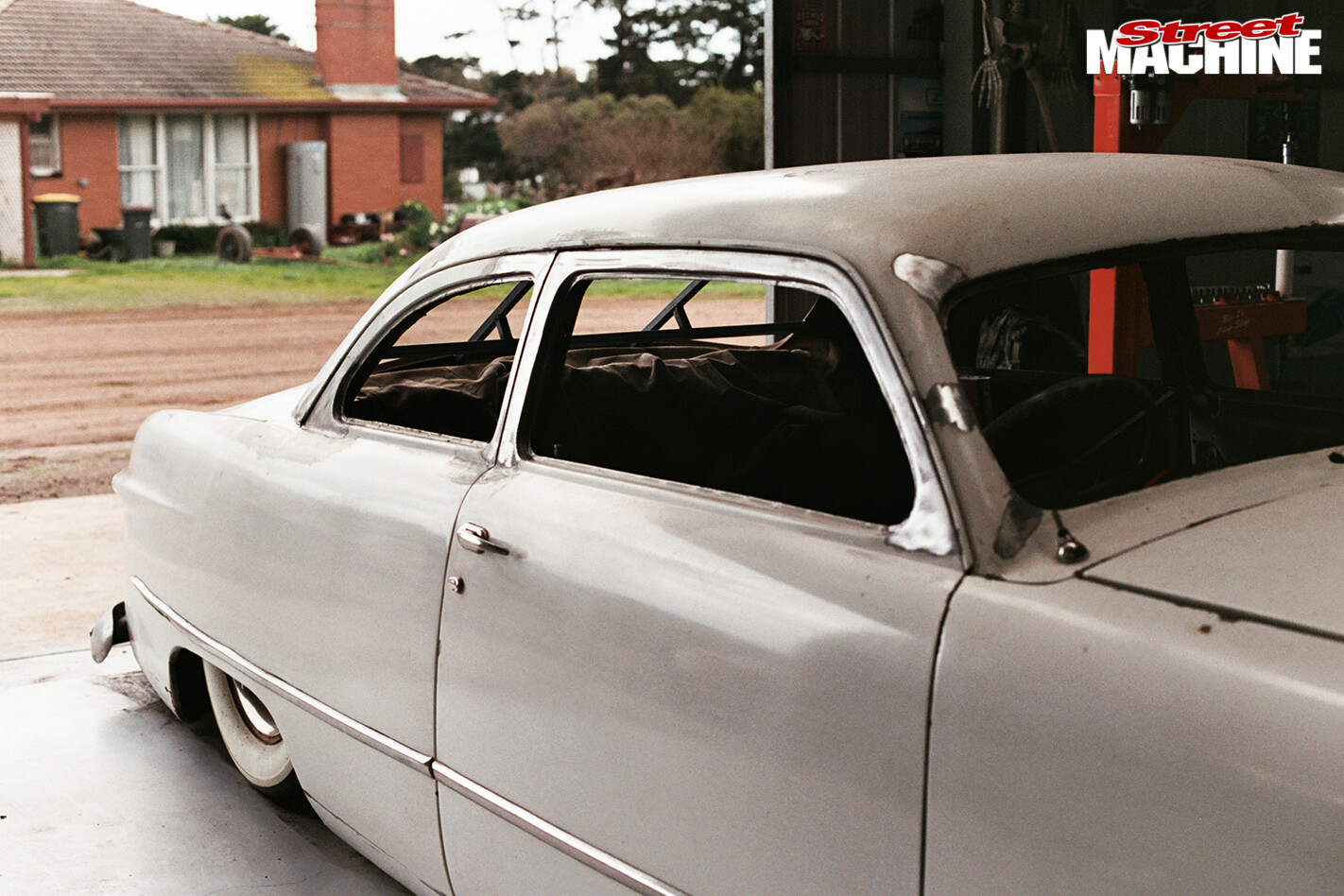 This is where most of the magic happened. You can see the weld joins for the new section that was made for the C-pillar as well as the piece added behind the rear window 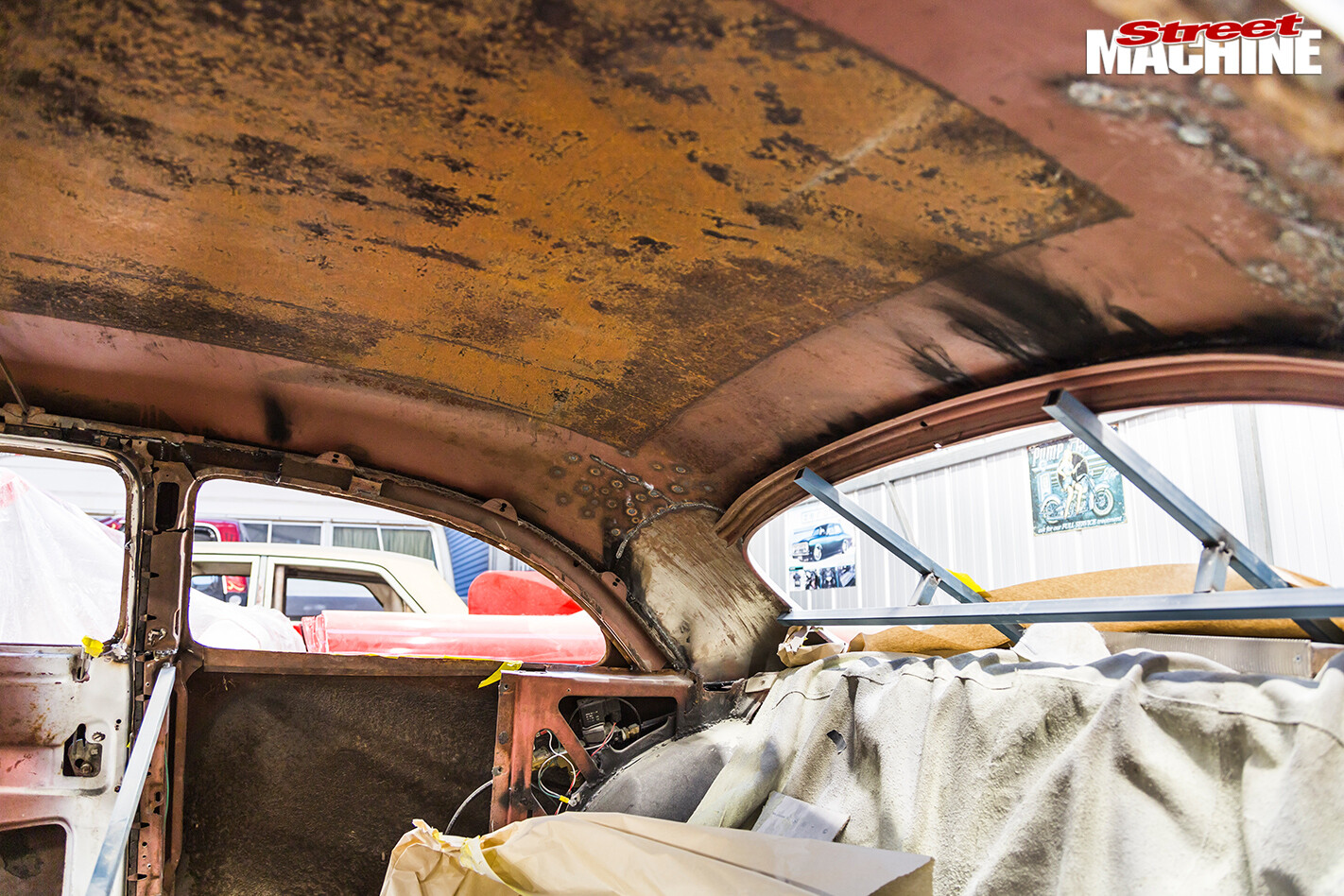 Here’s a view from the inside. You can see the fresh bit of steel (and the wheeling marks) as well as the relief-cut and heat-shrinks that were required to get the shape and flow of the C-pillar just right The chop is done and the templates for new glass are cut. Apart from the rear window, all of the glass is flat in these cars, so it’s not difficult to get it all sorted