MAN, this FJ is the bomb!” I accidentally say out loud, to no one in particular. I’m out scoping cars for both business and pleasure at the Adelaide Auto Expo, and I’ve just spotted a heavily customised humpy glistening under lights. This silver FJ is a fusion of new and old, with all the classic custom FX-FJ tricks – chop top, flip bonnet, rollpans, recessed number plates, two-door conversion – but in a classy, modern-style build. 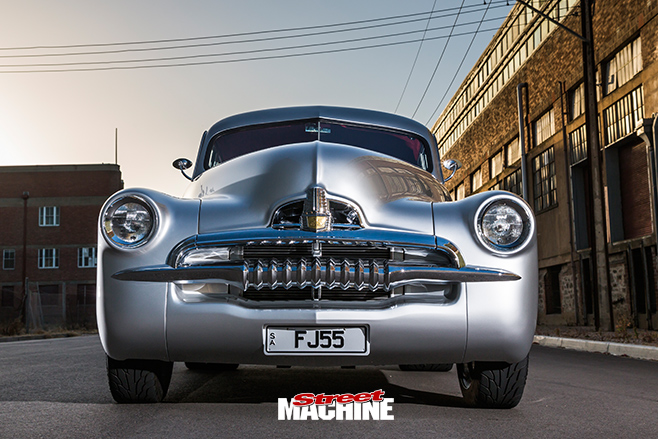 I feverishly hunt around but can’t locate the owner. Thankfully, there are prominent Pro Customs flags right beside the beast, so I’m soon in convo with Anthony Lanzotti and his talented Pro Customs team, the builders of this amazing ride. 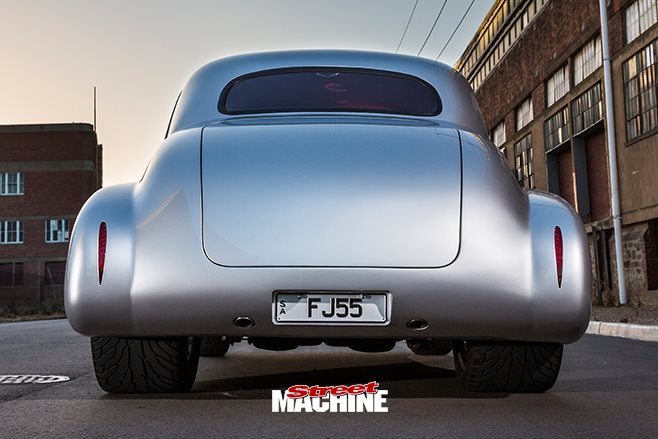 With a build of this calibre, there’s only one place to start, and that’s with a bare body. Anthony says they had the added fun of starting with a tinworm-infected example that had also received its fair share of knocks over the past 60-odd years. Thankfully they planned on binning a heap of it anyway, then modifying the rest. 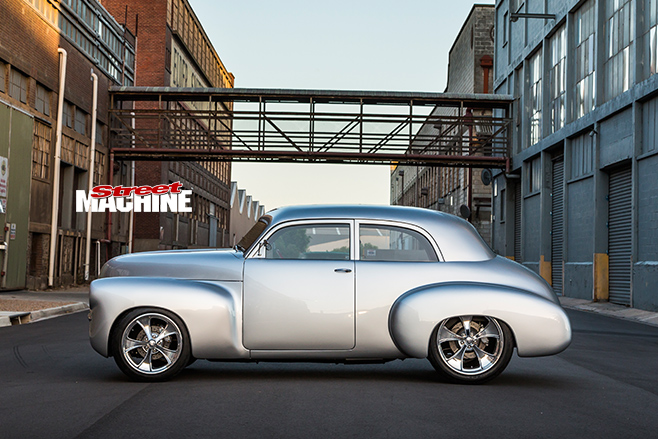 With the roof chop and deletion of the quarter vent windows, custom glass was required. The runners in the doors had to be modified to suit, and power window motors were tossed in for good measure. “There’s not a lot of FJ left in it,” Anthony says

Very little of this humpy remains untouched. The roof’s been chopped two inches, for that on-point, custom FJ look. Working lower, the Pro Customs crew have welded the back doors shut, then extended the fronts by 150mm using infill panels. 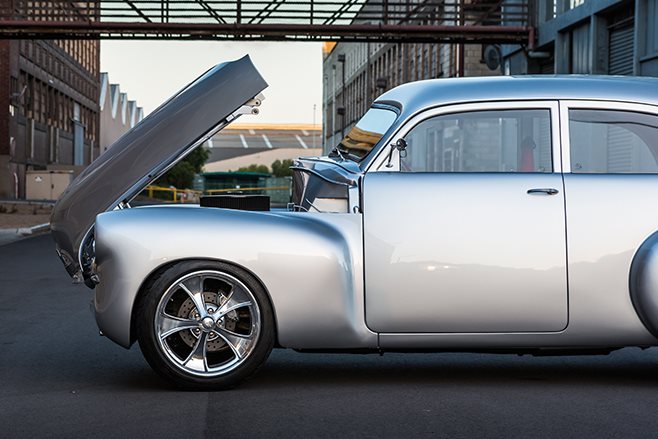 The forward-tilting bonnet kit is an AutoLoc product, but it required some serious tweaks to work with the FJ’s curvaceous hood. “The kit was designed to work with a flat bonnet, so it took a lot of mucking around to get it to work properly on the FJ,” Anthony says. “There are guides and rollers at the front and there was a lot of trial-and-error involved, but the owner really wanted it, so we went through the process. It probably took around 100 hours all up.” 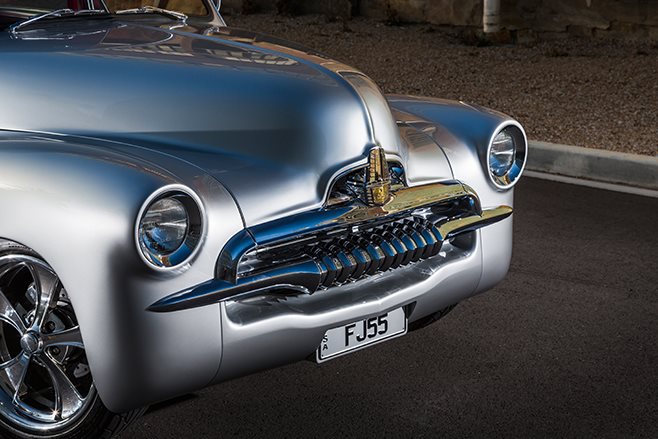 Further forward are AutoLoc frenched headlights and an extensively made-over grille. “We used two grilles, and metal-finished it before re-chroming,” Anthony says. 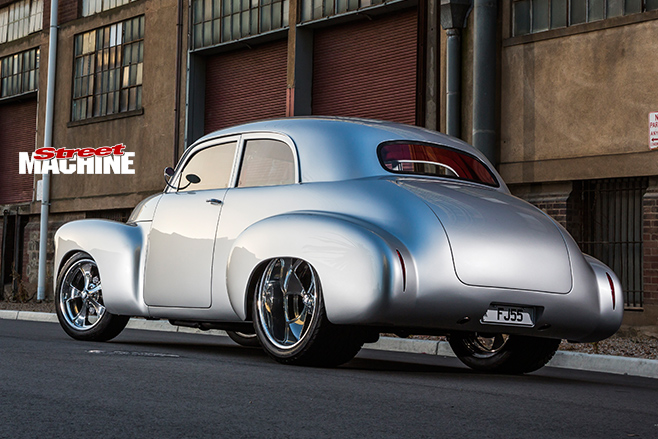 And the guards? Yeah, they copped a heap of work too. “We split the guards in half and added three inches to widen them,’’ Anthony explains. At the rear, they’ve extended the lower rear panel, smoothed the boot, and added thin, flush-mounted Hagan Street Rods LED tail-lights. Both the front and rear are bumperless, a move so well-executed that only the keen enthusiast will pick it first go – the car looks like it was born that way. 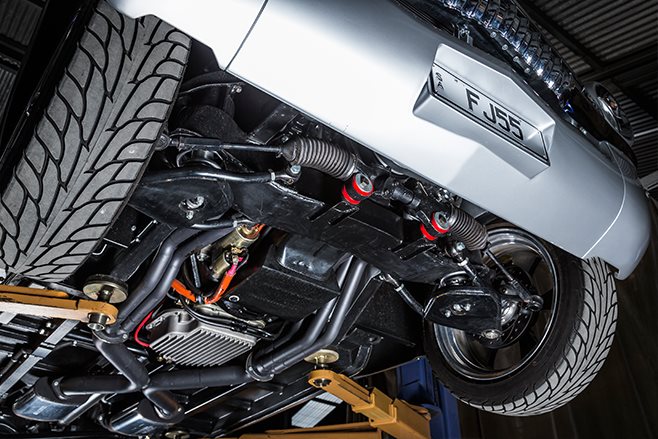 Underneath is a flat floor from front to rear, with tubs to suit 15-inch-wide tyres. FJs were originally of unibody construction and need significant reinforcement to run V8 power, so the car now has a chassis fabricated from RHS steel. Suspension-wise, the rear leaf springs have been replaced by a parallel four-link rear end, while the kingpin front end has been replaced by an HR crossmember, suitably modified by Castlemaine Rod Shop. Complete with tubular arms and a steering rack, it goes a long way towards dragging the FJ’s ride and handling characteristics into the modern era. 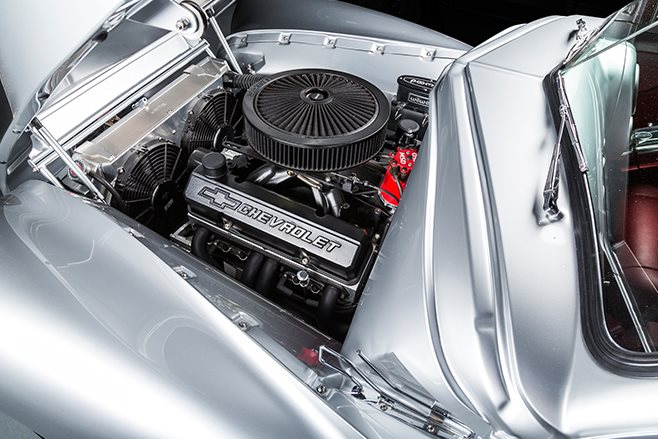 Squeezed under the tilt-bonnet is a stout 427-cube Chev. “Making the custom extractors was very tight,” Anthony says, but the Pro Customs guys were able to create some extra real estate by moving the brake booster under the guard and fabricating a brand-new firewall that was shifted rearwards

You can’t go full-tilt on a build without adding some decent mumbo. In this case, it comes from a tough 574hp 427ci small-block Chev. It’s topped with an Edelbrock Victor Jr manifold fed by a 750cfm AED Performance carb. Below are Dart Pro1 heads and a Crane cam. Compression is at 10.5:1 thanks to JE pistons, while a Scat stroker crank affords a significant increase in cubes. An MSD 6AL ignition with Blaster SS coil ignites the PULP; the spent gasses then evacuate via custom 1¾-inch four-into-one headers through custom twin 2½-inch Magnaflow mufflers. The lot is cooled by an electric CSR water pump, Ron Davis radiator and thermos. 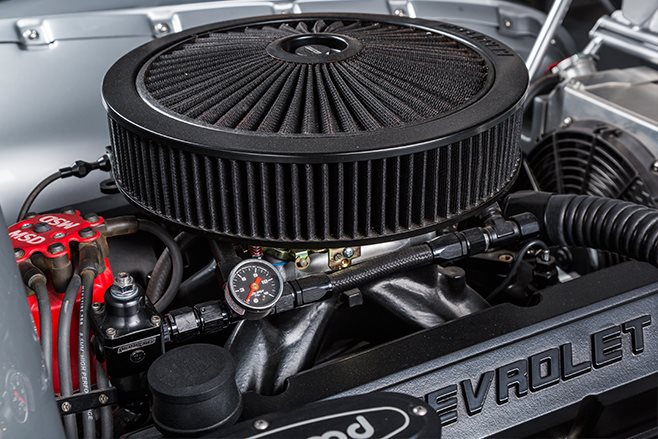 Bolted behind is a toughened Coan TH400 with a 4000rpm stally. This sends power through a four-inch tailshaft back to a nine-inch, packed with 4.11s, Strange axles and full-floater hubs.

Viking coil-overs keep the shiny humpy stable, while Wilwood discs bring it to a stop. Bolted on all four corners are Billet Specialties Fuelies, with 18x7s under the front and beefy 20x12s wrapped in huge 29x15 Mickey Thompsons under the bum. 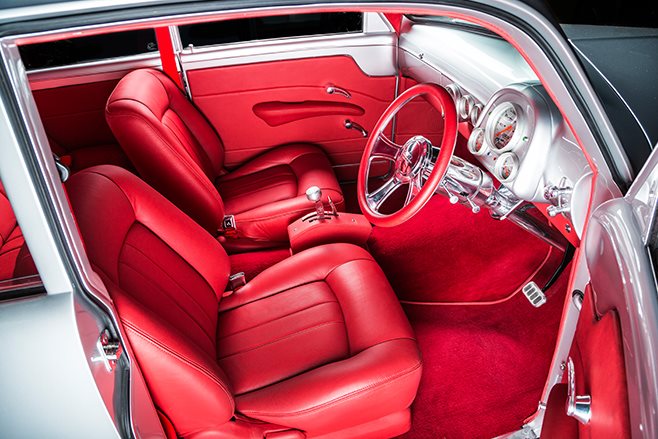 Red leather with billet highlights is always a winner. Up front are modified Mazda buckets, with the rear pews altered to match

Outside, the team created a jewel by drenching the FJ’s body in PPG silver. Monaco Auto Trimmers then ruby-studded the gem by swathing the cockpit in red. They customised the Mazda seats and door trims, then covered it all in red Italian leather. The smoothed FJ dash houses a handful of Pro-Comp and Ultra-Lite Auto Meter gauges, and the classy custom theme is finished off with a Billet Specialties 15.5-inch Chicayne tiller and a B&M Pro Rachet shifter. There’s even a Kenwood stereo to provide the tunes, should the stroked V8 melody become humdrum. 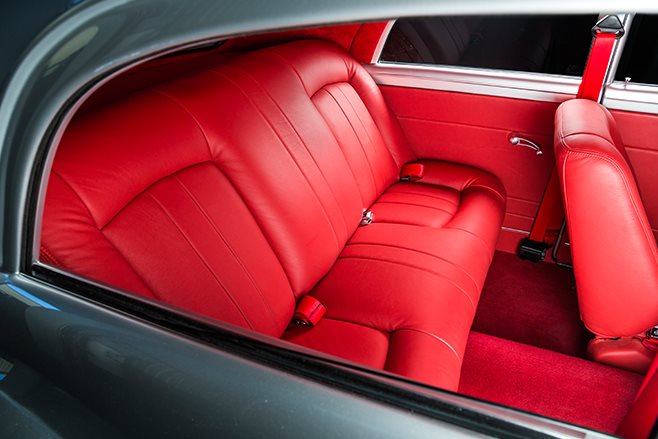 The pattern in the door cards continues from the kick panels all the way through to the rear of the cabin, and the headlining is a single piece of suede

But the truly beaut thing about this wild custom humpy is that it gets street-driven. “It passed engineering and rego inspection first go,” Anthony says. “It was hard to work out the mods and colours, trying to picture how it was going to look, so the best part was the paint and assembly. You know, it’s getting to the end of the build and you can see how the body curves and lines stand out.” 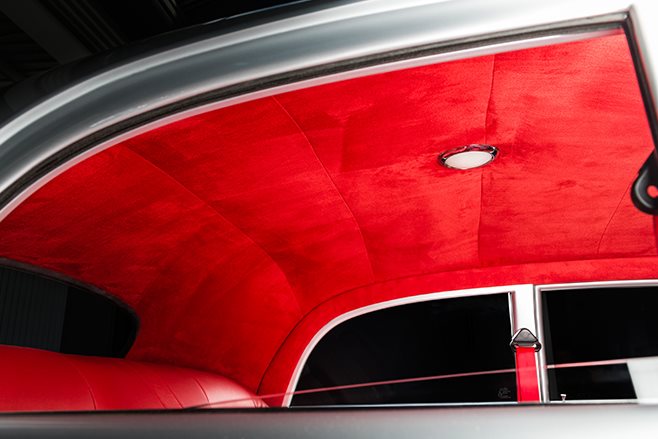 And he should be super-chuffed, because after five years in the making, the humpy received a raft of gongs at its 2015 Extreme Auto Expo debut. There, the stoked Pro Customs crew took home Best Street Machine, Top Innovation & Engineering, and a coveted invite to the 2016 Meguiar’s MotorEx Superstars. 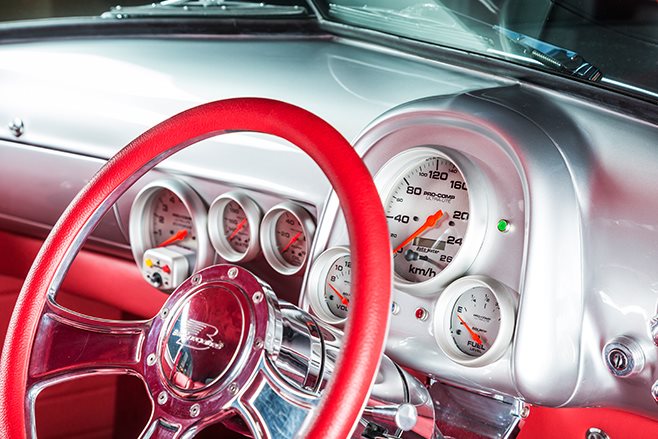 MotorEx is no cakewalk, so Pro Customs brought their A-game, giving the FJ a hefty freshen-up before the big event. “It had been driven, so there were a few minor chips and scratches,” says Anthony of the respray they gave the car in preparation for showtime. And it sure paid dividends, with the judges getting a decent look at the work involved and awarding the ’55 two-door a Bronze medal in the Superstars Elite bodywork category.

Turns out I’m not the only one bowled over by FJ55! 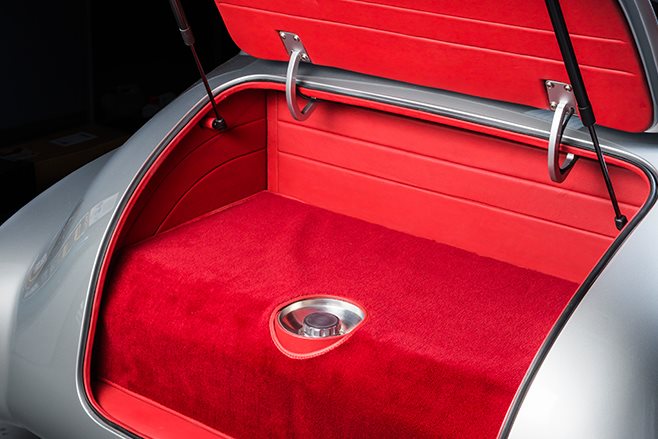 The boot is dominated by a custom-made aluminium fuel tank that’s been trimmed to match the cabin. At approximately 80 litres’ capacity, it gives the FJ a halfway-decent fuel range. The billet boot hinges are from AutoLoc 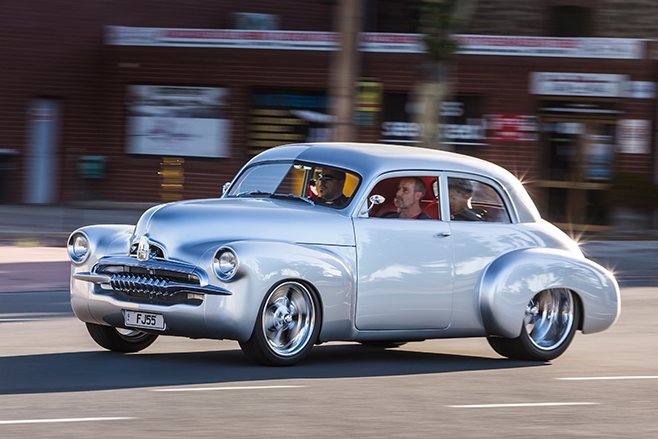