STREETERS are awesome but in today’s world, driving your dream ride all over the country is expensive. Fuel costs alone will have the average punter taking out a second mortgage. Then there’s wear and tear, bumper to bumper traffic, scorching temperatures and the lads and lasses in blue.

Getting to all the choice events is so much easier if you’ve got a truck but turning up in a Hino isn’t exactly stylish. Sure, it’ll get you from A to B but you won’t want to be seen driving it.

Mitch Reinders has found the answer to his transport problems with this ’36 Chev. With its tilt bed and airbag suspension, even the lowest rides have no trouble climbing aboard. And he won’t have to wear a paper bag at the wheel.

He found the old Chevy a few years back while he was finishing his green FC wagon (SM, Dec ’09).

“It used to be a bushfire tanker in Melbourne somewhere,” he says. “When I bought it, it still had the bushfire logos on the doors.”

He’d already purchased another ’36 truck that was missing its chassis, so he had plenty of panels to mix and match.

The pick-up idea gave way to a flatbed, before finally settling on a transporter. The 5.8-metre tilting bed and 12,000lb winch make loading cars easier

“I picked out the best guards, doors, bonnet and grille to make the best truck. I had in mind to make a pick-up of it; that was my first plan.”

But plans can change and in this case they changed a lot. The pick-up idea gave way to a flatbed for his display building business. Then that idea fell by the wayside too.

“I thought: ‘Hmmm, might be an idea to make a car carrier out of it, then I can actually carry my own cars with it.’” Any car enthusiast knows the value of a good truck or trailer.

Never mind the show car, check out the transporter

As with his FC wagon, a lot of the heavy-duty modifications were handled by Greg ‘Beach’ Ball at Pro Street Restorations. He started with the roof chop because Mitch hadn’t settled on whether the ’36 was going to be a pick-up, a flatbed or a transporter. In the end he took a whopping five inches out of the roofline.

Beach also set about boxing the chassis, adding extra bracing where it was needed. During the flatbed phase he also fitted a four-link set-up, which was going to run two pairs of coil-over shocks. However, with the switch to the transporter plan they realised that not only were the coil-overs not going to handle the weight, but that they’d also need a second axle. So a second nine-inch was purchased and installed into its own four-link, complete with truck-spec airbags. The second diff doesn’t drive; the crown wheel has been removed, so it’s just there for load bearing duties.

Up front you’ll find a Gen VI 454ci big-block that Mitch bought as a crate motor, and he’s damn glad he decided to buy locally.

When they fired the beast up, it suffered some massive vibration issues; things didn’t look good at all. Turns out the problem wasn’t so much the motor as the accessories Mitch had bought, with many shops assuming that one big-block is the same as another.

“That was my own fault for listening to ‘experts’ who aren’t really experts.”

The vibration issue was solved when he called the place where he bought the motor — he was using the wrong balancer and torque converter; adding the correct ones had it running as smooth as silk.

“It’s mostly stock — we put another cam in to give it a bit more torque, that’s all,” he says.He also added an Edelbrock intake to run two Barry Grant carbs left over from the FC build. Trouble was, when the intake arrived, the BGs wouldn’t fit; the dual quad intake was designed to run Edelbrocks only, something the salesman forgot to mention when he took Mitch’s dollars. And of course you won’t find off-the-shelf headers for a big-block into a ’36 Chev, so Mitch had Brookvale Automotive whip some up, which were then Jet Hot coated. Brookvale also built the tilt bed.

Just as with the FC, Mitch handled the bodywork and paint.

“Greg did the heavy metalwork and I did the panel beating, bogging, and painting. I painted it in my cabinet-making workshop, same as I did the wagon. The truck was my first attempt at two-pack.”

Business is always slow over Christmas, so he locked himself in the shed and didn’t come out until the job was done.

“It took me exactly 22 days, from the time I started welding rust to the time I finished painting,” he says. “I had to have it done before I went back to work.” 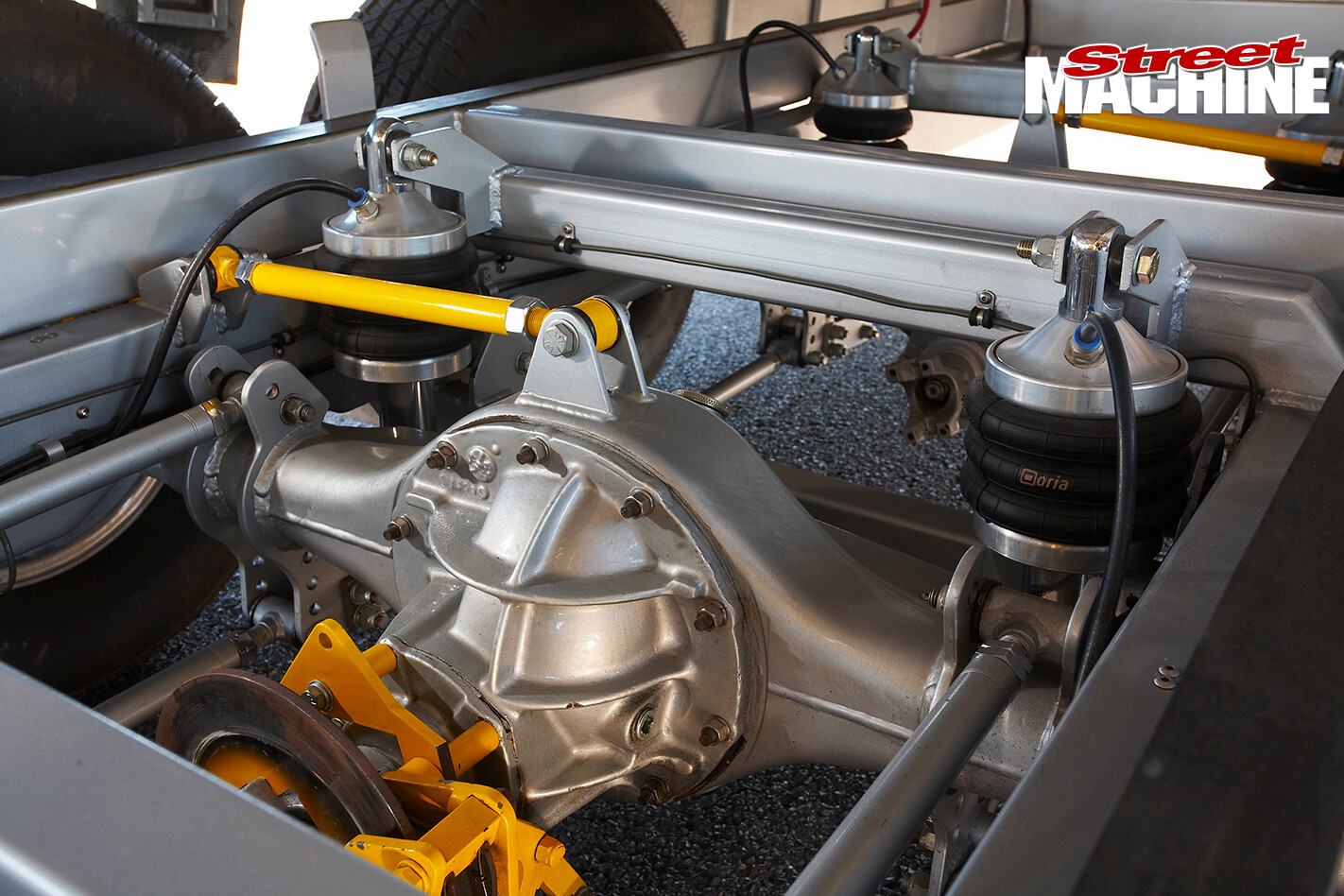 It’s certainly been worth the effort; the old Chev stands out from the crowd and Mitch has been stunned by the reactions it provokes.

“Driving down the street, it’s amazing. Young girls and little kids point at it, old guys driving past wind their windows down and say: ‘Beautiful truck, mate.’ It’s just something that you never see, and the colour stands out a mile.”

With the torque of the big-block and a modified Mitsubishi L300 front end, the extended Chev is a breeze to drive, although Mitch had to tweak one thing straight away.

Under the tray it's fairly busy, with a stainless steel tank for the air suspension (front), a plug 'n' play compressor and two tanks for the hydraulic rams

“It only took me two corners to realise I needed power steering,” he laughs. “I’d be driving down the street, and a corner would come up, and I’d be like: ‘Shit! How am I going to get around this?’”

He’s also discovered it isn’t the vehicle you’d choose to drive around Australia.

“It’s a bit cramped. We started to build it as a pick-up and sat the motor back about 12 inches for better weight distribution, so it’s a bit tight on the inside. There’s not enough room for a big trip but it looks good, that’s the main thing.”

He reckons he’s spent enough on cars but there’s a WB Statesman waiting for his attention. He’s adamant that won’t become a multi-year project like the FC and this truck.

“I’ve wasted enough money on cars; I need to smarten up. I’m lucky I don’t have a wife. If I did, I don’t think I’d have any cars.”