LOOK AROUND. How many good EK FB Holdens do you see? None? A few? Too few, we reckon. That’s what Andy Fenech reckoned in 1977 when he bought his.

As a matter of interest, you’ll find plenty of EK/FB Holdens about with really strong street machine potential. Why? Because it was the first of Holden’s acrylic-paint cars and The General wasn’t too sure how to apply the new paint, so the engineers erred on the side of safety and applied a lot more of it than usual. How do we know this? An old Holden engineer once confessed the mistake. 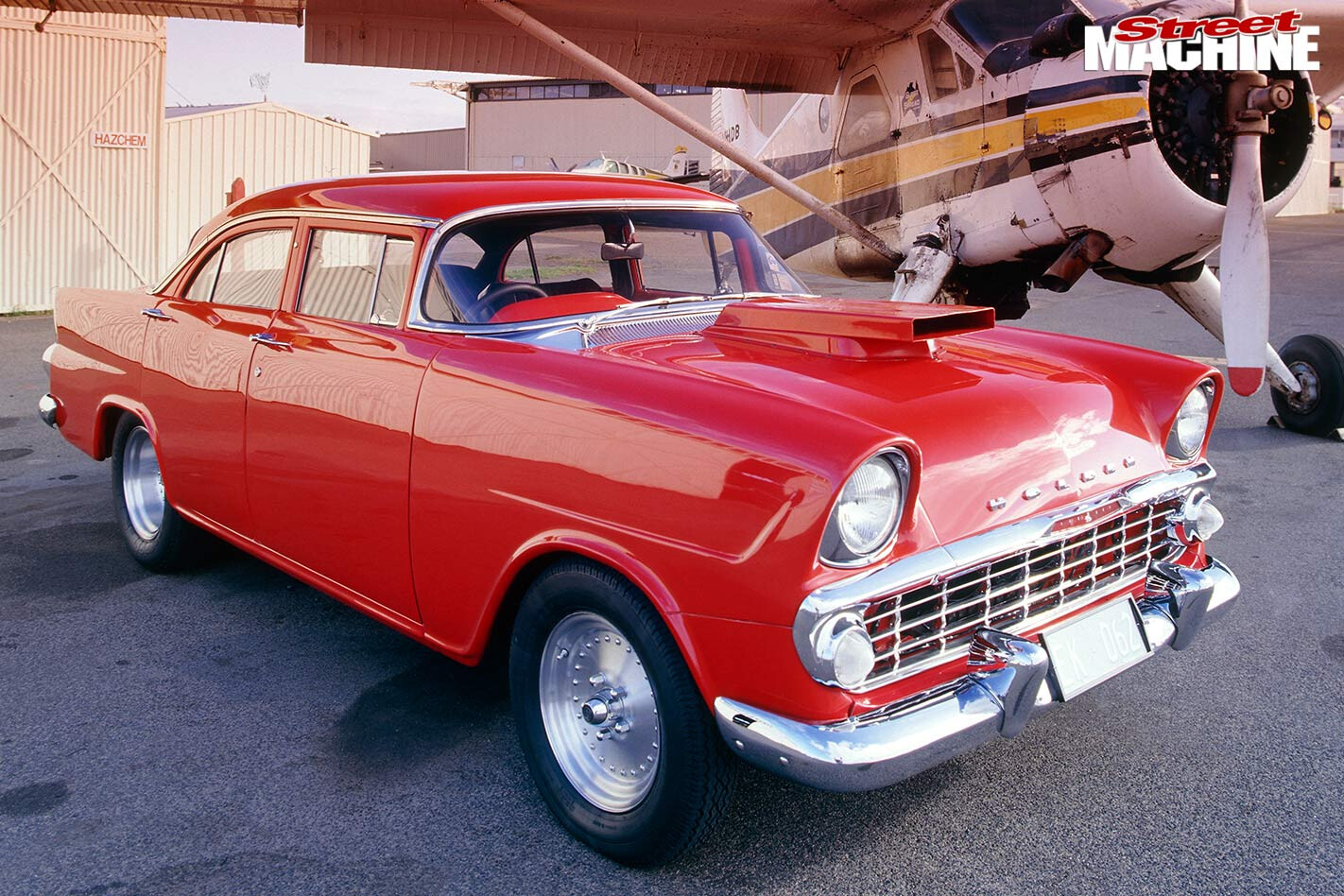 Apart from a few obvious areas, the EK/FB model range is usually in very good shape – bodywise – and responds well to restoration. The obvious spots to check are doors, the rear edge of the front guards, the eyebrow over the headlights (which rust from the inside) and the lower edge of the rear window. Now, go forth and buy!

Back to Andy Fenech. He was just 16 when he found this really clean example and decided to take advantage of its double potential. Firstly, the car was clean and strong with little rust in structural areas. That made it a walk-up success for a fair bit of grunt without breaking the bodyframe. Secondly, nobody Andy knew was working over an EK so the car would have a scarcity factor of nine.

This particular EK had something else going for it. Andy may have been young, but when he started work on the car he’d just started a job as a motor mechanic specialising in engines. The car took two years and several changes of direction. This EK grew with its owner, gradually getting bigger, stronger and gaining more experience of life. 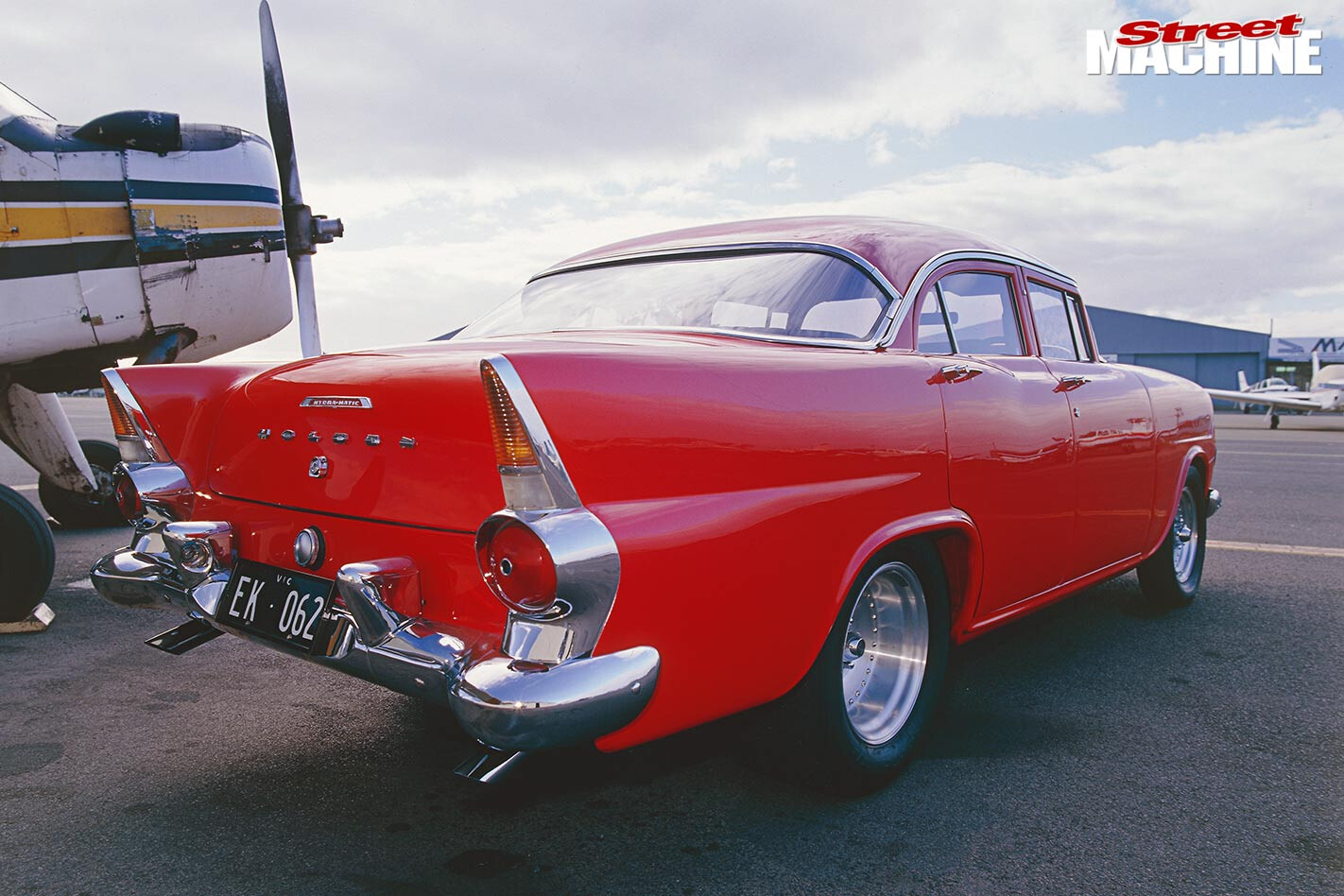 Nearly 10 years down the track, it’s a refined and potent car, with enough performance to justify the ladder bars and sliders peeking out from underneath. Take a more careful look and you’ll also notice that the rear end runs a short-haul ratio nine-incher with disc brakes. A standard 28-spline rear axle is used.

Up front, standard HQ discs complete the stopper package. Lowered and stiffened Pedders springs keep the front off the ground and a pair of 90/10 shockers give the car traction when grunt meets ground.

Take the hint? Any car that’s been made to stop should be able to go. This one can, but Andy doesn’t run it at the drags any more. One thing he’s discovered in his years as an engine builder at V&A Engines is that the 350 Chevy mill is a great starting point for a street-wise engine. It’s tough, reliable and will run almost any spec you want because there’s a wealth of trick gear available. But Andy has also seen wild motors come to grief on the street. Muscle-bound engines with compression as tough as diesels and cams like Harry’s Cafe de Wheels (open all day) become tiresome and irritable. Especially when they’re on the street in queues with Corollas and mindless Mazdas carrying the lobotomised masses to and from work. It’s a bit like condemning Rambo to the job of folding hankies in the local bridal-wear shop.

Andy chose the more practical approach. He selected a good 350 and gave it a complete rebuild, sticking closely to original specs. He figured (rightly) that the combination of a fairly light EK body and a fairly straight 350 would give him bags of performance with docile manners and reliability in day-to-day traffic.

But this engine didn’t get just any old rebuild. It was worked by someone training to become one of the professionals at V&A, so the engine was rebuilt right. Everything was balanced, measured and reassembled with care and attention that took so many hours it would’ve cost a fortune at retail. The bore is out 30 thou, but apart from that the motor is stock and sweet. Of course the heads have been worked and an Edelbrock Performer squats beneath a Holley 650.

The headers were privately done – you don’t get headers like these at your corner Repco shop. And Andy’s mate Noel worked up an ignition package to keep the engine running when the traffic got tough. It runs Ignition Development Systems Bathurst twin points and twin coils for faultless top-end performance.

A Turbo 400 swaps ratios and drops the power on the nine-incher. It has a shift kit and a massive 3500rpm stall converter as a reminder of its days at the drags. At 3500rpm, the converter locks up midway between peak torque and peak power.

Need another hint about this car’s heritage? Take a look at the wheels and tyres. Up back are 15x12 Center Lines with Radial T/As. But at the front is a pair of 15x3 Center Lines – just like a good straight-line runner should have.

As this car has been in the family a while, it’s some considerable time since the body was done – yet it looks as though it was finished yesterday. JD Custom Bodywork carried out the visible changes and applied the colour. Would you believe that was back in 1982? Brock and Perkins won Bathurst in their VH that year, Spielberg’s E.T.: The Extra-Terrestrial was blitzing the box office and Gloria by Laura Branigan was topping the sound charts.

Looking inside now we see that, like the underbonnet, the interior is fairly straight. Chipper did the velour inserts on the black vinyl Torana buckets and the dash is standard but for the tacho. The buckets have been completely rebuilt so they offer good support and comfort.

When the EK was in its heyday, the car radio was called a ‘wireless’. Perhaps they should’ve been called a ‘screwloose’ because they sounded pretty dreadful! Andy upgraded, using an Australian-designed Eurovox.

Down in Melbourne there’s a top guy and radio engineer called Klaus Schuhan. He’s been a radio engineer all his life and designs Eurovox for Australian conditions. Andy says he’s made a good choice with his Eurovox.

And in case you’re interested, Andy Fenech says he’s no direct relation to Jeff Fenech, Australia’s dual world champion boxer. But he does say: “I follow all his events – after all, he’s family somewhere along the line.”

Knock-out king Jeff and Andy’s hard-hitting EK have one thing in common: They’re both winners.

Cool info: Looking at the paint job you’d be thinking she was sprayed less than five years prior. Try back in 1982!