PERTH-based Chrysler stalwart Dino Donatelli fell in love at an early age. “My late father, Beniamino, owned a Dodge D5N pick-up when I was a kid, and that, along with his VG Safari wagon, were the two cars that instilled my love of Chryslers,” he says. “The passion is definitely in the blood.” 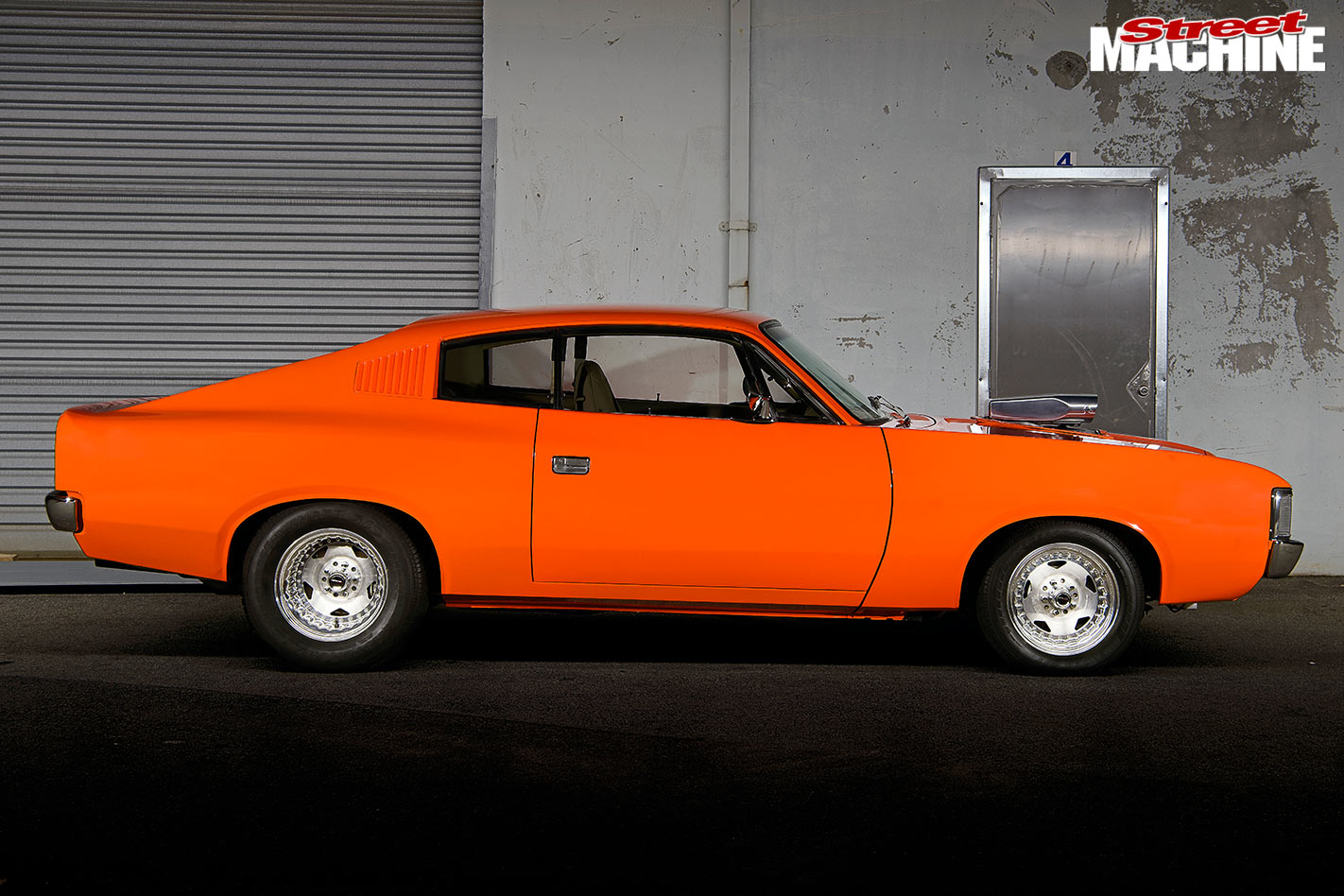 Like any Mopar devotee, Dino is well-versed in the history of the Hemi engine, and he’s equally knowledgeable and passionate about Aussie-built Chryslers. So when it was time for a new project, Dino decided to go for a mix of local and American Mopar gear. 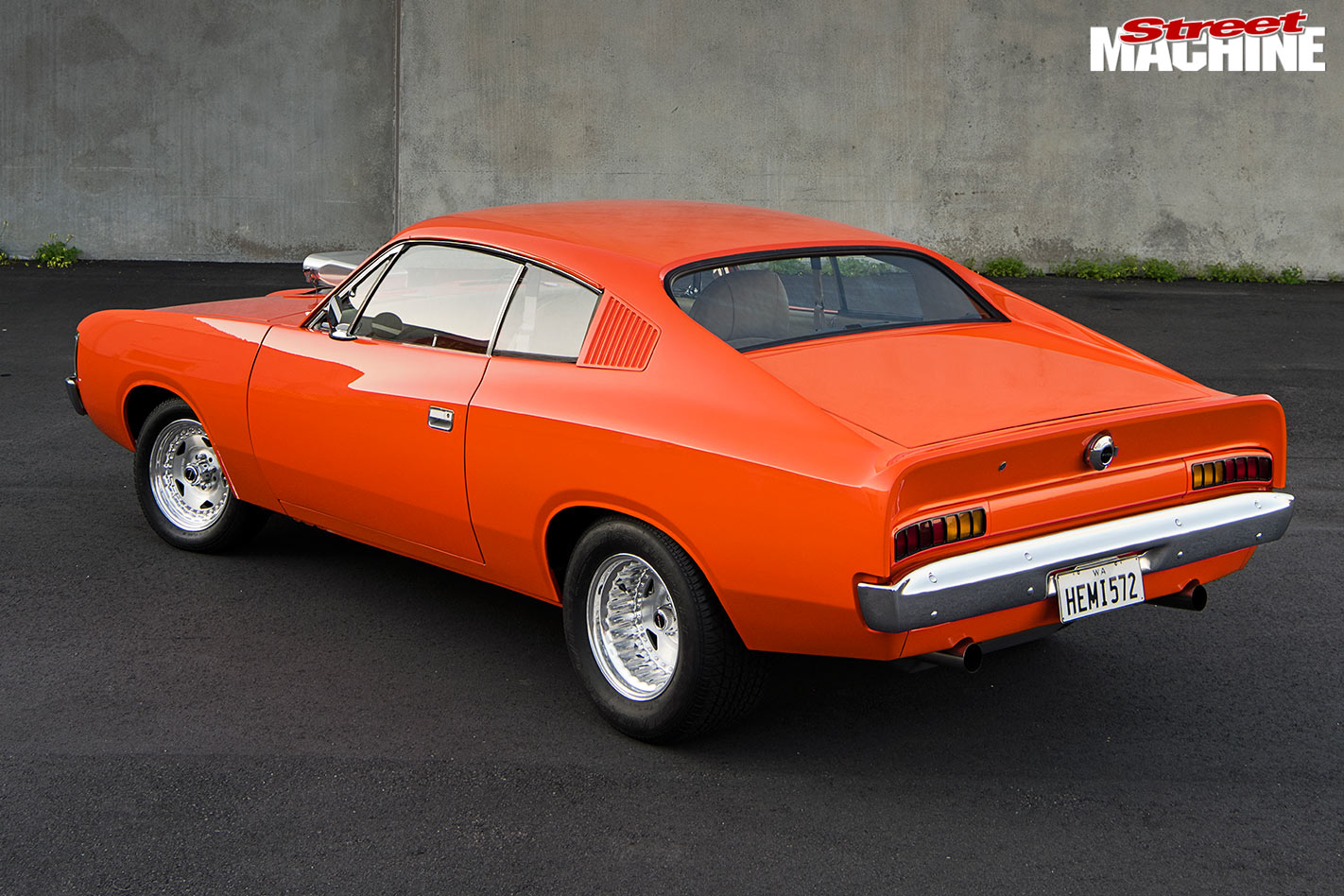 Western Australia is home to some of our toughest Chargers – Cassie Rhodes’s VJ and John Faraone’s VH spring to mind – and Dino’s orange beauty continues this tradition. “I just love Chryslers, and Hemis are at the top of the food chain,” he says. “Everyone loves a Hemi. I’ll pull into a servo, people will see the HEMI572 plates and say: ‘You’re kidding me, aren’t you?’”

“About 10 years ago, I’d finished my VG Mexicana hardtop (SM, Mar ’13) and was keen to follow that up with a Charger,” he explains. “I hunted around and found a 318-powered VH in Victoria on moparmarket.com, so had it shipped west and hatched a plan for its build.” 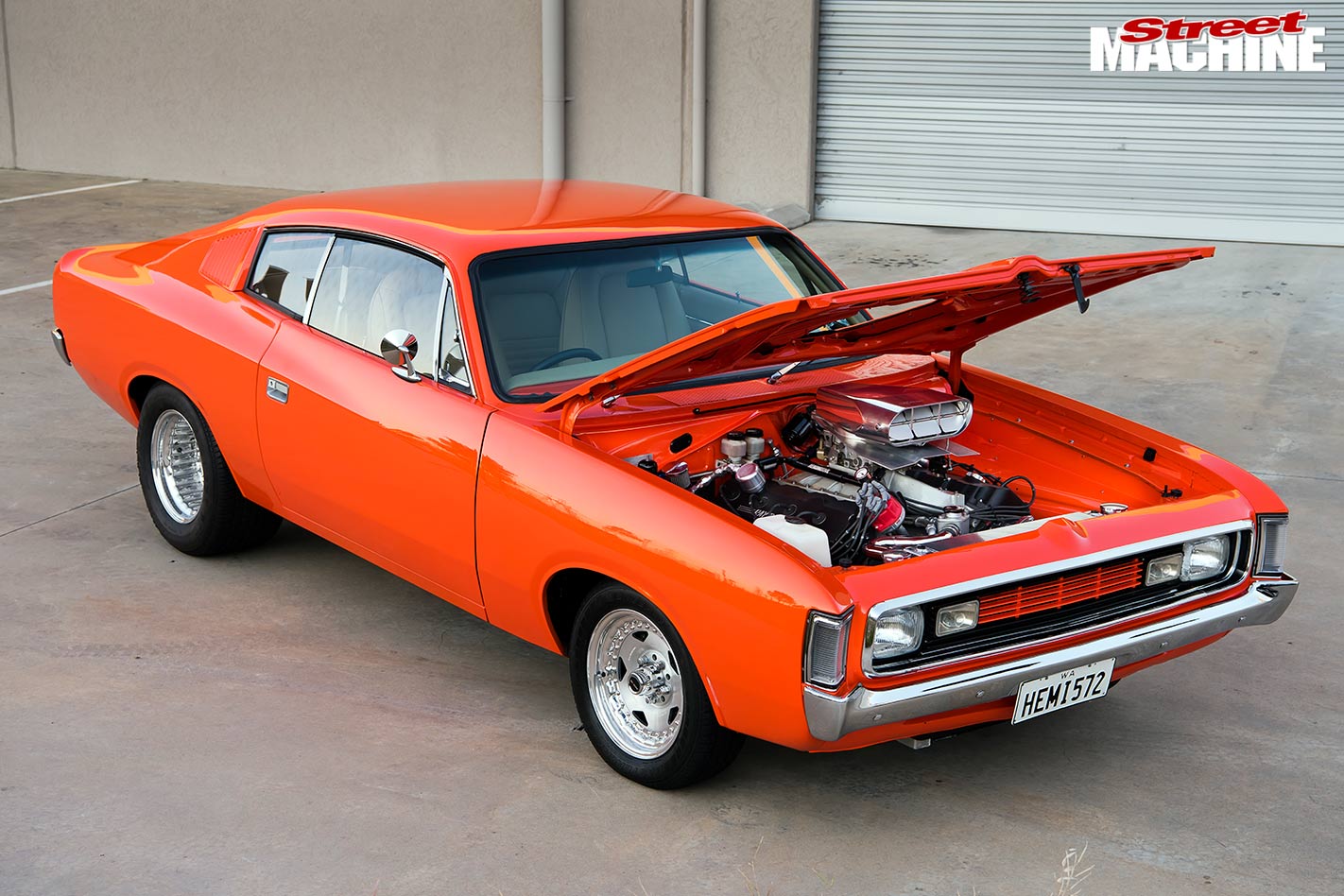 Unsurprisingly, Dino retains a hard-line stance in regards to the old ‘Mopar or no car’ adage, but he wanted more power than the factory V8 could deliver. The most logical way to up the ante was to go Hemi power. Of course, local Chargers are famous for running Hemi engines, but they were the Aussie-only six-cylinder variant; Dino had his heart set on a true American Hemi V8.

The mega-headed donk is, of course, the stuff of legend on streets, strips, oval tracks, and even on the water – heck, they were chosen to power air-raid sirens, too! They’ve been offered in a range of cubic sizes both from Mother Mopar and the aftermarket, the latter being a wise choice with the age of original cores nowadays. And those elephant rocker covers: If there was ever one mechanical component to represent the term ‘nuff said’, they are it! 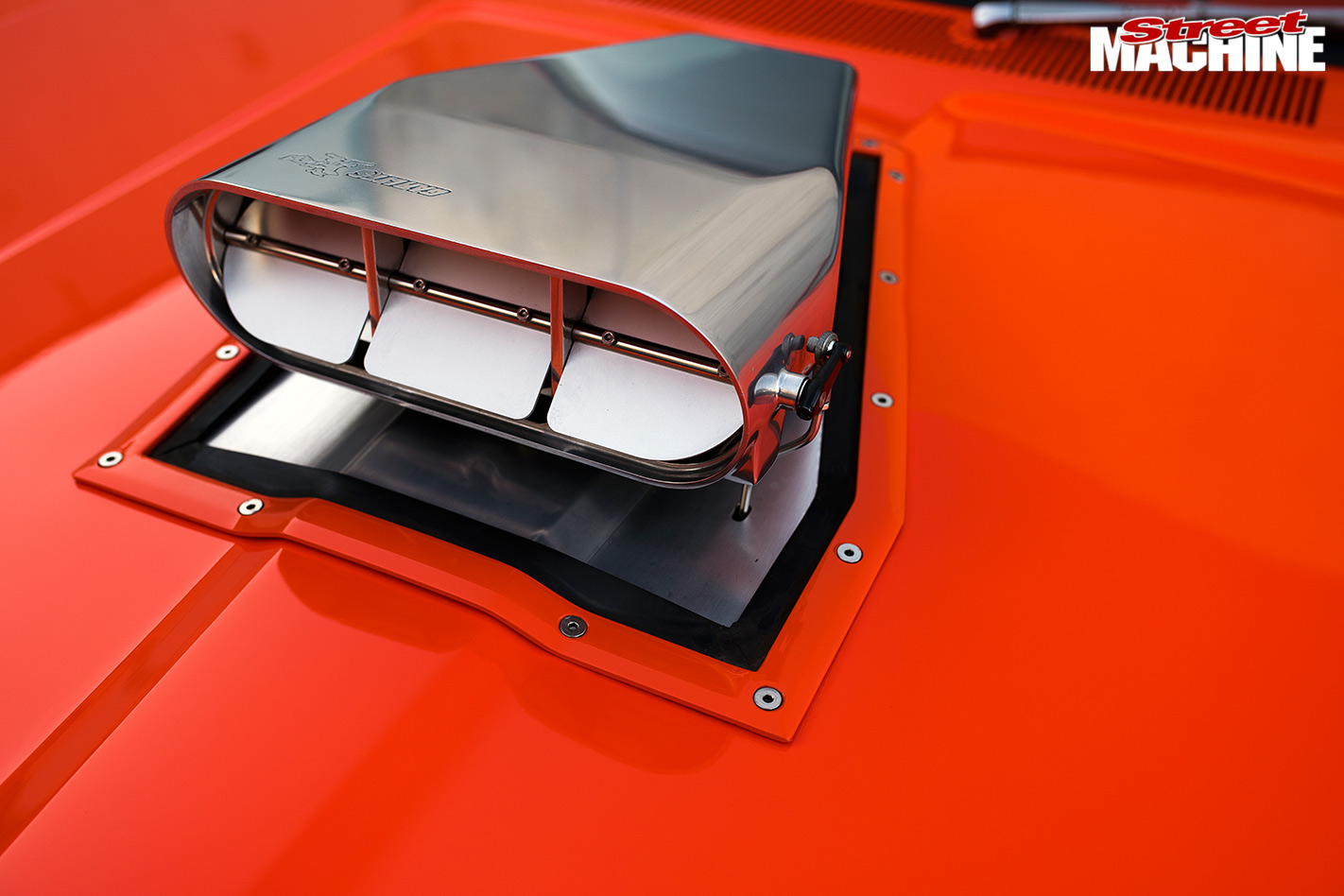 The Garlits Streetcatcher scoop is a nod to the Hemi’s dominance in Top Fuel racing, but is proving restrictive and will soon be replaced. “I’ll be fitting a reversecowl scoop of some description that will allow me to run a much larger air cleaner and help make it more street-friendly,” Dino says

Dino started shopping around for his drem powerplant and wound up in the capable hands of Hemi-building gurus Ray Barton Racing Engines out of Pennsylvania. But Dino didn’t just choose a legendary donk and then leave it stock – although, let’s be honest, a factory 392 or 426 is no shrinking violet. No, he decided to have the team at Bartons step things up.

“I was originally interested in their 528-cube combination, but they had a special going on the 572; it was a no-brainer, of course, so I ran with that,” Dino laughs. 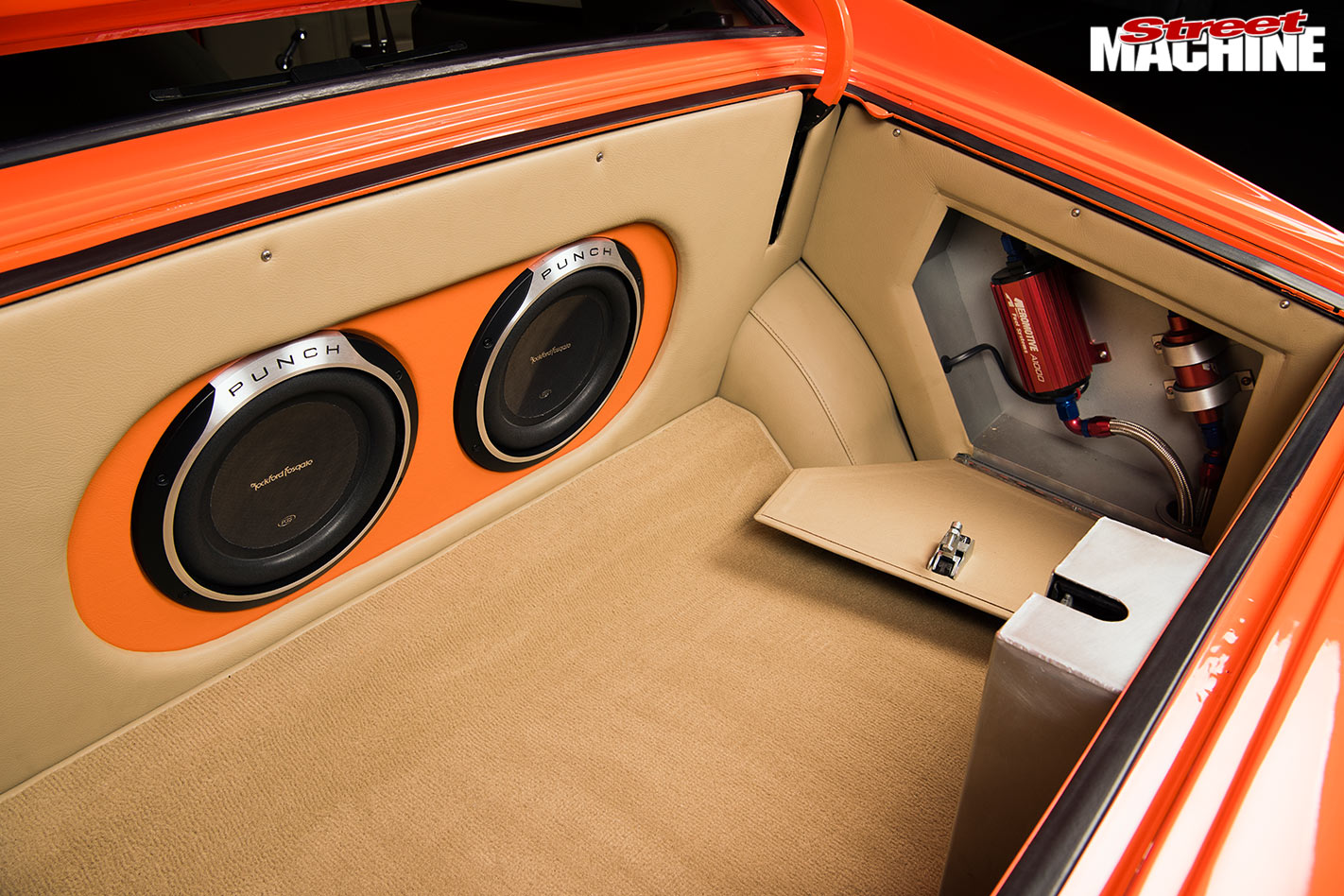 The World Products aluminium block has been stretched to this capacity by way of a steel stroker crank swinging Oliver H-beam rods topped with Diamond forged pistons – the matching 4.500/4.500-inch bore and stroke creating a ‘square’ reciprocating assembly. A Melling high-volume pump and Alloy Engineering custom sump sort the good oil and allow this behemoth to nestle into the comparatively compact VH engine bay.

A solid-roller camshaft with specs on a need-to-know basis send directions north to a pair of Ray Barton Stage V alloy cylinder heads, which are topped with a 1250cfm Holley Dominator carb that sits on a Barton intake. 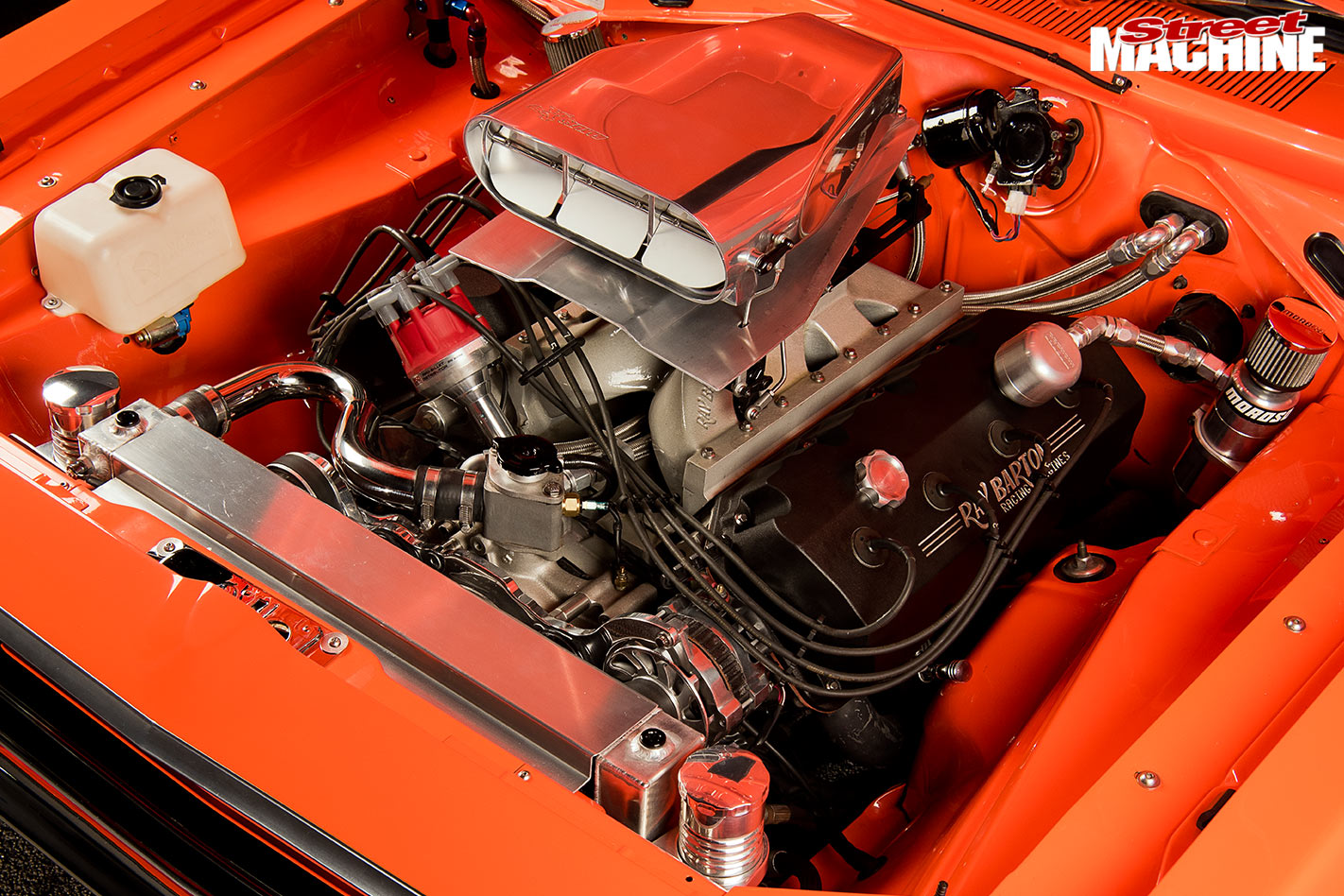 Elephantiasis of the donk – old-school Hemi V8s and their generously massive head castings take no prisoners when it comes to fitment in an A-body engine bay, requiring the relocation of the master cylinder inboard, a custom alloy sump and brainteaser-spec extractors. When we asked Dino about horsepower figures from the 572, his reply was simply: “Plenty.” And we believe him!

Prestige Exhaust & Mufflers in Malaga had the unenviable task of fabricating a set of straws to snake their way between this oversized donk and restrictive A-body engine bay. They handled this and a matching twin 3.5-inch exhaust system with a minimum of fuss.

Alloy Engineering was again called upon, this time to fabricate a custom aluminium radiator to cool the mega-donk, while combustion chambers of that size are ably fired by a brace of MSD ignition componentry. 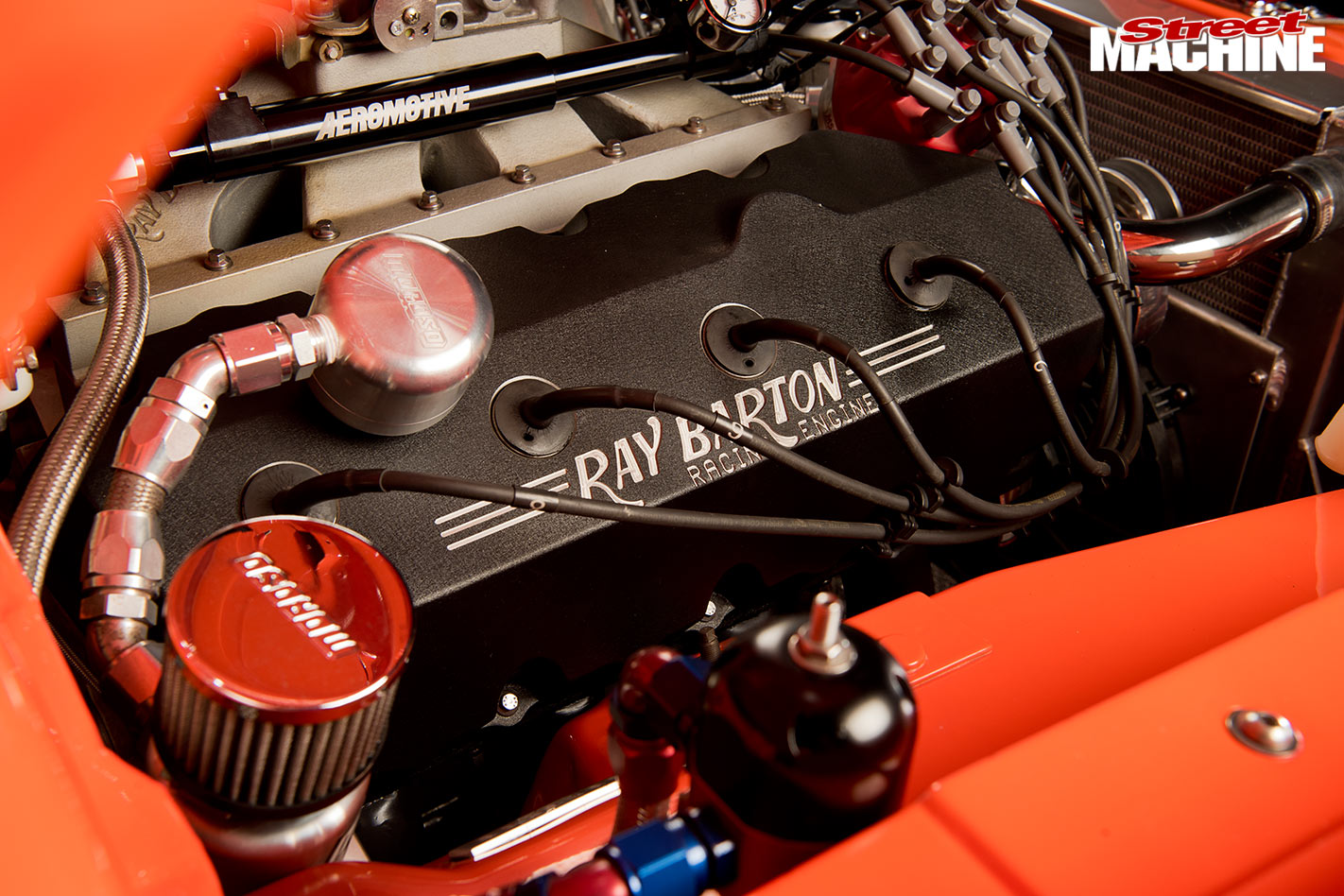 Allfast Torque Converters supplied a complete transmission package, including a 727 Torqueflite automatic packing a reversepattern valvebody and all the fruit, before fronting it with one of its own eight-inch 5000- stall units. The chrome-moly four-inch tailshaft twirls its way back to a nine-inch diff sporting a Truetrac centre and 3.9:1 gears.

Dino felt it best to stick with the torsion bar suspension set-up found on Hemi-spec US Mopars; however, heavier-duty torsion bars and Bilstein shocks were chosen to uprate the front. The rear was also fitted with new Bilsteins, with Westralia leaf springs relocated four inches inboard for increased tyre space.

Braking was improved for safety, with a full complement of Hoppers Stoppers disc and caliper packages used front and rear, while an underdash master cylinder was chosen to free up more engine room and smarten the engine bay visuals. A power rack ’n’ pinion steering conversion is another double whammy that improves both drivability and engine clearance. Center Line Convo Pro rims add some exterior bling, their six- and 10-inch widths wrapped in 195/50 and generous 295/50 rubber respectively. 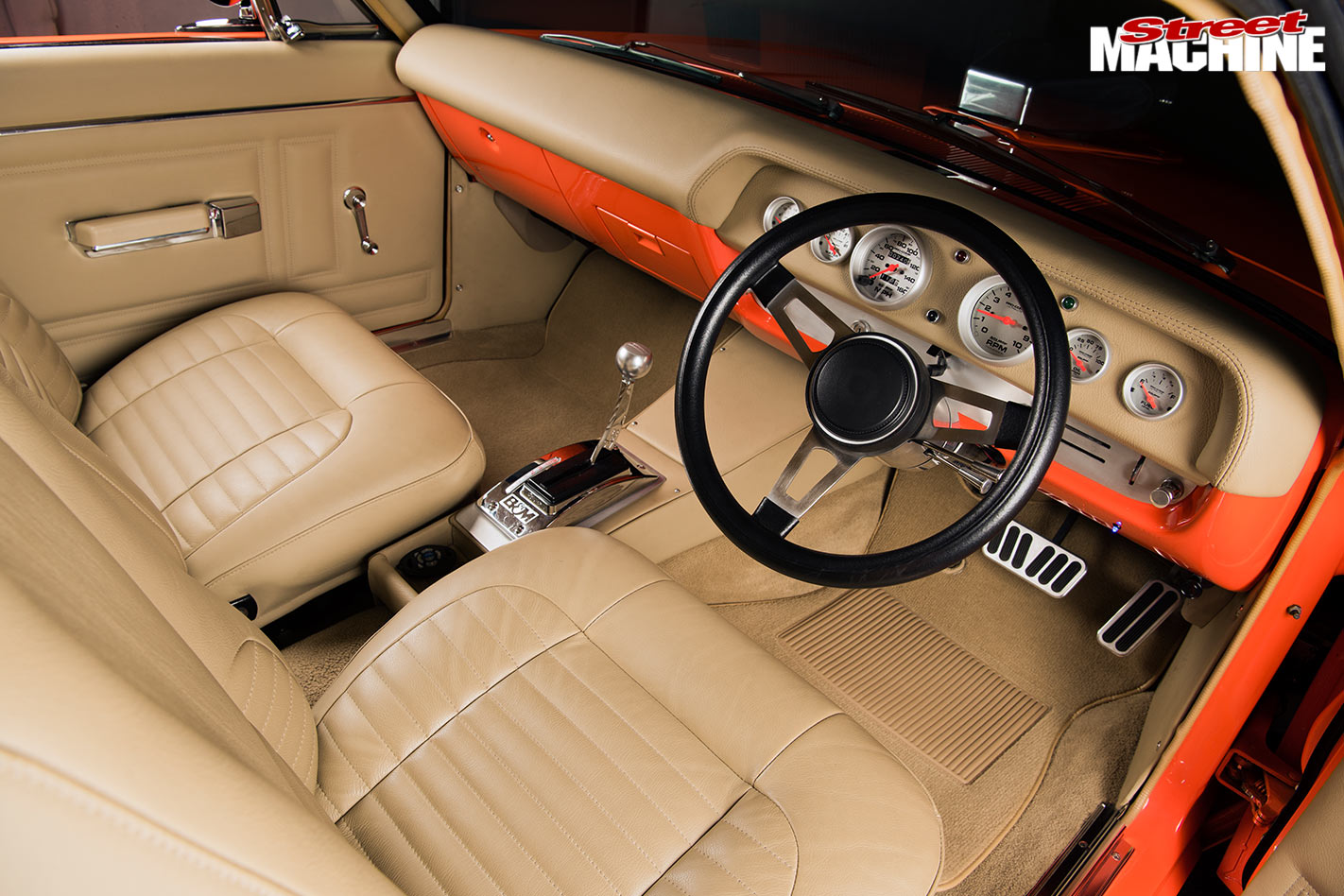 “Leather everywhere, including the headlining,” were Dino’s instructions to the team at Scott’s Trimming Service. “And they delivered, using nearly 15 hides in the process,” he says

Dino says the car was “a good runner” when first purchased, but the body was in need of some love. The team at Extreme Panel & Paint were called on to weave their magic, actioning any body repairs – while shaving any superfluous badging and chrome in the process – before laying down a custom orange hue that pays homage to the local Charger’s glory days.

The interior is just as clean and refined as the exterior. Keen to modernise the factory feel without rewriting history, Dino employed Scott’s Trimming Service to reupholster the factory pews, headlining and adjacent dash and door surfaces in tan Italian leather, with matching carpet. The inside is set off by the non-factory application of the exterior orange to the metal surfaces. 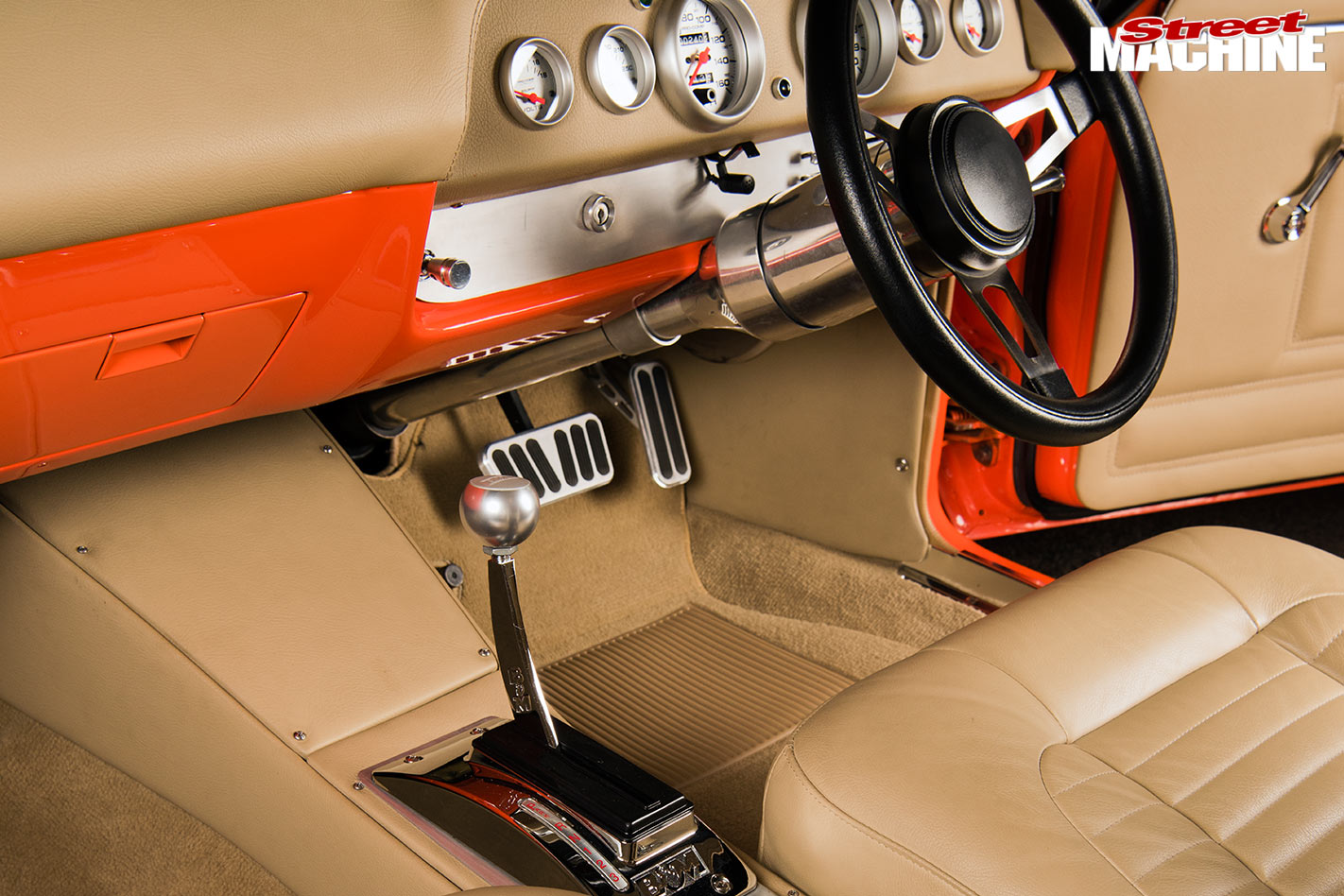 The factory seats, dashpad and door trims have been gloriously reupholstered in delicious tan, while a custom console and gauge fascia, along with a Billet Specialties steering column, separate this interior from the usual R/T stylings

A B&M shifter is housed in a custom floor console, while a Grant wheel and Billet Specialties steering column are refreshing points of difference to the many normally restored Charger interiors so often found around the traps. Auto Meter gauges in a custom fascia are a neat touch and tie in nicely to the refined pedal treatment.

Where many car aficionados choose to build for show scene glory or results at the strip, Dino is happy just to enjoy the fruits of his labour. 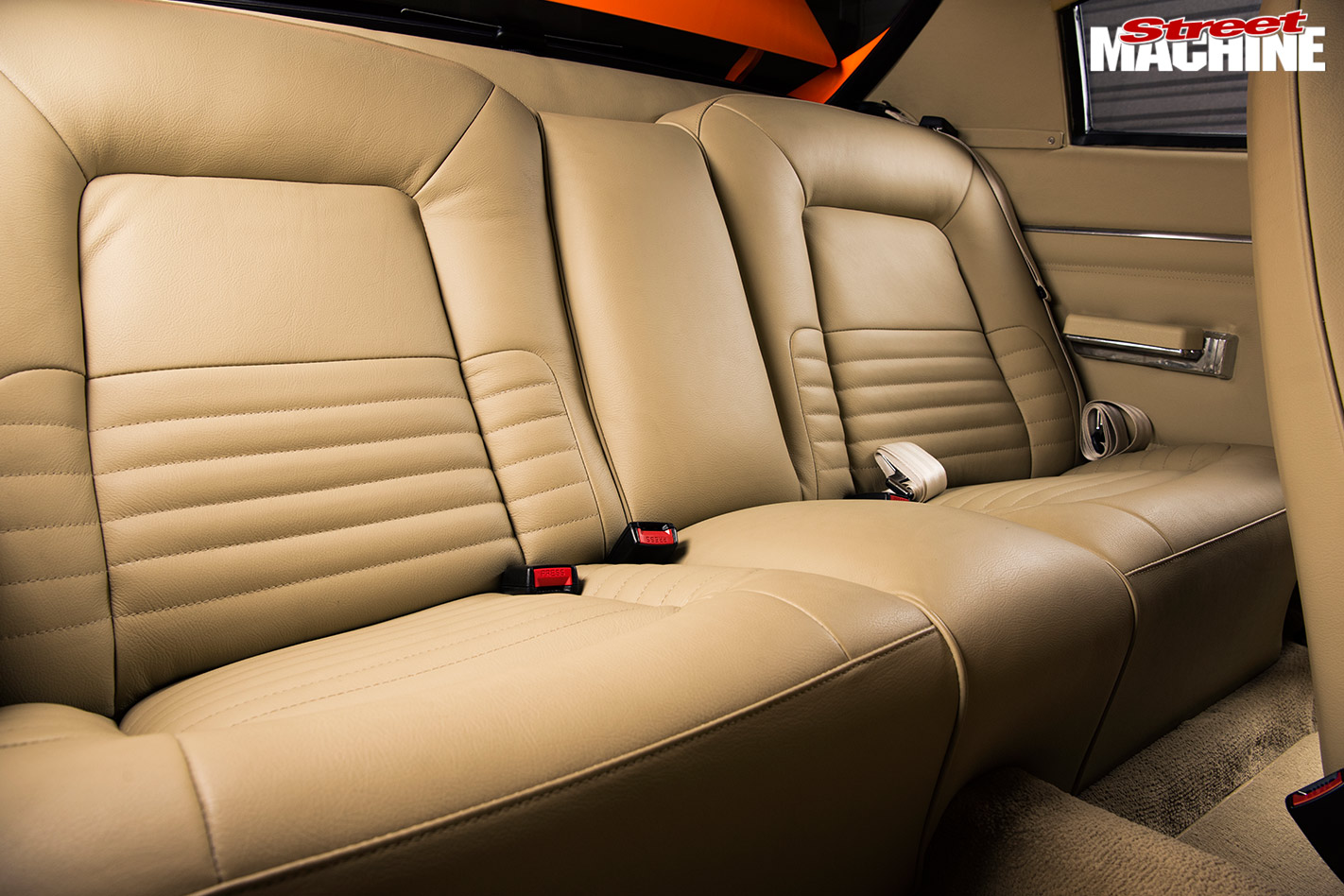 “I’ve never taken it to a car show or run it at the drags; I just love looking at the car, hearing the Hemi fire up, and enjoying time behind the wheel,” he says. “The10-year build was long and painful, and spread across a number of workshops – not all good experiences, either – but in the end I was lucky to find some professional tradespeople to finish the car off.”

Even with some less-than-desirable hiccups throughout this build, Dino’s love of Mopars hasn’t waned one bit. His current project is a Whipple-blown Dodge D5N pick-up running a 6.4-litre Hemi from a 300C Chrysler SRT – that’ll be a fitting tribute to his father, who made the introduction that started this love affair so many years ago.