SOMETIMES it’s nice to dream. The US-based Ramchargers were a group of Chrysler engineers that campaigned a string of drag cars back in the day – all with the blessing of Mother Mopar – so imagine if Chrysler Australia had the coin and interest to have supported something similar here? A factory-backed Charger would have been a serious crowd-pleaser at any Aussie track in the 70s, and one look at Peter Selby’s E55 Charger is enough to make you dream of what could have been. 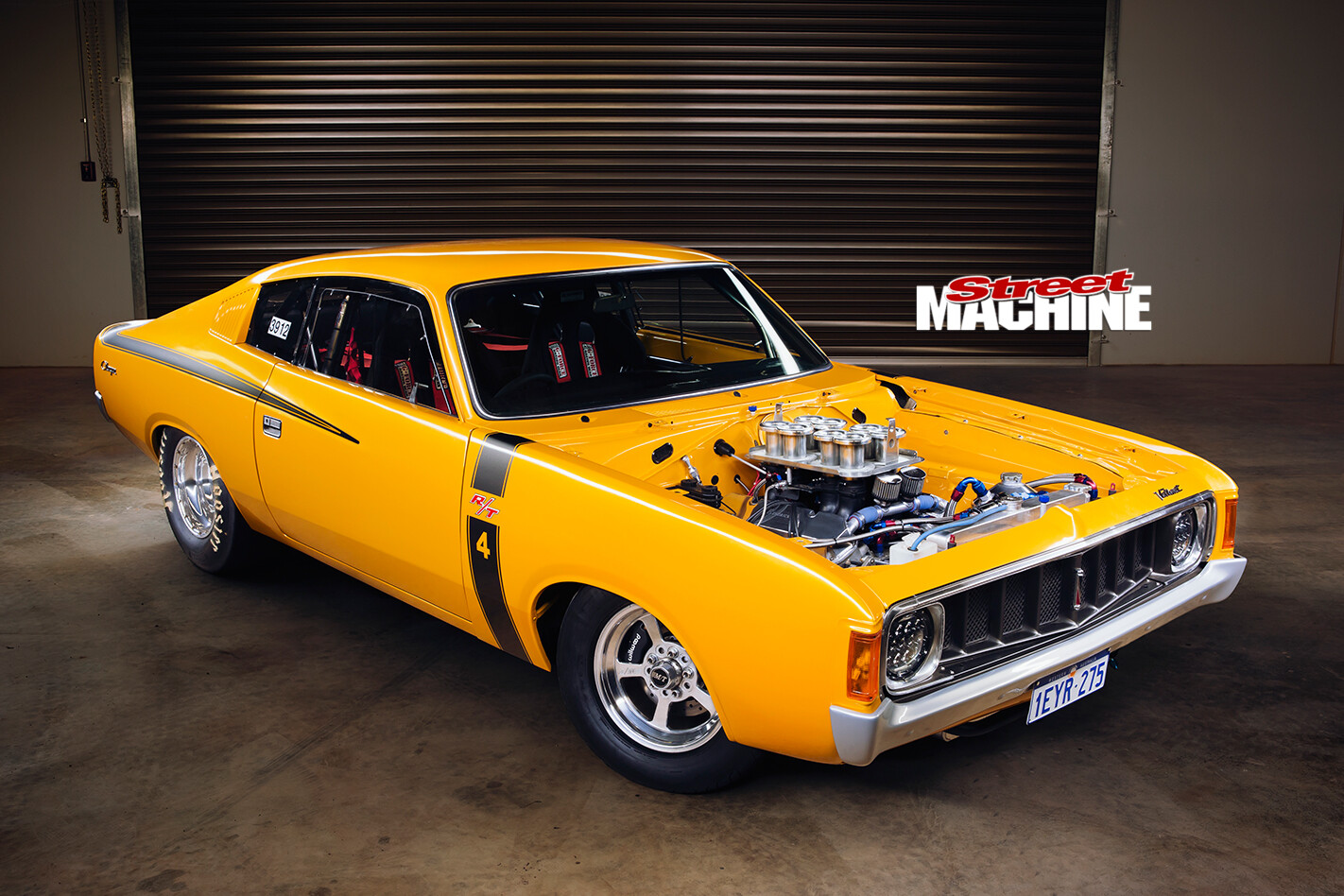 “I liked the idea of building a Charger for drag racing using Chrysler Australia’s styling efforts for that time,” Peter explains. “Their circuit racing history is well documented, so I just adapted the R/T program to the quarter-mile.”

Peter has of course made some concessions to modern technology and safety, but the general visuals of the car and use of small-block power is right in line with 340 concepts penned before the 70s ‘supercar scare’ spoilt all the fun. 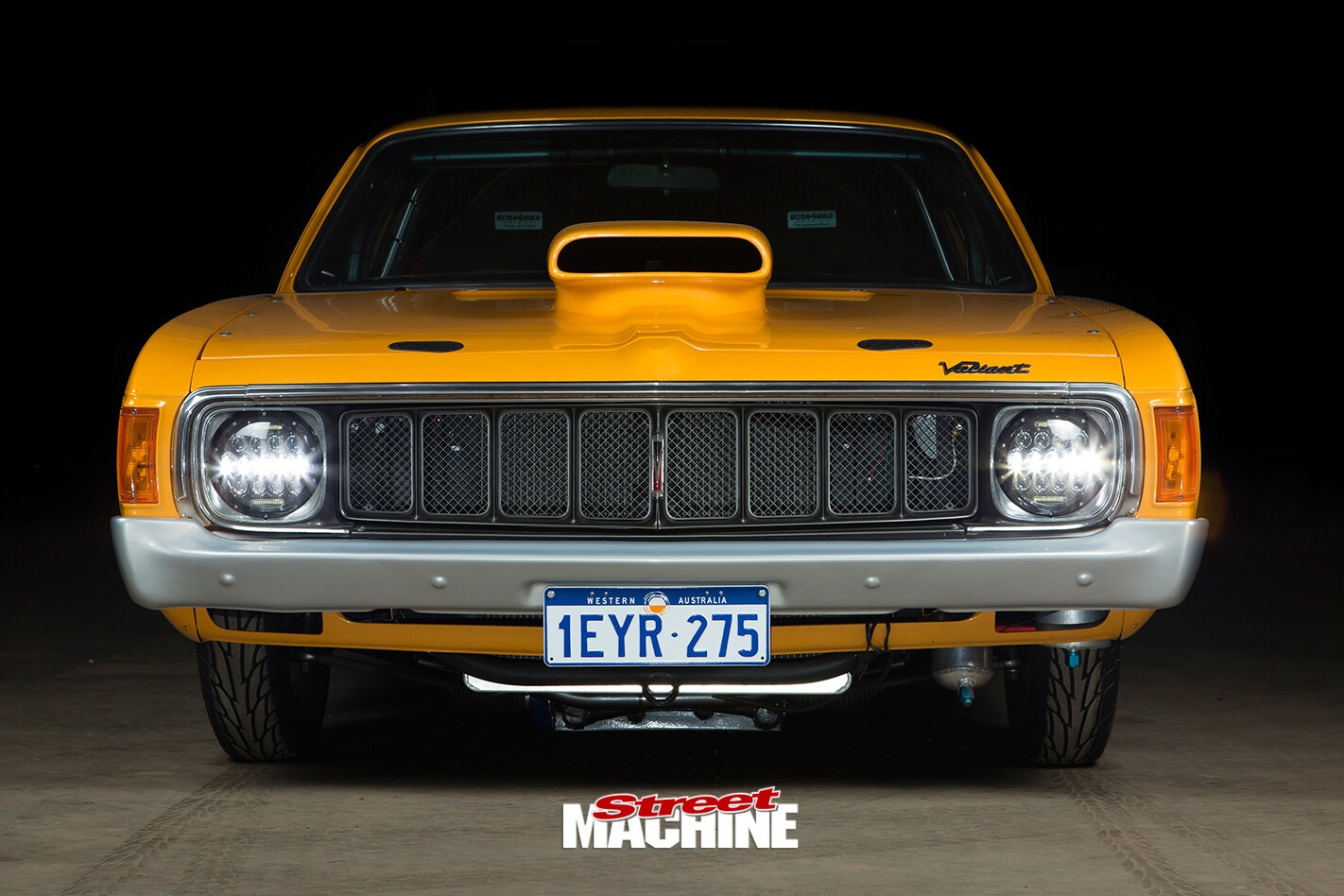 “In my early years I was a Holden man,” he says. “I love hot six-cylinders and owned triple-Webered Toranas and even a turbocharged FJ. But about 18 years ago I went looking for a GTR and came home with a six-pack E48 Charger. It was something different, but I knew Hemi engines could make awesome power and it was still a six-cylinder, so it sparked my interest.” 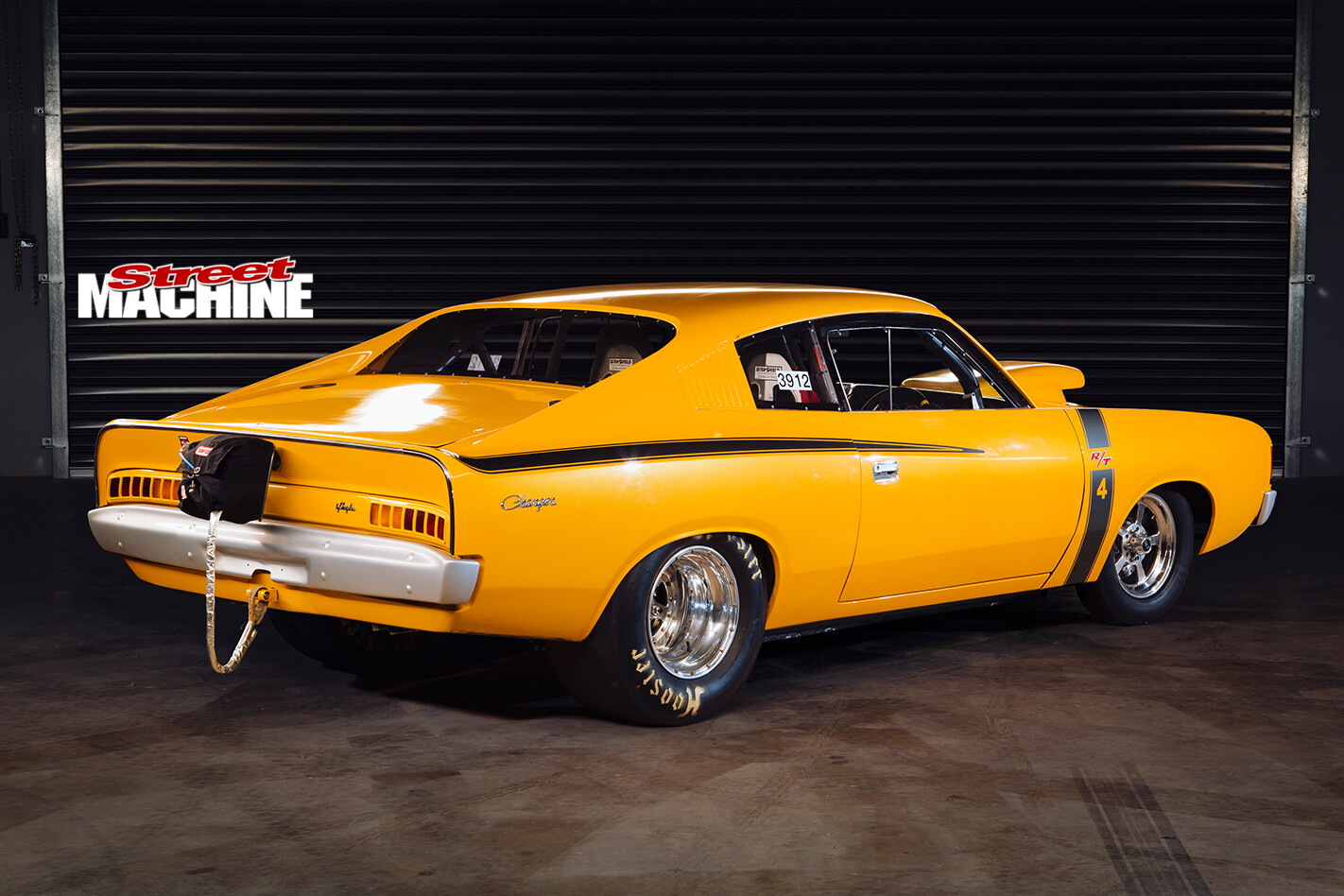 A few years later – and now firmly hooked on Chryslers – Peter was keen to build a dedicated race car and found this genuine E55 in country WA. “It had been parked for two decades, but was a complete matching-numbers car, needing a full resto. This Charger was my first V8 and I was keen to put the ‘factory’ drag car plan into action: It needed to look ‘street’ but be light and conform to the safety aspect of racing. “Geoff Kendrick from Kendrick Racing Engines is a speedway guru who taught me to compare the advantages and disadvantages of many parts in an effort to balance reliability with lightness,” he continues. “And not just for the engine either; his advice has been instrumental throughout the entire build and I cannot speak highly enough of his work.” 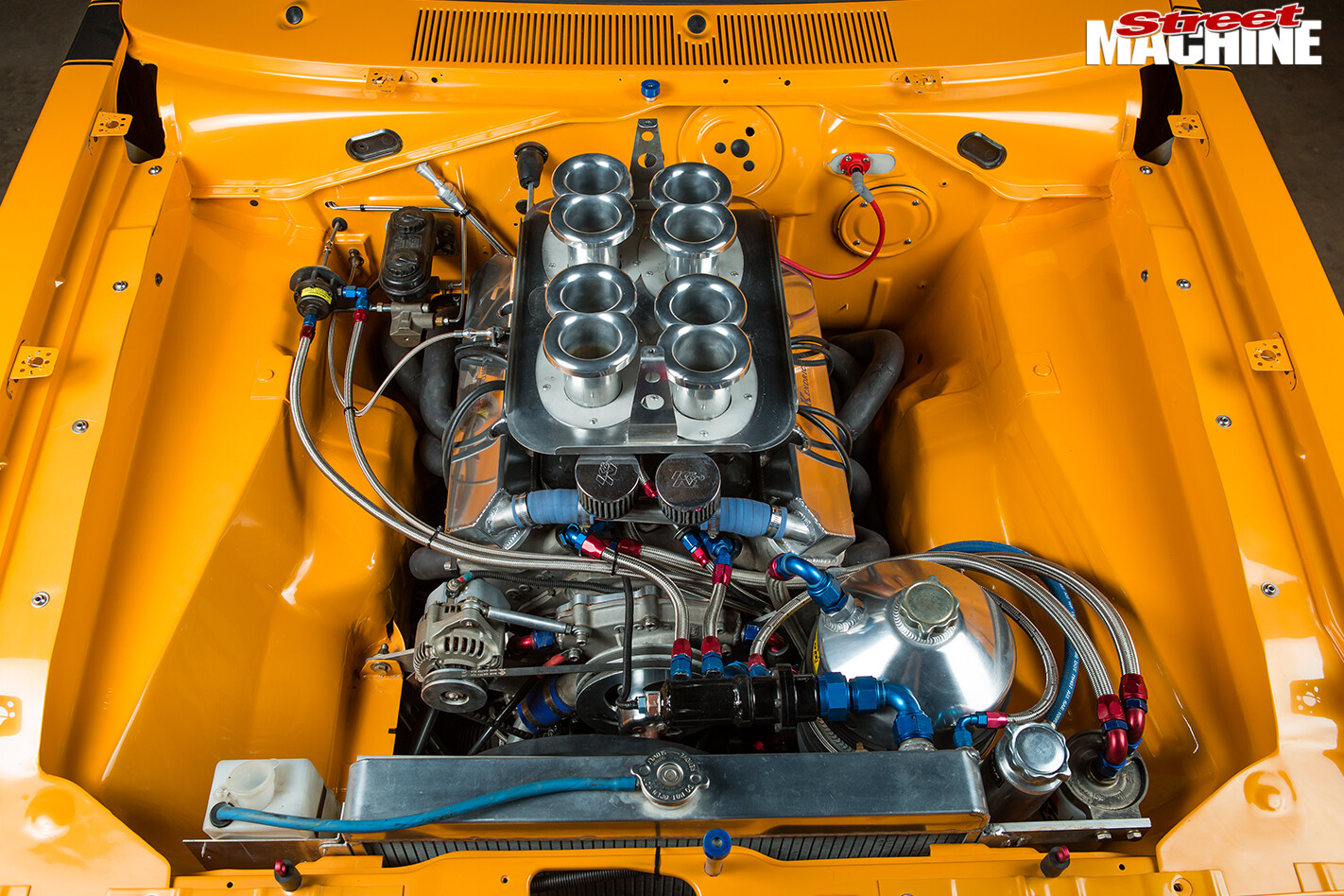 Geoff drew on his knowledge and experience to piece together an 875hp 410-cuber based around a Mopar Performance A8 engine block. This aluminium ‘sprint car’ casting was filled with a 3.80-inch Bryant billet crank and Carrillo rods, while CP pistons round out the short assembly. 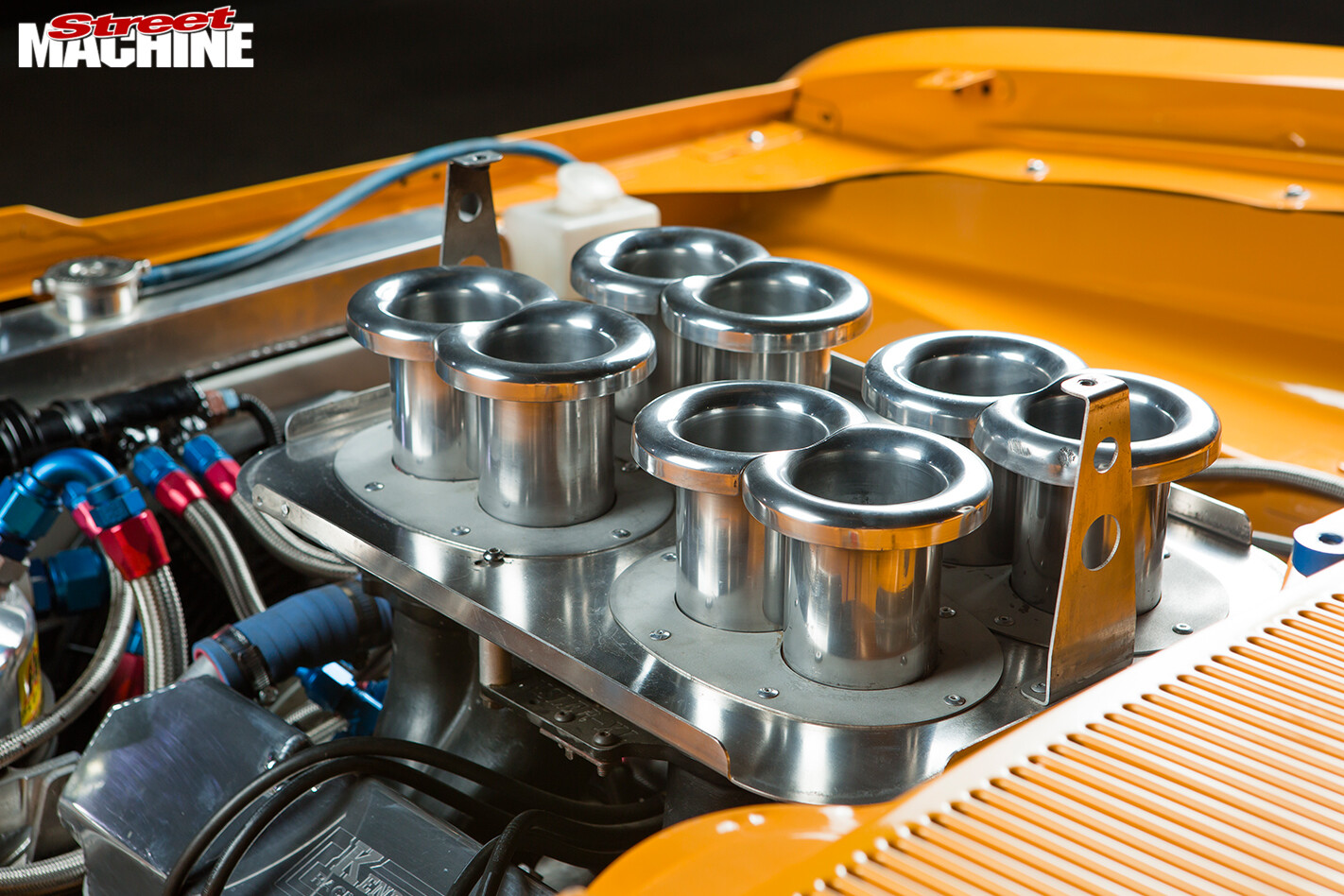 That hornbag induction is a Kinsler intake topped with constant-flow Kinsler mechanical injection, fed copious amounts of methanol from a custom 40-litre fuel tank and bay-mounted surge tank, via a 450 Patterson pump. “The fuel economy at cruise is one litre for every kilometre, so at least it’s easy to work out how much you need,” Peter laughs. “At full noise it’s 10 times that much; it loves a drink.” Two-inch primary pipes meld into 3.5-inch collectors and a matching twin system, while a Brown’s aluminium radiator, along with the best things to come from an AU Falcon – their twin thermo fans – add driveability for events like Powercruise. An MSD Digital 7 ignition sorts the spark. 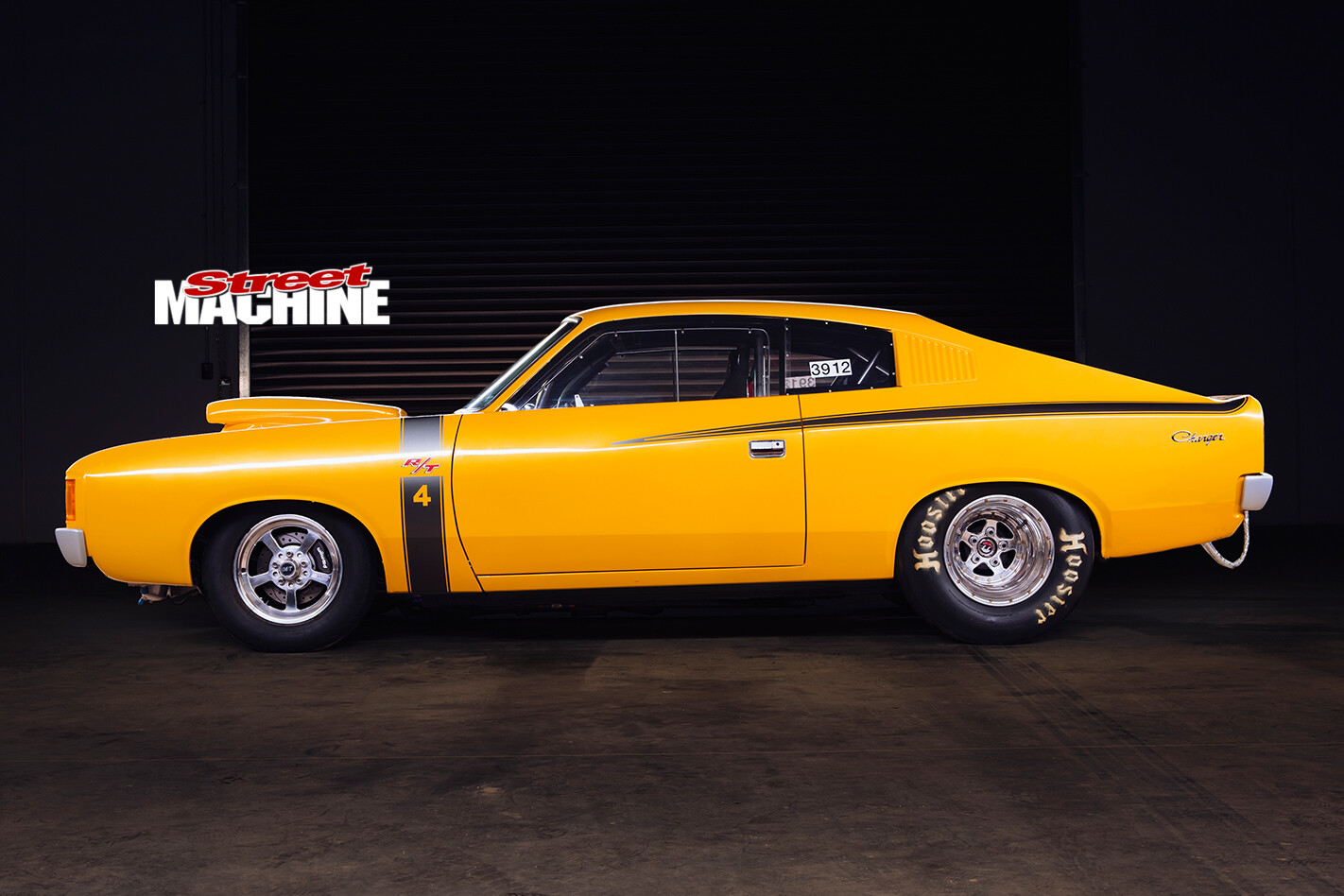 All E55s were fitted with a 727 Torqueflite from the factory, but even a beefy trans like the 727 needs work to handle 875hp, so Peter had Peter Veersma piece together a full-manual version fronted with a 5500 converter. A 3.5-inch chrome-moly tailshaft spins rearwards to a sheet-metal nine-inch fitted with an aluminium bolt-through centre, lightweight spool, 4.56 gears and stout 40-spline Moser Extreme axles. “I purposely over-engineered the car so I could step up the engine spec without having to reconfigure the body or remaining drivetrain,” Peter says. 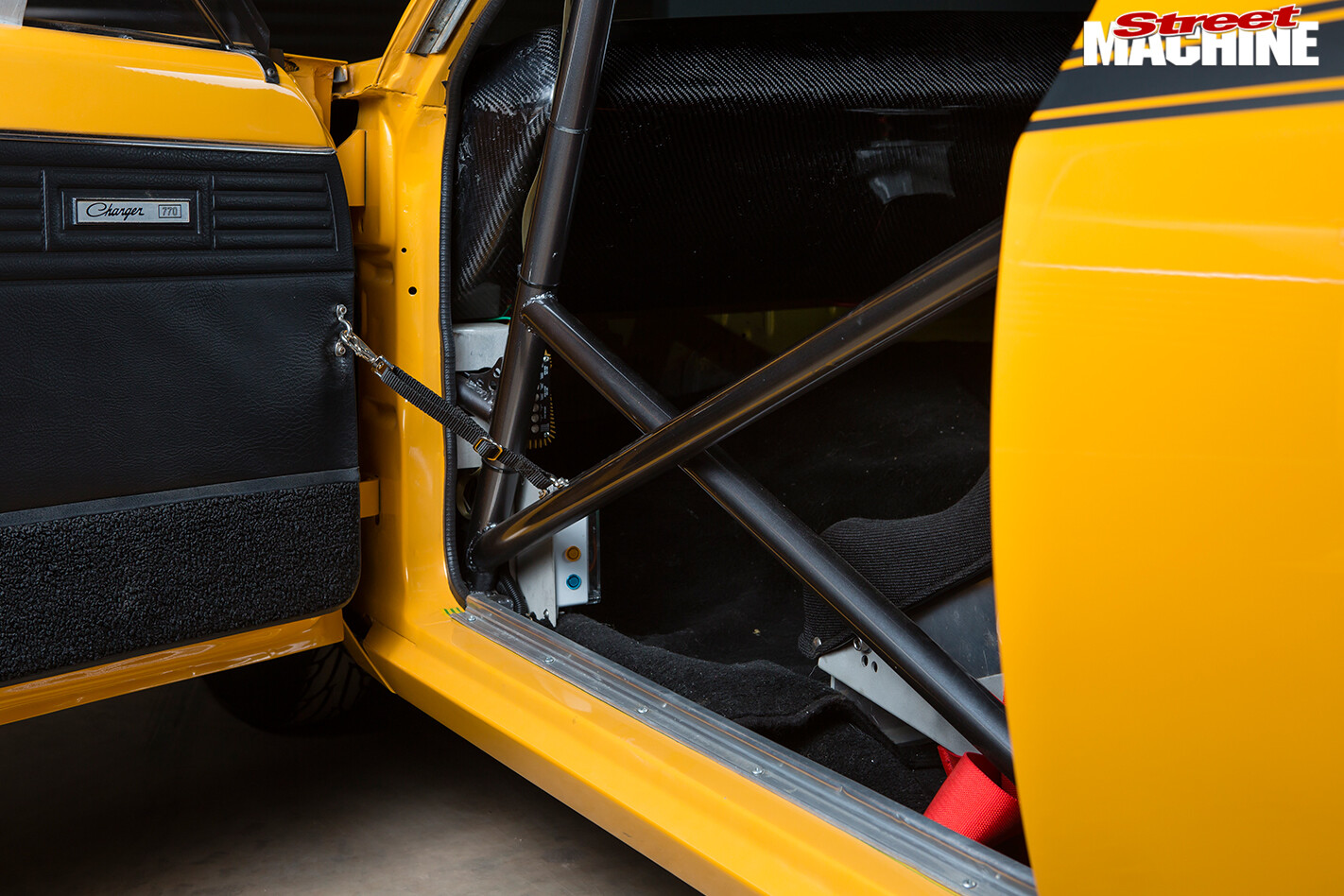 That concept was further explored in the second part of the build, which focused on the suspension and removing additional weight. Peter looked to the US to see what the Yanks were doing with similar-horsepower combos and replaced the torsion front end with a complete Magnum Force double wishbone assembly with QA1 double adjustable coil-over shocks. Calvert mono-leaf rear springs replace the factory items and keep things on the level with Afco shocks, CalTracs and an anti-roll bar. “It’s like chalk and cheese,” is how Peter describes the new set-up. “The front end change especially has made a monstrous difference to how the Charger drives and handles. I fitted a Flaming River steering rack as part of that conversion, with power assistance driven off the rear of the external oil pump. It used to be hard work to steer and would barge around corners with any pace on board, but now it’s effortless.” 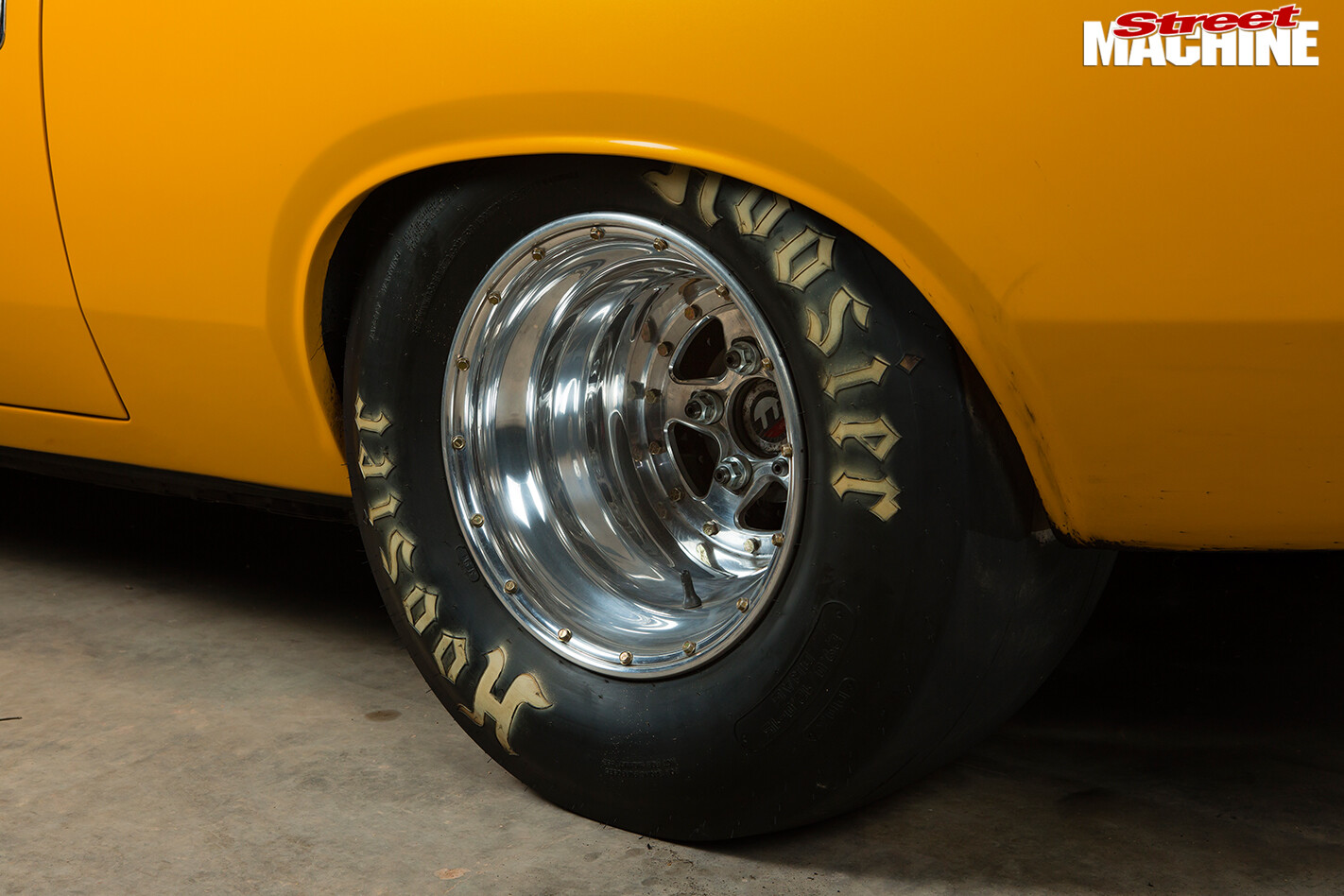 The body was already in good nick when Peter first purchased it, and the biggest change has been a diet for the bolt-ons. John at WA Race Car Fibreglass reproduced the bonnet, boot lid, front guards, bumpers and even the dash frame in carbonfibre. 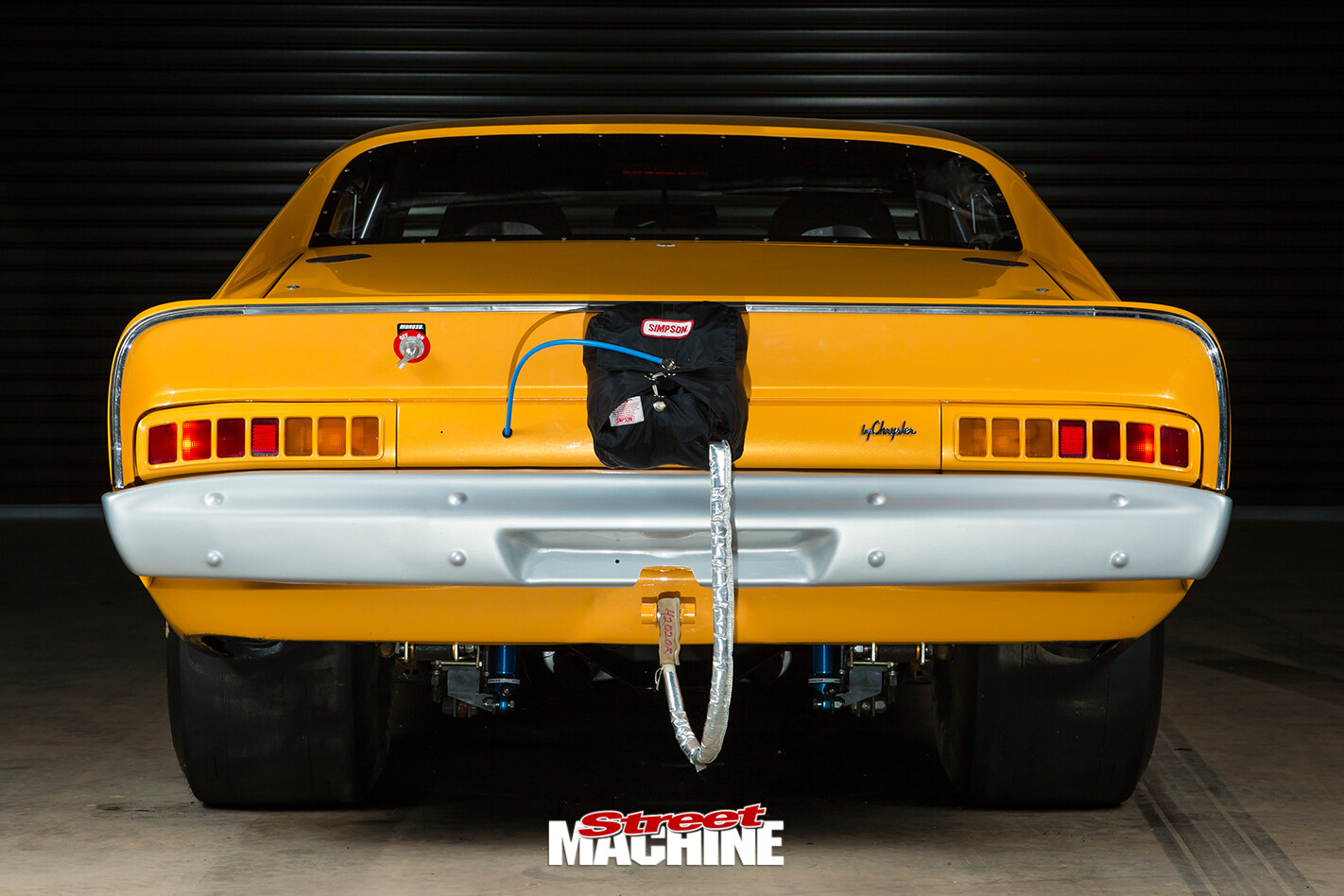 “Saving weight was like a challenge,” Peter says. “Soon I was looking at every part and bracket, analysing whether it could be removed altogether or replaced with a lighter material. With me on board the car tips the scales at 1300kg, so it has paid off. Being a genuine E55, I have kept every conceivable part should it ever need to be returned to stock, including the 340 engine.” 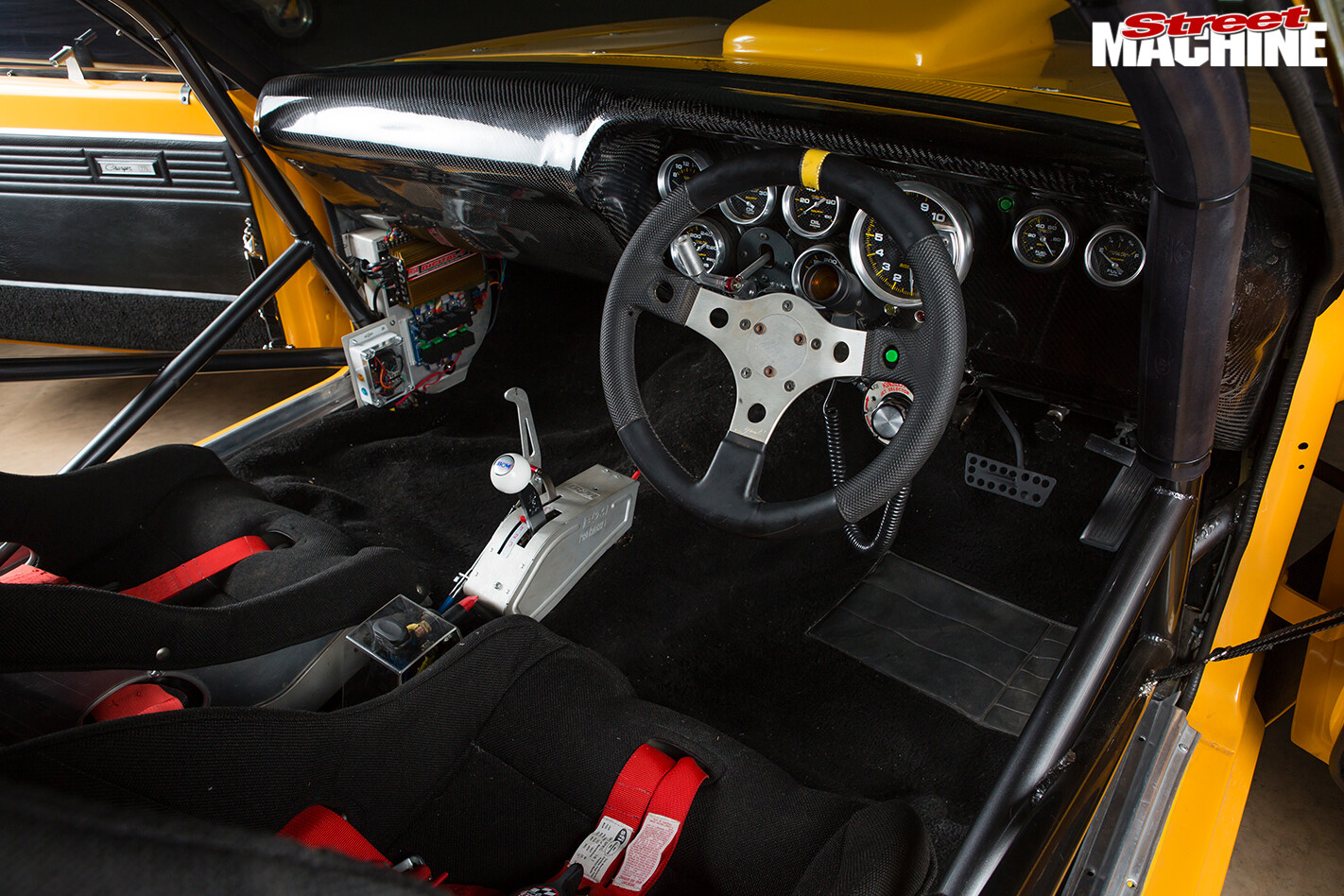 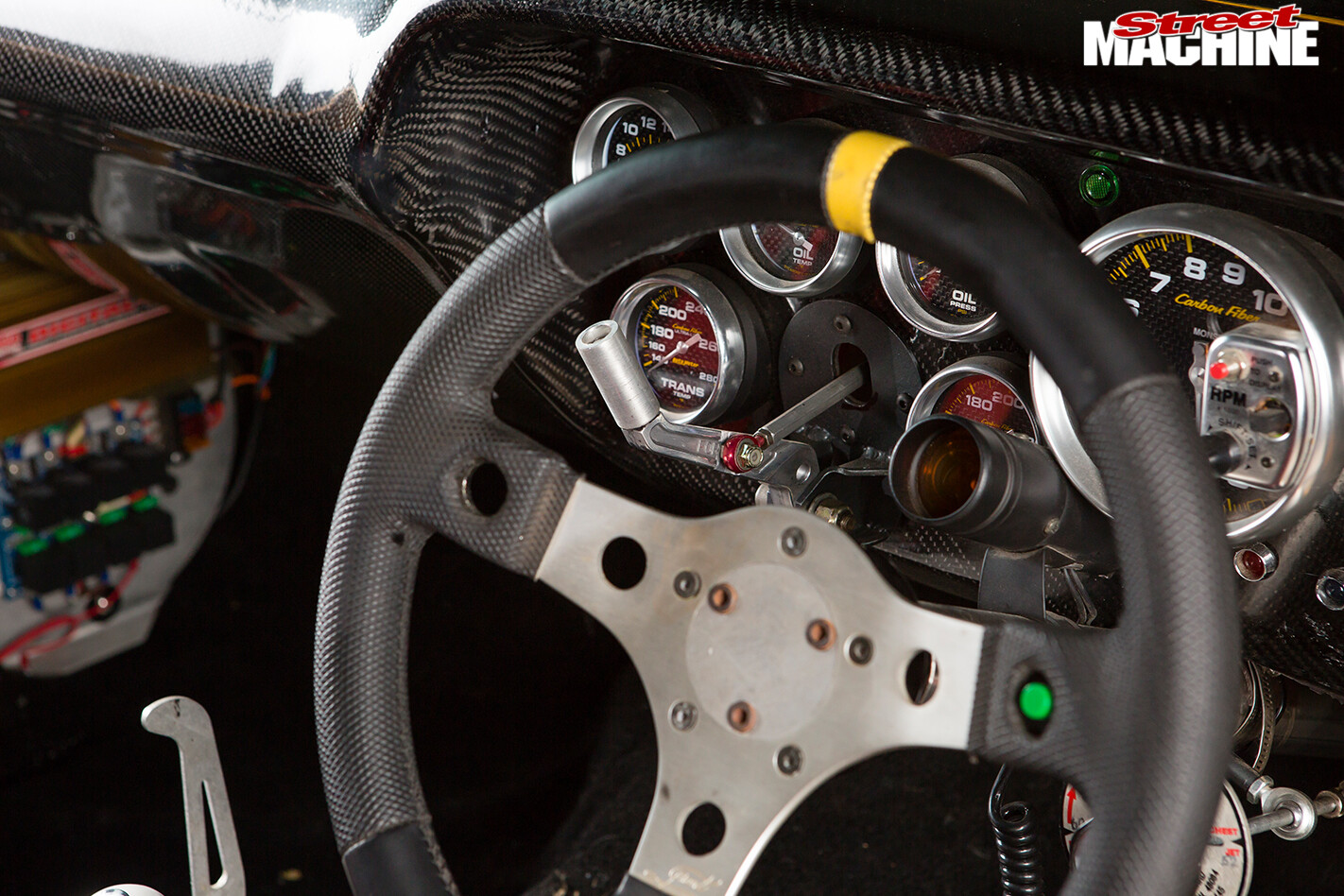 A black interior remains as a nod to the Charger’s muscle car roots but features Kirkey race seats and an eight-point chrome-moly ’cage, designed and built by Peter with the help of Ian Jenkins. The carbonfibre dash houses a complement of Auto Meter gauges, and gear selection is handled by a B&M Pro Ratchet shifter. 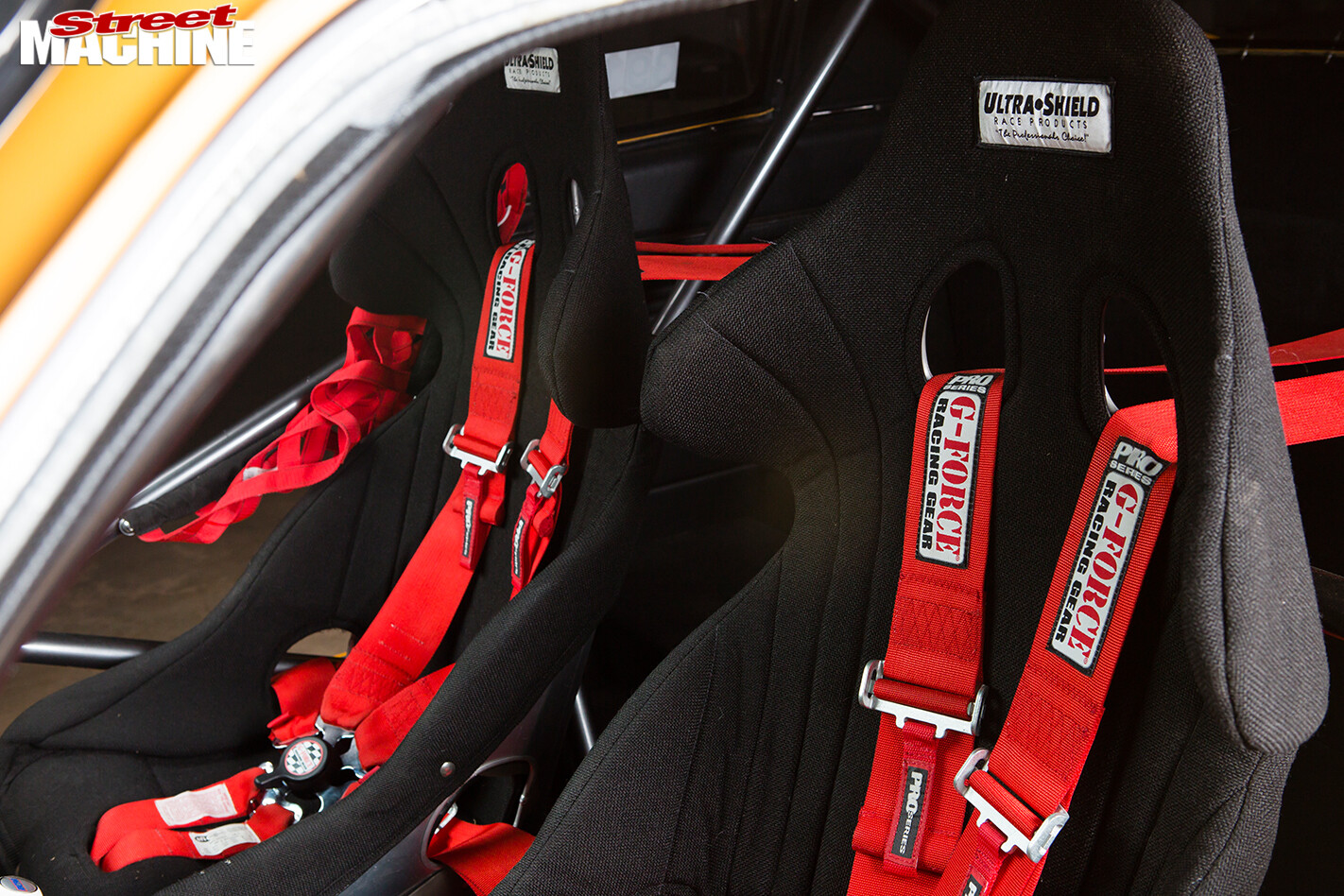 Since the car’s completion Peter has completed his licensing passes and run a 9.28@144mph. “That was with a very poor 60ft and 1000ft shutdown,” he says. “There’s been a few teething issues along the way, but I’m learning more about tuning the injection and hope to dip into the 8.80s with this running gear. From there, Geoff and I plan to fit an 1100-horse, 510-cube small-block with a CS3 Lenco, so the extra work spent engineering the car will hopefully make that a smooth transition.”