IT has been five years since drag racing legend Craig Brewer passed on. Below is the tribute published in the September 2105 issue of Street Machine:

IT WAS with a heavy heart that Melbourne’s drag racing community laid pro street legend Craig Brewer to rest this month. The big fella had garnered so much respect throughout the Victorian racing scene that over 100 of Melbourne’s toughest streeters turned out to send him off. The cruise, starting from the BP service station at Officer in Melbourne’s south-east, headed 55km to the memorial service at Lardner Park, and stretched for several kilometres. Some of the toughest machinery travelled on trailers, but many more made the trip under their own power, and at the other end the car park looked more like a show ’n’ shine than a funeral. It was a fitting send-off for a bloke who lived and loved pro street racing. He is survived by his wife Rhonda and three children, Matilda, Heidi and Scott. 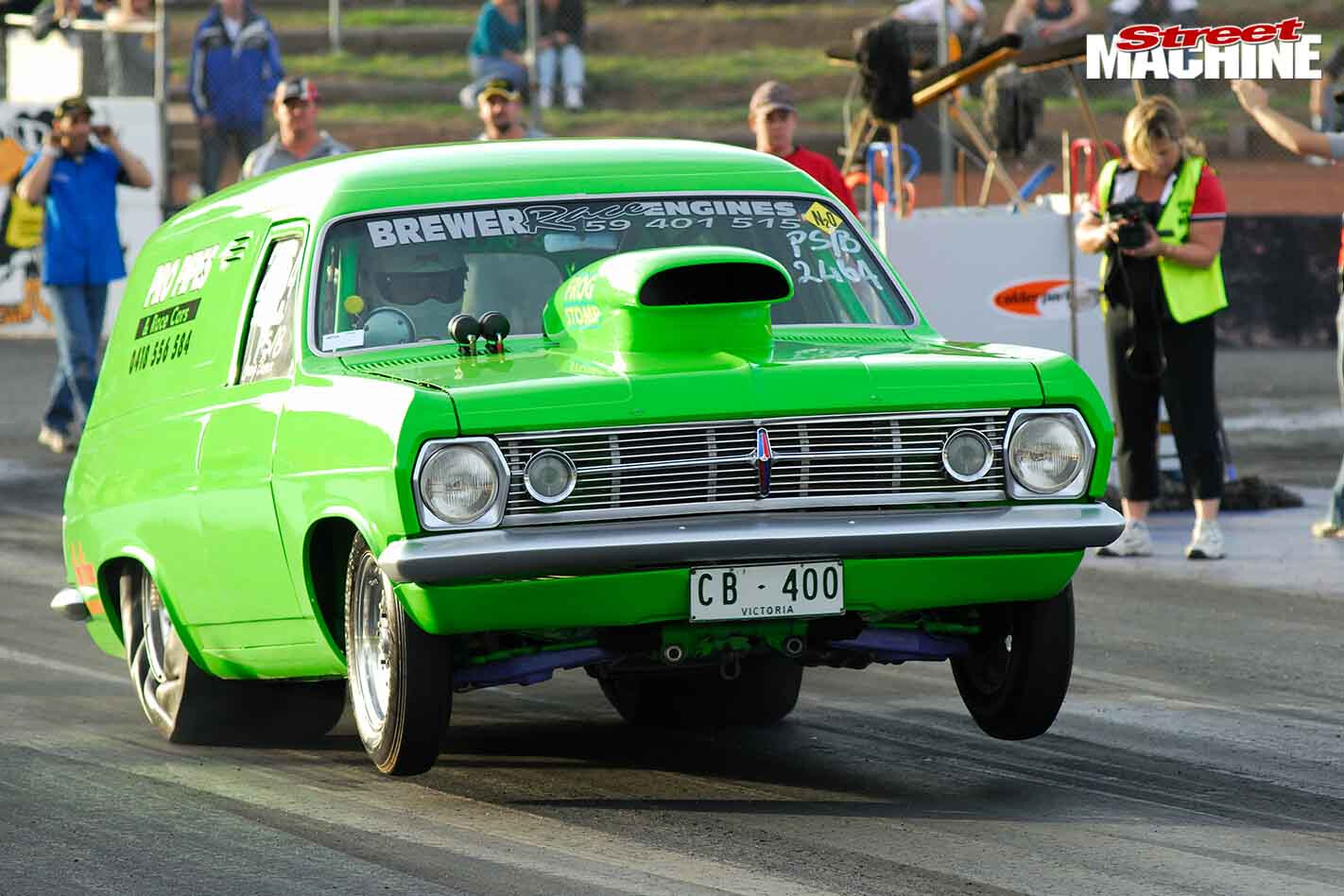 I remember meeting Craig a couple of times over the years, usually while he was crewing for other guys, but the last time we spoke was at Calder Park, where we talked about the upcoming Street Machine Drag Challenge. He had his orange 355ci Holden-powered HT Monaro out there making some laps – it ran 10.78@128mph that night – and he was pretty proud of the fact that he’d driven it over 110km to get to Calder and had absolutely no qualms about driving it home again.

“I remember that,” his wife Rhonda recalls. “He was chuffed to drive it there, run 10s and drive it home, especially when there were all these guys putting their cars on trailers. ‘You’ve got to use them,’ he said to me.”

Craig’s affinity with building cars started off like it did for so many of us – by pulling stuff apart as a kid. From pushbikes through to motorbikes and then cars – if it had wheels or a motor then Craig was looking at ways of making it go faster. As a teenager it became clear that the education system wasn’t doing much for Craig, and at 14 years of age he got a special dispensation to leave school to start an apprenticeship building trucks with his grandfather. “It wasn’t that he was a ratbag kid or anything,” Rhonda says, “it was just a mutual agreement between the school and the family that he’d be better off learning a trade.”

It was there that Craig, or Shonky as he was known to his mates, learned the skills that would serve him well when he started his own business, Pro Pipes & Race Cars.

“The name Shonky was a name that came before me,” Rhonda says. “It was a term of endearment, because he was anything but shonky when it came to his work. He started the business officially in 1999, but even before that he was staying back at all hours working on people’s cars at the truck factory.”

Craig’s first car was a UC Torana with a five-litre V8; he was defected off the road a week later. That would be the first in a string of tough streeters, each quicker than the last. His blue VH Group C Commodore, nicknamed ‘Brocky’s Nightmare’, was the scourge of the Dandenong street drags, eventually beating Melbourne street racing identity Dwayne Gerdes and his infamous FC Holden. It was also Craig’s first experience with nitrous oxide.

“Craig was out with one of our other mates, Darren, that night,” Eric Maudier recalls. “Dwayne’s FC was pretty much the fastest thing in Melbourne back then. They spotted him and lined him up. Craig was pretty nervous about using the gas; he’d always had it hooked up, but never used it. But he ended up using it and beat Gerdes three times that night.

“After that the VH started getting a reputation, and cops started to notice him too. One sergeant in particular really had it in for him and hassled him every time he took it out.

“From memory the Commodore ended up running low 11s, which was pretty quick for back then; it even ended up on the cover of Performance Street Car magazine.”

At 6ft 4in, Craig was a big bloke, and an imposing figure for those that didn’t know him. Outlaw Radial racer Steve Bezzina remembers knowing about Craig well before he actually met him. “He was this big guy who seemed to be around all the fast cars. His nickname was Shonky, and that, combined with the size of him – well, let’s say I was in no hurry to meet him,” he says. “That’s one of my biggest regrets really, because eventually we became really good mates and I wish I’d made the effort to meet him sooner.

“He was a big man with a big smile and always happy to help someone out, and when it came to fast cars he always had my best interests at heart. It was important to him that we could always go home to our families at the end of the day, and I feel privileged to be able to call him my mate.” 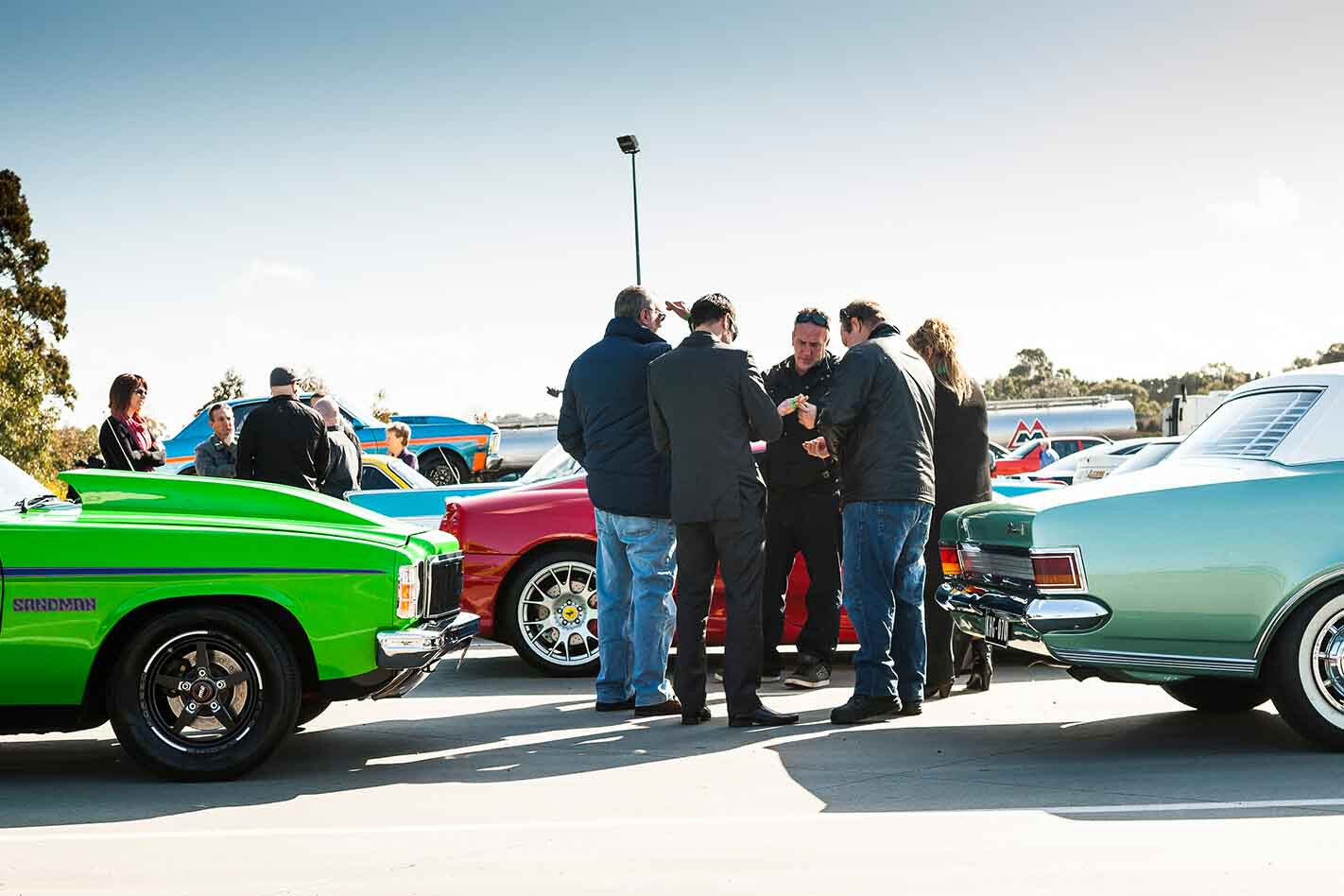 Being a large bloke, most of Craig’s mates remember stories of him lifting or carrying various ridiculously heavy items. His mate Rob Camilleri recalls Craig wandering up his driveway carrying a Ford nine-inch diff centre in one hand like it was a child’s toy. Another time they were mucking around with the ski boat and jet skis – another of Craig’s hobbies – and Rob got the tow rope on his jet ski wrapped around the propeller.

“Here I am trying to get this thing unstuck and Craig walks up and lifts the whole back end of the jet ski out of the water with one hand and unwraps the rope with the other, like it was nothing at all,” Rob laughs.

Craig was best known for his HR panel van, which he bought as a plain white project car back before he met Rhonda, and over time he turned it into a bright green pro street missile.

“Green became a bit of a thing with Craig,” Rhonda says. “Someone suggested the colour and he just ran with it. Both the van and the C10 were painted bright green, and every now and again he’d see something green and have to buy it, whether it was an umbrella or a lanyard or whatever.”

He ran the iconic HR van for quite a few years with a 468ci big-block and nitrous combo, before stepping it up to 632 cubes for a serious crack at the APSA Pro Street bracket in 2012. “Craig said: ‘What do reckon? Should we have a crack at the championship?’” good mate Nej Dalipi recalls. “‘I want to do it before I die,’ he said. That was before he was diagnosed with cancer.”

Craig went on to take out the APSA Pro Street Blown championship that year, with the van running 7.86@174mph at Sydney Dragway.

“I actually flew up to watch him race in the finals,” Craig’s dad Bill says. “We just stayed in the crowd and he had no idea we were there until he’d won the championship. He was over the moon that we were there.”

It was shortly after that Craig got his diagnosis and with that he lost his ANDRA licence, but it didn’t stop him from being involved in racing. “We threw that Mustang together after Craig had his operation,” Nej says. “The car had been crashed before Craig bought it and was pretty bent in the front end; no one wanted a bar of it. But Craig said: ‘It’s no big deal, I can fix it.’”

Nej took on the driving duties, and the 632ci Mustang has already gone 8.30@162mph naturally aspirated, and currently sits at fifth place on the Pro Street Unblown Top 10, and second in the national championship.

“Craig was such a likeable bloke,” Nej says. “His willingness to lend a hand, both physically and with advice, set him apart from just about any other person at the track. He was a great comrade.”

Harry Haig recalls a message he got from Craig when he first started racing. “I knew as much about setting up a car as I did about flying to the moon,” he remembers. “After my first outing with POP666 I get this message: ‘If you want that pink turd to launch, ring me.’ After that it was weekly calls about how the car was going. Craig would be like: ‘Try this and get back to me,’ and eventually we cut more than three-tenths off the 60-foot time. I can’t express how much I appreciated his help. He was an A-grade shit-stirrer, but he was a true Aussie gentleman.”

We could include dozens of tributes like that from racers; it would read like a who’s who of the Australian pro street scene. But Nej said it best on the cruise, looking around at the array of mental machinery: “Craig would have loved this, and I’m pretty fucking proud to be a part of it.”