WHAT you are looking at is as close to a brand-new ’57 Chev Bel Air as you can get without a time machine. But this Bel Air is built with a whole bunch more loving care than when it first rolled out of Detroit.

You see, Chris Retzos’s Chev was almost entirely hand fabricated by a couple of talented blokes in Deniliquin, NSW. The whole body has been completely re-skinned at Shane Rowe’s Southern Rod and Custom – in fact, the only part of the body that isn’t new is the roof turret and the wiper panel. The boys didn’t just replace what was there, they subtly modified countless areas of the car – visible or not – to make one of the smoothest tri-five Chevs on the planet. 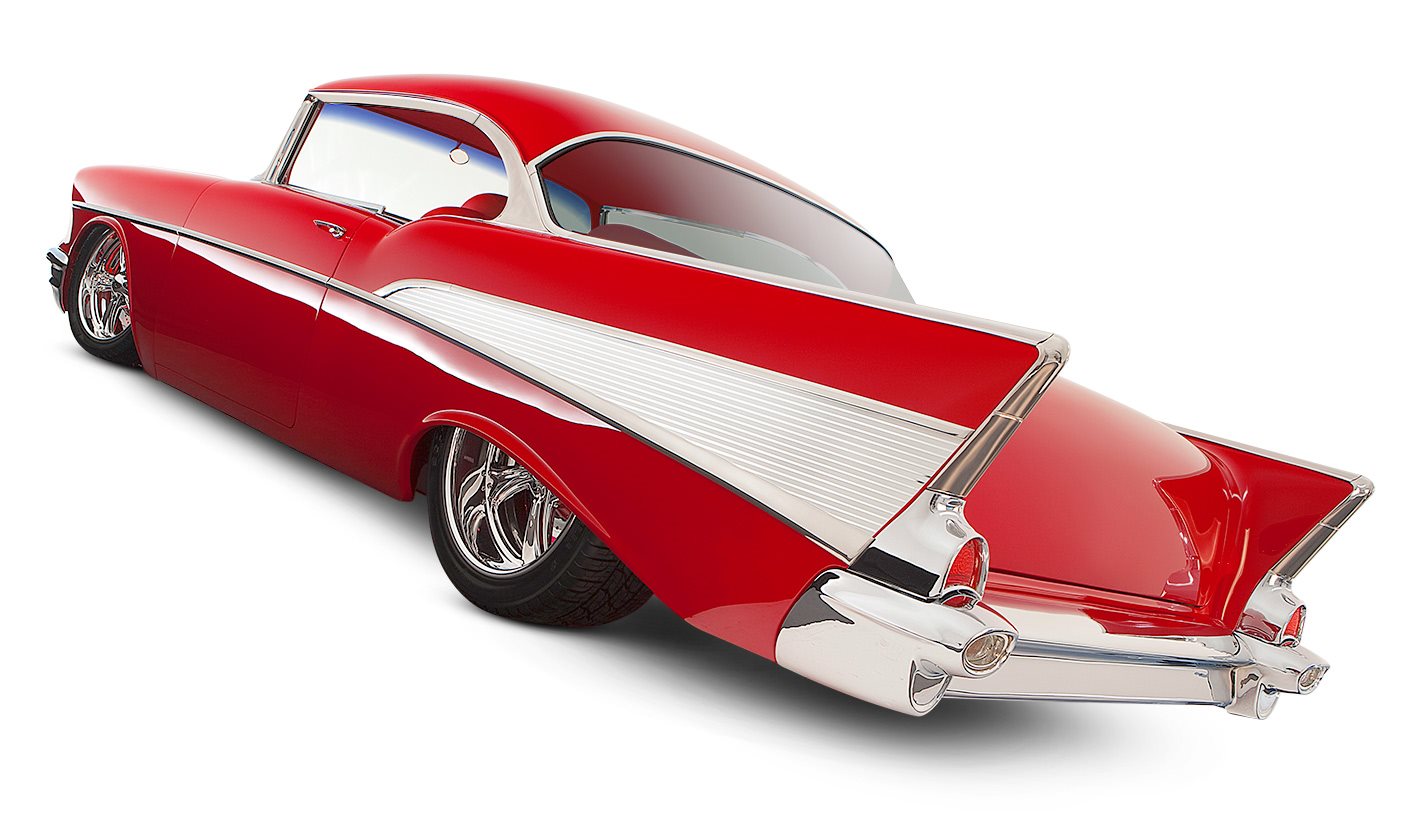 Body mods are extensive but subtle, with the new rear quarters shaped to eliminate what Shane calls the “Chev bum effect” where the quarters meet the door. The boot skin now shuts above the bumper, a la ’57 Cadillac. Both bumpers were cut ’n’ shut, smoothed and tucked in, with the surrounding sheetmetal modified to suit

While the ’57 is a classic body shape, it was made for mass consumption and Shane reckoned there was plenty that could be done to improve it, which is probably how God felt when he was creating Jennifer Hawkins.

The same level of care went into the chassis, which was also made from scratch. Off-the-shelf parts are rare and include C4 Corvette A-arms, an all-alloy Keith Black big block, TCI TH400, Currie 9in diff housing and monster Wilwood brakes.

The most noticeable body mods are the ultra-swoopy front guards, with reshaped wheel arches, and the headlight doors smoothed and fitted flush to the guards. More subtle mods include the quarters and doors, which have been meticulously fabricated and reshaped for a smoother side profile. The boot has new outer and inner skins and the lid’s been shortened so that it closes above the bumper, instead of below. 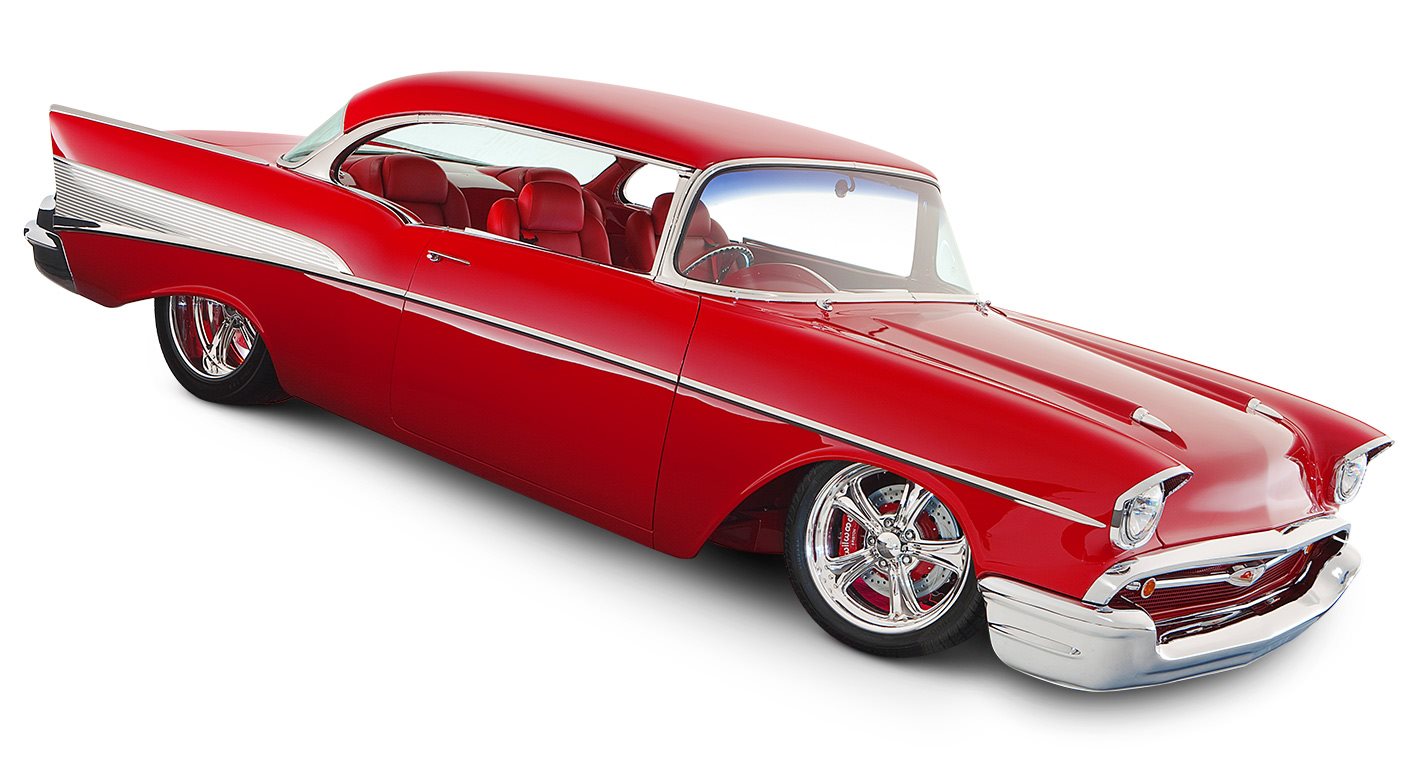 The upper grill mould – originally a three-piece pressed metal unit that bolted to the bonnet – was remade as a one-piece item. The bonnet now closes behind the mould for a much neater than factory finish. The bonnet itself has no seams inside or out and appears to have been carved out of a single piece of metal. Even the Chev’s trademark bonnet bullets were remade in billet, with a sleeker profile fitting the car’s theme.

Paint’s a special-mix PPG red base Shane calls SRC Red under clearcote. All painted areas, including the chassis, interior and panels, were sliced and buffed for uniform gloss levels throughout the car.

The better-than-new Chev came together over five years and, as you’ve probably already gathered, it’s an exercise in relentless good taste.

Businessman owner, Chris, bought the US-import car in Queensland and shipped it off to another workshop for a rebuild. But he soon pulled the plug on that build and redirected the car to Shane and the boys. 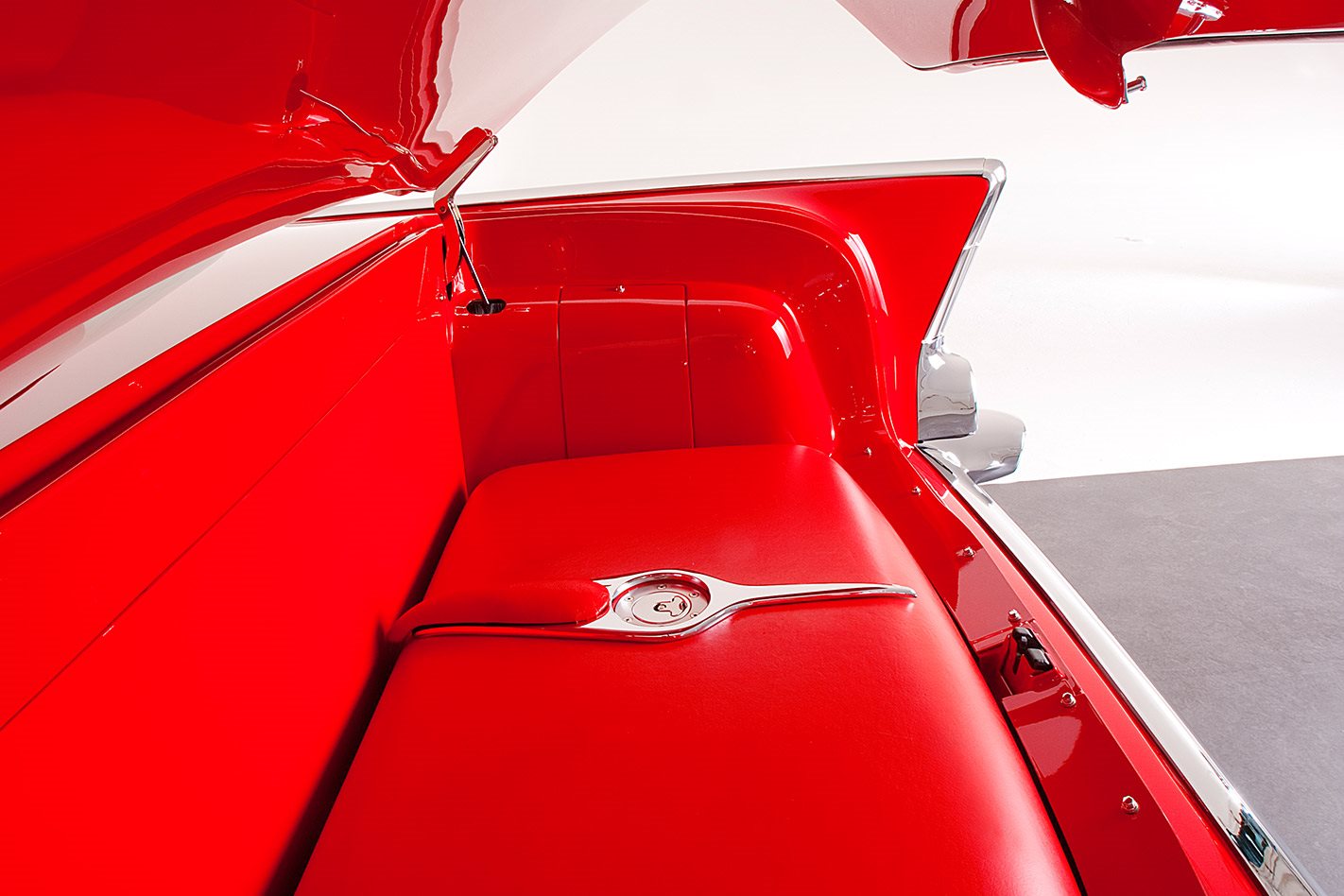 Removeable panels in the boot allow access to the Air Ride system and electronics. The alloy fuel tank sits on the floor and is trimmed in leather. Polished hinges are handmade at SR&C

“It was a good, solid, all-there car to start with,” Shane says. “We were first told by Chris that he didn’t want to spend too much on it. Originally it was to be a driver. But once we’d worked out what it was going to be, it became a full-on show car. Then, it was basically go for it.”

Mind you, Shane hopes owner Chris will drive the car regularly once it’s finished cleaning up on the show scene. And when that day comes, he’ll be in for one hell of a ride.

Nestled in that lusciously hand-fabricated engine bay and between those stunningly hand-crafted chassis rails (let’s not mince words) is a thumping alloy 540ci rat motor built by Shepparton’s Chris Doonan Racing. Induction’s via a fully polished then painted Demon Six Shooter set-up, and the stainless headers and exhaust are handmade and polished. 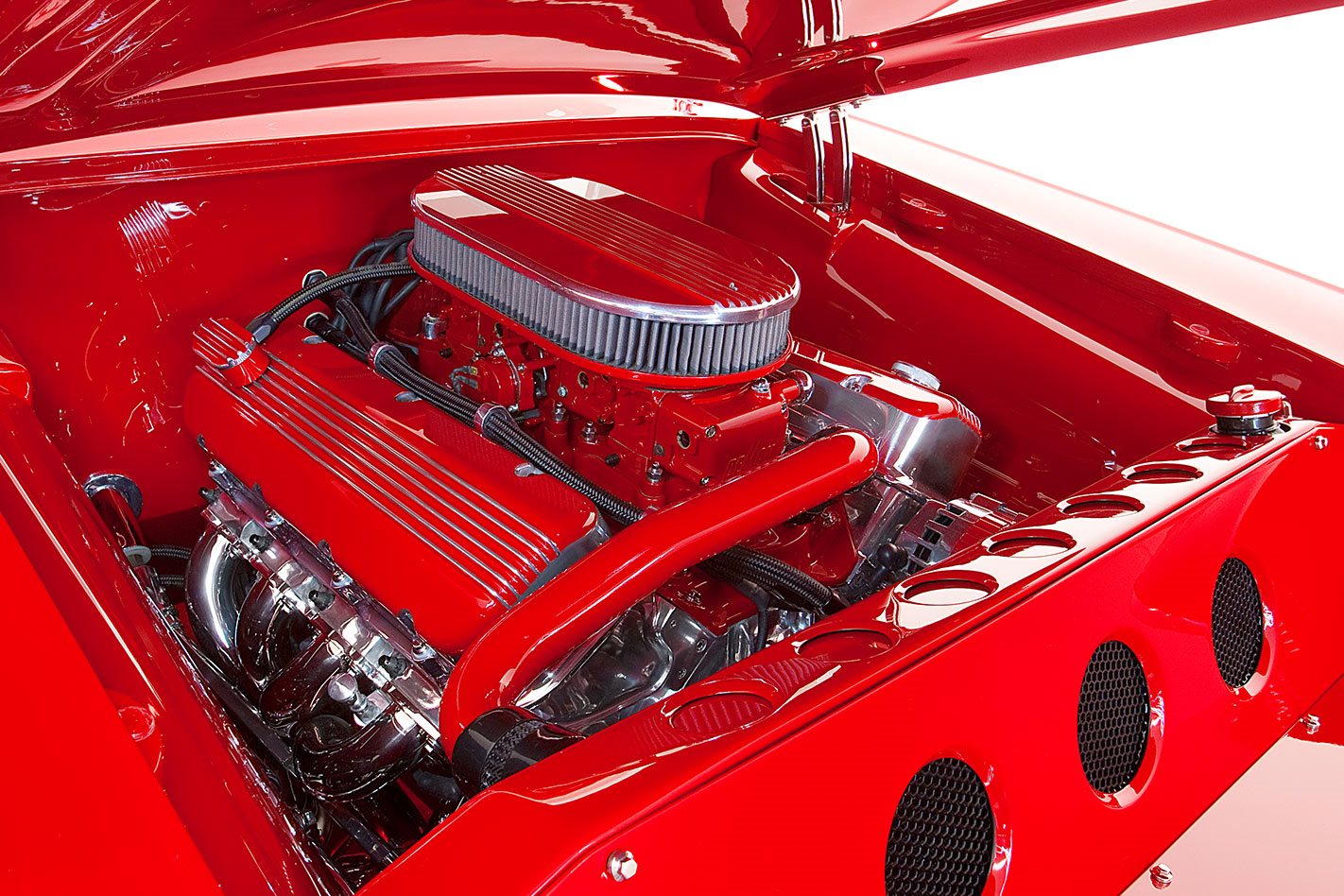 And, yes, with 600hp-plus on tap, there’s grunt enough to get this all-class rock ’n’ roller well and truly up and boppin’.

That ample grunt is channelled to where it ought to go via the TH400 to a 9in inside a glistening housing running 3.9:1 Detroit centre and force-feeding 35-spline Moser axles.

The Corvette A-arms get their own custom crossmember, and the rear’s a custom four-bar set-up. And, as you’ll see from the build shots (see below), there are Air Ride ’bags at both ends.

“We used those for two reasons,” Shane Rowe says. “If and when Chris wants to drive it, it’ll give a nice, comfortable ride. The other reason is purely because we knew it was going to be a show car and would be in and out of trailers. We wanted it super-low for the shows, then to be able to lift it back up to put it back in the trailer.” 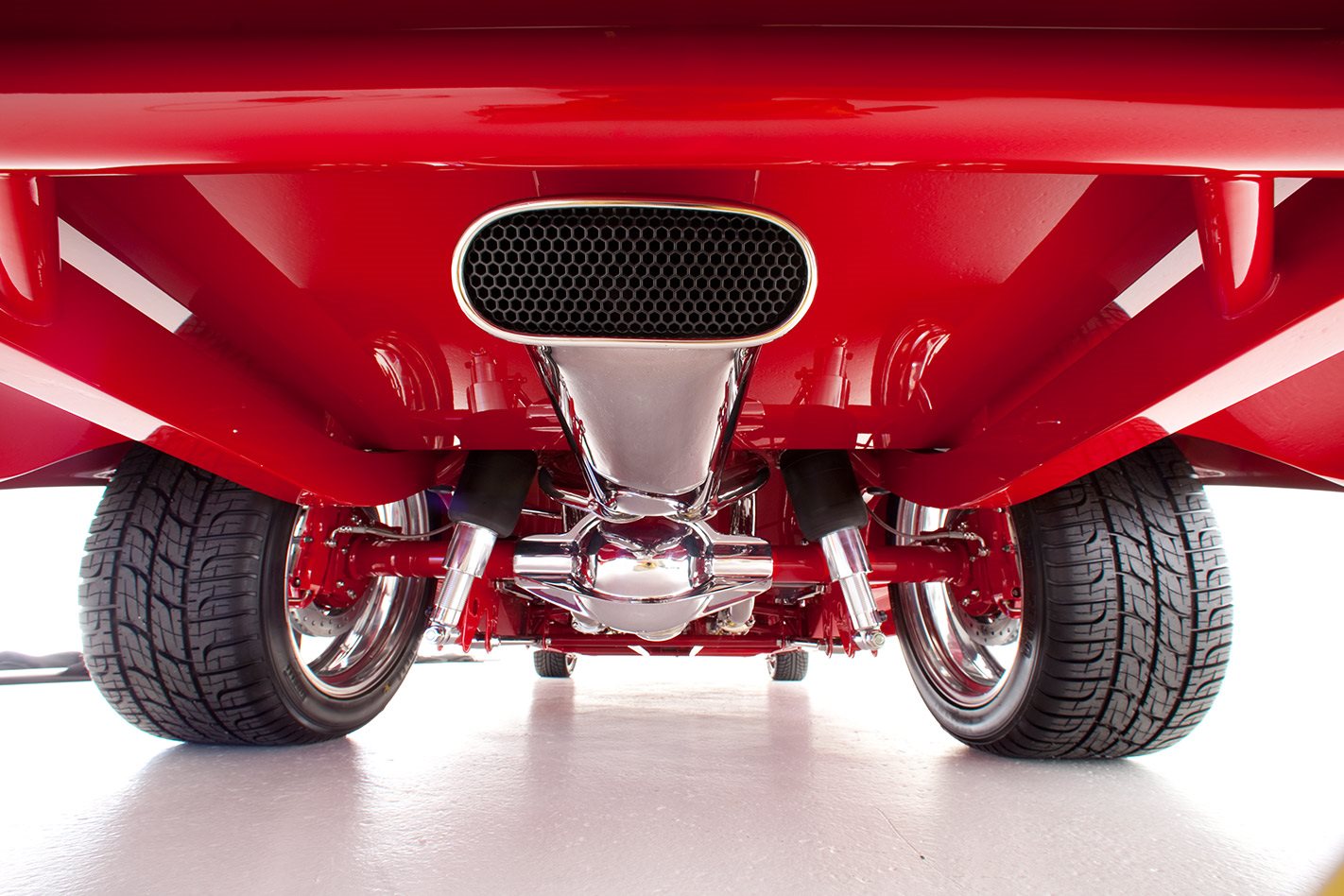 The highly polished Curry diff housing and custom-made stainless steel exhaust system are a joy to behold. All bolts are stainless steel double-fit items with CNC-machined flanged nuts – all filled, smoothed and buffed. Brakes are six-pot Wilwood calipers and rotors all ’round

And if you just can’t get enough of that rich red, you’ll be right at home inside the car. What started life as CV8 Monaro seats have been remade and red suede-trimmed, just like the one-piece custom door trims and headlining. The latter is made to look traditionally-sewn but is actually made up of separate pieces with hidden stitching. And, hey, the whole floor is red leather, too.

As with just about every aspect of Chris Retzos’s immaculate ’57, the dash is handmade to retain the flavour of the original, but actually massively modernised. The Auto Meters reside in a custom panel, dash knobs are recessed, the master cylinder’s been mounted side-saddle underdash for a clean firewall with access via the fake speaker grill atop the dash. Pedals and steering column – topped by a reworked Billet Specialties wheel – are custom made, too. Also hidden under the dash is a full Vintage Air system. 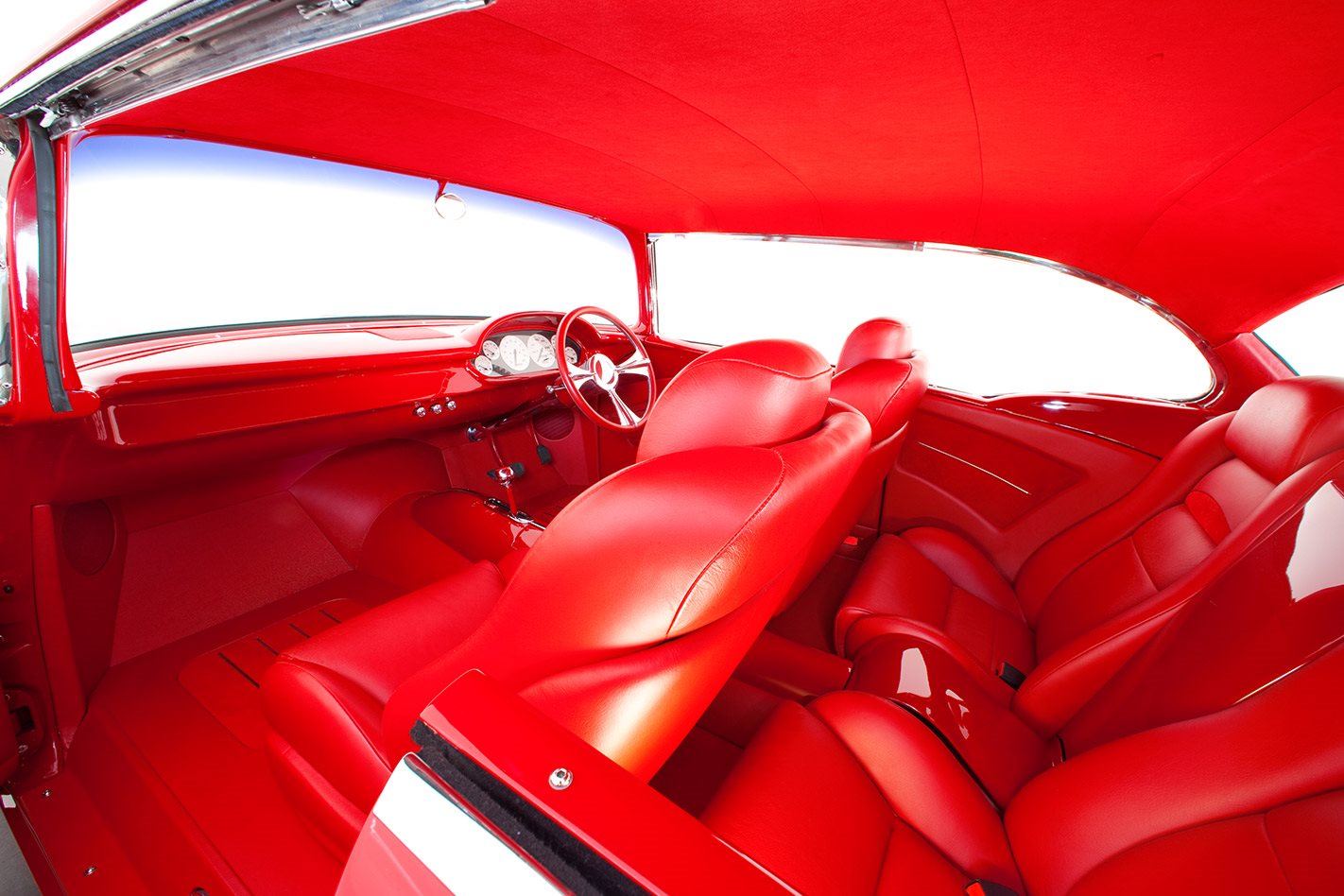 The hoodlining was made in several pieces, but no seams are visible thanks to a hidden attachment system. The Air Ride and power window controls are located behind a door in the full-length centre console. The deck between the rear seats flips down to enable access to the extensive Sony stereo system. Note the one-piece side windows – deleting the quarter vent windows meant not only making new glass, but also new chrome channels and stainless pillar trims

Up front on the custom console there’s a door which gives access to the Air Ride controls, and a special section flips down to reveal the 1000-watt Sony audio system, with two 15-inch subwoofers lurking behind the seats, two 9x5 three-ways in the rear deck, and the amplifiers are in the space above the rear Air Rides.

“A lot of people don’t understand, but it’s only when you’re lucky enough to get underneath the car or put it up on a hoist that you realise the amount of detail that’s gone into this car and how many handmade parts there are on it,” Shane says. “The amount of fabrication and trial fit-up was outstanding. There were so many hundreds, thousands of hours put into it, and a lot of the work’s actually hidden, unfortunately. 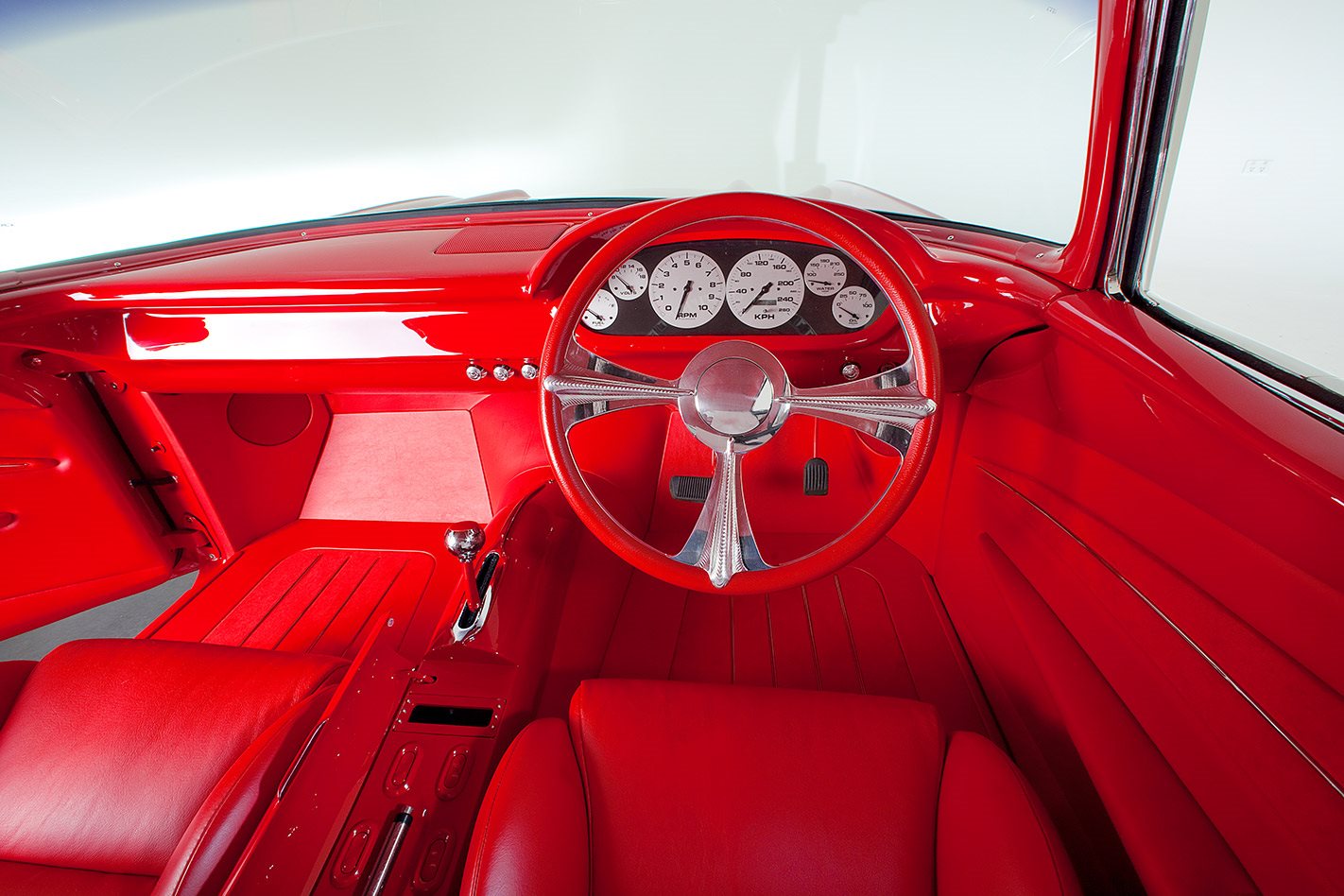 The entire dashboard is new metal, designed to be a smoother, more modernised version of the original. The Auto Meter gauges look like they have been painted on, with SR&C stripping them out and rebuilding them with new faces. Other neat tricks include a faux speaker grill to provide access to the master cylinder, which is mounted transversely under the dash

“People say, ‘You should put a big stereo in it’, but they don’t realise that there is one in there; it’s just hidden.”

Also hidden are things like the air lines for the suspension (okay, they’re inside the chassis rails) and under-bonnet wiring. Like Shane says, in some ways it’s a shame that a lot of what you see isn’t what you actually get.

At its first major public outing – the 2009 Melbourne Hot Rod Show – the born-again ’57 virtually stopped the show. At Sydney’s MotorEx, it again cleaned up, this time walking away with a swag of Meguiar’s Superstars awards, including Top Car, Top Custom and Top Engine Bay, Paint, Undercarriage and Trim. 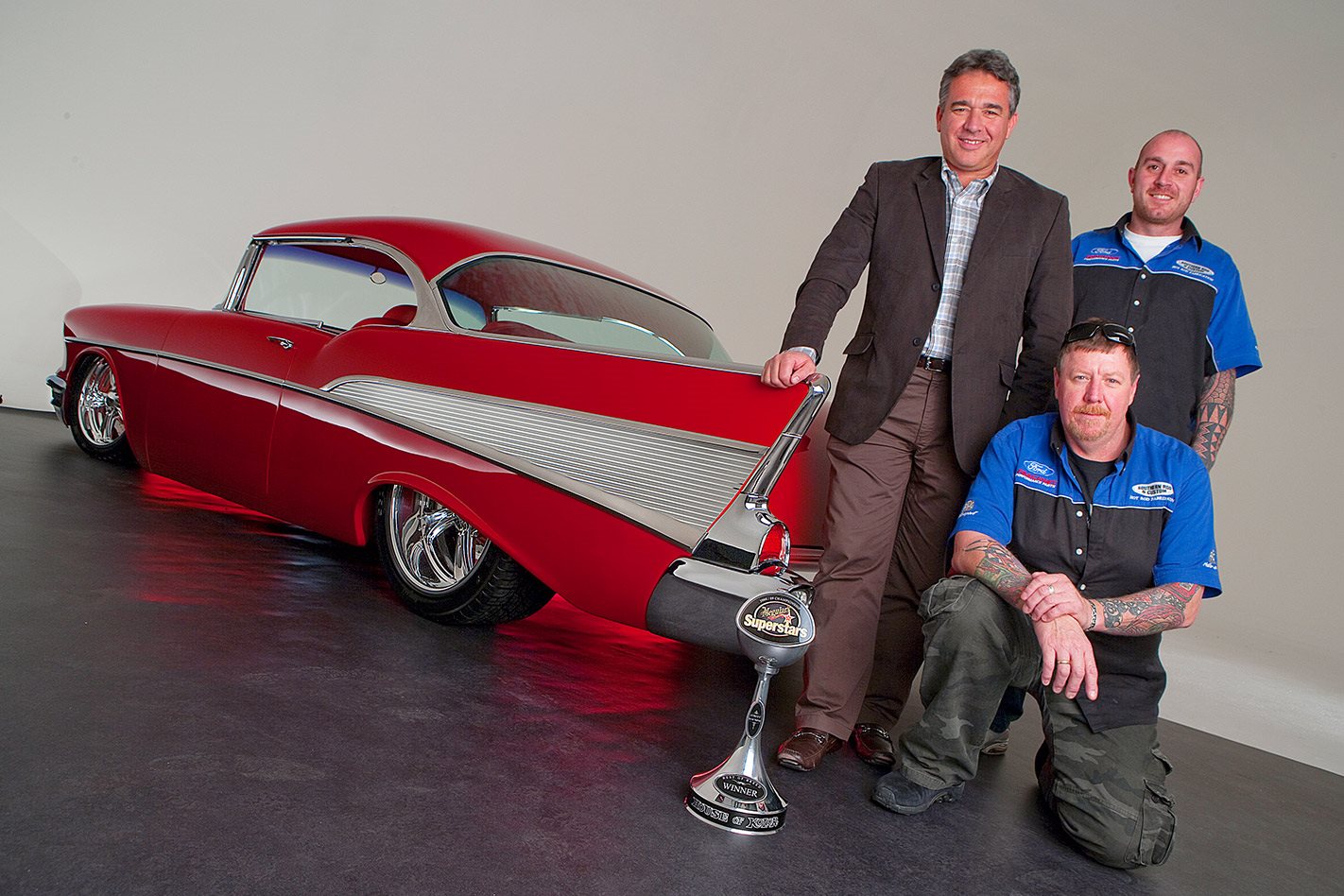 Shane (kneeling) and Chris, with Shane’s number-one helper Stuart Tangey, who took care of most of the prep work, paint, final fit up and detailing

“Thanks, but the car was built to do just that,” he says. “Once you mix a healthy budget with the talented people we’ve got around us, you get a car to that standard of build, anyway.”

Asked if he’d do anything differently if he could wind back the clock five years to witness the same car, with the same job brief, rolling through the doors of his Deniliquin workshop, Shane doesn’t miss a beat.

“There’s always something you’d do differently,” he says. “We think we’ve achieved what we set out to do, which was build a brand-new Bel Air; hence it’s name, NEWAIR.

“The current trend is in flush-fitting glass, and all that sort of stuff. You could go on and on. The way it is, I think we’ve pulled off what Chris wanted, which was basically a new ’57, rather than a full-on custom.”

CHRIS'S BEL AIR - IN THE BUILD 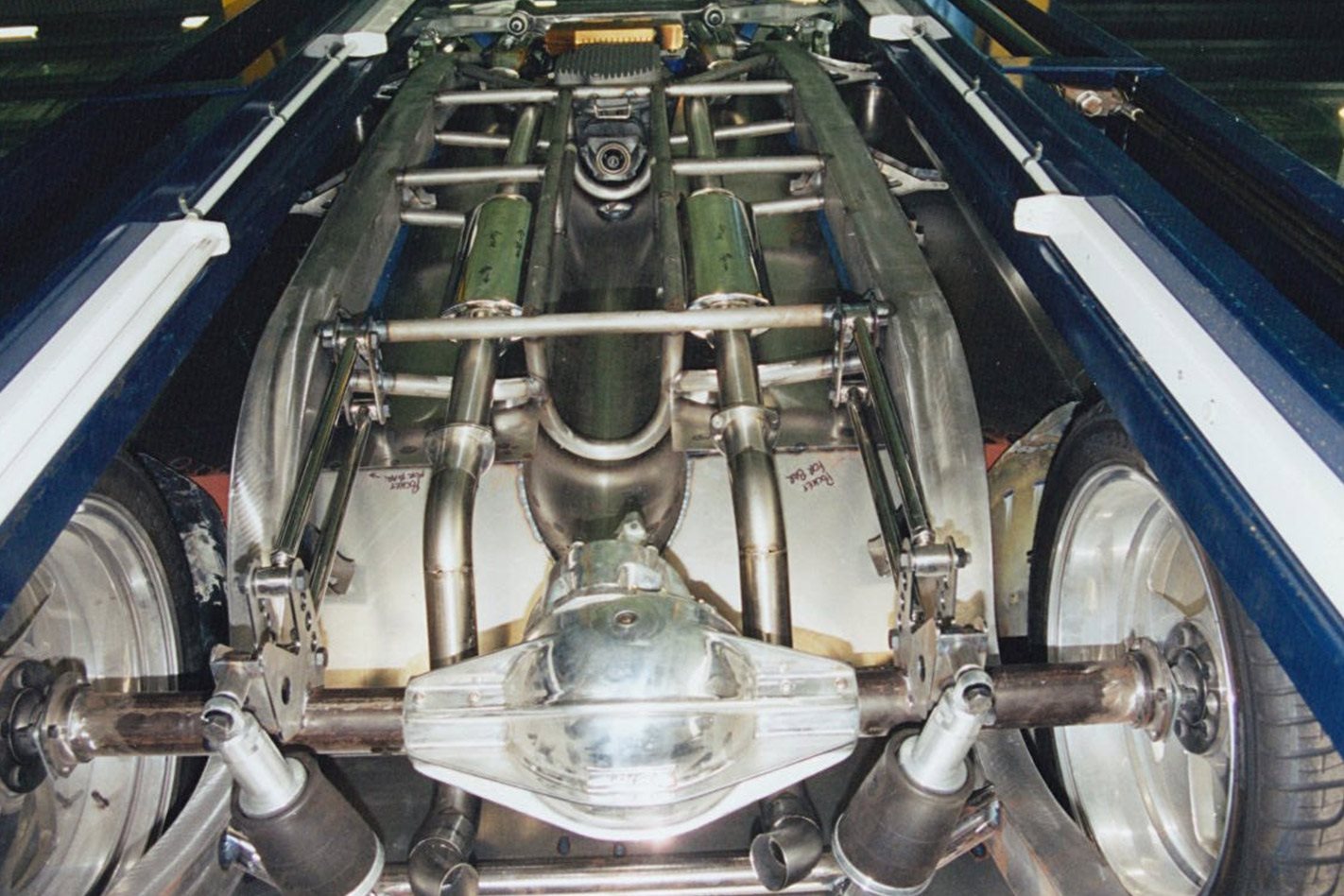 1. Chassis and undercarriage are one-off, with the rails fabricated to resemble the originals 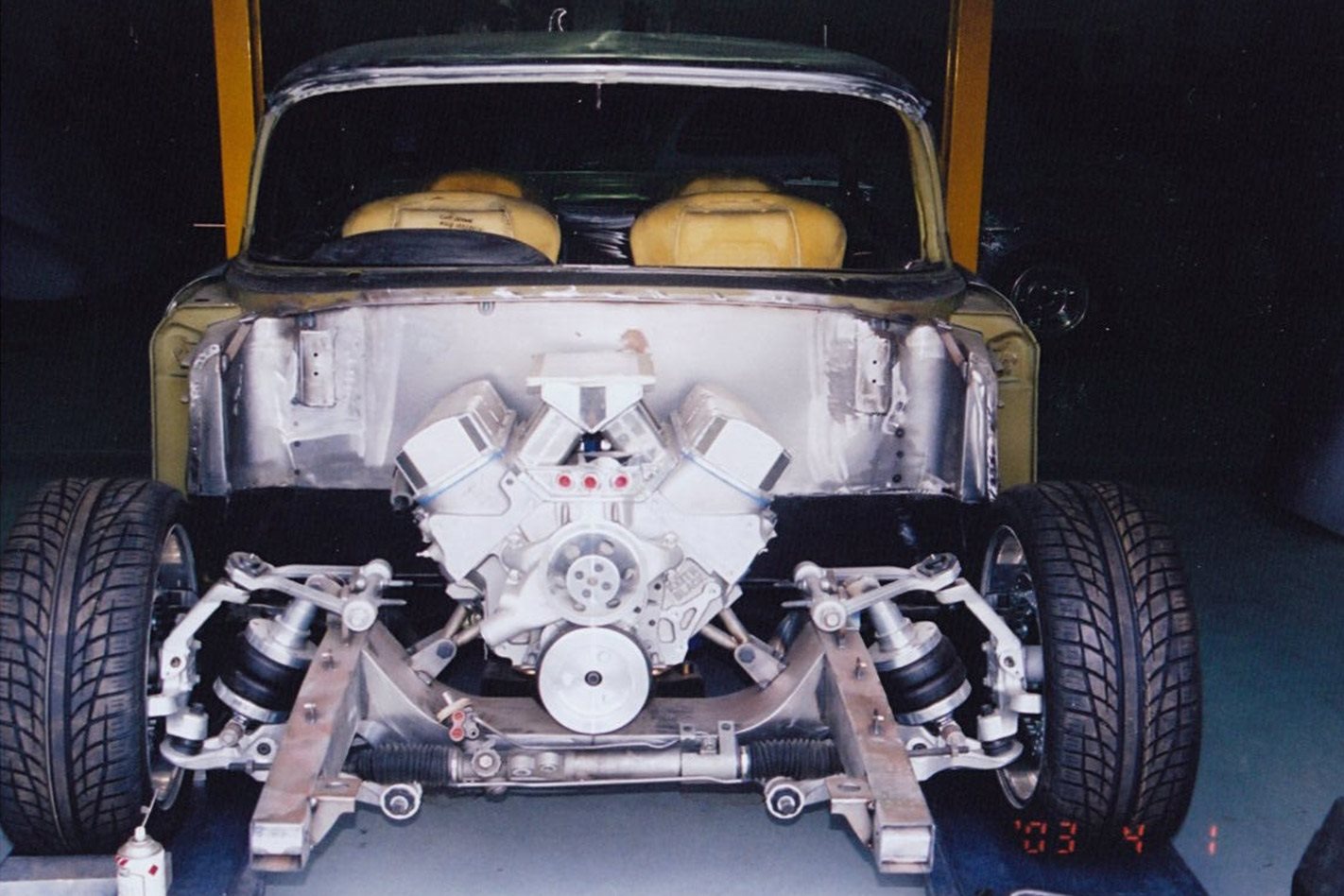 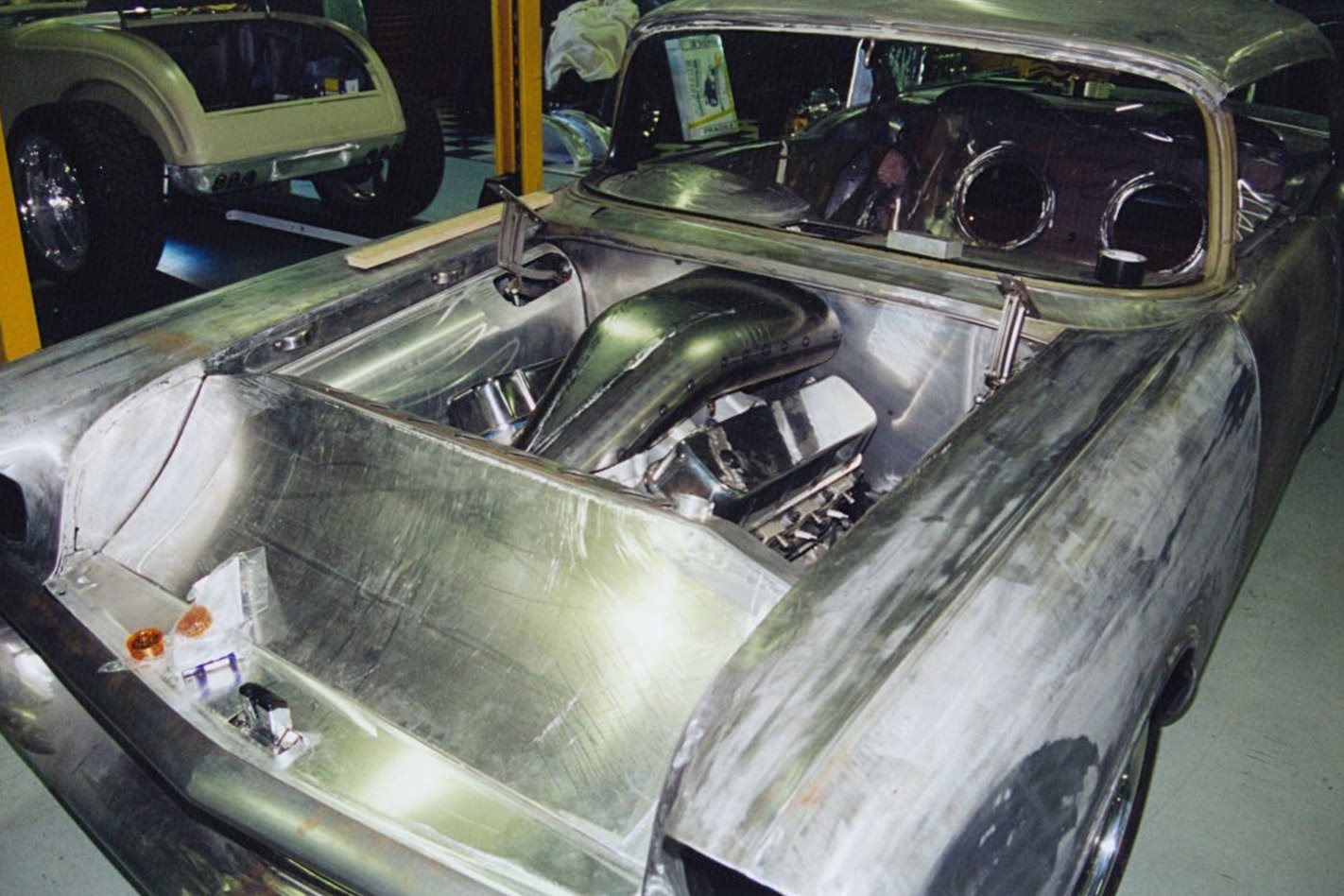 3. Custom inner guards, smooth firewall and specially made shrouding to push air over the inclined PWR alloy radiator are all fabricated from aluminium. Shown here is a cold air induction scoop, which was later dumped in favour of the old-school six-pack set-up 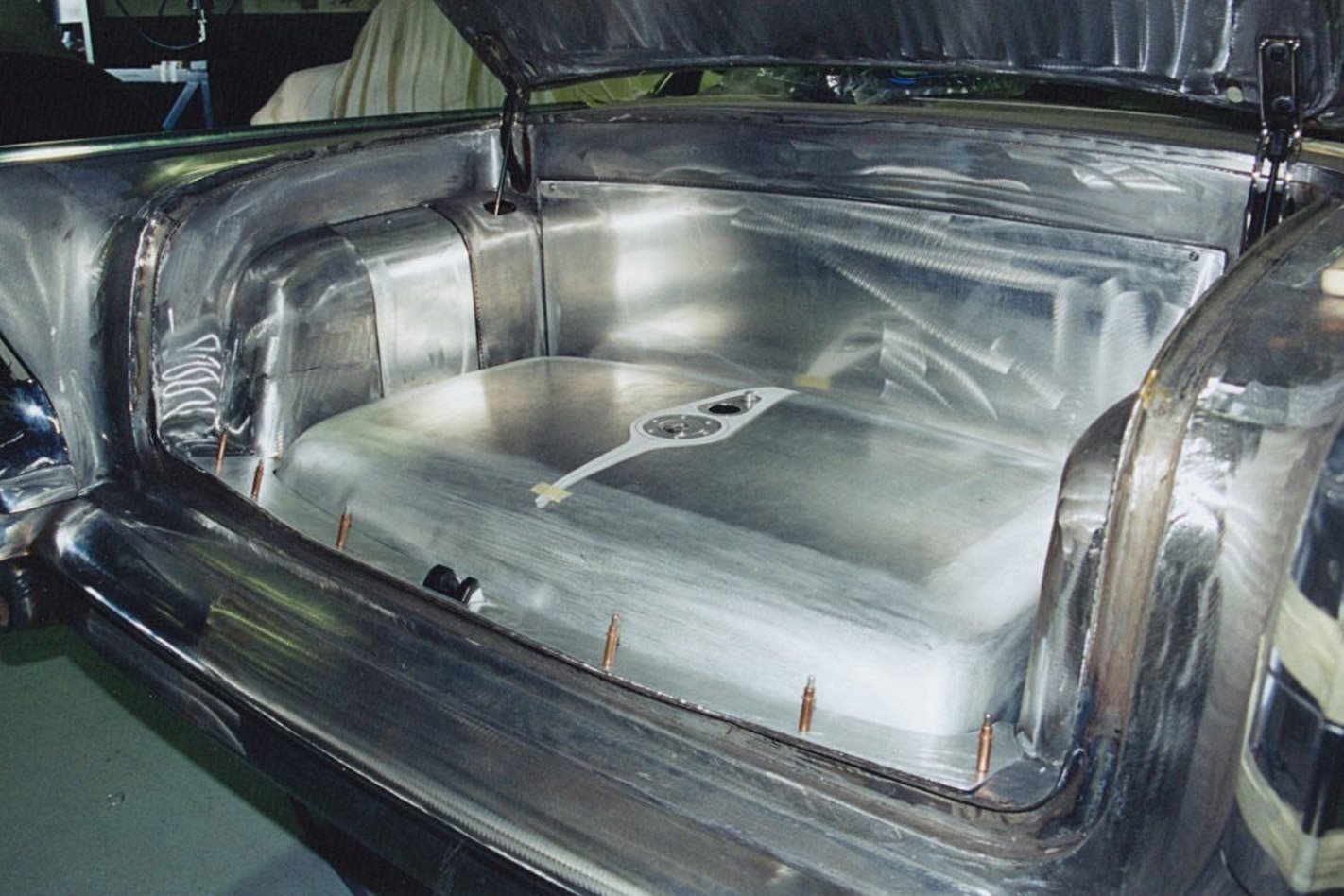 4. Boot is a one-off work of art, including custom side panels, with removable panels to access electronics and air system 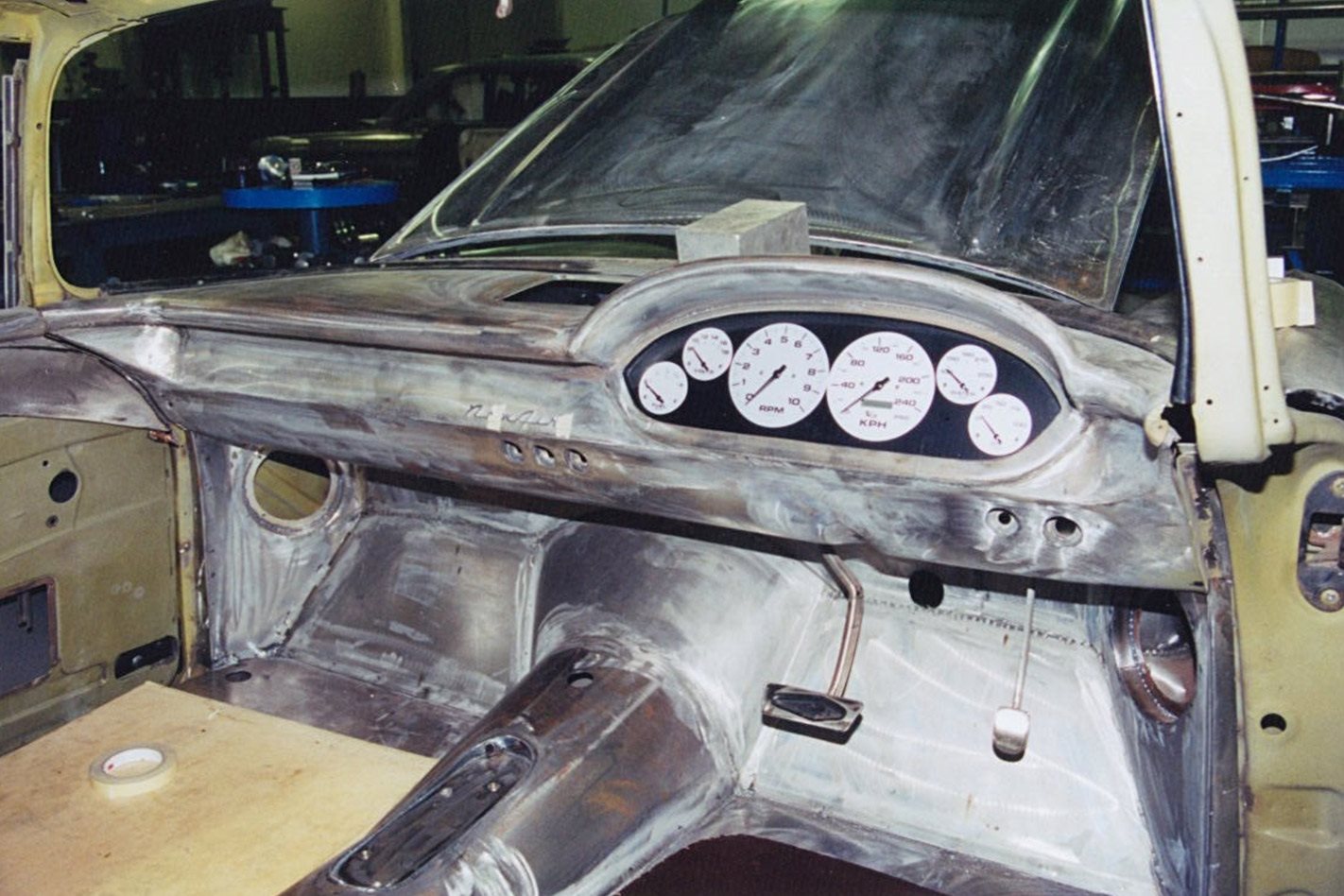 5. Dash is handmade to reflect the original, and all knobs are recessed. Power booster, master cylinder and Vintage Air system are hidden under the dash 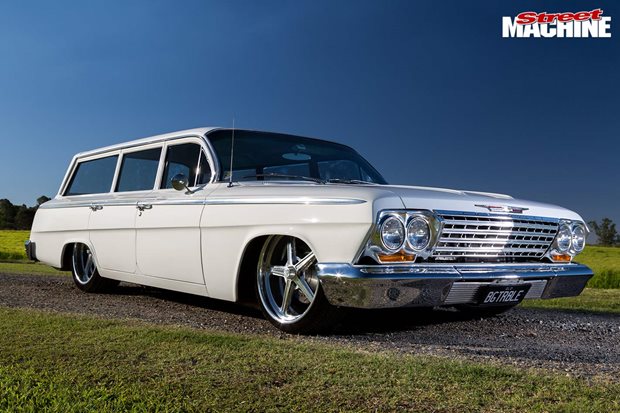