This article on Paul's Triumph was originally published in Hot Rod magazine no.17

OUT of the dozens of cool motorbikes that rocked up to the Boogaloo Invitational this year, Paul Kuhle’s ’70 Triumph TR6P was the one that stood out for me. I’m not saying it was the best bike there, but for me — as a car guy — this bike really resonated with me. If I look at a car, I can tell you if it’s got the wrong wheels on it, or whether the trim style or paint colour is wrong for the particular era that the car is being built to. I’m sure there are similar ‘rules’ to building motorbikes, and I don’t pretend to know what they are, but I’m pretty sure Paul nailed it with this bike. 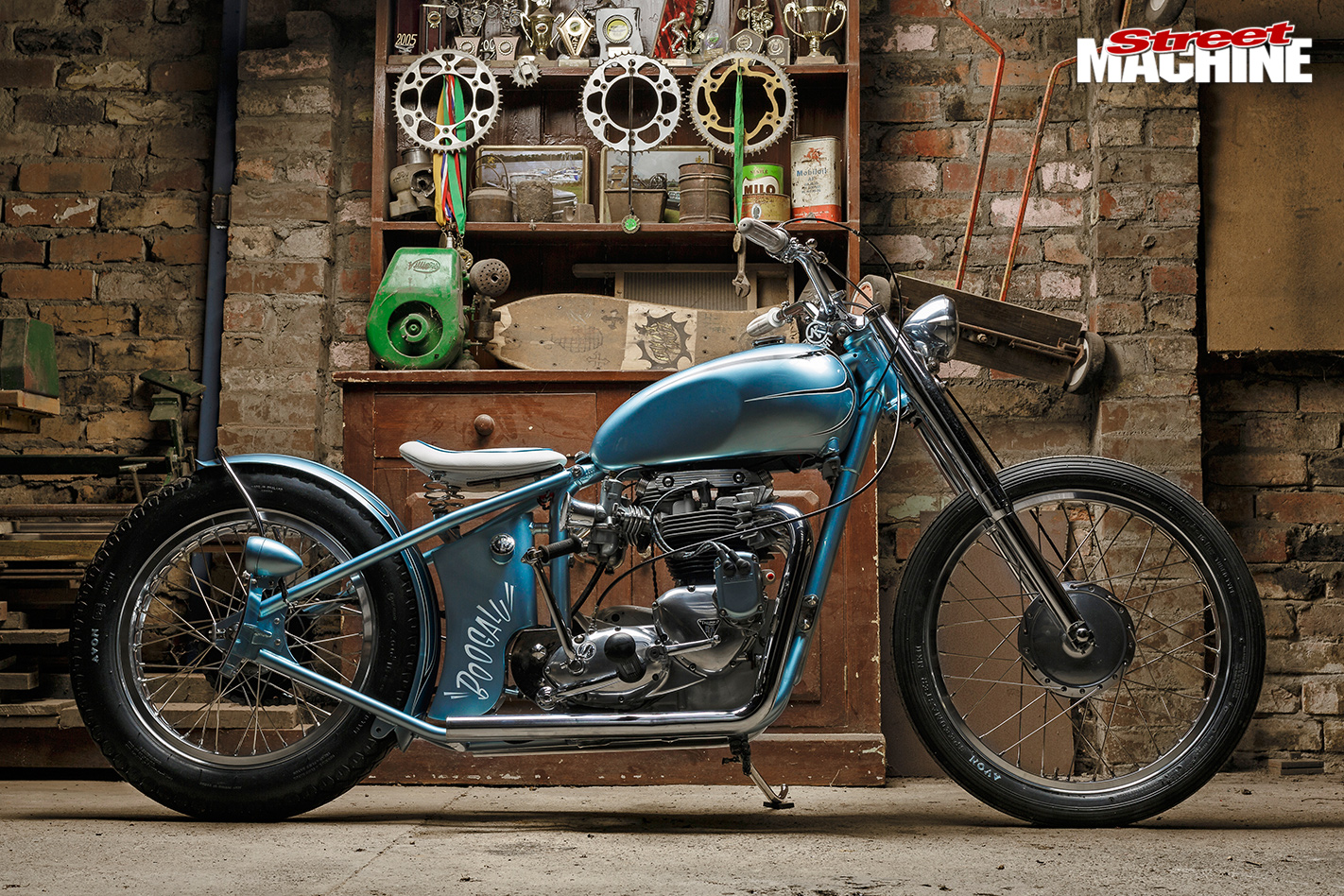 The bike originally ran a 16in rear, but Paul swapped it for an 18in for a taller and narrower look. Clean, simple and tough - all at the same time

If you’re a restorer, you might want to look away now as this is a TR6P, the P standing for Police Special. Designated as a 1970 model, the bike was actually built in December ’69, which I guess in Australia would be the summer of ’69 — but no need to break into a Bryan Adams medley just yet.

“When I first came up with the idea to build a cool 60s-style custom Triumph, I wanted to go all out and make it a full show style bike of the time with every nut and bolt stainless and turned [on the lathe] to look custom and everything else that was bolted to the bike had to be chromed. It had to be over the top and stand out,” says Paul. 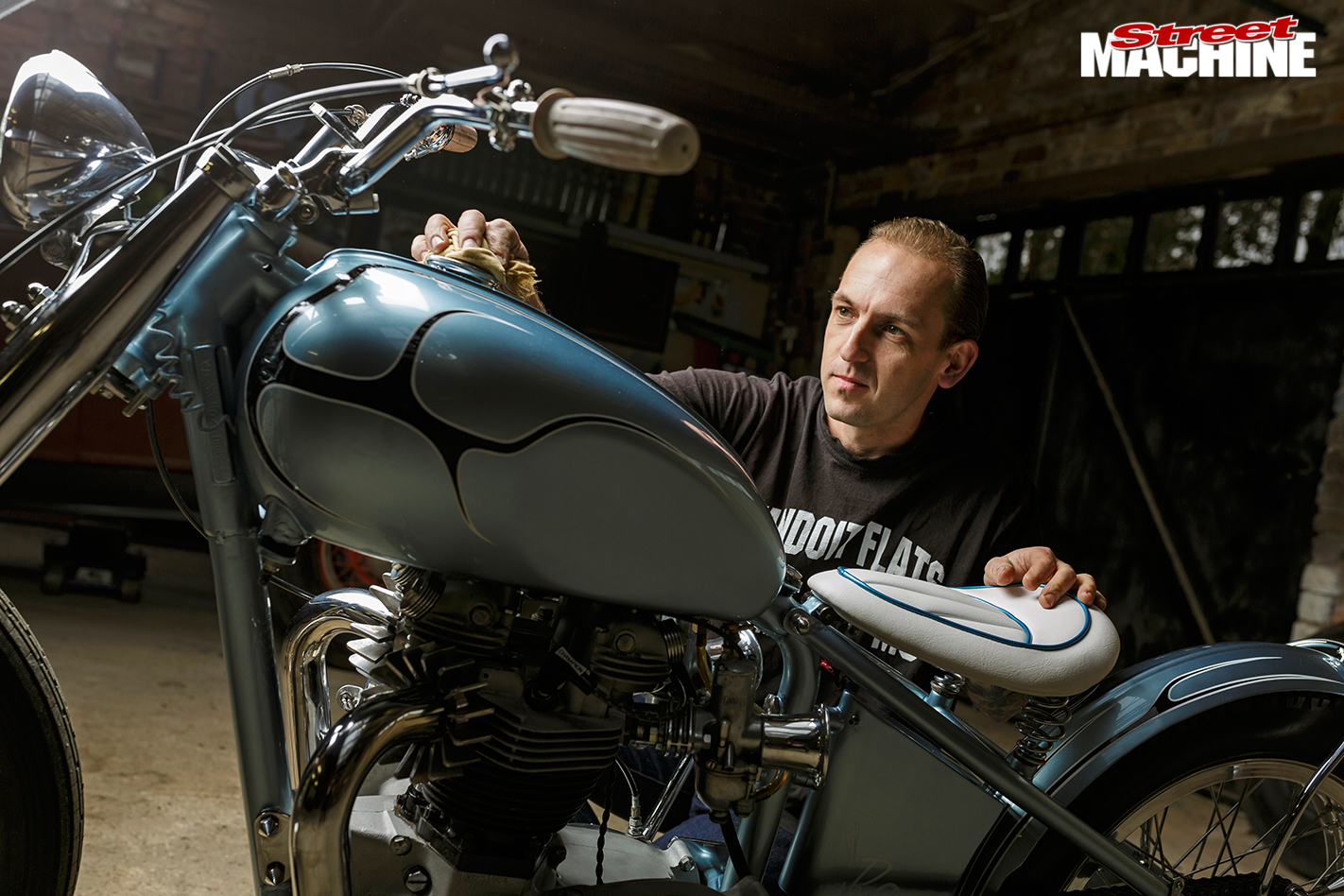 The scallops are completely different on each side of the tank

Well, obviously Paul’s plan worked as the bike definitely stands out, but I don’t think it’s over the top, not stylistically at least. There were plenty of other bikes at the Boogaloo with wilder paintjobs, massive sissy bars and stretched chopper front-ends, but what is over the top about Paul’s Triumph is his attention to detail and unwavering commitment to make everything as clean and simple as possible. In my mind it’s been built to the same philosophy as Cole Foster’s ‘Blue bike’, which opened the eyes of many hot rodders as to how cool a motorbike could be and was built with the same stripped down, hot rod style as Paul’s bike. “I love the look of old car brochures that have the car drawn low, with low roof lines and everything really tucked in and impractical. That’s the sort of bike I wanted to build, impractical but still actually ride it,” Paul says. 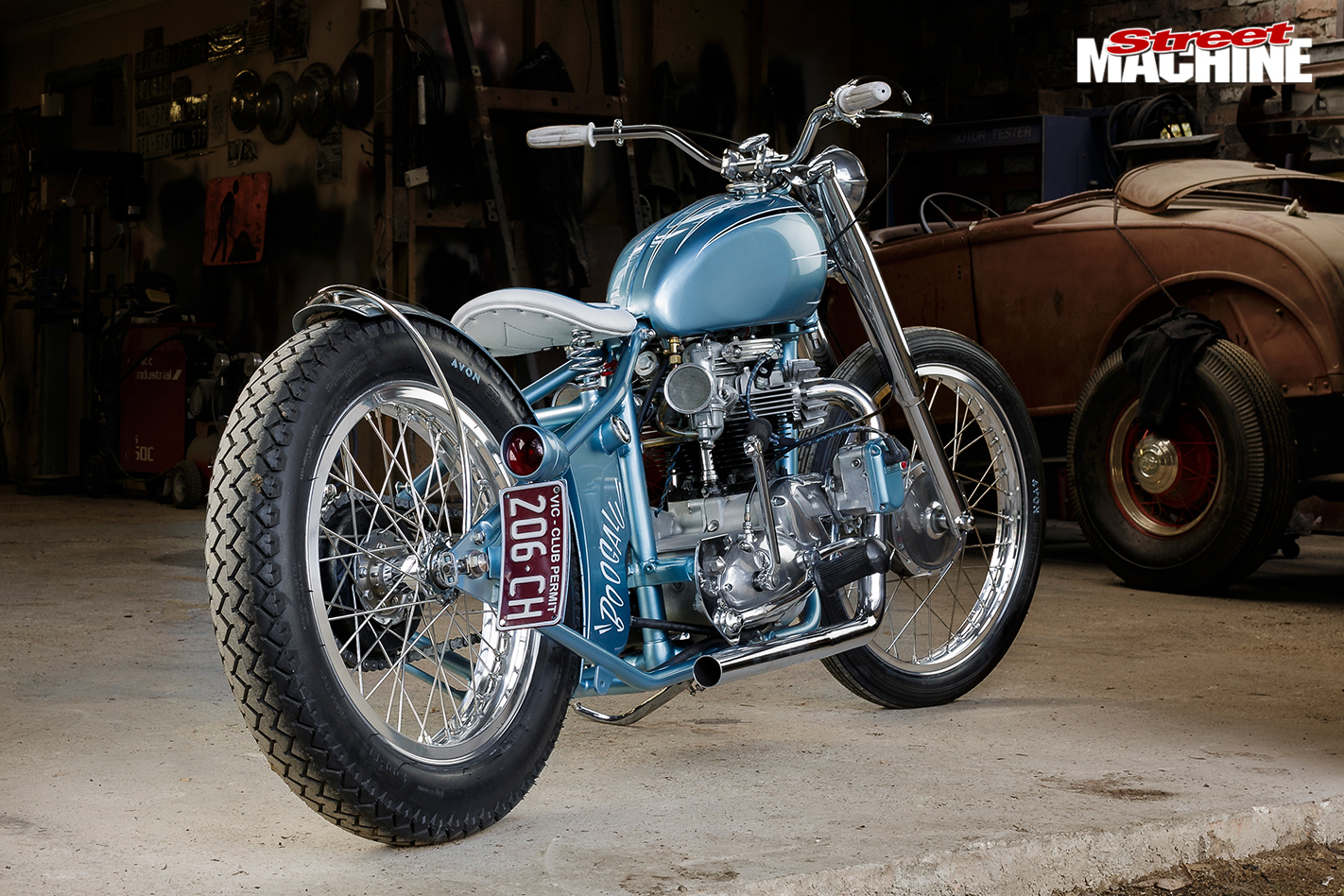 A bike came up for sale in Canberra that Paul knew would suit his build, so he did the right thing and asked the missus if he could get it: “I asked Eloise if I could buy it and she said I could as long as I tiled the kitchen. It was the quickest tile job I’ve ever done! The bike came with a heap of good parts, like the finned primary cover, finned carby spacers, 21in mini spool front rim and well, that was about it for good custom stuff. It also came with two hardtails that had been built by a blind bloke and the front loop had some of the worst welding and bog done on it I have ever seen.” Sounds like bike guys have the same struggles as car guys. 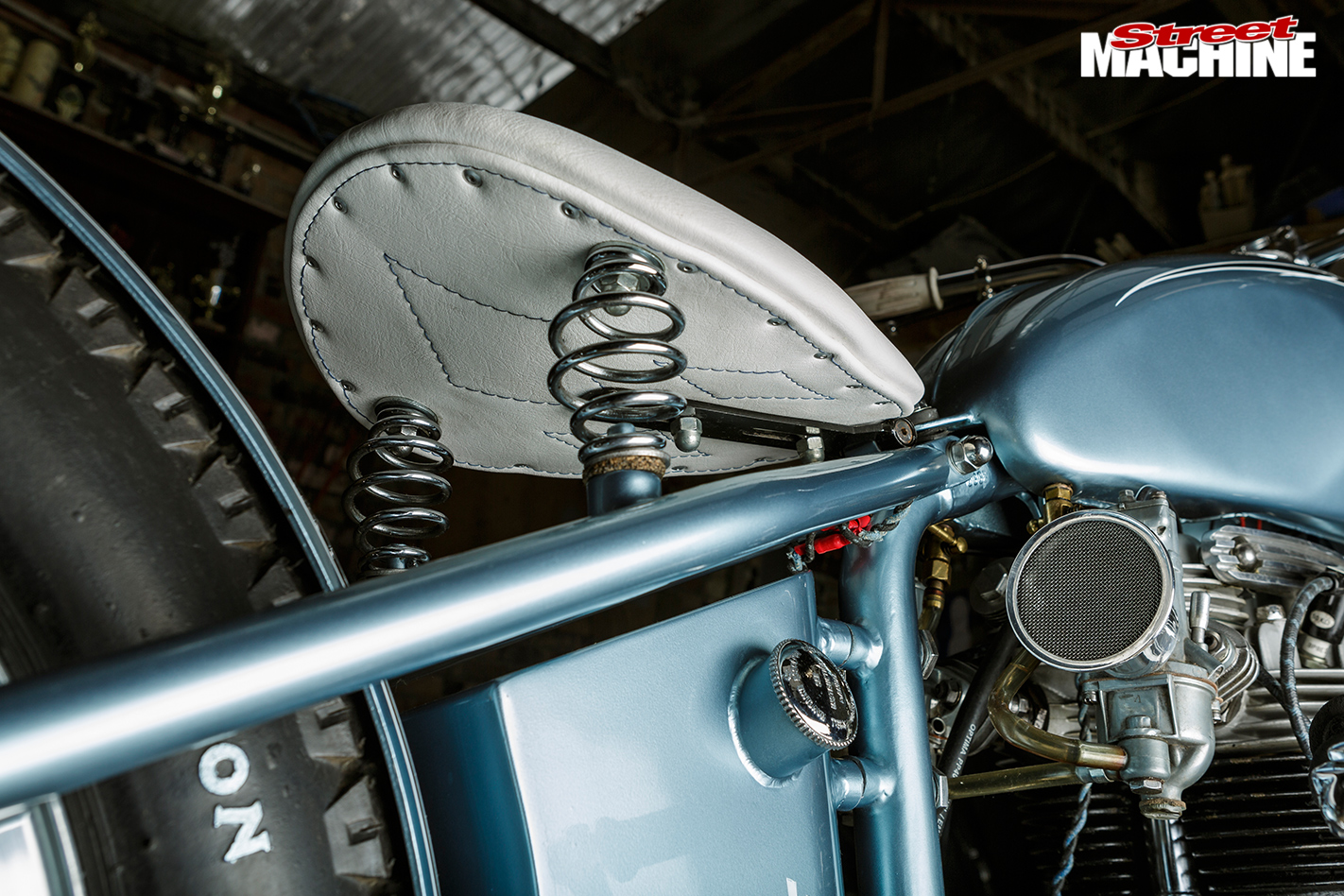 Paul’s plans for the bike involved a different look initially, something that kept a little more of the Triumph’s original character: “It had all the badges on it and I was going to paint the original stripes on, basically make it look stock but a meaner looking version of the original. That’s when I realised it deserved more than that. I figured that if I was going to cut up a matching numbers bike, I had to treat it a little better than that! I can’t wait to take it to the All British Rally in Newstead, a few old blokes are going to die when they see it.” My suggestion to Paul was to make a sign up that reads: Saved from a restorer. 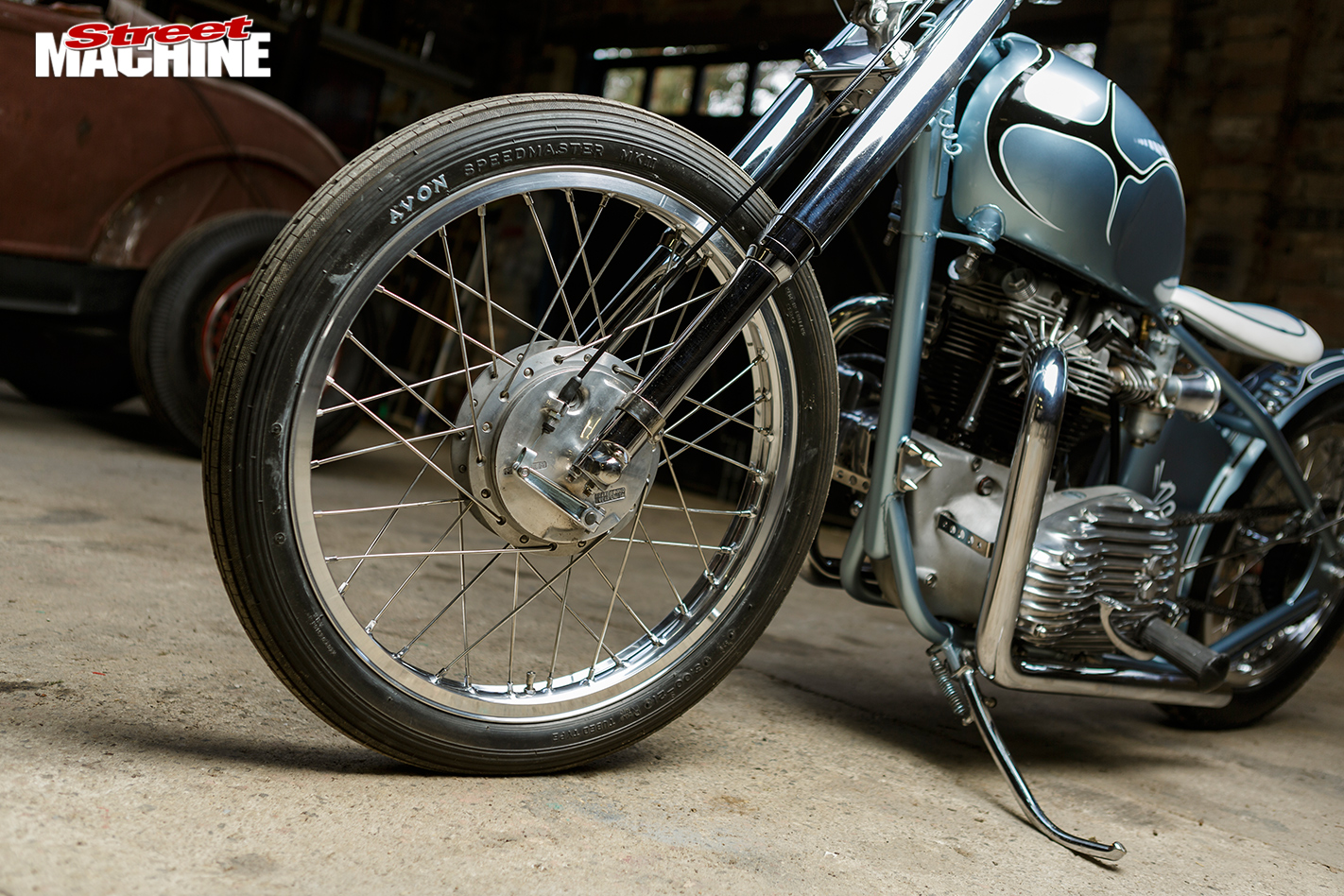 The rims are 21in and 18in Mudslingers. On the front, Paul had it laced to a drum brake off a late-70s PE Suzuki, which it turns out are made from magnesium and polish up real nice

Being the astute fellow that he is though, Paul did save all the bits that he cut off: “Everything that was on there that I didn’t need got chopped off. All the spring holders for the kick stand, every tag on it that I didn’t need to bolt on to went. I’ve got a nice little jar with all these cut off tags and lips and shit like that. If someone really wants to bother welding all of this back on, they can have it!”

As you’ve probably noticed in the photos, there’s a hot rod roadster lurking in the background, a natural progression in automotive desires that started with his first car, an EH Holden that he bought when he was 16. For Paul, becoming a motorhead wasn’t really a question: “My dad and my step-dad are both car and bike guys, so I don’t have a choice basically. When I was younger they asked: ‘You like cars and bikes?’” Turns out it wasn’t a question at all, more of a statement: “No. You like cars and bikes.” 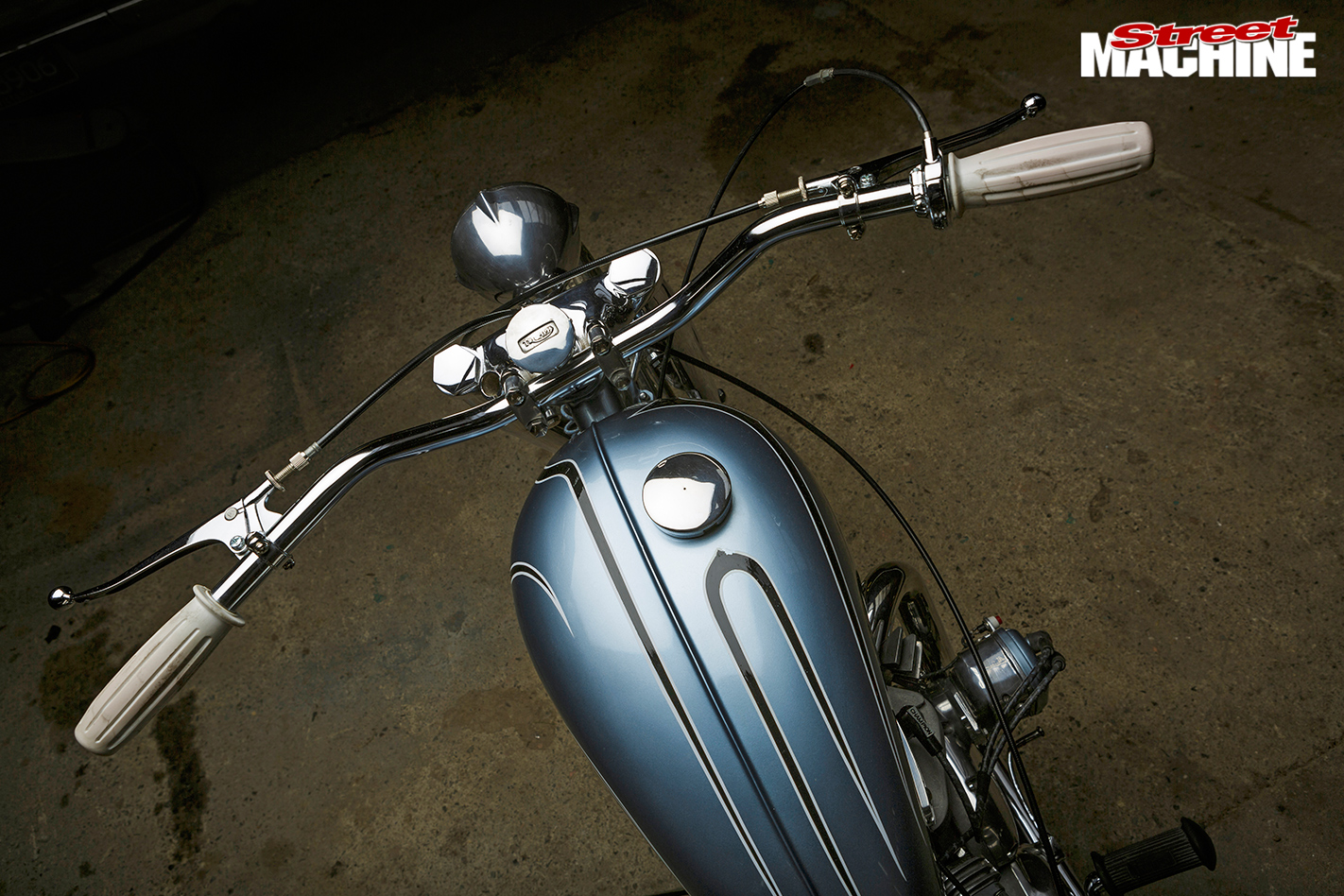 Obviously their influence has had quite an effect, not only in passing on the passion for anything with wheels, but also the skills required to do it. Paul did everything on the bike himself bar the trim on the seat, a little bit of TIG welding and the graphics — which were ably handled by our mate Ryan Ford. The paint on the other hand was all done by Paul.

“I got a shit load of sample colours and confused myself, so I went back to the paint shop, grabbed one of the books, looked at the colour for about 20 minutes under a fluorescent light and said: ‘That one will work nicely — I hope.’” What that actually means is, Paul has no idea what the colour is, but he knows he got it right. 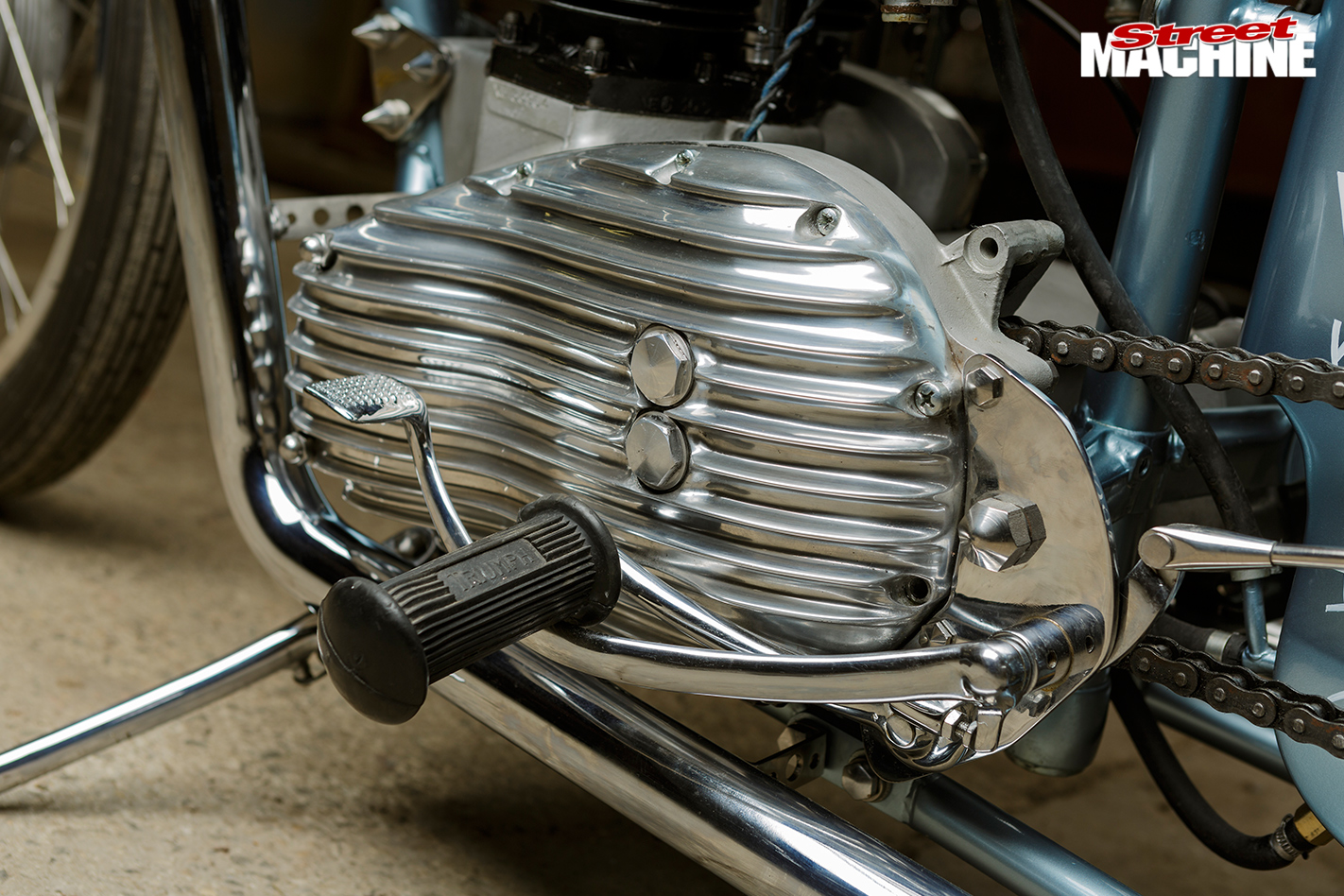 “I even say to myself, I nailed that colour. I reckon it suits that bike down to a tee. You get the bikes with black frames and far out paintjob on the tank — and I like that look — but I just wanted that real elegant look.”

When it came time to add the final touches to the paint, Paul knew he could trust Ryan’s judgement. The guy just gets it. “I told him the style I wanted and he told me to leave it to him and he would do it as though it was his bike. When he rocked up to my place he had a look on his face that said, I know he’s going to like it but it’s gonna shock him. My first thought was; Why the fuck is it not symmetrical? But it fits the lines on the tank and rear guard perfectly, he really knocked it out of the park.” 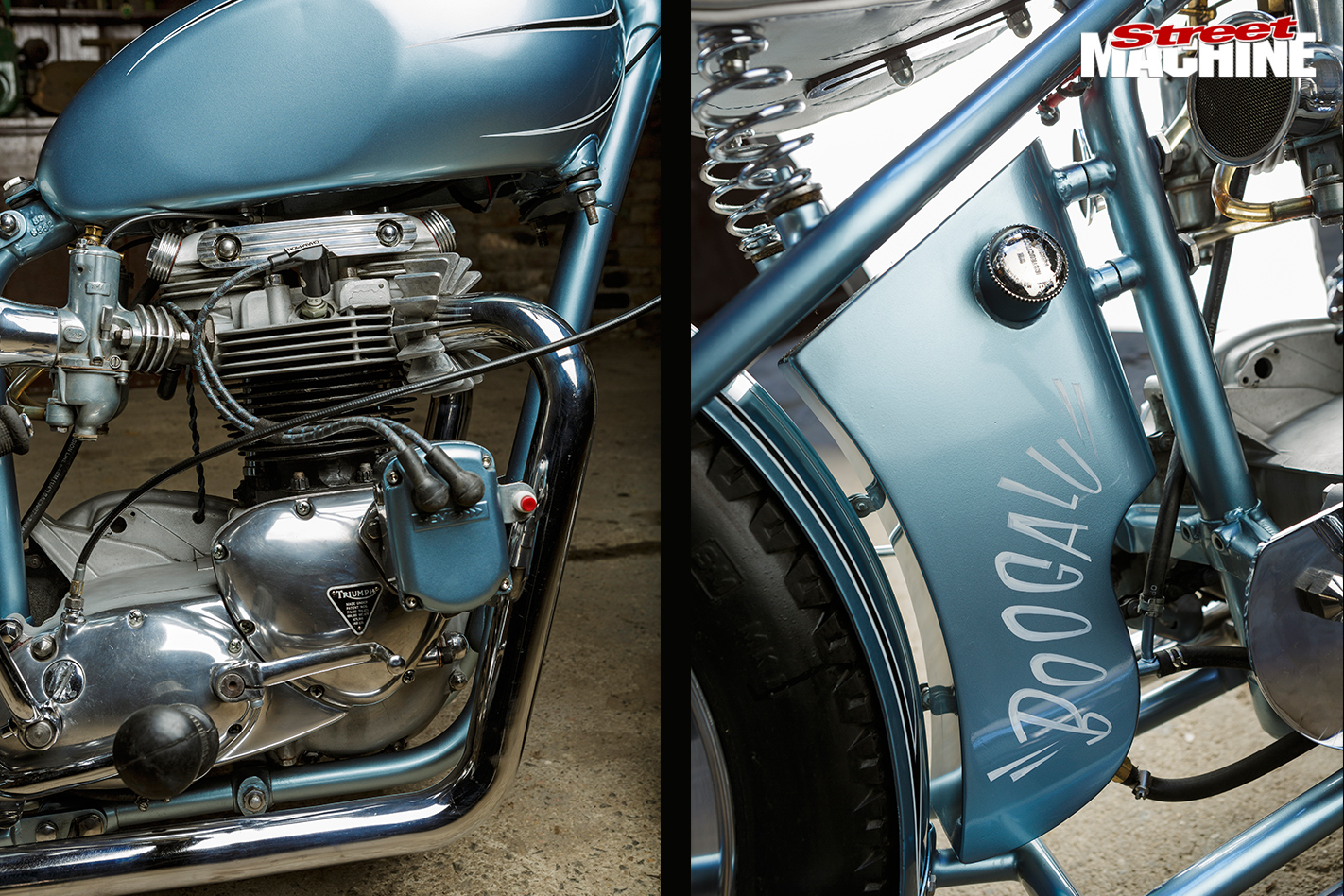 [Left] The engine is pretty much stock apart from a 20-thou clean up, but Paul reckons it goes really well. [Right] Boogalu - named after Paul's daughter Lulu, who he calls Boogers

Rocket Custom Auto Trim did the seat: “I gave him a rough idea of what I wanted, but like Ryan, he’s good at what he does so I let him make it to fit the style of the bike. He even stitched blue diamonds into the underside, which are really cool if you’re laying on the ground to get a look at them.”

What’s great to see is that Paul is passing on his skills as a high school trades teacher and one of the few other people that helped out was Jake Szabo from Shift Fabrications, a former pupil of Paul’s and an excellent TIG welder. He came in real handy when Paul finally got the oil tank right on his third try. No leaks now! 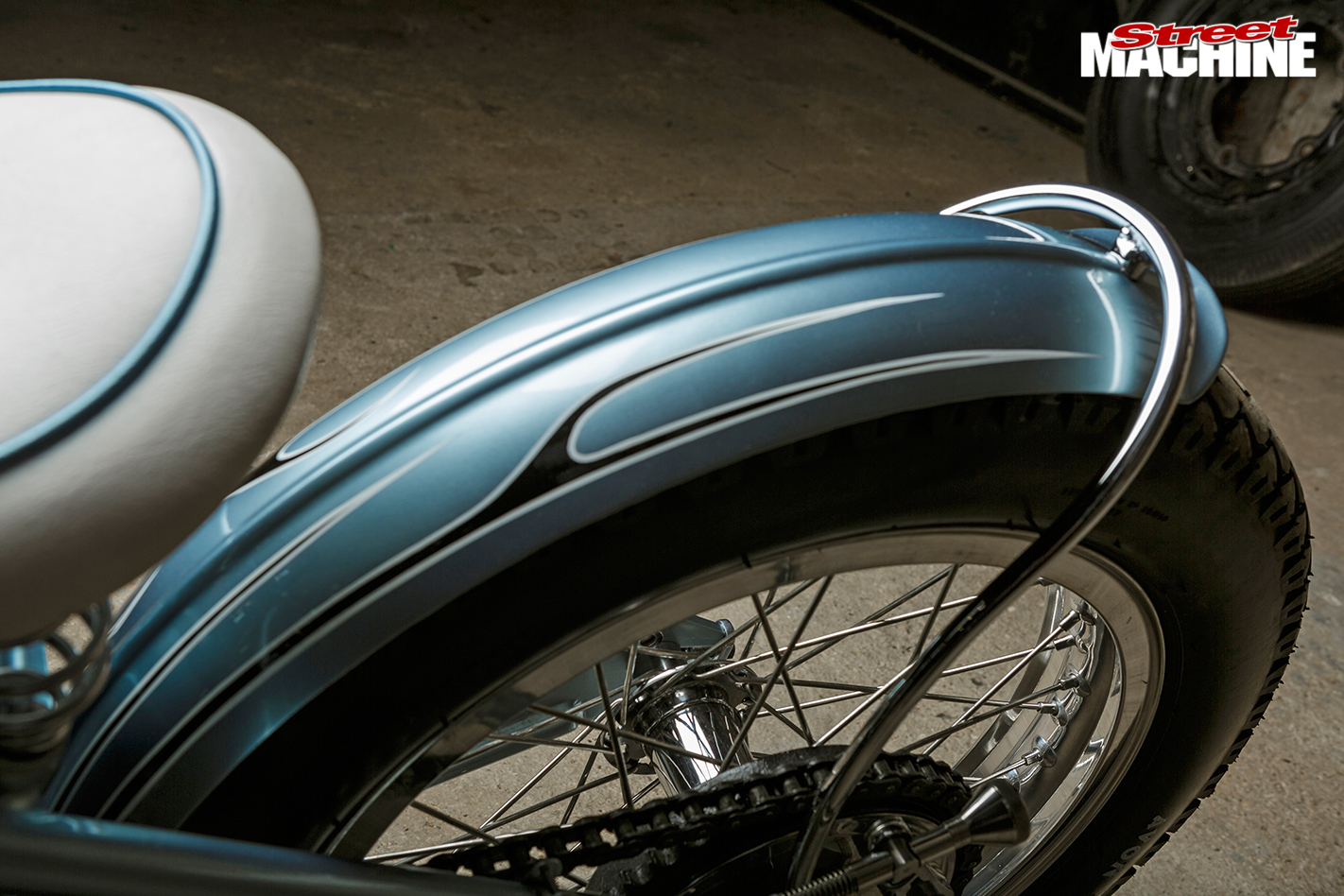 In a few years when I might know more about the intricacies of motorcycle styles and trends I may look back at this and wonder how I could have been so wrong, but I don’t think so.