With their stunning custom Holden HQ Monaro, this father and son team proves that the family that plays together stays together

ASK any modified car nut what it is about the scene that they appreciate the most, and more often than not they’ll tell you it’s the people. The folk you meet through building and enjoying cars make all the stress worthwhile.

Families are the most important folk of all and if you ask Tim Bartrop — the elder half of the father and son duo responsible for this stunning HQ Monaro — he’ll tell you that the hours he and his lad Nick poured into the car have been invaluable in solidifying their relationship. What’s more, they reckon they’ve gained a heap of great mates as a direct result of the build.

“Many of the people who assisted us with the project have become friends due to the commitment required and the level of quality we expected. We now have a terrific group of friends from building and displaying the car,” Tim says.

That quality standard was so high that the notoriously hard to please Summernats judges awarded the car a Top 20 berth on its debut at ’Nats 24, despite the fact that it was unfinished at the time.

“We’d been talking to Owen Webb about unveiling the car at Summernats, so it just had to be there,” Tim explains. “There were dozens of things that weren’t the way we wanted them, and I’m sure that the judges picked up on at least some of those. Straight after Summernats we tore half the car to pieces and made more than 60 improvements, which is why we’re so keen to take it back. We’ve tied up a lot of loose ends, listened to the judges and made changes based on their feedback.”

Owner-built fibreglass sub box houses a pair of 12in Alpine woofers, with amps recessed into either side

What makes MR HP really unique is not that it was built by a father and son team but how Tim’s traditional ideas came together with Nick’s modern influences to arrive at a finished product that’s a real melting pot of old and new car-crafting. There was no compromise involved in the overall direction, however, because they agreed that it should be geared towards regular and reliable street use. You can bet that the odometer is going to cop a fair old workout once the car’s tour of duty as a showpiece wraps up.

The street-oriented approach is refreshing in an elite-level ride, and without a metal mountain protruding through the hood, no cavernous tubs filled by massive wheels and tyres and no wild body mods to speak of, it’s the impressive level of detail that does the talking.

The level of detail under here is superb, with the smooth-as-silk floorpan and beautifully crafted stainless steel twin exhaust system the highlights. Driveline and trailing arms are coated in contrasting HOK

The ride height is practical, the Billet Specialties wheels measure in at a sensible 18 inches, and while there are plenty of subtle changes to be found, the classic HQ coupe bodyshell has not been compromised.

The skilled professionals responsible for the superb finish are Todd from Rocksolid Autobody, who took care of the panel work, and Paul from PE Customs who laid down the faultless House Of Kolor Suntan duco.

While it’s the one-off cold air intake that grabs your attention, there are plenty of other engine bay highlights such as the flat firewall, billet bonnet hinges and moulded inner guards. Alloy-headed 380hp small-block provides plenty of mumbo for a street car

The engine bay is a continuation of the marriage of old and new-school mods. A casual glance suggests a late-model multi-throttlebody injected V8 beneath the fabricated cold air intake, but it’s got a much more traditional heart — a carby-fed 350ci small-block Chev.

“While we wanted an old-school 350, we also wanted to make it look like it had EFI,” Tim says. “We built the intake with eight imitation intake pipes but while they fill out the top of the engine, they’re not functional. The two main pipes that extend out the front have filters on them but to most people who look at the engine, it’s a bit of mystery.”

The donk itself is a 380hp crate engine with quality internals, including Speed Pro forged pistons and Crower rods, plus Vortec alloy heads and a hydraulic roller cam. An Edelbrock inlet manifold and carby combo hide beneath the unique custom airbox, while at the other end of the combustion process is a set of hand-built headers that funnel the spent gases south through a stainless steel twin exhaust system.

The Turbo 700 four-speed auto and 3.7:1-geared nine-inch diff were also clearly specified with road miles in mind although — like the rest of the undercarriage — they’re detailed to within an inch of their lives.

A great advertisement for going to TAFE — that’s where Nick picked up the fibreglassing skills to create the console and gauge cluster. Front seats are Nissan X-Trail refugees

The cabin has a contemporary feel, with extensive use of fibreglass. The ’glass work looks like it’s been performed by a seasoned pro but after completing a TAFE course on basic fibreglassing, Nick fashioned the custom instrument cluster, centre console, parcel shelf and sub enclosure himself. Not bad for a beginner, eh?

The custom fibreglass work continues through to the back, where the original seats got a makeover and were wrapped in the same orange leather that extends throughout the cabin

The cluster sits in a custom sheet-metal dash that houses a stack of Auto Meter instruments, along with the touchscreen head unit that feeds tunes to an integrated Alpine audio system.

Billet furnishings are everywhere you look, from the Billet Specialties steering wheel to the door handles and window winders, the Lokar shifter and the all-important cup-holders, which reside in the custom console. Front seats are from a Nissan X-Trail of all things, while the standard HQ coupe rear seat has been extensively modified and trimmed, like the rest of the cabin, in orange leather.

“It’s a street car that got out of control,” Tim says. “It’s all about balance — we didn’t want any one aspect overshadowing the fullness of the car, and we didn’t want huge wheels or a super-loud exhaust. We just kept going to big events like Summernats and MotorEx and getting ideas, and as we did that, the car kept getting more and more serious. We’re glad that it did though, because we’re extremely happy with how it turned out.”

WHO IS MR HORSEPOWER? 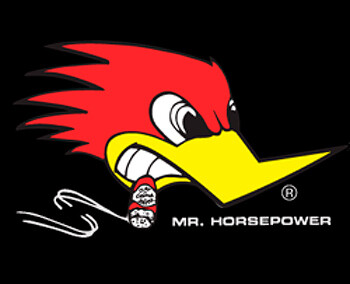 Tim and Nick’s Quey is named after Mr Horsepower, the cigar-toting logo of Clay Smith Cams. The logo, said to be a caricature of Smith himself, features subtly throughout the car, including the engine, dashboard, boot and driver’s side front quarter panel. “The car was always going to have a theme, and midway through the build I was reading a magazine and spotted the Mr Horsepower roadrunner and thought it’d make a great theme for the Monaro. The next week we ordered the ‘MR HP’ plates,” Tim says.