THIS article on the Sacilotto family’s EH Holden ute was originally published in the June 2008 issue of Street Machine magazine.

WITHOUT a doubt, this clean and simple EH ute was one of the stand-out cars at Summernats 21. Its custom-mixed violet paint was something different, even in a sea of stunning hues. 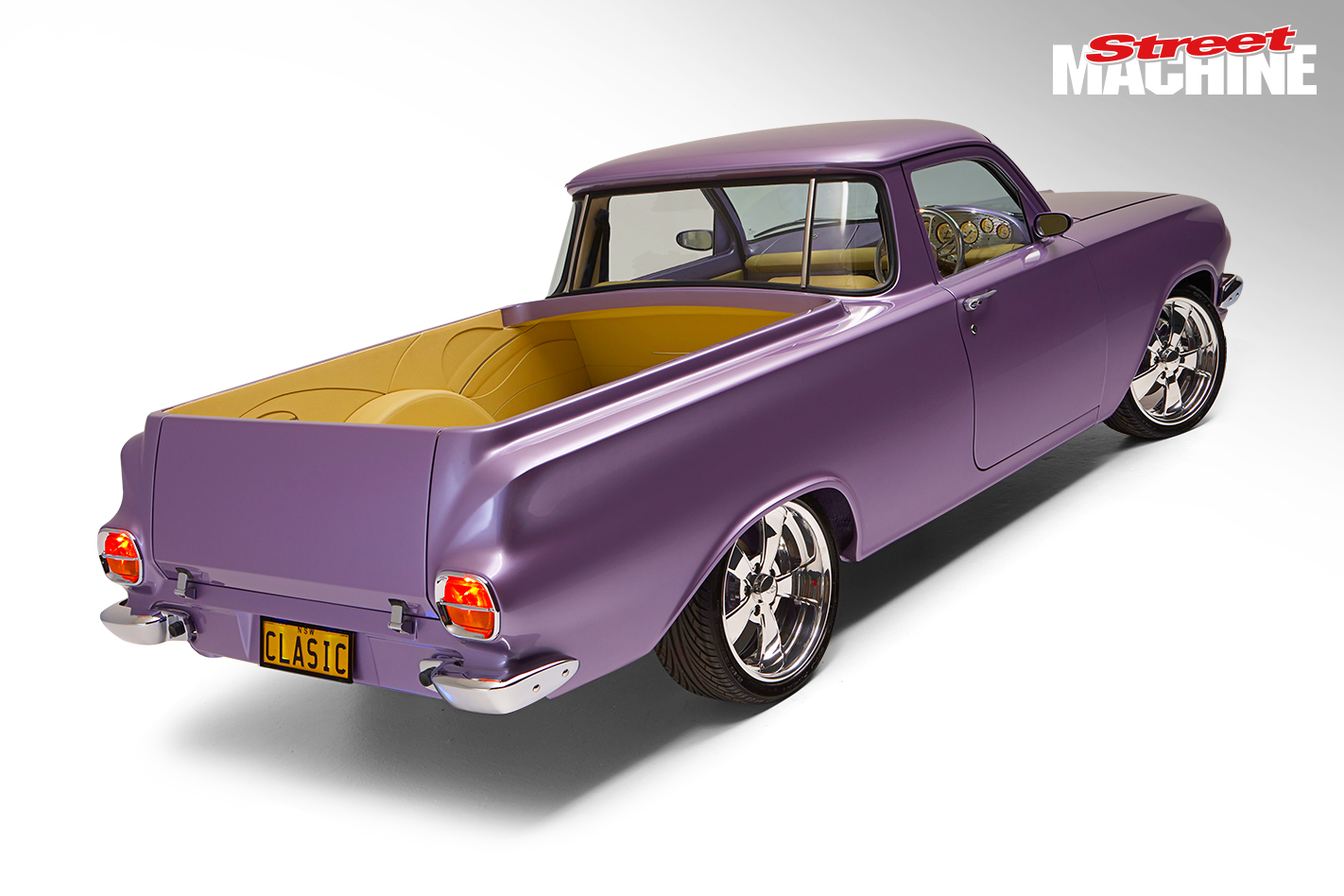 If you’re into EHs, especially retrotech versions, then you’re probably familiar with the Desisto name. These brothers have built some of the nicest EHs to hit the streets since the early 90s. They’re also family friends with the Sacilottos and had a major part in the build of Ben’s sedan (SM, Mar ’03), a two-tone blue and white beauty that featured small-block Chev power and Center Line Trigon wheels. In that issue Ben mentioned his next project: “It’s a ute with a supercharged V6. We reckon it’s got Top 20 potential.”

He got that wrong; the car earned a Top 10 plate and Top Ute/Pick-up at Summernats 21. Good going for a car that was just meant to be a driver. Unlike a lot of the cars you see in Street Machine, this ute started off as a pretty tidy unit and was a gift from the Sacilotto children to their father. 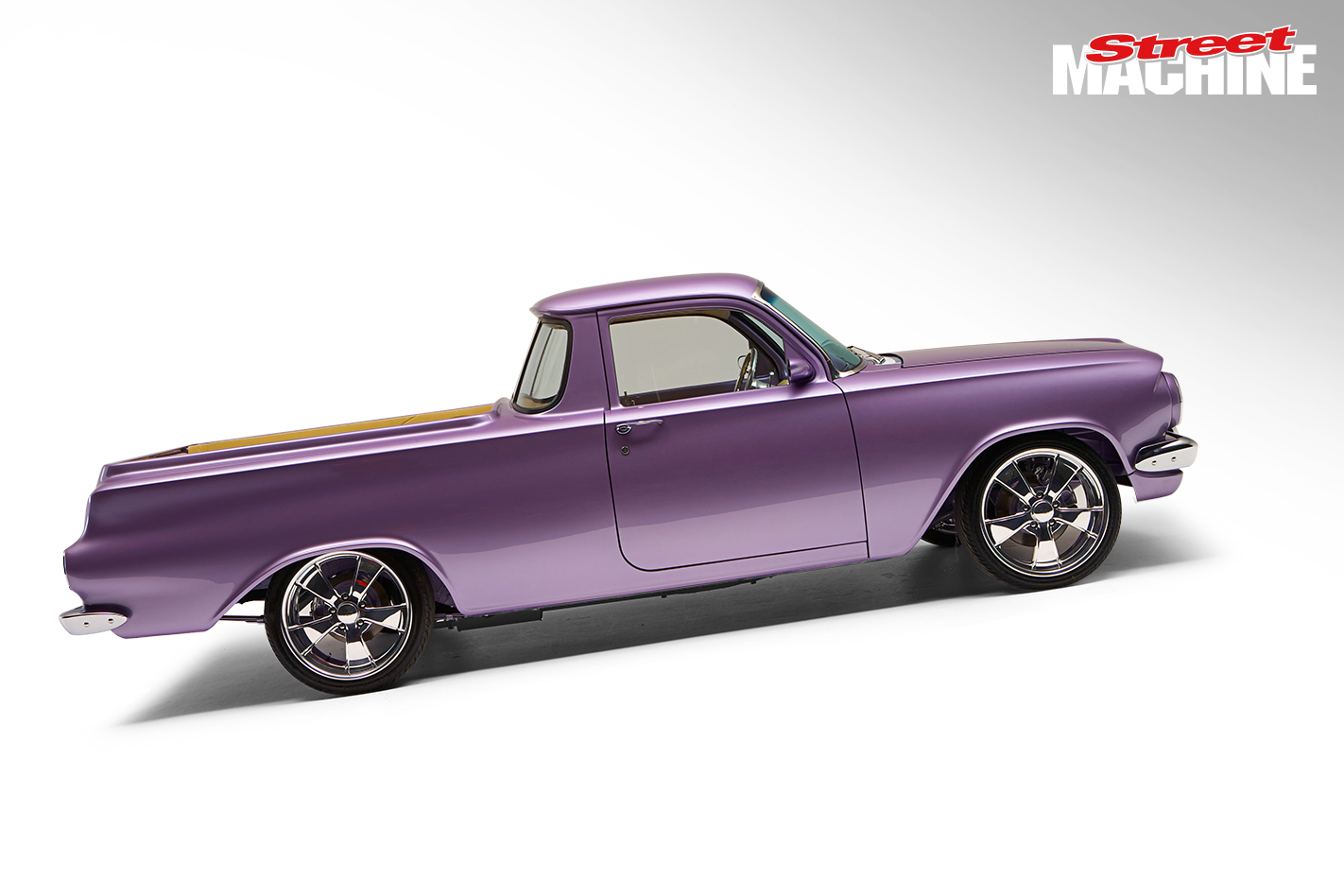 “It was a similar colour to what it is today. It had a 202 stroker and drove pretty hard but tuning the Webers was a nightmare. What was supposed to be a lazy Sunday driver became a Sunday risk, hoping the ute made it home under its own power and not on the back of a tilt tray,” Ben says. In 2002, they thought it was time for a bit of a freshen up: “We took it off the road to raise the ride height, fit new wheels, fix the gaps and do a few minor rust repairs. That turned into a full ground-up rebuild and became a five-year project.” 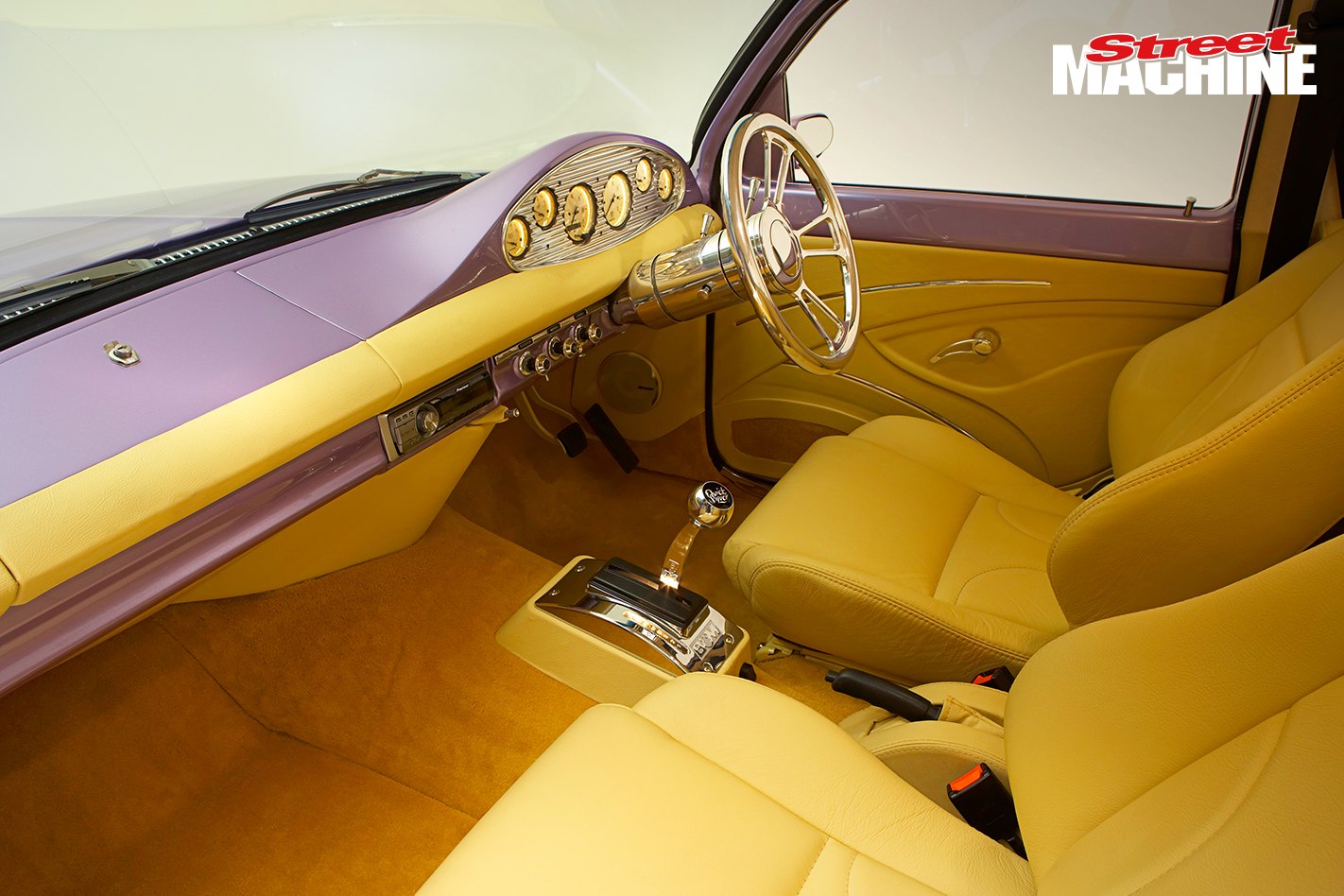 The hardest choice was whether to retain the violet — a Toyota Starlet hue — or update to a colour off current showroom floors. The majority of the Sacilottos and all the Desistos were keen to change the colour. “Arno [Ben’s brother] stuck to his guns, even when everyone else said violet would ruin the project. So far we’ve only met one person who doesn’t like it. At Summernats, most congratulatory comments were about the colour — particularly from females.”

The colour is slightly different to the original as Sebastian Desisto couldn’t find the paint code but he found something close and tweaked it to the Sacilottos’ taste. To get a 44-year-old car looking this nice takes a lot of work and most of that can be attributed to Sebastian. “He worked every weekend for the past five years like it was his own car. Perfection was his goal. Most of the modifications were his idea and they usually go unnoticed,” Ben says. 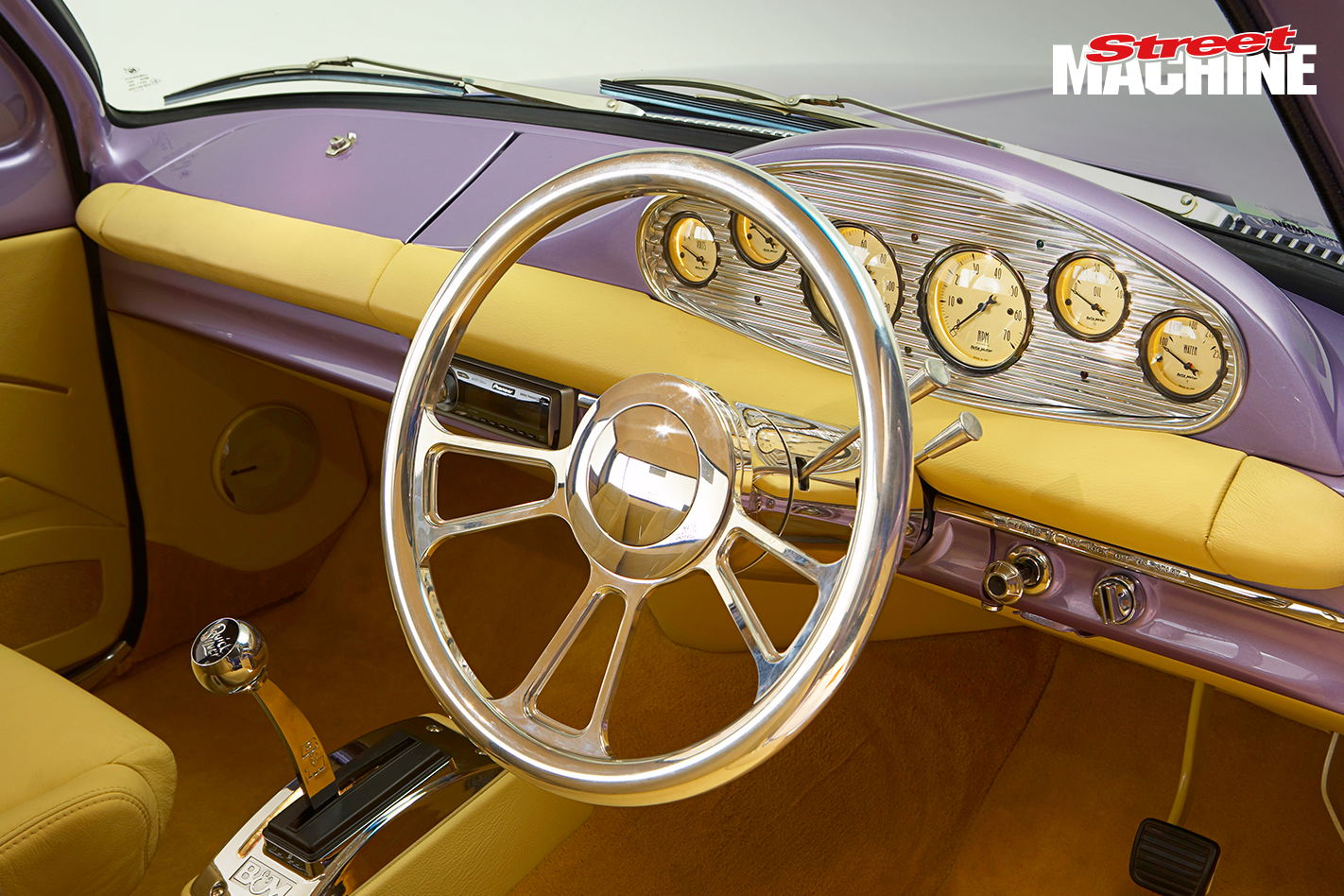 Of course, if you can’t tell that something’s been modified, then it’s a job well done. Those changes include welding the spare-wheel door shut, recessing the rear number plate, adding one-piece glass and motorcycle mirrors, plus seam-welding and smoothing the engine bay. One of the touches that’s often overlooked until it’s pointed out is the grille. EH nuts know that stock grilles are made up of thick and thin bars. Not this one.

“They’re all thick bars in this grille. A stock grille only has three,” Sebastian says. Which meant they needed three standard grilles — and plenty of work — to make this one. The only real deviations from stock on the body are the one-piece glass — electric of course — and those motorcycle mirrors. Sebastian got that idea from Drago Ostric’s Gemini (SM, April ’02), so he asked what motorbike they were off, hunted down a pair and modified them substantially to fit. 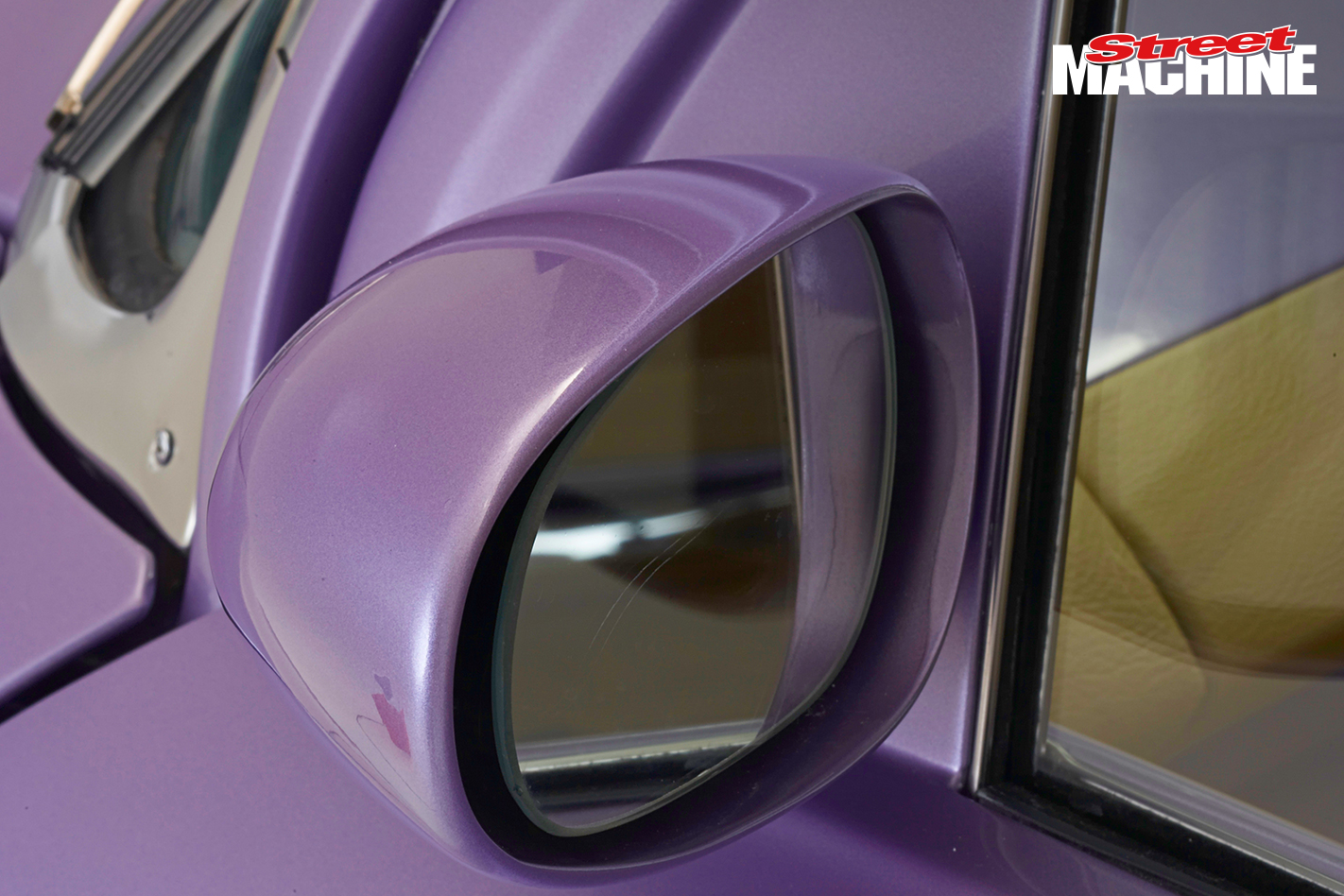 When it came to power, retrotech was the only way to go. “We wanted reliability and the best choice was a Holden engine. At first we were leaning towards a five-litre but we wanted to be different and opted for a supercharged 3.8. It had to be blown as we wanted as much get-up-and-go as any small-block V8. I’m pretty sure we’ve achieved that,” Ben says. 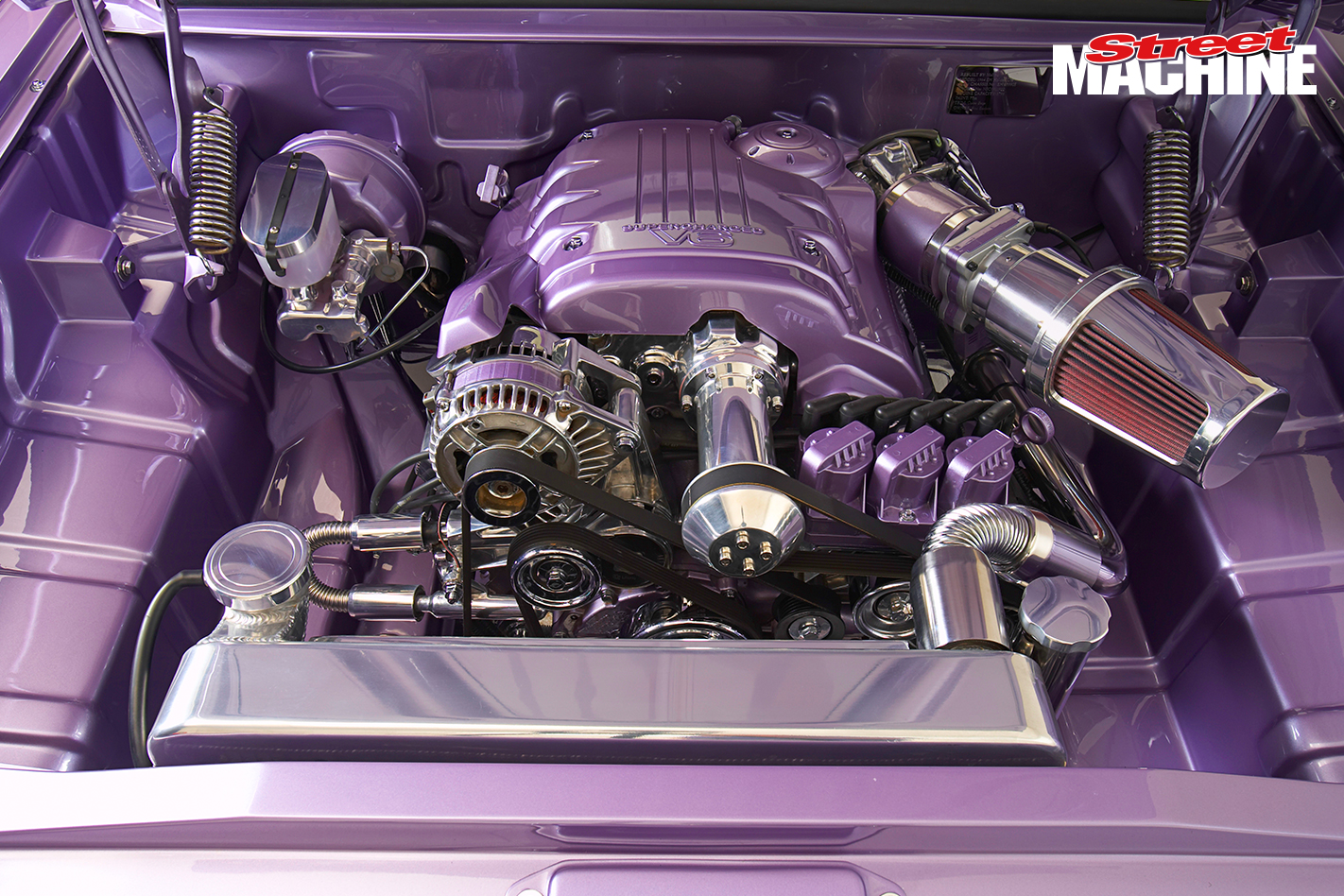 The engine was bought as ‘a good, rebuilt unit’ so with everything painted up and looking a million bucks, it was time to fire it up and see how she ran. “We kicked the engine over and heard an enormous clunking sound. It was pretty clear the engine was in need of a complete rebuild,” Ben says. John Desisto remembers it well: “We had it all in there and we had to pull it all out. Whatever we scratched, we had to repaint.” Luckily, Sam Fenech at Westend Performance took care of the rebuild in a matter of days and with the motor refitted, John fabricated a set of extractors and a two-inch exhaust that exits just behind the diff. The whole lot got the HPC treatment. 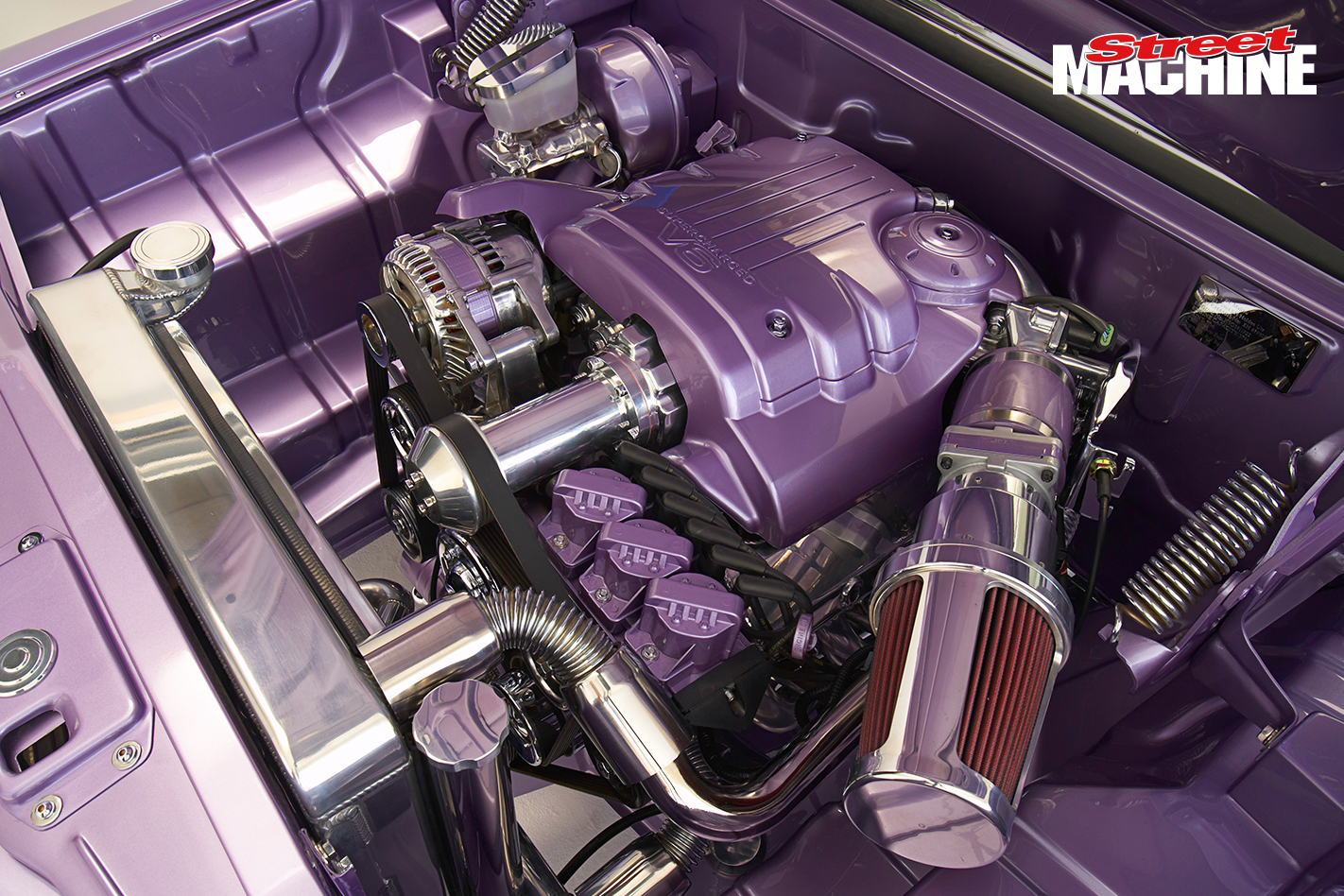 Steve at Alltrim has worked on his fair share of SM feature cars and he kept his standards up here. Everything has been swathed in oyster leather, including the rear cargo section. Inside, a pair or Rodeo seats with their headrests removed do a fine job of impersonating racy buckets but the highlight is the dashboard, in particular the finned gauge cluster. The oval cluster wasn’t ever going to fit in the stock EH dash, so the car was taken to Sefton Smash where Drago modified the top of the dash to suit. Filled with Auto Meter Golden Oldies gauges and framed by a polished Billet Specialties steering column and wheel, it lends a real hot rod flavour to the car.

Some might think it’s a girlie colour and that it’s missing a couple of cylinders but be honest — most of us wouldn’t kick it out of our shed.