The second part of our series on Aaron Bray's custom Holden obsession explores his FB Nomad.

This article was originally published in the Hot Rod 17 issue of Street Machine.

Like his FX, inspiration for Aaron’s FB Holden comes from the creative and idealistic American pioneers of yore; this time from the stylists and sketch artists officially employed by car companies, rather than the aftermarket customisers.

It’s no secret that smaller car companies like Holden didn’t have the financial inclination to let their designers run wild; in fact, nobody ran wild in 1950s Australia! Conversely, the same period in the ’States was the Golden Era of auto styling, with the 1954 GM Motorama show in New York City showcasing plenty of concepts, including the Corvette-based, two-door Nomad wagon. 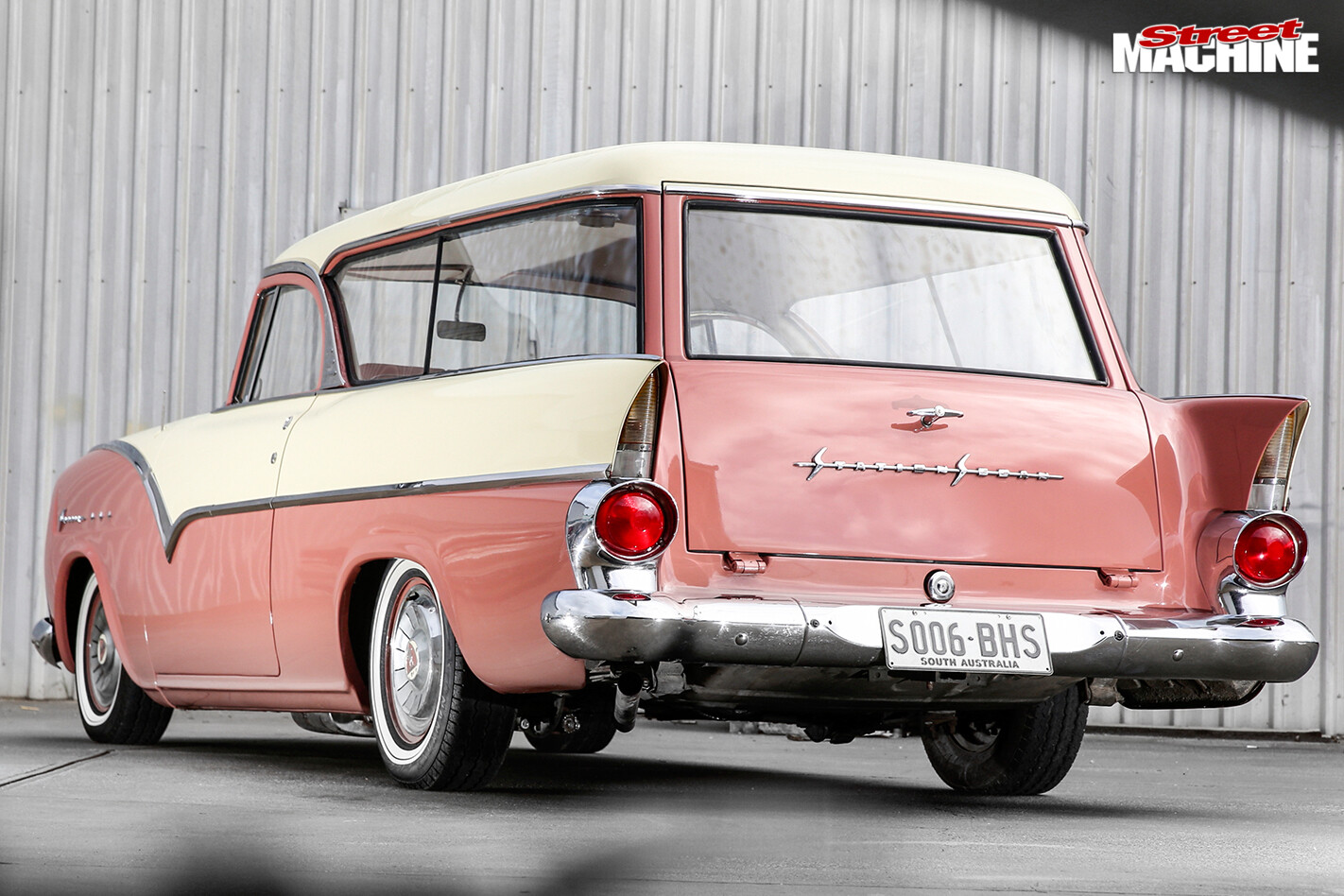 Built off a C1 Corvette platform, the Corvette Nomad was essentially a ‘shooting brake’ two-door wagon; a paradigm that GM Chief Designer Harley Earl then ordered be applied to the upcoming ’55 Chev range.

The two-door Bel Air Nomad wagon was introduced as the top of the range; pricier even than the Bel Air convertible. However big dollars on the showroom floor equated to poor sales; the Nomad lasted only for the ‘Tri-Five’ cycle and was discontinued at the end of the 1957 model year, creating an instant classic.

And it is this classy, up-spec, two-door Nomad concept that Aaron has applied to his FB Holden. He explains, “I see my FB Nomad as something Holden’s stylists would have liked to create before the accountants took hold. The designers always get in and conceive the most elaborate styles, but then the actual production car is what they have to compromise back to!” It’s no accident that Aden Jacobi’s broad penstrokes have influenced the FB as much as they have the FX; the boys have been mates for years. Aaron explains, “We were on the beers one night back in 2010 and Aden did this real rough pen drawing based on a pic that was getting around the ’net; a two-door FB with the C-pillar shifted forward; essentially an FB Nomad!”

Fast forward to Christmas 2013 and Aaron found himself with an FB in his shed for real. “Boxing Day, I started stripping it,” Aaron recalls. “Initially, it was supposed to be a resto.” We're glad the plan changed!

“I started by stretching the doors and B-pillars out by about 6.5 inches; the B-pillar was then cut and the C-pillar grafted on top, that way I was able to retain the factory brightwork unmodified,” he informs, making it sound as easy as that. The stretched front doors received the rear window frames, modified and extended to suit; all straightforward, until it came to getting the windows to wind up and down. “Because of the cut of the glass, I couldn’t use the factory scissor mechanism,” says Aaron, “So dare I say it, it uses a Hyundai piece,” he adds, sheepishly.

In fact, the upper and lower tailgates and the rear scuttle panel are the only body parts left unmodified; like Aaron’s FX, the FB Nomad is a case of – the more you look, the more you see.

Holden’s thick chrome bar above the grille and leading edge of the bonnet has been replaced by slimmer gear from a 1955 Ford Customline, while the grille itself has been sliced and peaked into a V-shape.

The factory bullet indicators have been pushed right out, set where the FB’s ‘cheeks’ were previously; it now has a lunging, concept-car-like stance accentuated by the eyebrows that Aaron extended to match the length of the 1955 Ford Victoria side mouldings. 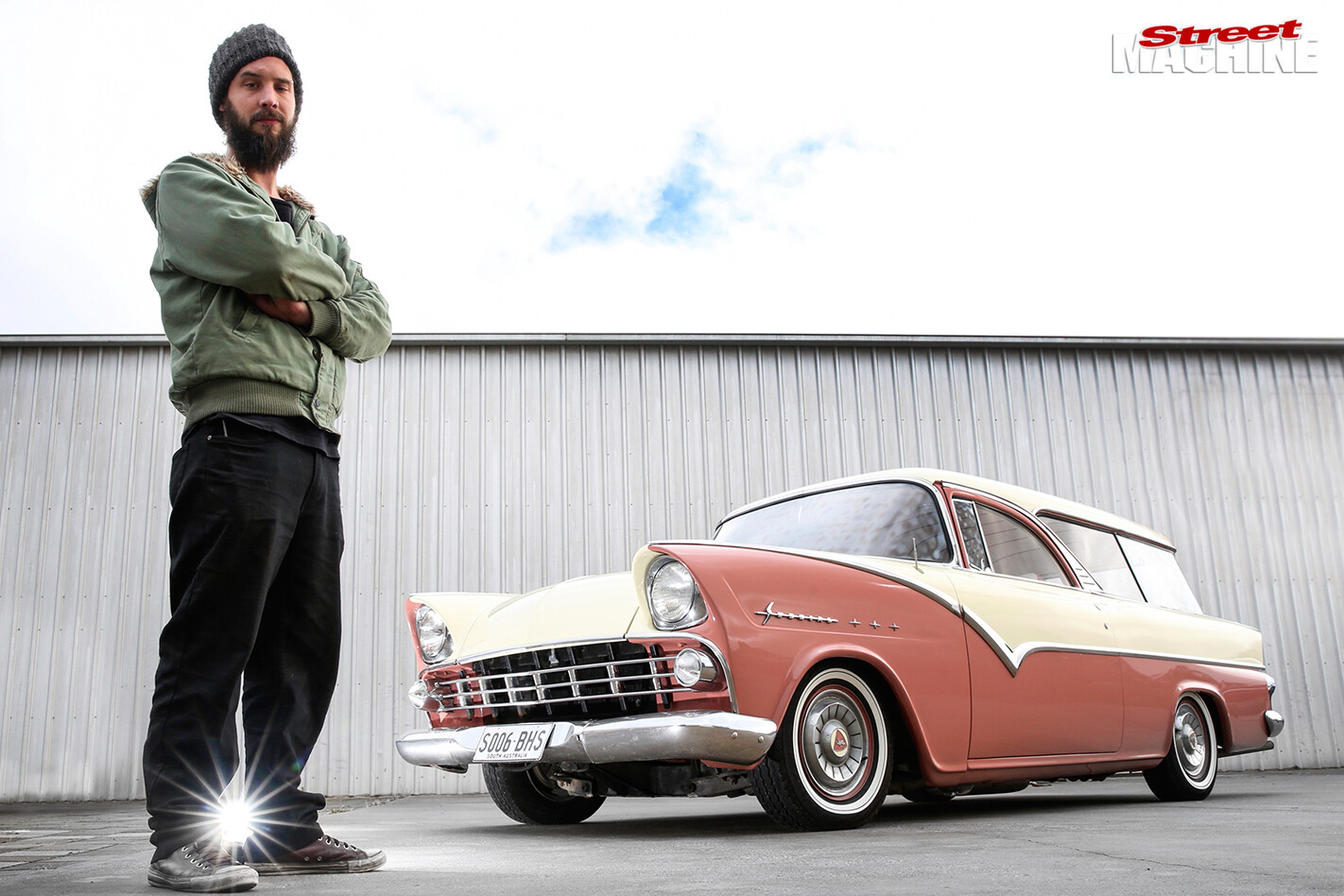 Amazingly, the Vicky trim didn’t take much to fit; a nip here and a tuck there. Along the doors, one trim slid into the other, essentially making it infinitely adjustable, while the trim on the rear quarters was cut short and folded over.

At the rear, the tail lights remain in the factory location; however the fins have been extended over them, much like those of the Nomad-ish 1956 Plymouth Plainsman concept by Ghia.

Finally, no Nomad would be complete without some ribbing to strengthen the rear cargo roof area. Again Aaron describes the process with disarming ease; “I cut the last two-thirds of the roof off and found my bead roller wasn’t deep enough for the job, so Shane and Carly Dale came over with theirs and we laid the lines in, then I just stuck it back on there.” “I wanted to build something that wouldn’t age, although I don’t like to use the word ‘traditional’; more ‘era-specific’. These were the sorts of things that guys were doing when these cars were ten years old and cheap,” Aaron explains. “Australian custom car history goes back a long way and there’s some fricken cool stuff; our Aussie shapes are pretty awesome and can have the American style applied to them successfully.”

And it’s in this warm, quiet shed, north of Adelaide, surrounded by three dogs and a log that young Aaron can prove his theory. I finish my beer, envious of his passion and his skills, but mostly his eye; an eye that can see not only through the decades, but across the blurry lines between factory and custom and most importantly, knowing what looks ’right’.