Road or race, Ken has a bike for every occasion

I BUILT the Norvin on my parents’ farm at Wolseley in South Australia,” says Ken, proud owner of this British classic. “Every weekend it was a 180-mile drive from my air force job in Adelaide, work feverishly both days then drive home again. I’m sure Mum and Dad thought I was nuts. Little did they know I would still be riding the bike 36 years later, still riding cross-country to Wolseley and Bordertown.” 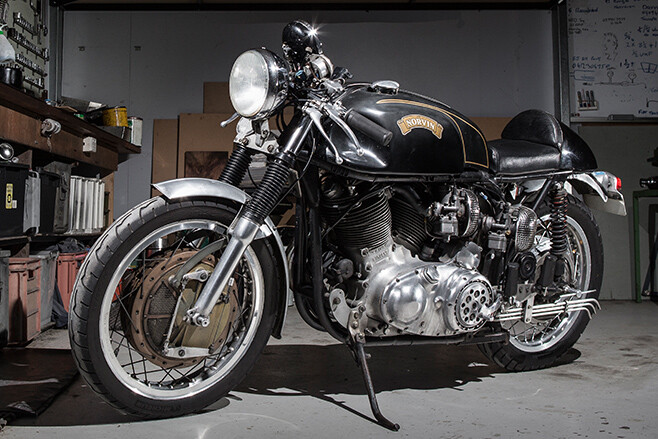 It takes commitment to own any Vincent, at one time the world’s fastest production motorcycle. They’ve always been rare and expensive, and of those that made it to Australia, many ended up powering road-racing and speedway sidecar outfits, classes the lusty OHV V-twin engine dominated for decades. Which is where Ken, then a young aircraft fitter-machinist and welder, got his start. 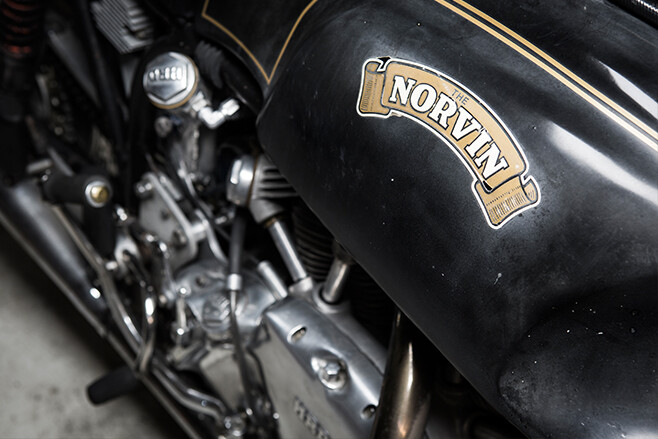 “It was in pieces,” he says. “It didn’t exist. I started with a rough speedway engine, and realised it was too big a job to build an original Vincent from the parts I had. I initially thought of putting it in a Triumph frame, then I read a couple of magazine articles on Norvins, in particular one on Eric Debenham and another in Cycle World. “I figured it would be the easier option over building an original. Ha! Little did I know it was probably more difficult and would maybe take longer.” The Norvin gets the other half of its name from its Norton ‘featherbed’ frame, introduced in 1950 for the works Norton GP bikes and later extended to production models. For many years, it was regarded as the world’s best-handling chassis, spawning a raft of specials including the Triumph 650-powered Triton. But fitting a 1000cc V-twin where once lived a 500cc single wasn’t easy. 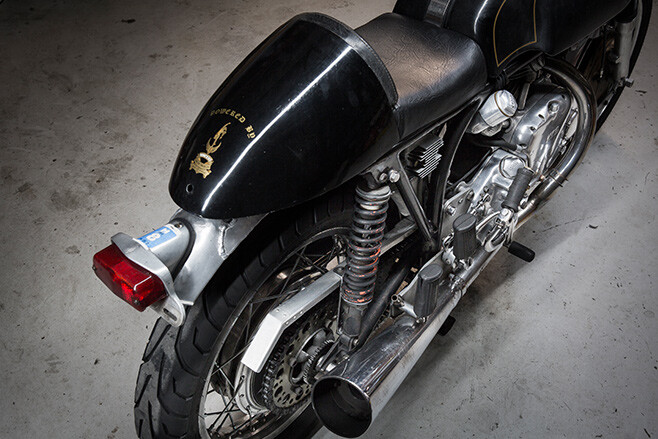 “When you build a special like this, there are lots of issues,” Ken says. “Squeezing a big engine into a frame not made for it is [pauses] challenging. It isn’t simple or easy and it takes years, but they are a great bike when it’s all finished.” Crucial skills are patience and the ability to manufacture a lot of the parts yourself, much like building a hot rod. Ken acknowledges the help he got from his air force colleagues, answering his questions and showing him ways to do things. The initial build took two-and-a-half years and cost around $3500, or about double the cost of a new Honda Four. He got it on the road in 1978 but it would be another 25 years before he was happy with it.

6
Squeezing a 1000cc Vincent V-twin into a Norton featherbed frame is akin to fitting a big-block Chev in an LC Torana, except Ken has done it here without modifying the rails!

“Others thought it was great but it took many incarnations to get it to my liking. Three front wheels, three rear wheels, three tanks and five seats. I haven’t done anything major for eight or nine years now.”

6
The result is the world's most coveted cafe racer, combining Britain's strongest engine with its best-ever chassis. Ken scratch-built the whole thing from an ex-speedway engine in the late 70s

As befitting a cafe racer, equal attention has been given to the engine, handling and looks. The 1951 Vincent Rapide engine has been upgraded to Black Lightning specifications to make around 65hp, or 20 more than stock. The magneto ignition has been retained, although the carbies were upgraded to twin 36mm Dell’Orto pumpers on Ken’s own manifolds and the clutch more recently replaced with a multi-plate unit from a GS Suzuki. Stock-shaped headers in a larger 15/8-inch diameter dump into an owner- built megaphone. 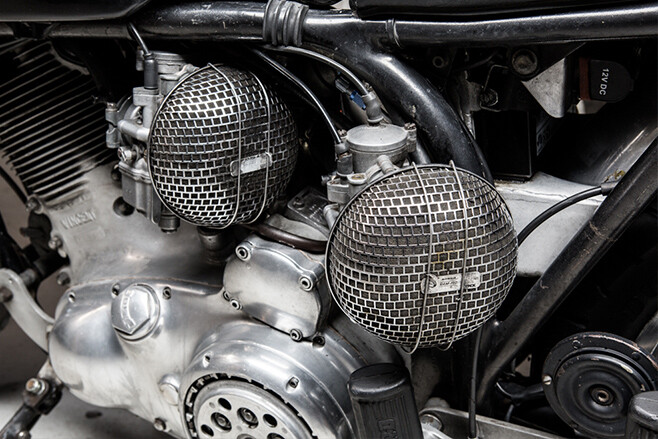 The 1956 Norton wideline featherbed chassis is stock. “People say you have to cut the frame to get a Vincent engine in, but no, you don’t,” Ken says. Norton Roadholder forks run Commando springs. A number of different front brakes were tried — including a four-leading-shoe drum off an early TZ Yamaha — before Ken sourced a prized magnesium 250mm 4LS Fontana drum that he laced to an 18-inch WM2 Borrani rim. Down back, Koni shocks are mounted on the stock Norton swingarm, with a 200mm twin-leading- shoe Laverda drum laced to an 18in alloy rim. 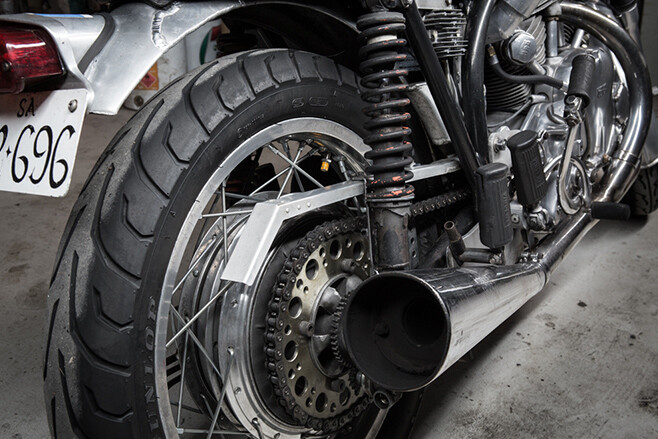 “The big Fontana drum is all that is said about it,” he says. “It has powerful progressive braking that can be squeezed down to a howl on dry bitumen.” After first trialling Dominator and Dresda tanks, Ken finally settled on a five-gallon Manx Norton tank sourced from England. The oil tank and tail section are his own manufacture. “I had never worked aluminium like this before but the blokes in the sheet-metal workers’ hangar gave me some tips.”

6
V-twins are to motorcycles what V8s are to cars. While Ken's bikes are built to different themes, they all beat to the same heart

Although built as a road bike, the Norvin has seen its share of track time. “In 1980 I was posted to Richmond in NSW and went out to the classic races at Amaroo Park where I met Eric Debenham. He convinced me to have a go and I ended up running in Division 1 on the same bike I rode to work during the week. So I built another Norvin which I still have, a copy of Debo’s, just for racing. The road bike is used very regularly for commuting, touring, pleasure riding, rallies and picking up pizzas and groceries. I see a lot more riding to come yet.”

The other bike in the photos is Ken’s custom 1948 Vincent HRD Rapide. “I’d had the idea of building a Black Lightning replica for the road since I built the Norvin,” he says. “Now there is a name for this style — a bobber. I remember seeing bobbers in early Easyriders magazines in the 70s.

6
The stripped-down Rapide sports 21in front and 18 rear rims for a killer stance and a wider range of available tyres. Like the Norvin, the HRD is in regular use, averaging around 8000 miles a year

“This bike came up in early 2011. I’d been asked to assist in the repair of a crashed Vincent. Then I was asked to do the job but the owner decided to sell the bike instead. It was one of those ‘can’t afford it but I have to afford it’ moments. It was available, which for a Vincent is usually the deciding factor [in buying one]. “The exhaust system had been completely torn off so exhaust stubs and a pair of two-inch straight-through pipes were fabricated and fitted. The seat was ripped open so I made a low-profile short seat to replace it. The headlight was squashed and I replaced it with a very small one from a swap meet; going from the matte-olive drab paint on the inside it was probably ex-military. 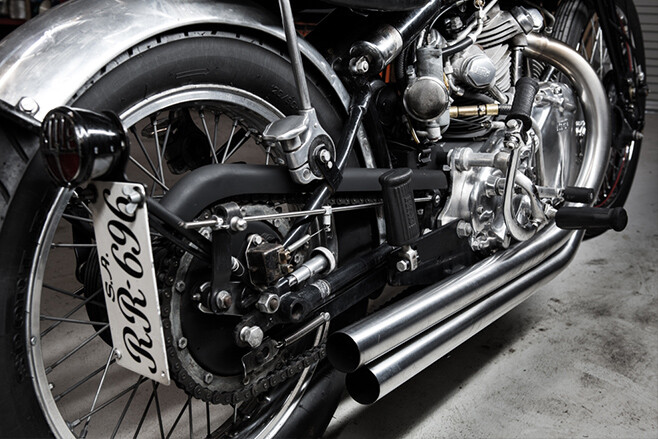 “The front guard was all scrunched up and removed entirely, and the 20-inch front rim was buckled, so I laced up a 21-inch rim in its place as tyres are more readily available. The original rear guard was badly cracked and replaced with a spare half-guard I had, and the 19-inch rear wheel was taken out and an 18-inch rim I’d originally built for the Norvin put in its place. It allows a fatter profile and a wider choice of tyres.” 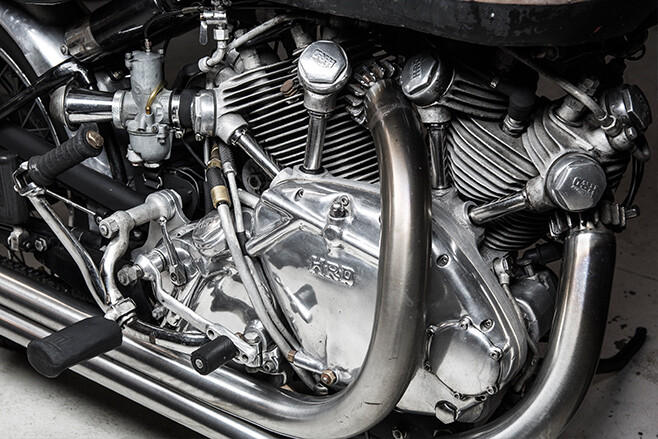 The bike had been fitted with Girdraulic forks from a Series C model, and Ken couldn’t resist the urge to retrofit a new set of the original Series B Brampton girder forks when they were offered to him. “It was another ‘can’t afford it, but’ moment,” he says.

“The old patina’d fuel tank is another part I bought years ago at a swap meet and had sitting on the shelf. I put it on to get me around while the original tank was being painted but I’ve had so many favourable comments about how good it looks that it may just stay on.” The engine and transmission are stock apart from higher compression, 30mm Amal Mk1.5 Concentric carburettors and a modern alternator and battery replacing the cumbersome originals, although it still runs Lucas magneto ignition. It makes around 50hp. The original stripped Black Lightning race bike weighed in at just 170kg and Ken’s bobber wouldn’t be far from that, so performance is brisk. As for the frame, well, there isn’t any, apart from the oil tank (hidden by the fuel tank) which doubles as an upper frame member, to which the steering head and rear monoshock are attached. The swingarm itself is a triangulated cantilever which pivots off the engine cases, and the whole set-up is not a million miles from a modern Ducati. The advantage is the same: a small bike relative to its engine capacity. Ken built the bike in six months and in three years has covered some 24,000 miles, no mean feat given the Norvin is also in regular use, along with a 1951 500cc Vincent Comet, 1949 Ariel Square Four and 1972 Bonneville. “The bobber is a totally different style and ride compared to the Norvin,” he says.

He’s already collecting parts to put another Rapide engine in another frame, his broad aim being something in between the two featured here. 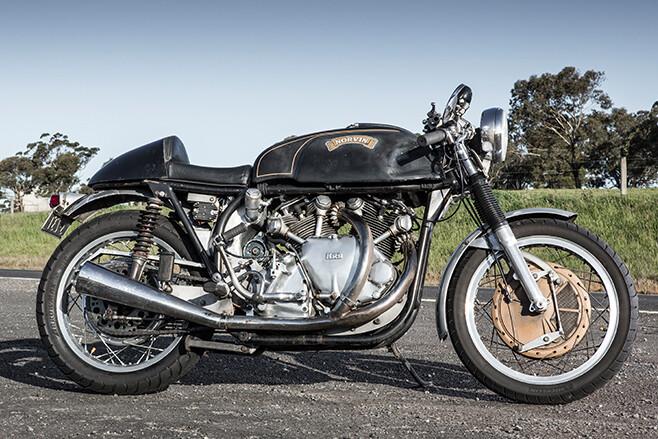 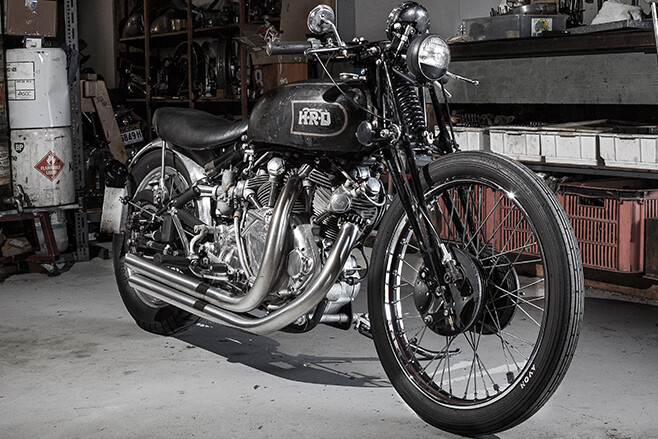