Long-time Street Machine readers may remember this bitchin’ XB from our July/August 1998 issue.

Owned and built by James and Kellie Grima from Sydney, the car hasn’t changed radically since that time, but has evolved into something even tougher and neater than before. It’s a perfect example of how many people are choosing to rework traditional horn cars for the 21st century.

Tastefully modified muscle is the theme. Freshen up the factory warpaint, including the original decals and badging, leave the bodywork and interior alone. Where the street machining starts and the restoring ends is in the mechanicals. Give the car some almighty grunt, dial in a wicked stance and fit some tough rims ’n’ rubber. Too easy! The Grimas were ahead of their time, with the project beginning some 15 years ago on a genuine XB GT. Early on in the piece that car was deemed too rusty to be worth persevering with, so James transferred the GT bits onto a healthy non-GT XB shell. He could have swapped the tags too but chose not to.

“It would never be a real GT body so why pretend?” he says.

The build plan called for both show and go, which they’ve achieved in spades. The XB has made it into the Summernats Elite Hall for five years running and has picked up no fewer than 50 trophies at various shows around the countryside. It’s easy to see why. Check out the flawless panel work, covered in gloss black – the toughest test for any surface. Underneath is nearly as good, having copped a full detail before Summernats 16. With the engine and driveline out, James spent months of spare time removing crud, smoothing the rough edges then painting the lot.

The interior is a homage to GT heritage, with the Grimas fitting original-style houndstooth trim. A six-point alloy cage is a nod to Group C glory days, with a serious Alpine audio system the only indication that this is a 21st-century machine.

On the grunt side, the XB was no slouch before, with some 420hp at the crankshaft, but this time around things are even hotter. How about 502hp on premium unleaded? Of course, that’s without the assistance of the car’s 300hp nitrous kit. 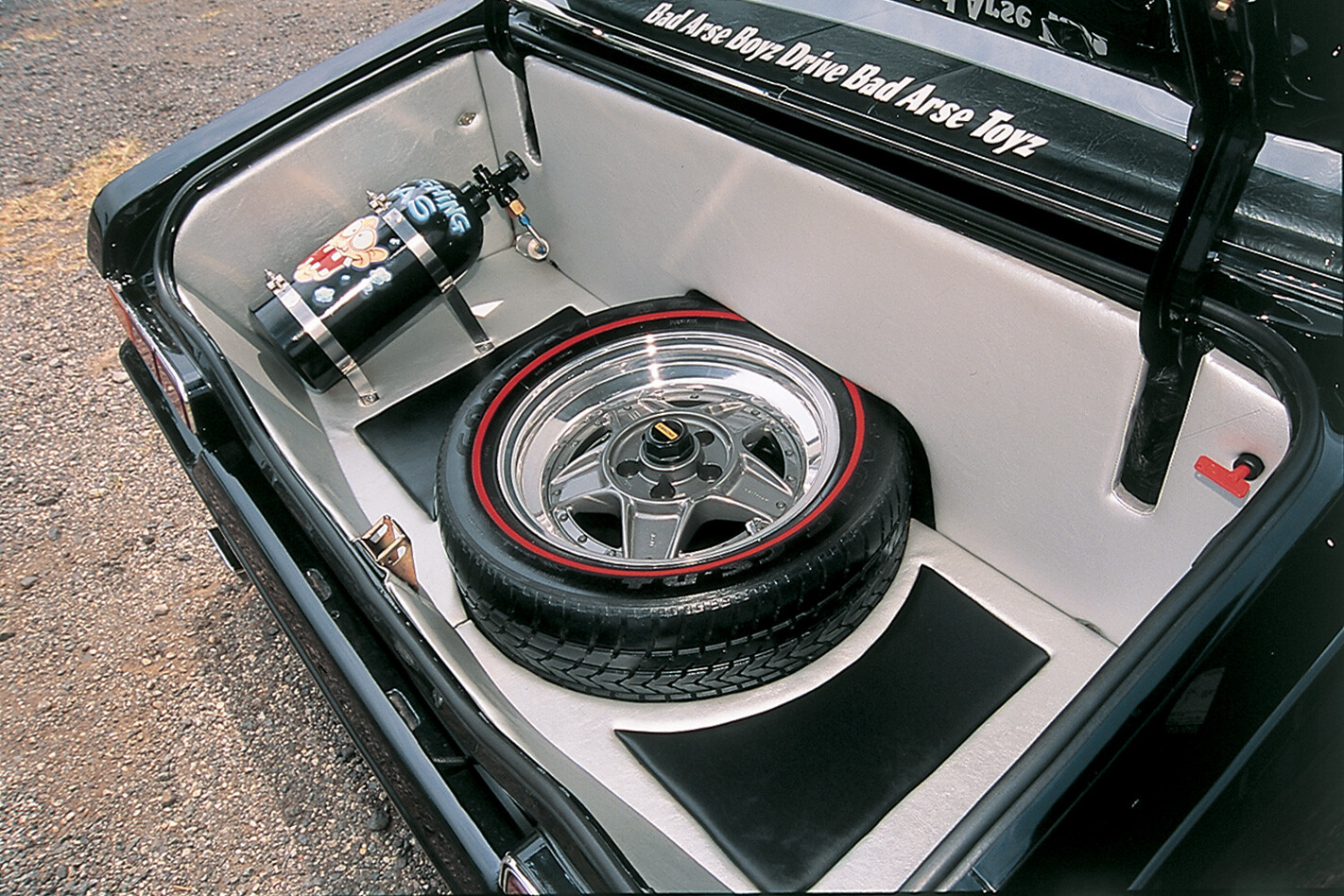 Being a motor mechanic by trade, James screwed the motor together himself, with the machining chores being handled by Joe Polito of Pro Stock fame. Building a street motor was always the Grimas’ number one priority.

“It had to run on pump fuel, otherwise you end up not driving the car,” James says. “Besides which, the RTA is coming down hard on using race fuel on the street.” With this in mind, compression was limited to 10.5:1. The key players in the Clevo’s power production are a 830cfm Barry Grant Race Demon carby and an SVO inlet manifold. The SVO’s long runners help endow the Clevo with its prodigious top-end grunt, but as they were designed to fit aluminium heads, they came at a cost.

“I had to modify the 2V heads to suit the SVO manifold, which was not easy, but worth it.” A healthy Barry Grant fuel system keeps the engine supplied with all the Optimax it can slurp down, while the fires are lit by an MSD 6AL ignition. The cam is something of a weapon, with more than 600 thou lift giving the XB one hell of a rorty idle.

Waste gases are dispensed with via a set of four-into-one extractors, dumping into a James-built 2½-inch exhaust system.

“We went for a V8 Supercar-style X-pipe design for the exhaust system, which not only keeps the car quieter but showed an extra 15hp on the dyno.”

The grunt is fed into the traditional Top Loader four-speed and nine-inch combination, but with a few twists.

“Since the new motor went in, the extra power made it even harder for the gearbox to shift quickly,” James says. “So I replaced the standard shifter with a Hurst Indy unit and, mate, it’s the best thing since sliced bread!”

Another key to building a happy Street Machine is to get a suitable clutch. Western Clutch Service built the Grimas an 11-inch ceramic clutch with a beefed-up pressure plate and it has stood up to plenty of punishment. The nine-inch has copped a birthday too, with 31-spline Mosier axles and 4.1:1 Richmond gears. James says the XB is a finished project for now, though fitting a supercharger is a tempting concept. Anyway, they’re busy raising a new generation of power hounds. James junior is just seven, but is already a confirmed revhead, and even 19-month-old Justin makes car noises whenever motor racing comes on TV! Wonder if the boys will be giving a BA the treatment in 2023?