Dez Knight takes us through a day in the life of a legend.

Dez Knight, proprietor of Knight’s Garage in Orange, NSW, has come a long way in such a short time – he’s not even 36! The first super-elite machine he worked on was good mate Mick Fabar’s 1933 Ford, RAWR. After they decided to fine-tune the already-stunning ride, the cutting-edge hot rod came back better than ever in 2011 to take out the prestigious MotorEx Best of Breed Hot Rod award.

Not content to rest on his laurels, Dez then went on to be involved in back-to-back Street Machine Of The Year winners, back-to-back Summernats Grand Champions, as well as three ’Nats People’s Choice winners – including the latest stunner to roll out of his workshop, Grant Connor’s Bad Apple. The badarse XR Falcon took Summernats 29 by storm, winning 3rd Top Interior and Top Super Street in addition to People’s Choice. 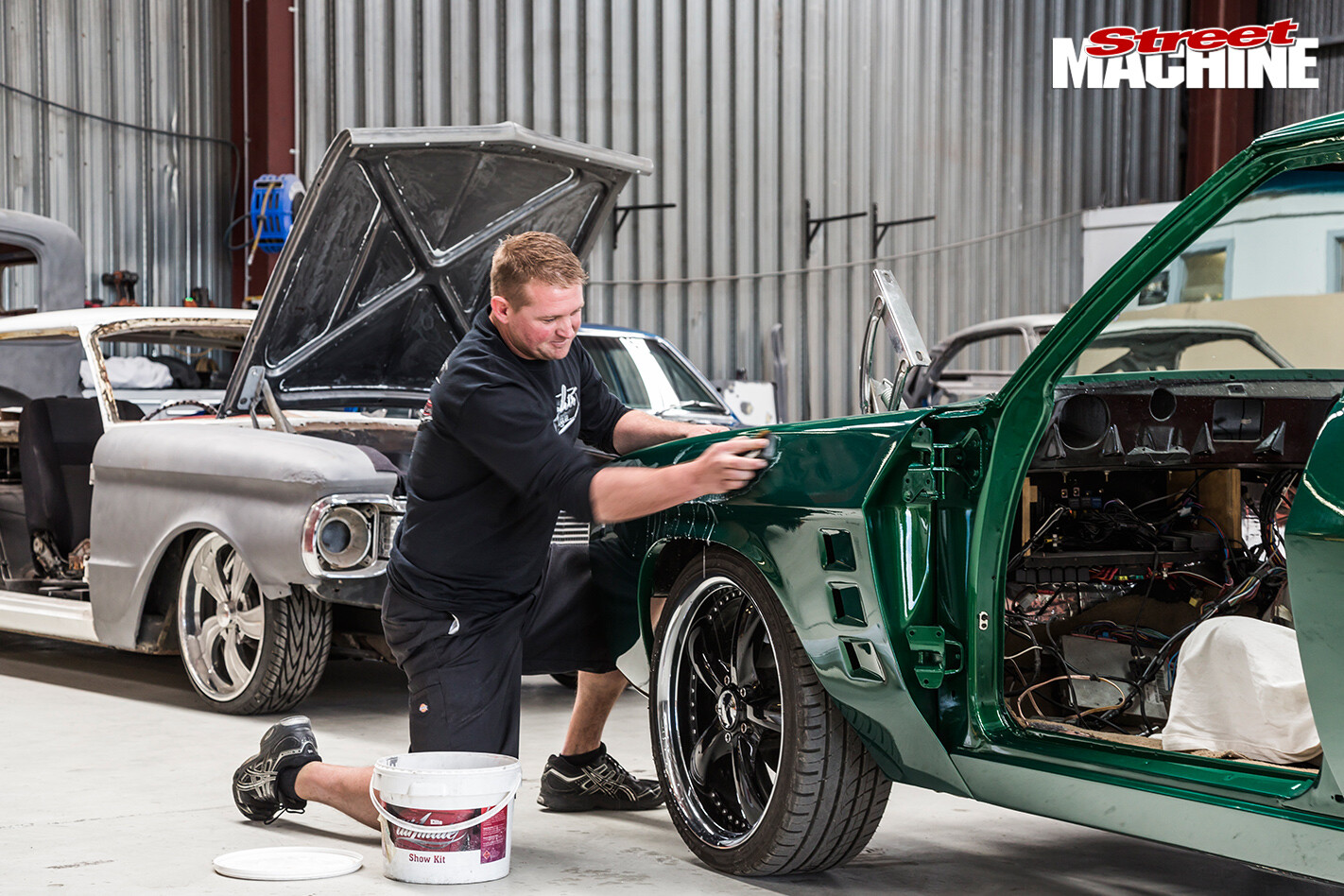 That is an impressive resume! How have you done it?

Hard work and a great team. I couldn’t do what I do without the guys I have working alongside me. They’re all just as passionate as me and are all bloody good at what they do. It was actually them who encouraged me to open the shop in the first place. In five-and-a-half years we’ve gone from nothing to being on the biggest stage. I’ve been good mates with some of them for 10 years and they share the same vison.

What is that vision?

To build really high-end cars and to make the build a pleasurable experience for the customer. You hear so many horror stories about people getting ripped off, having to pay for something three times to get what they want or get it done right. I like to think our clientele come in as customers but leave as good friends.

10
This XP coupe is a good example of how far you can go when you engineer a car right and make it safe and registrable. 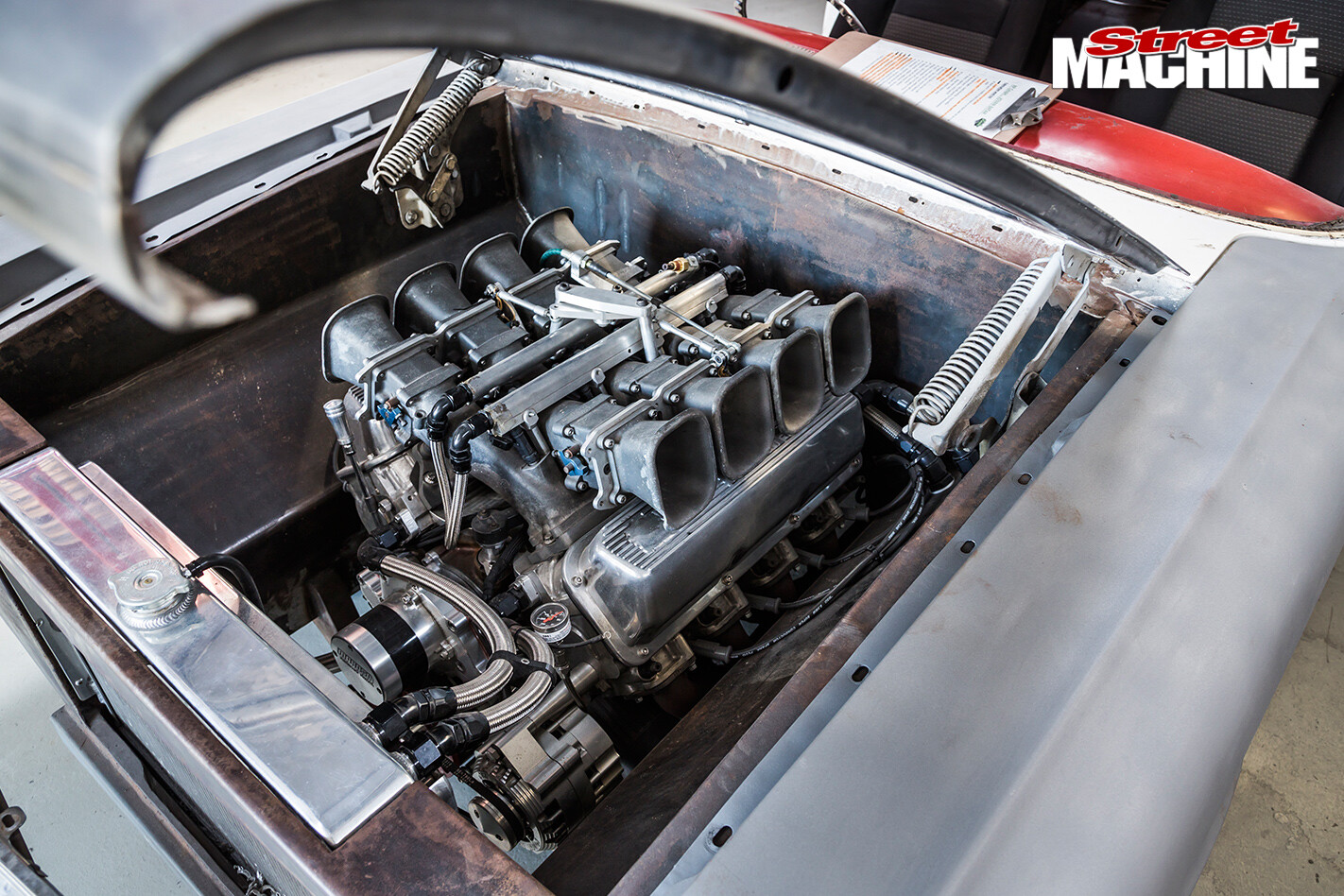 The ProFlo-built 369 Windsor features V8 Supercar cross-ram injection and has been dynoed at 600 horses at the wheels. It’s another Street Elite build, but will be a driver, complete with full leather interior

After finishing my apprenticeship at a local shop, I worked in the mining, engineering and drilling industry, which taught me a lot about project planning and managing people. With a good plan, a realistic budget and a realistic time-frame, a good team can deliver a great car. Mining was also 14 days on, seven off, which gave me a good block of time to work on projects for myself and my mates. I also spent plenty of time on planes, researching and reading up on what’s important – always with a Street Machine in hand.

10
The mini-truck is one of the first cars that Laurie Starling worked on, back when he was at Easy Street Customs. Knight’s has tricked up the airbags and dropped an LS into it

How do you keep track of all these big projects?

Planning. These cars have to be planned and mapped out from the start. We have regular toolbox meetings, so we all know what’s going on. There’s run sheets on each car to tell us where we want to be each week, each month – this stops the budget and build time blowing out. You have to be very methodical about how you spend a customer’s money. Most have been thinking about their dream car for a long, long time. They’ve worked hard and saved hard for the money and it’s your responsibility to take their dream and turn it into a reality. If you say you can do it, then bloody do it! 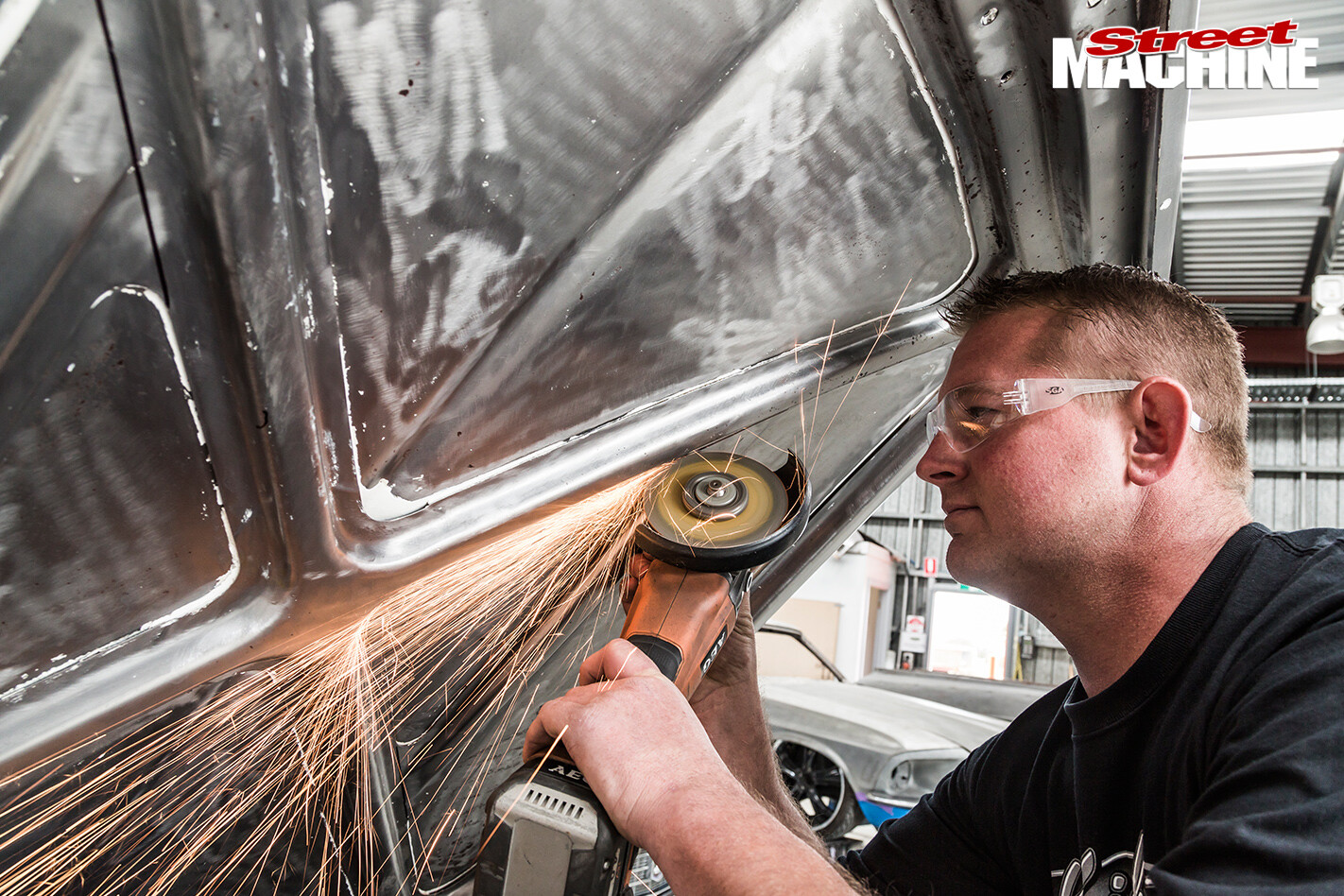 No high-end work prior to RAWR?

None. I’d done stuff for mates and myself, but no show cars.

So how in the heck did you convince Mick to let you at RAWR?

I had the vision and the confidence in what I could achieve. As a kid, I went to shows and took a million pictures. At Summernats I’d watch the judges to figure out why one car won and another didn’t. After watching RAWR get judged at Summernats, Mick and I got together and workshopped a few ideas that I had. After Mick gave me the green light, I was like, ‘Shit!’ – I actually had to do it. This was all before I had actually started the shop.

10
With a twin-turbo Windsor, fat rear hides and United Speed Shop front end, this XW ute is destined to be an absolute street terror

Knight’s Garage built Mick’s next car, ZERO’D (2013 SMOTY winner), from scratch – how did you bring that together?

Not only was I in charge from start to finish, I was also starting the new business. I approached a few mates who worked at other local shops and asked if they wanted to get involved, come over at night to tinker – they were all keen and encouraged me to do it. When ZERO’D came to us, it had already been started, it had some basic floor and chassis work but still needed a ton of work in a really short time. To get ZERO’D done we whiteboarded and planned everything from A to Z before even commencing the build. It was a big effort; we got the car in August 2011 and unveiled it at MotorEx, July 2012. It really bought the team together.

Danny Makdessi from Custom Bodyworks was under the pump on Terry’s Charger. He’d seen the bodywork that I’d done on ZERO’D and approached me to help him out. Given the cars Danny’s done, the paintwork he’s done, I thought it was a privilege, so I jumped on board. While working on the Charger, the FB showed up, so I assisted on both cars from bodywork right through to assembly and unveiling at MotorEx. I greatly enjoyed working with Danny and his team at Custom Bodyworks. 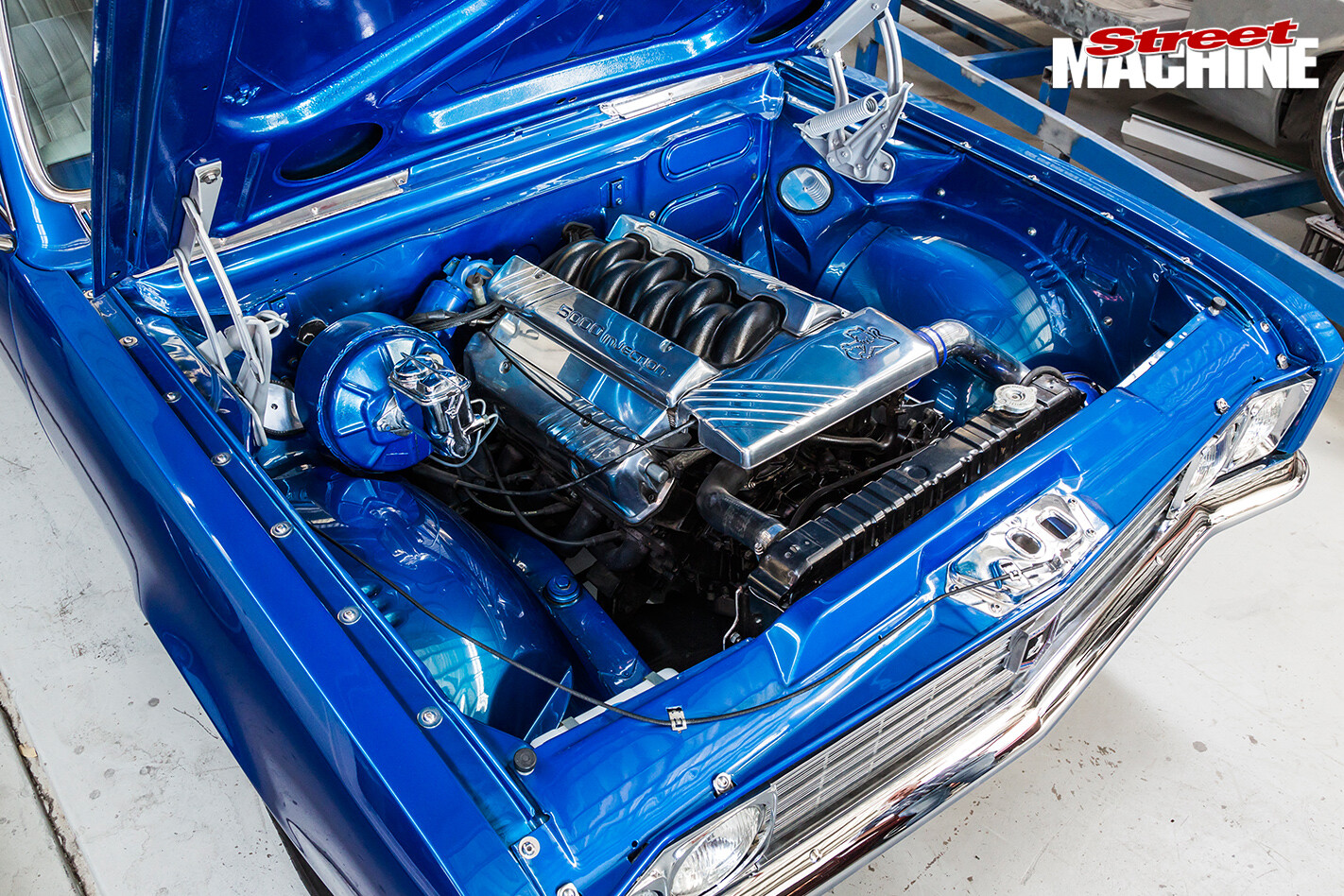 I’m definitely a car guy through and through, but I’ve also played first-grade rugby league for Orange CYMS Football Club for 15 years. In ’96, I was picked for the Western Country Division Australian Schoolboys, which toured France and Europe. These days I coach and mentor local junior players and still pull the boots on myself.

Is your family into cars?

Definitely. I have a one-year-old son, Jaxon, who has a schmick pedal car. He already knows what a microfibre towel is and is already learning how to clean it.

10
The HT Premier is a build that Dez has just wrapped up for his step-dad, complete with injected 355 stroker, Turbo 700 and 9in. Dez describes it as “the ultimate street cruiser”

You know what, people ask me that all the time but honestly I don’t know. Mind you, I would like a ’57 Buick two-door; they’ve got so much style to work with. Grant Connor wants to build one as well; I’ll probably end up giving all my ideas to him. But that’s okay, ’cause he’s a great client and mate.

What’s next for Knight’s Garage?

All of the guys working for me have been with me full time since the debut of ZERO’D. Like me, they’re into cars that can be driven. ZERO’D is going to Summernats 30, it’s in for a few custom mods for that, as well as to allow Mick to get it out and enjoy it. Most of our builds are Street Elite projects, plus things like a stretched ’29 Dodge hot rod limousine, and an XR Falcon resto – I’m loving this project, it’s the first car this client ever owned and he wants it to be the last car he will own. It will be all stock with a few mods, but it takes just as much work to get it right. However it’s completely different to the usual stuff we do. Sensible and useable – that’s us.

10
Mick Fabar’s RAWR ’33 Ford debuted in 2010, Dez convinced Mick to give him a go at fine-tuning the car. It came back to win MotorEx Best of Breed Hot Rod in 2011 and Best Display – the first display Dez had ever built. 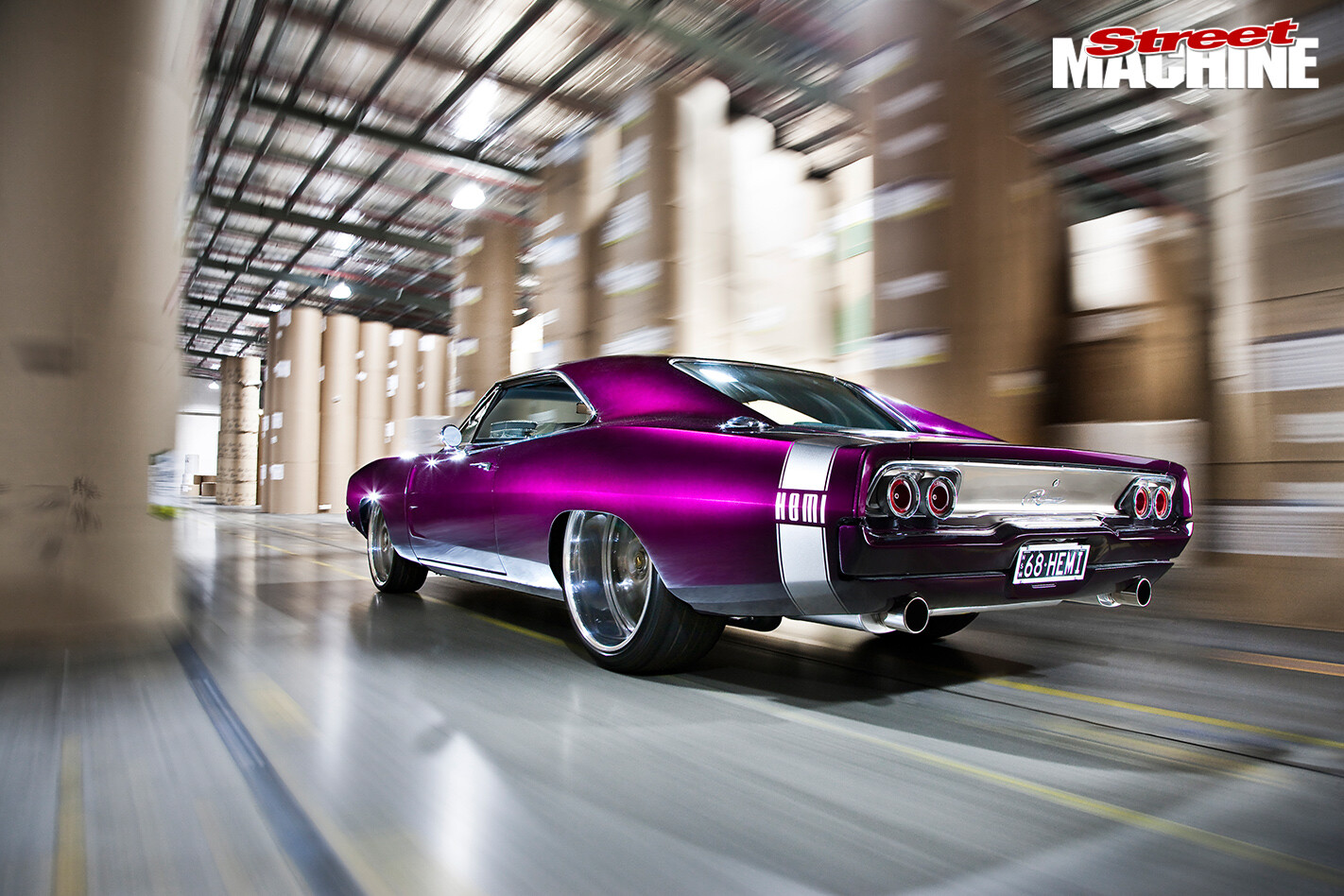 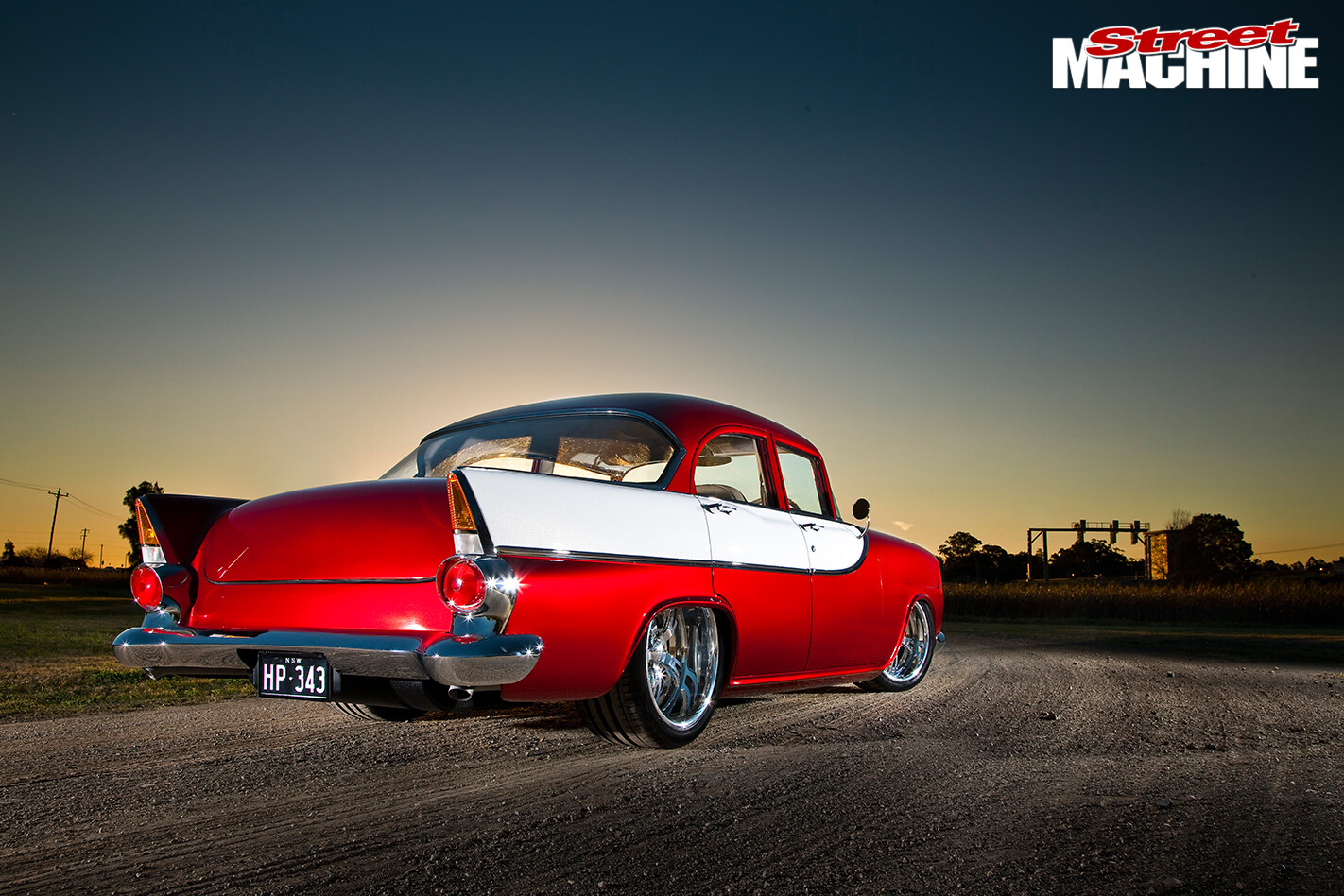 Henry Parry’s FB Holden was a great team effort, including the Chop Shop, Custom Bodyworks and Knight’s Garage, who again took care of the body work. ##text link to story

10
Grant Conner’s Bad Apple XR Falcon was a budget-build by comparison to some of the cars that have come through Dez’s shed, but it turned out amazingly and took out People’s Choice at Summernats 29 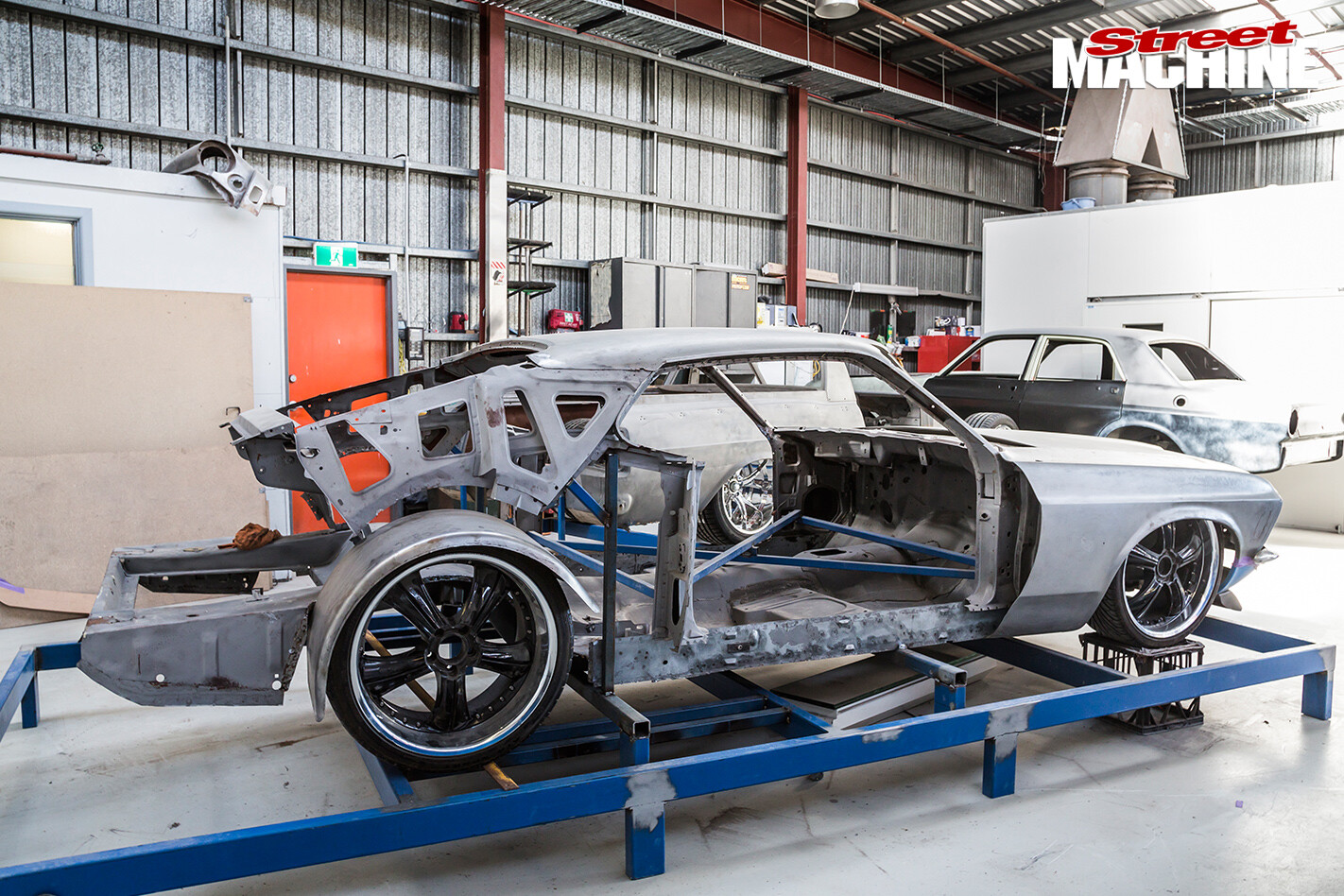 The owner of this ’69 ’Stang is a local from Orange and wants the Mustang to be a Street Elite build. Highlights include EFI Windsor, United Speed Shop front end, coil-overs all ’round along and some pretty wicked electronic touch-controls 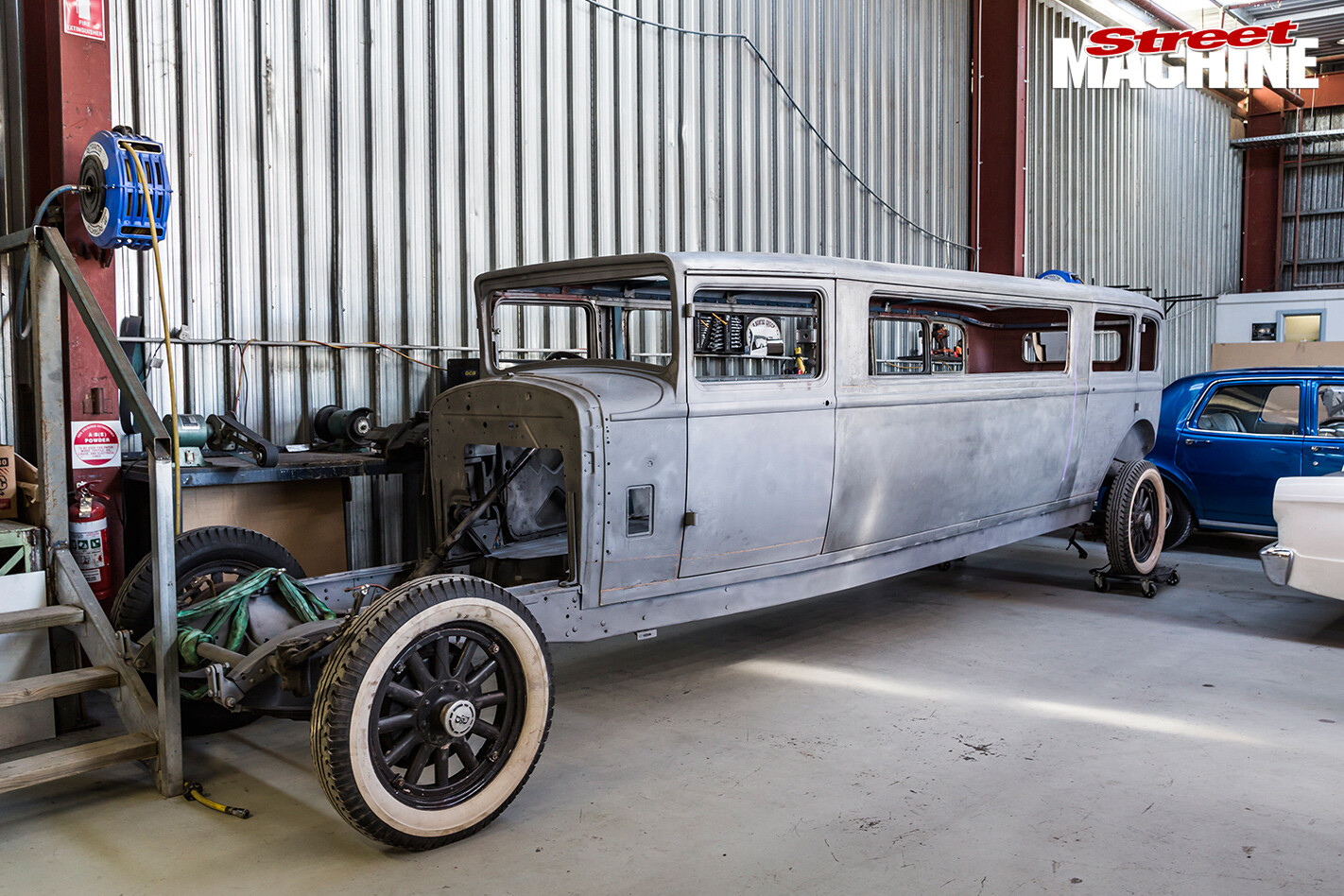 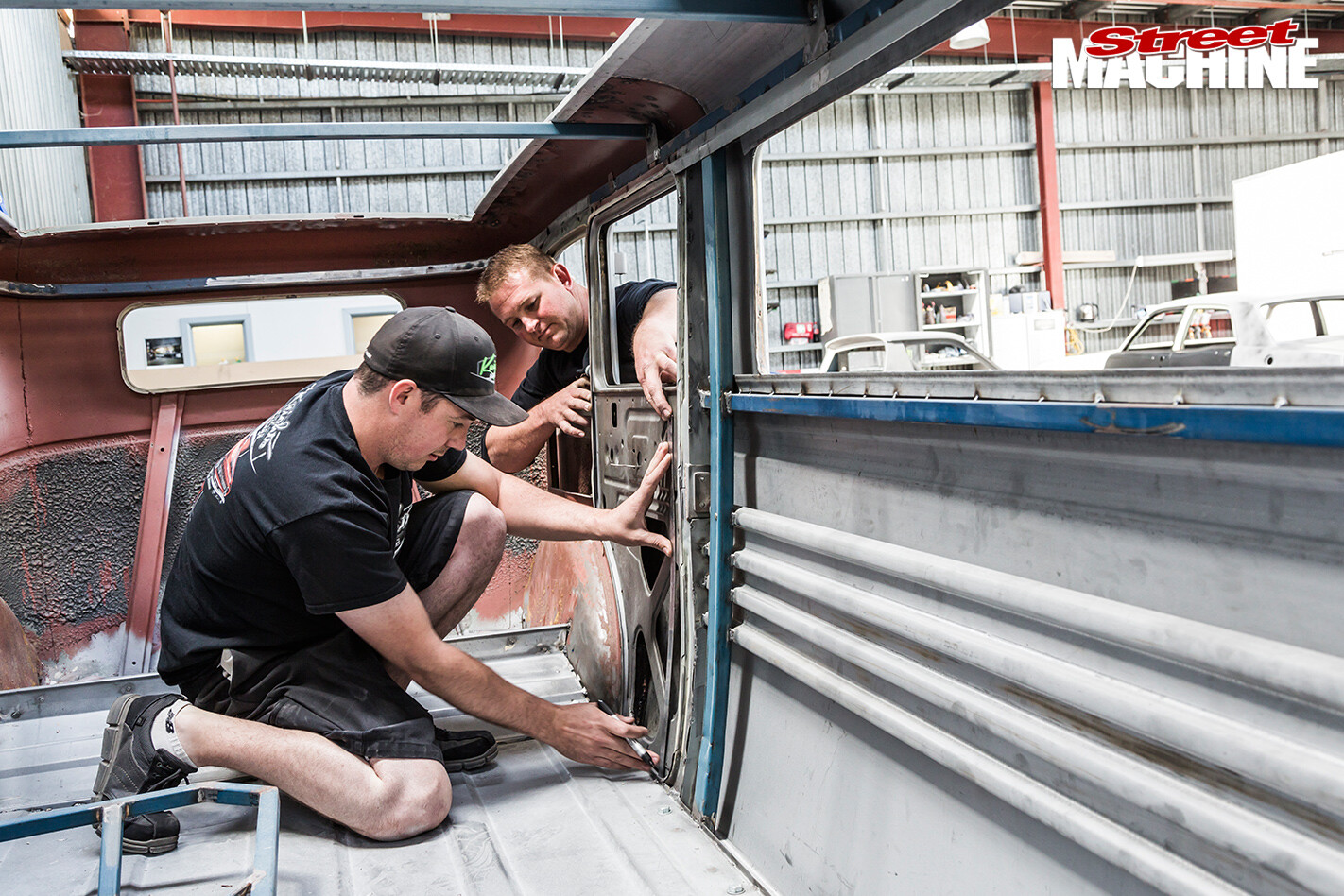 This stretched 1929 Dodge is a purpose-built limousine. It will be part of the working fleet for a Gosford-based company 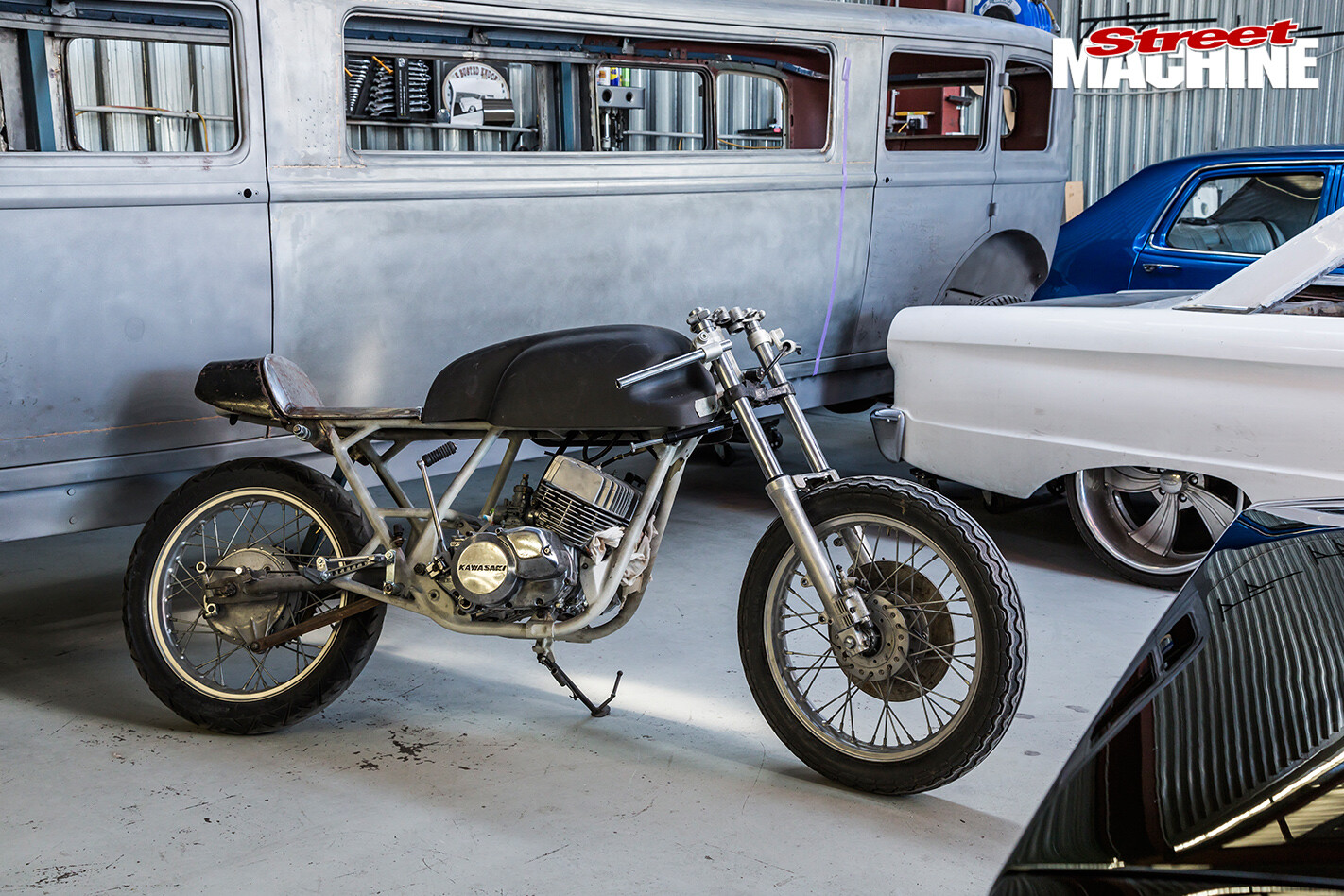