MOST of us are familiar with the concept of fuel injection systems and the Engine Control Units (ECUs) that run them. But Haltech’s new NEXUS R5 really stands out from other ECUs, as it is designed to manage so much more than just the engine. That’s why Haltech is calling it a VCU – Vehicle Control Unit.

The box plays host to not only an ECU but also another three-letter acronym: a PDM, or Power Distribution Module. What’s that, you ask? Well, first let’s talk about wiring.

The most conventional way to wire up a car is to use a fuse-and-relay system, where the wiring loom connects any high-current-draw devices (thermo fans, electric pumps and the like) to the battery, first through a relay and then through a fuse. This is usually the cheapest way to get your engine running, but it can also be the most complex, as the ECU needs to send a low-current signal via the wiring harness to a relay, which can be thought of as an electronically controlled switch. The relay then provides the high-current power supply to the device via another set of wires. So with just a few basic devices, plus injectors, ignition and the ECU itself all connected to battery power (and then also connected to the input switch that’s used to turn the devices on or off), you can very easily end up with a large and daunting wiring loom. When all of these wires are also fused for short-circuit protection, you have even more connections and complexity thrown into the mix.

MORESetting up the Haltech ECU in Arby's POR440 valiant

Sean Muscat’s twin-turbo Cortina has continued to go from strength to strength on track since switching to a NEXUS R5, setting multiple PBs, with a current best of 4.43@167mph over the eighth-mile on 275 radials

But there is another way – enter the PDM! A Power Distribution Module provides the high-current switched power directly to the devices in the vehicle, essentially replacing your conventional relays, fuses and circuit breakers in one fell swoop. PDMs are generally more reliable than a fuse-plus-relay combination, and they’re controlled by digital electronics, so if a fault causes a short or open circuit, rather than just blowing a fuse, the PDM will reset, shut off or send a warning to the driver. Because the PDM supplies power directly to high-current devices, there are fewer wires, wiring connections and therefore potential points of failure. This makes wiring simpler and also offers a fairly substantial weight saving.

Sounds great, right? So why do we rarely see PDMs used in street applications? Well, while they may simplify the wiring, they aren’t always simple to set up. They still need to receive instructions from the ECU, keypad or other input device, either directly from wired inputs or over a CAN bus. And because the PDM is a separate unit to the ECU, that usually means a separate PDM software package must be learned before you can set it all up and make it talk with the ECU. This process can involve writing CAN protocols and coding in programming languages like C++. For most of us mere mortals, that’s well outside our skill set, so more often than not requires paying someone switched on enough to complete the work. When you add that onto the cost of the PDM unit itself, it’s easy to see why they have largely stayed within the realm of the high-end circuit race car.

This is where the NEXUS R5 changes things up. Because everything is integrated in one unit that receives power and ground directly from the battery, all of your devices can be powered and switched from that same unit. You no longer need to run separate wires to a fuse box or relays, or even to a PDM. 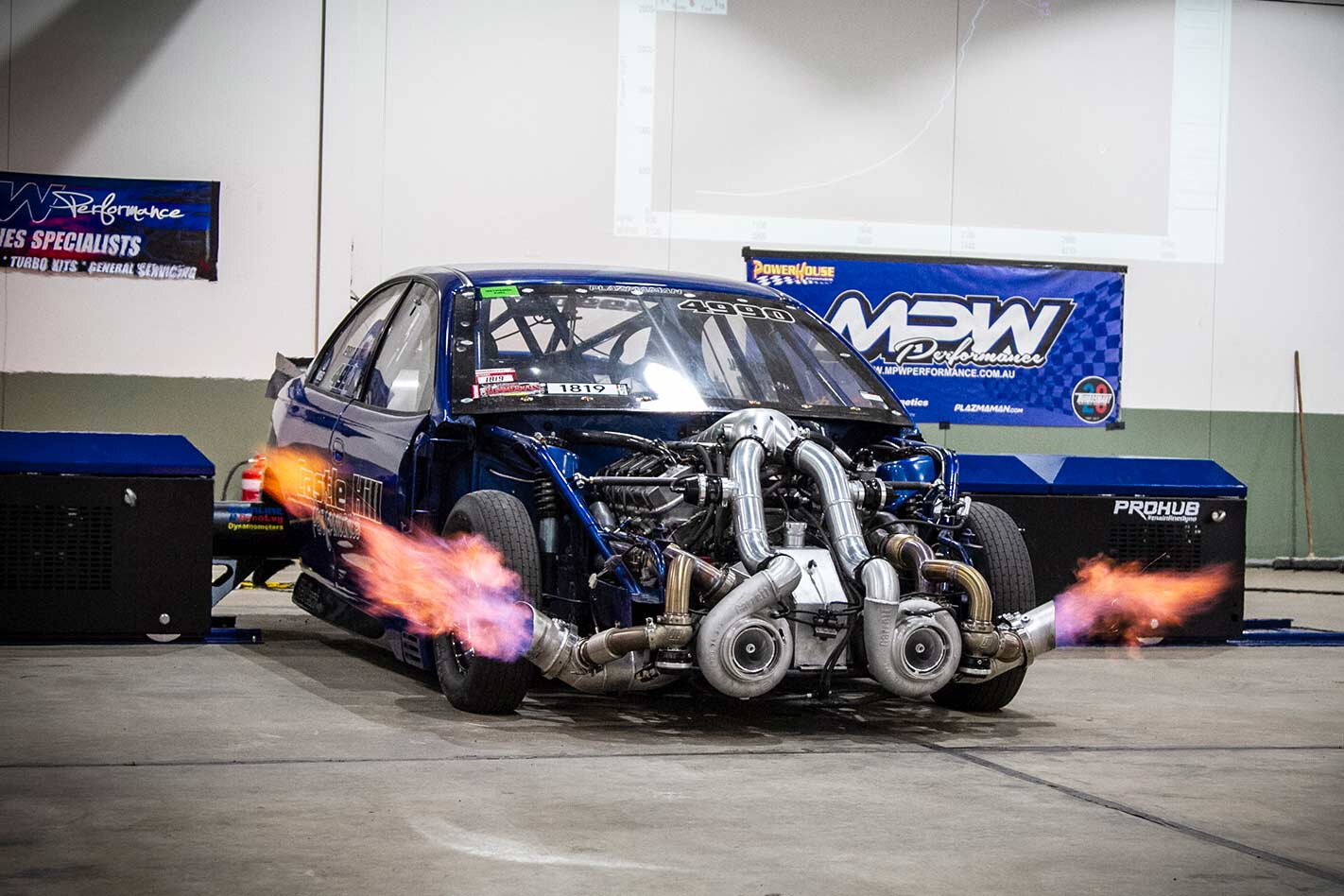 Dale Heiler of Castle Hill Performance has fitted NEXUS R5 units to a number of race cars. “Controlling the whole car from one point makes things very simple, and every car we’ve installed a NEXUS on has PB’d straight away,” he says. “The ECU component uses newer tech, faster processors and more refined firmware. There’s nothing else on the market that can do what the NEXUS can do”

The same all-in-one ethos applies to the new NEXUS software. You don’t have to use separate software packages or hire Stephen Hawking to get the ECU to talk to the PDM; the ECU is the PDM, with the PDM functions configured in the same software package you use to set up engine functions and tuning.

This makes it particularly handy for someone building, say, a Drag Challenge car. Not only can the NEXUS R5 run your twin-turbo LS or quad-cam Coyote (with all the sensors, boost control and other functions required), but it can also control your chassis electronic devices (headlights, indicators, wiper motor and so on), as we’ve seen Bill Perkovski and the Moits Racing crew achieve with a recent NEXUS R5 installation in the iconic WOG007 Cortina. That’s why Haltech has called it a Vehicle Control Unit – it can control your whole vehicle.

The team at Moits Racing has just completed a frankly quite stunning rebuild of the iconic WOG007 Cortina. As part of that rebuild, the entire car was wired using a NEXUS R5, with functions such as the headlights, wipers, hazard lights, nitrous bottle heater, demister and fuel pump all controlled via a Haltech CAN Keypad, simplifying the wiring and putting everything at the driver’s fingertips

You never again have to be stuck on the side of the road 800km from the Black Stump because you forgot to bring a fuse. Each PDM output in the NEXUS can be set up with a programmable fuse current limit – basically a virtual fuse that you can set the over-current trip level for – as well as how long to wait before it resets after being tripped and how many times it can trip before it’ll put the car into limp mode.

The NEXUS R5 also has inbuilt automatic transmission control for electronic solenoid-type transmissions, and it comes pre-set with configurations for a bunch of popular boxes from Ford, GM and Toyota, plus the ability to configure your own should that need arise. Add to that a drive-by-wire throttle or two and the NEXUS R5 will do cruise control – perfect for long road stints on DC! It also has dual knock detection and onboard dual widebands for O2 control, which work with the unit’s long-term learning functions to refine your tune as you go.

At $5500, the NEXUS is more expensive than most traditional ECUs. However, when you factor in the cost of a 15-channel PDM, dual NTK wideband kit, G-meter and everything else that’s built into the unit, it makes a lot of sense from a cost perspective

You could stop right there and have a really nice, tough cruiser that loves the highway, and be super-happy with that. But what if you did want to take it to the strip, or on Drag Challenge? The NEXUS can perform all your race functions too, including transbrake control, race timers, nitrous control, anti-lag, launch control, traction control and torque management. It also sports 512MB of onboard datalogging, and you can log a huge number of channels at impressive speeds. Once you’ve set it all up, every time your laptop connects to the VCU it will automatically download the logs taken since it was last connected. Once the log has been downloaded, the VCU will automatically ‘loop’ a new log over the top, so in theory you'll never run out of space.

The NEXUS R5 features 18 injector drivers, so there is no need to fit an expansion module to drive two sets of injectors on a V8 like there was with existing Haltech ECUs

You don’t even need to connect via cable; thanks to the unit’s Wi-Fi connectivity, the downloading process can start as soon as the VCU is within range of your laptop. Some racers and tuners (Ash Mason from Wiring & Tuning Solutions, for example) who were early adopters of the NEXUS R5 have reported being able to download and see datalogs and then make changes to the tune via Wi-Fi while travelling in the tow car down the return road after a pass! It is all password-protected, so the chances of someone hacking you and changing your tune mid-pass are extremely slim, but if you’re the type of guy who wears tinfoil under their race lid, you can always turn the Wi-Fi off.

The NEXUS R5 mounted on the dash of Sean Muscat’s radial Cortina. “NEXUS is complex to install compared to a traditional ECU because there are so many functions it can perform, but it all happens from a central point, so it’s easier in that way,” says Dale Heiler, who tunes the car. “There are 64 pins on the connectors, so there are a lot of ins and outs and it takes a lot to configure, but the Wi-Fi communication makes that part easier”

So, will a system like the new Haltech NEXUS R5 change how we build street machines? Well, it could certainly change the way we wire them, and we reckon it won’t be long before we see a fully NEXUS-controlled car grace the pages of Street Machine.