Were the summer temps making your cruise sessions a little sweaty? How about slipping into something more comfortable?

IT’S TRUE what they say: ‘Happy wife equals happy life.’ Phillip Vella was getting married and his XY HO replica was going to be the bridal ride, so to ensure his betrothed doesn’t get all hot and bothered on her big day, he figured he’d better fit an air conditioner. Rohan Hutson from Australian Auto Air is here to show us how it’s done.

Any air-conditioning system that was fitted to a classic streeter as original equipment will usually be well past its use-by date, and the mandatory replacement of R-12 refrigerant gas with R-134a is another issue. It’s possible to convert your original system over to R-134a, but it has to be in top condition, and if an a/c system hasn’t been running for some time, it won’t be. So, you’ll probably have to replace an old factory unit.

The easiest way to air-condition a street machine these days is to fit a new system designed to run on R-134a from the outset, like the Vintage Air unit shown above. People have been known to transfer OEM R-134a systems from one car into another, but often this doesn’t work very well. On the other hand, aftermarket systems like those offered by Vintage Air are designed to fit the widest range of cars, and they work properly. They’re also pretty easy to fit.

Vintage Air offers ready-to-fit kits tailored to most American muscle cars. But if the steering has been converted to RHD, such kits will no longer bolt straight in. Rohan says people think you can just flip them and fit them, but it’s not quite as simple as that; modification is necessary. And of course, the Americans don’t make kits for Australian cars. 1. The kit is supplied with a number of spacers, for both the bracket and mounting the compressor to the bracket. Using a straight edge in the belt grooves as shown helps to line up the compressor, power steering and crank pulleys 2. Remove the bonnet latch mechanism, slide the condenser into place and fasten it to the radiator support panel by the tabs on each side. The condenser receives very hot compressed gas from the compressor, and the heat difference between the compressed refrigerant gas and the air passing through causes the refrigerant to condense back into liquid 3. This is another installation that shows the mounting tabs more clearly. It also shows that things can get pretty crowded behind the grille when a trans cooler is added. Remember, all these things restrict airflow and add heat to the system. Your cooling system should be in good shape 4. The receiver/dryer receives liquid refrigerant from the bottom of the condenser. It ensures there is a reservoir of liquid coolant to draw from and also removes any moisture. It’s often fitted next to the condenser, but Rohan likes to tuck it up behind the passenger-side headlight panel as shown. A pressure switch that turns the compressor on and off is supplied, and must be fitted 5. It’s best to use existing holes, but it’s not always possible. Rohan uses a step drill to make a hole for the return line to the compressor from the evaporator. 6. The wrong belt tension can be the cause of problems in an air-conditioning system. An idler/tensioner pulley is part of the kit and bolts to the front plate of the compressor bracket as shown. It has a hex form so that you can use a spanner to adjust for the correct tension on the belt 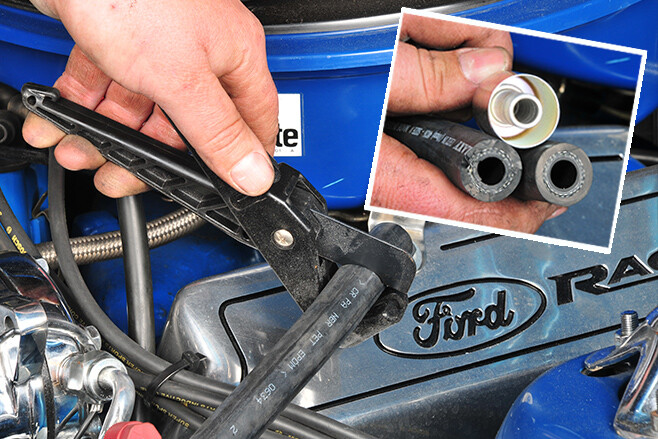 7. If you are fitting the kit yourself, Rohan supplies ample hose for the job. You work out where all your components are going to be, run the hoses where you want them and cut to length. Use a proper hose-cutter (they’re cheap), as you want a nice clean cut. If the ends are all torn up (inset, lower left hose) it increases the likelihood of leaks 8. Because hoses come on a roll, the cut lengths will have a natural curvature. This can be used to your advantage to bypass obstacles. If you’re installing them yourself, it’s important to mark their orientation within the fittings as shown. This is necessary since one of the things you can’t do yourself is crimp your own hoses; a licensed operator with the correct equipment needs to do the job 9. The Vintage Air unit is very compact compared with the OE design seen behind it. You can see the black straps that are part of the kit, but Rohan had to make the convoluted aluminium bracket you see here in order to attach the front strap to an existing point under the dash, as it’s a bit of a mess in there (below) 10. Removing the glovebox provides better access to the rear of the dash, and also allows the new heater tap supplied with the kit to be fitted out of the way behind it. The tap is where the old coolant lines will meet the new ones leading to the heater core. The line from the pump is attached to the tap (top hose), while the other is simply joined (bottom hose) 11. Here you can see how the unit is finally positioned. The hoses for the heater core are coming in from the upper right (A). The lower air-conditioning hose comes from the receiver/dryer (B) while the thicker unit shown above it and attached to the right is the return line to the inlet of the compressor (C). A supplied hose attaches to the elbow on the underside of the unit to drain moisture outside the cabin (inset) 12. This is a view of where the evaporator unit was finally positioned. Vintage Air kits come with all the necessary instructions for wiring; it’s not a terribly complex task. At the far left of the switch panel is the thermostat. 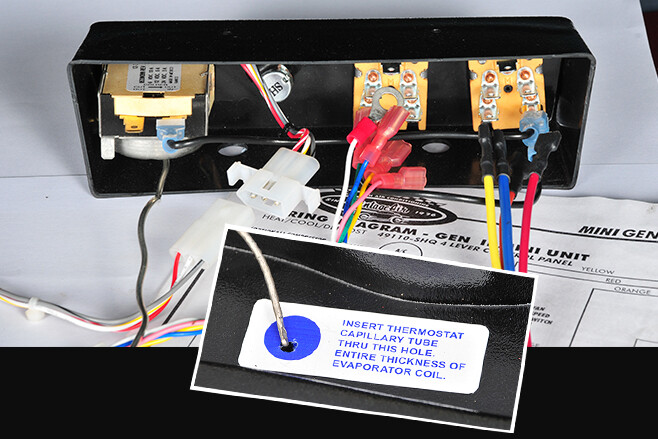 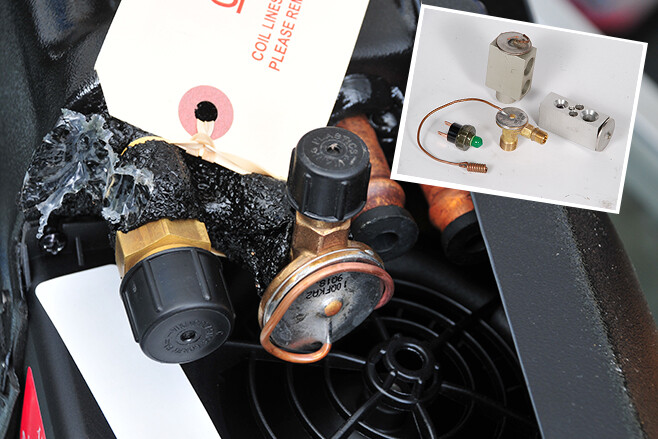 13. The fitting at left is the return line from the evaporator. The one next to it with the copper tube is the thermal expansion (TX) valve. A sensor coil on the end of the tube is located in the evaporator outlet. When it gets too cold, the TX valve limits the supply of refrigerant to the evaporator. The two copper fittings behind are the connection points for the heater core 14. Phillip got hold of some OE kick-panel vents for his installation. They were from a Fairlane and were originally brown, but he painted them to match the car. The centre vent is also OE Ford. Vintage Air kits come with ducting and a range of outlets. The round ones are the ProLine range and fitting them couldn’t be easier; they simply push into the ducting 15. The downward-facing slotted outlets direct air to the floor. They don’t require fittings. The two half-circle outlets on the top of the unit on the firewall side are for the elongated windscreen vents. The three outlets on the cabin side of the unit are for the side and centre vents. Again, the ducts just push onto the outlets and are retained by small gripping barbs 16. The under-dash control panel fits pretty neatly just above the console and doesn’t look out of place. The soft-grip knobs even have an outward flare that’s at least slightly suggestive of the factory XY knobs. 17. Vintage Air recommends insulating the floor and firewall with Dynamat or a similar product to maximise efficiency, and Phillip says he plans to do this shortly to complete his installation. The cost of the Vintage Air kit shown here is about $4500, including installation. Which is a small price to pay compared to the value of the car, and it allows you to cruise in comfort all year round. Winning! Phillip reports that the system runs superbly. The only problem is that he can no longer hang his elbow out the window while cruising. So while he may not look as cool as he did, he’s actually much cooler. Remember, you can install a system like this yourself, but you can’t crimp your own hoses or gas the system; doing so is illegal without a licence. Find out more by visiting www.australianautoair.com.au or calling (03) 5975 1455 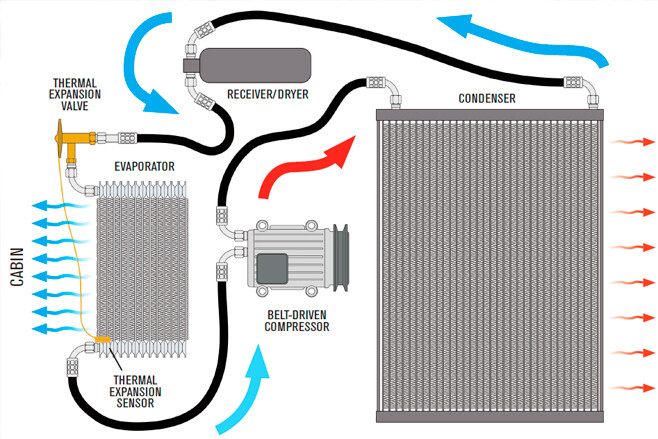 Air conditioning works pretty well when everything is new, but over time (a decade or more) seals can perish and joints can leak, reducing the efficiency of the system to a point where it doesn’t work at all. See an air con specialist before things get to this point.