PULL up the carpets of any luxury car and you’ll find several different layers of sound deadening material underneath. It’s one of the key reasons why they sound so much more solid than their cheaper brethren. The sound deadening eradicates that tinniness, making the cabin a quieter, calmer place.

One of the most effective layers is the heavy bitumen-like matting bonded to the metal structure of the car. An unfortunate downside of bitumen-based products is the smell. Resomat from Tru-Fit Carpets is a German-developed product, which sports an anti-drum and noise absorption layer, combined with an aluminium heat barrier. However, it’s not a bitumen-based product, so it has all the benefits without the nasty odour. Those benefits include the control of panel vibrations (drumming), improved audio system clarity and performance, along with reduced occupant fatigue due to lower NVH (noise, vibration and harshness) levels. Getting the Resomat treatment is an RRS reproduction ’67 fastback Mustang, which Robert Street Restorations is building up.

The customer wanted the cabin to be as civilised as possible, which called for full coverage with Resomat. We dropped by to check out this special ’Stang while they gave it the full Resomat treatment. 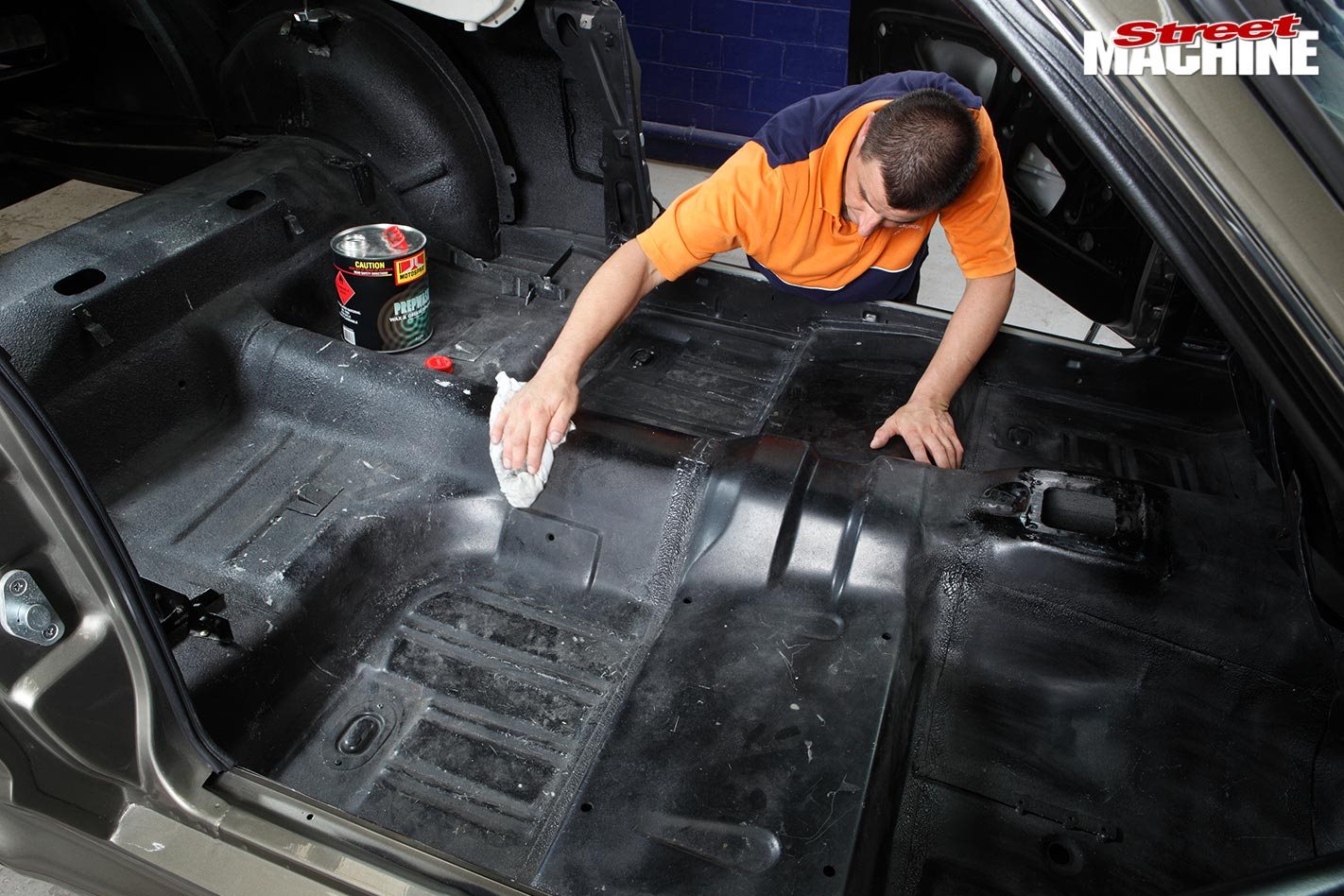 1. Adhesive sound deadening products such as Resomat work best on good clean surfaces. Being brand new, the floor of this Mustang was squeaky clean. With older machinery, thoroughly remove all the old underfelt and horsehair products, along with any flaking or rust, and undercoat and paint any bare metal to inhibit corrosion. All that’s left then is to vacuum and wipe over with Prepwash. 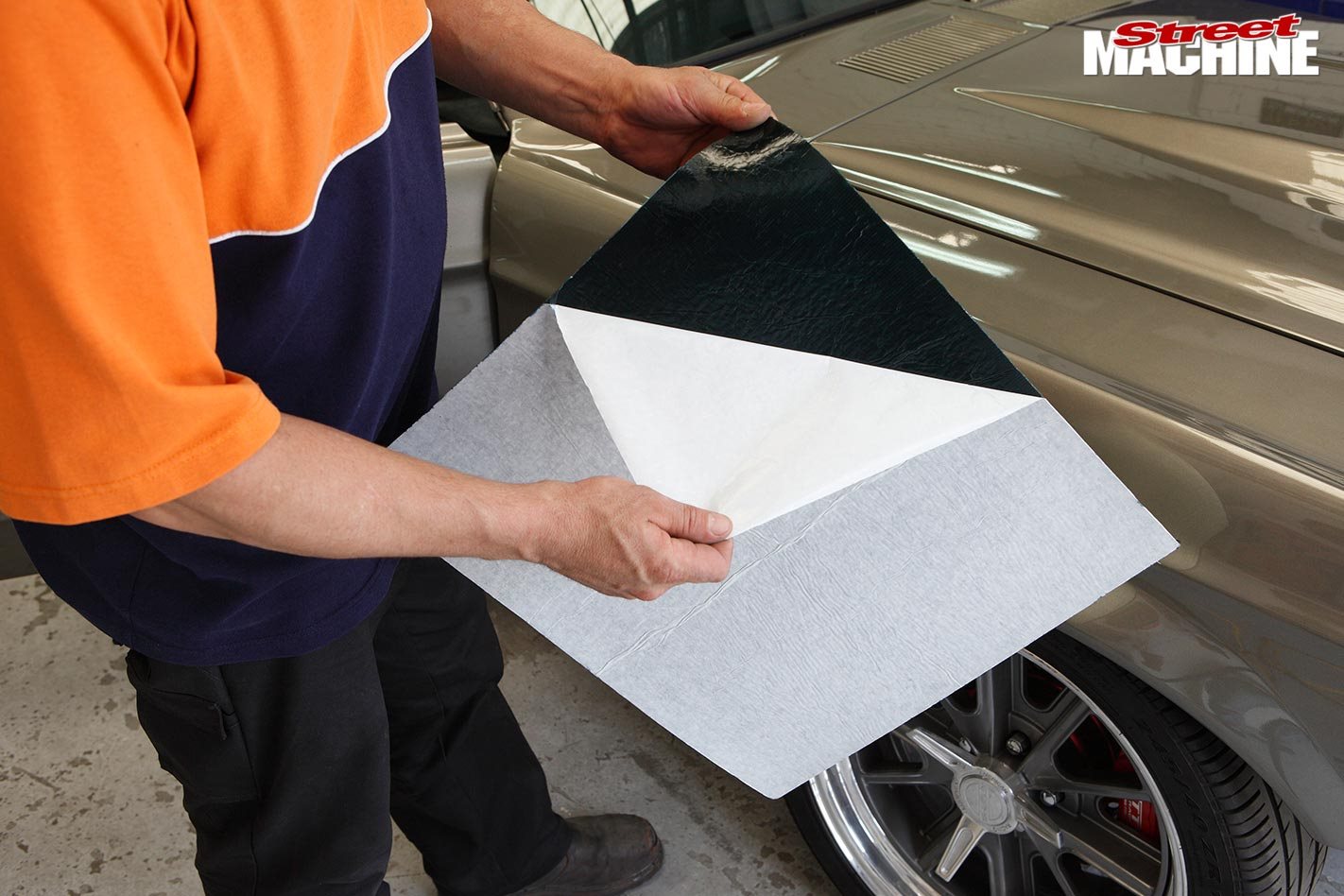 2. Resomat features industrial-grade adhesive backing, which requires firm hand pressure to produce a long-lasting bond. As with most contact products, you really only get one chance. We did find that prior to the application of pressure you could pull it up and reposition it. However, the bond didn’t appear to be as good. After pressure is applied, Resomat takes a firm hold and is pretty much in place for life. 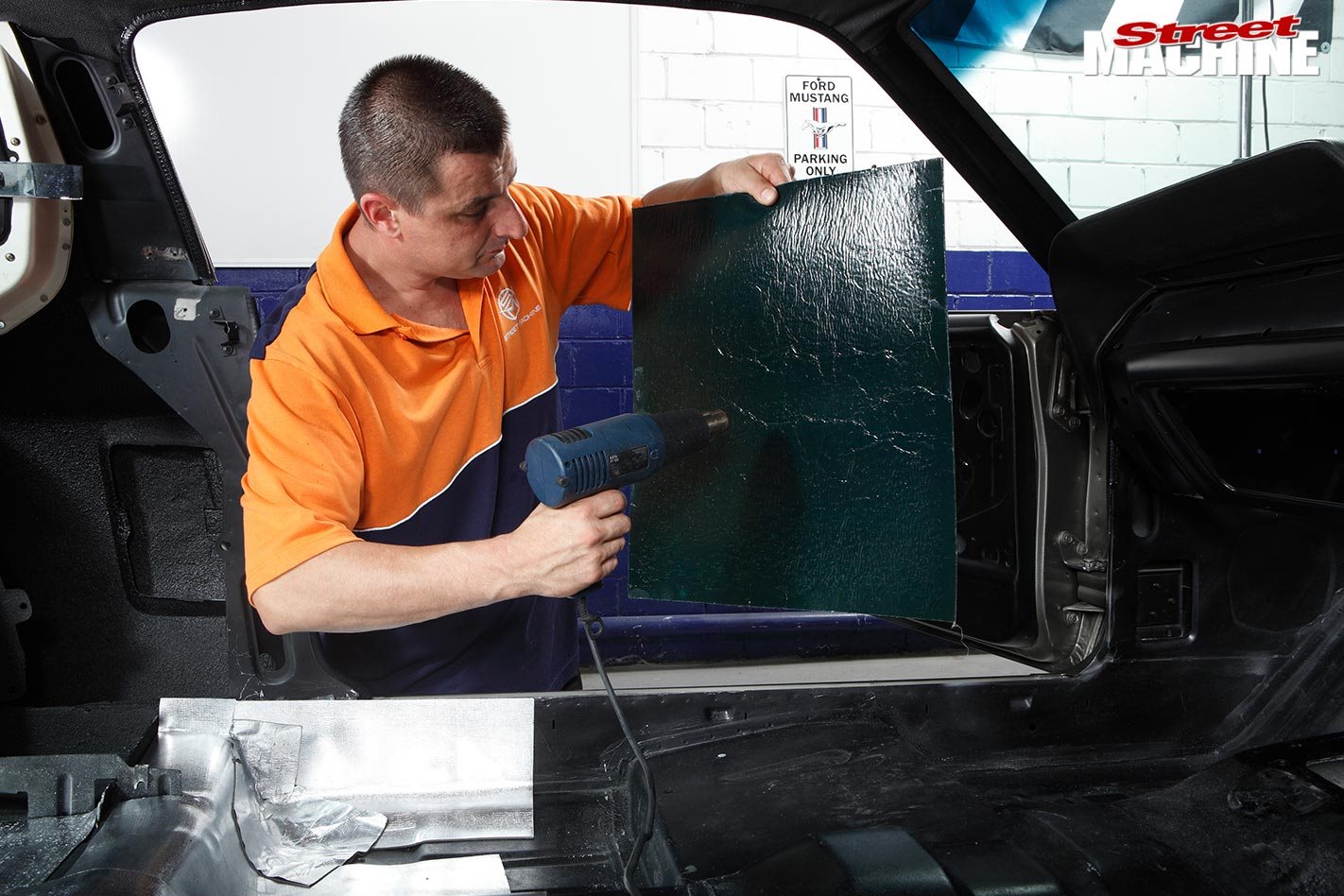 3. Although relatively flexible out of the box, the matting becomes far more workable once heated. Sit it in the sun to help it soften, then generously heat with a hot air gun prior to installation. Wearing gloves stops scalding, but the gloves make handling difficult. We found dropping it place without gloves, then using a rag to protect the fingers while firmly pressing it into all the detail areas worked well. 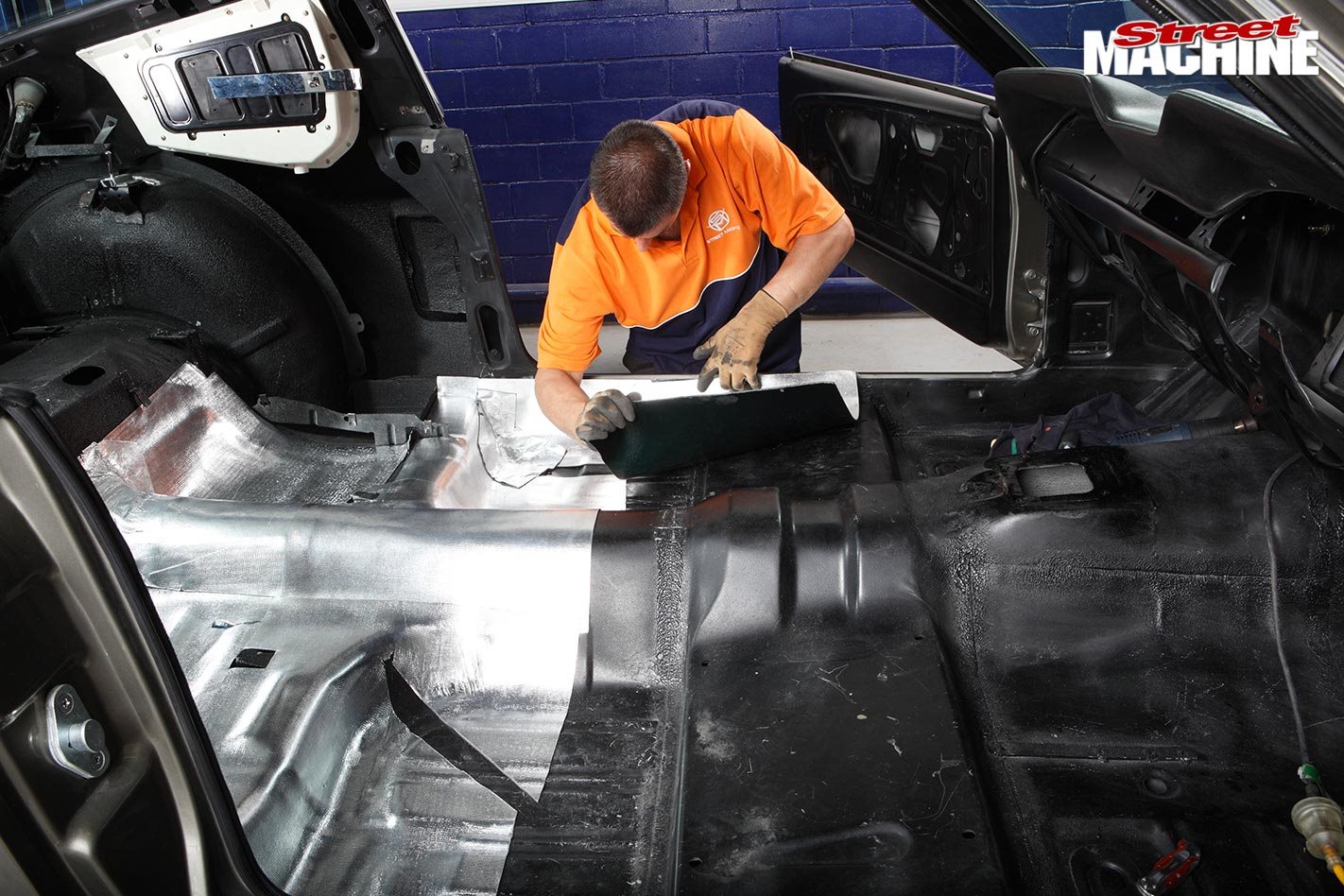 4. Two sizes of flat sheet are available: 520x225mm and 490x490mm. Larger sheets result in fewer joins but are harder to handle, especially hot. Place the matting on the surface as you would lay down a sticker, pressing it down as you go. To eliminate acoustic leakage, overlap each piece by 12-20mm, except on the roof where you should butt the pieces to maximise the contact patch and inhibit peeling. 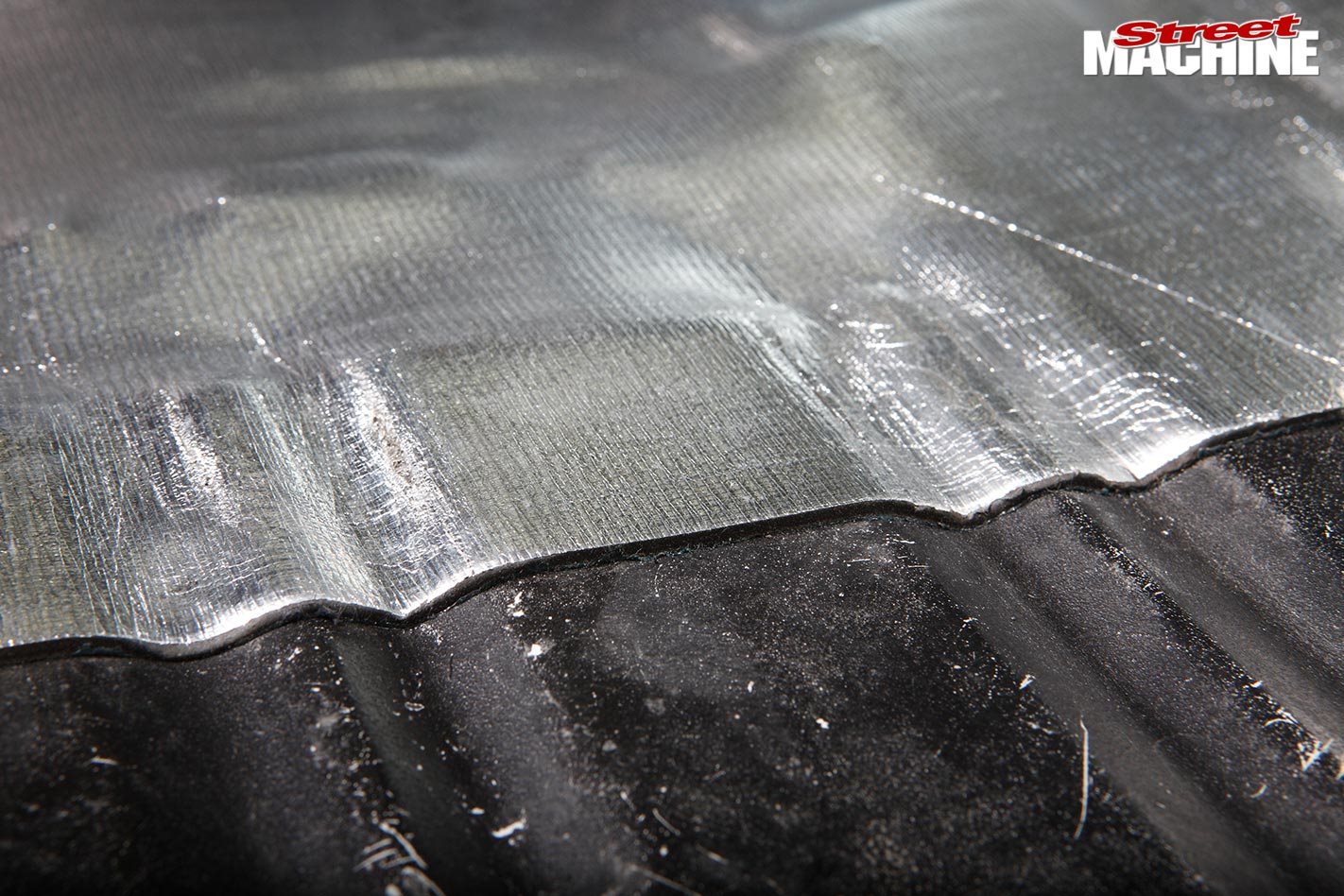 5a. It’s important that the Resomat is pressed firmly against the surface. Not only does this make the adhesive attain full strength but the matting also works best when bonded flush against the metal with no air gaps. Use heat and pressure to work the Resomat into all the detail areas. 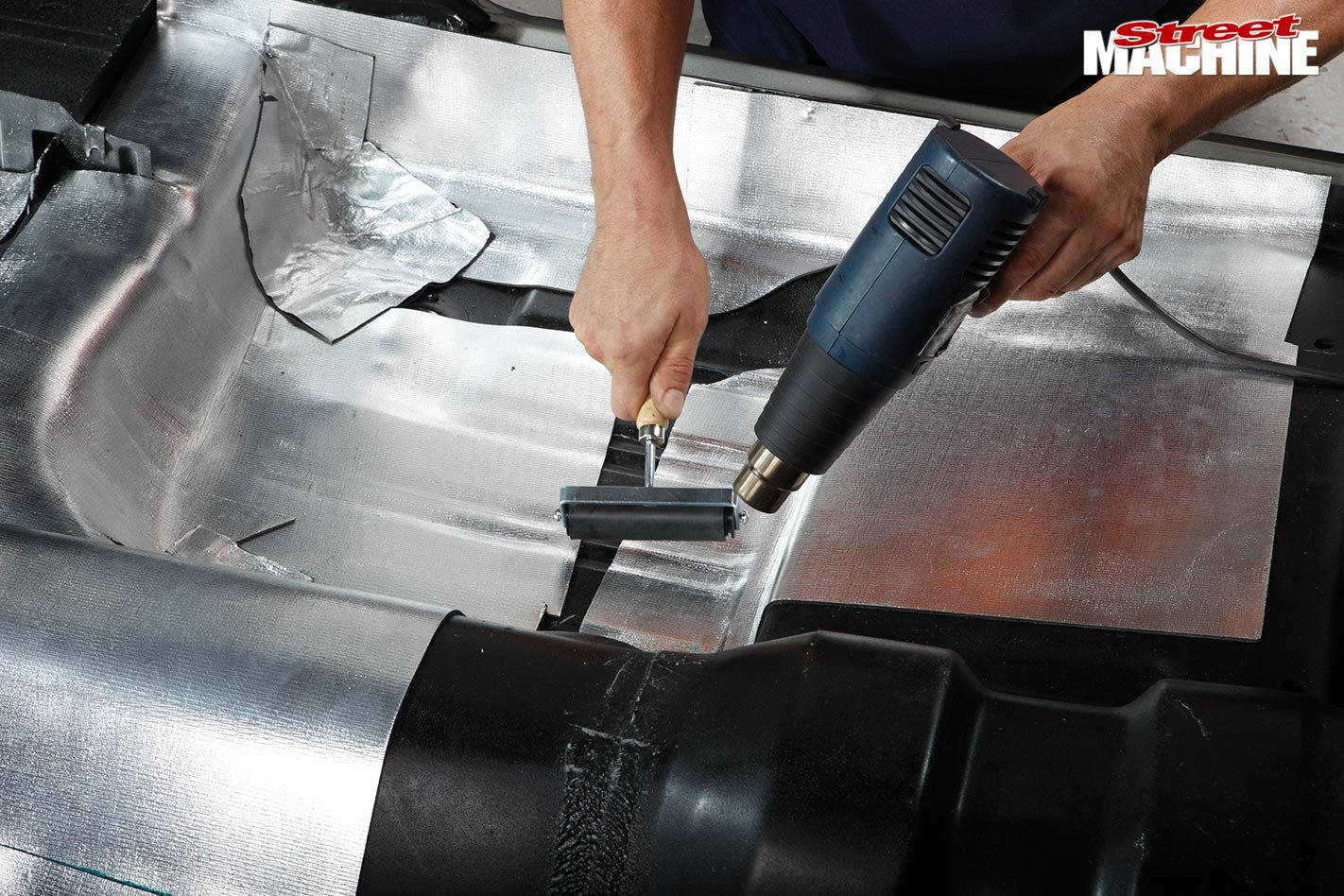 5b. A roller from a hardware or art shop works a treat on the large flat areas, while hand pressure will get it into all the small details. 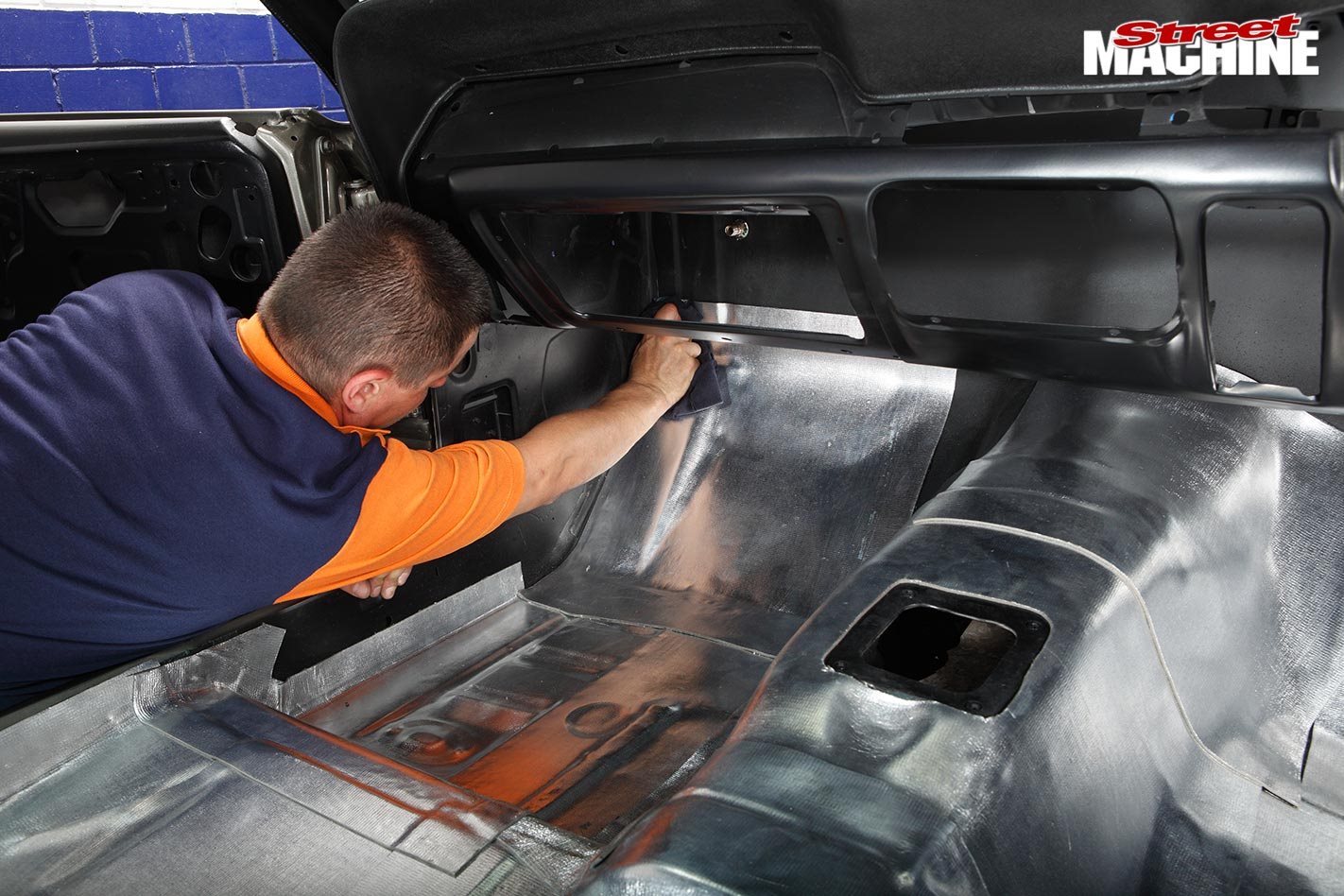 6a. The firewall is a big drummy panel, which also gets very hot. Extend the Resomat as far up as possible — the matting went right up the scuttle in this Mustang. 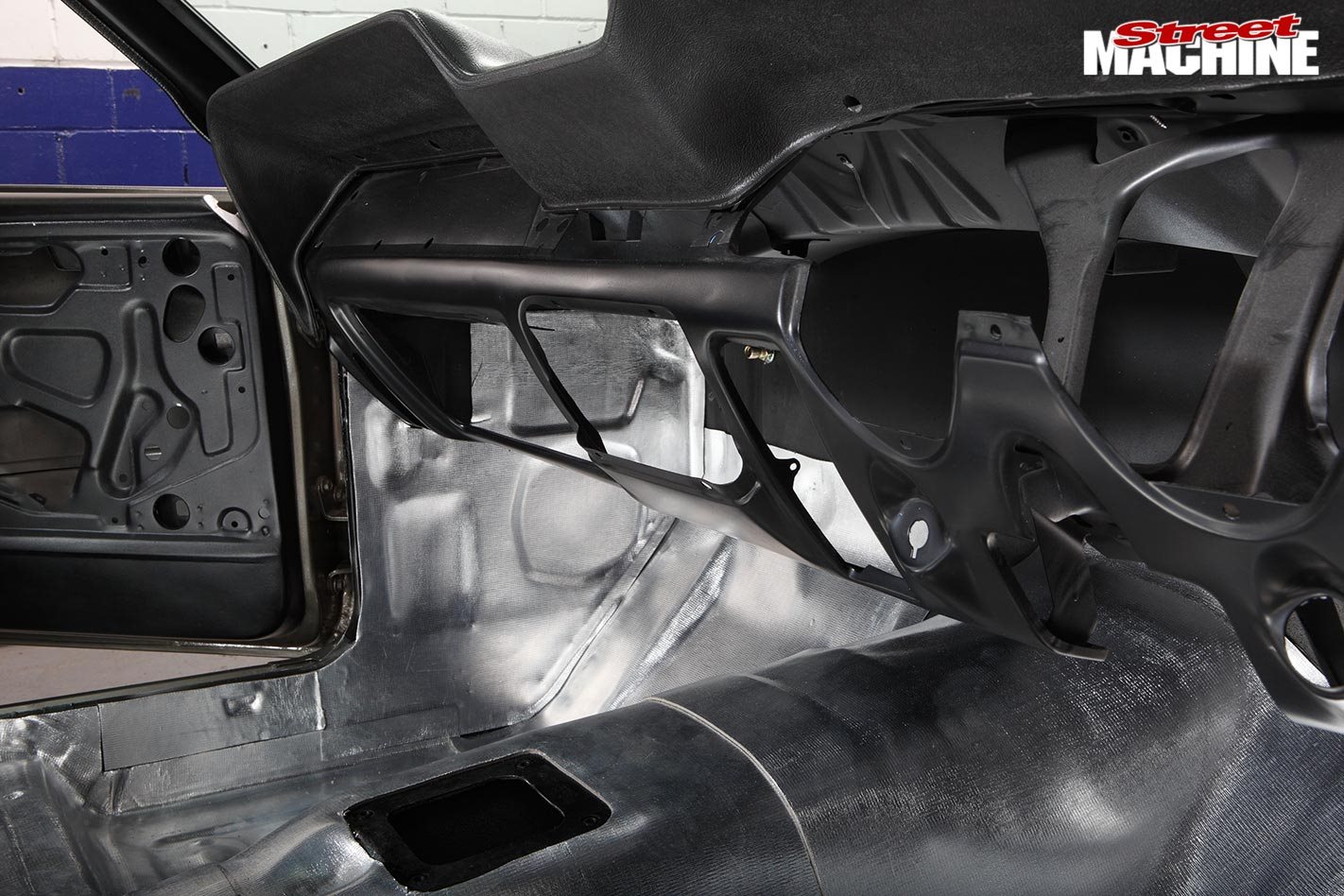 6b. While covering every metal surface, such as the kick panels (above), door pillars and roof isn’t mandatory, covering them will make a noticeable difference. Tru-Fit offers two thicknesses: 3mm, ideal for vertical surfaces, and 5mm for any horizontal surface. 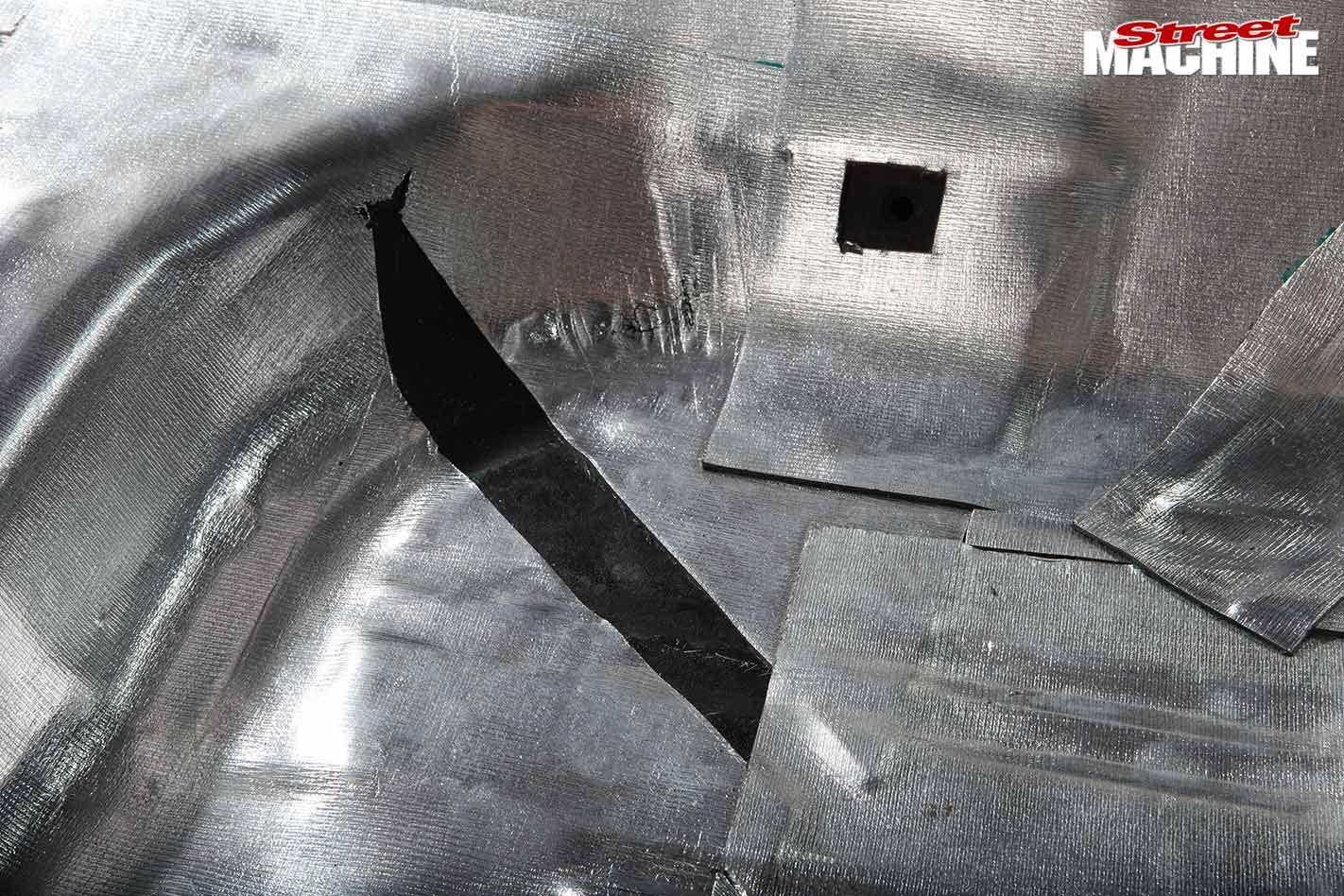 7a. The aluminium foil backing has a finite amount of stretch and you may have to relieve some of the corners with a cut like this. However, such voids will allow noise to leak through so for maximum benefit, ensure you get 100 per cent coverage. 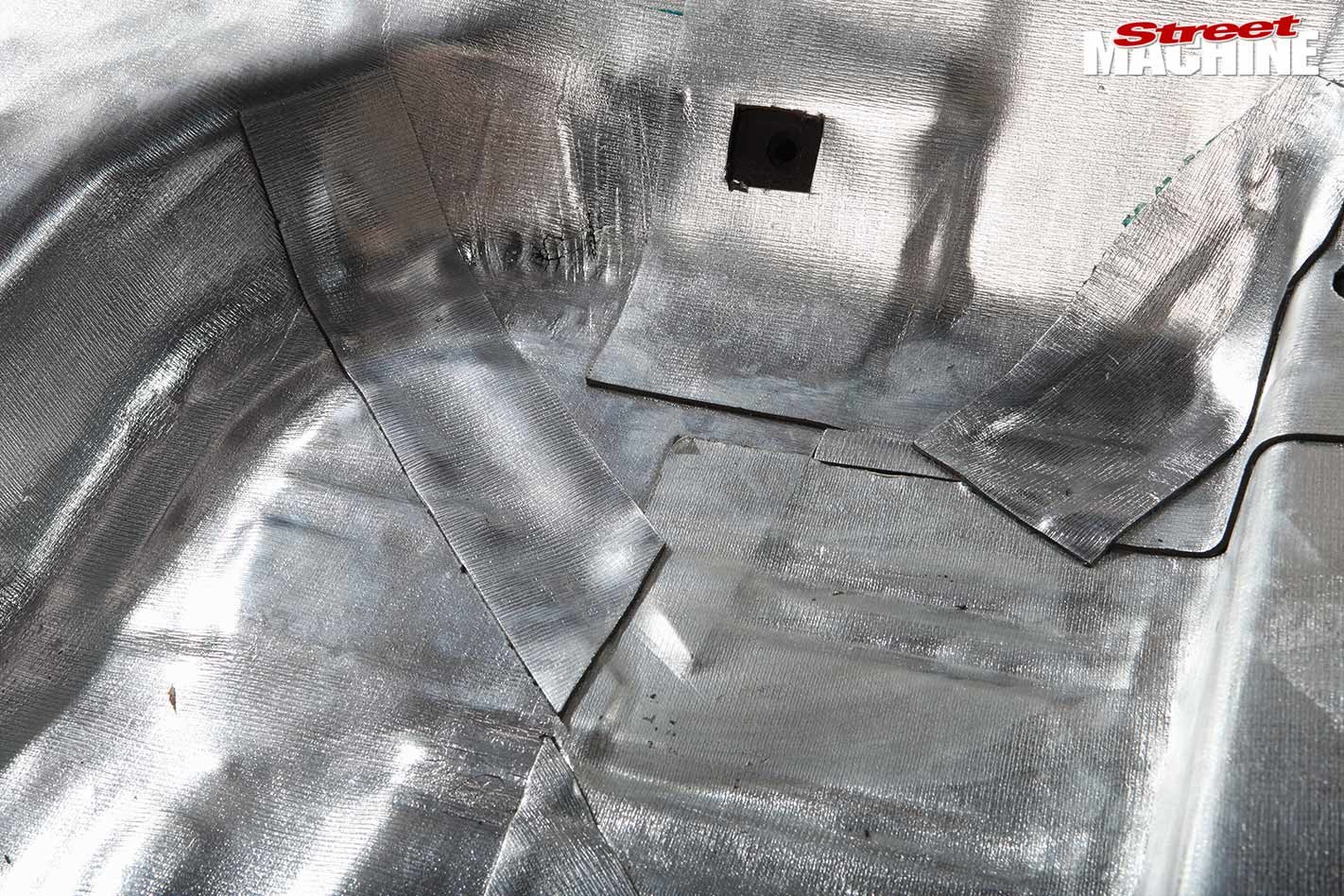 7b. For ease of fitment later on, cut away a generous amount of matting around seat and seatbelt mounting holes, as well as the screw holes for interior trim panels. 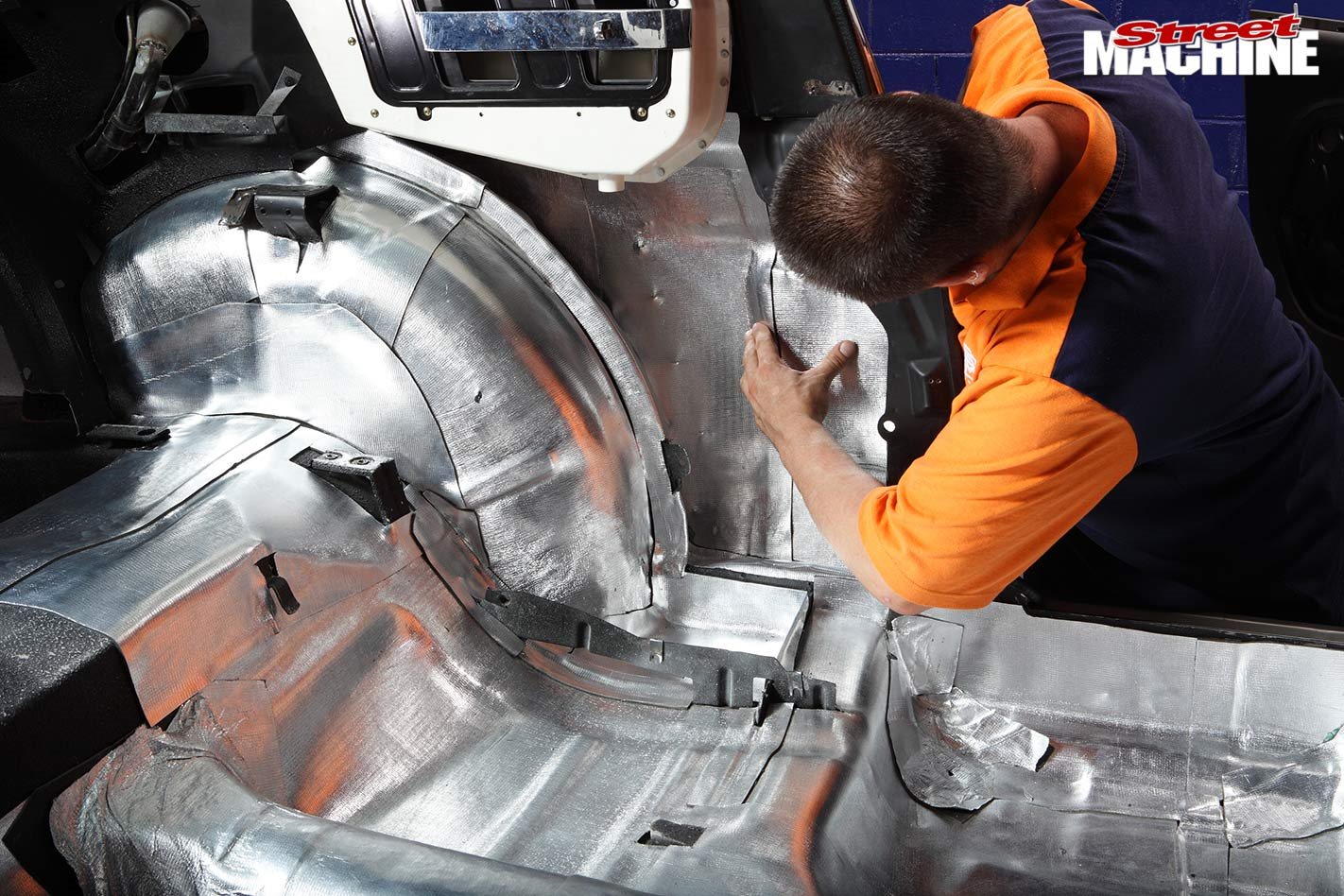 8. The firewall and wheel arches/housings are major sources of transmitted road noise; covering them will have a huge effect. When doing vertical surfaces such as inside doors or rear quarter panels, ensure the surface is scrupulously clean for maximum adhesion. Also, start at the bottom and work up. That way any overlap will be at the bottom of the sheet rather than the top, which will inhibit peeling over time. 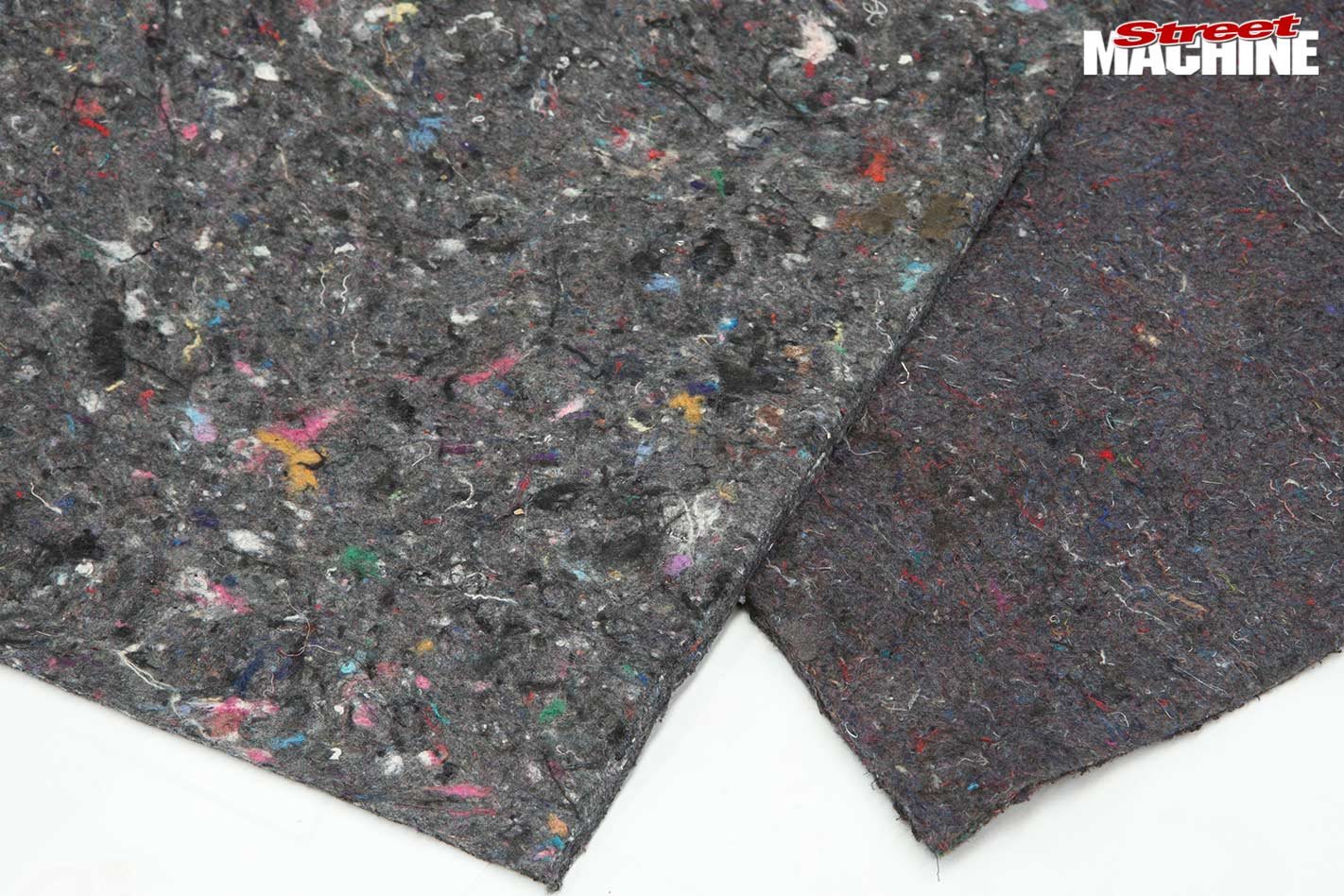 A. While Resomat blocks unwanted noise and vibration from being transmitted through body panels, underlay absorbs sound inside the cabin. Tru-Fit’s standard underlay (left), as used by the Australian auto industry, won’t rot and is more effective than ordinary jute felts. Premium (right) features an odourless bitumen layer between two layers of noise-absorbing felt for even greater effect. 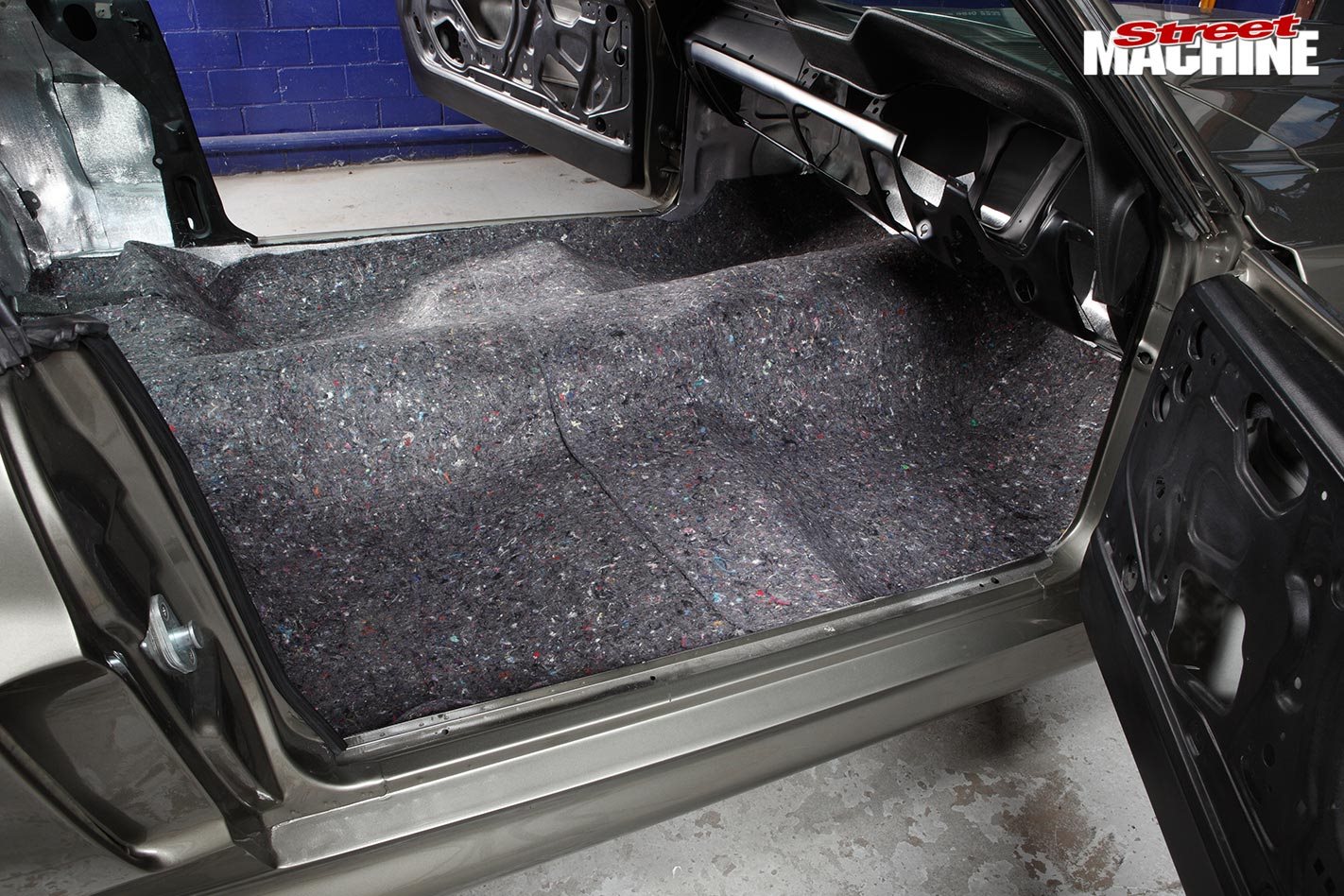 B. Standard (shown) is cheaper and lighter; premium is ideal to double-kill transmitted road noise. Both come in 1550x920mm sheets — two were more than enough to cover the floor of the ’67 fastback. On the floor it just sits in place but you’ll need to use contact adhesive if you wish to stick it to vertical or inverted (roof) surfaces. It’s not recommend for use inside doors due to the presence of excessive moisture

SOUND deadening materials like Resomat are one of the few products where more is better. Adding a couple of pieces here and there to the middle of large panels will make a noticeable difference. However full coverage, as shown here makes a massive difference — passengers will be able to hold an easy conversation rather than shouting at each other. 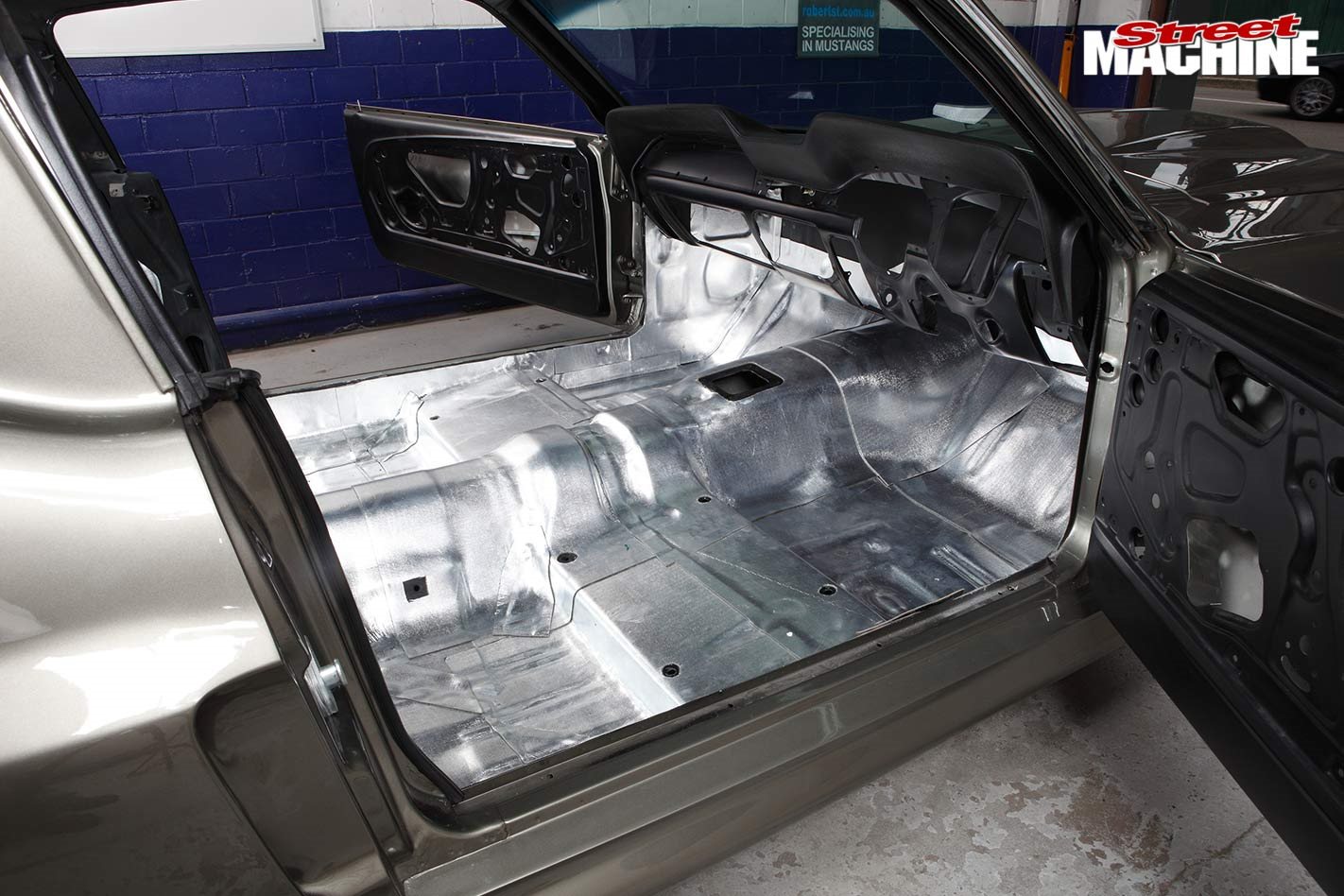 Resomat can easily be applied singlehandedly, though having a helping hand certainly makes it easier. We ran out of material on the day of the shoot; Robert Street did the rear quarter panels, the door skins and door frames later. Doing the doors not only eliminates most door rattles but also gives them that nice solid ‘clunk’ when they shut. 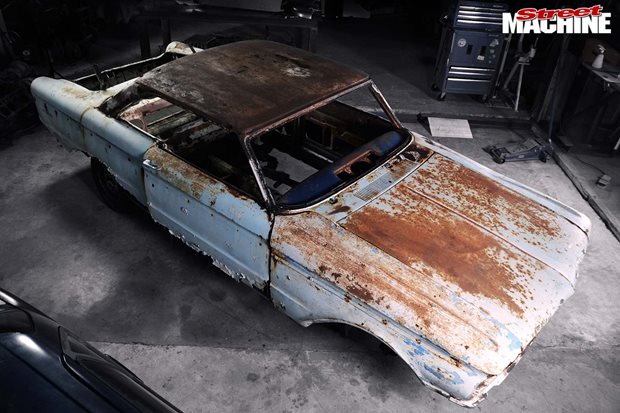 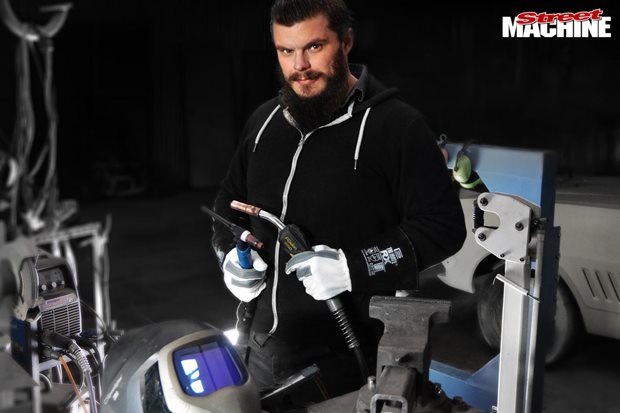