Before you go accusing that bloody useless part of letting you down, it's best to find out why it failed

AUTOMOTIVE components rarely break — provided they’re well designed, well made and used within their design parameters. And when breakages do occur, what seems like a failure in one component is often due to a problem elsewhere. So let’s have a look at why it all happens. 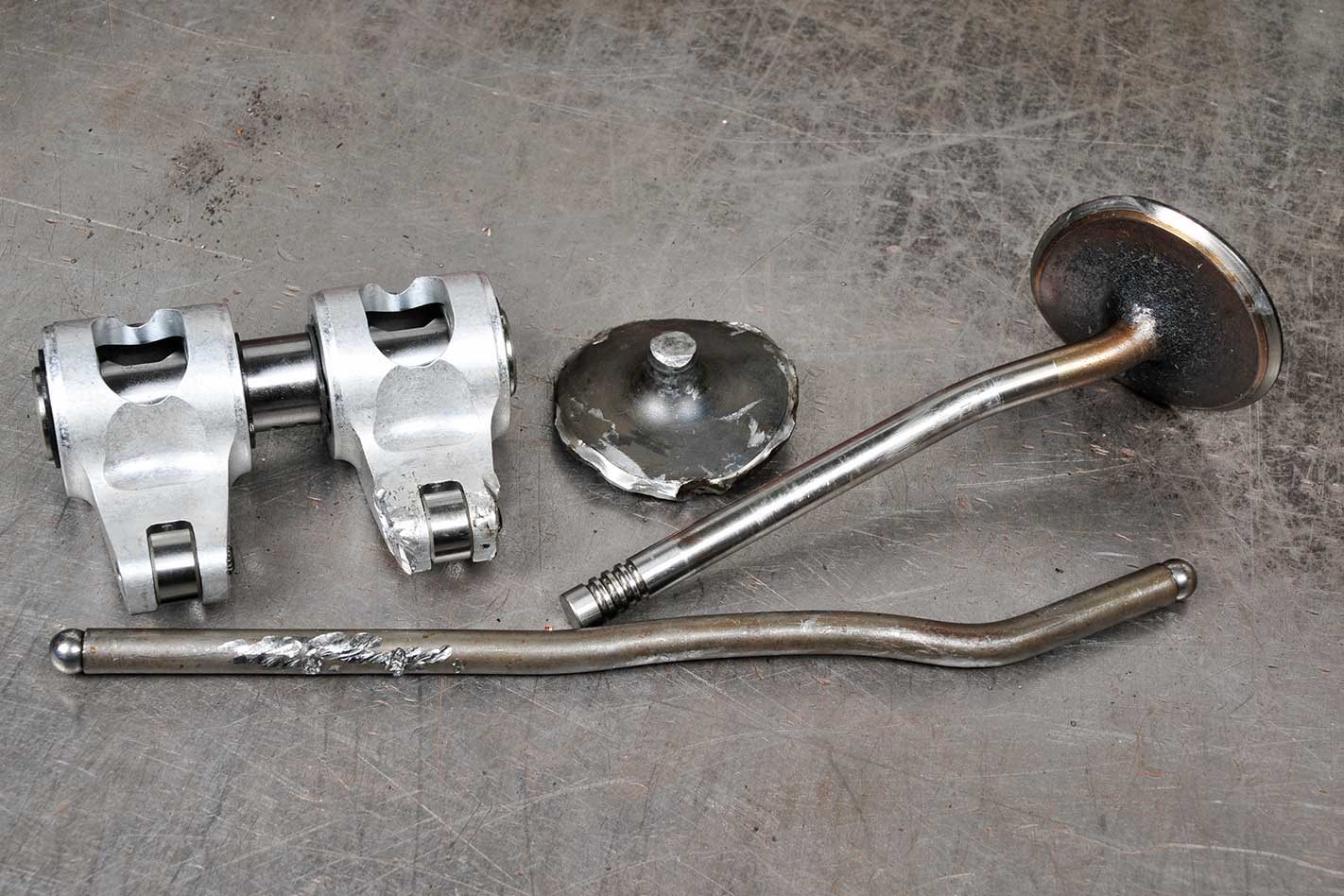 TO UNDERSTAND component breakages, a couple of terms need to be defined.

If the stress isn’t too great, the strain will be elastic and the object will return to its original state when the stress is removed. No problem.

But when stress rises to a certain level, strain manifests as permanent distortion — the component remains physically altered after the stress is removed. This is known as plastic deformation and is the prelude to complete failure.

Plastic deformation (stretching/necking/buckling) is the result of excessive load and causes the component to become thinner in the middle. If the tensile stress is further increased, the necked section becomes even thinner. Eventually the cross-sectional area becomes too thin and the component breaks. 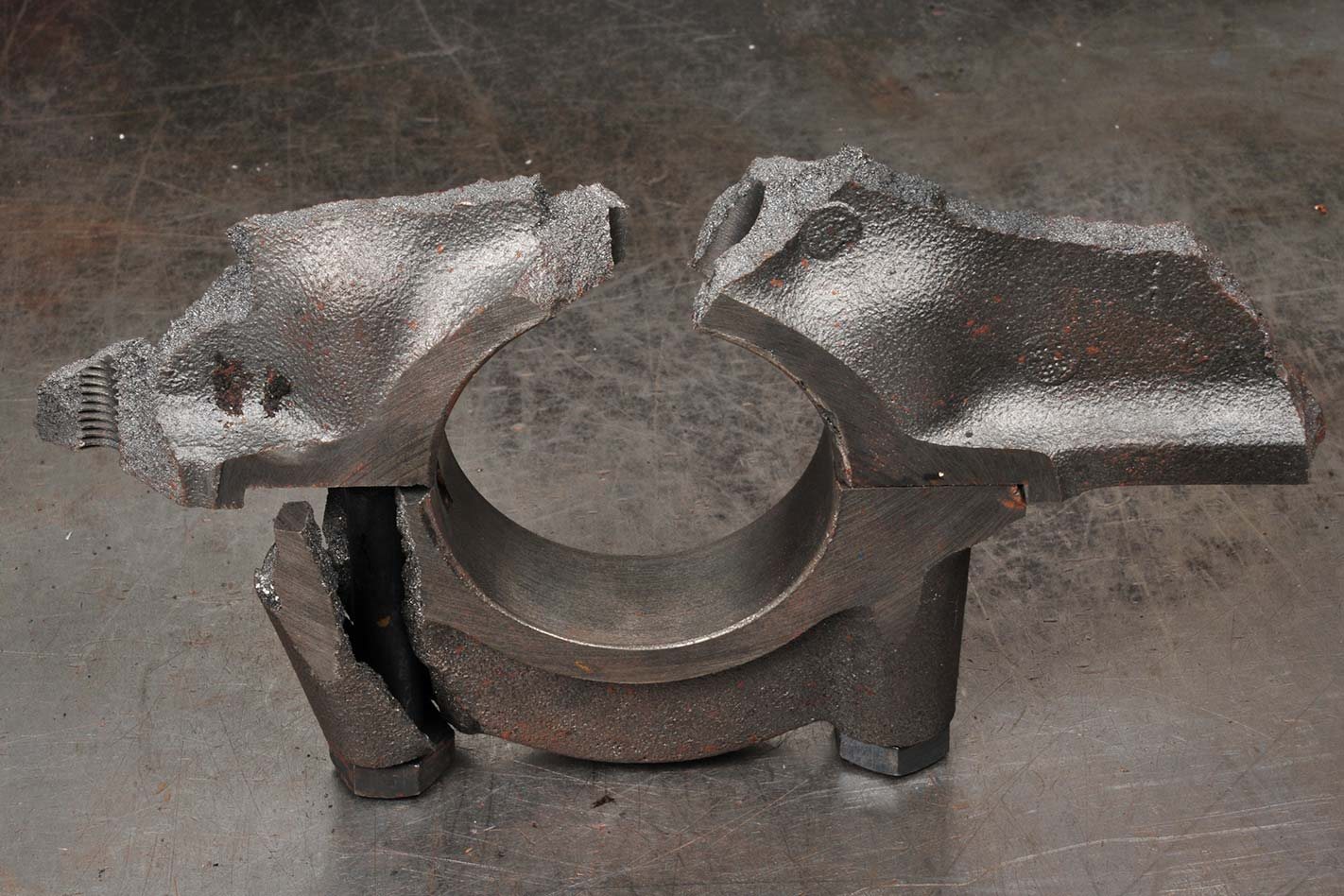 This fractured web from a Windsor resulted from a faulty ignition system that pushed advance to 60 degrees. The coarse granular crack indicates brittle fracture, which is characteristic of a sudden failure

ANYWHERE a component has an abrupt change in form or cross-sectional area is a stress riser — it increase the likelihood of breakage. Ideally, components should be designed so that stress is distributed evenly throughout but this ideal. A crankshaft, for instance, must have offset rod journals joined to the main journals by webs. This 90-degree junction is a region of abrupt change that concentrates stress and localises strain. Generous fillets alleviate the problem by spreading the stress over a greater area.

Cracks are among the sharpest concentration points possible. What’s more, a crack often begins in a highly stressed area. Every time force is applied, the crack opens up a little more, which reduces the cross-sectional area, in turn allowing the crack to open yet further. This happens over and over until the component fails completely.

CRACKS or structural flaws that become larger with each application of a cyclical stress are known as fatigue failures. Cracks are not only a surface phenomenon — they also occur internally. Stress affects internal cracks slightly less than surface cracks but the end result is the same. Structural flaws in materials such as shrinkage cavities also behave like cracks and can cause component failures.

Looking at a fatigue break, you’ll see a series of smooth, crescent-shaped marks that expand, one upon the other. These are called beach marks and each represents a time when the component was used. Within each of the beach marks are other similarly crescent-shaped marks called striations. Striations can only be seen with a microscope and each represents an increase in the crack’s length. 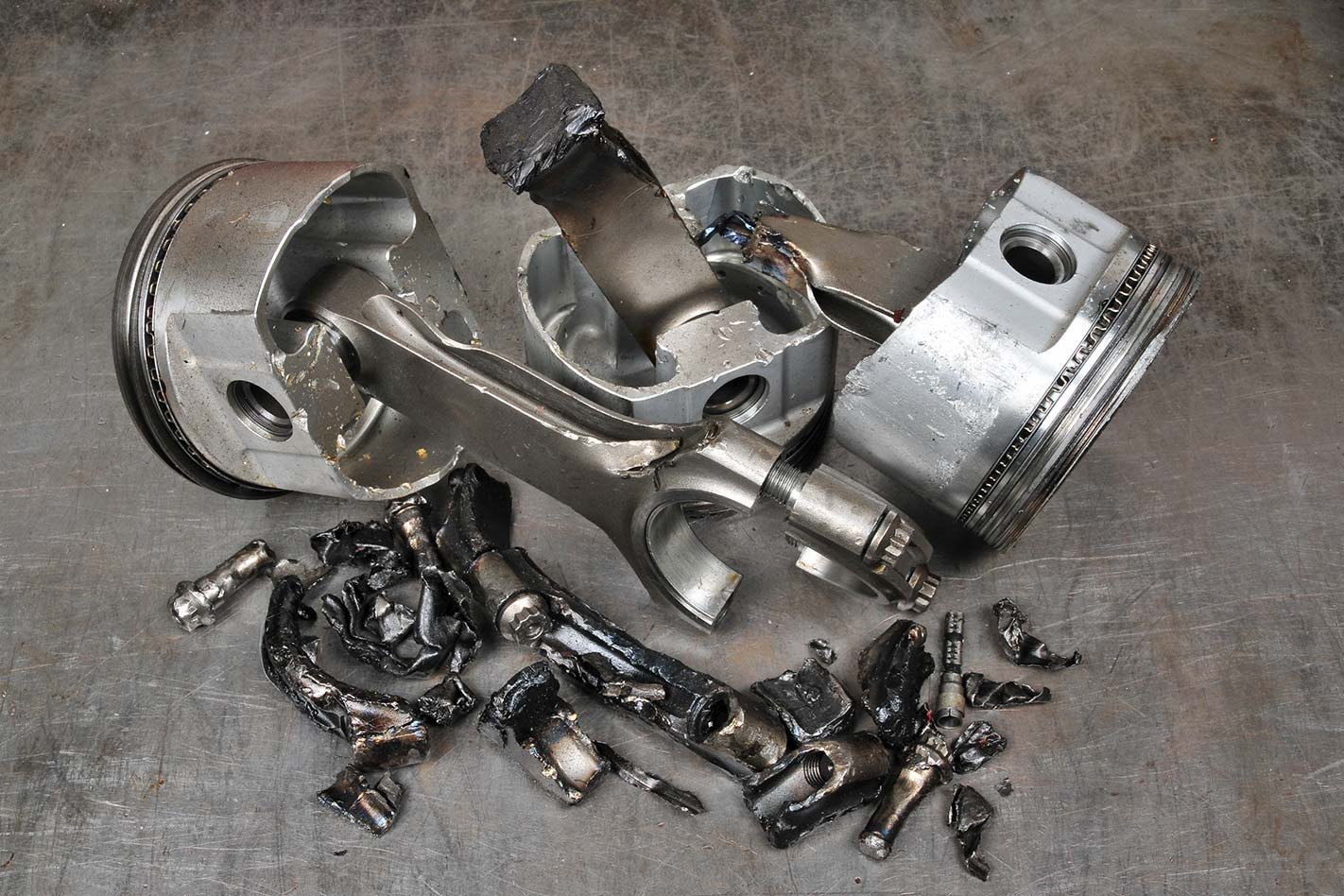 “It made a funny noise, I kept going for a lap or two, the noise stopped and I didn’t hear anything else,” the owner of this Holden V8 said. The cause? Low oil pressure due to a lack of oil

COMPONENTS that break virtually instantly are usually affected by an extremely high instantaneous load, such as an impact. This is typically as result of a catastrophic failure in another component. The term for a sudden breakage is brittle fracture — here the surface area of the break will appear crystalline or granular, with no beach marks. If a component exhibits brittle failure, you probably need to keep looking for the initial cause.

One thing to note is that the sudden final stage of a fatigue failure is also brittle, so in addition to the beach marks described, a fatigue failure will show a comparatively small granular area of brittle fracture.

In addition to structural imperfections, the basic characteristics of a material can make it more or less susceptible to fatigue failure. Grey cast iron, for instance, contains comparatively soft thin flakes of graphite, which act like internal cracks.

Nodular cast iron contains round nodules of graphite that don’t have the same weakening effect as flakes, making it tougher.

AUSCRANK explained that the noses on crankshafts often fail because of cyclic stresses fed into the system by poorly aligned belts, pulleys and balancers. Also, stress risers created by timing gears pushed hard against the fillet between the nose and the step-up for the seal area are a common cause of crankshaft nose breakages. Brett from Auscrank explained that quality performance cranks made for particular applications are about the toughest components in engines and almost never simply break in isolation: “Usually something else lets go and causes a problem,” he says.

Incorrect clearance is a common cause of component breakage. Pistons, for instance, expand when hot and if bore clearances are extremely tight, breakages can result. At the very least severe scuffing will occur.

Incorrect ring end gaps are another reason for piston or ring breakages. If the gaps are too small, the ends of the rings butt together when they expand in operation, jamming against the bores and distorting or breaking ring lands.

Poor ring sealing allows oil to enter the combustion chamber, where it lowers the octane rating of the air/fuel charge and contributes to detonation. Poor tuning als results in detonation. Regardless of the cause, detonation is extremely destructive — especially to pistons. The pressure spike and concentrated heat release of a detonating charge can break rings and ring lands, distort pistons or even punch holes clean through them!

Detonation is a particular problem in turbocharged engines that have had the dishes in the piston crowns machined out to reduce the compression. The thinner the crown, the more susceptible it is. 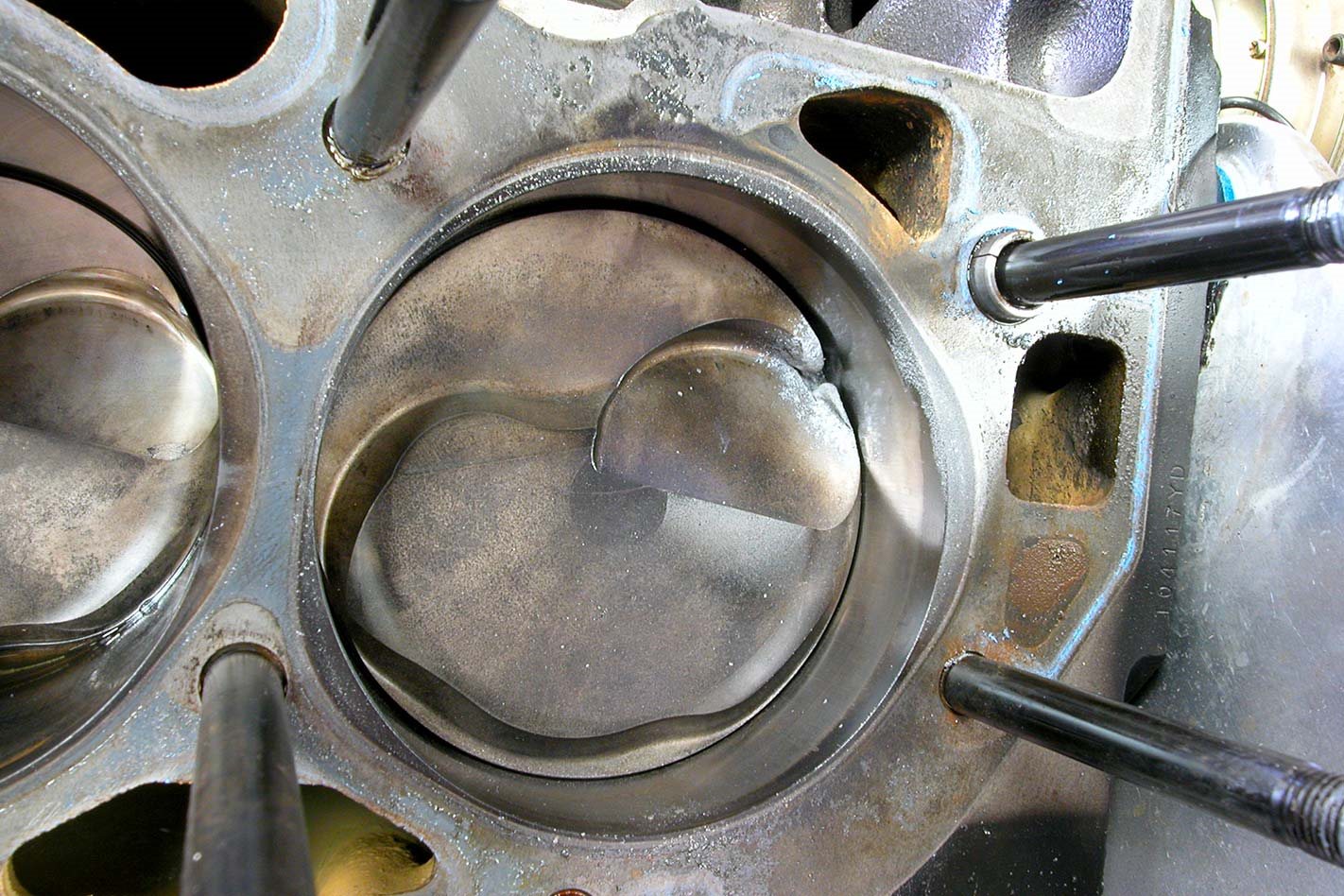 The discoloured sharp edge on this valve relief is a typical hot spot and source of detonation. The heat build-up became severe enough to melt the hot area and create a crack in the fillet of the relief

BREAKDOWN of the lubrication film between bore and piston is also a cause of scuffing and failure. This can occur for many reasons, including low oil level, blocked squirt holes on rods, incorrect clearances and scuffing damage prior to absolute failure.

Scuffing is actually localised and instantaneous welding between piston and bore. These tiny welds break as quickly as they’re made, tearing the piston skirt and compounding the original oil film problem.

Oil control problems can also cause fretting and scuffing of the gudgeon pin. This can in turn lead to cracking and catastrophic failure. Free-floating gudgeon pins are best in high performance applications but these have to be retained in their pistons by means of clips at each end. If the wrong type of clip is used, or if the clips are incorrectly fitted, they can pop out of their grooves, leading to cylinder wall damage at best and complete piston failure at worst.

Naturally, oiling problems lead to bearing problems. Ian Shugg from Auscrank points out that bearings are about 1.5mm thick — 1mm of steel backing shell and 0.5mm of actual bearing material. Depending on the composition of the bearing material, it can develop cracks or pock marks. Either can cause it to come away from the backing shell, leading to contact between the bearing journal and the steel backing. Nothing good comes from this.

Then there’s just plain oil starvation, leading to overheating and spun bearings. If the supply of oil to the rod is interrupted for even the briefest period during high power operation, heat will build up and failure will occur.

Plastic deformation occurs more readily at high temperature, and over-revving an engine may stretch a rod or cause the ends of a big-end bearing to bow inwards slightly. In this state, the bearing shell acts as a scraper and can remove all the oil from the surface of a journal, with catastrophic consequences. This is why a high-performance sump is essential in a high-performance engine.

There are 100s of reasons why specific parts fail but this should give you some insight into why shit breaks.

TRACING the causes of component failures is as fascinating as it is involved.

Frank from Dandy Engines said this alloy engine (below) rotated freely but when it turned over, it sounded like it was either down on compression, or had the ’plugs out. 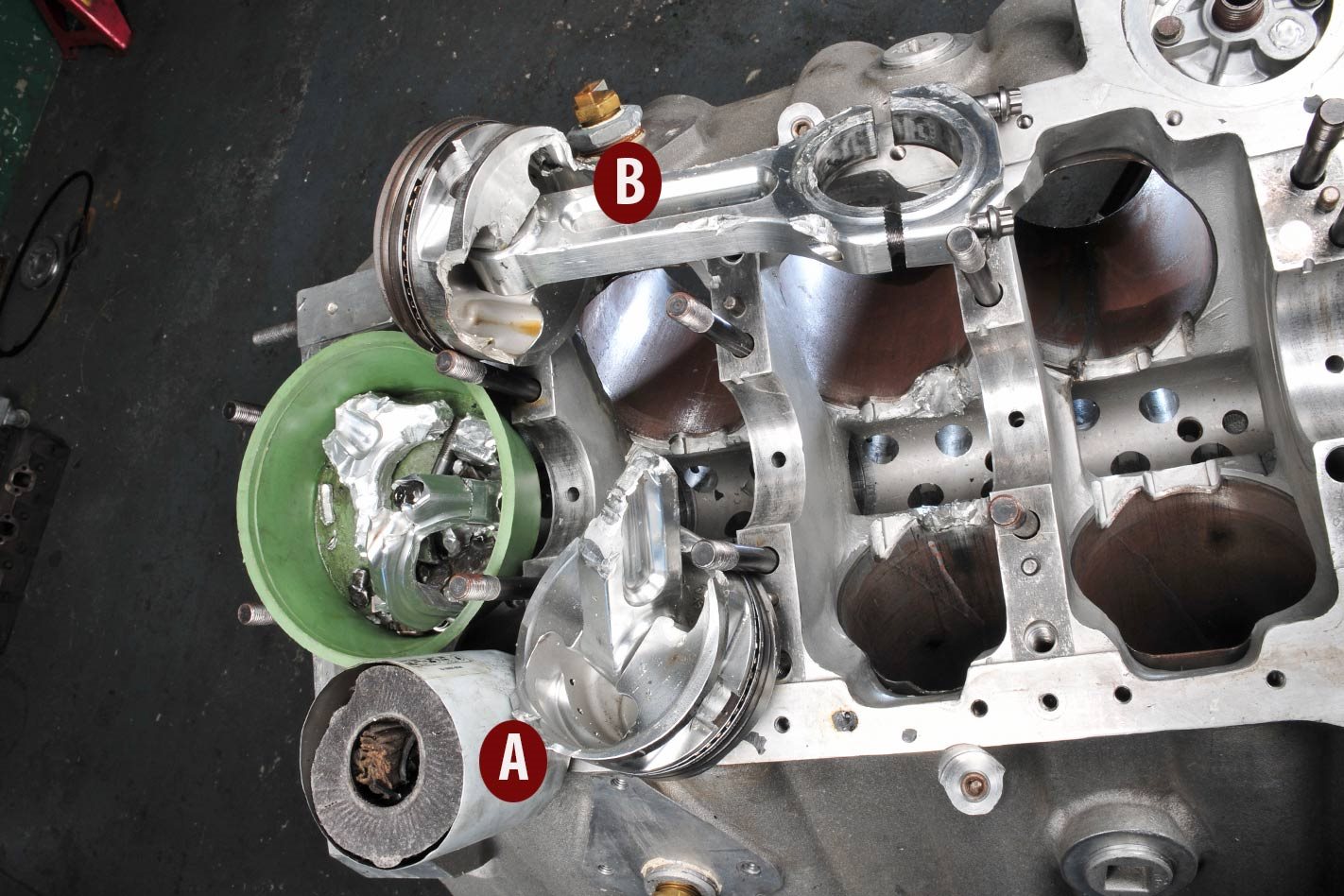 On opening it, they found that a rod had been starved of oil, destroying the rod and the piston (A) as well as damaging the other rod on the same journal (B). You can tell this by the heat marks on the journals (C, below). 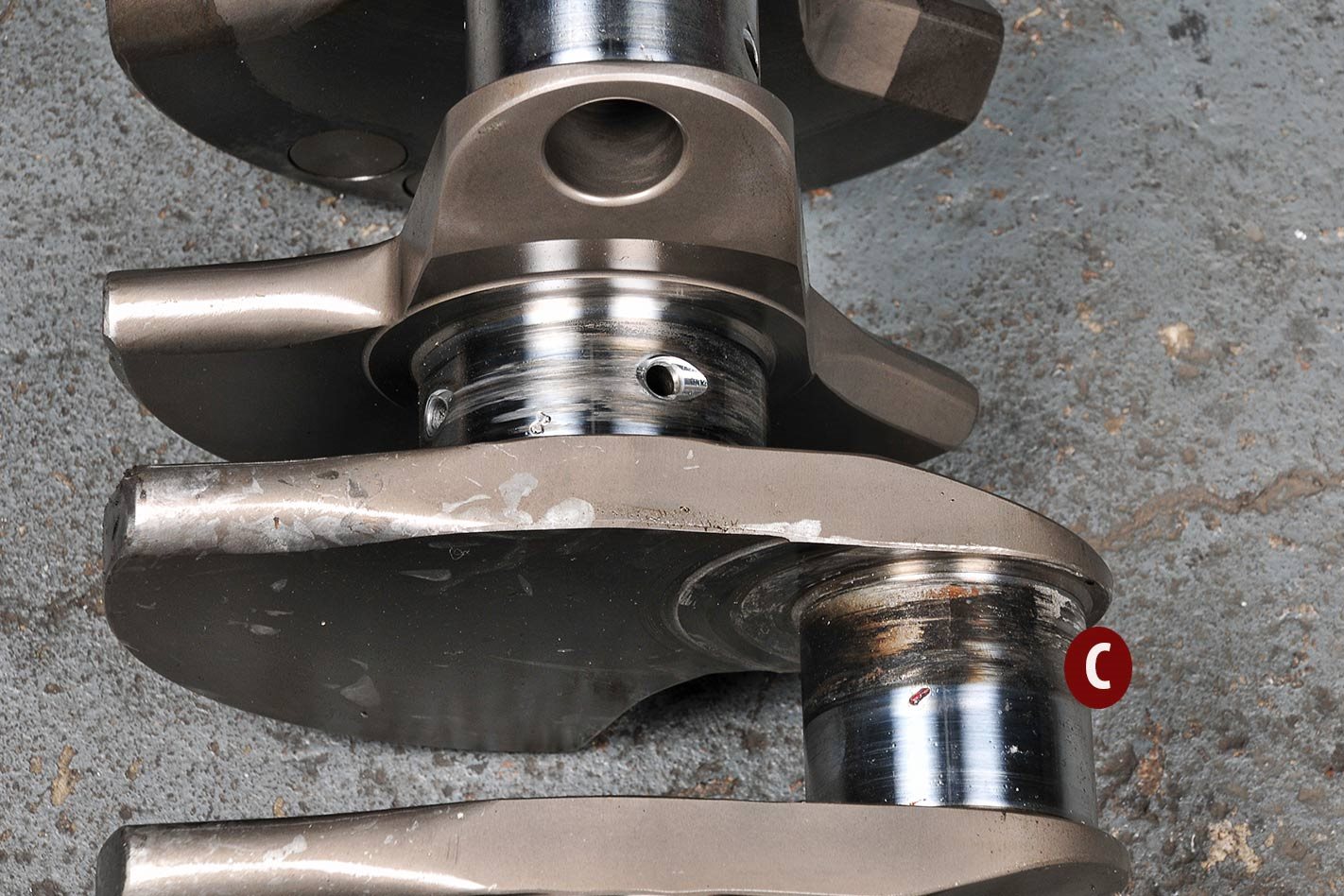 It didn’t stop there — the busted piston jammed in the top of the bore, where it was hit by a valve, stopping the cam (while the crank was still rotating), which tore the teeth off the Jessel timing belt. 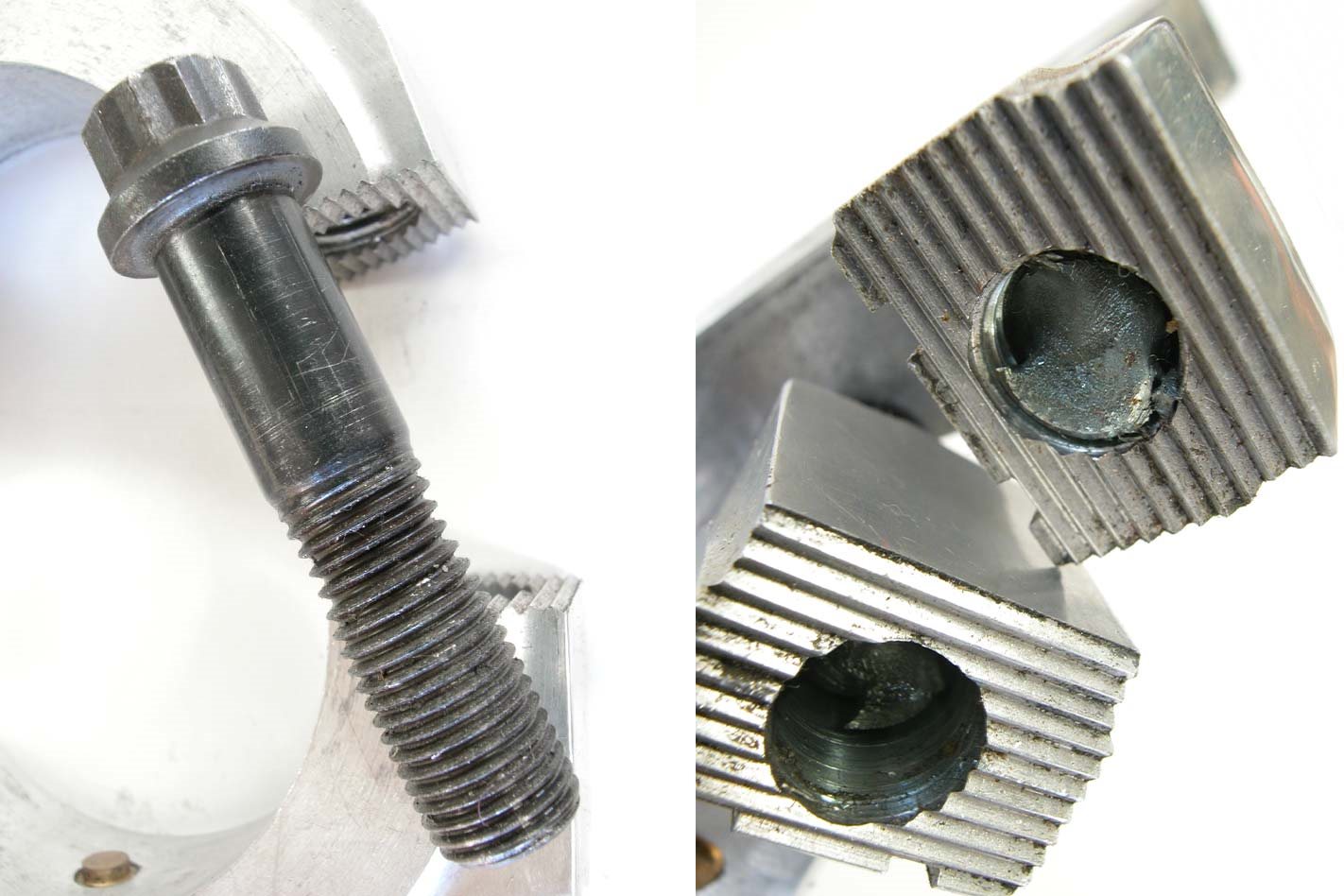 1. The rod bolt we shot at Ridgecrest is a prime example of necking. All that saved it is that the other bolt (far right) broke first. 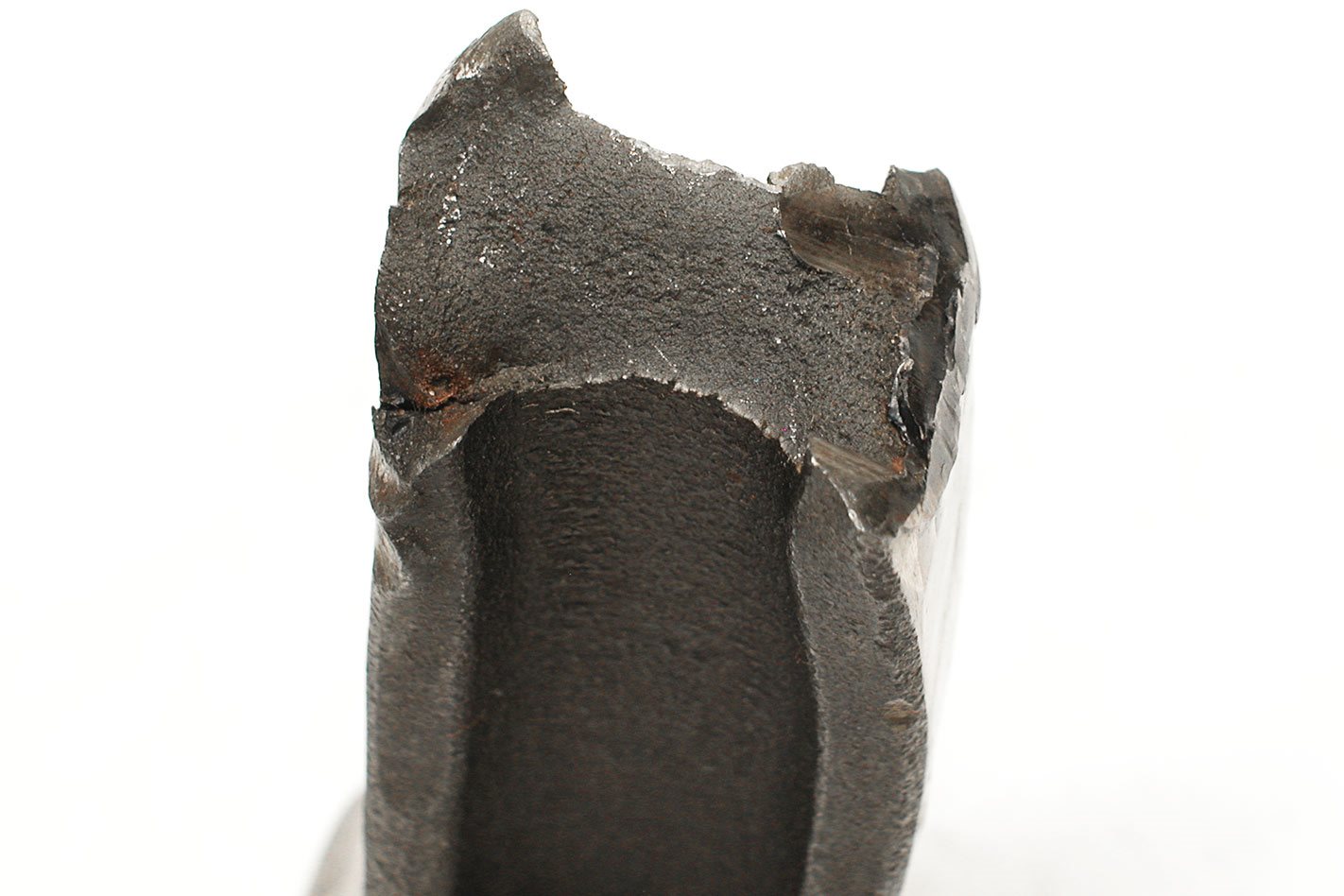 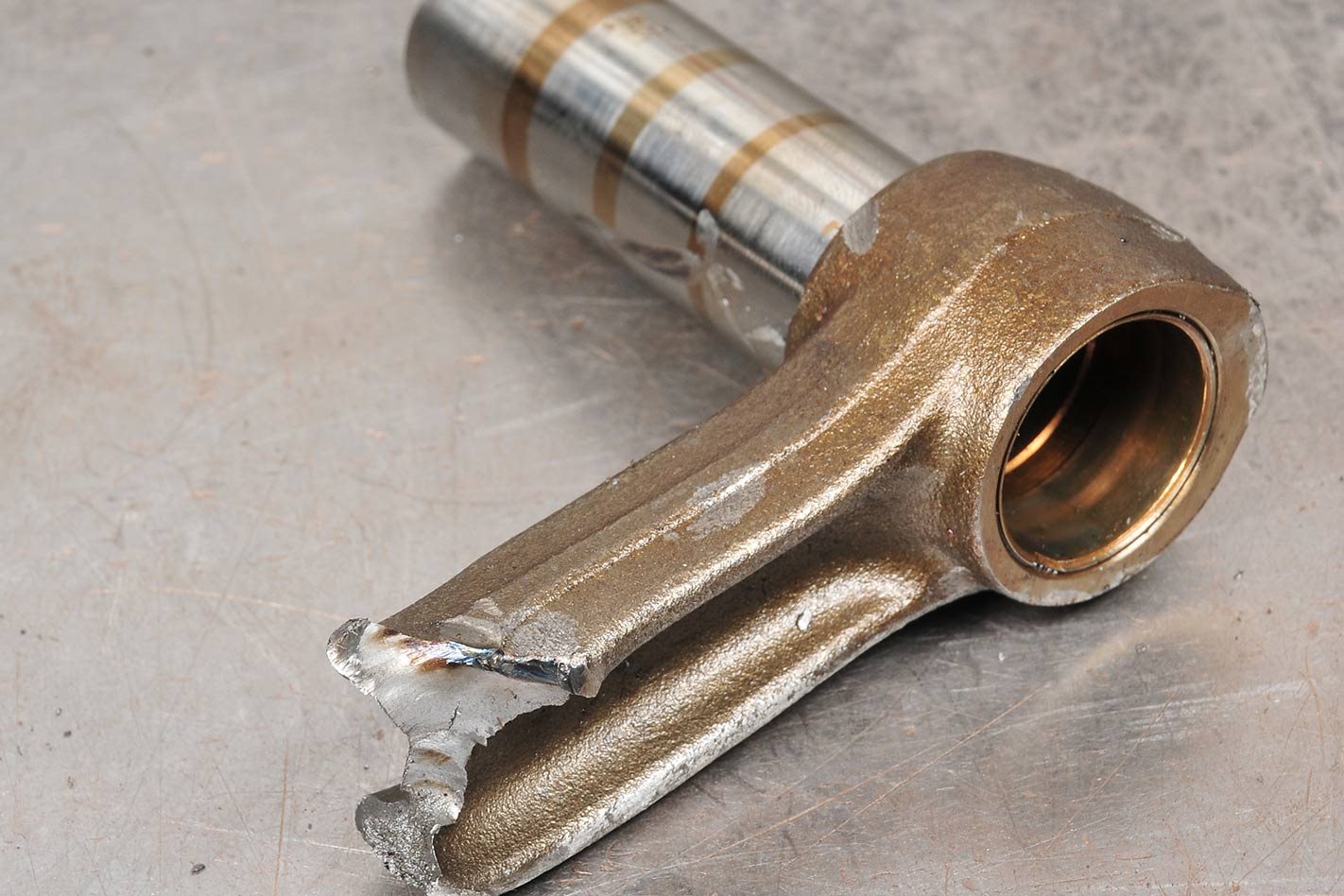 3. This rod shows beach marks from early-stage fatigue cracking and then a crystalline final failure. This indicates that it almost certainly had a crack in it. It’s part of the collection at Pitstop Performance. 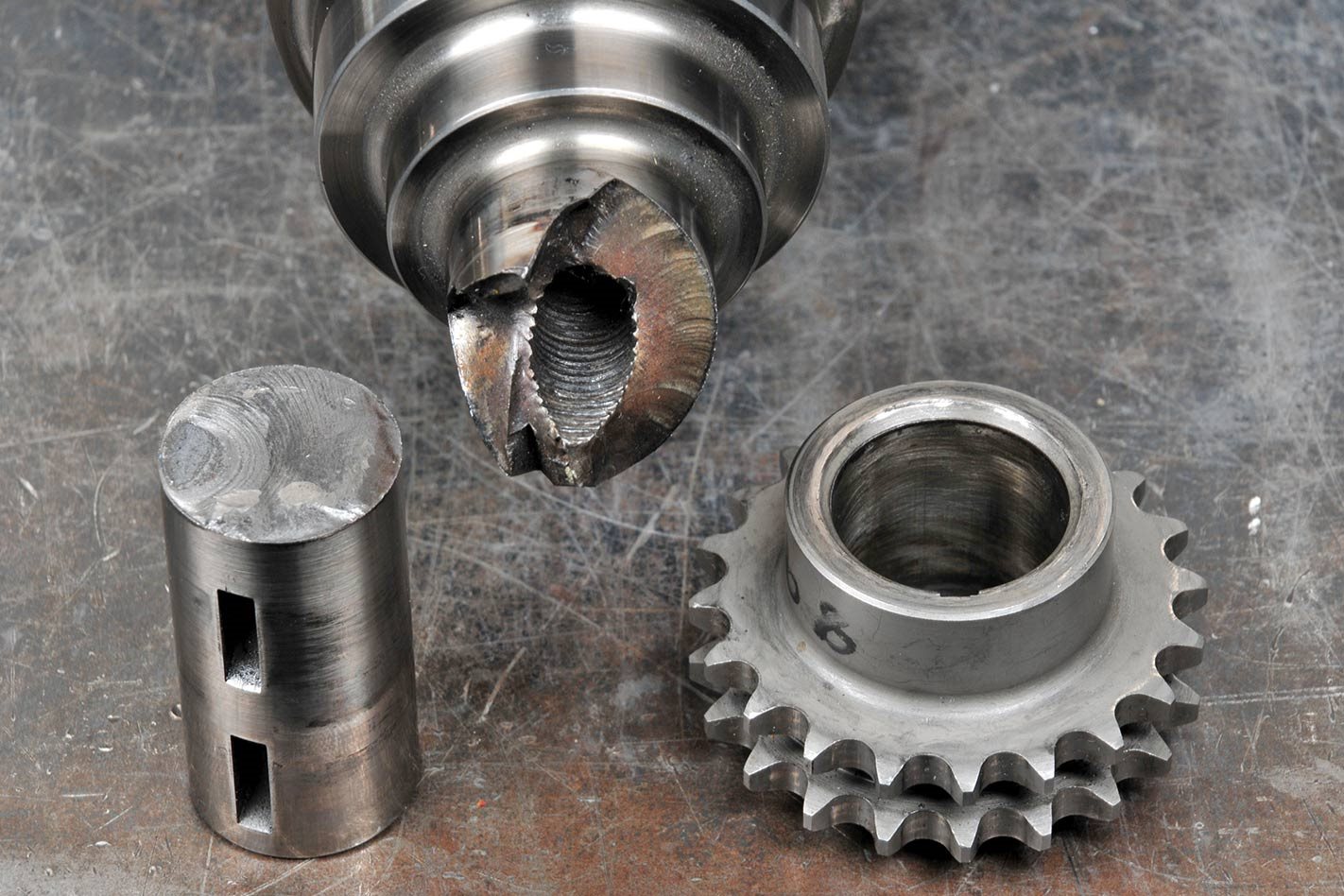 4. The broken nose (left) perfectly demonstrates beach marks due to fatigue. The timing gear at right exhibits bright marks where it’s been pushed up hard against the fillet, creating a stress-riser. The middle failure is typical of those caused by harmonic balancers. 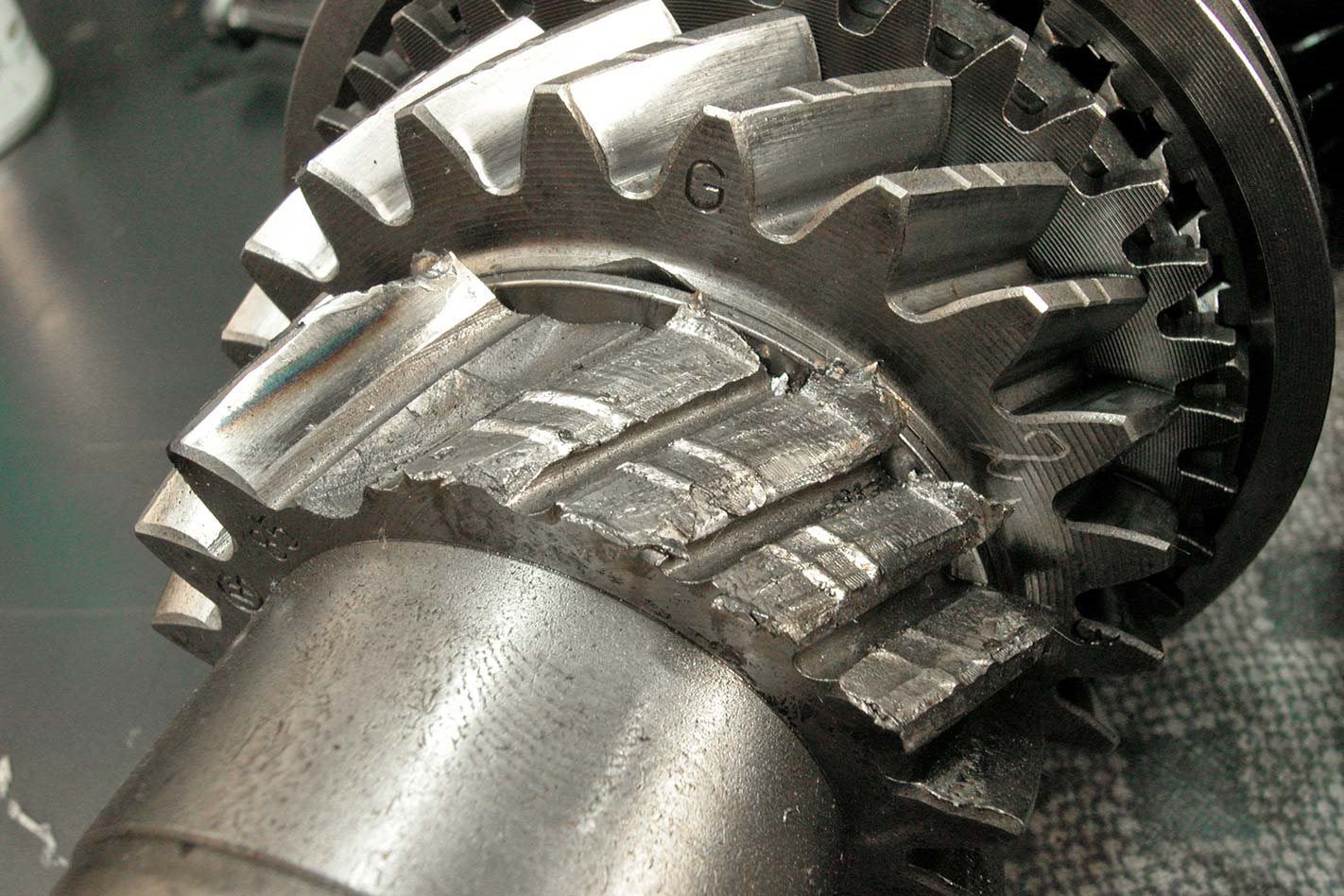 6. While power can be hell for driveline parts, torque is the real killer. The torn teeth on this transmission gear-set are typical of failures seen in the lower gears, where torque multiplication is at its greatest. 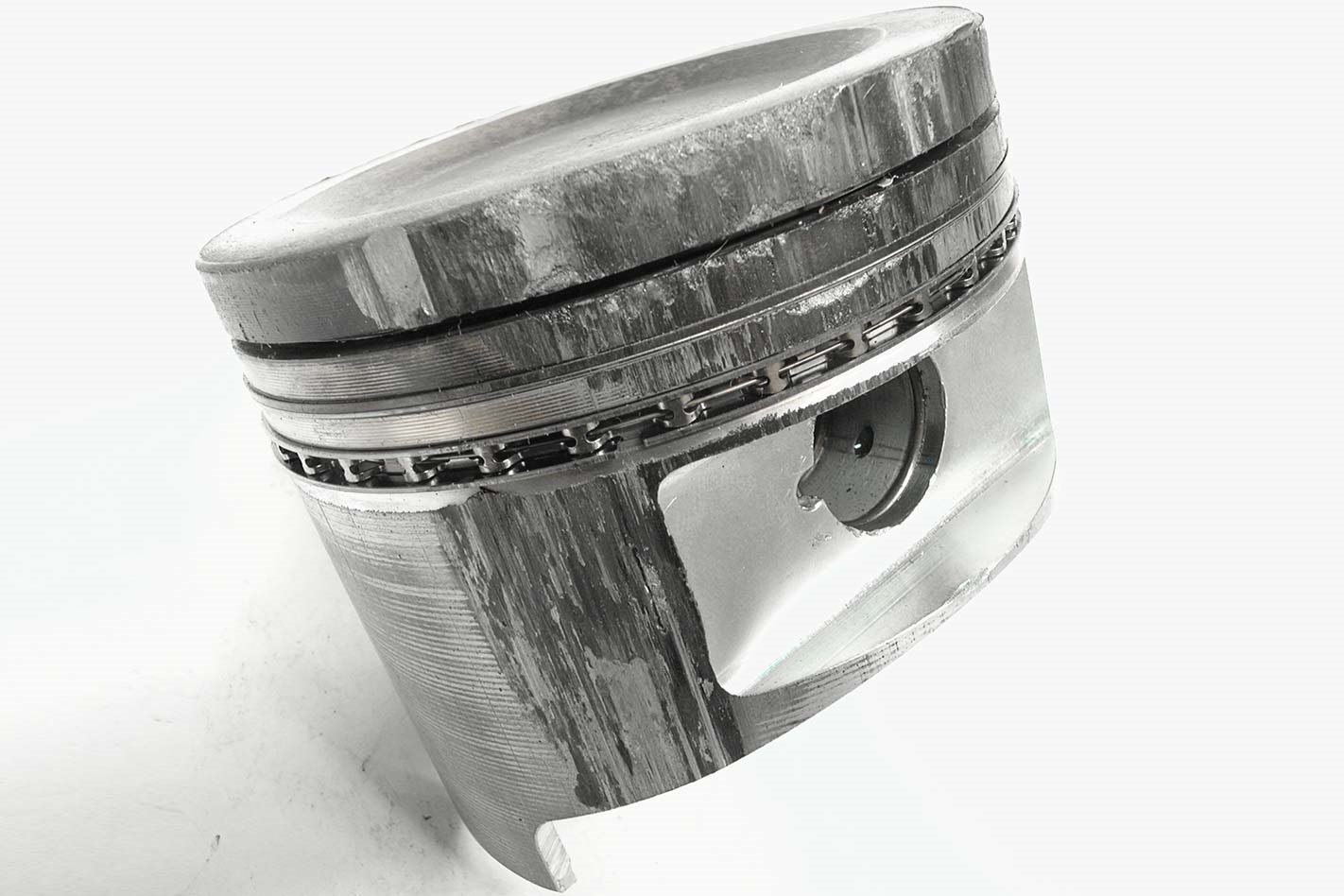 7. Severe overheating has distorted the ring grooves (affecting sealing) and also caused the side scuffing due to expansion — breakage was not far away. 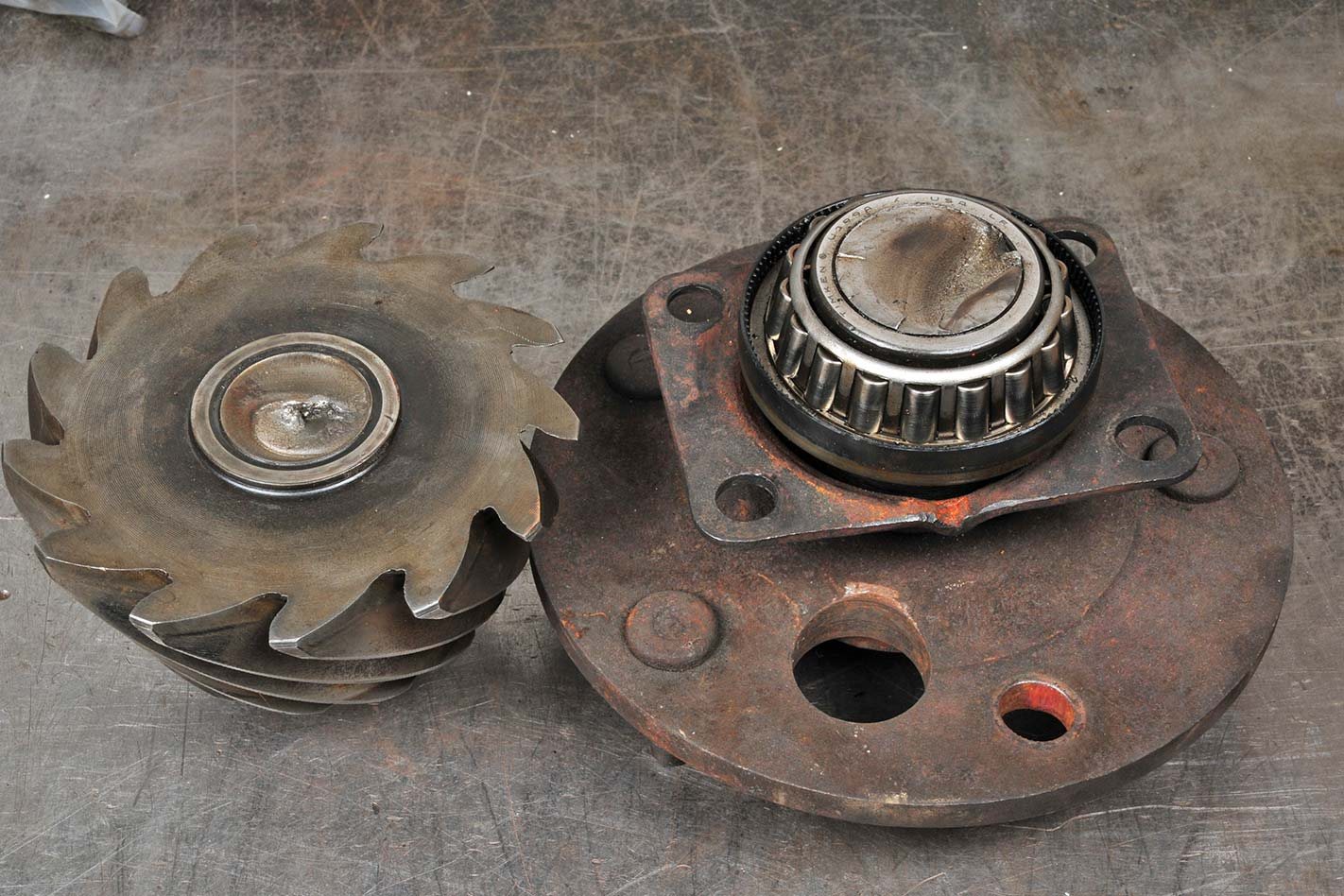 8. This rare failure is a result of the radical change in cross-section between the pinion’s shaft and helical gear section. Nine-inch axles often fail at the bearing, because it’s the first point where the axle can flex. 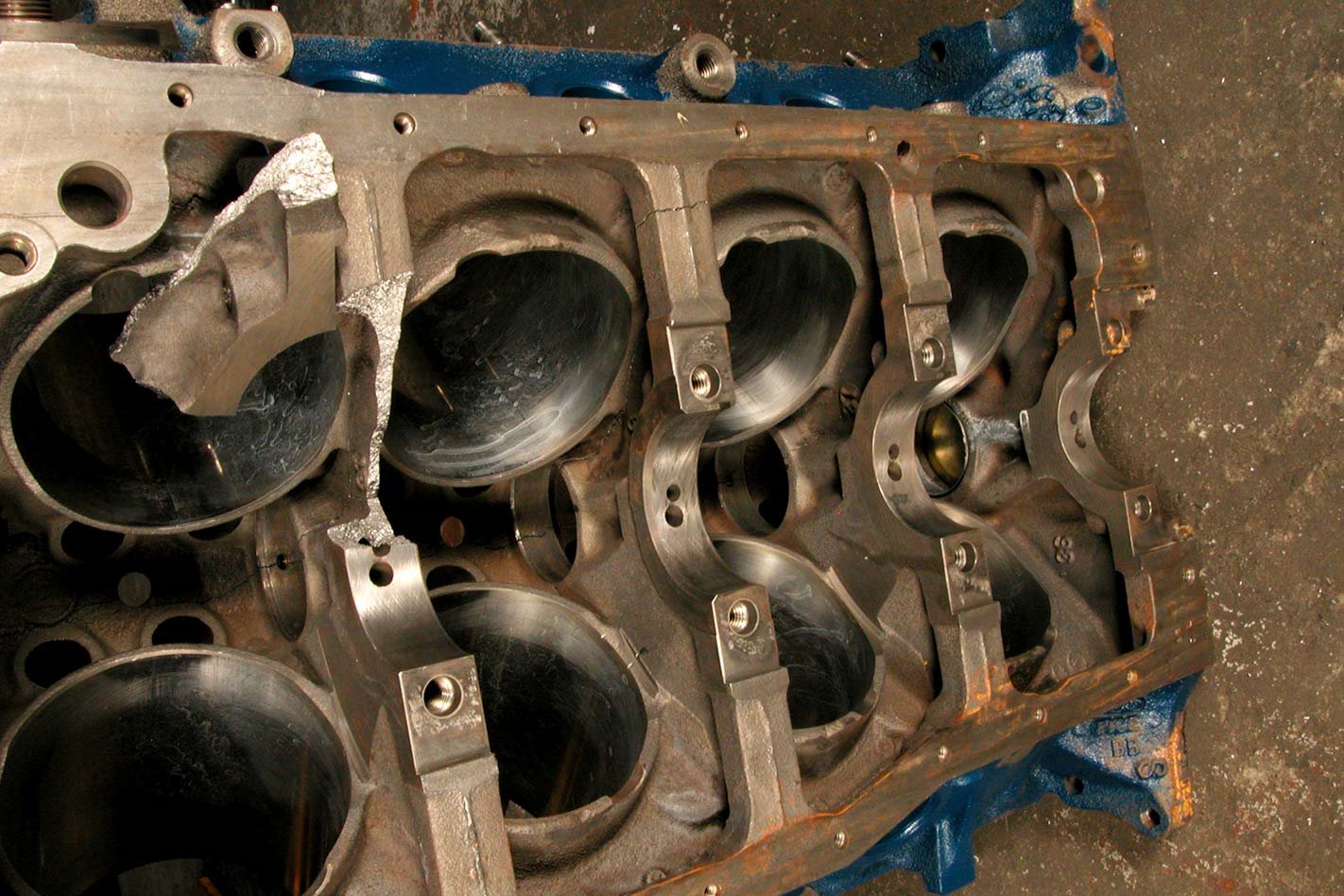 9. This Windsor block has found its limit. A Dart wouldn’t have failed in this application. Considering the relatively low cost of an aftermarket block, why would you use a factory item? 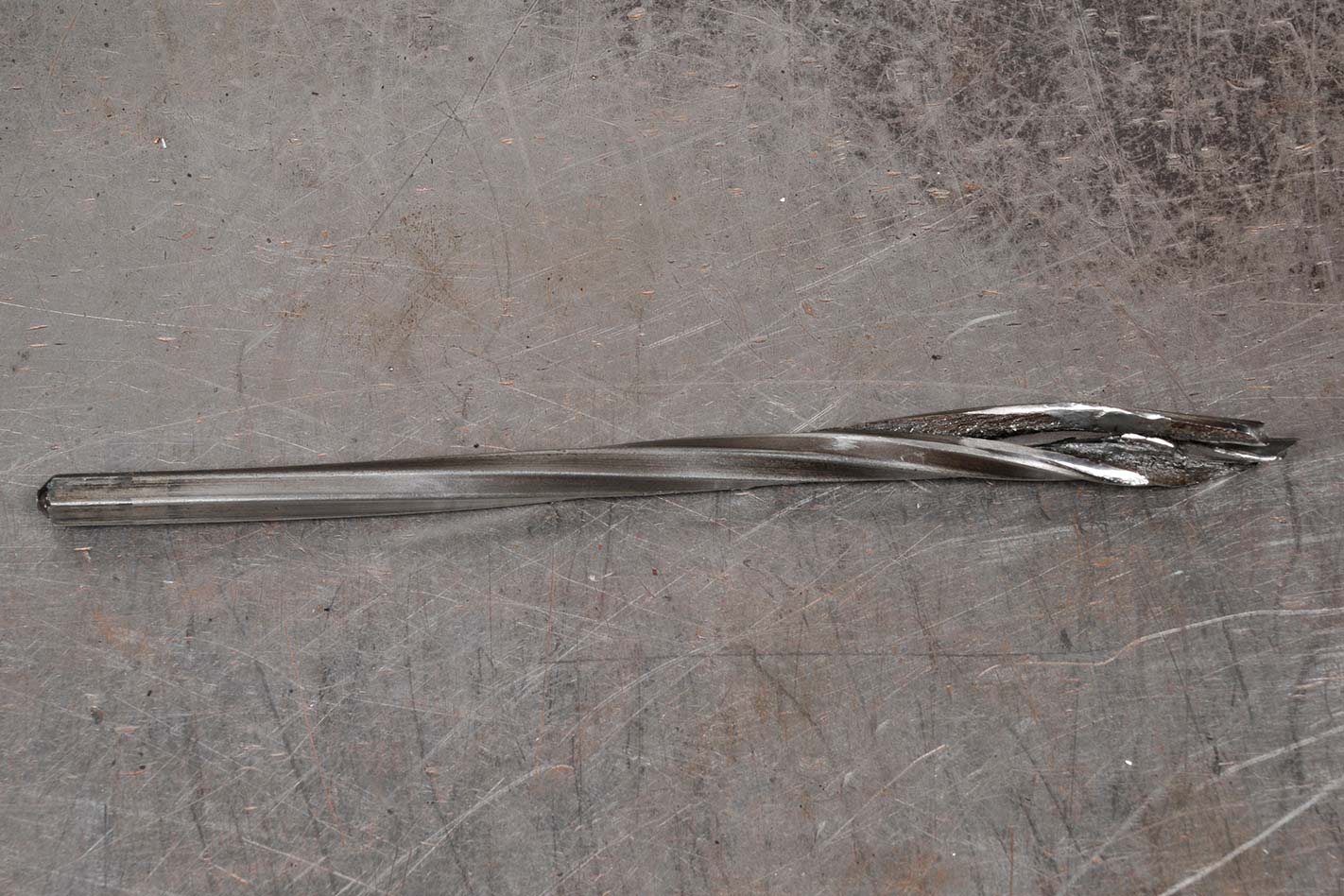 10. Here’s why you should not use a standard oil pump drive with a high-volume oil pump. 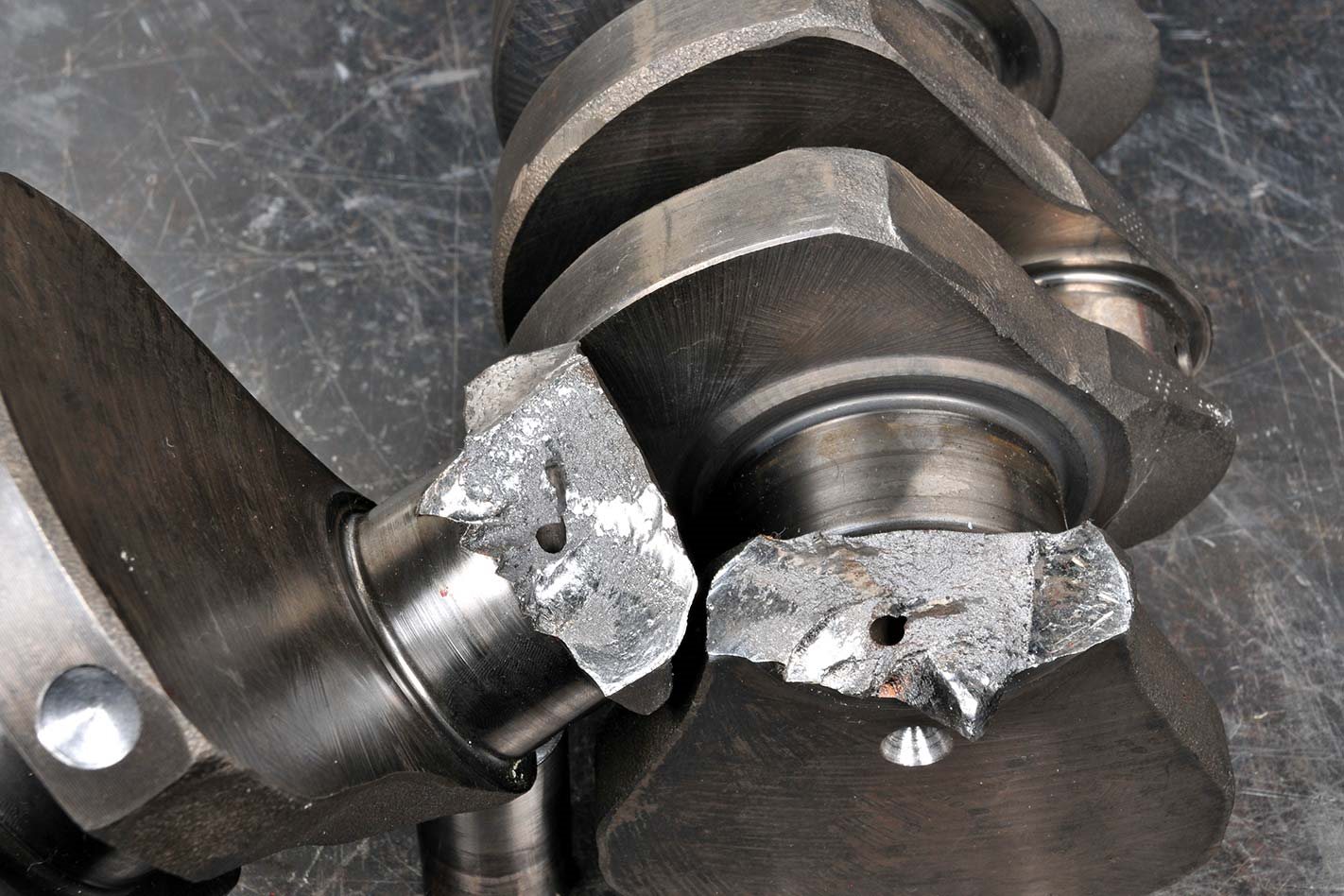 11. Granular surface and lack of heat residue indicates this was not a bearing-related failure — rather a result of a sudden impact, like a jammed piston. Being the back of the crank, it could also have been caused by the whip of a broken tailshaft. 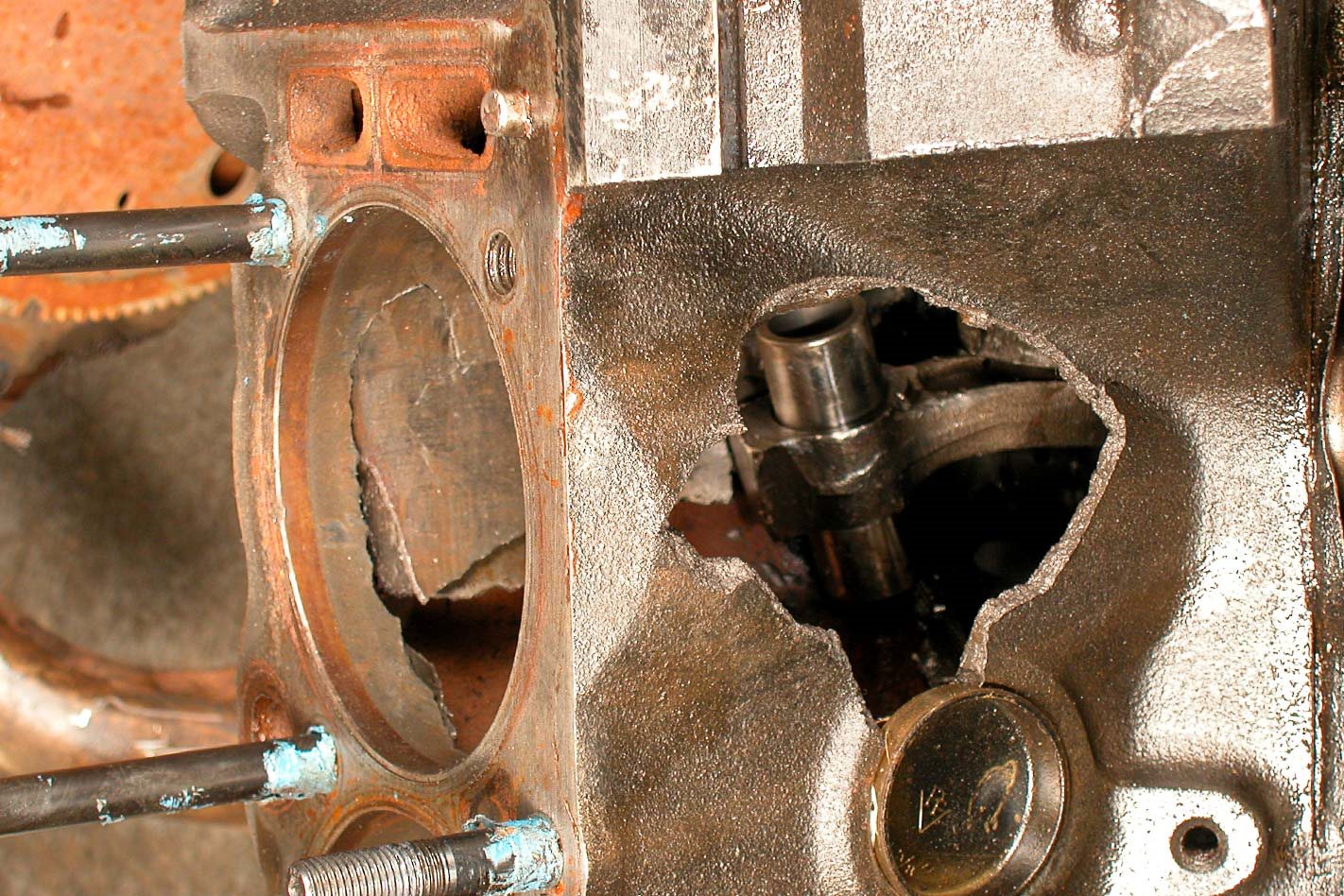 12. Breakages are less common nowadays as there are so many reasonably priced performance components available. Pushing factory components too hard was the root of many failures in the past. This factory block found its limit at around 600hp. 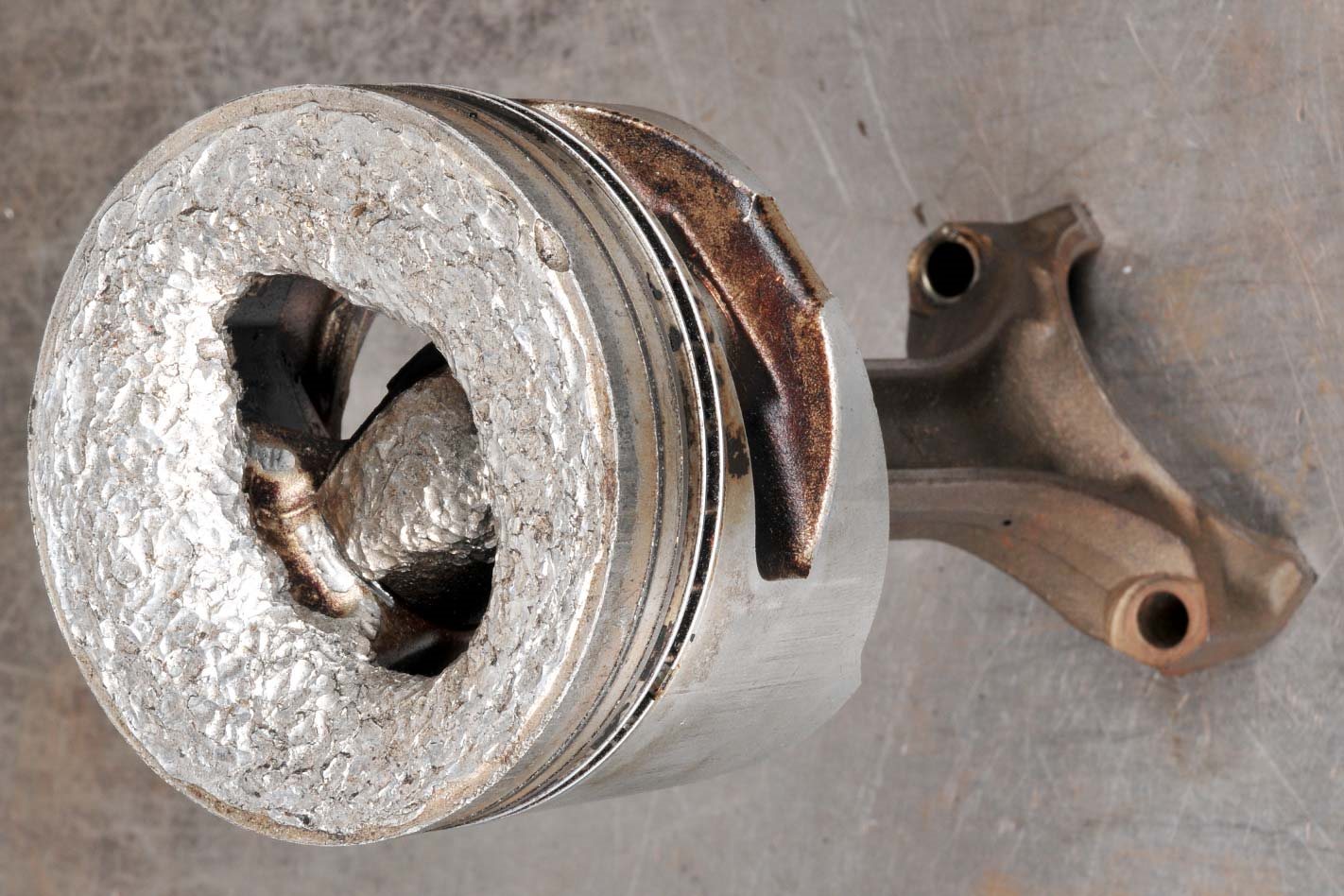 13. Broken valve springs often lead to catastrophic failures as they allow the valves to contact the pistons. The staggering thing about this failure is that the engine must have kept going for quite some time!

All the businesses that supplied info and busted components wish to make it clear that they didn't build the engines that failed - they fixed 'em!