LEGENDARY British house and techno DJ/producer Carl Cox has been spinning the wheels of steel for 40-odd years. And while his day job still takes him all over the world, these days he calls Australia home, where he indulges his other great love: racing fast cars and bikes. 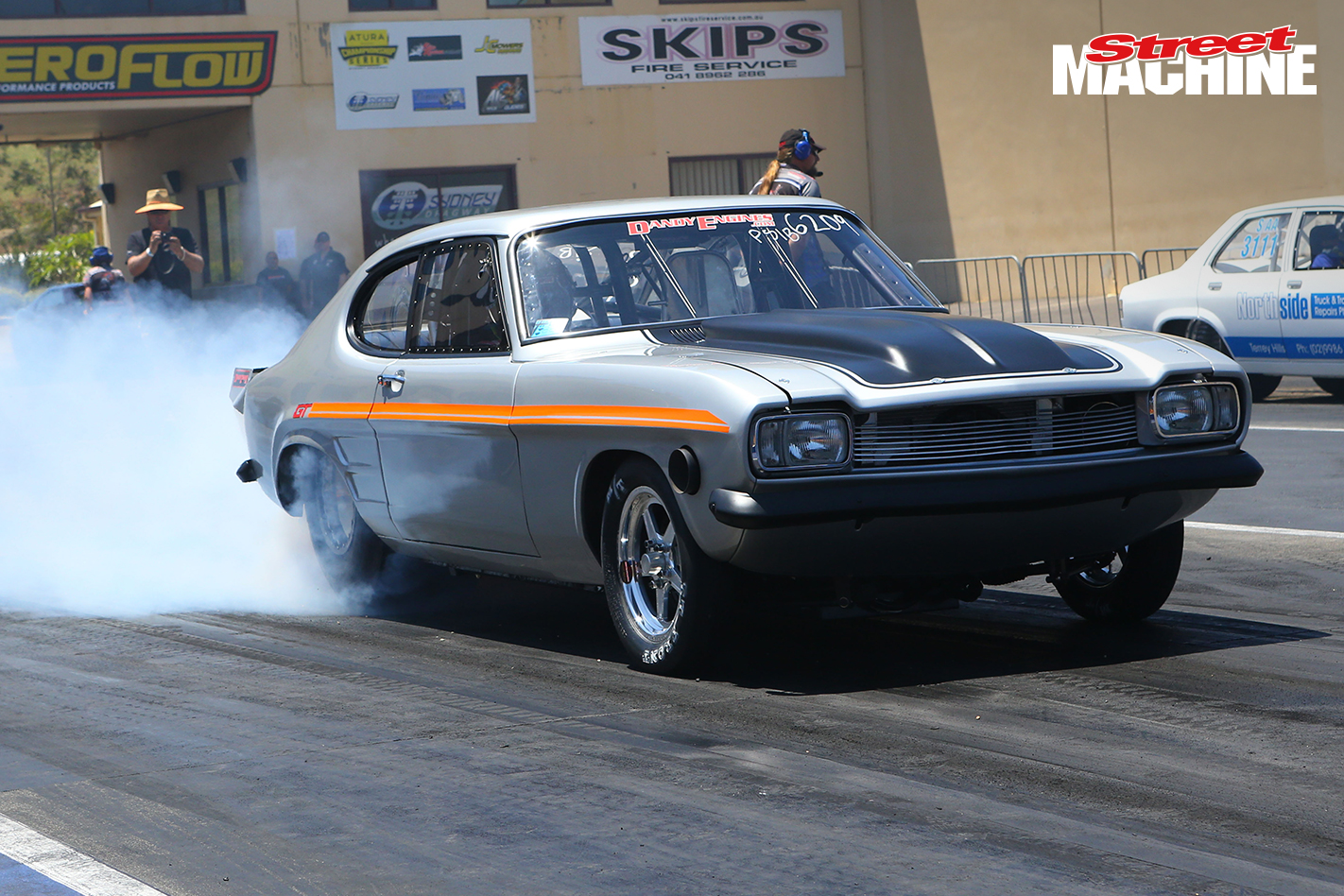 Carl’s ’69 Ford Capri drag car is powered by a single-turbo 420ci small-block Ford, built and tuned by Frank Marchese from Dandy Engines in Victoria (Mill Of The Month, SM, Sep ’16). The monster mill is backed up by a Powerglide and a full-floating nine-inch. 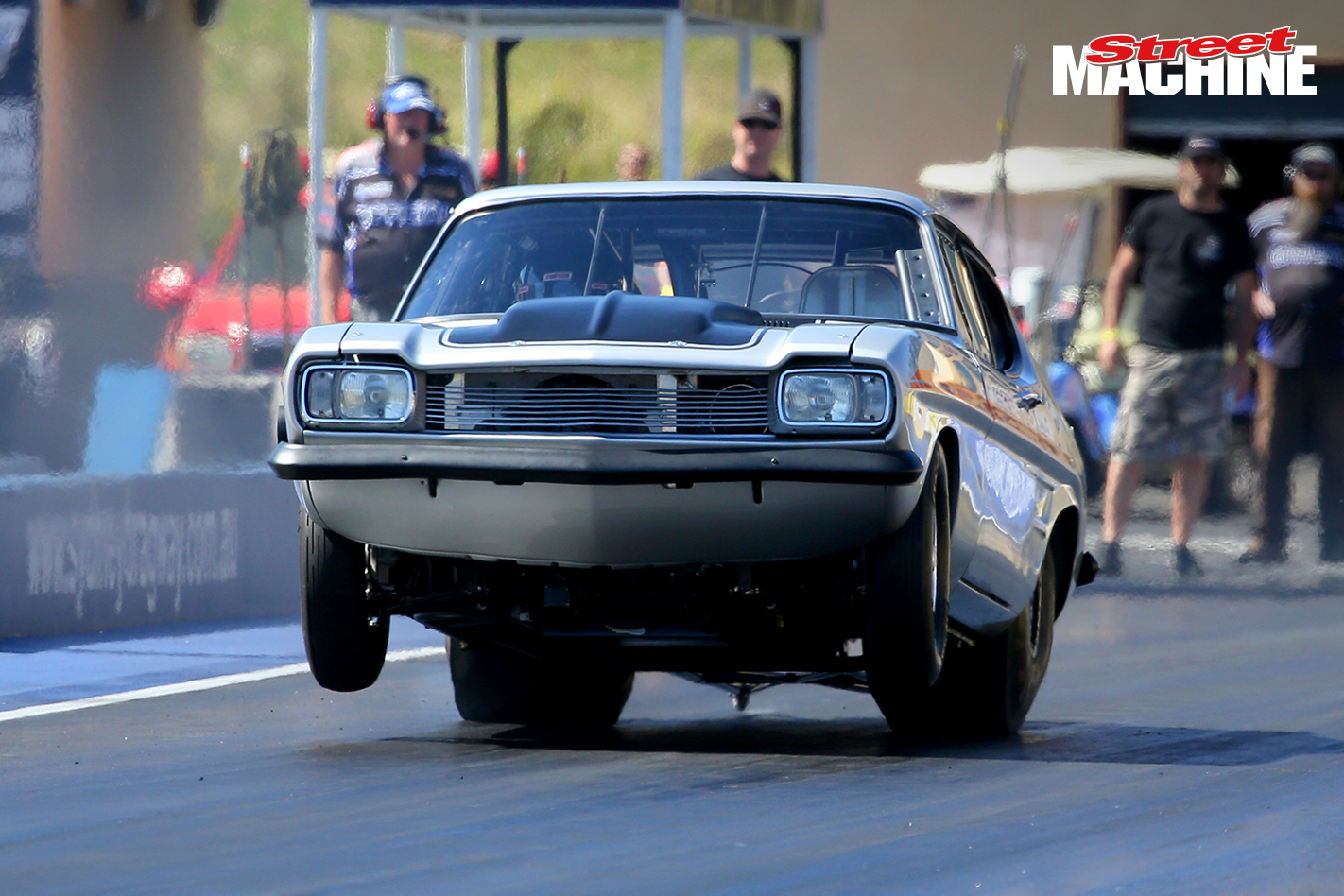 In his first event since getting his drag-racing licence, Carl took out Pro Street Blown at the APSA Grand Finals in Sydney in November. The lightweight Capri ran a best time of 7.15@192mph, with 1.17-second 60-foot times, and is headed for the six-second zone.

How did you get into the music scene and racing?

At 15 I bought my own turntables and DJing equipment and started out doing people’s birthday parties. Then I went on to do discos around England and just did my own thing. I used to drive old cars back then to get to gigs, that’s what got me into cars to begin with. 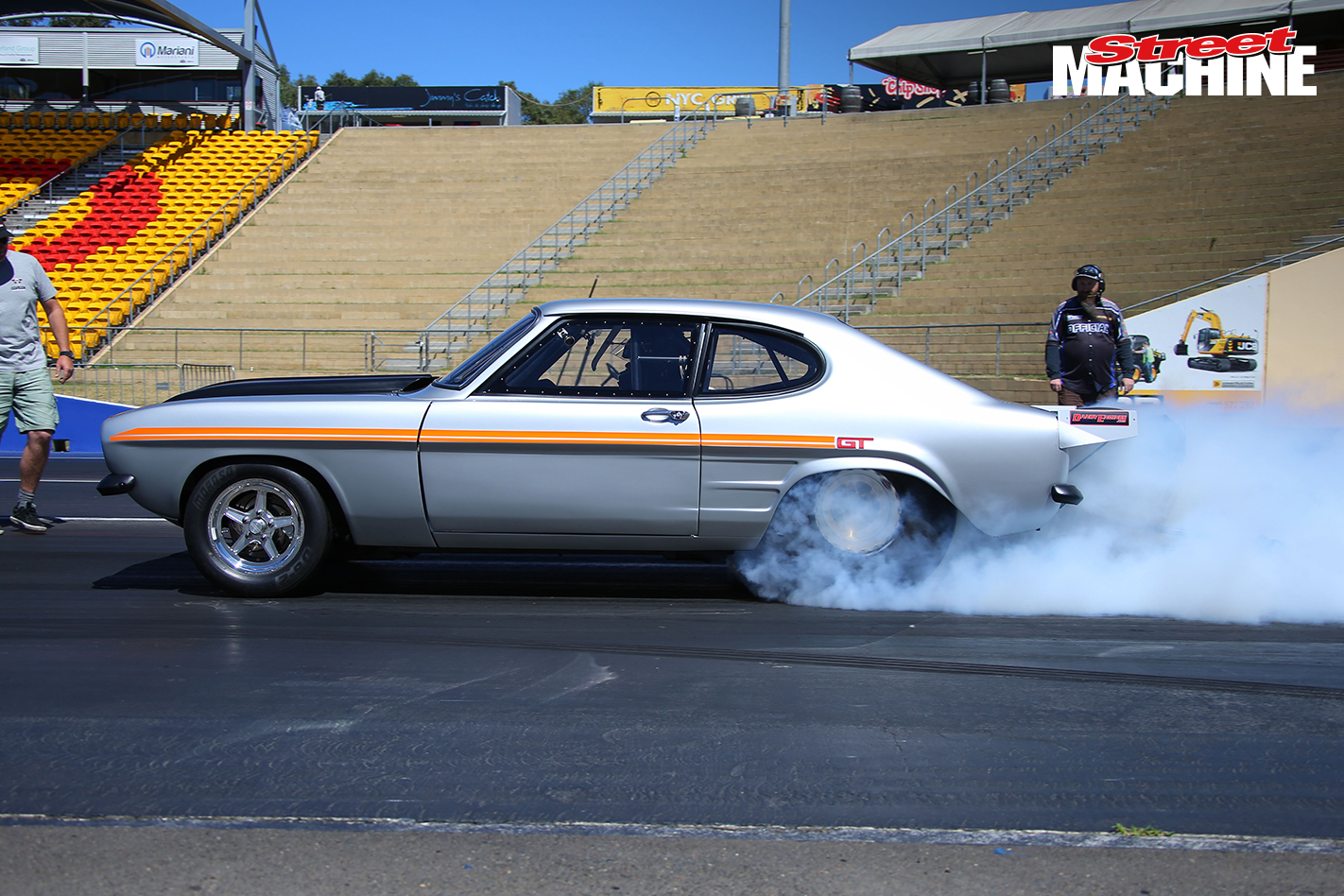 Did you start drag racing back then?

Yes, I had a V6 auto-powered Ford Capri in England in the 80s. We used to race in what they called ‘run what you brung’ [dial-your-own] drag racing. I used to build my own engines, but the car wasn’t very quick. It ran 18-second quarter-miles but would always break something; I couldn’t afford to keep doing it at the time. 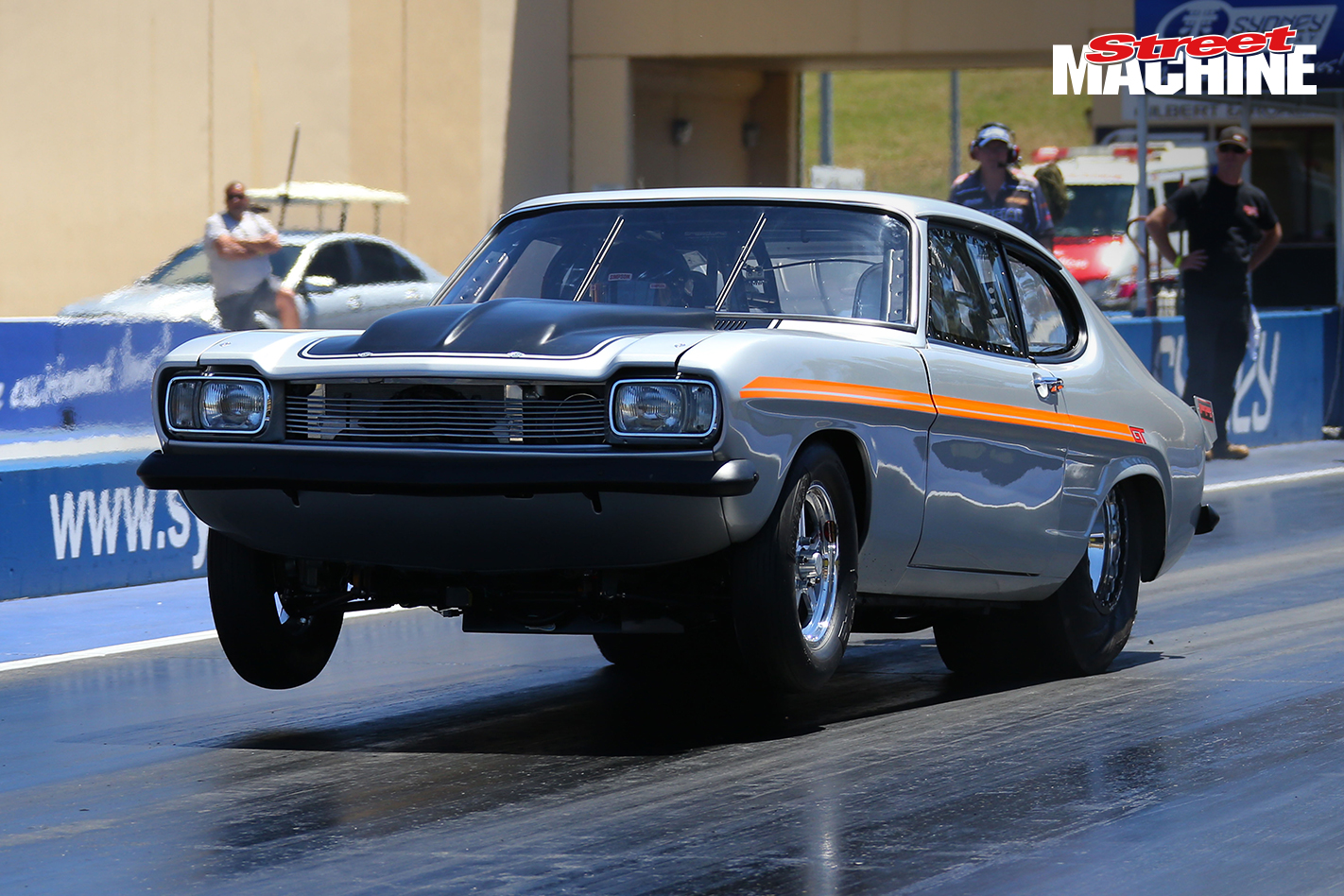 How did you end up in Australia?

I started touring here in the 90s when my song I Want You was in the charts. I really enjoyed coming to Australia, fell in love with the place. The weather’s great compared to England – Melbourne in particular. Around 2003/2004 I decided to move here as my home base. 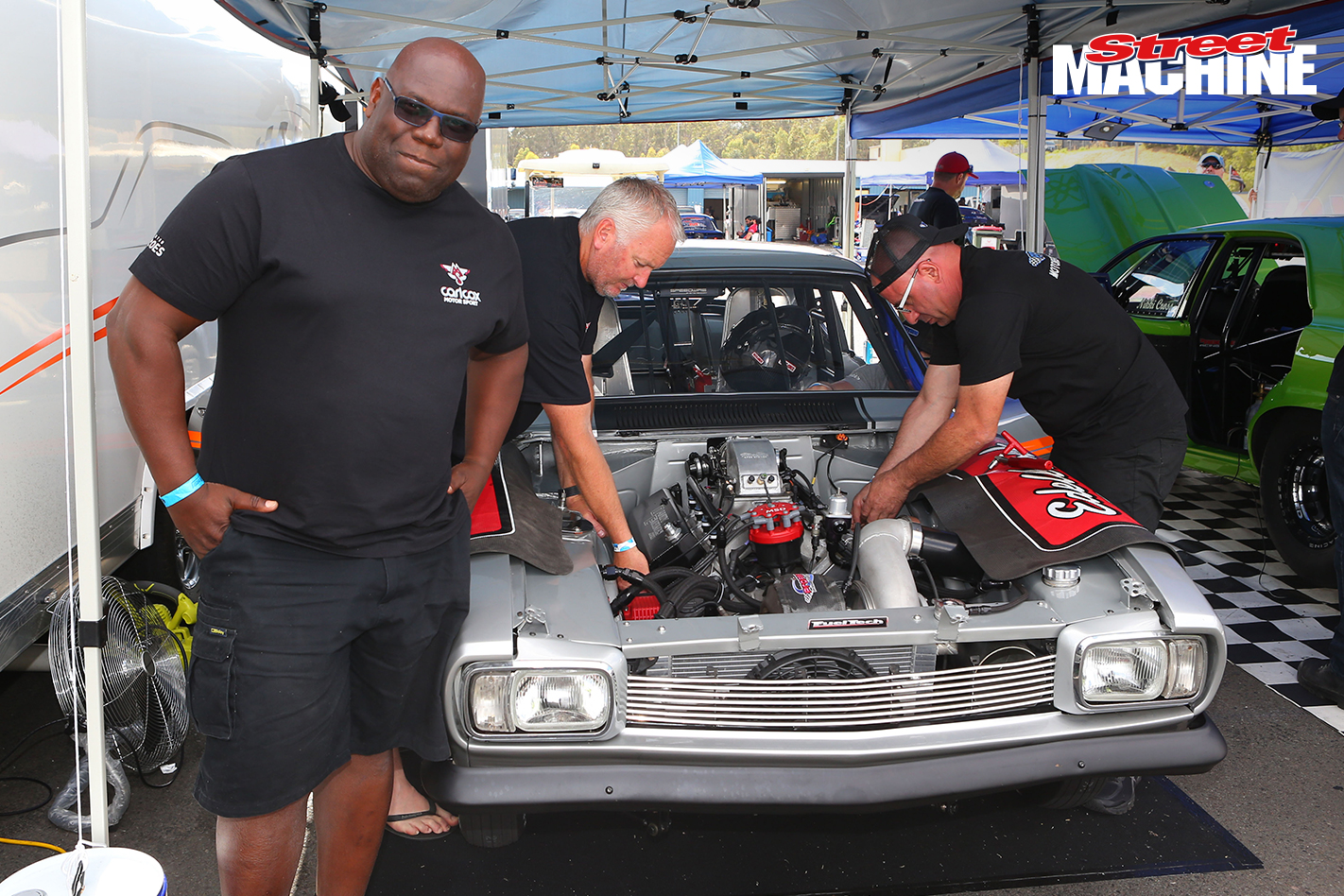 What got you into drag racing here?

Rod Taylor, my crew chief on the Capri, introduced me to the sport of Pro Street drag racing out here. I’d never seen an eight-second streeter before; it was mad and I was hooked from the moment I saw them. 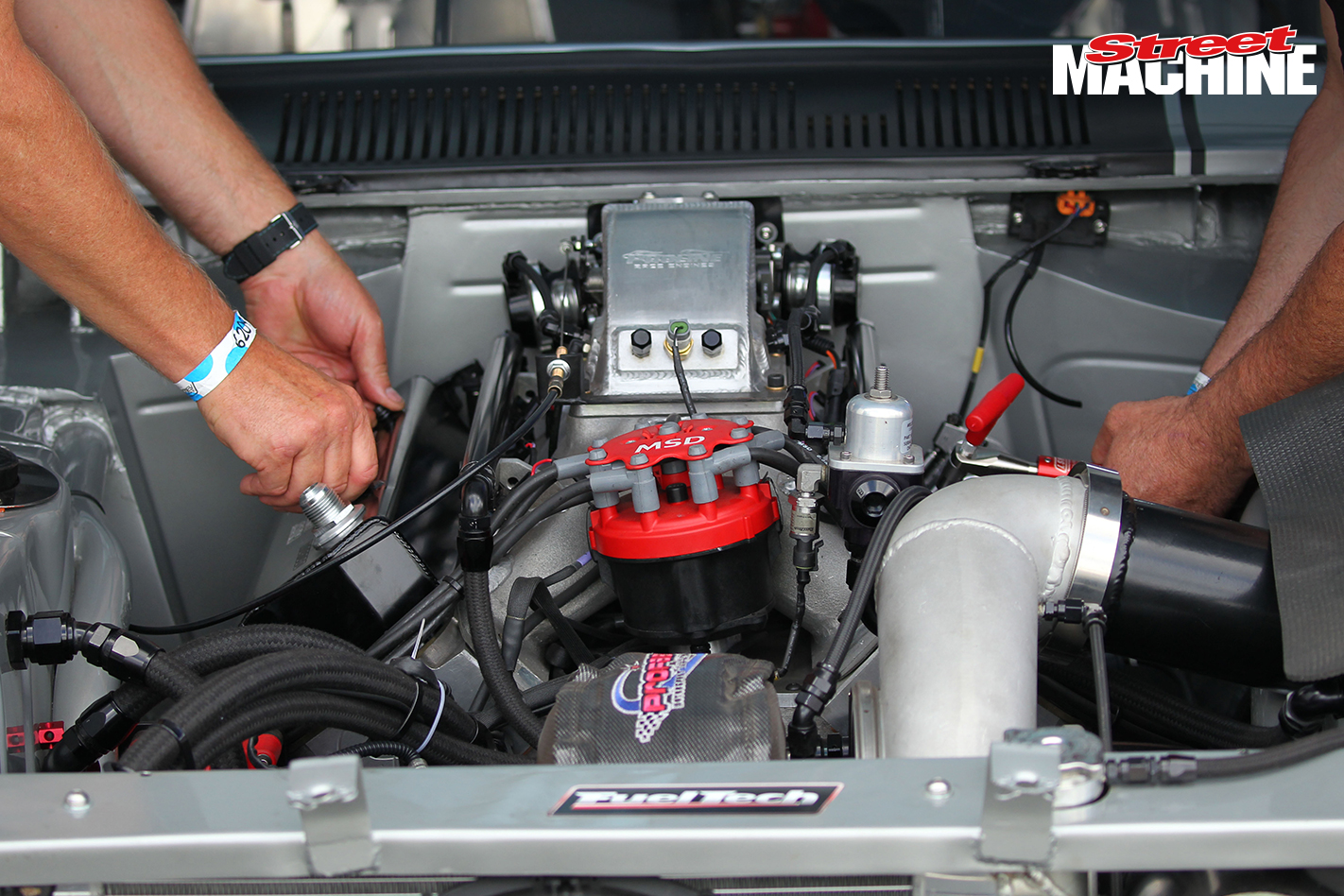 How did the Capri come about?

I wanted to build a Pro Street race car out of the 10-second fastback Mustang I own. It was going to get tubs and a full chassis, but it was too nice a car to cut up, so Frank from Dandy Engines put me onto the Capri and we did that instead. It had a ladder-bar rear end in it, so Joe Gauci from Profab Motorsport Fabrications re-designed it all.

And the car is now running a four-link rear end?

Yes, it was all over the place going down the strip on ladder bars, so Joe put in a four-link and did a few other subtle changes to make it more comfortable for me to drive. After that we went out and did a heap of 60-foot test passes with it, but it kept turning right on us. After some more fine-tuning though we finally got it going straight and started pulling 1.1-second 60-foot times. 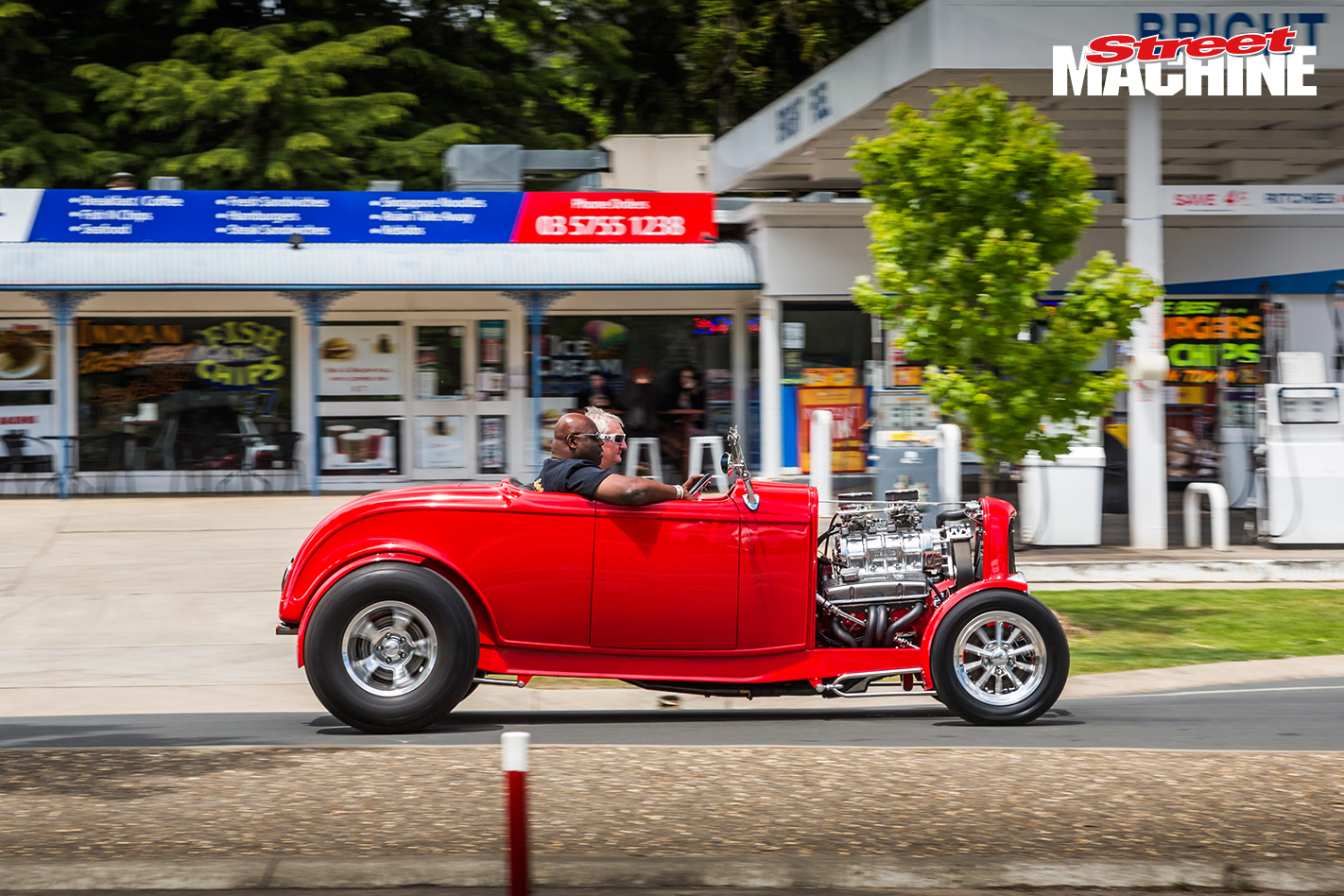 What class do you run the Capri in?

It’s in unlimited Pro Street Blown; we didn’t build it for the class, or any class in particular, it’s just where it ended up. I’m playing with the big boys basically. I’d never raced in it before, only done solo passes, so to win the APSA round, well, it just feels like a movie. I really need to thank Frank Marchese and Dandy Engines, Joe Gauci from Profab and all those that supported me getting the Capri to the track.

Running seven-second passes in competition must be a big step up from 10-second street cars?

Yeah, it’s a huge move, a massive step up. The Capri is half the weight of anything else I’ve ever raced. It doesn’t look it, but it’s pretty brutal. Turbos are a totally different thing to drive. It’s incredible the way the power comes on, and that’s only running at 25psi; it will go to 40psi easy. 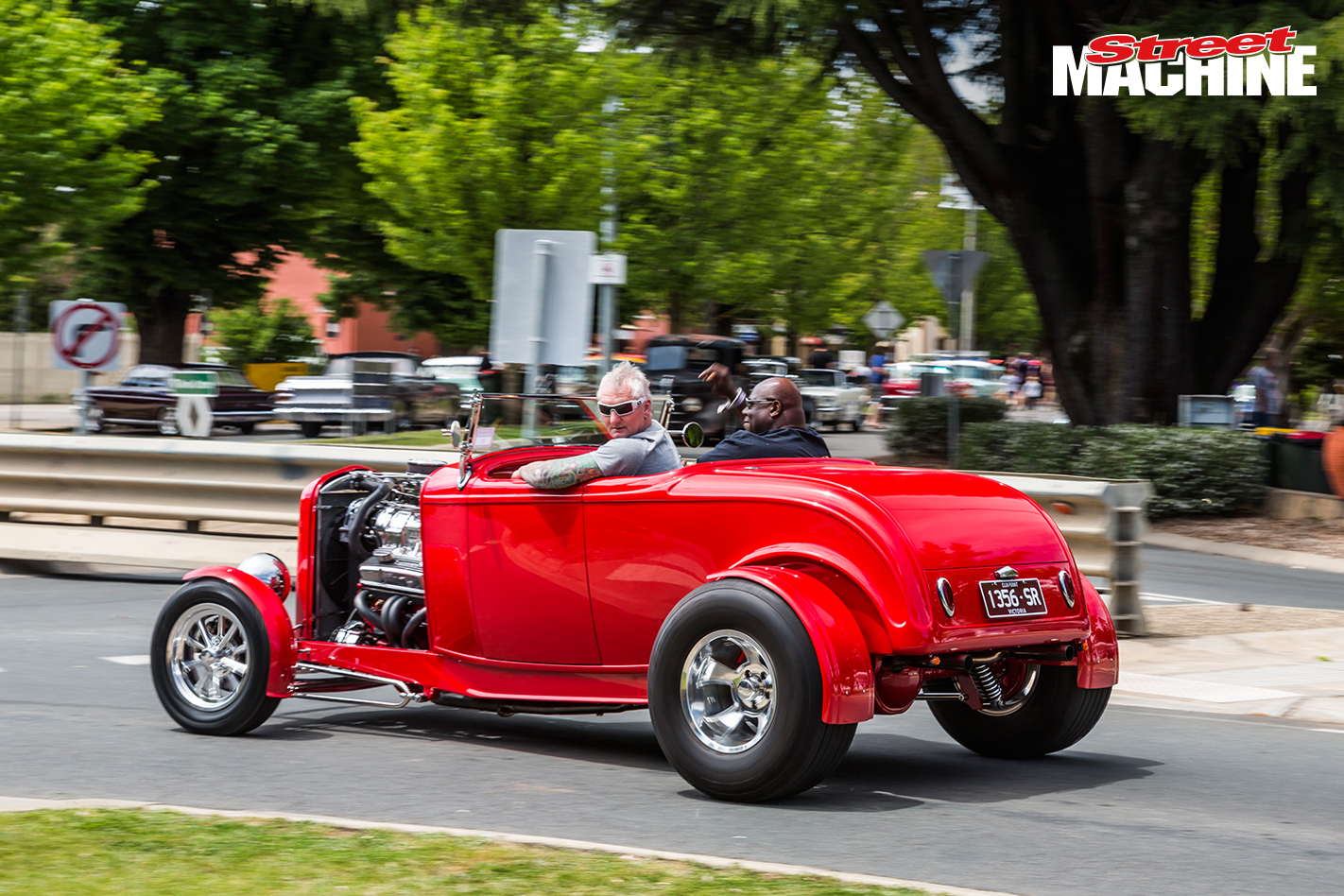 So how quick do you think it will run with 40psi?

If we can keep the front down a bit we are looking at sixes. We’re going to put a weight bar on the front – at the moment it’s on the wheelie bars pretty hard, and by half-track it’s trying to be a tricycle!

You’ve got a pretty cool collection of cars. Did you race any of them in Australia before the Capri?

Yes, I have some 10-second streeters: a ’65 fastback Mustang, a Plymouth Road Runner and a ’71 Holden HG Premier. The Prem runs a Dandy Engines 440 small-block; it’s naturally aspirated and has run 10.6@132mph. It’s not quite a sleeper, but it’s close. I’ll be doing Hot Rod Drag Week in it next year. A few friends did it last time and had a ball, so I’m looking forward to it. 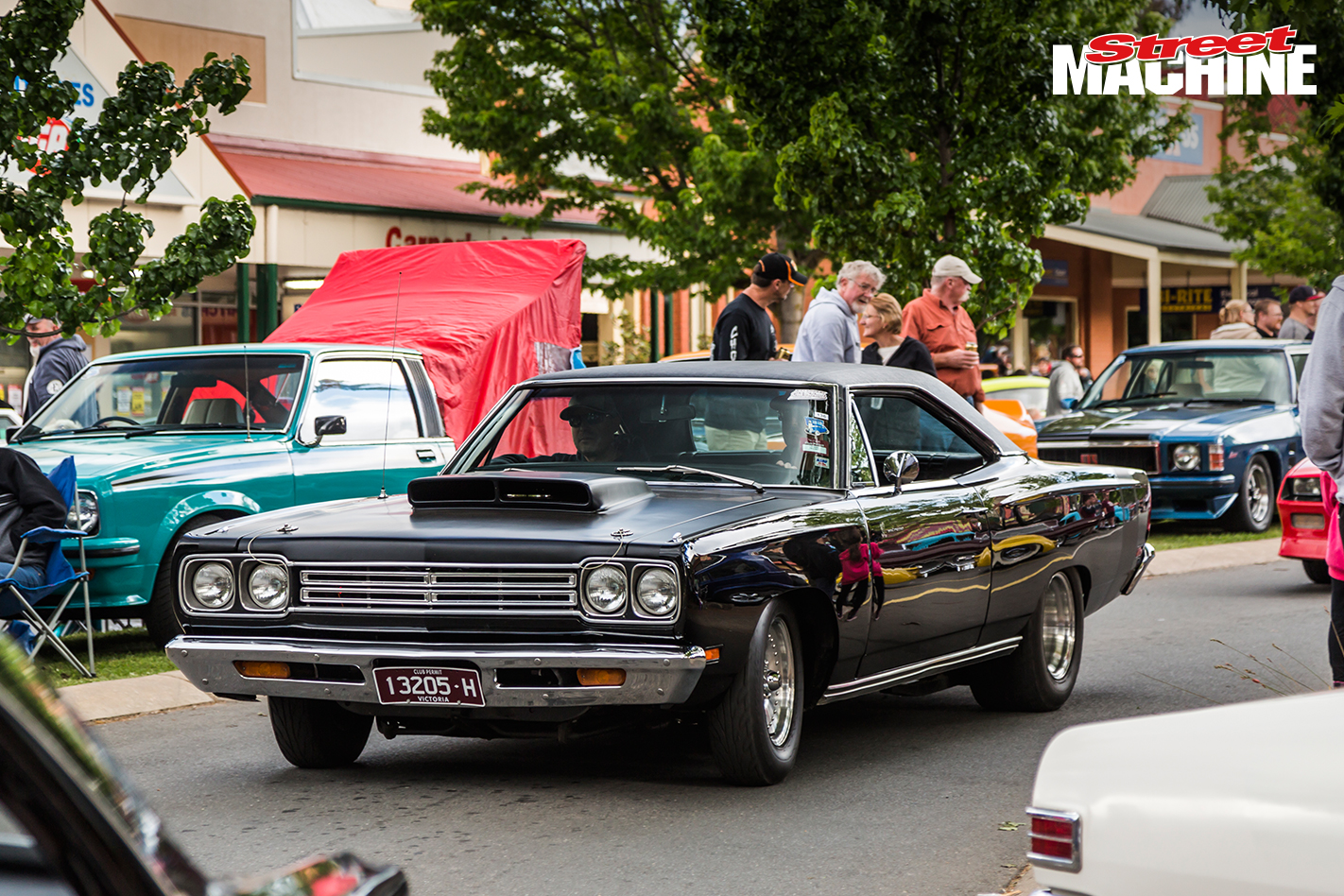 The 1969 Road Runner started life with a 383ci big-block, but I’ve stepped things up and had a 572ci big-block Hemi fitted. Transmission is a 727 Torqueflite with a manual valvebody and transbrake, built by Frank at Protrans, with a 4200rpm stall converter from TCE. I’ve run 10.90s in it. We could make it quicker but I don’t want to have to put a rollcage in it.

What other cars are in your collection?

There’s a ’66 Pontiac GTO that’s completely stock. It’s really beautiful and looks like it came off the showroom floor. I have a pair of Mustang fastbacks; one is a ‘rent-a-racer’ clone, and the other is the 10-second car that I was going to cut up. 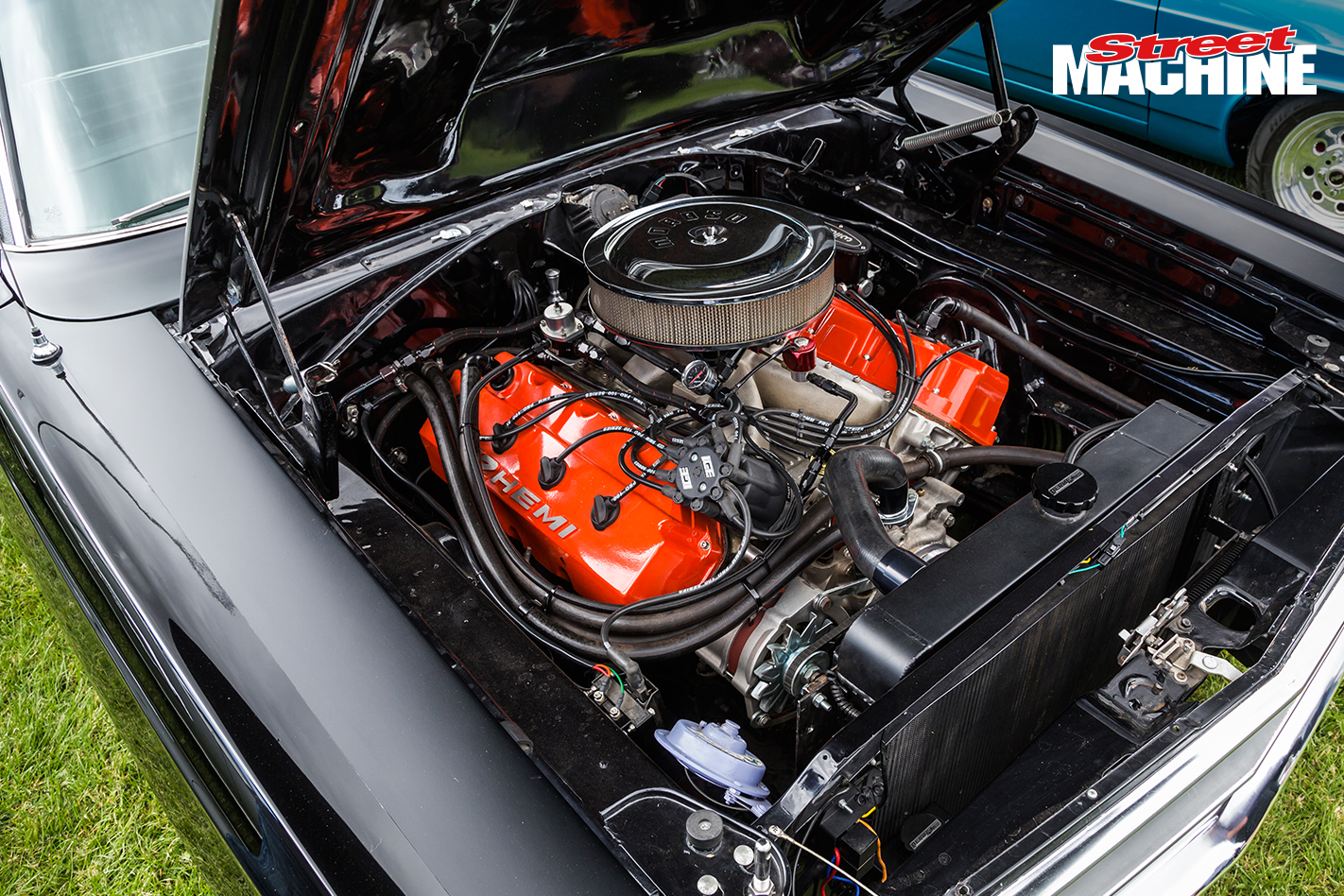 I also have a ’65 Chevy Impala, a Nomad, and the ’32 Ford hiboy hot rod that I took to the Bright Rod Run (SM, Jan ’17). I bought it already built, but wanted it to be a more traditional-looking rod, so I changed the wheels and carbies. The motor’s nothing over-the-top, just a mild 350 Chev with a 6/71 blower. Gearbox is a Turbo 700 and the rear end is a nine-inch. It’s built as a cruiser but it goes great; the power-to-weight makes it a ball to drive. Anyway, at least if one car goes down I’ve got another to jump into!