From work to play: toy cars inspired Kosta Contis to jam a V10 Viper into his Valiant ute

With a punchy, mean exterior and V10 Viper power, Kosta Contis's Chrysler CL Valiant ute will have you Key Lime Green with envy

THE ABILITY to think logically can be a godsend when planning a project. Take Canberra’s Kosta Contis, for example. When looking for something different to power his CL Valiant ute, he simply turned to a couple of toy Mopars that were sitting on his shelf. 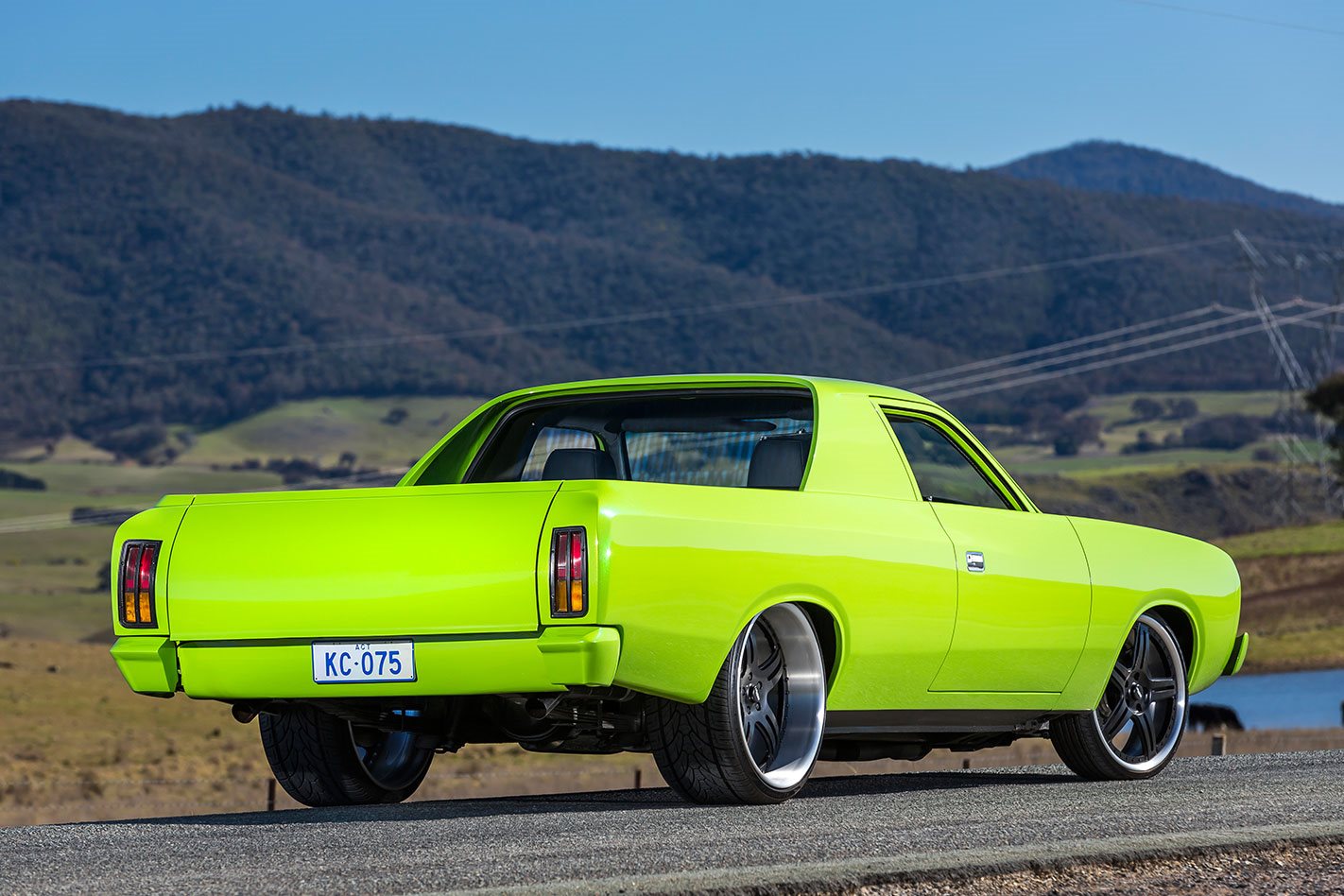 Keen eyes will notice the filled rear quarter corners and extended sail panels immediately aft of the B-pillars, which visually improve the ute’s proportions while adding a race-inspired flavour

“The models were a Dodge Charger and Dodge Challenger, both fitted with V10 Viper engines, and as they’re built to scale, I figured if a 1:25-scale V10 fitted into a 1:25 model engine bay, then a real one should fit in my ute,” he explains. 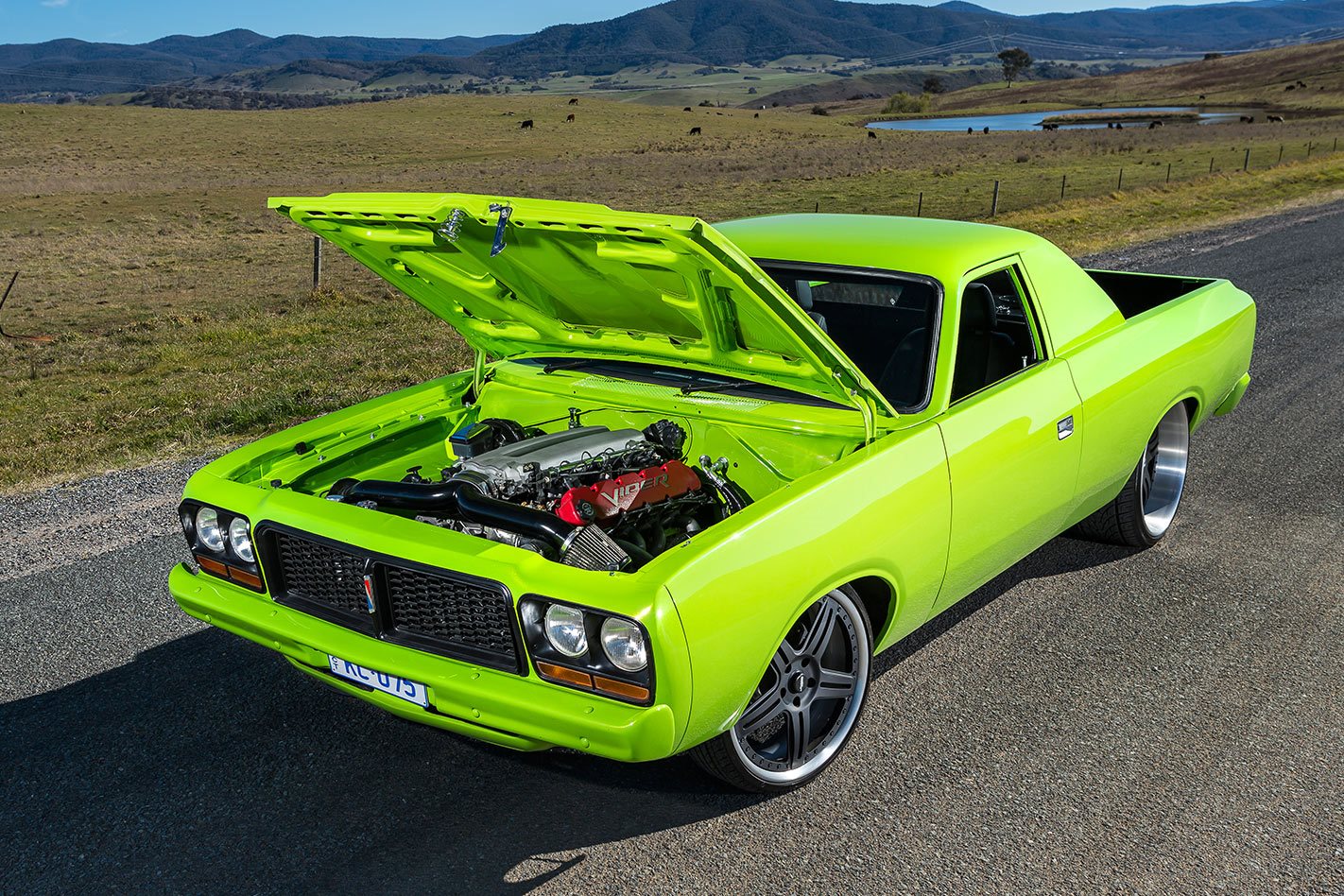 Of course, Kosta’s experience with cars had forewarned him to the likely reality of engine mount, sump, steering and exhaust issues. But, in fact, the swap was remarkably straightforward. “Surprisingly the drivetrain conversion was the easiest part of the project; it pretty much slotted straight in,” he says. “Finding people to carry out other aspects of the build and actually do a good job – now that was the headache!

The plans for Kosta’s ute weren’t quite so grand when he bought a 318-powered CL nearly a decade ago. As a builder by trade, he was looking for a work ute to haul around his tools and equipment, and the ol’ Val happily earned its keep ferrying around loads of anything and everything. But the car guy in Kosta wanted to upgrade and customise it, so it was stripped down in preparation for some loving. 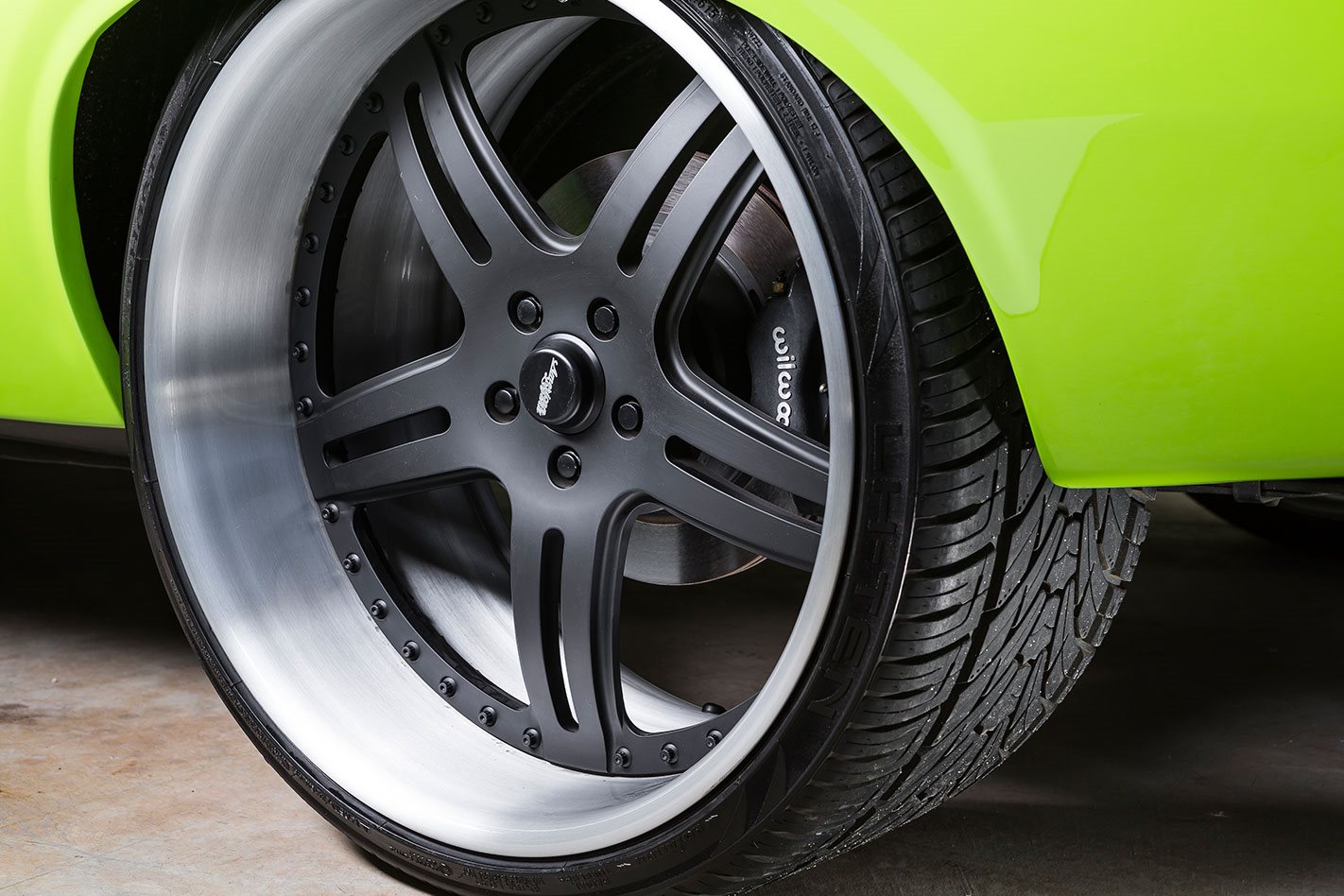 The big-inch rims are Havocs from the American Racing catalogue, and underline the build’s marriage of new and old tech

“After going to a few events, I noticed that people were starting to fit the new-gen 392 Hemis, so I wanted my ute to be different again,” Kosta says. “I wanted to be the first person to put a Viper engine into a Val and prove that it could be done. I chose the 8.4-litre [513ci] V10, as it’s a really well-balanced engine and has all the power and torque I’d need in a ute.” 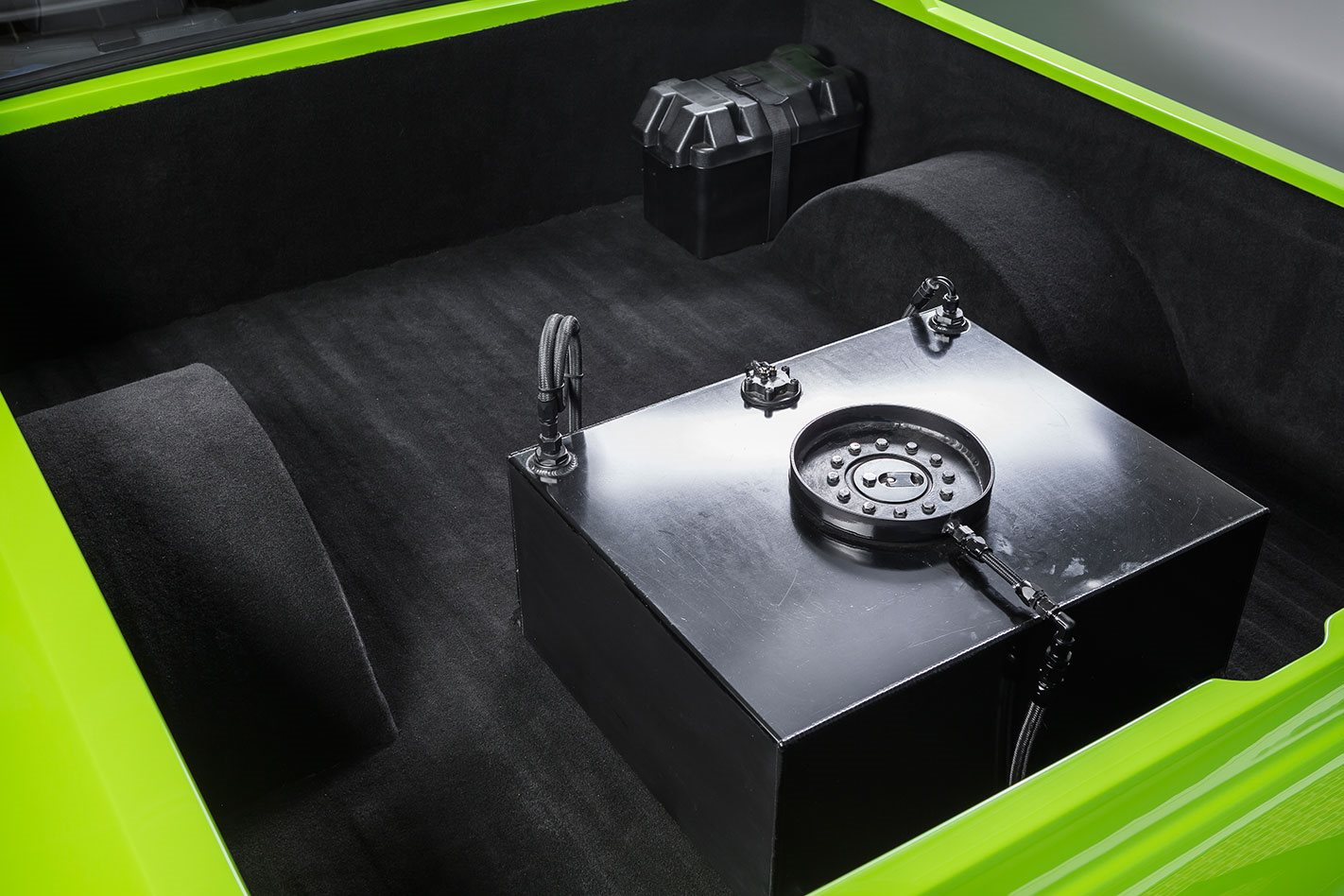 The rigours of hauling heavy tools and equipment in its former life as Kosta’s work ute have been traded for gentler duties. A relocated battery, fuel cell and neat tubs live in the comfortable surrounds offered up by tailored black carpet

Kosta sourced the engine and gearbox from x2Builders in the US, which specialises in Vipers and Dodge SRT pick-ups amongst other exotic models from the Big Three. The company fixed him up with an ex-SRT Viper donk mated to a four-speed automatic transmission from an SRT Ram.

“I use a Haltech Elite ECU for engine management,” Kosta says. “However, it doesn’t control the transmission, which is why it was converted to full manual operation. It’s already a tough auto in stock form, so is more than up to task.” 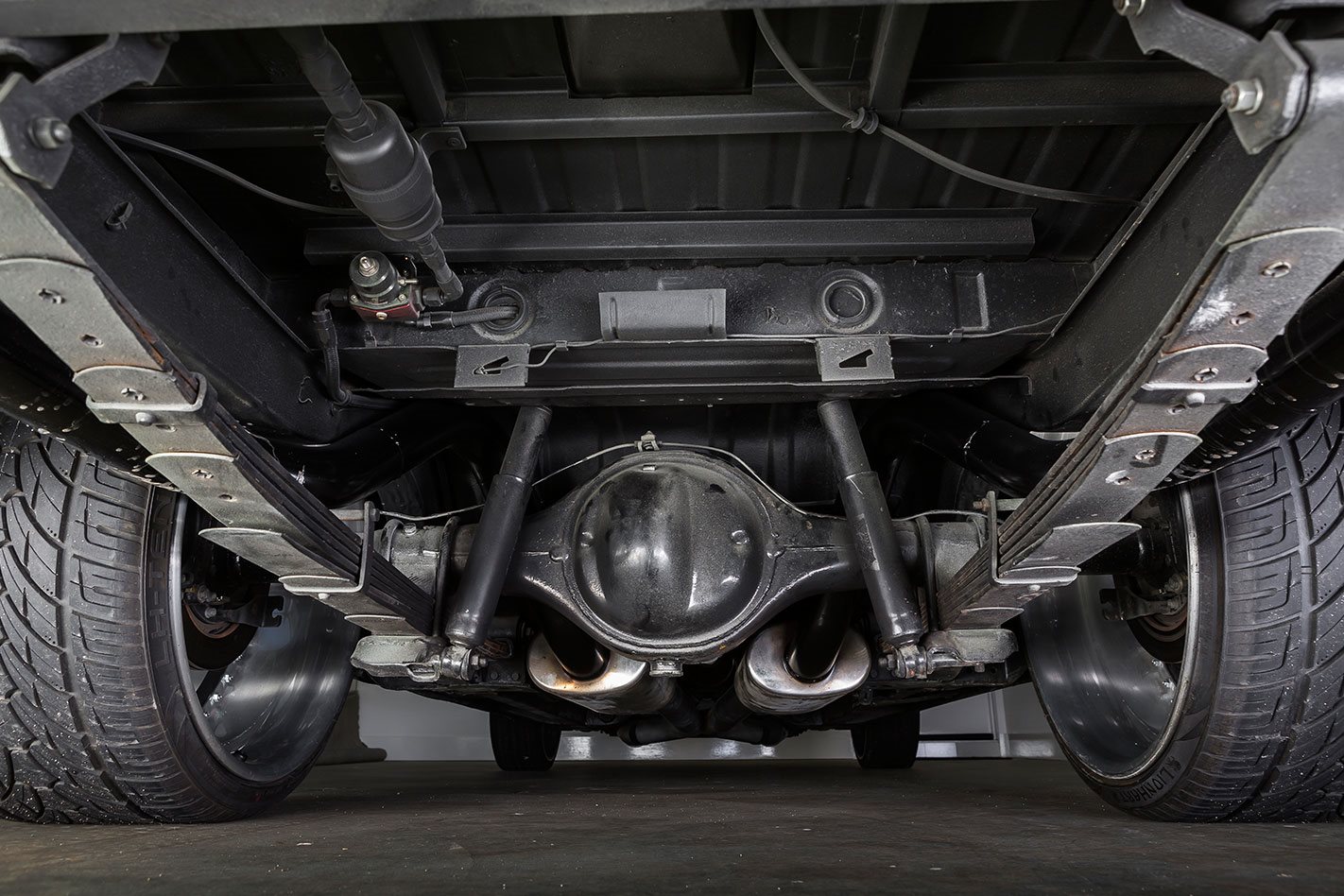 The team at Goodyear Tyres in Fyshwick handled any necessary fabrication work, which sees the engine and transmission sit so nicely in its new Aussie home. While they were at it, they fitted a Hemi Performance power-steering rack conversion and moved the rear leaf springs inboard of the chassis rails for added clearance.

This, along with decent tubs, were necessary due to Kosta’s plans to run big wheels; the mix of 20x8 and whopping 22x12 American Racing Havoc rims demanded plenty of real estate under the CL’s flanks when wrapped in 215/30 and 335/25 treads, respectively.

Squeezed between these rear hoops is a narrowed nine-inch diff running 3.5:1 gears, a limited-slip centre and 31-spline axles. 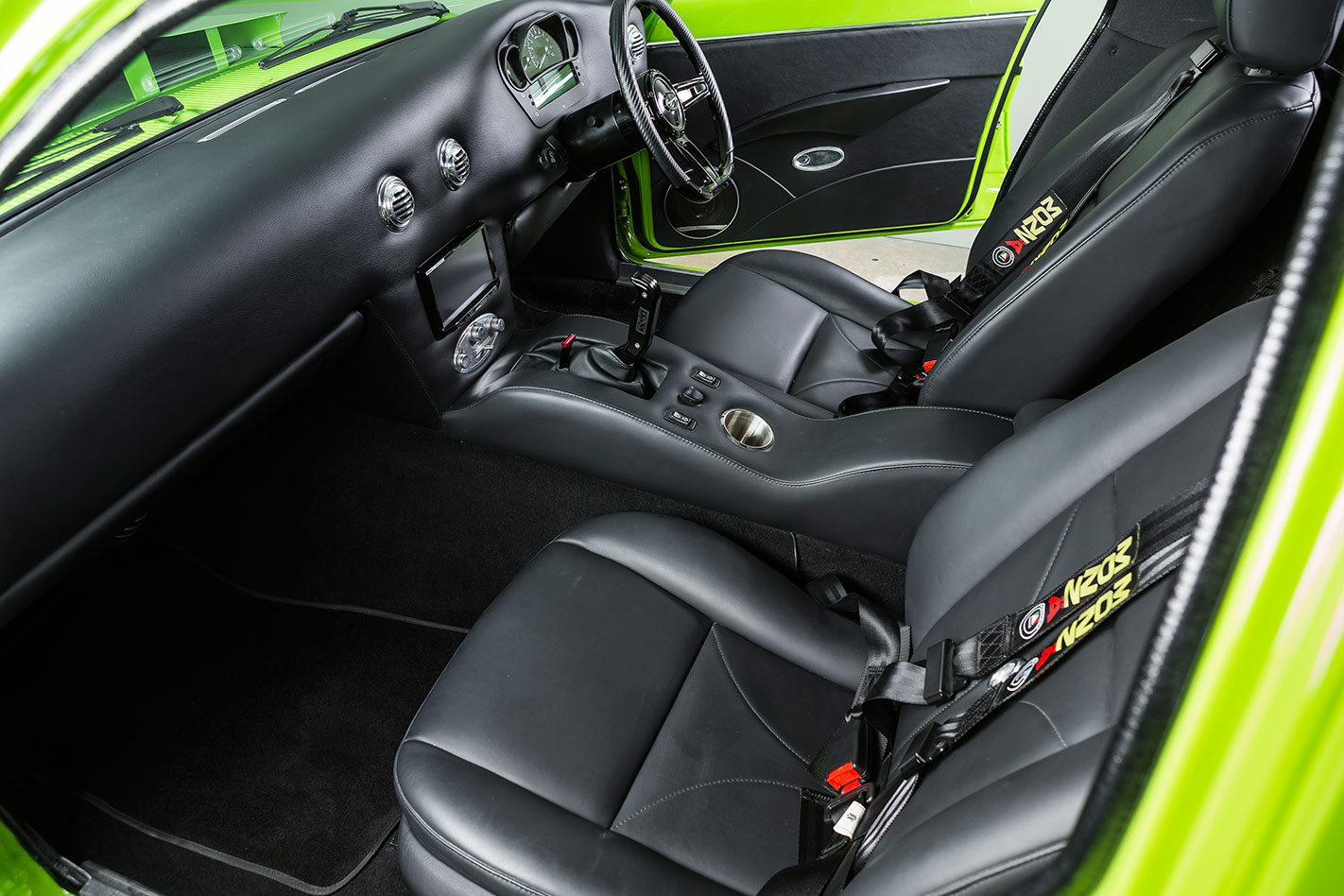 Custom extractors send the spent gasses to the rear of the vehicle via a twin three-inch exhaust. Cooling-wise, a custom alloy radiator with twin thermo fans reins in the mega mill and shares space with hefty engine oil and transmission oil coolers. 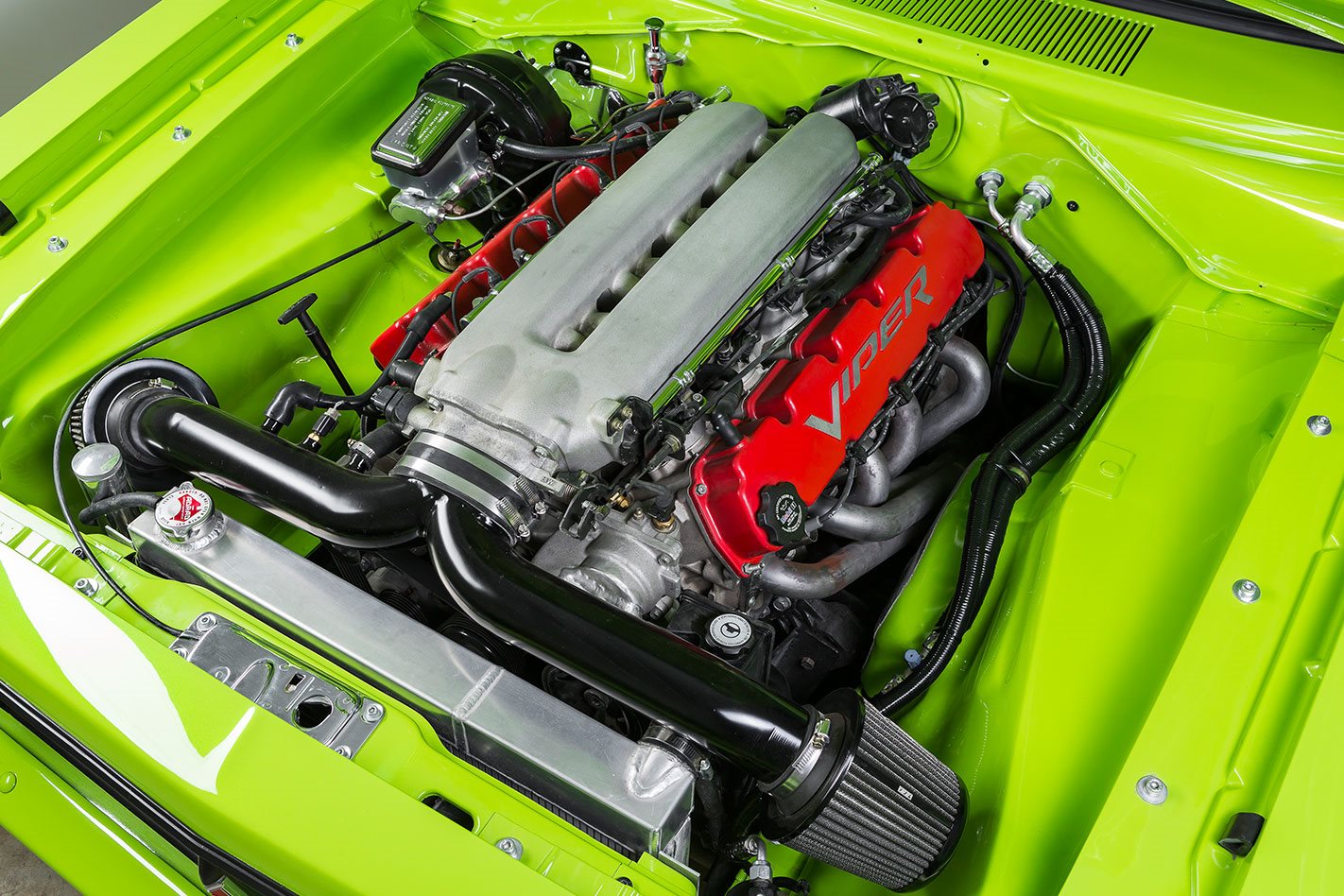 We love this type of streetable chaos! The Dodge Viper V10 8.4L donk is rated at 600hp and 560lb-ft, which is more than ample for Kosta’s needs

The panels had the usual rust and dings you’d expect from a working-class bodystyle, but the ute offered plenty of potential.

Before the eye-catching PPG Key Lime was laid down, Kosta specified a few changes to stamp some individuality on the CL. Like most utes, a Valiant’s interior space benefits greatly from extending the rear cabin wall into the tray area. While this was being sorted, Kosta had the rear of the B-pillars extended to form sail panels. 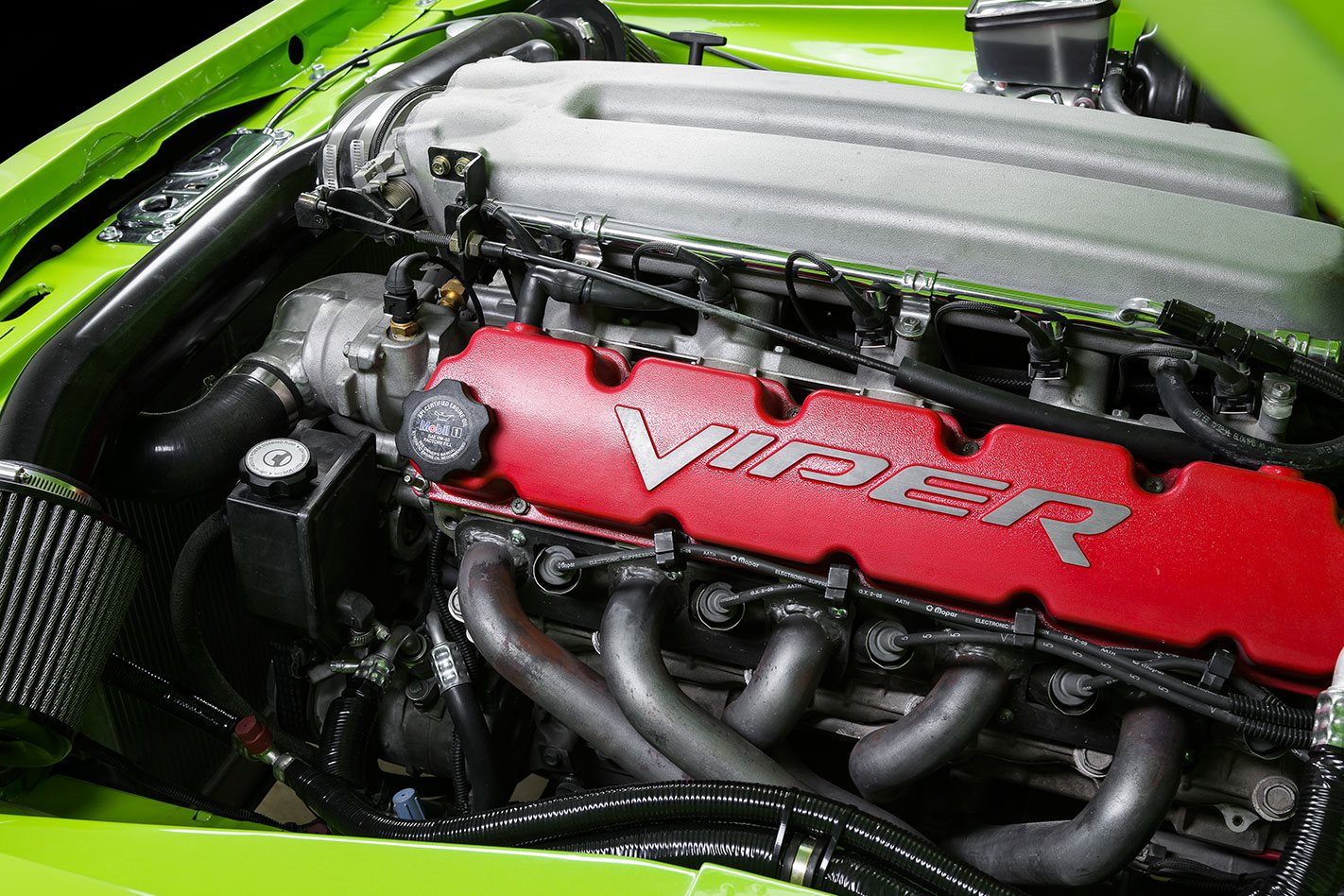 The all-alloy construction shaves a few pounds off the ute’s kerb weight, and with both 90-degree V8s and the long Hemi sixes as factory options back in the day, the engine bay already had ample width and length to swallow up 10 cylinders

“That idea spawned from a couple of influences,” he says. “It was a nod to an old favourite of mine, Alan Cooper’s inaugural SMOTY-winning BLOBAK 2 Holden ute, and I was also keen to replicate the taper of a Charger roofline. The turret was further modified by keeping the drip rails but sheeting over them to make the roof appear wider and smoother, to keep everything in better proportion.”

The fuel filler was deleted along with any superfluous badging and chrome, while the aforementioned wheel tubs and a slimline reverse-cowl scoop were added to provide additional form and function. 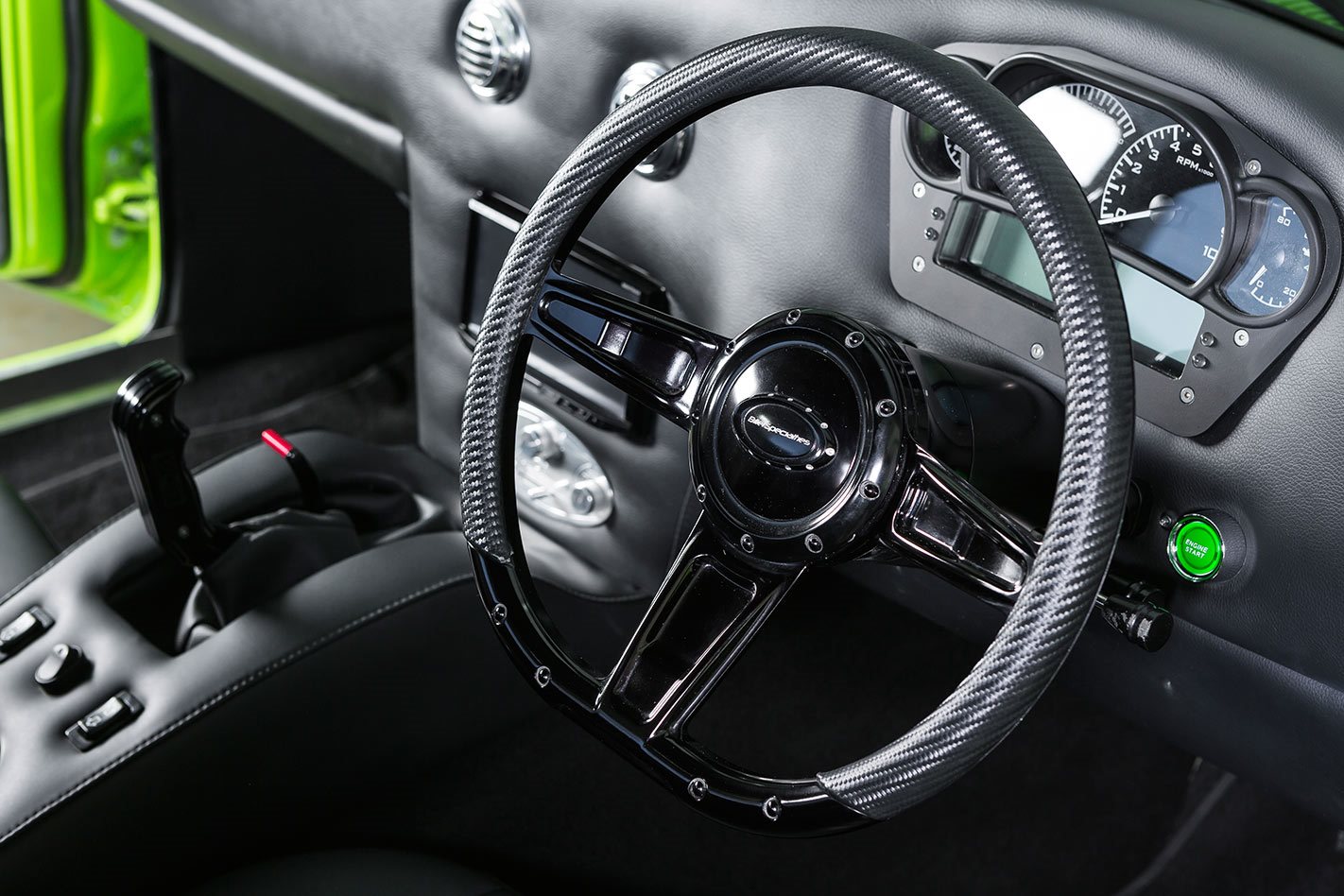 The foundation bodywork and paint were initially entrusted to one particular workshop, but Kosta was less than pleased with the quality of the work and was left with a smouldering wallet to boot. Thankfully the guys at Real Steel Group in Queanbeyan were able to sort all of the problems and treat the CL to the quality panel finishing and paint it deserved.

The V10 donk, running gear and custom touches should have you left you suitably impressed, but the interior is surely the piece de resistance. That’s a huge call considering the individuality expressed with the rest of the project, but Google a pic of a standard CL Valiant interior and you’ll see what we mean. By 1977 Chrysler were on the skids in Australia and the standard interiors were well-dated; they still didn’t feature dash vents! A Charger-inspired interior or standard rework was never going to cut it, especially when nestled amongst such an innovative driveline and custom bodywork. 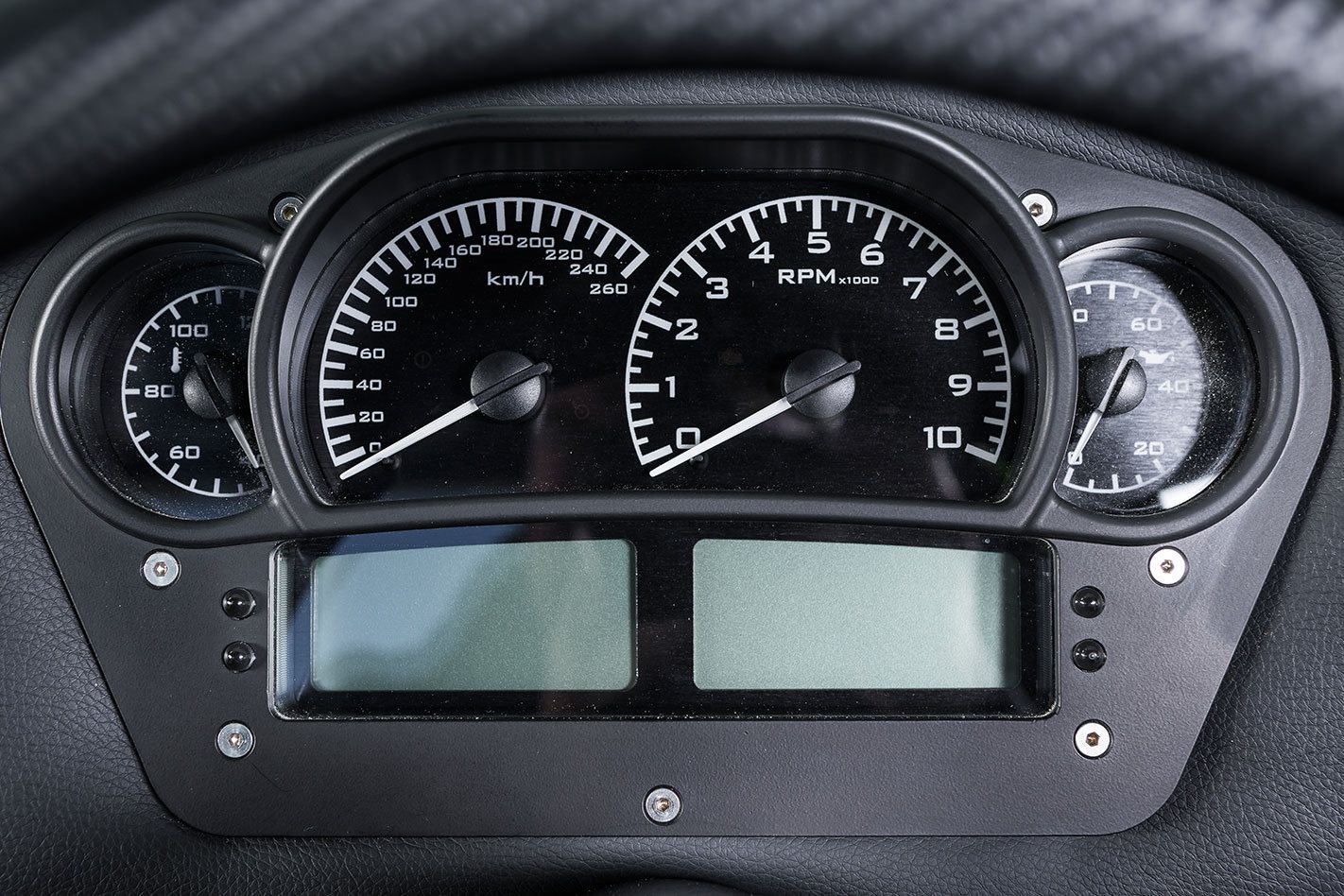 Rides By Kam should need no introduction to SM readers; their interior work has graced many elite builds featured in the mag. For Kosta’s ute, Kam and his crew completely redesigned the factory Valiant offering, replacing the standard bench with Monaro bucket seats and fabricating a complete custom dash assembly, door trims and centre console.

Vintage Air, power windows and central locking were incorporated, along with a keyless push-button start. A Dakota Digital dash, Billet Specialties steering wheel and B&M shifter perform the necessary driver-related functions. Black leather was stitched throughout and the overall package is crisp and modern without looking out of place.

“The ute is very smooth and easy to drive, and the modern comforts make it feel like a new car,” Kosta says. “It’s surprisingly good on fuel, unless you start getting excited on the throttle, which is easy to do!

“My wife Amanda loves modifying cars just as much as me, so she was also stoked to see it score a spot in the Top Five at Chryslers On The Murray, and pick up an Editor’s Choice award. Amanda is on the lookout now for a new project for us, most likely a Chrysler By Chrysler sedan or a Valiant wagon; it will be very clean-cut and unexpected. We have four kids, so we need more room; at the moment they duke it out wanting to go for rides, which opens up a whole new world of pain for modified car ownership!” 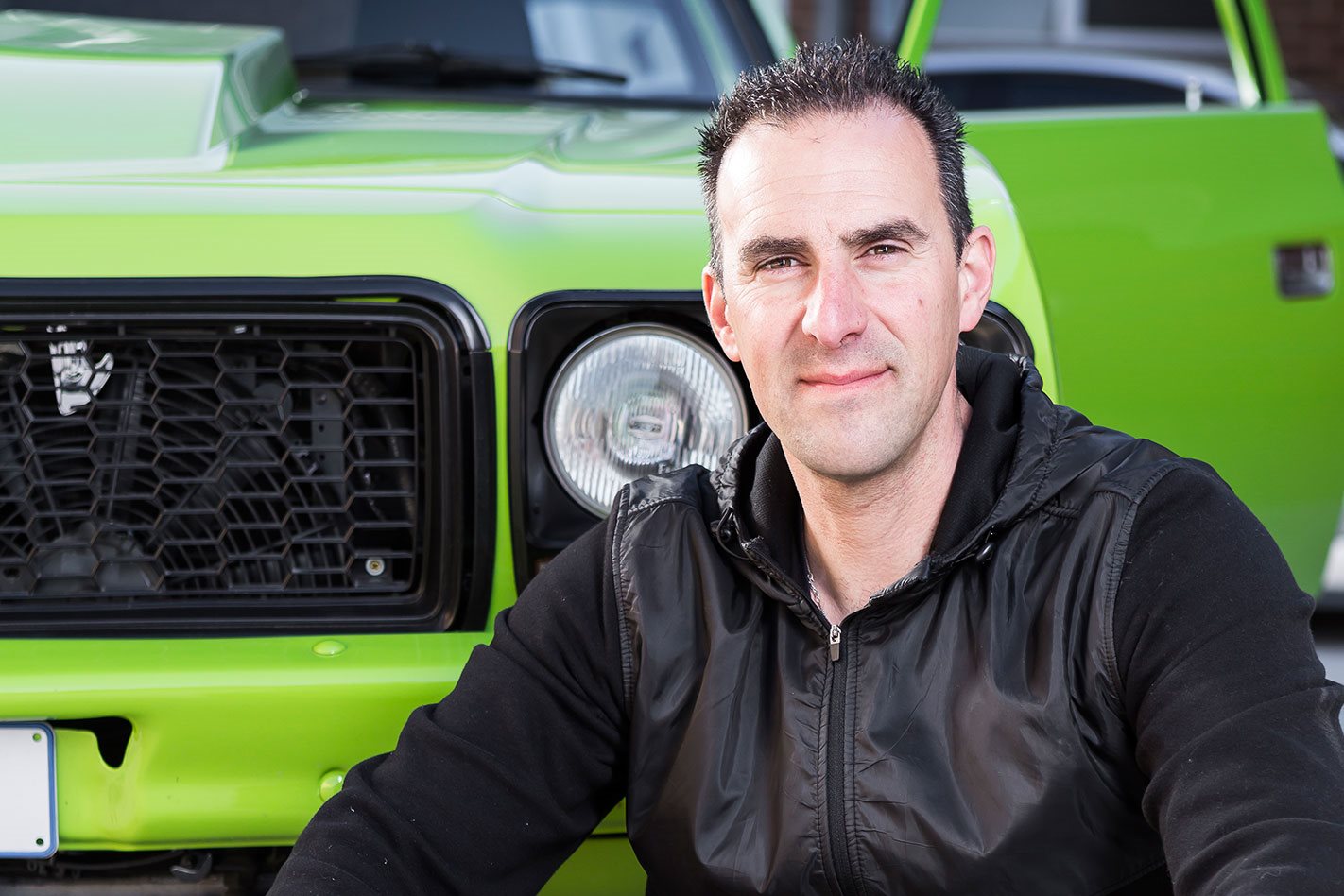