Ian Rainbow’s nitrous-fed big-block ’50 Chev ticks all the boxes, on the street or at the strip

MY WIFE, Trish, made me buy this car back after selling it 12 years prior,” Ian Rainbow says.

First time around, the ’50 Chev was family transport; it ran a smog 350 under the bonnet and Trish used it for the school run. 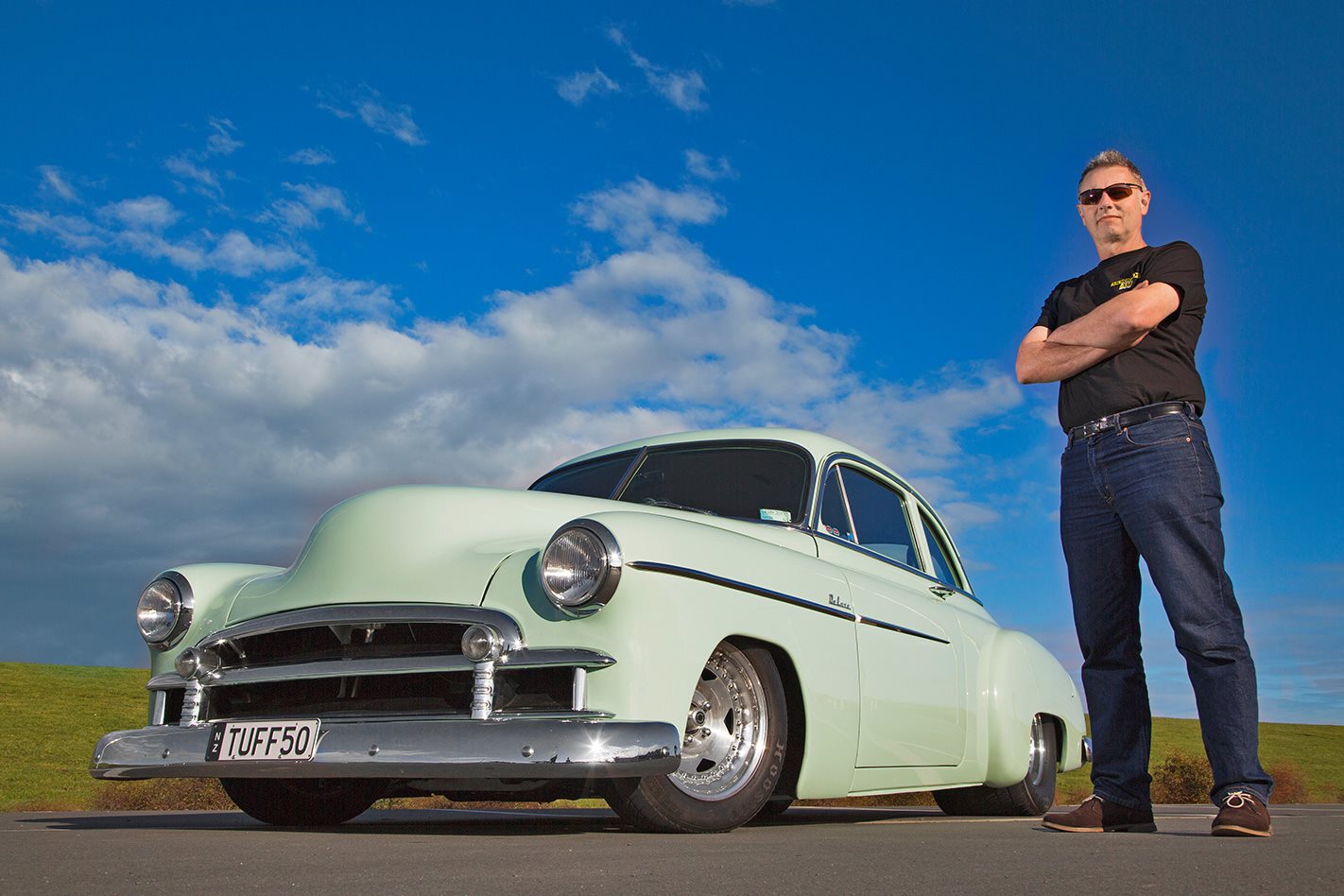 Bought in totally original straight-six configuration, Ian repowered it and fitted a Holden front end to get it closer to the tarmac with help from his friend Graham McNabb. But as life dictates, priorities changed and the Chev was sold. Gone but not forgotten.

Ian and Trish have been deeply involved in the NZ hot rod scene since the 70s and have a decent roll-call of cool cars to their names, including the ’37 Ford cabriolet featured in SM, Apr ’05, which they still own. 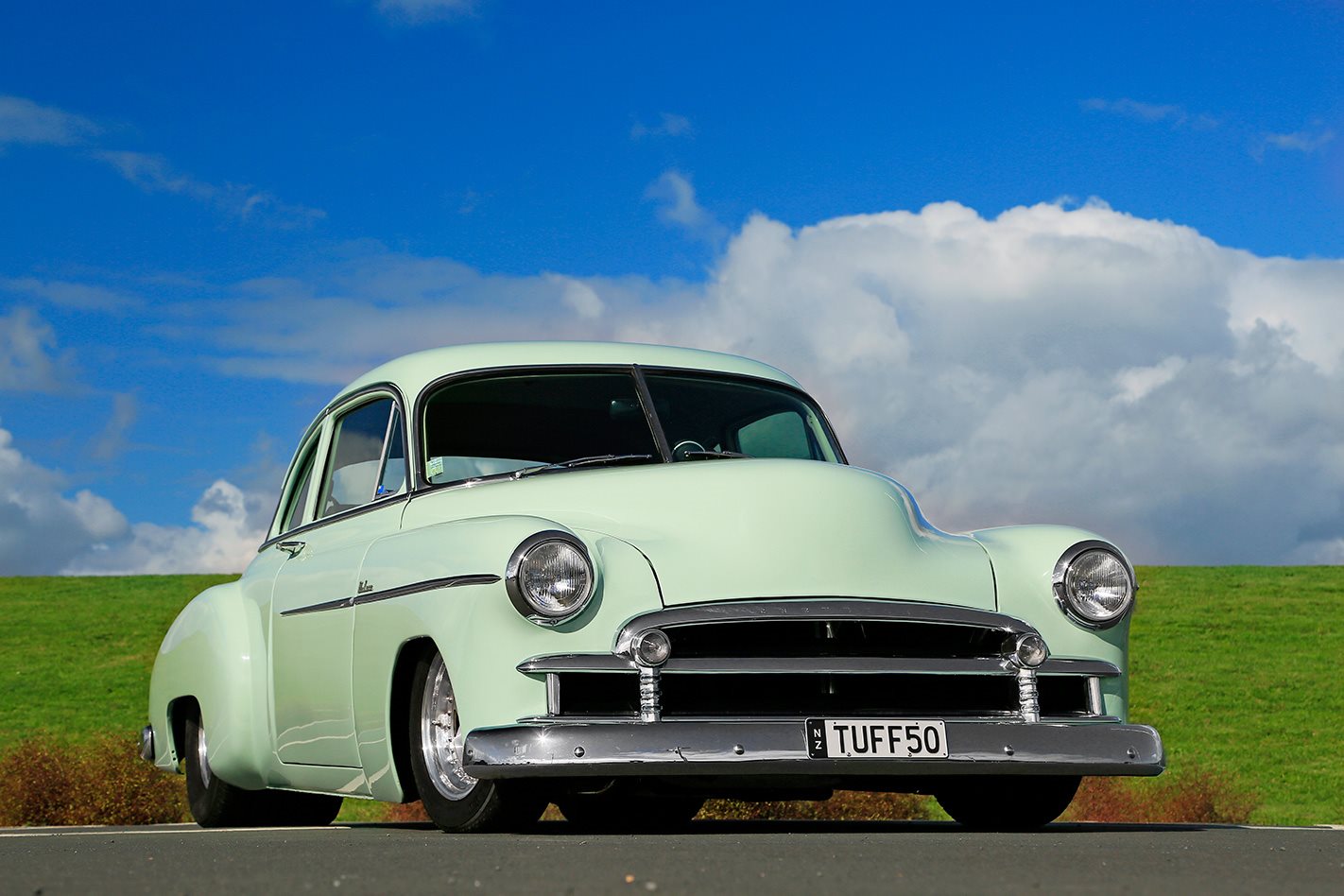 Trish’s memories of the ’50 Chev were brought to the fore when she was flicking through the family photo album and she prodded Ian to find the car and buy it back. A true dual-purpose street/strip project was already on Ian’s bucket list and with the Chev located, he wasted no time putting his plans in motion.

The build took two years and began with Ian purchasing an Art Morrison ’49-’54 Chev coupe chassis from the USA. “It was the best purchase I made,” he says.

The rolling frame arrived with tubular A-arm independent front suspension, Strange coil-overs and Wilwood brakes at each corner. And despite the adjustable four-link rear swinging a Strange nine-inch with 18½in Hoosier Pro Street Radials on Convo Pros, it’s a real cruiser. 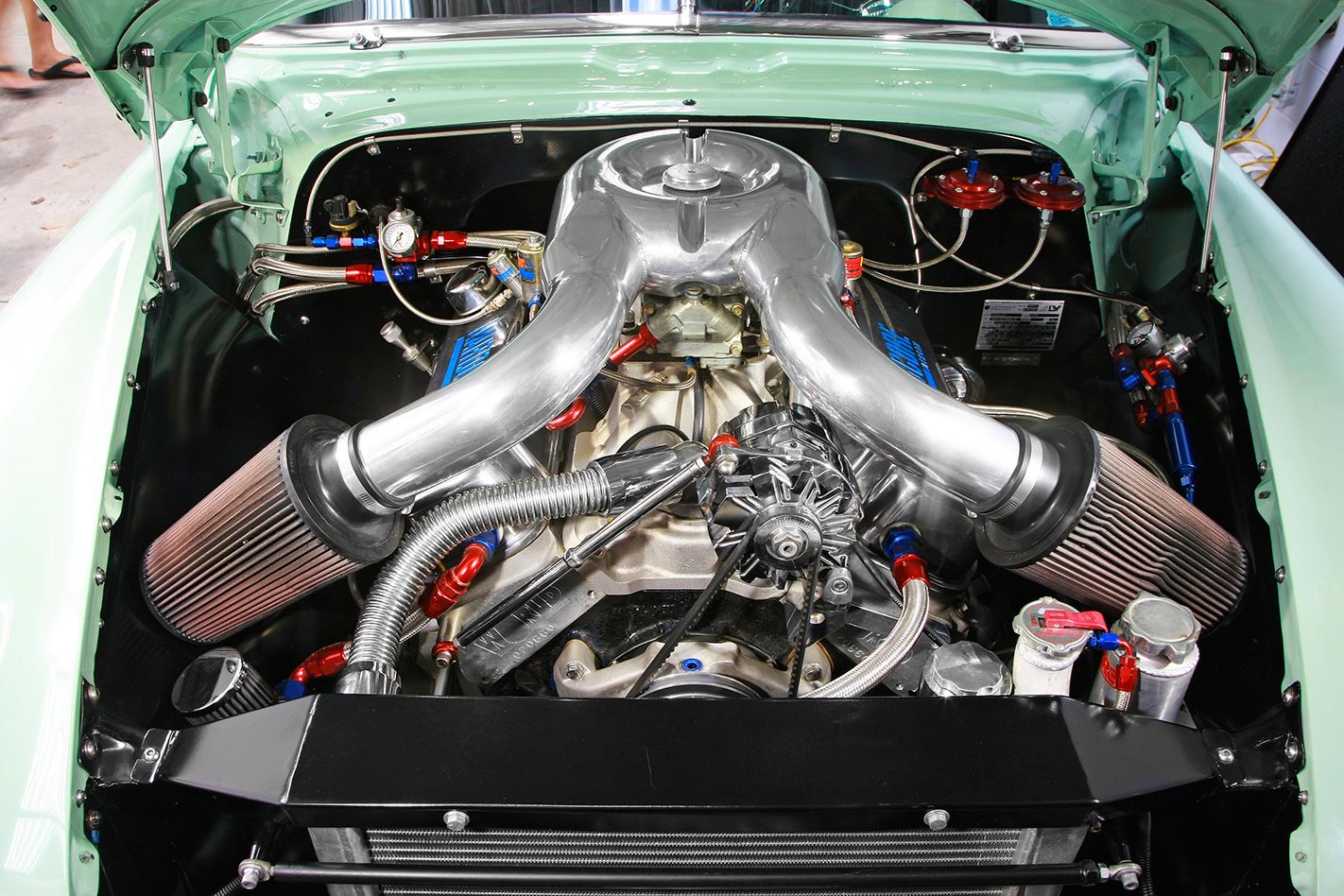 Ian was determined not to cut the bonnet, hence the twin-snorkel air cleaner set-up. Dave Moyle from Pro Street Racing Engines went to town with the 572ci BBC but it’s equally at home on a rod run or at the strip thanks to the Gear Vendors overdrive behind the Turbo 400

The other purchase Ian couldn’t live without is the Gear Vendors overdrive on the T400 trans, as it’s worked wonders on the driveability and economy of the nine-second naturally aspirated big-block. On 4.36:1 gears, a trip from Auckland to Christchurch for Muscle Car Madness, returned 16mpg (17.65l/100km) economy.

Okay, full disclosure — Ian owns Key West Fabrication & Supplies in West Auckland and is a dealer for both Art Morrison and Gear Vendors.

The car’s original appearance belies the work beneath and that was the idea. Stu Rosser tackled the panel work and removed some side chrome along with the bulky bumper overriders. 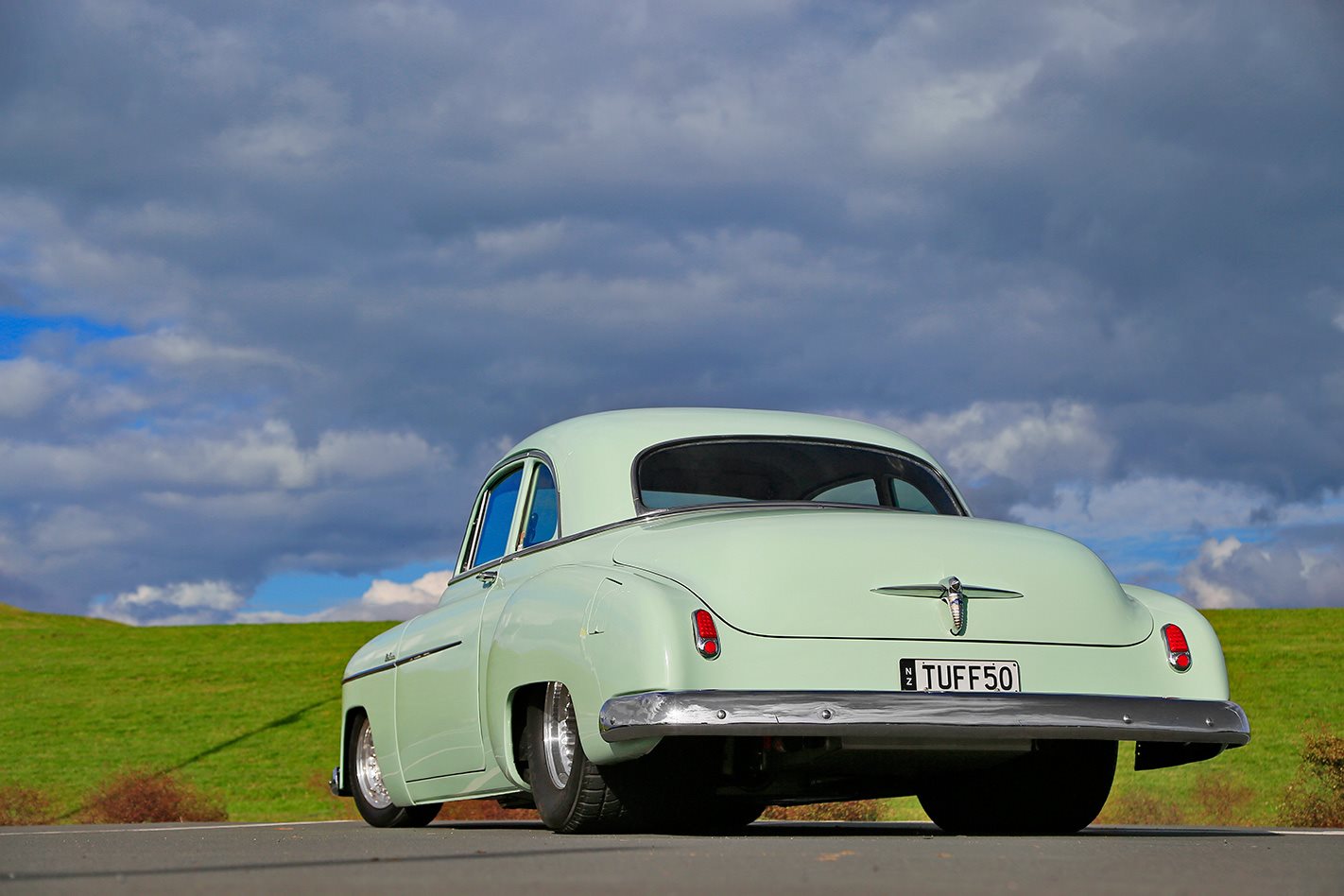 Original GM Mist Green colour was re-applied by GA Car Painters and that’s complemented by the brown leather interior,which was stitched up by Design Auto Interiors in Rotorua.

A peek inside gives you the first hint of how serious this car might be — there’s a full array of Auto Meter Phantom gauges and a tachometer on the dash, plus the B&M competition shifter.

On race day, the plush bench seat is yanked out and a bolt-in six-point rollcage, five-point RJS harness and Kirkey race seat are installed. Even the armrests have to be removed as they foul on the side intrusion bars. The back seat has to sit it out too, to allow the ’cage to be secured. 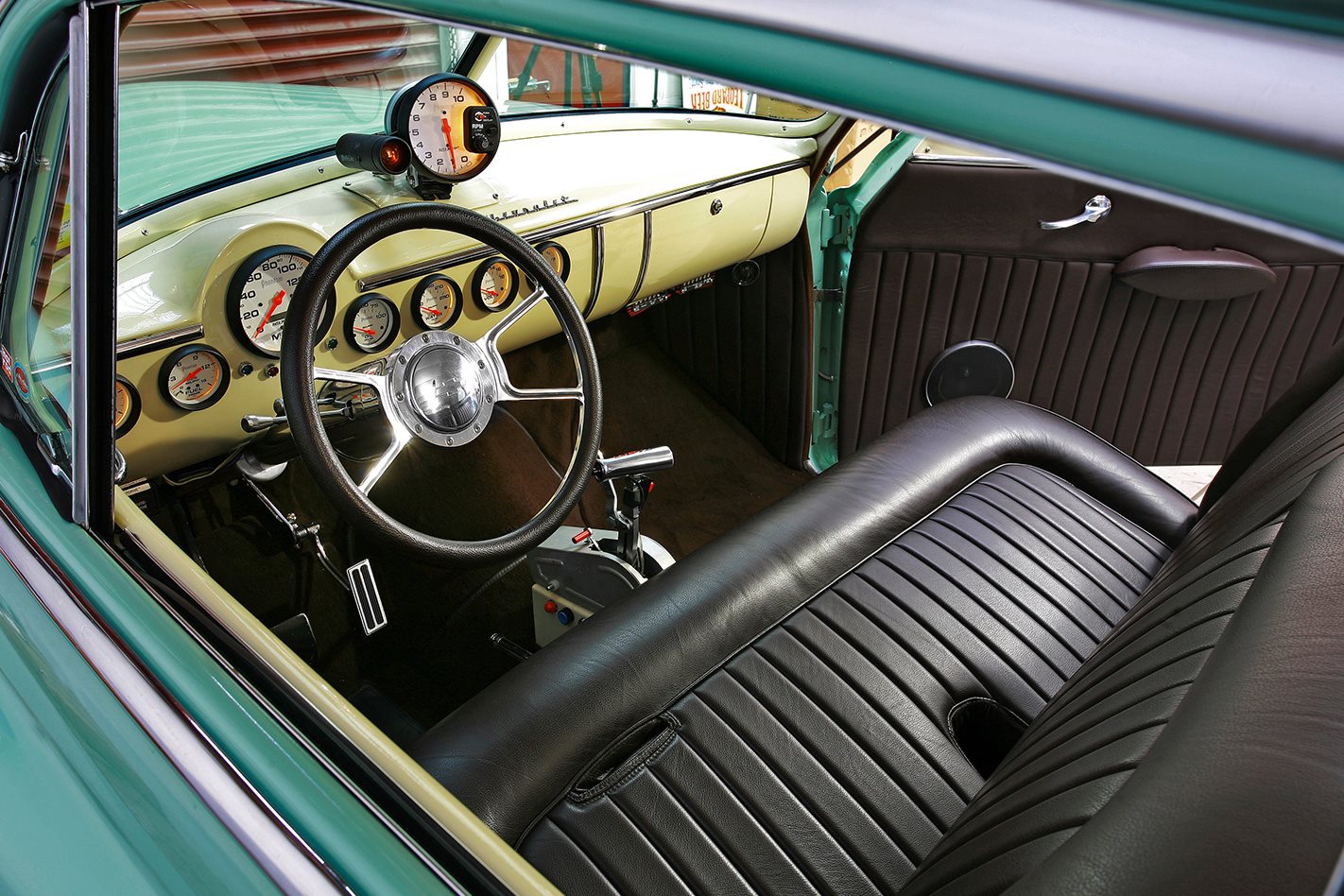 Under the car, they drop the diff, swap the rear coils for a lighter spring rate, remove the Panhard and anti-roll bars, and bolt up drag slicks on Cragar Pro Star rims.

Up front, front runners on Cragar Pro Star rims go on, then the nitrous bottles are filled and the pump gas is switched for C16 race fuel.

It sounds like a lot of work for a couple of meetings per year — the American Muscle Car Club Father’s Day Drags in September and the Club/Champs Nostalgia Drags weekend in March — but that’s the hot rodder in Ian coming out. As much as he loves drag racing, he built this car to a subtle sleeper look. 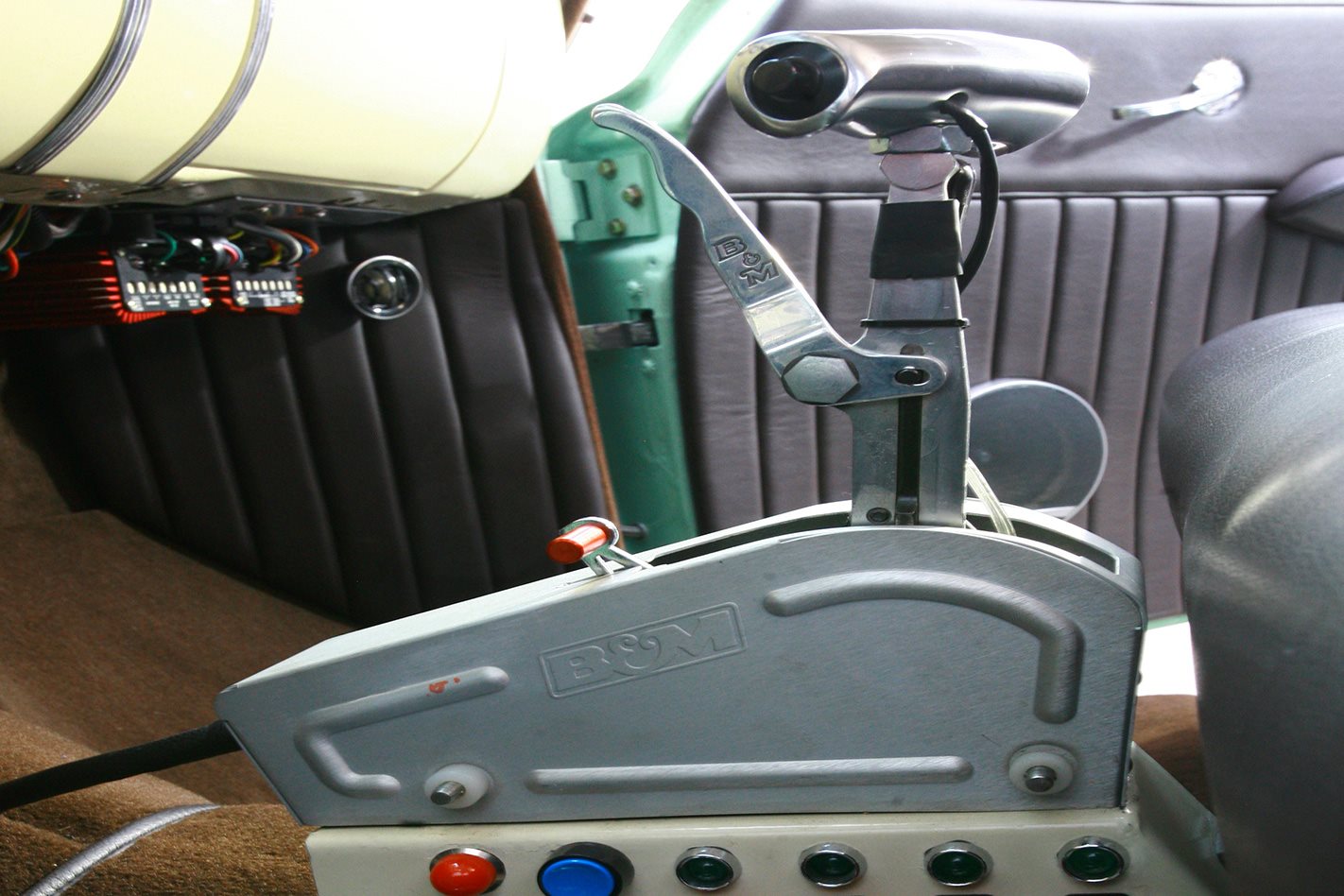 B&M Pro Ratchet shifter perches on an owner-made housing with NOS switches on the side. Button on the shifter actuates the Gear Vendors overdrive

But there’s nothing subtle about the 572ci Chev big-block. Built by Dave Moyle at Pro Street Racing Engines in West Auckland, the World block has been deburred and runs enlarged oil galleries and returns, with a Merlin Dominator manifold port-matched to Merlin 3 heads. Inside there’s a custom-ground hydraulic roller cam and an Eagle forged steel crank swinging Eagle H-beam rods with JE pistons to a PULP-friendly 11.1 compression ratio.

With a 1050cfm Dominator carburettor running a 400hp nitrous system and an MSD crank trigger, the package is good for 549 ponies and 760ft-lb naturally aspirated. That jumps to 766hp and 919ft-lb with nitrous — all measured at the boots on C&M Performance’s dyno.

The car was put on the road in 2010, just before the Father’s Day Drags. Ian drove home from the vehicle testing station, put the car on the hoist and prepped it for racing. He came home with a 10.9@129mph pass from its first outing. 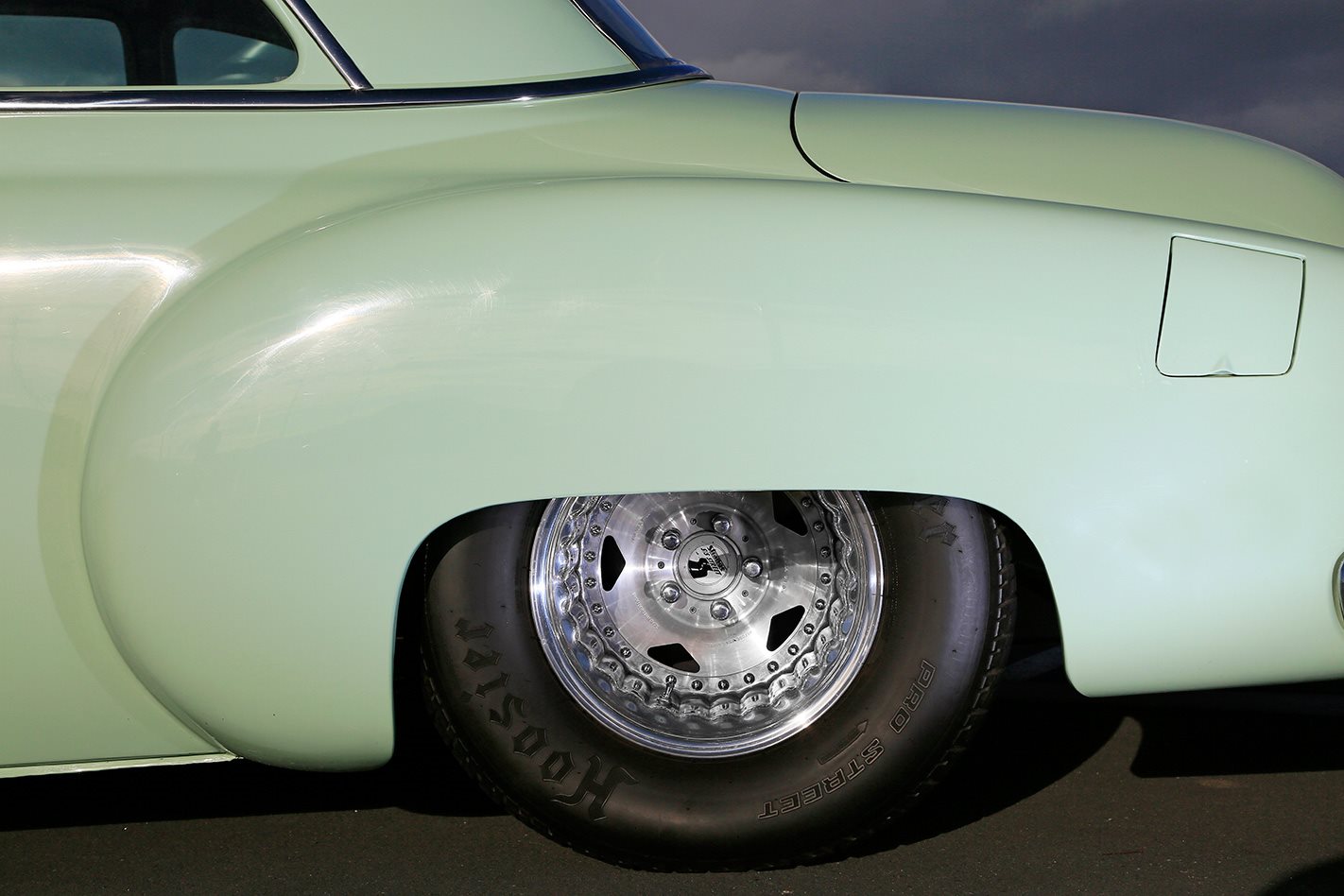 At the 2011 Nostalgia Drags, Ian won his class and ran a 10.00 but was questioned by officials for a race licence and a tech inspection due to the ET. It’d been built with a four-point ’cage, which had to be upgraded to a six-pointer. That done, at the 2013 Nostalgia Drags he ran 9.9@136mph.

“We’ve had a few problems with the nitrous each time, so I think there’s a bit more to come. Without nitrous the car has run a best of 10.3@135mph.” 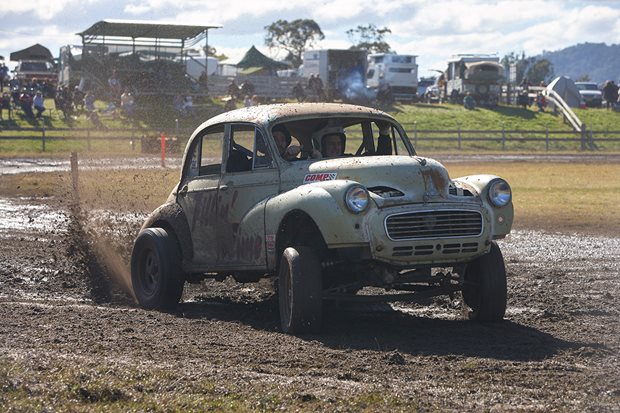 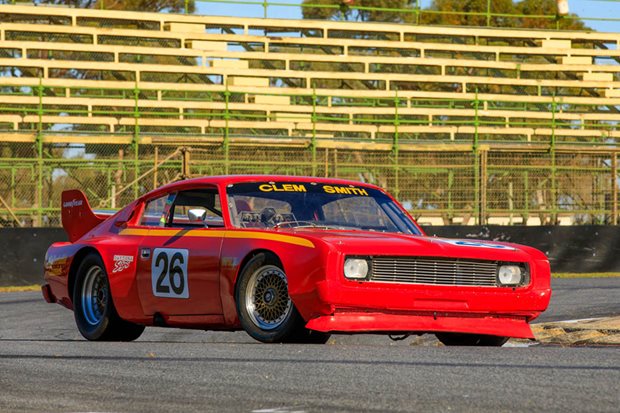 Our picks this week include a monster LandCruiser, an HK Monaro shed-find, and a surprisingly perfect VN Commodore 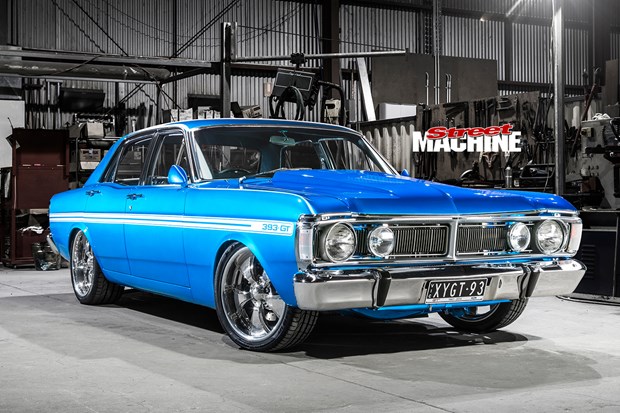