This load king is a wolf among sheep.

This article was originally published in the December 2004 issue of Street Machine.

Looking at the engine in Dwayne Gerdes’s HJ one-tonner, it’s easy to get confused — it certainly confused me. Look at the photos and you’ll notice a twin-turbo Chevy small-block with injection and all the gear, but look at the specs list and you find stock rods, cast crank and cast iron heads.

Dwayne laughs when I quiz him on the discrepancy. “Yeah, I didn’t want to bullshit what was in it. But this is really just an interim engine. You could say it was an engine I had sitting there and I thought I’d dummy it all together.” 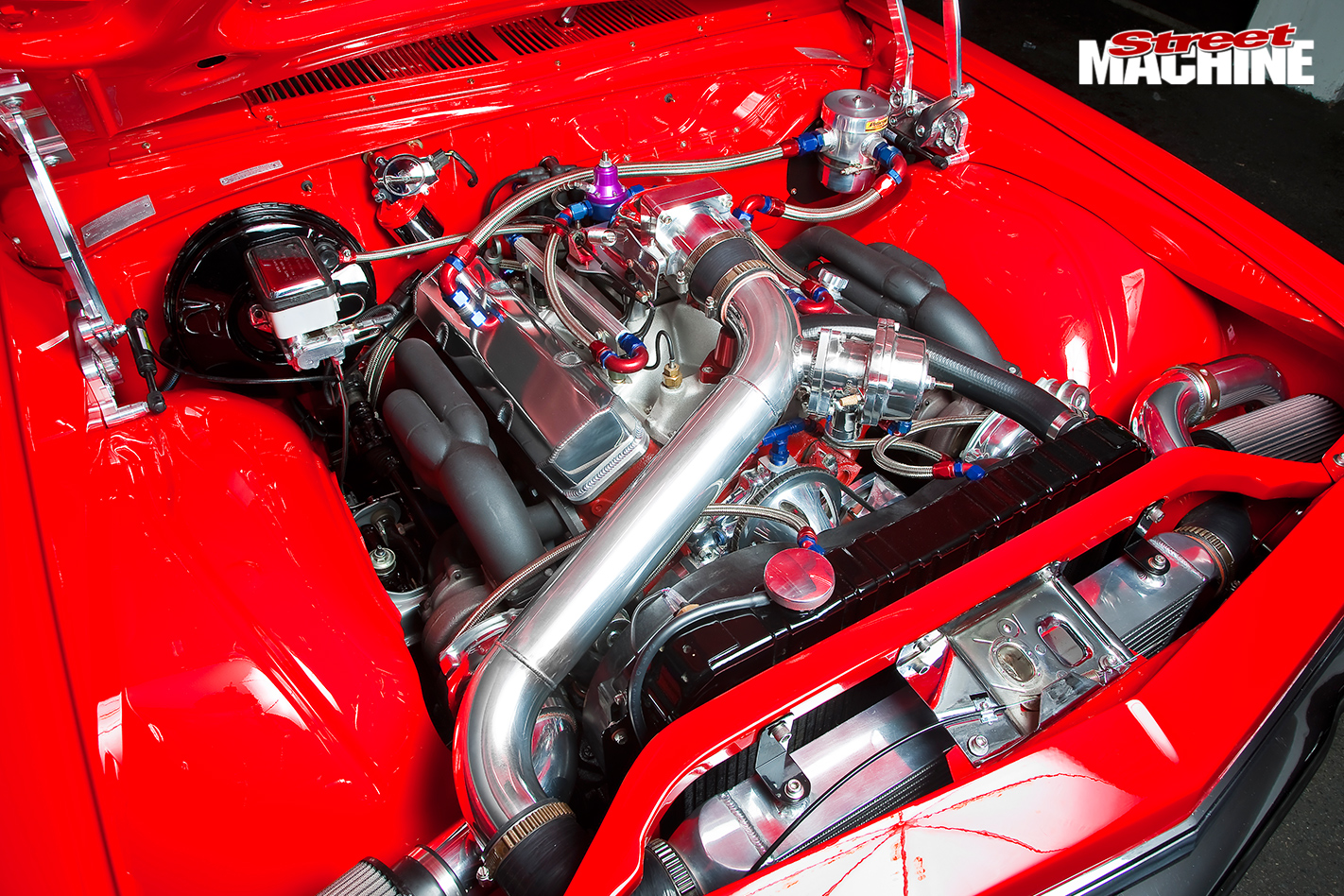 The mild Chev does seem like an unlikely powerplant, especially with a pair of snails hanging off the sides but as Dwayne says, it’s just there to prove the concept.

Up top he’s gone for an Edelbrock Victor EFI manifold and fuel-rail kit with Holley 1000cc injectors and a Wilson 80mm throttlebody on a 90-degree elbow. An Autronic SM4 ECU controls everything and there’s an ICE 7-amp ignition system to give the sparks a jolt.

LW Customs made the 316 stainless headers, which have been HPC-coated and support a pair of internally gated GT35/40 Garrett turbos. Dwayne did the rest of the alloy ’cooler piping himself. A 600x300mm intercooler keeps the intake charge temperature down, which is just as well because running 9.5:1 compression and 10psi boost in cast iron heads isn’t the best combination. Or as Dwayne admits: “It’s got a little too much comp in it.” 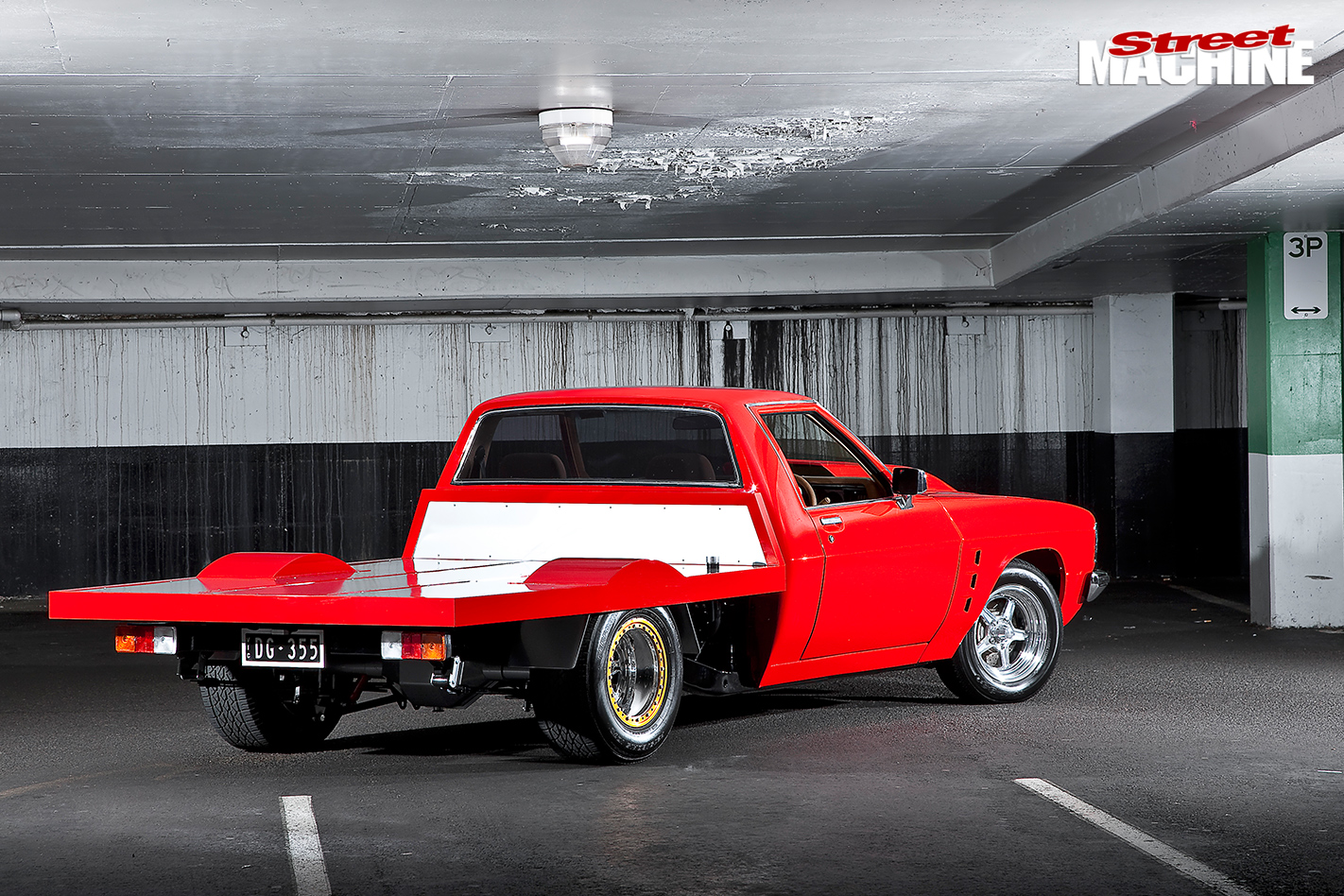 The real motor is a 406 stoker but that’s still sitting in the shed. “It’s got a Dart block, AFR heads and roller cam,” Dwayne says. With only road tuning under its belt he doesn’t know how much horsepower the current motor is producing but we’re betting it’s plenty healthy with 10psi boosting 350 cubes. But the big engine will have more — lots more. “I’m hoping the 406 will make 900 to 1000hp.”

Even then, the tonner is unlikely to find itself sitting on a dyno.

“I don’t like chassis dynos,” Dwayne says, “you drive it on the road, not on the dyno. I think that’s why it drives so well. I had Mark Goode tune it on the street and he’s just awesome. I could jump in it and drive it to Queensland.” 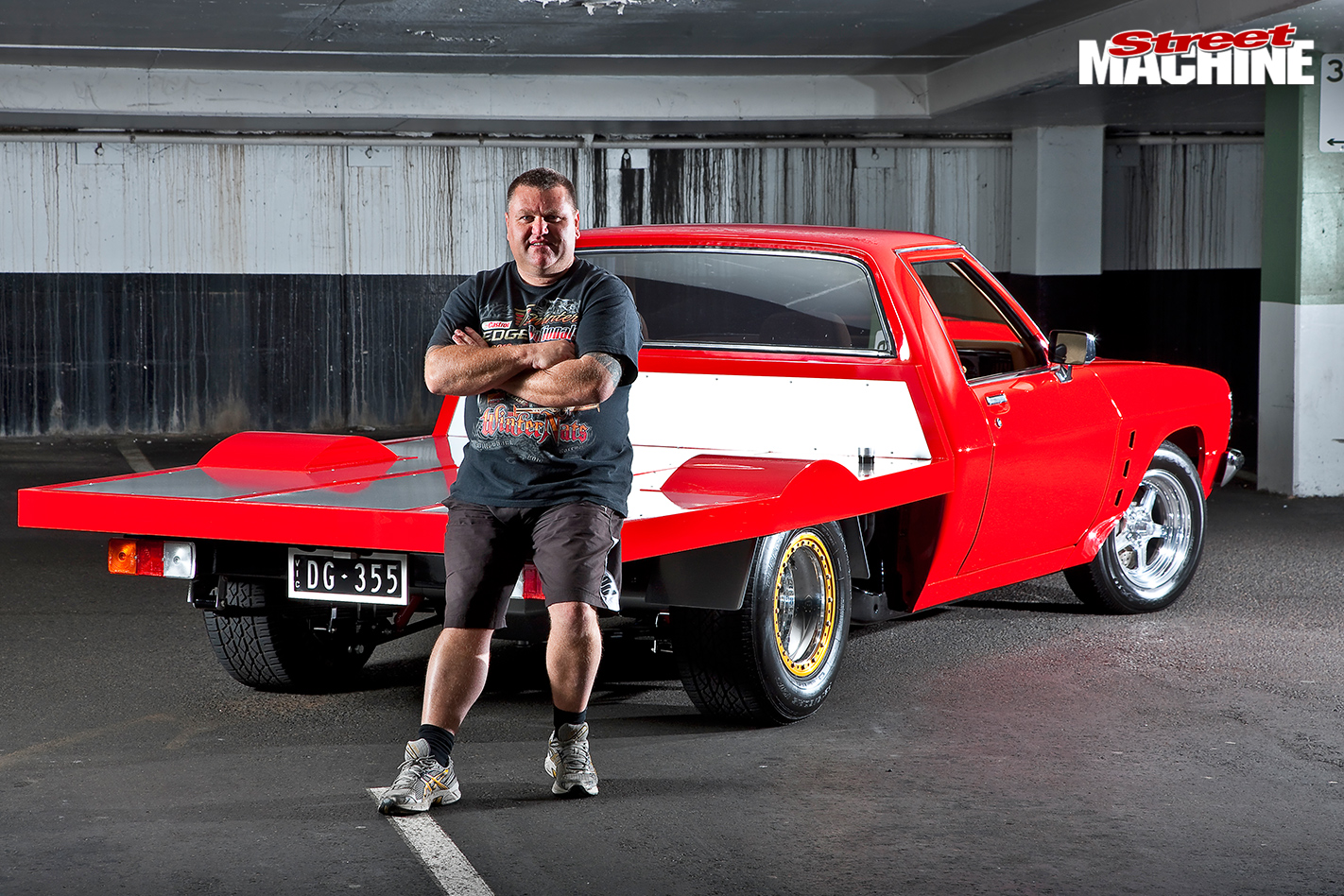 First and foremost, that’s what this tonner is about — driving. Dwayne loves racing but he’s got a tubbed big-block WB ute in the build for that. He just wanted this to be a cool car to drive and enjoy.

It wasn’t always that way.

Dwayne bought the tonner because it was the perfect tool for his day job stacking bricks and could serve double duty as a weekend tow rig for various bikes and boats.

“It was quite a nice car,” he says. “It was red with all the HZ gear. It was already a very neat  car, even when I bought it years ago.”

After Dwayne got out of bricklaying and went to work at TCE Converters, the tonner went through a few different incarnations. He reckons it’s had a couple of 308s under the bonnet over the years, culminating in a decent 355 Holden stroker which dragged the tray top down the quarter-mile dyno to a flat 12 at 113mph. 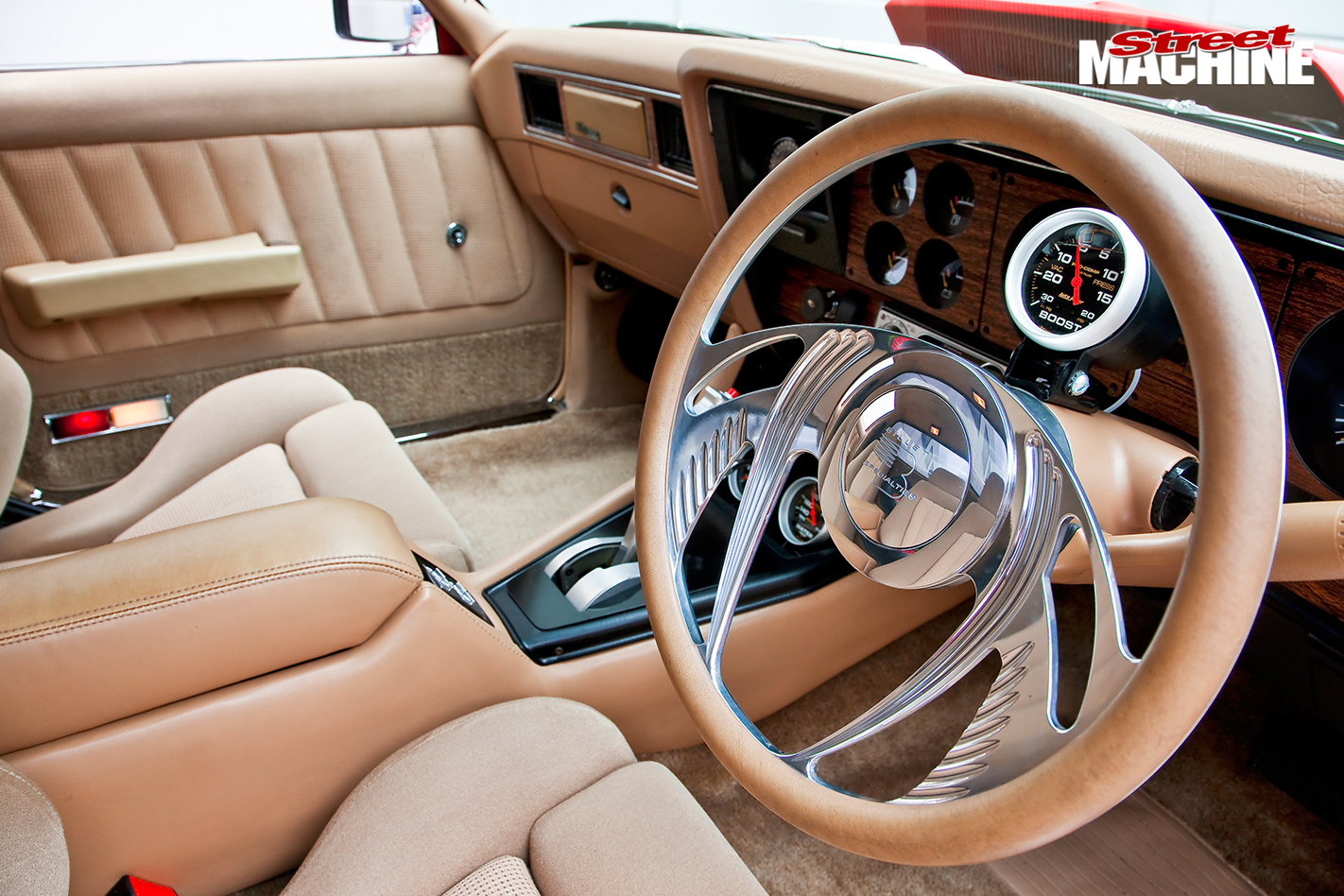 “I used to drive it there and drive it home and I didn’t even pull the air cleaner. It was fun to drive — it was reasonably fast.”

When they rebuilt the car for the 355 combo, Dwayne explains that they put a lot of effort into the bodywork and paint and that made things a hell of a lot easier this time around. Even so, nothing was left untouched in this latest build.

“We pretty much redid everything,” he says, “A full body-off-chassis job. People thought I was crazy because it was killer before I pulled it off the road and stripped it.”

It wasn’t just change for its own sake, however. Starting with such an excellent base allowed Dwayne to devote more time to the details and that’s where this ride really makes its impact. 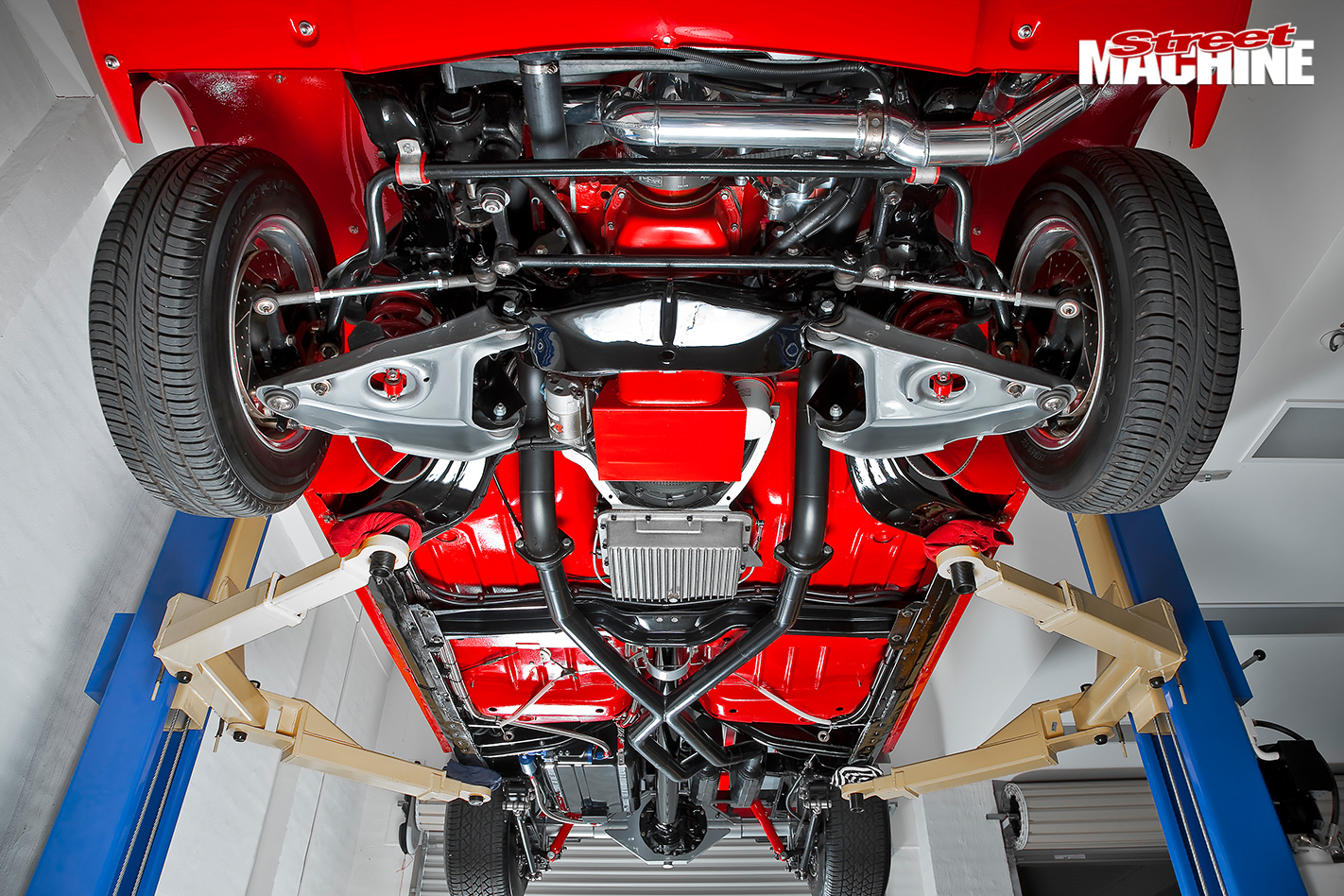 Check out the underside — it’s just spotless. Certainly no Holden ever left the factory looking this good. “It’s not to elite standards but we’ve made it a bit better than stock,” he says with more than a hint of understatement.

Rather than the straight red tinter he used for the previous build, this time he went with a coat of Rosso Corsa Red. Yep, that’s Ferrari red in case you couldn’t work it out, and it was applied by OJay’s Paintworks.

Up front the HJ draws a few different strings together, wearing an HZ Caprice front clip with GTS guards and a four-inch Alfa fibreglass reverse cowl on a steel bonnet. At the other end you’ll find a custom tray that Dwayne built. It tilts for cleaning and easy maintenance. 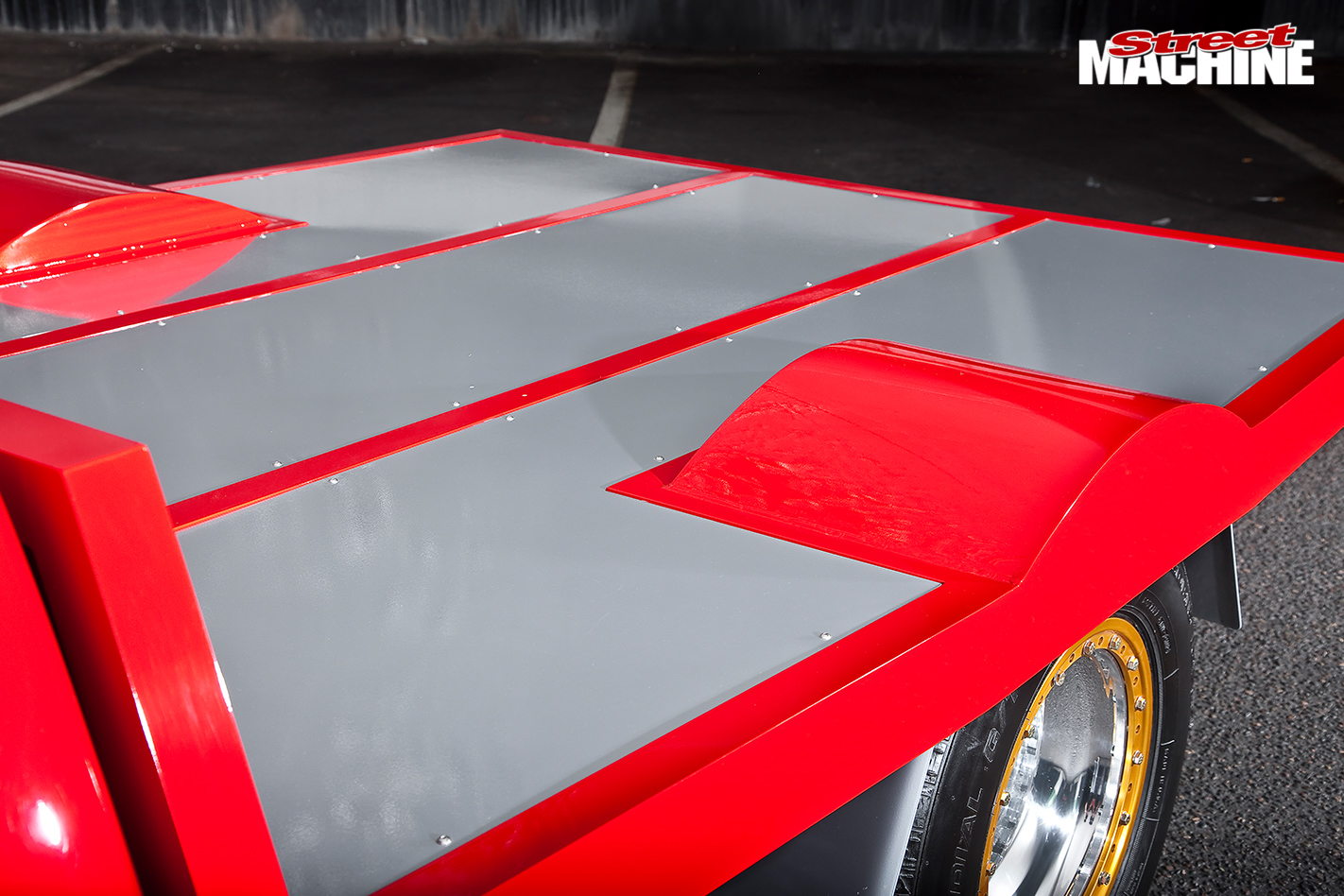 Below deck he’s gone for lowered leaf springs holding a Murray Anderson sheet-metal nine-inch and Caltracs to help with traction. The transmission is a Powerglide rebuilt to be tough enough for the twin-turbo donk and it’s filled with aftermarket gear, including a PTC transbrake.

Naturally there’s a TCE converter in the mix, packing a 10¼in ProRace 3800rpm unit to get things moving.

“This build took three and a half years to get where it is now,” Dwayne says, “but I’m very happy with how it’s turned out. It drives perfectly, it’s quiet and it’s got plenty of power. I really couldn’t ask for anything more.

“I’ve done about 1500km so far, so I do drive it quite a bit, but basically the plan is to drive it, enjoy it and maybe take it to a few cruise nights.”  s 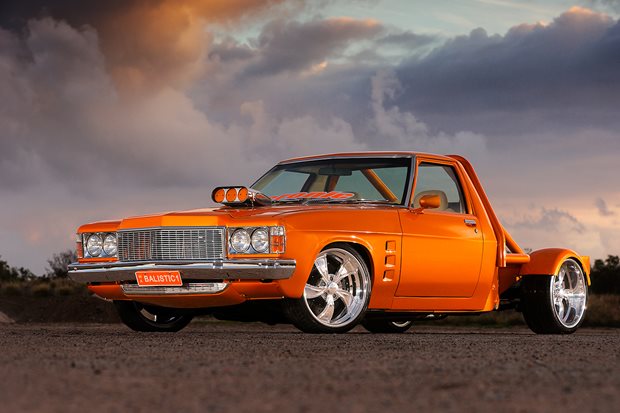 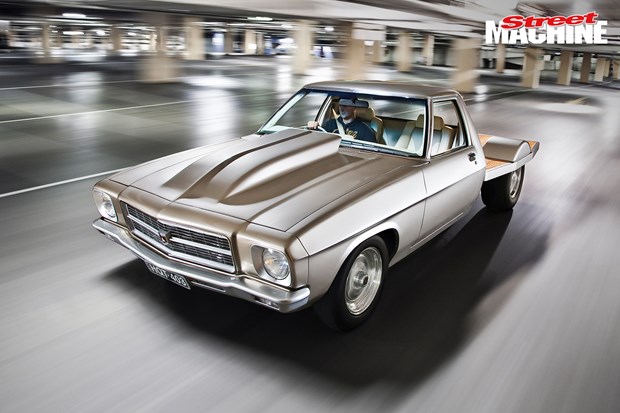 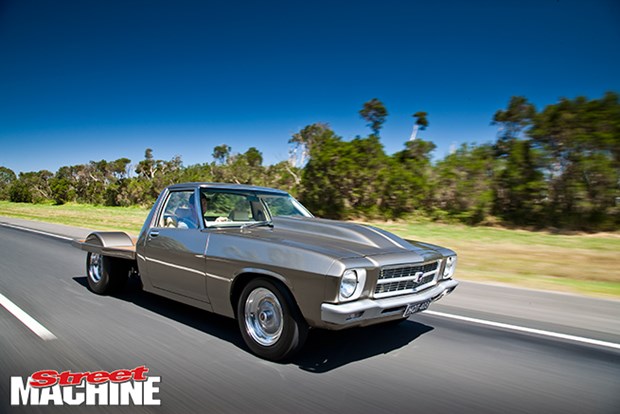