IN TERMS of engineering excellence alone, Ed Brodie’s black HJ sedan is unbelievable. Between its two billet number-plate frames is a sensational mix of the highest-quality street machining, hot rodding and aircraft engineering imaginable. And it’s all in a car that’s been built to drive hard and fast when its show days are over. It’s a potent blend that’s had crowds – and show judges absolutely awestruck wherever Ed’s taken it on show. 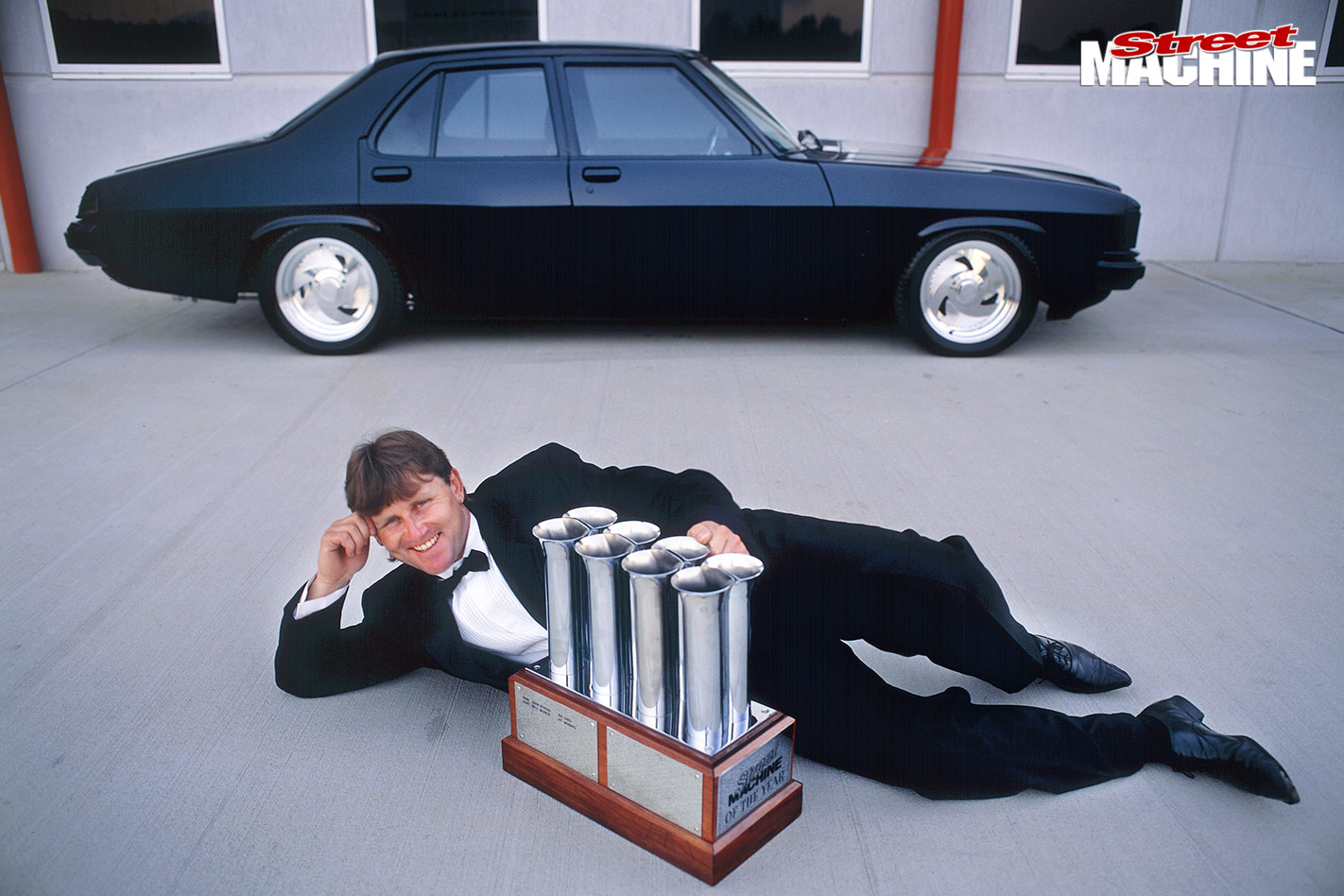 Take a good look at the detail on this car. It’s just incredible. Billet everywhere and detail you wouldn’t believe unless you saw it with your own eyes. Check out the undercarriage for starters – billet aluminium as far as the eye can see including the exhaust brackets, hubs and shocks, the Curry Enterprises aluminium nine-inch diff housing, the Wilwood calipers. And you’re still only a handspan from the blacktop with a long way to go.

Some of you may remember aeronautical engineer race-engine builder Ed’s more sedate HJ from the September 1993 issue of Street Machine. It was pretty damned good then. It’s bloody phenomenal now. No wonder this car has hauled a staggering 41 trophies in just five shows, including its Summernats 10 debut, where Ed walked away with a cool seven. 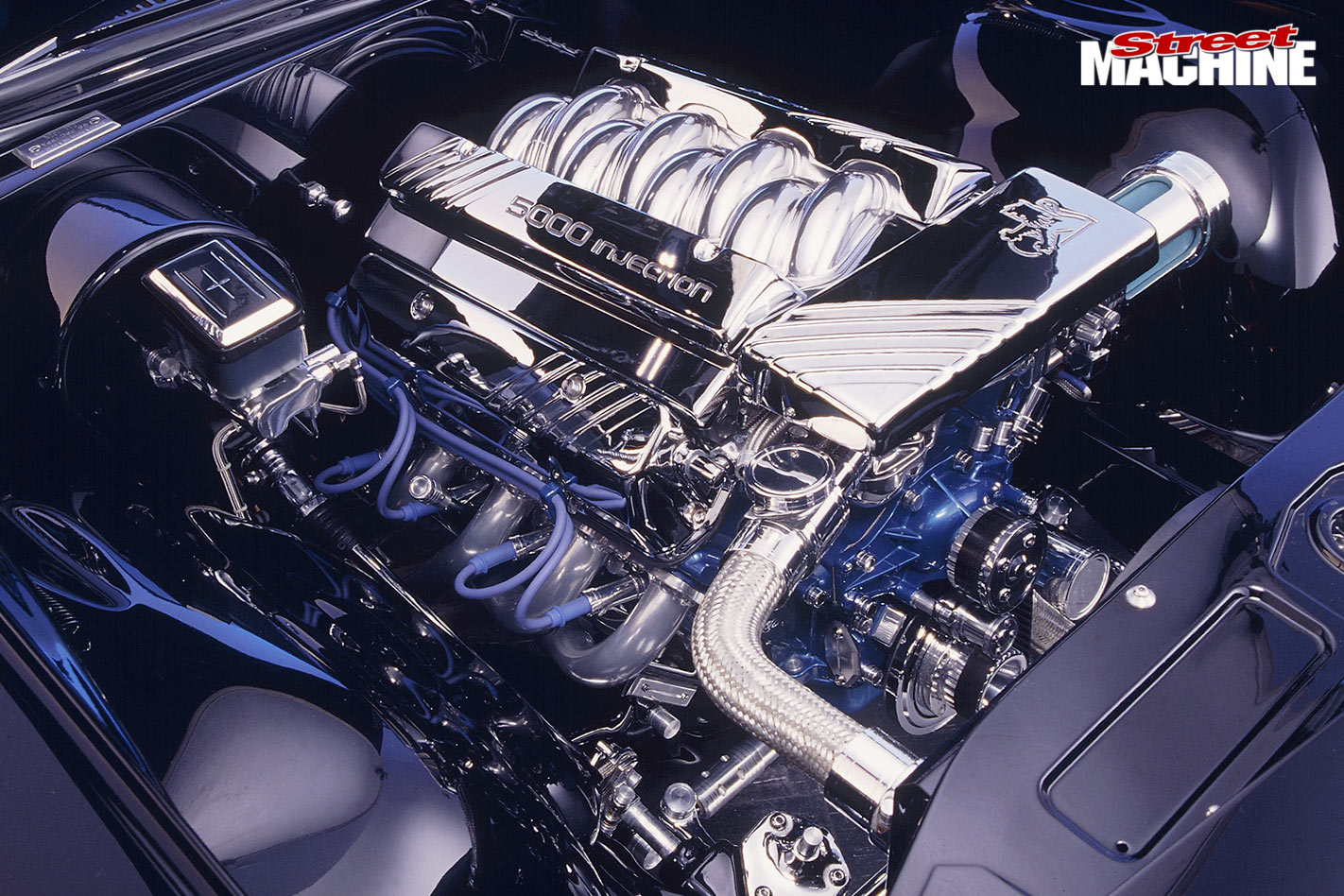 Ed’s car gleams everywhere – and that’s as true of the internals. Its injected 304 has all the fruit and then some

Pop the bonnet and stand back. In fact, make sure you’re well balanced when you do, because the effect on the naked eye can be overwhelming. It’s dynamite under there. The injected five-litre Holden V8 is magnificent and the total impact of the surgery-clean engine bay is a knockout with billet stuff everywhere. Even the air cleaner gets its own billet cage.

They’re just the parts of this car you can see. What you can’t see are things such as the concealed front suspension, fuel tank, filler point and fuel lines. Also involved in the disappearing act are the four-core radiator, brake lines, handbrake cables, all seams from the firewall to the beaver panel, wiring, the transmission dipstick, the alternator. And every bolt on the car is hidden under its own machined cap. There’s hundreds of them. 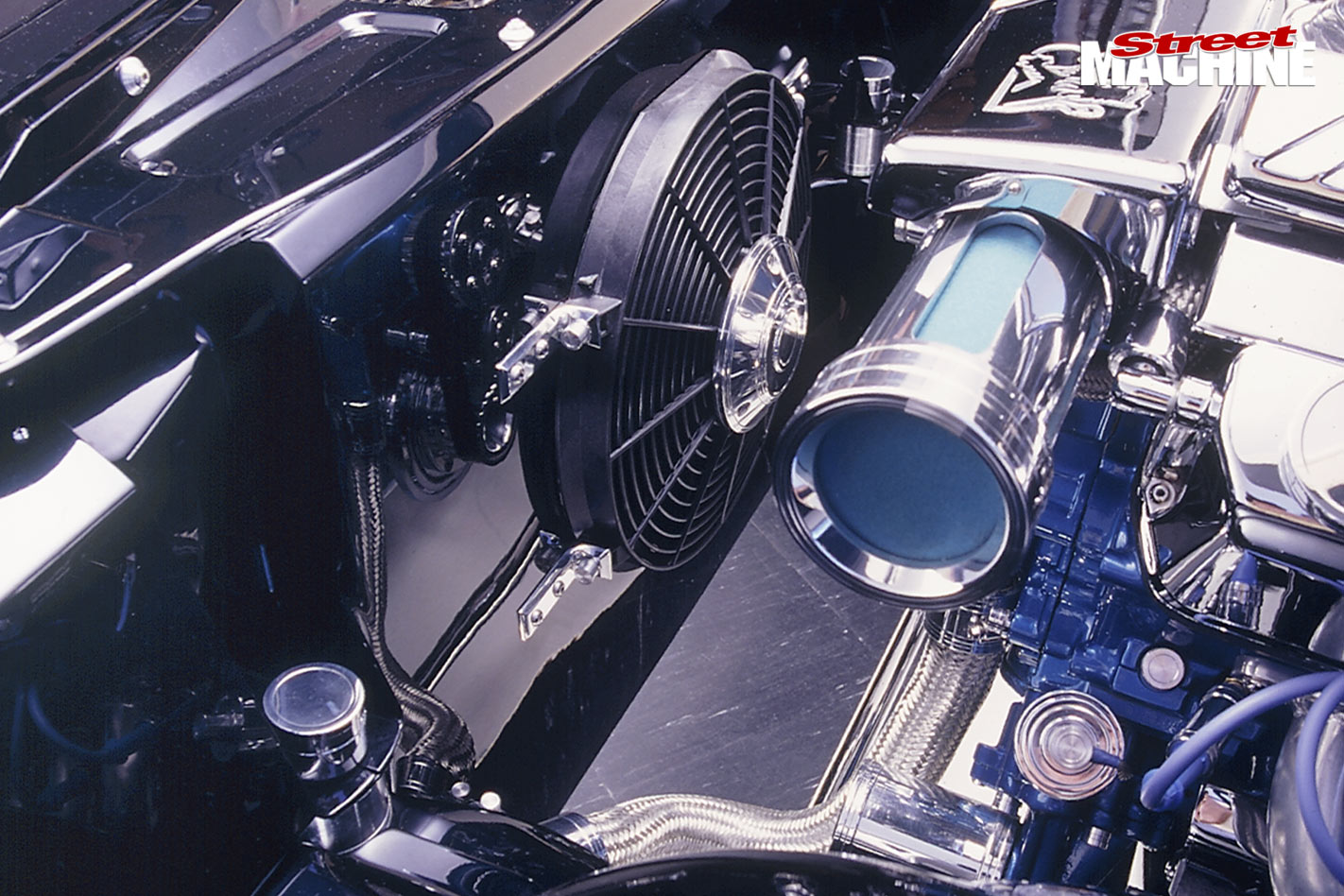 Just to melt your mind further, the alternator (it’s under the dash, by the way) is hydraulically powered, using auto transmission fluid to drive a small motor that spins the alternator, then returned the fluid to the transmission cooler. Impressed? And you haven’t even popped one of those doors that slide open and shut better than a Rolls-Royce’s.

“I was never completely happy with the original build, so when I finished showing it in 1994 I started again,” Ed says. “I wanted a car that was the ultimate in detail but in a balanced concept overall. And I wanted it planned from the beginning, not rushed.” 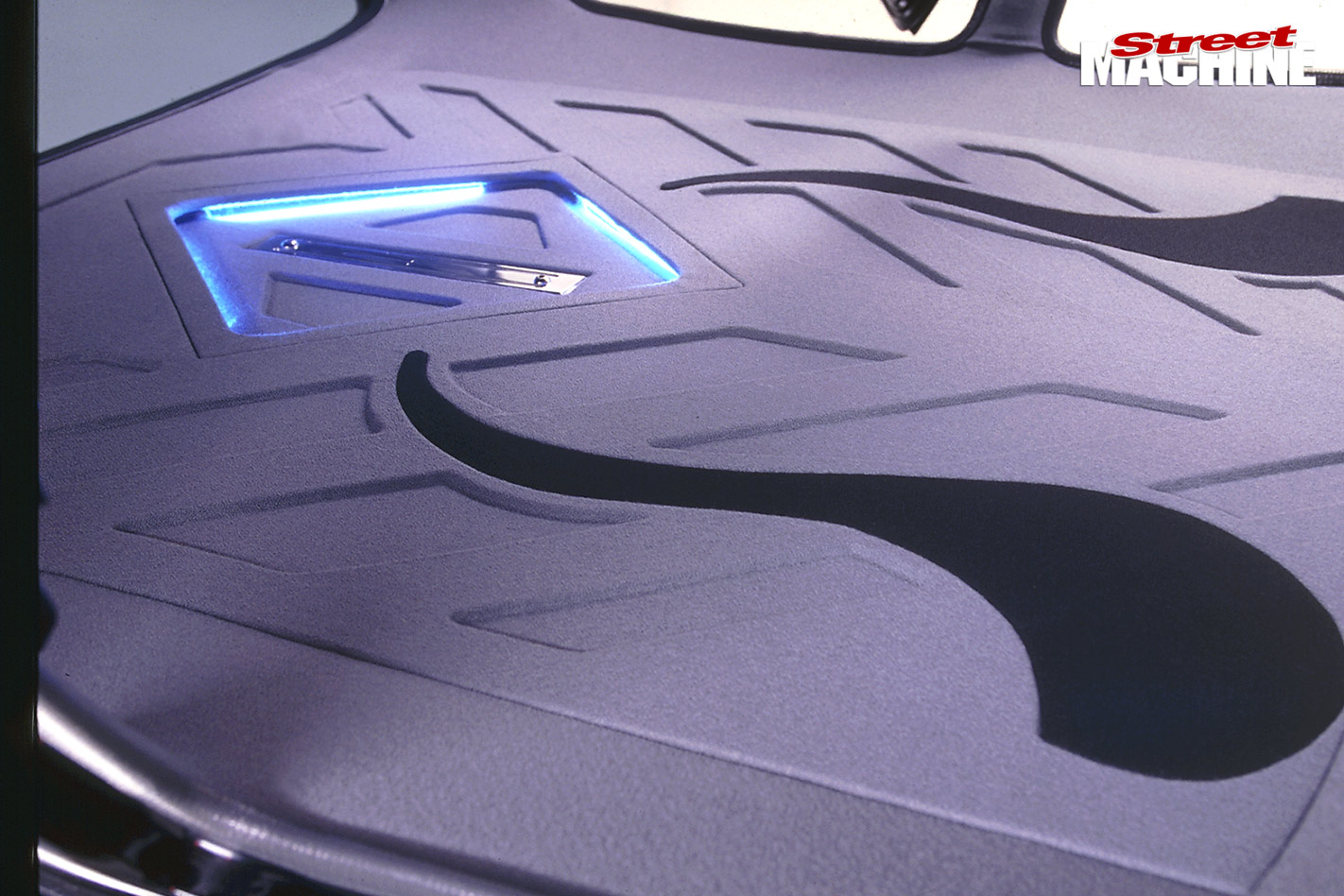 The planning involved a stack of drawings in which Ed redesigned every little bit, piece by piece. It also involved another HJ sedan that Ed used as a template: chopping, cutting and changing before he copied it on the real thing.

Ed also worked out what show judges look for, wherever possible incorporating pointscoring initiatives into his own concepts. “I wanted the car to reflect all my own views, but I also wanted it to win trophies.” 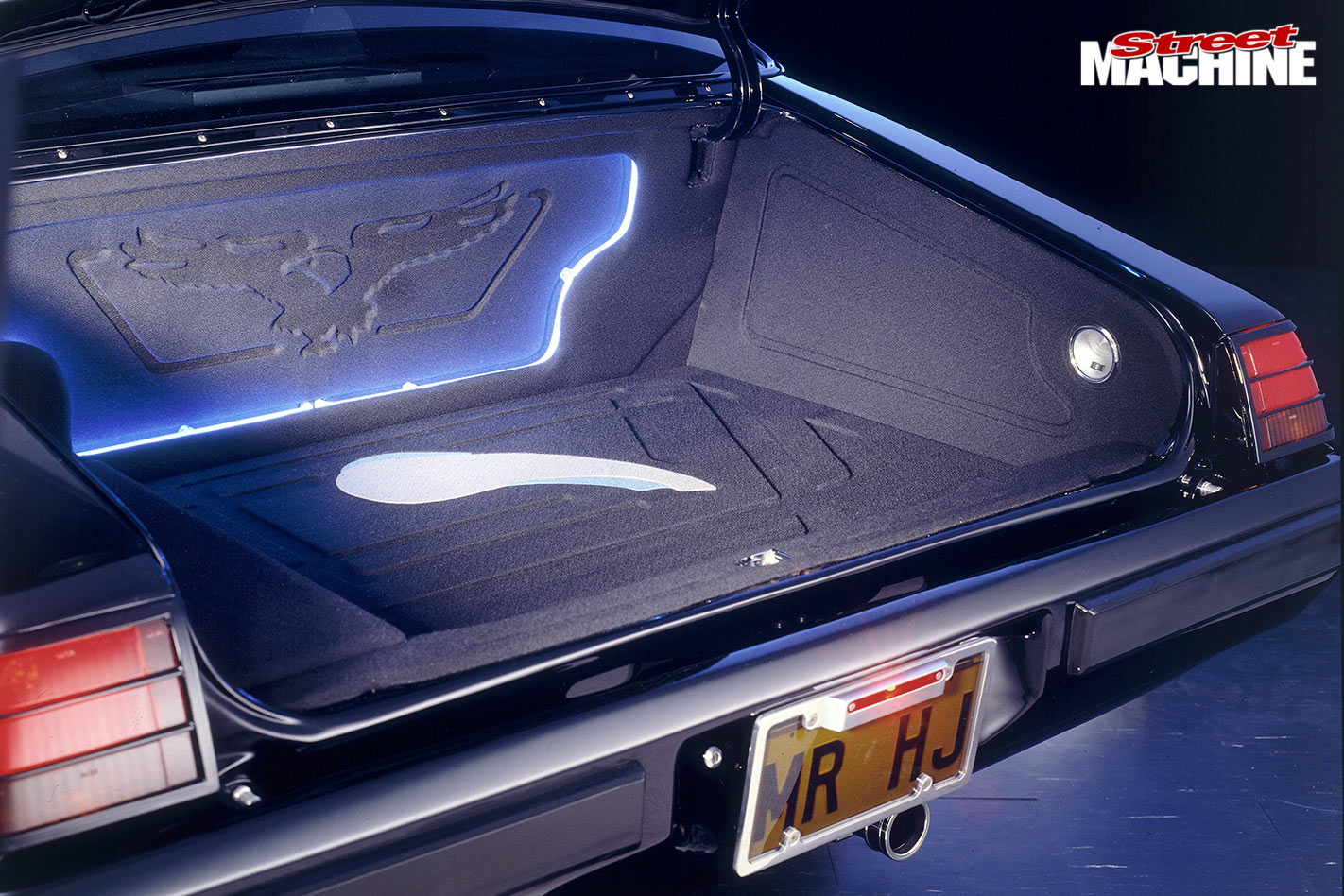 With heaps of help from his father Bill, Ed cut out the original floor, the firewall and the boot and built a space-frame out of 65x20mm steel box section. “Because of the way the sill is designed, we cut the internal floor and raised it half an inch to give the car a lower stance,” he says. “That gave us enough clearance to have one smooth, flat-panel underfloor from the front of the subfloor to the rear.”

Ed went to the USA four times during the build, picking up a mountain of goodies in the process. Stuff like the Curry Enterprises alloy diff housing running 4.56 Strange gears and a Mark Williams mini spool, the Wilwood discs and four spots, the vintage thermo fan, the Dakota digital instruments and, of course, the 16x8 Billet Specialty wheels and matching steering wheel that are the inspiration for the interior. 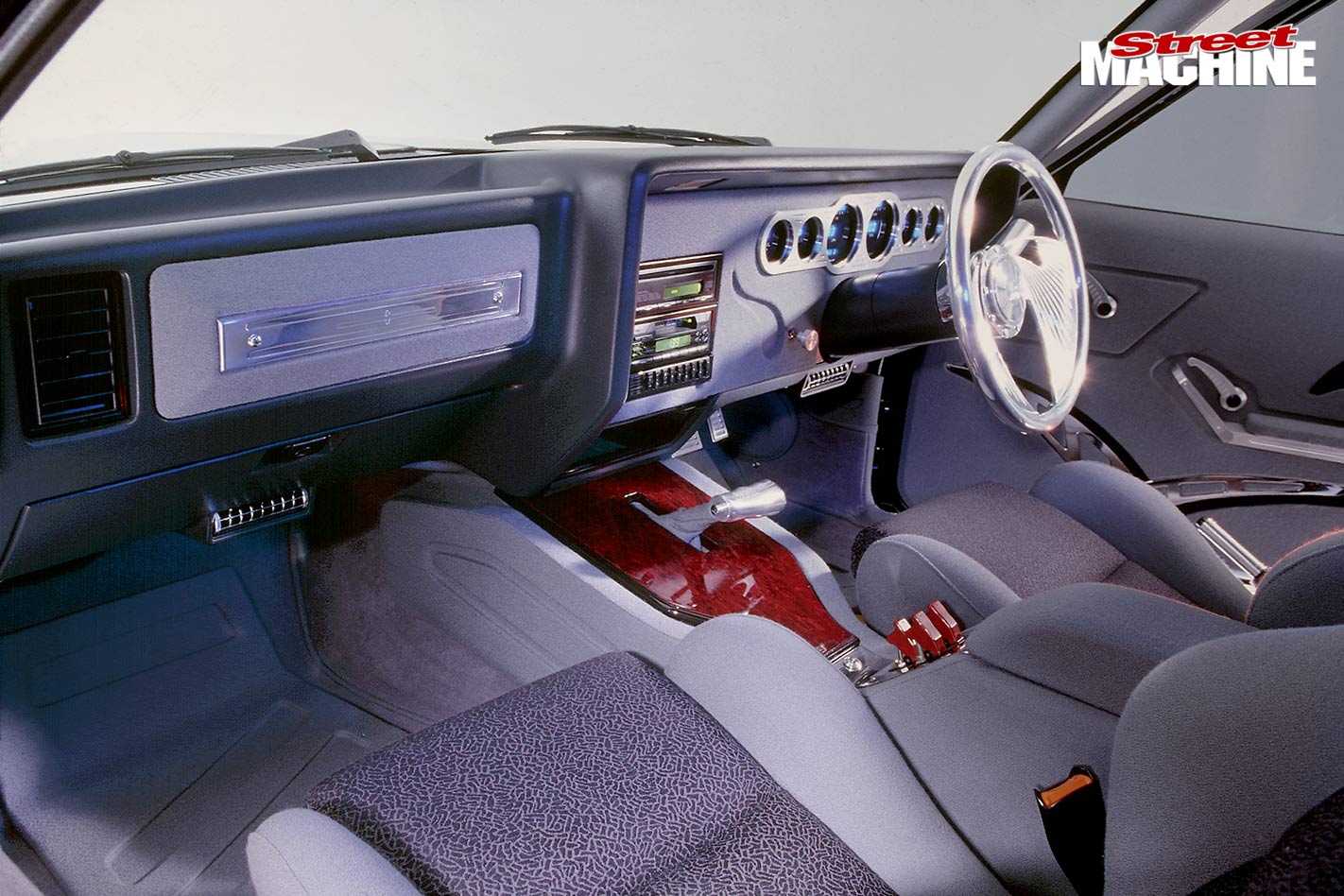 Almost everything else is fabricated. Ed’s done most of the billet stuff, with mate Al McDonald and fellow aircraft designer John Goode. “John was the main man,” Ed says. “He has a machine shop at home and I don’t mind saying he’s one of the best machinists I’ve seen. He’s incredible.” 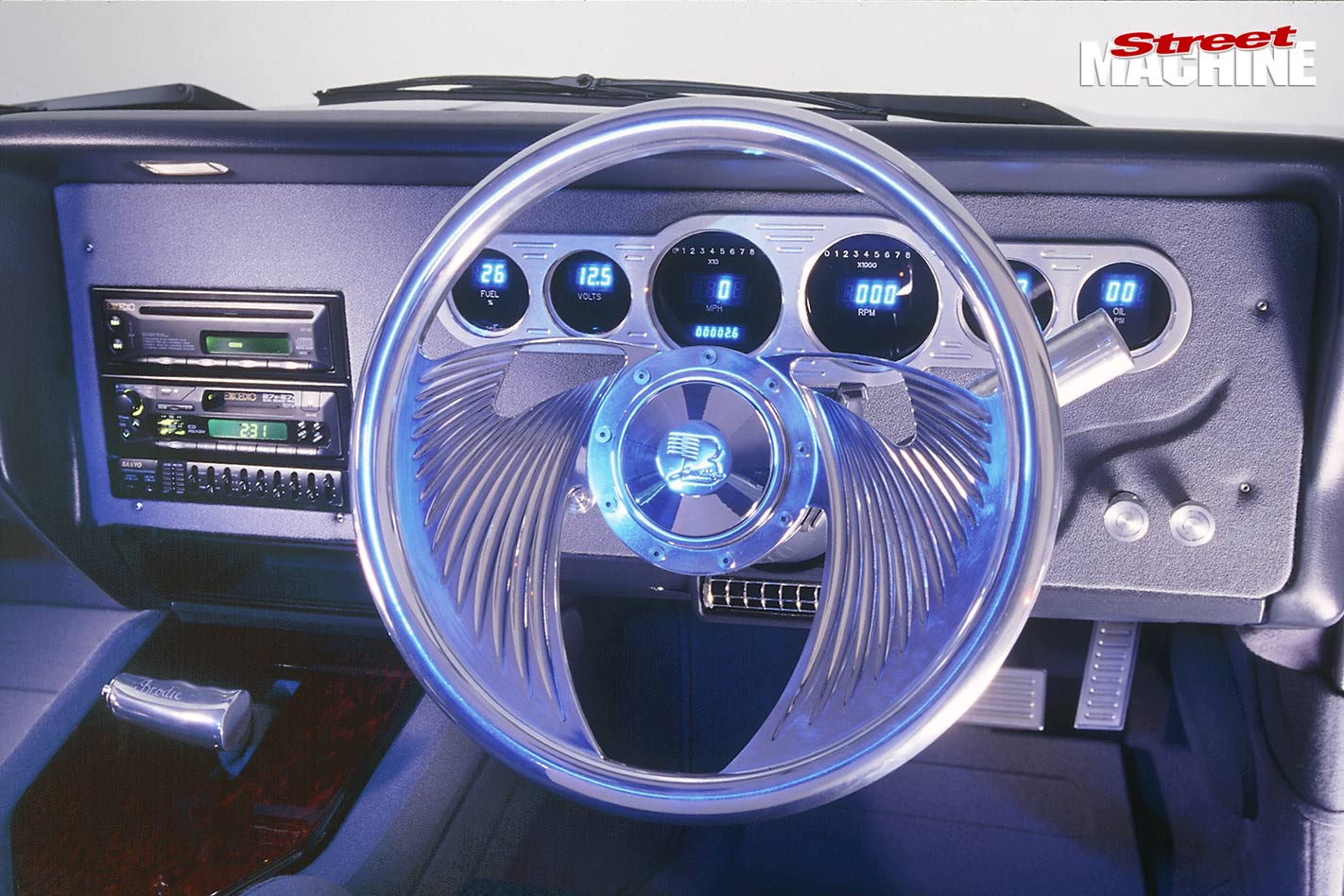 The razor-sharp body is the work of Mario Thomas and Mathew Benson, while Chris Bissaker of Unique Spray Painting, at Eastern Creek, handled the black and blue pearl Spartan paint. Inside, the wing thing extends to everything; the billet door handles, winders and trim inserts. Apart from trimming the Senator-style seats, Blacktown’s Peppers carried over the wing motif to the stampings in the trim and headlining. Ed’s even integrated a solar panel into the parcel shelf that trickle-charges the battery. 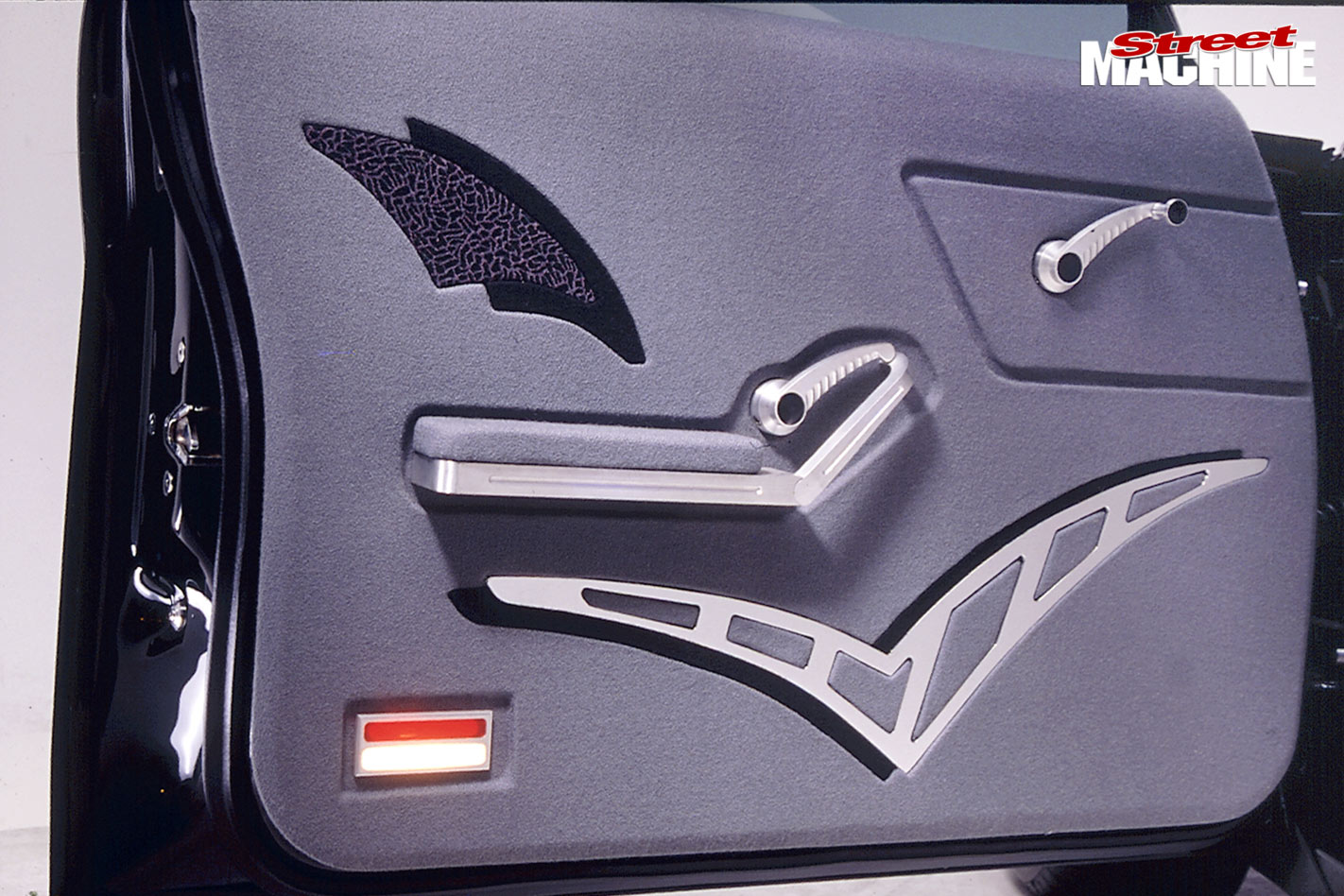 “It’s all part of the high-tech image I wanted,” Ed says. “But I also wanted the car to remain an HJ – the four-door sedan we know best.”

No HJ ever had an engine like this one, however. “A lot of people say the car looks nice and the detail blows them away,” Ed says. “But it’s something else again when you hear it running. It has a big converter, it has a big-comp engine and 4.56 ratio diff. It gets with it.” 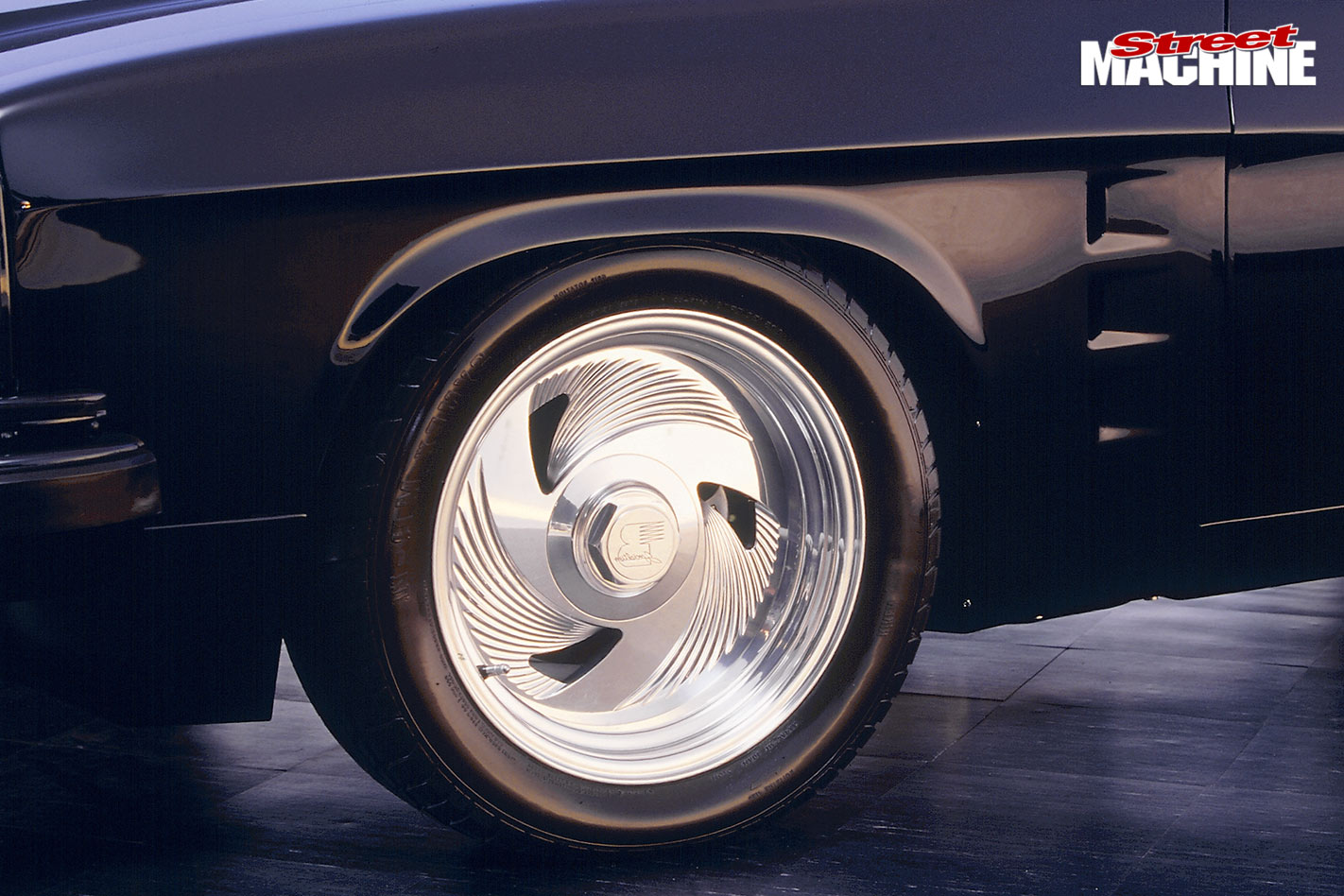 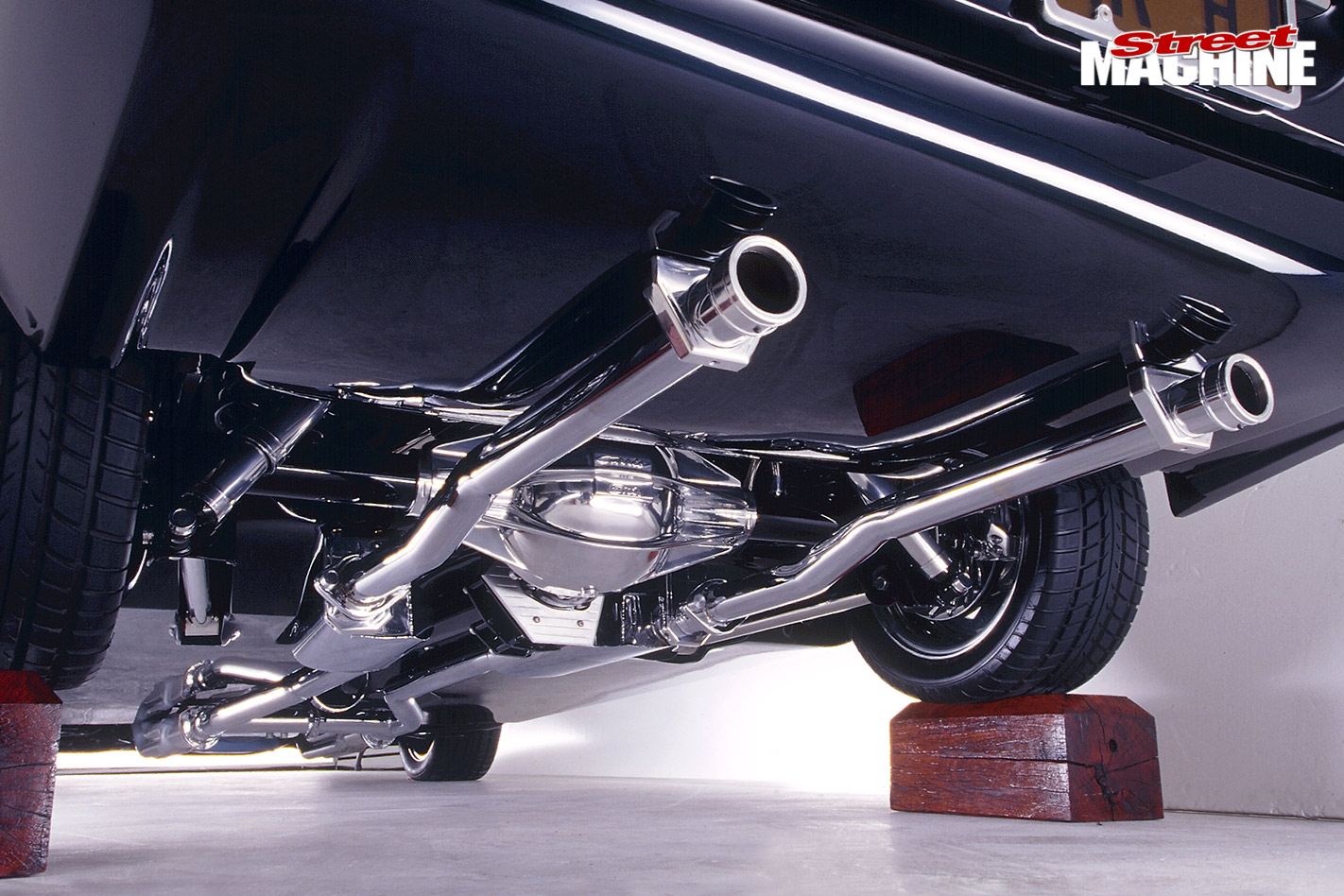 Vince’s Advanced Transmissions set up the Powerglide as a full manual with a Transgo shift kit and a Kayver 4000rpm converter. “The car feels great to drive,” Ed says. “It’s like a brand new car, tight and it’s got some stick, no doubt about that. I don’t think I’ll ever race it, there’s too much work on the undercarriage. But I’ll drive it on the street.” 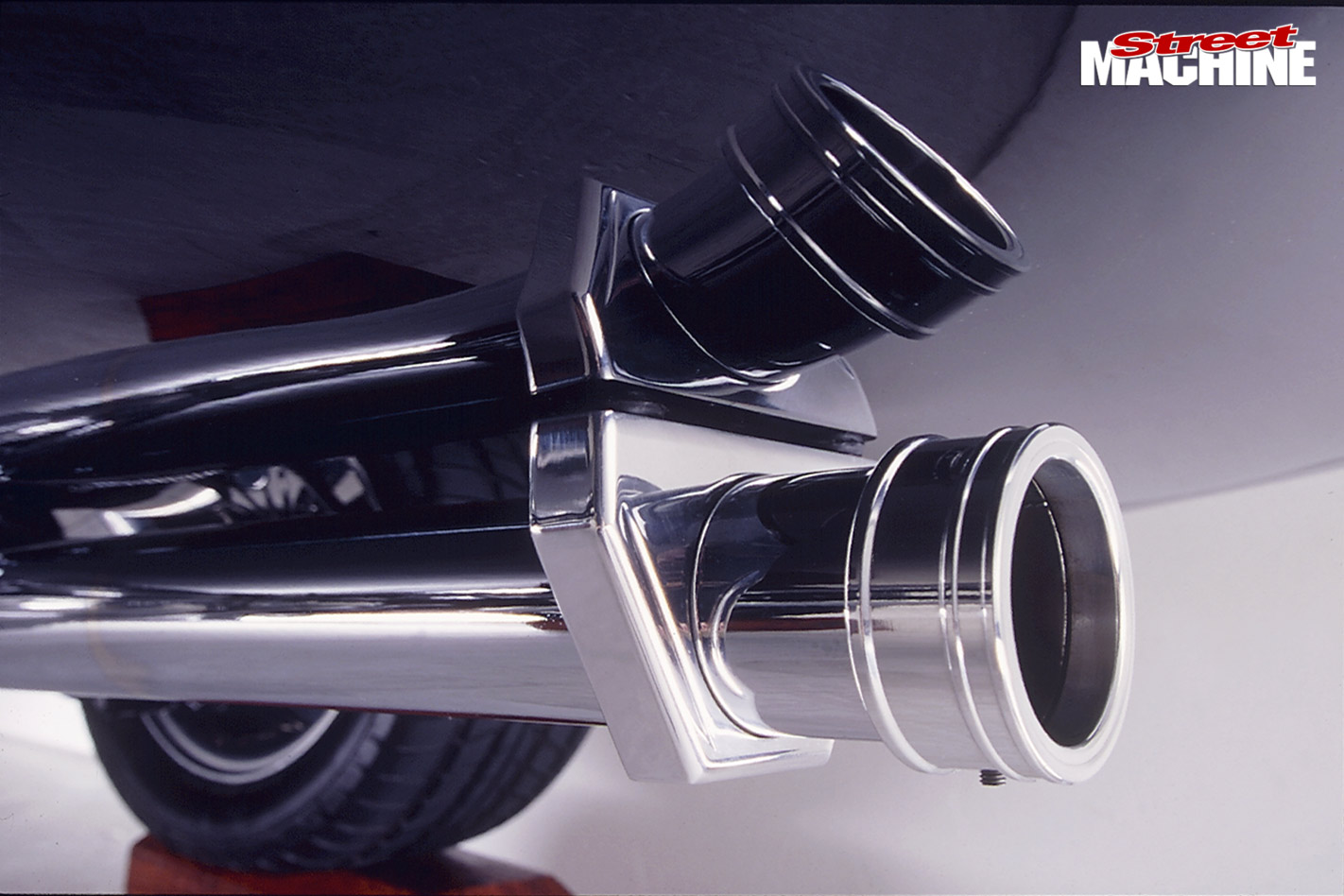 There’s plenty that’s unique about Ed’s car; the over-under exhaust is just the tip of it

At Summernats 10, Ed’s HJ claimed highest-ever judged pointscore. And now Ed has taken his car off the road to rebuild it again. “It’s going to be better than ever,” he says. “I’ve got a lot of little things to go on it that will make it that much different. I’m looking forward to cruising Canberra in it, too.” So are we, Ed. 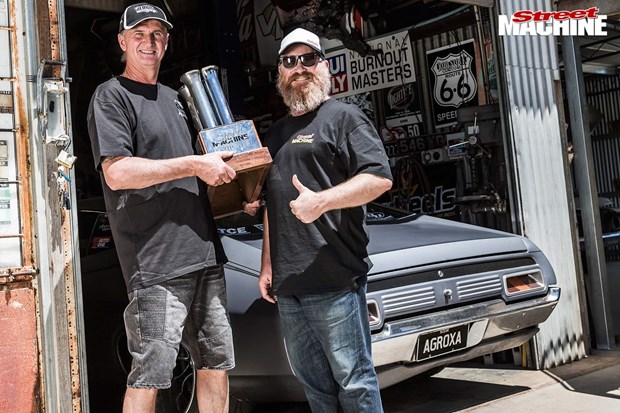 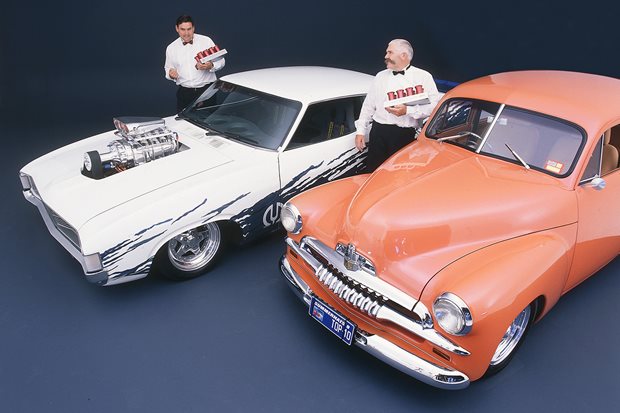 The Street Machine Of The Year hall of fame 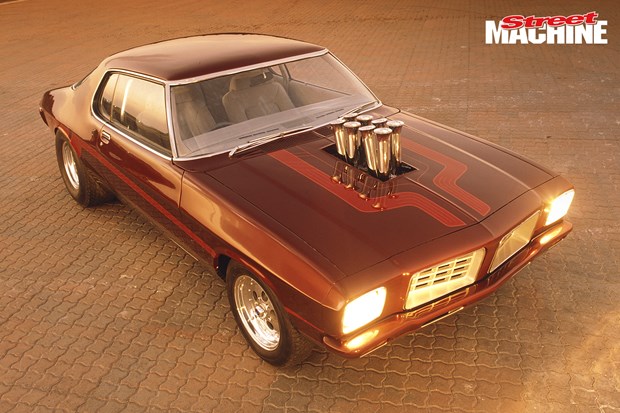 We’re revisiting all the winners from the glorious past. The second-ever SMOTY winner, back in 1989, was Dave Bennett’s monstrous HQ Monaro