BY THE time the EH was released in August 1963, Holden had already sold more than a million vehicles since it started production in 1948. It was the clear market leader but the EH stepped up to become one of the most successful cars Holden ever built, with more than 256,959 units produced. The HQ sold more, with 425,576, but the EH did its thing in just 18 months, compared to 40 months for the HQ.

While the EH was an update on its EJ predecessor, body-wise it was a much more involved upgrade than the FX/FJ, FE/FC and FB/EK updates that came before it, with the roof, rear quarters, boot and front guards all changed over the curvier EJ, producing a tougher, more masculine design.

The centrepiece of the EH was the debut of the red six-cylinder, available in 149 and 179ci capacities. Vastly superior to the venerable grey six it replaced, the red motor allowed Holden to get back into the power race against the Falcon and Valiant, with significantly improved acceleration and top speed over the EJ. 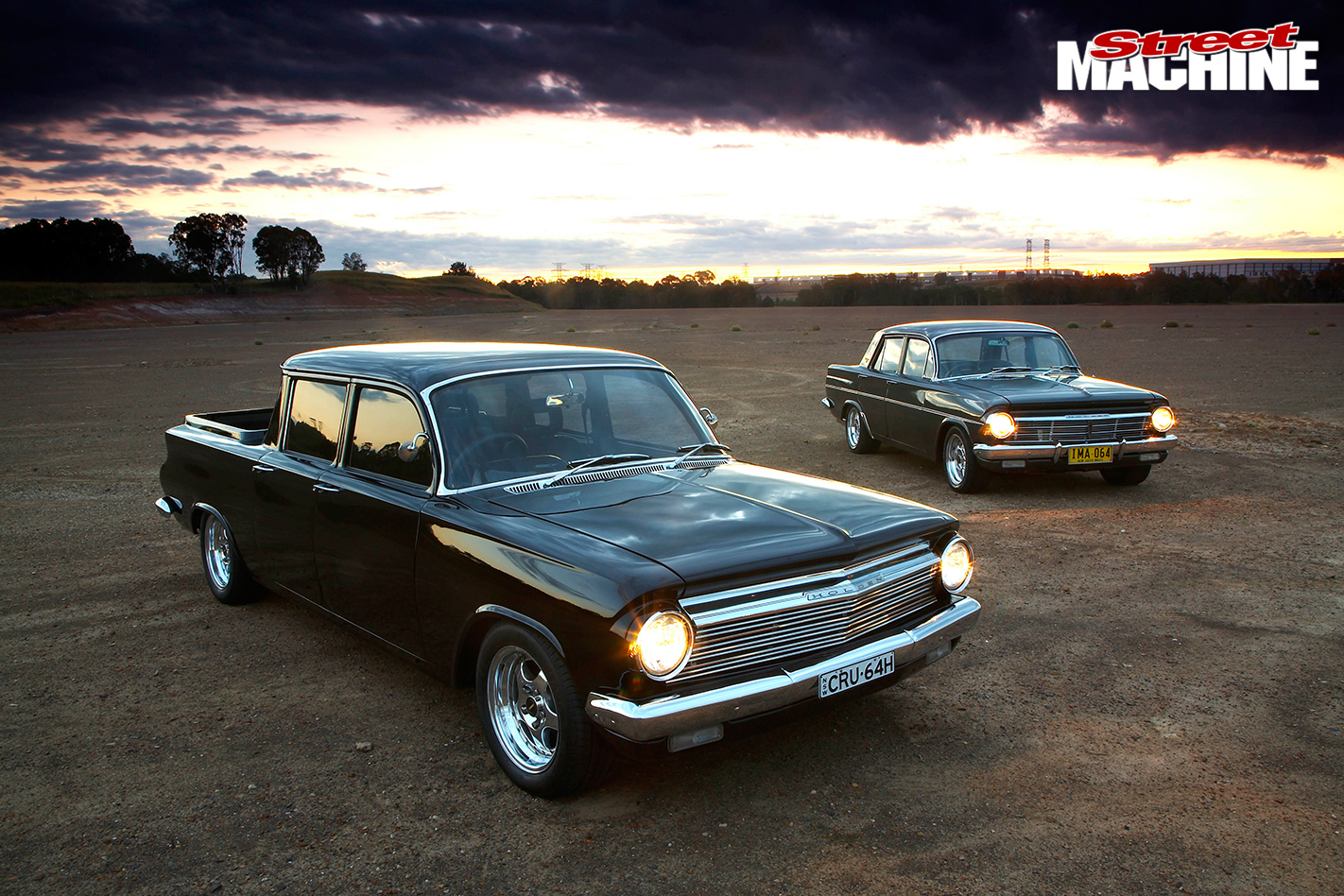 While other upgrades such as disc brakes, four-speed gearboxes, ball-joint front ends and a decent automatic came after the EH, the combination of handsome styling, red motor power and a good size made the EH a favourite long after it went off sale. And the relative failure of the HD that followed it only enhanced its reputation.

The EH also marked the first toe in the water for Holden in homologating a car for racing, with the 120 mildly upgraded S4 EHs built to qualify for the 1963 Armstrong 500. Ralph Sach and Fred Morgan took an S4 to second place outright that year.

From there, the EH became a favourite with racers, not only on circuits, but also speedway and drags.

Quite a few EHs copped the custom treatment in the late 60s and early 70s, but it was the van and later street machine movements that embraced the EH wholeheartedly. We’ve featured a ton of them over our 32 years, with Adam Le Brese’s sedan delivery version not only winning SMOTY in 2003 but also being voted as the Ultimate Street Machine of All Time for our 30th anniversary issue — a fitting tribute to the EH’s lasting popularity.

EHs in Street Machine have covered almost every genre, with Pro Street, mild custom, retrotech and restorod versions proving popular. Here’s a handful of the best of them. 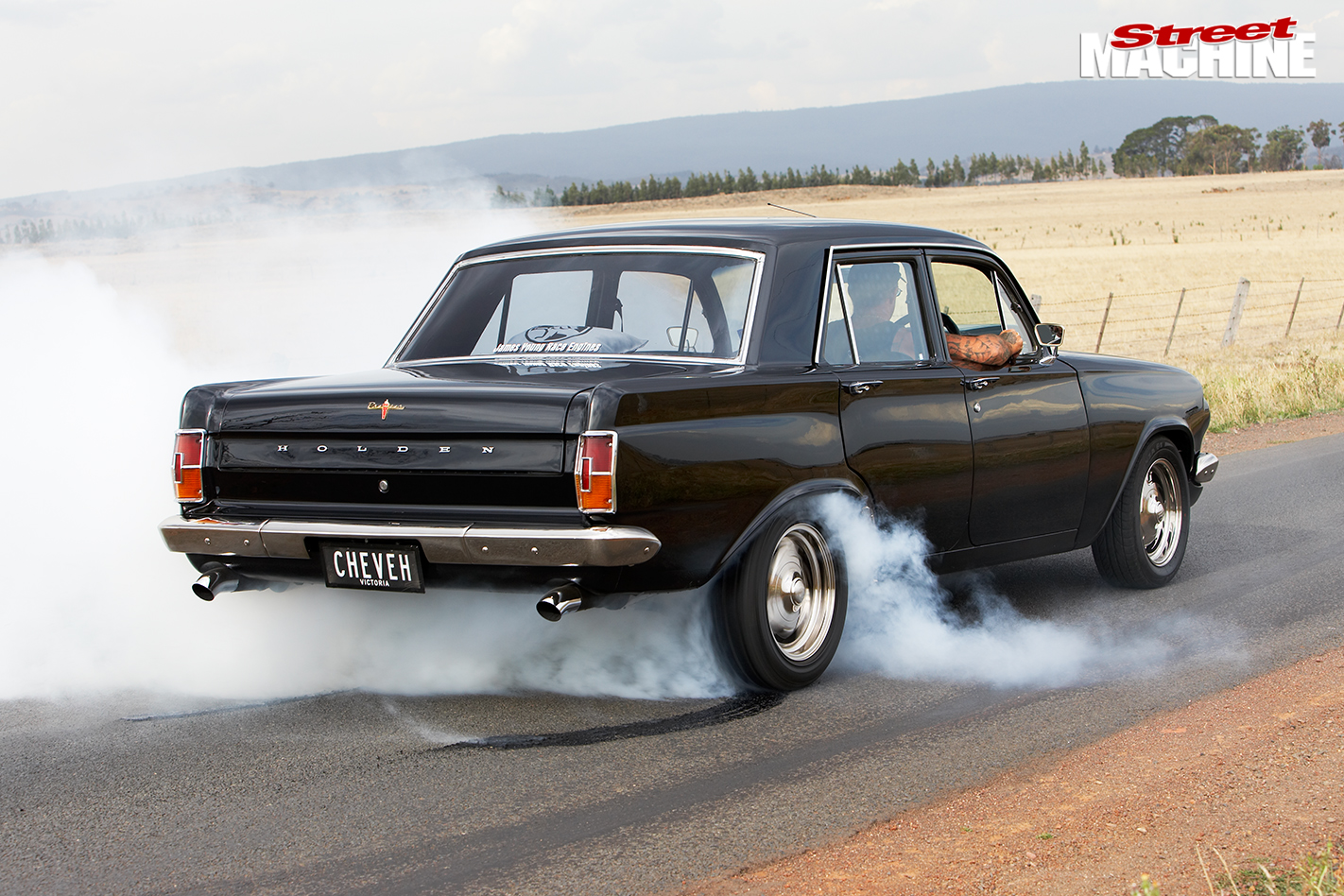 Les Baldi — July 2007
When we featured Les’s EH it was already plenty tough, with a 420ci small-block shredding the 225 Bridgies with ease. The very next issue, we covered a four-link upgrade on the car, ahead of a twin-turbo conversion that sent it into the stratosphere 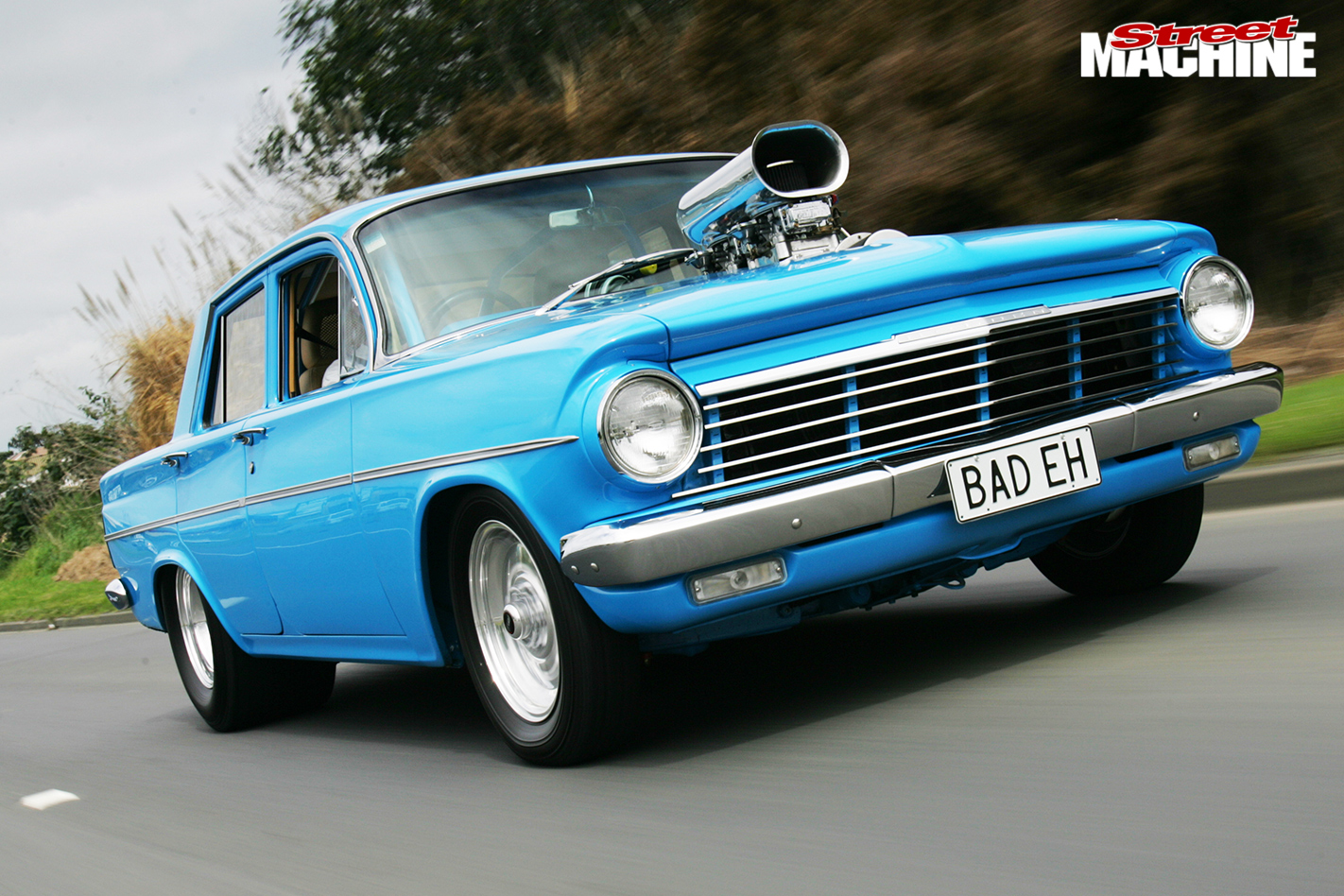 Allan Norris — Jan 2005
Allan Norris  took advantage of New Zealand’s liberal rego laws to create a show-stopping, strip-storming Pro Street weapon. It’s so staunch that he drove it 3000km from Auckland to Christchurch to debut it at Muscle Car Madness in 2004! 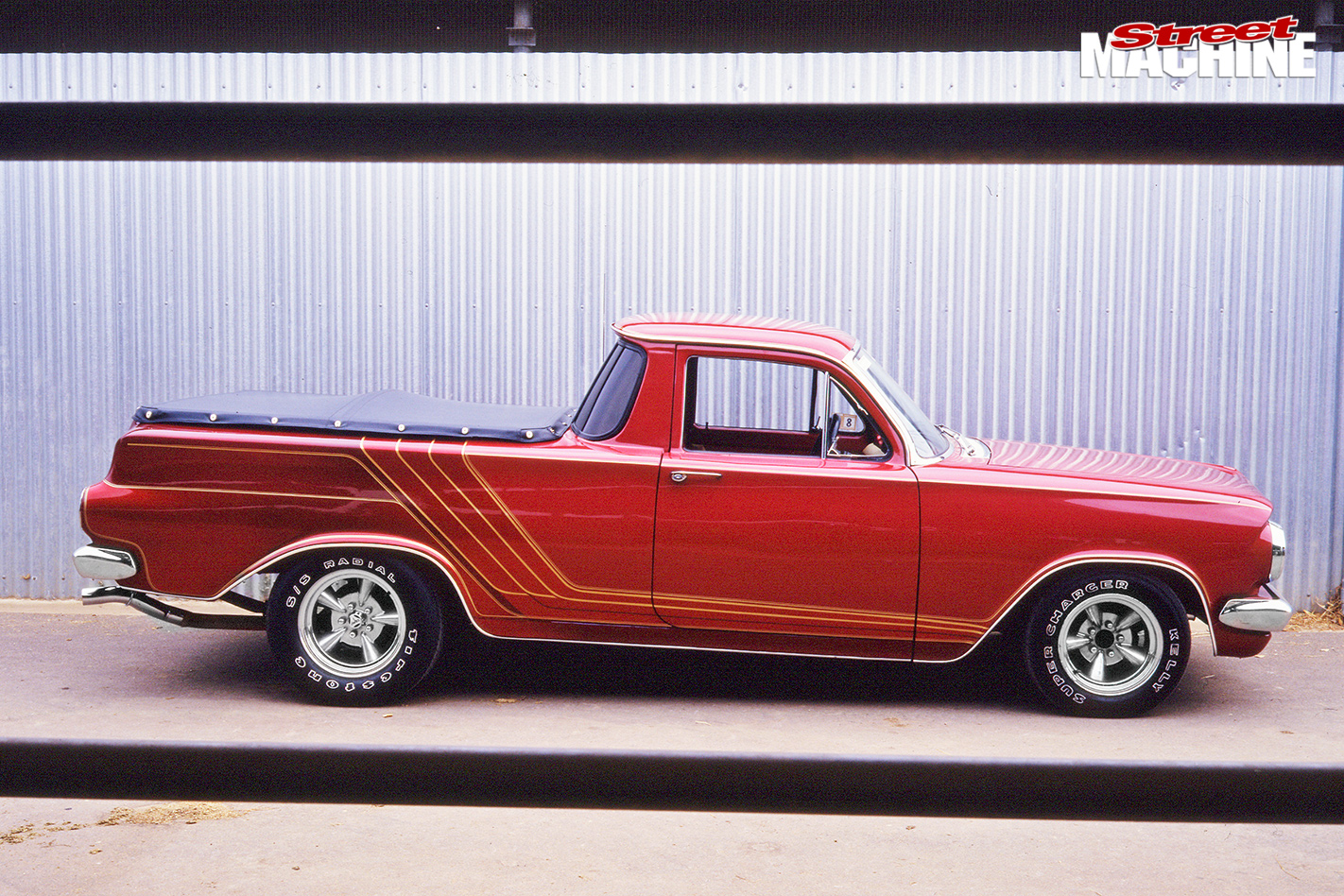 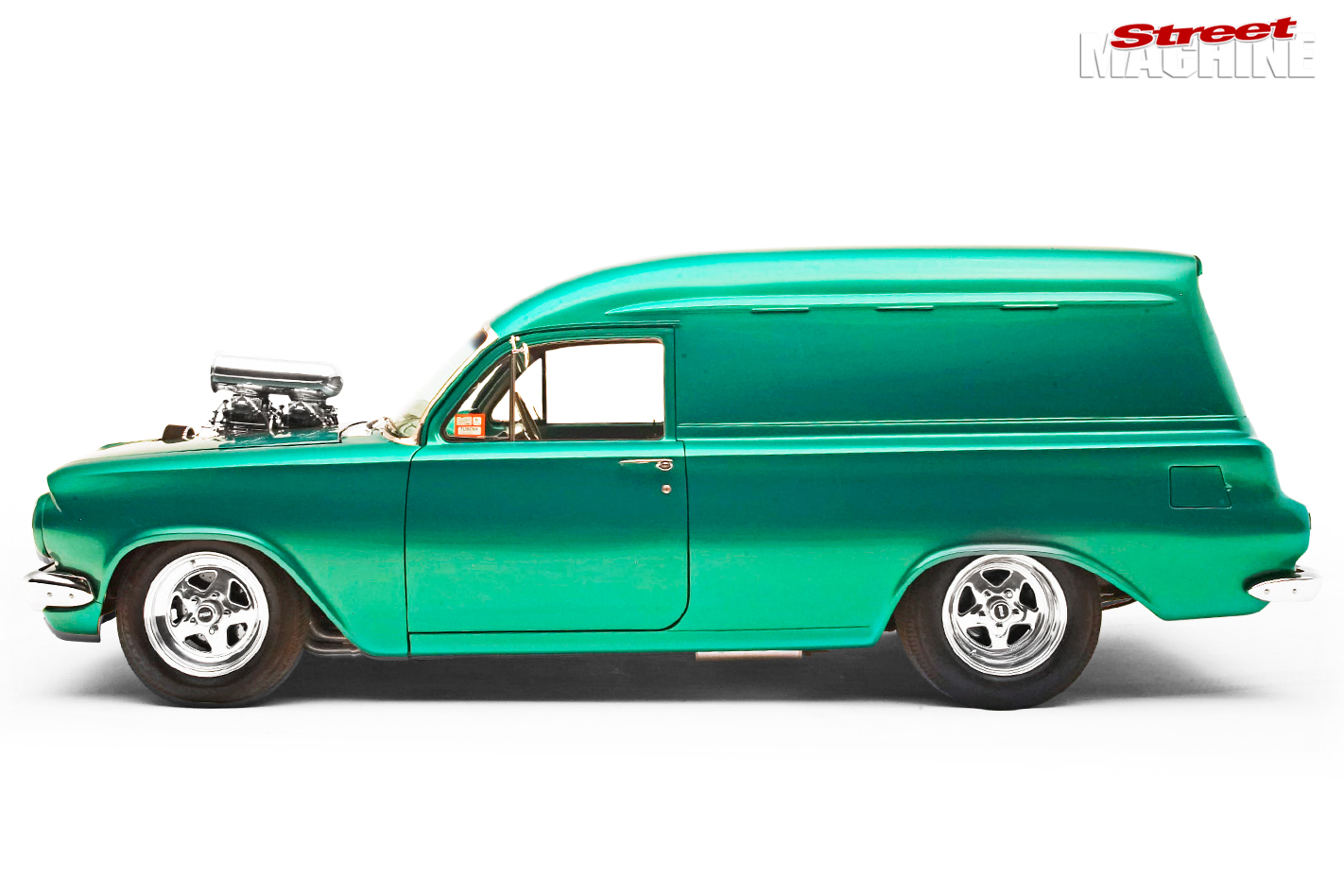 Shane Keene — June 2006
Shane's van copped two features, once in December ’04 and again in ’06 when the beast’s 327  copped a blower! Despite getting some cheeky street time, the van did well in the Summernats Elite Hall, winning Top Van  at the 2006 Nats. 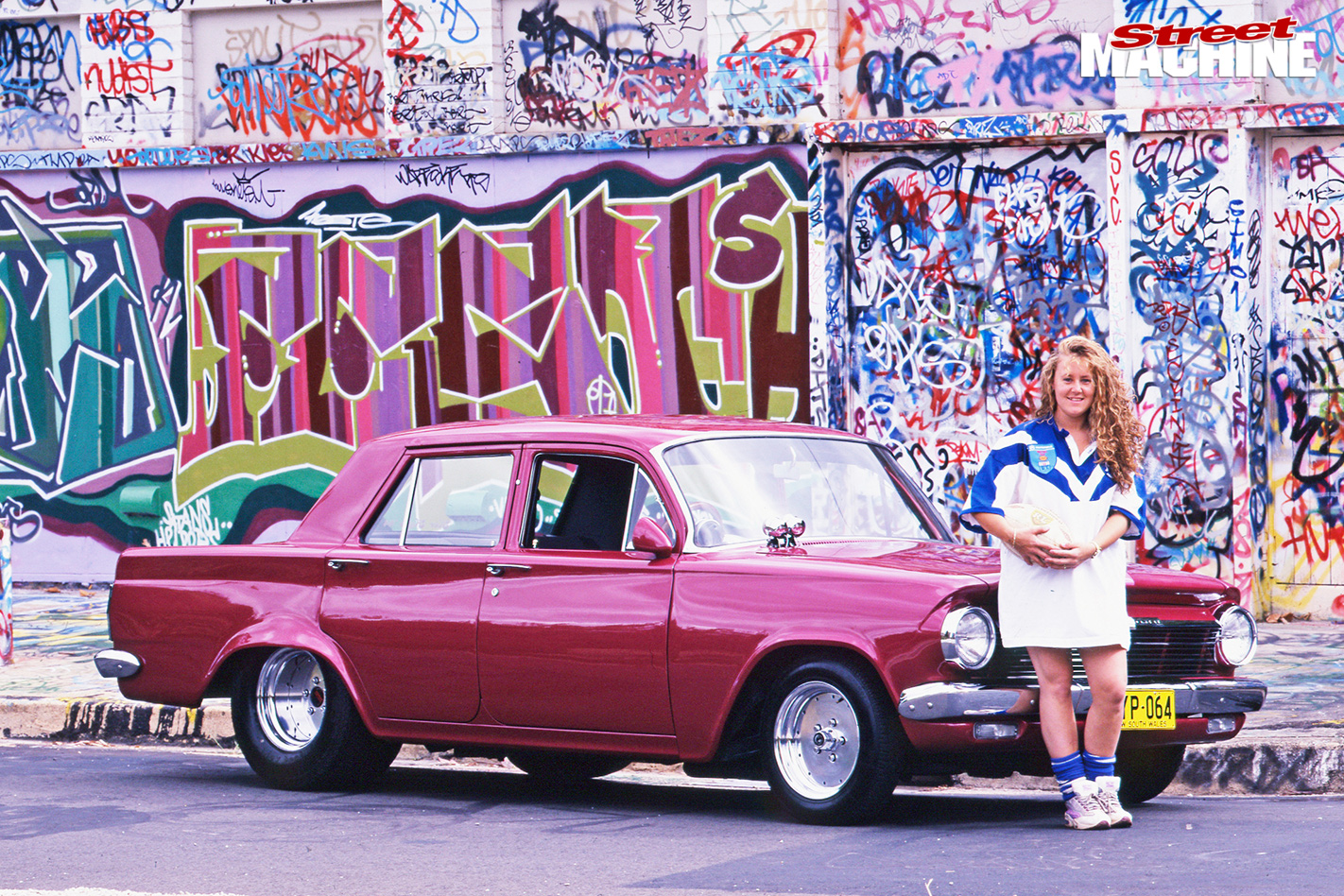 Danielle Freeman — March 1997
One of the most popular Street Machine projects was the Little League 253 build, screwed together by lateral thinker Chris Hillman in 1996. The engine was given away as a reader prize and ended up in Danielle’s hot pink EH sedan, which she built up from a bare shell. 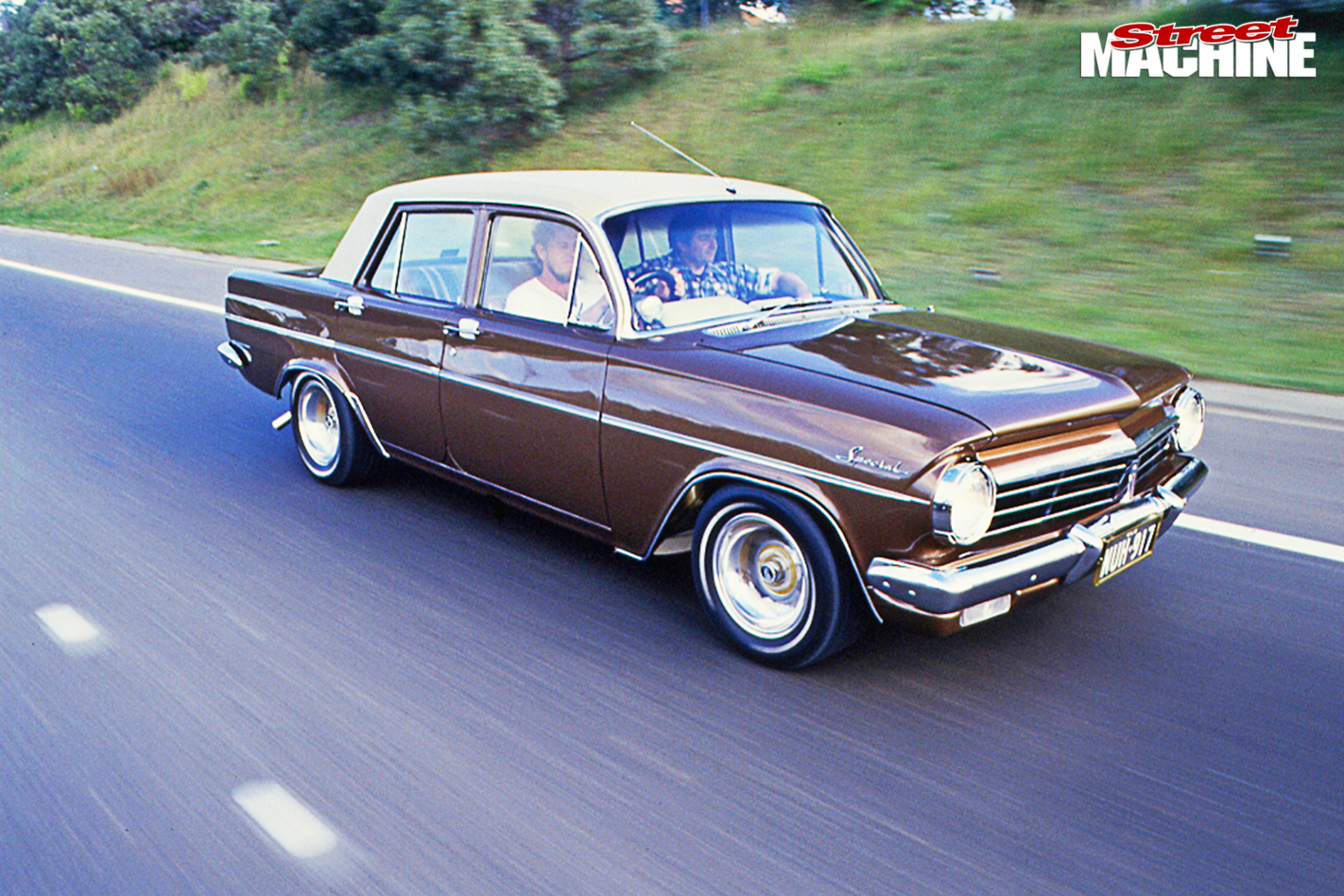 Russell Tronc & Barry Sharman — Aug/Sept ’85
One of the cars that raised the bar for detail in the mid-80s was Tronc and Sharman’s Extra Healthy, with an amazing two-tone undercarriage and gleaming Weber-fed six. They did it again with a V8 EH (SM, June ’87), before Russell built a crazily clean FJ ute. 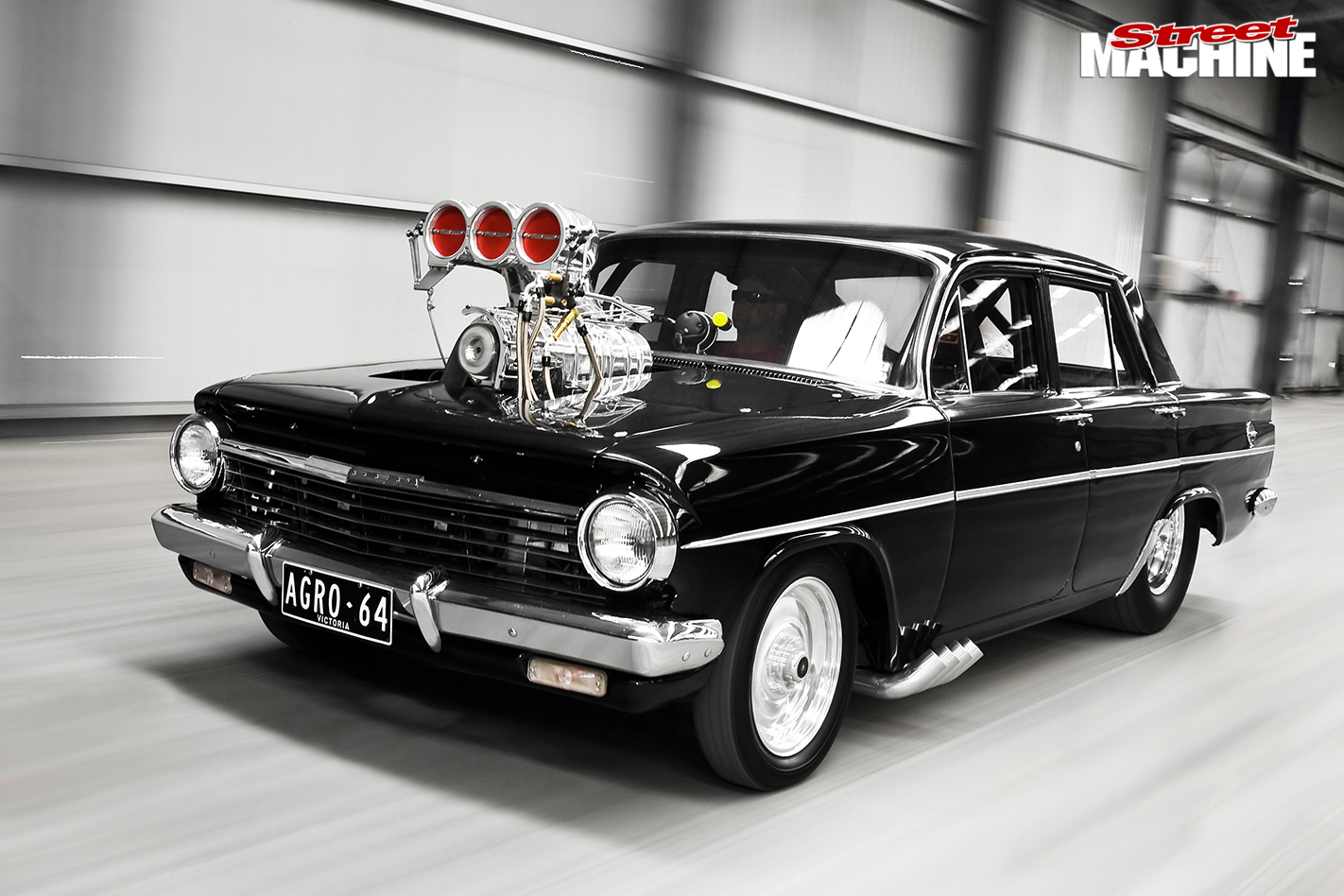 Anthony Trevaskis — April 2010
Anyone who has been a regular at Victorian cruise-style events over the past few years may have been lucky enough to see Anthony’s EH AGR064 rumbling around as casual as can be — as you do with a blown and injected big-block EH. With that out of his system, ‘Trashy’ is readying his car for an assault on the quarter-mile. Watch out! 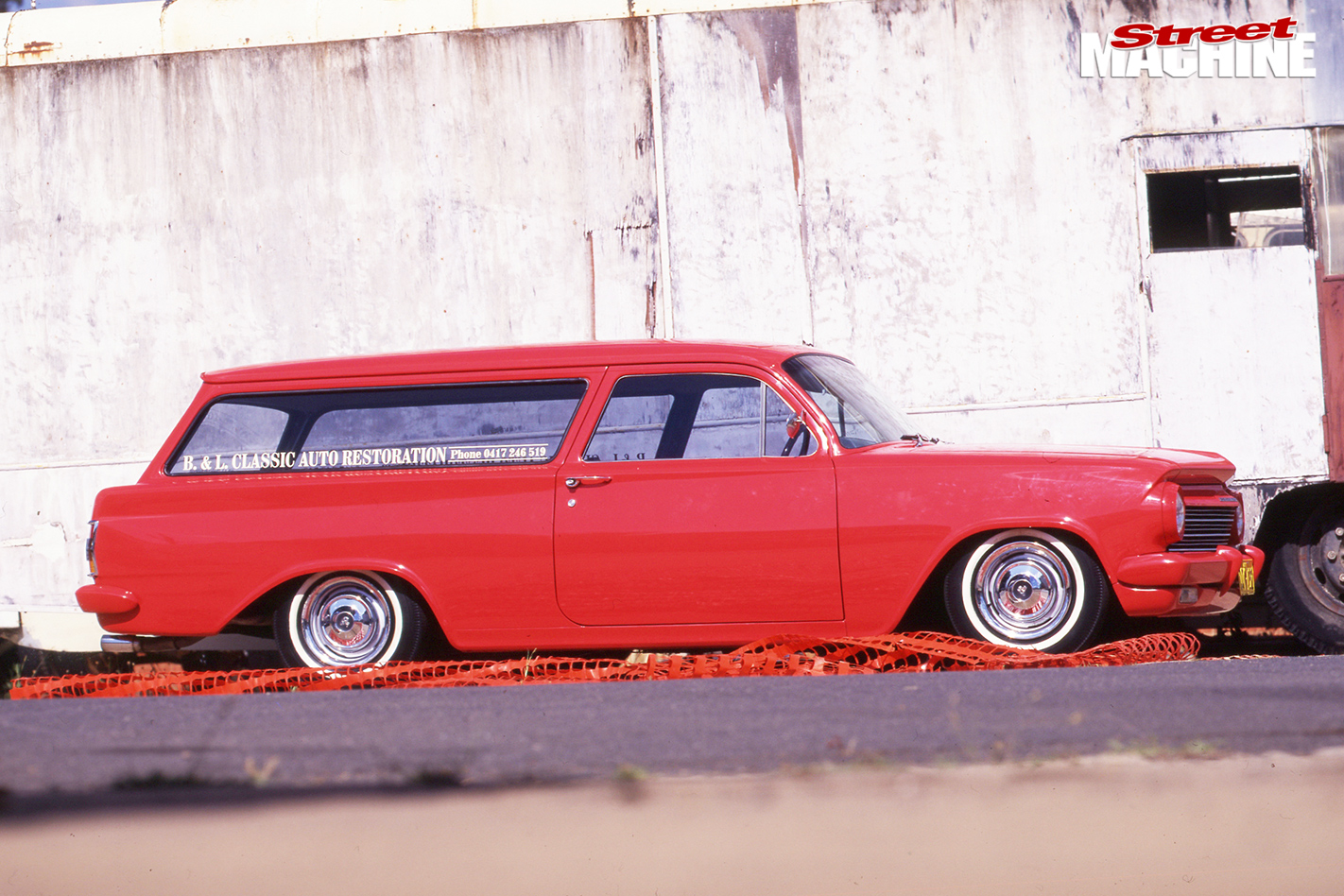 Richard Bell — April/May 1998
Customs are at their best when the builder produces something that looks like a factory prototype. Richard Bell and his buddy Scott Lane did the two-door job right, extending the doors 175mm each and canting the B-pillar forward. A tough red was disguised with factory detailing, while steelies, hubcaps and whitewalls completed the look. 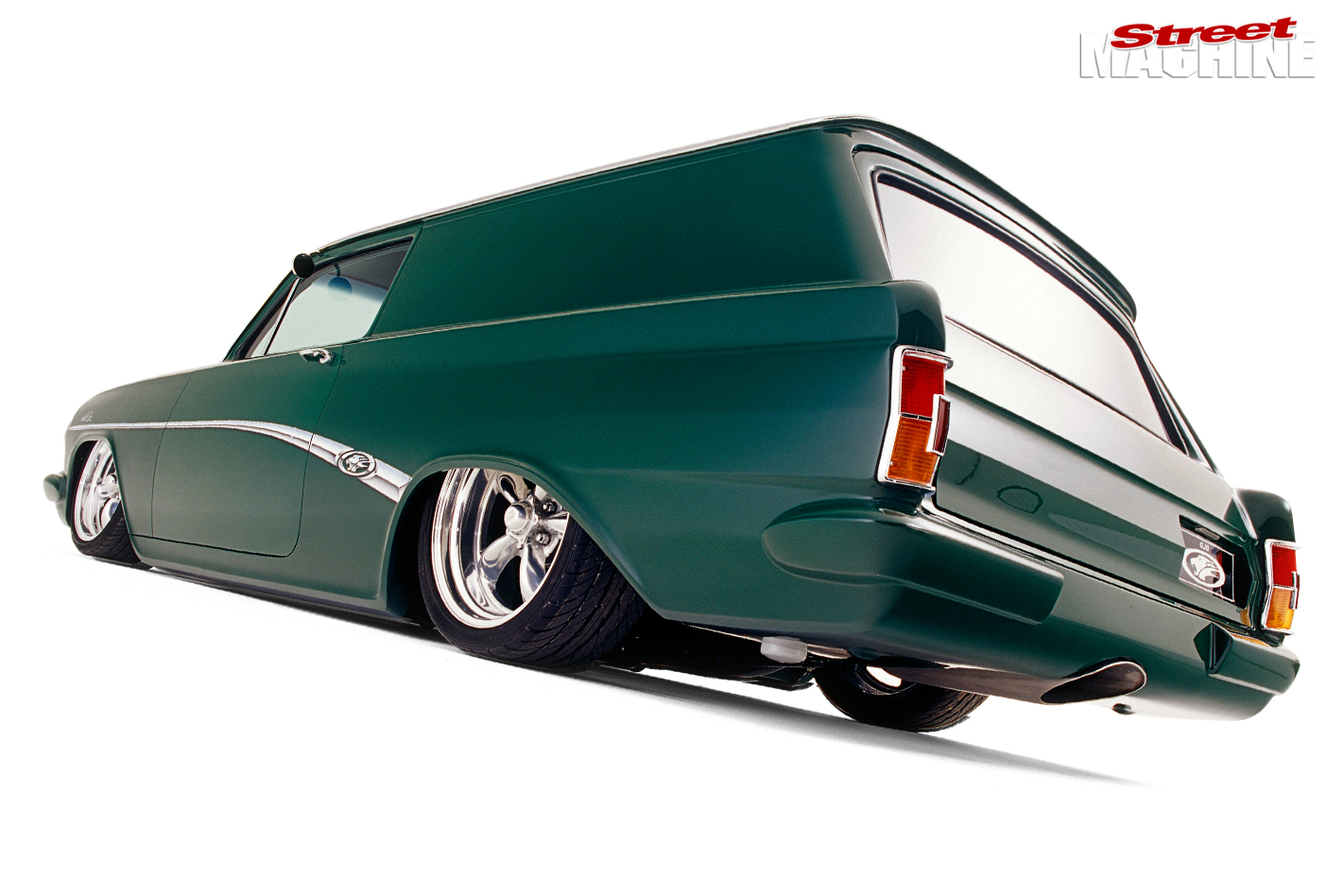 Adam Le Brese — Aug 2003
Queenslander Adam Le Brese turned from dirt bikes and skateboards to car building when he picked up a $300 EH wagon. He turned a knack for picking up new skills and a natural eye for style into this slammed sedan delivery that won SMOTY in 2003. 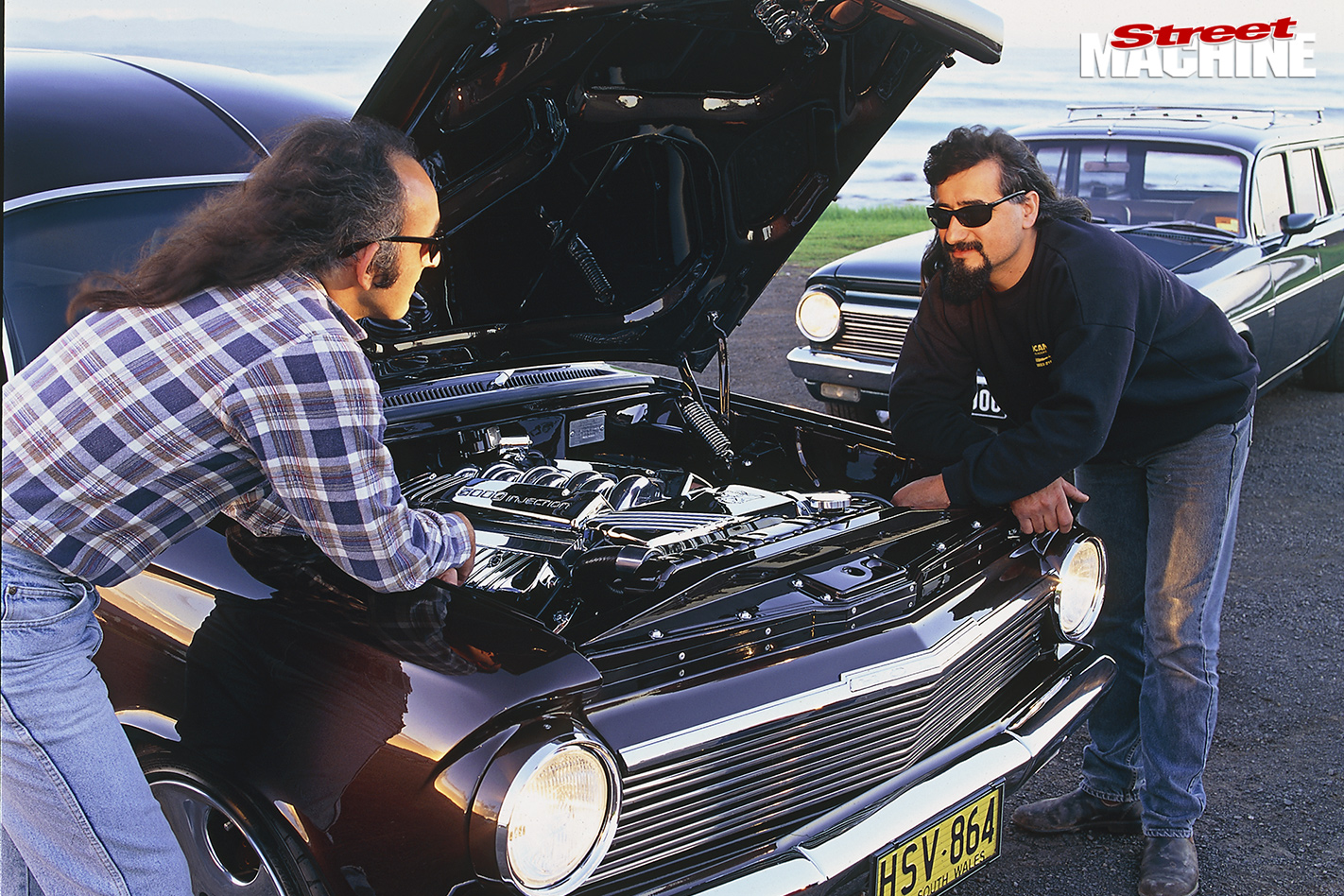 John & Frank Desisto — June/July 2000
John Desisto took out Top Retrotech with his EH van at Summernats 2000 and his brother Frank did the same that year in the Street class, a fitting  tribute to a pair of cars that did much to popularise the retrotech trend. 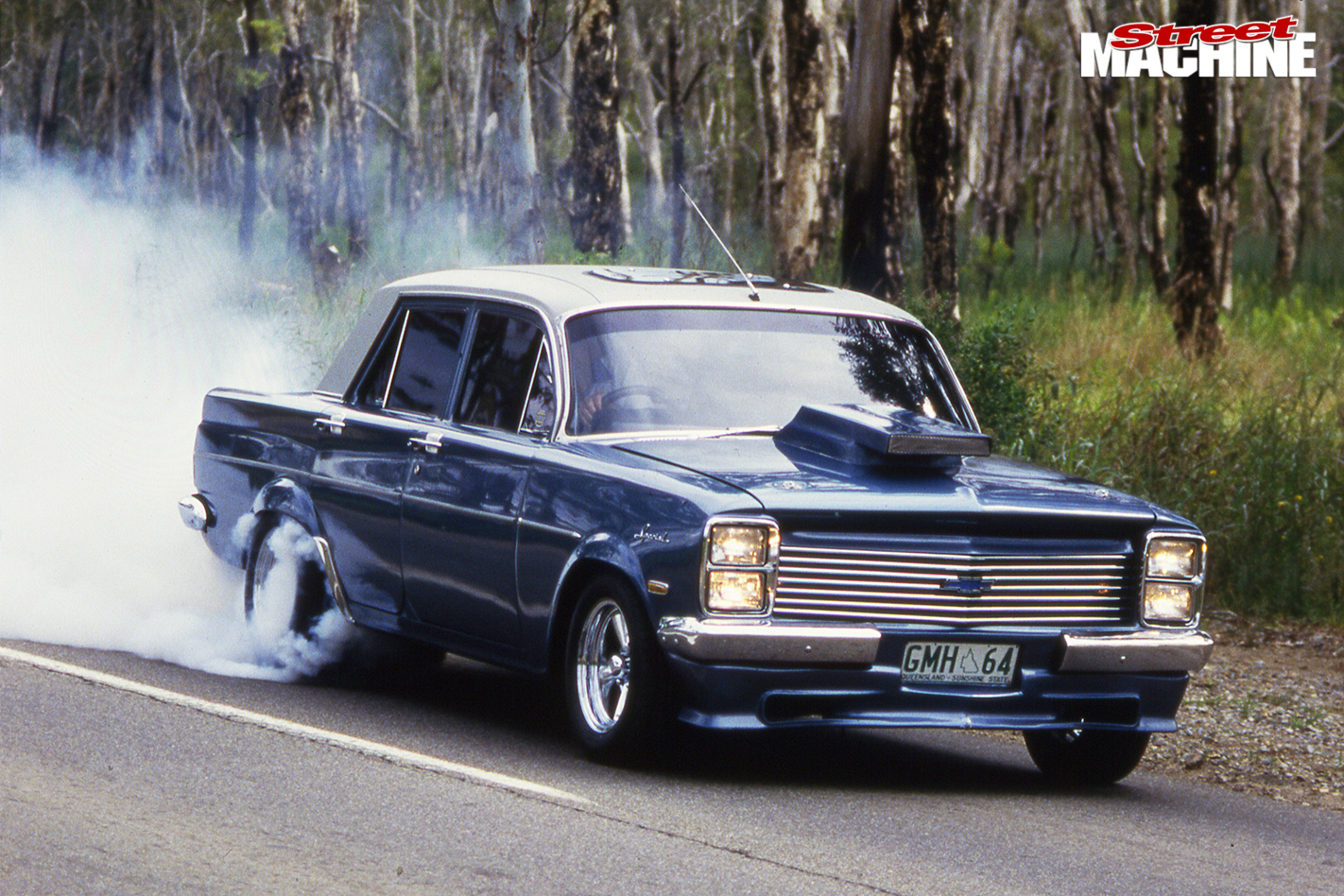 Bill Stonebridge — Aug/Sept ’85
With its stacked headlights and custom grille, Bill’s Toy had one foot in the custom camp, but a staunch 350, Precision nitrous kit and letterbox scoop marked it as an 80s Pro Streeter. The car was later fitted with stock sheet-metal and is now cared for by John Fabian. 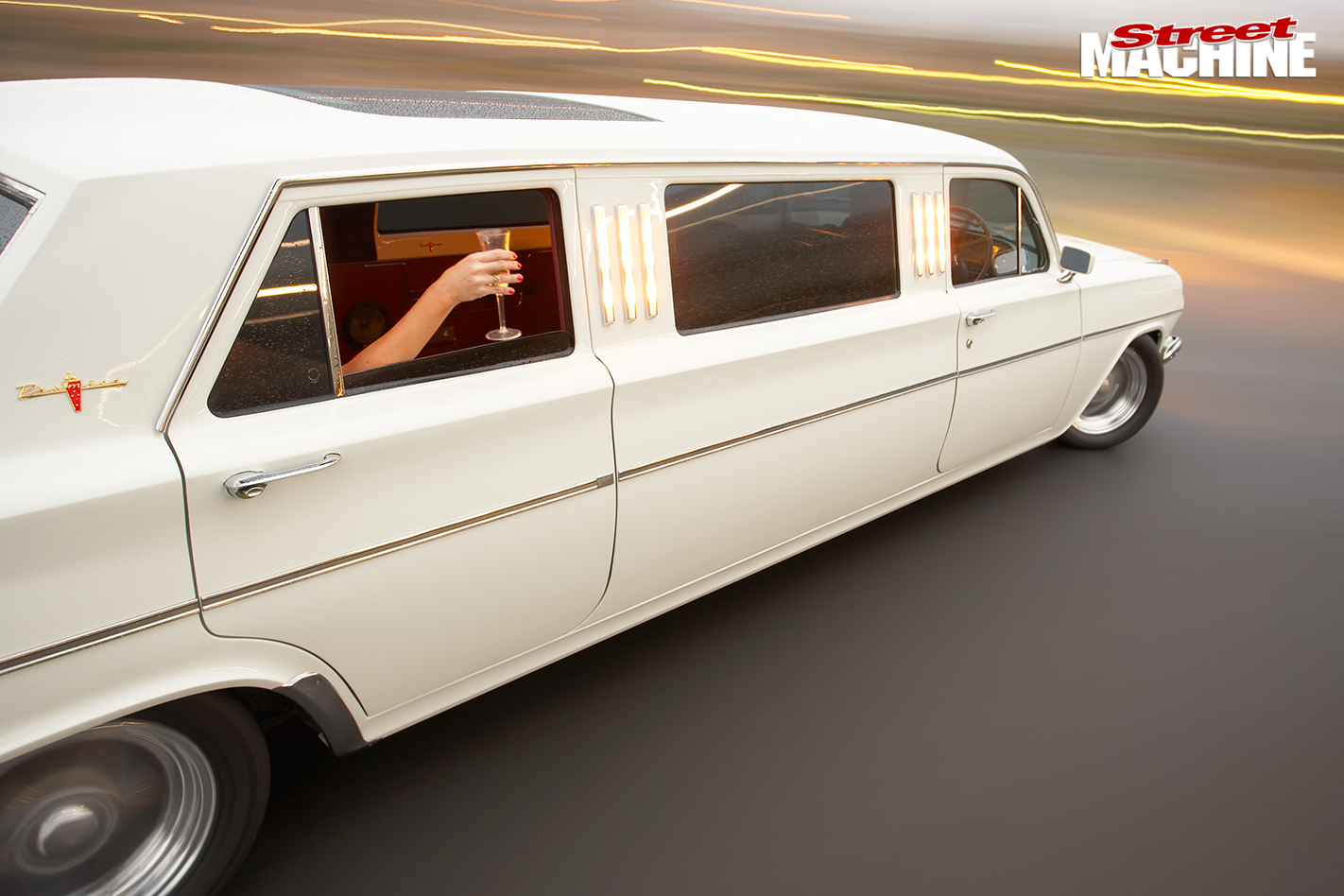 Peter Smolenaers, Darren Thomas & Jonathan Dewer — October 2005
Limos can be tacky but this one’s all class. It has 1400mm more wheelbase and 26 new panels. Other goodies include an EFI six, Tarago power sunroof, power steering and much more. 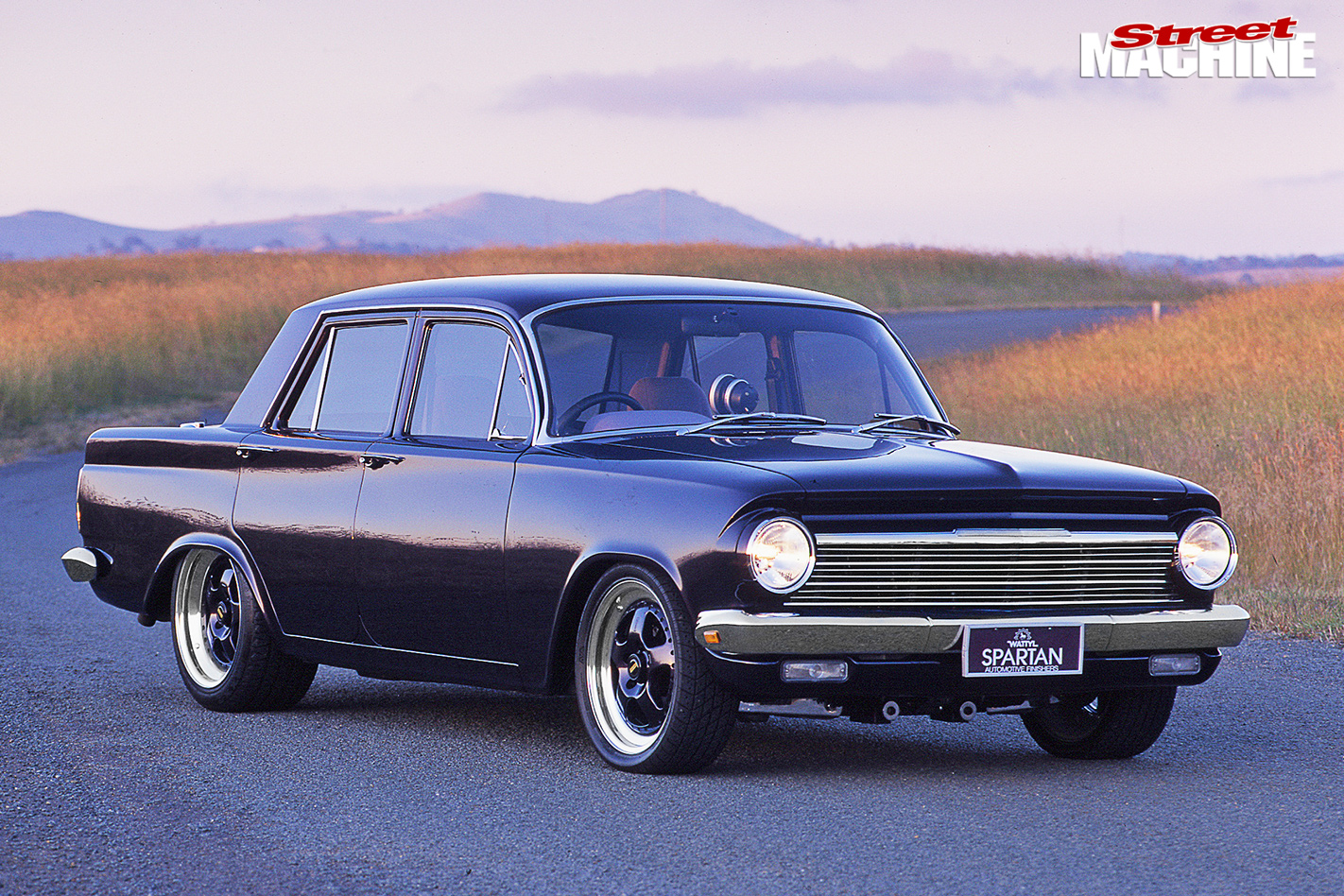 Johnny Musladin — June 1996
Canberra lad Johnny was ahead of his time when he built his fully engineered weapon, which included a 372ci SBC and four-link rear. Since then, Johnny has been busy repowering the car with a twin-turbo Lexus V8 amongst other upgrades (In The Build, August ’09). 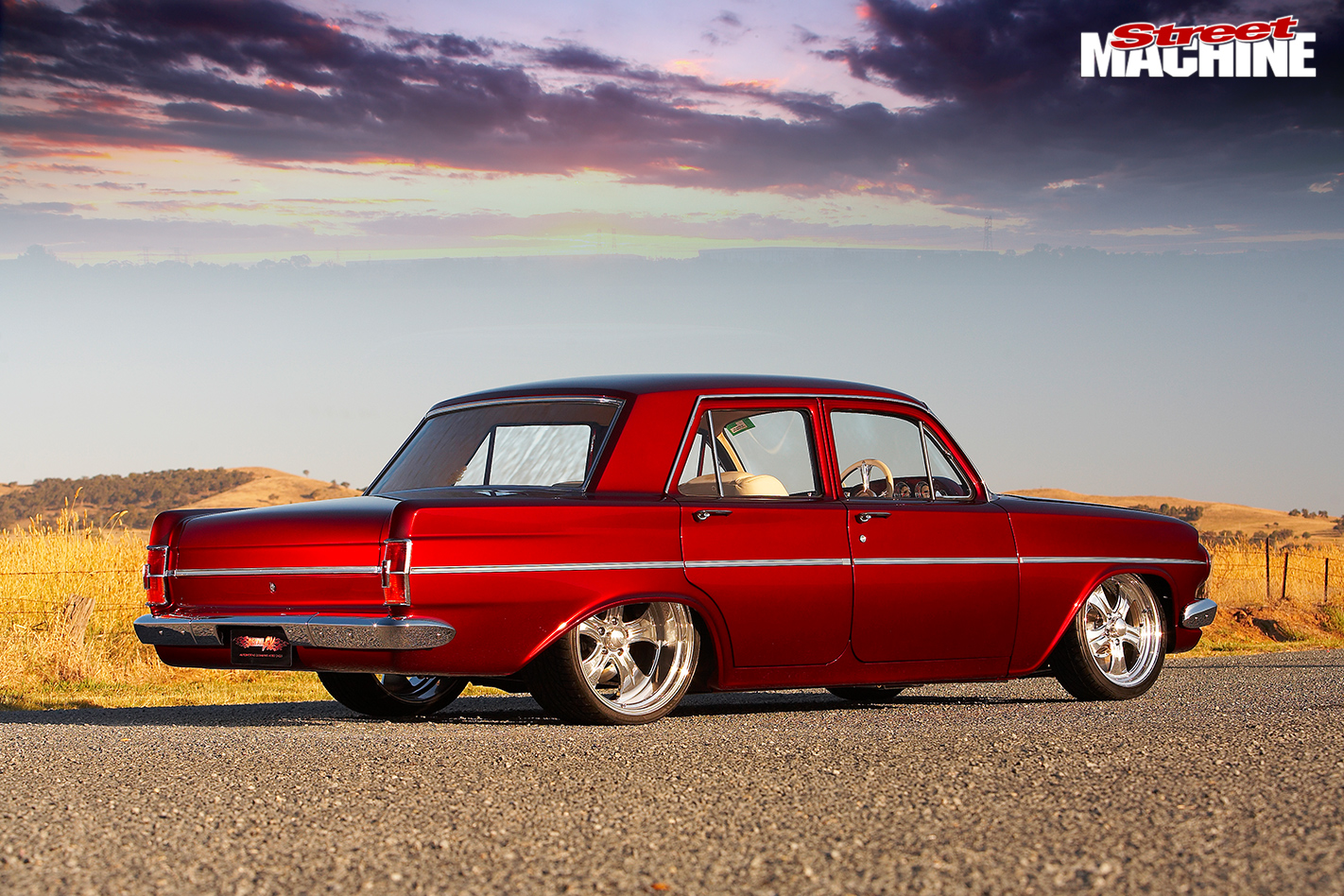 Justin Gardner — April 2011
Justin Gardner and his dad detail some of the best elite cars in the business, so when Justin came to build his own, it’s no surprise it turned out so hot! HOK Brandywine duco, a tasteful sheet-metal dash, 18 and 20in Intros and a tough Vortech V7-assisted 355ci Holden are amongst the highlights. 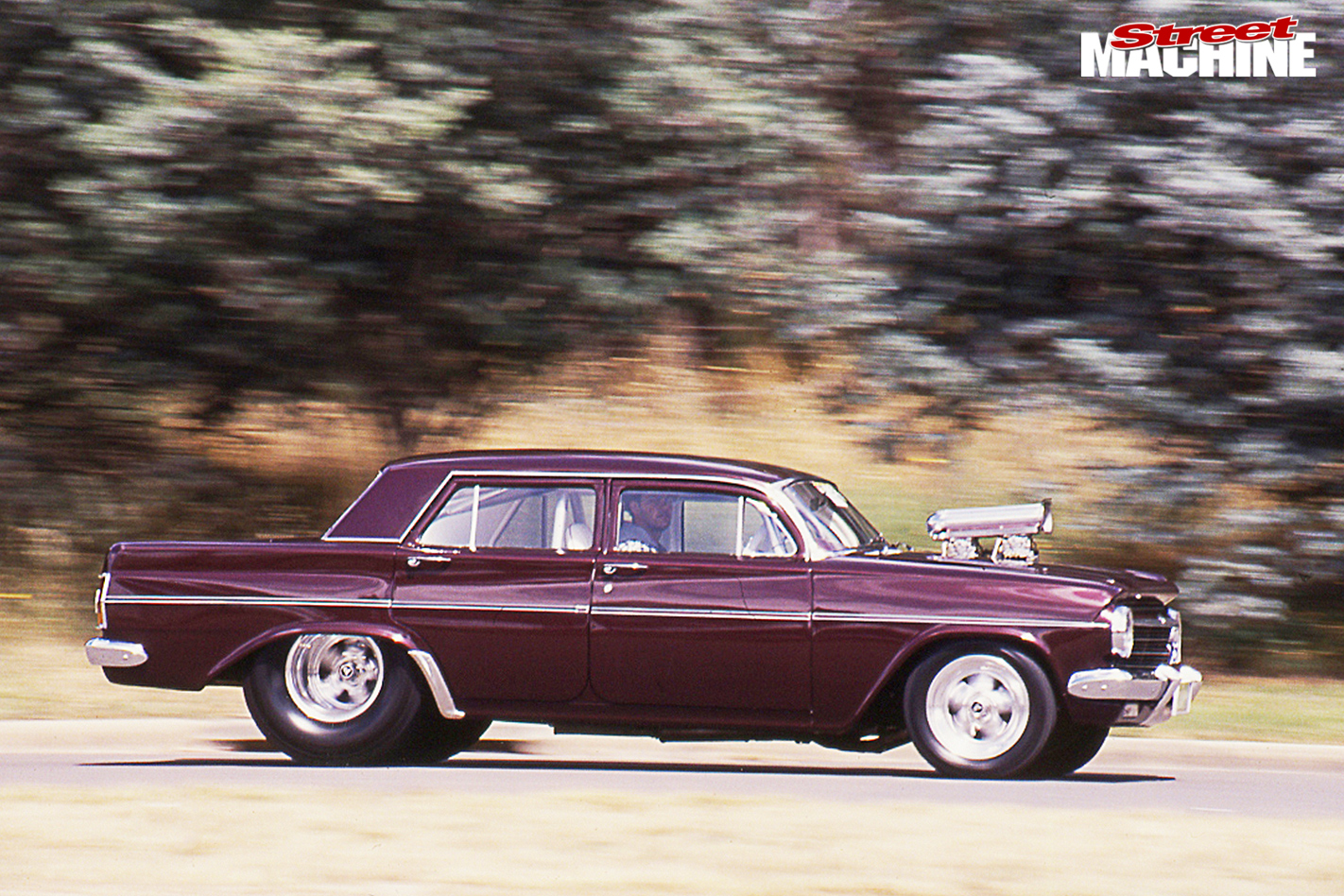 Jody Vincitorio — Apr/May 1994
The bloke who came runner-up in 2012's SMOTY stoush with his chop-top HQ Monaro has plenty of runs on the board, including this weapon!  He repainted it blue with a white roof for Nats 13, then sold it to fund the deposit on his first house and never saw it again. 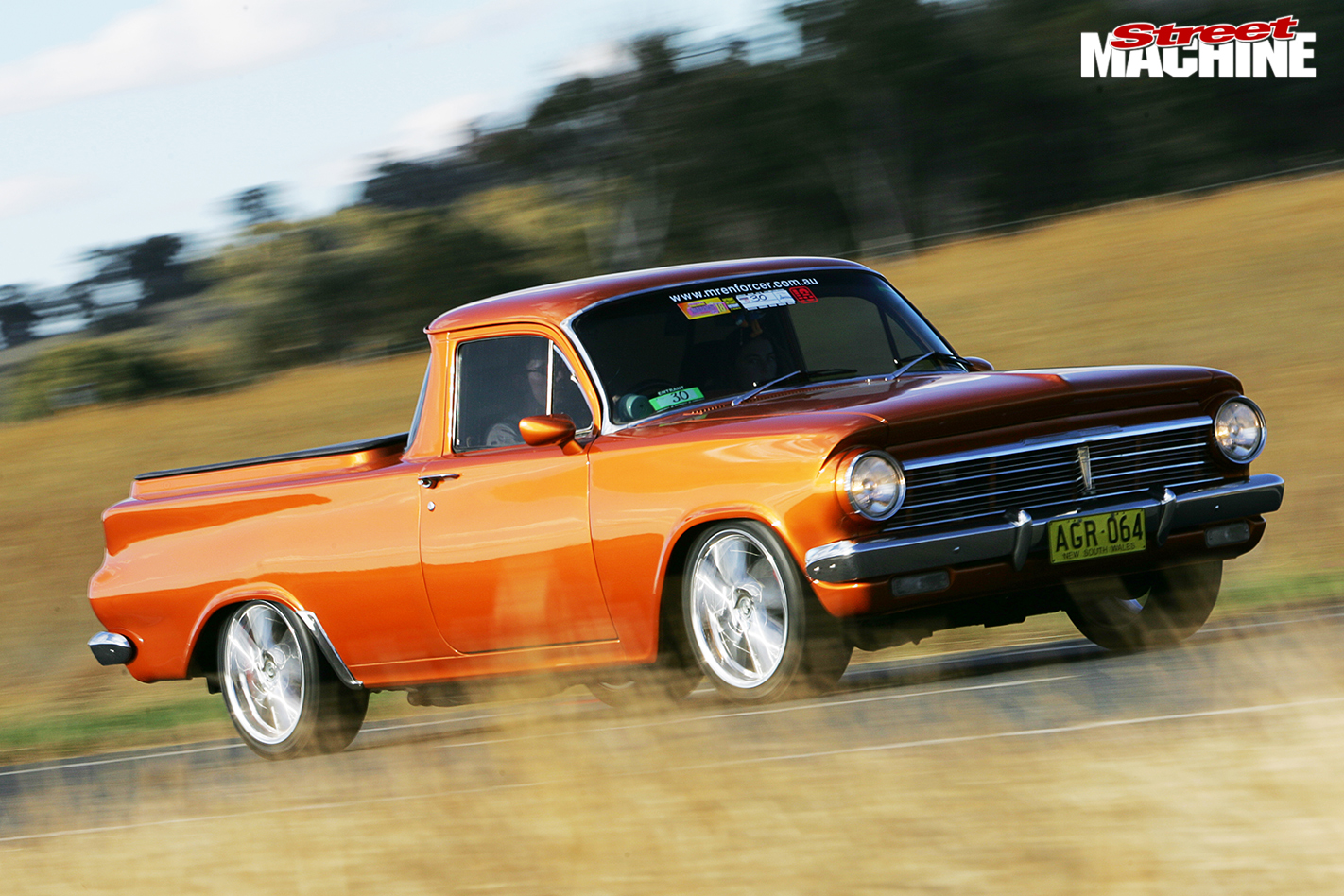 Adrian Donohoe - April 2005
Adrian was a young bloke when he bucked convention at the turn of the millennium to drop a Lexus V8 into his EH ute. By the time we featured the car in '05 he'd added a Bullet Supercars blower kit. Combined with a five-speed shifter, it makes for a spirited yet reliable and economical cruiser. 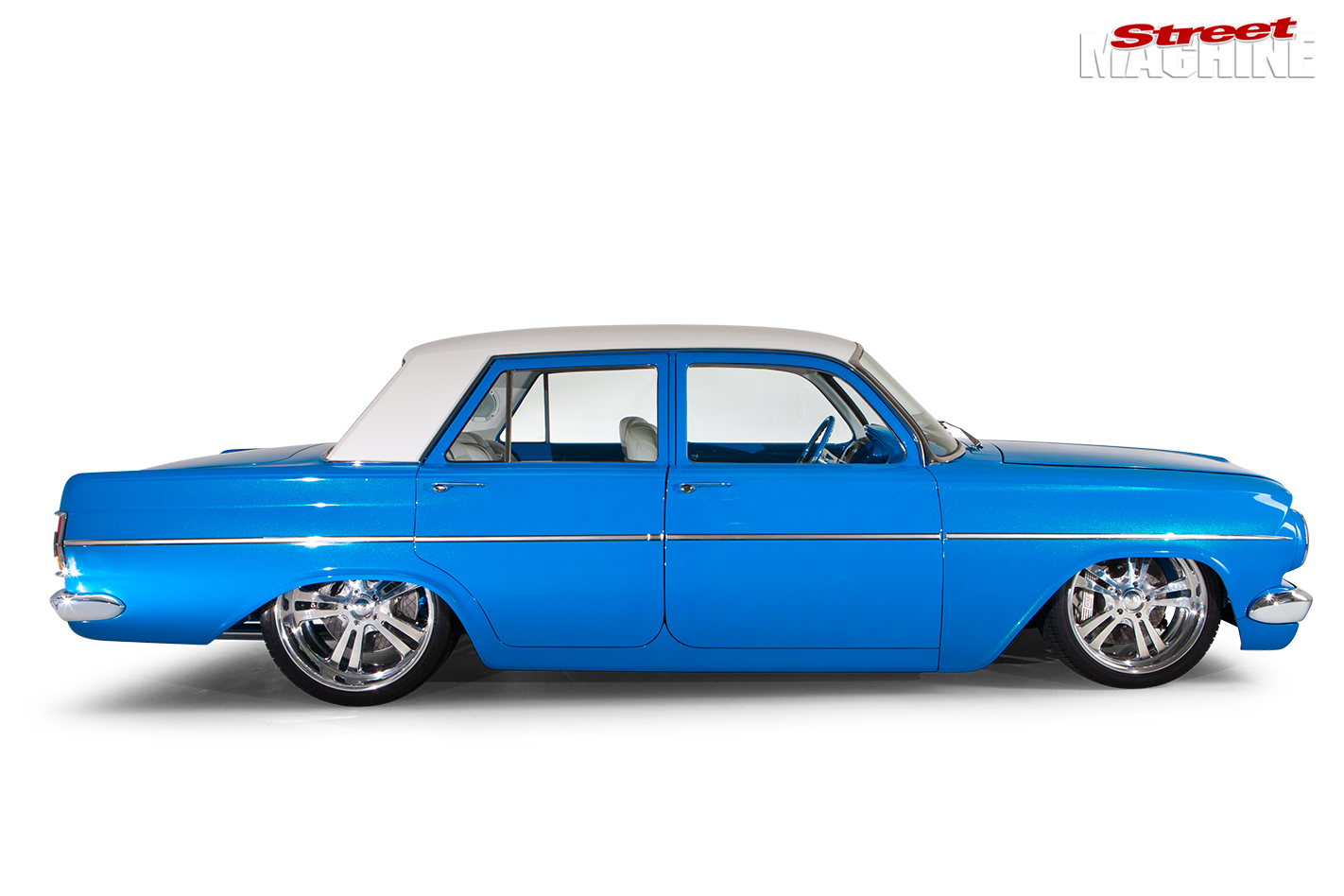 Anthony Newman — Dec 2012
A Harrop-injected LS2, TKO five-speed, massive brakes and  BA Falcon IRS are just the start for Anthony’s stunning EH. The car is a work of art throughout, with each custom crossmember, bracket and panel designed with both form and function in mind. 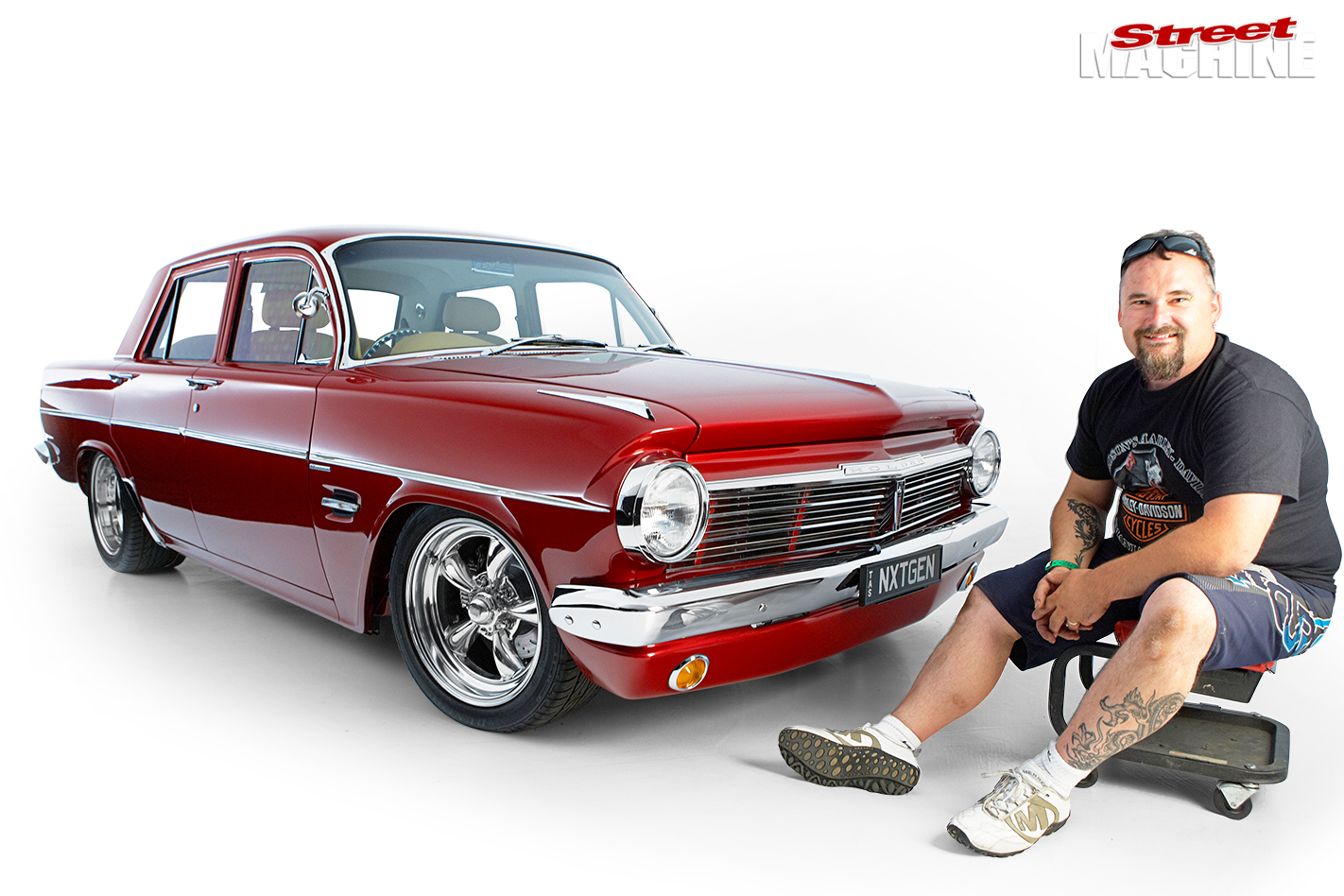 Ricky Absolom — May 2010
Tasmanian Ricky Absolom knocked our socks off when he turned up at Summernats 23 with NXTGEN. Powered by a Harrop cross ram-equipped LS1, Ricky’s EH boasts a bitching stance, a complete VY SS interior and breathaking detail from top to bottom. 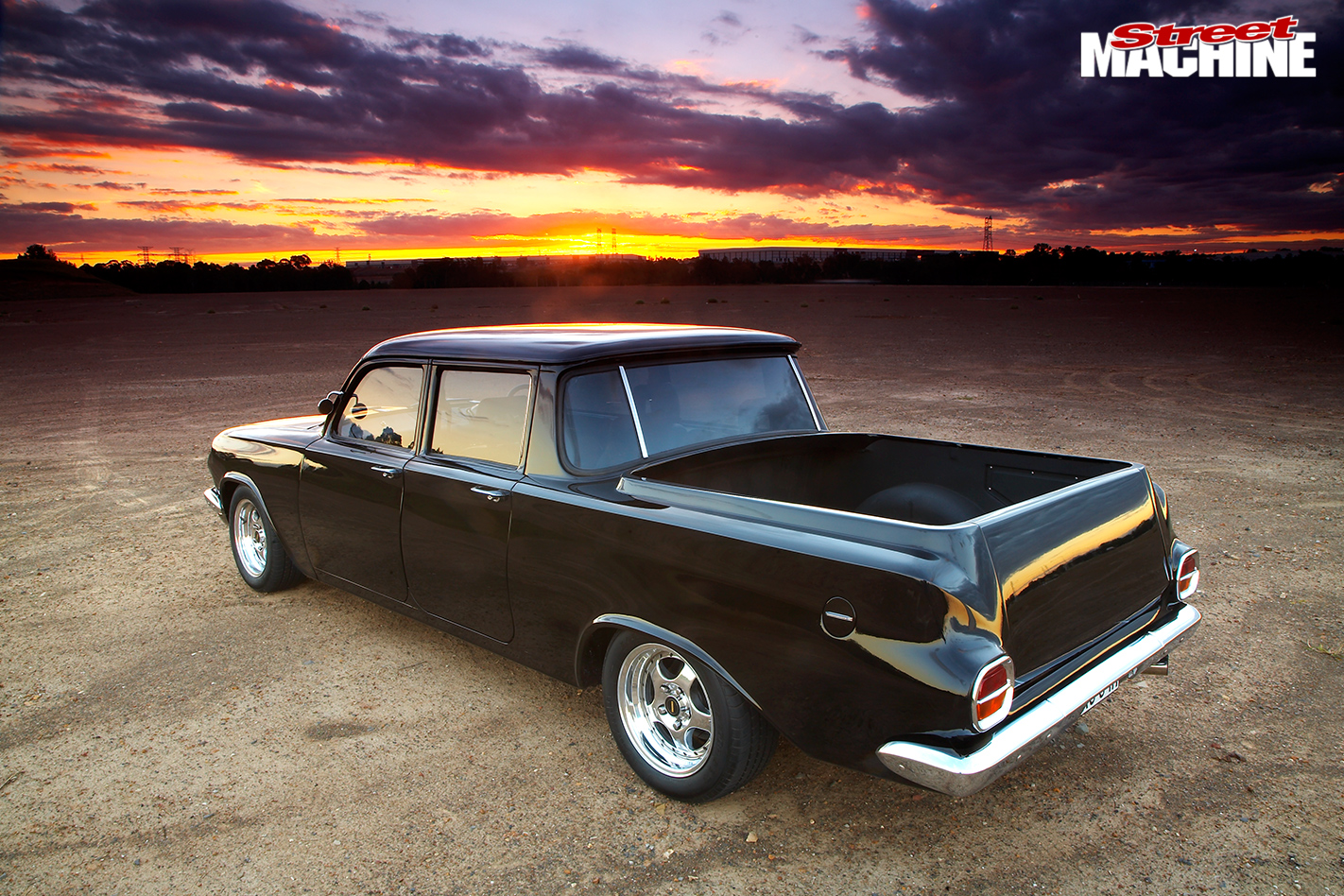 Luke Johnson — August 2007
Sydney's Luke Johnson is a handy bloke, as shown by his Crewman EH. Starting with an EJ wagon, Luke added a ute rear section that was shortened 300mm to keep the proportions right. Power was provided by a 185kW HSV mill and five-speed combo. 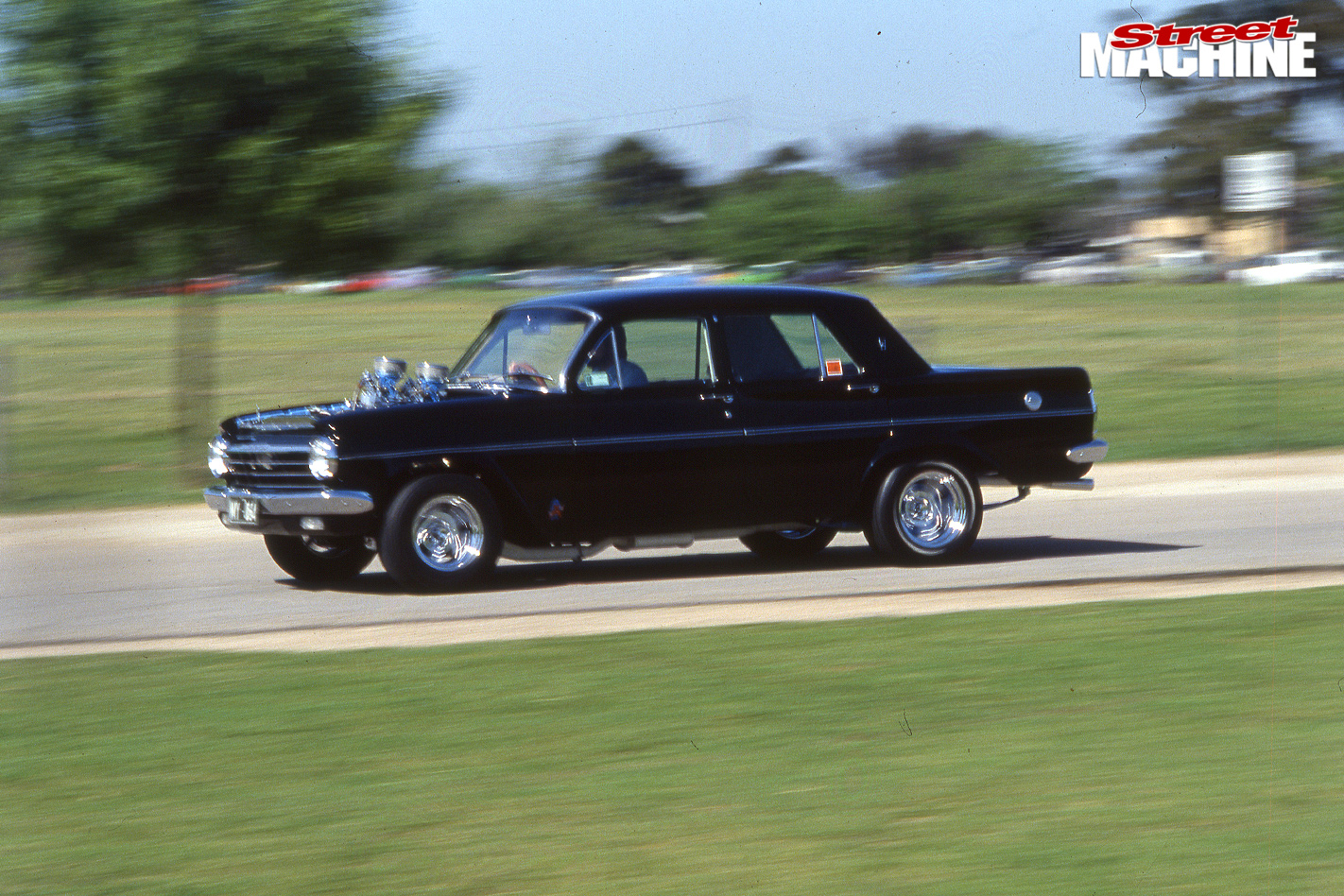 Bob Grambau — April/May 1982
Holdens didn’t get much tougher in the early 80s than Bob’s EH, with a tunnel-rammed 350 Chev, TH400 and 9in combo. Full velour trim, 13 and 14in Dragways and a Moon-style tank made for an attention-grabbing mix of show and go. 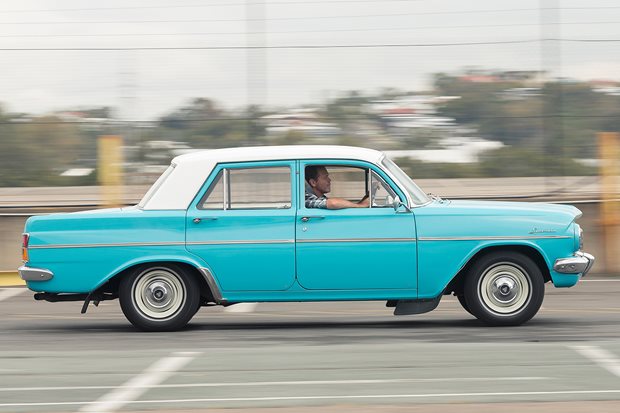 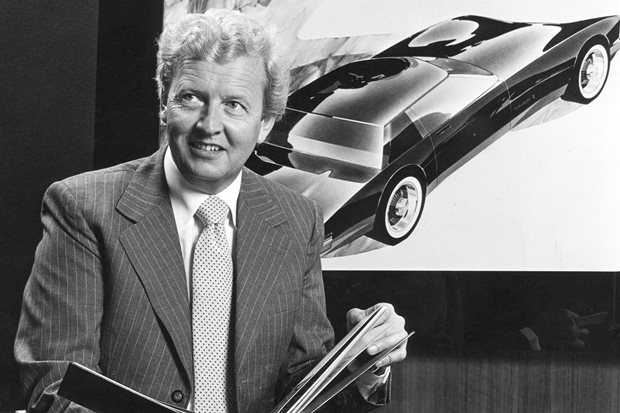 Leo Pruneau is the father of the Commodore, the 1965 Impala hardtop and a certain popular van 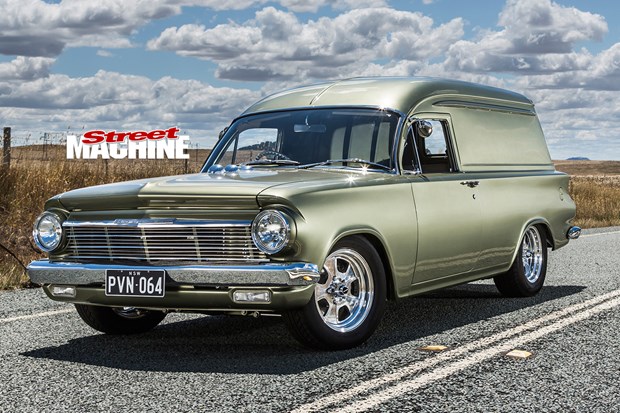