RAT ROD, patina, barn-find. Few words in the car lovers’ vernacular have been abused and cheapened more than these three. So it’s a relief – no, a Christmas miracle – to come across a fresh and legitimate application for at least one of these terms: patina. 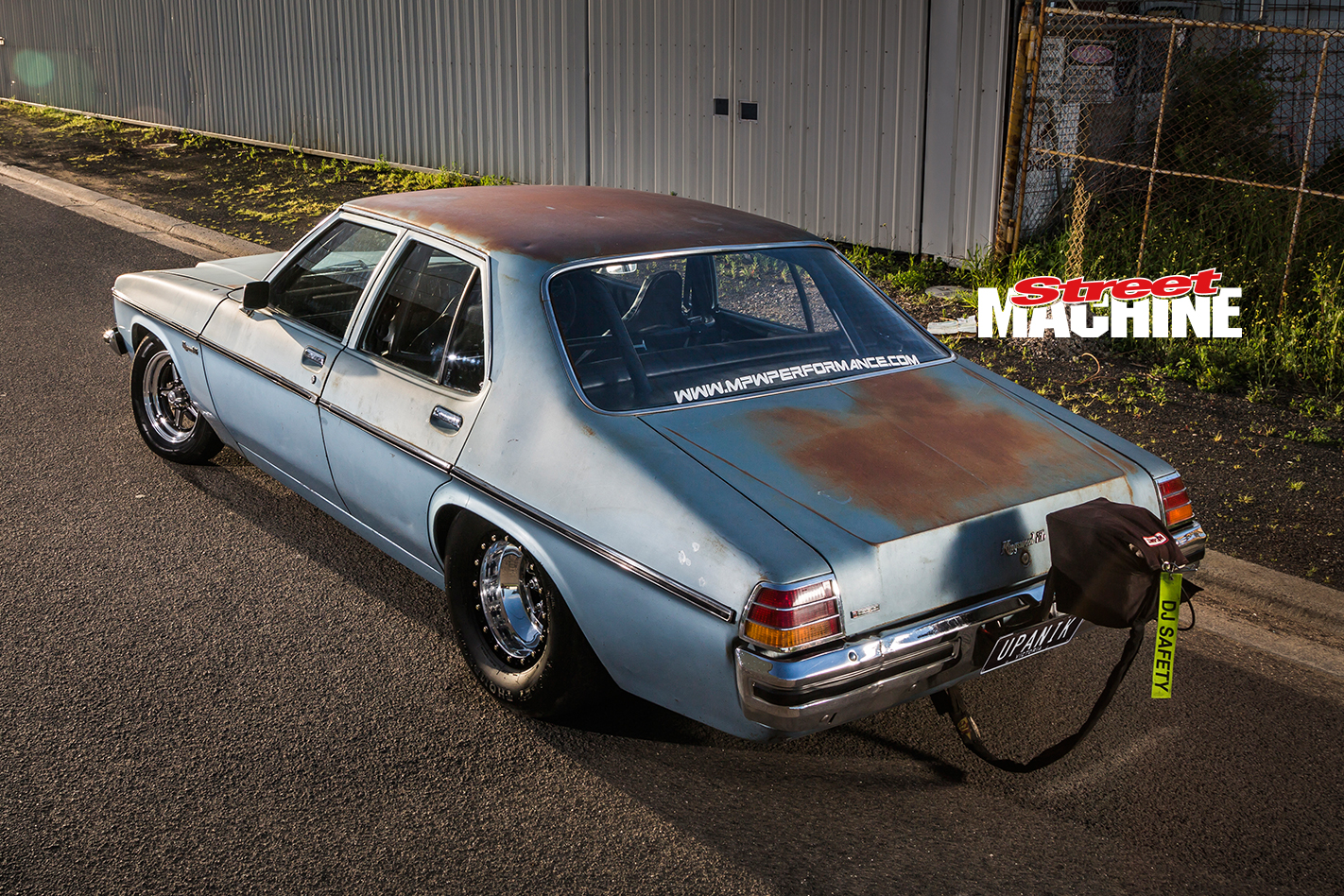 “Nice panel and paint won’t make it go quicker,” says Geelong’s Jesse Boothroyd, owner and builder of this deceptively crusty-looking eight-second HZ Kingswood. “People are always asking when I’m going to respray it, but it looks bad-arse as-is, and I think the money is better spent on making it faster.”

You can’t argue with that logic, and let’s face it, Jesse’s HZ has its own identity now – adding fresh paint to its nicely ruffled exterior would ironically take the ‘shine’ off its presence both on the street and the strip. 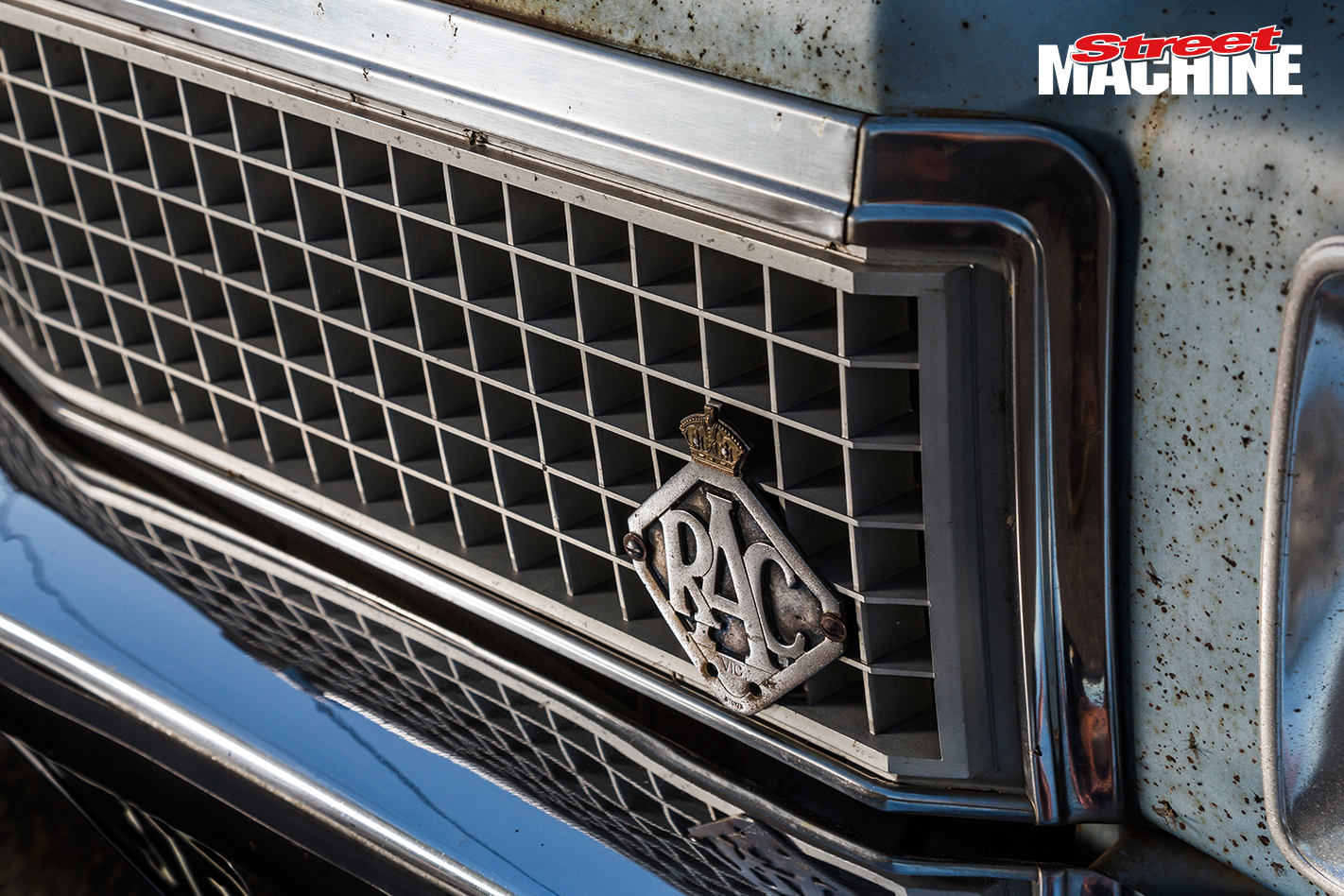 The Kinger came into Jesse’s life as a grandpa-spec survivor running a 202, three-on-the-tree manual and a blown banjo diff – the latter thanks to Jesse when the car was owned by his friend Josh. “There’s nothing wrong with doing a skid in your mate’s car!” he laughs. “I thought I’d see if it could do a burnout. I got it spinning in first, flat-changed the column-shift into second and bang – it was all over.” 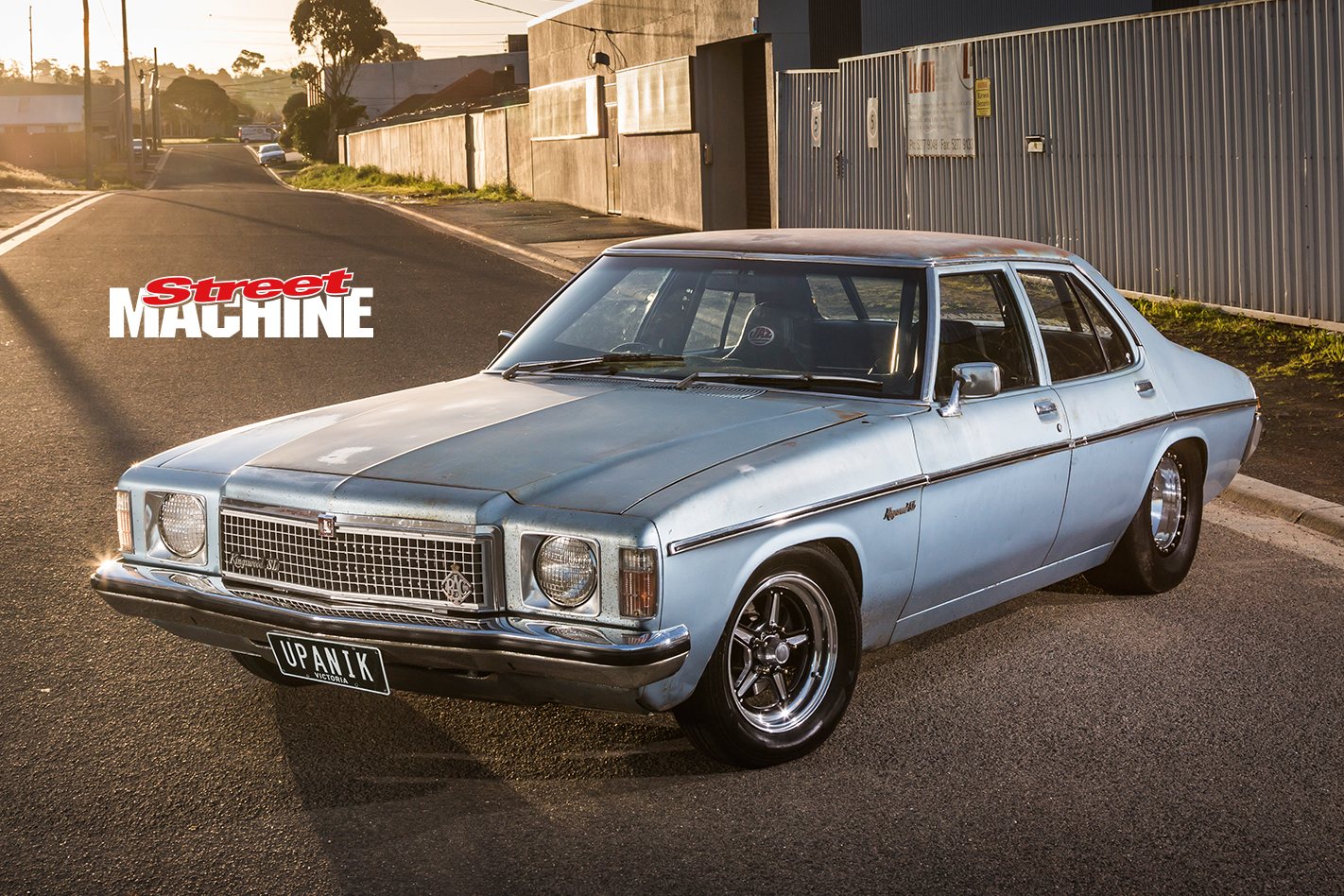 Josh sold it to another of their mates, Lee, who palmed it off to their friend Jake, until finally becoming Jesse’s a few years ago. “It did the rounds but nobody really wanted it,” he says. “It was cool and all, but wasn’t a mint car, nor was it an HQ, and for me it was an impulse buy. I was building a VS Commodore at the time with a turbo LS, but that project was dragging on so I thought: ‘Stuff it. Let’s chuck all the running gear into the HZ and get it on the road.’ No tubs, no rebuild, just a quick turbo swap into a dirty old Kingswood. 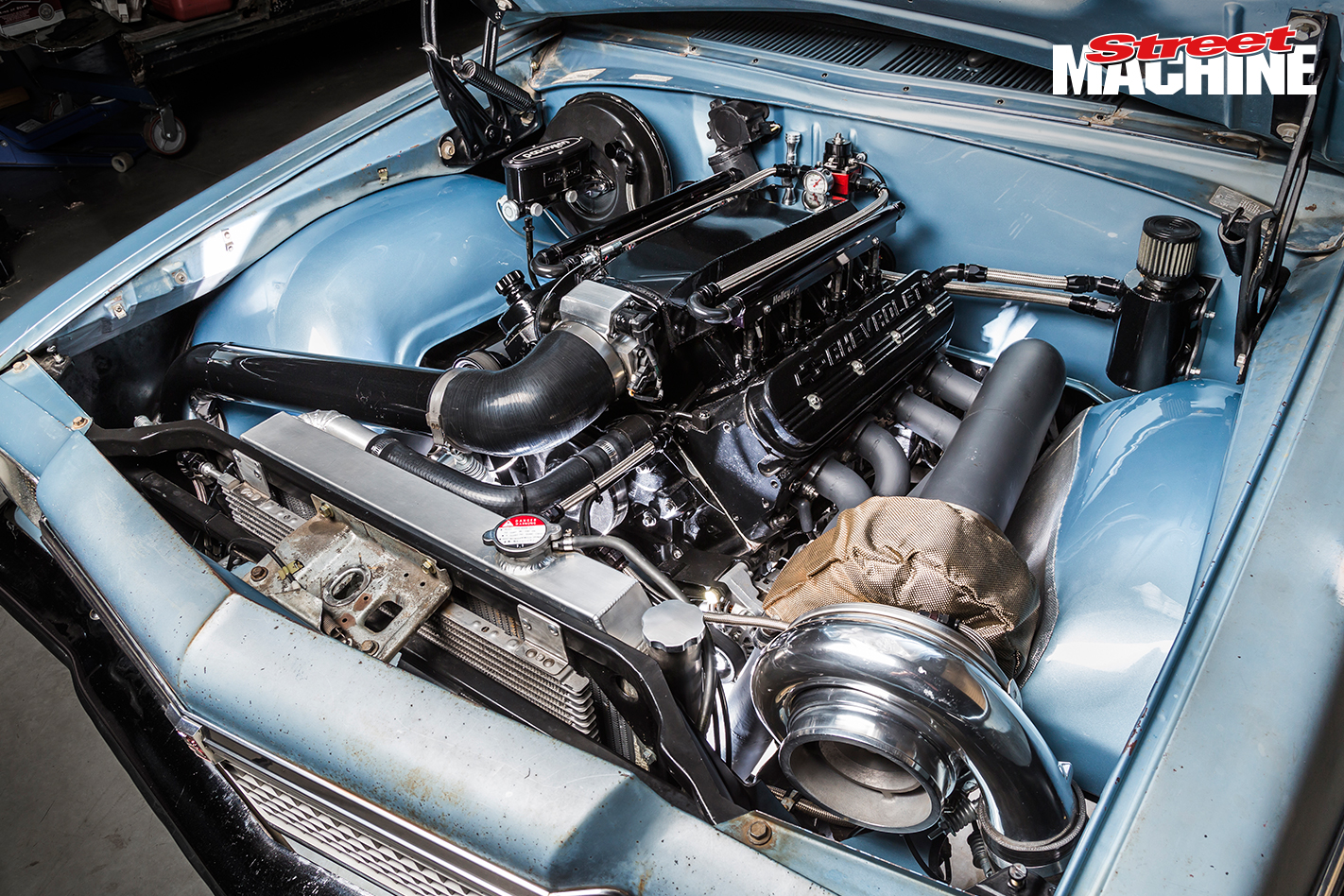 “Of course, that plan went mostly out the window!” he laughs. The 403-cube LS donk was expertly built by Tim Holmyard at TJH Performance in Geelong. It’s cranked out 850hp at the treads and has pushed the heavyweight HZ to an 8.94@153mph best on 17lb of boost. 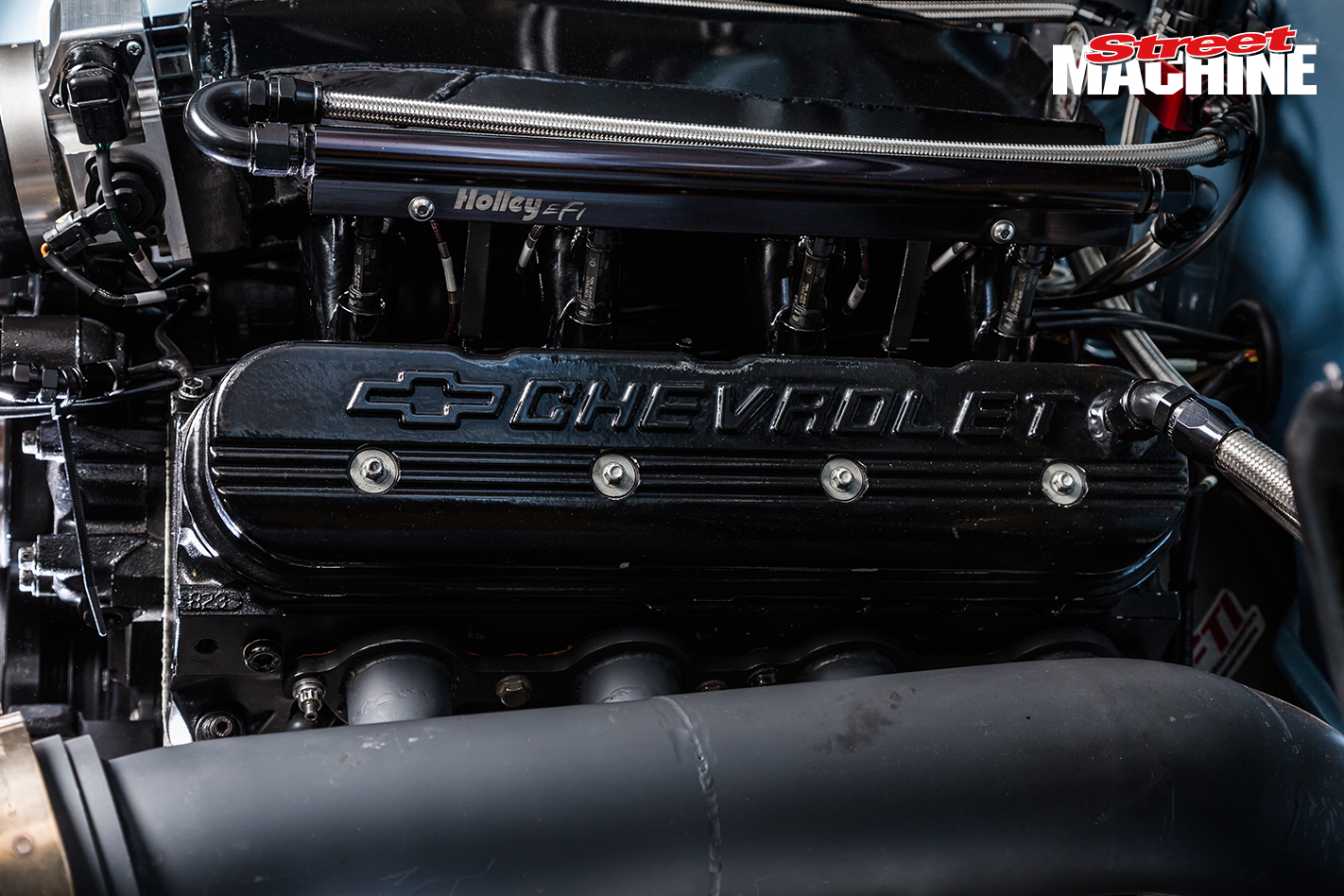 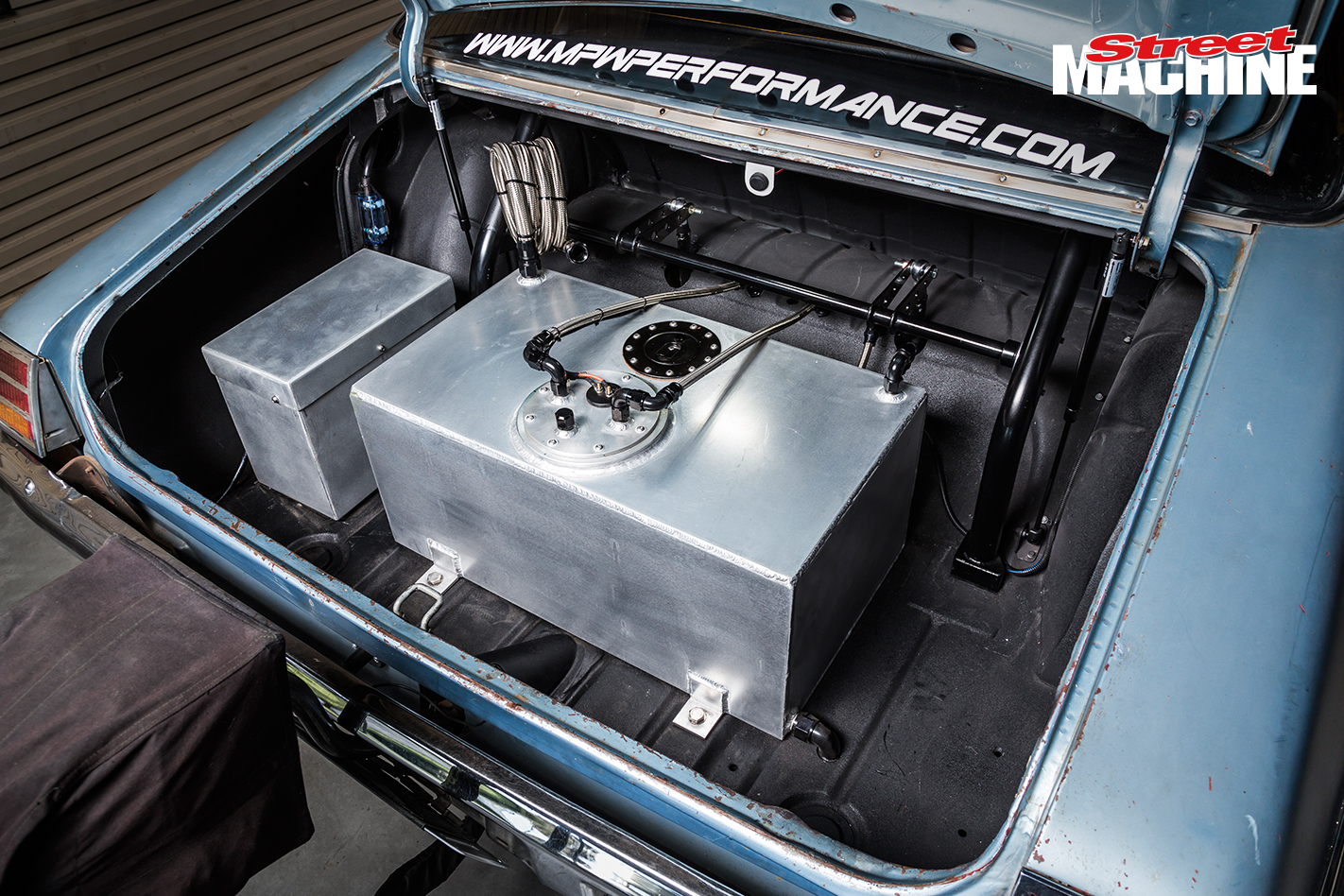 A custom Proflow intake manifold was modified by Mark Drew and mounts Bosch 1650cc injectors and Holley fuel rails to correctly disperse the E85, while a 92mm Aeroflow billet aluminium throttlebody controls the air intake following a detour via a hefty front-mounted intercooler. The brains of the operation is a Haltech 2500 Elite ECU that works in conjunction with a Haltech/Racepak digital dash and sensors for just about everything. 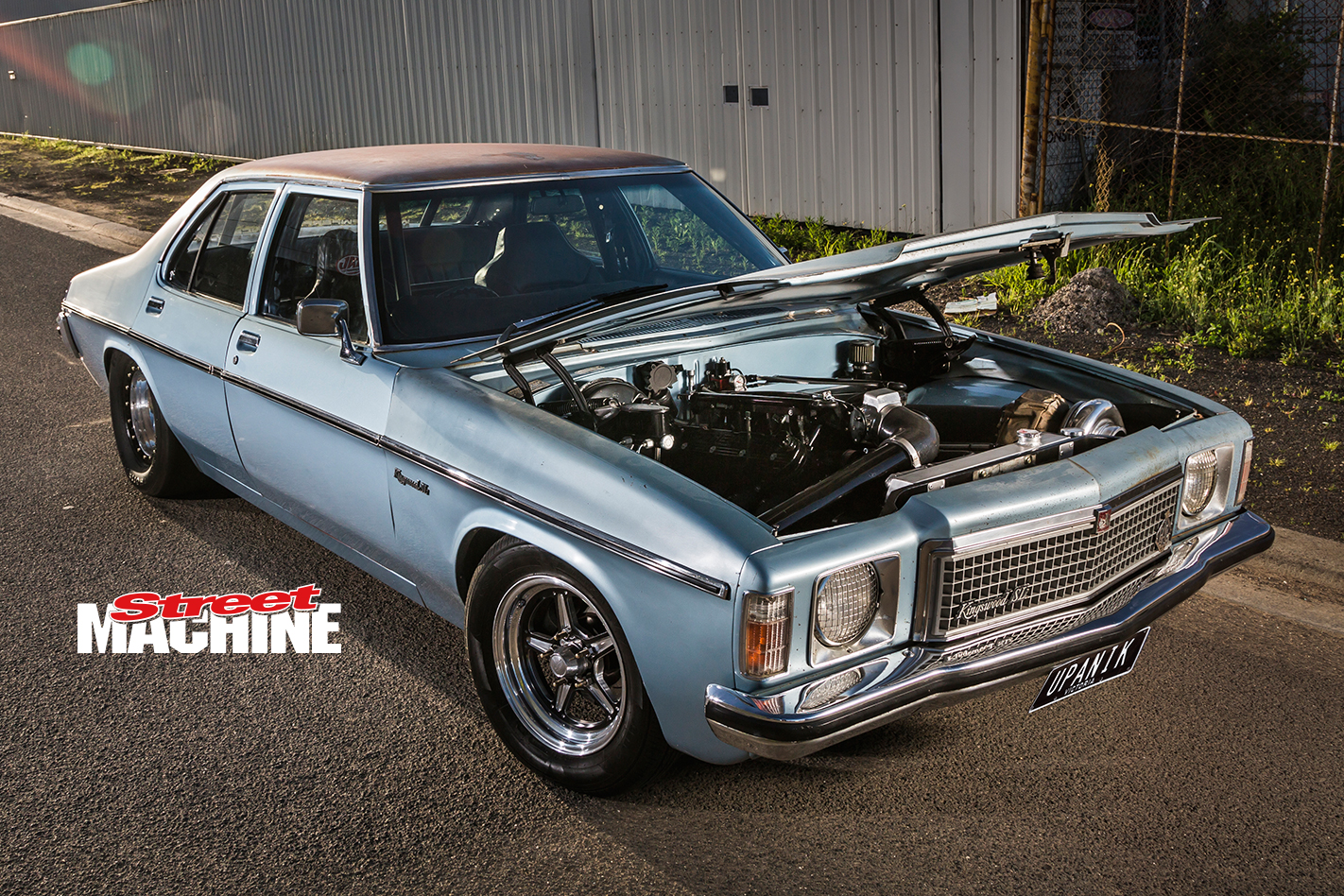 A whopping single Garrett GTX4508R turbo and 60mm Precision wastegate make the LQ9 get up and boogie, nestled into the HZ’s bay with HPC-coated 1.75-inch steampipe exhaust manifolds, with a five-inch dump pipe channelling into a twin three-inch exhaust system. Cooling is provided by an eBay-spec alloy radiator and twin thermo fans from a Ford Mondeo (the latter surprised me; I was sure Mondeos had nothing positive to offer), while a brace of chassis-mounted LS3 coil-packs light the fire. 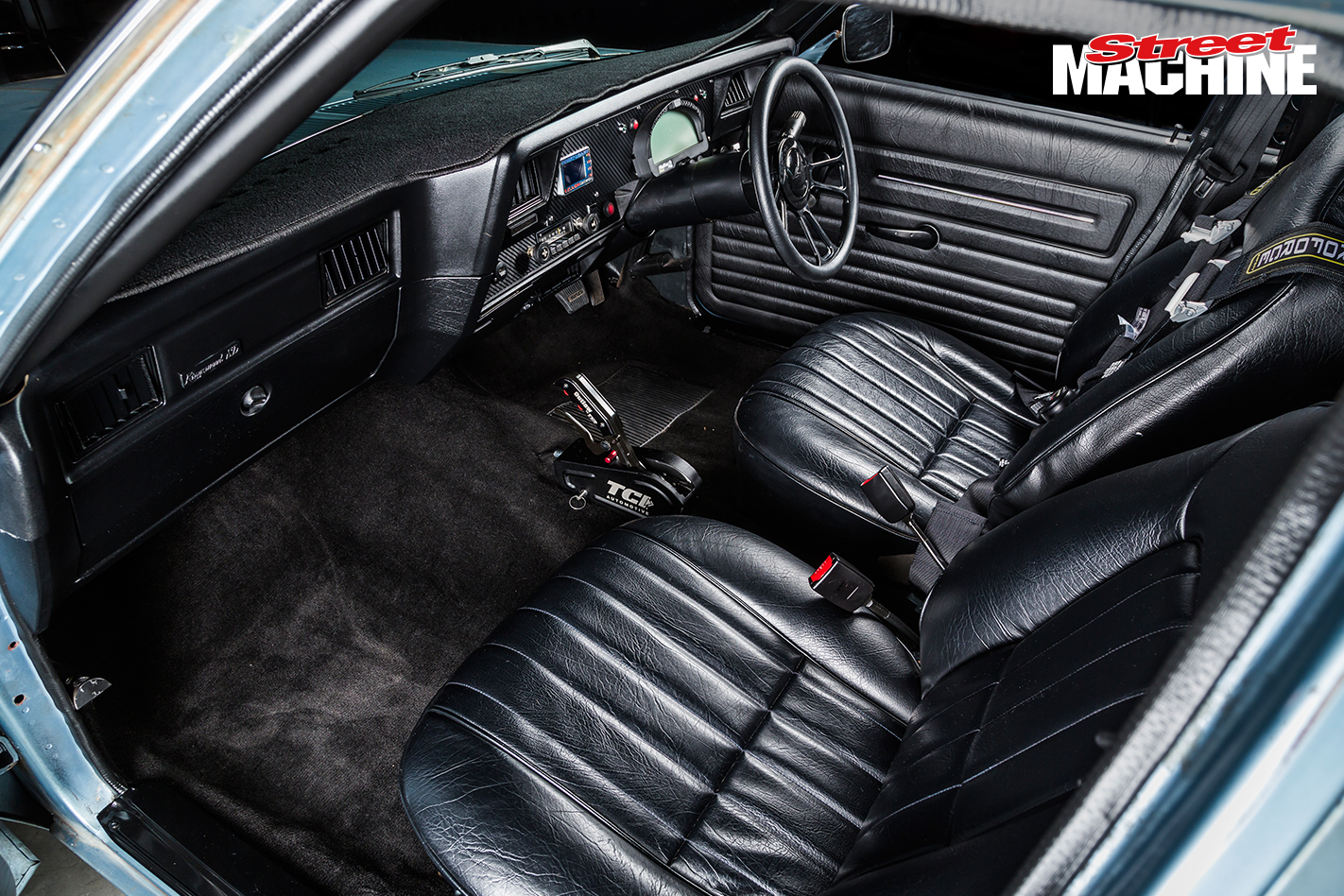 An FTI Level 5, full-roller, Reid-cased transbraked Powerglide transmission might be a mouthful, but that’s what happens with a 2000hp rating. It’s fronted by a TCE 3200 converter and Meziere billet flexplate. An A1 3.5-inch tailshaft with Strange yokes offers a similar horsepower rating and was supplied by DTM Transmissions in Geelong. Out back, an Aikman Engineering braced sheet-metal nine-inch housing is filled with a Strange nodular centre and alloy pinion support, and a full spool mounts 3.25 gears and locates 35-spline axles. 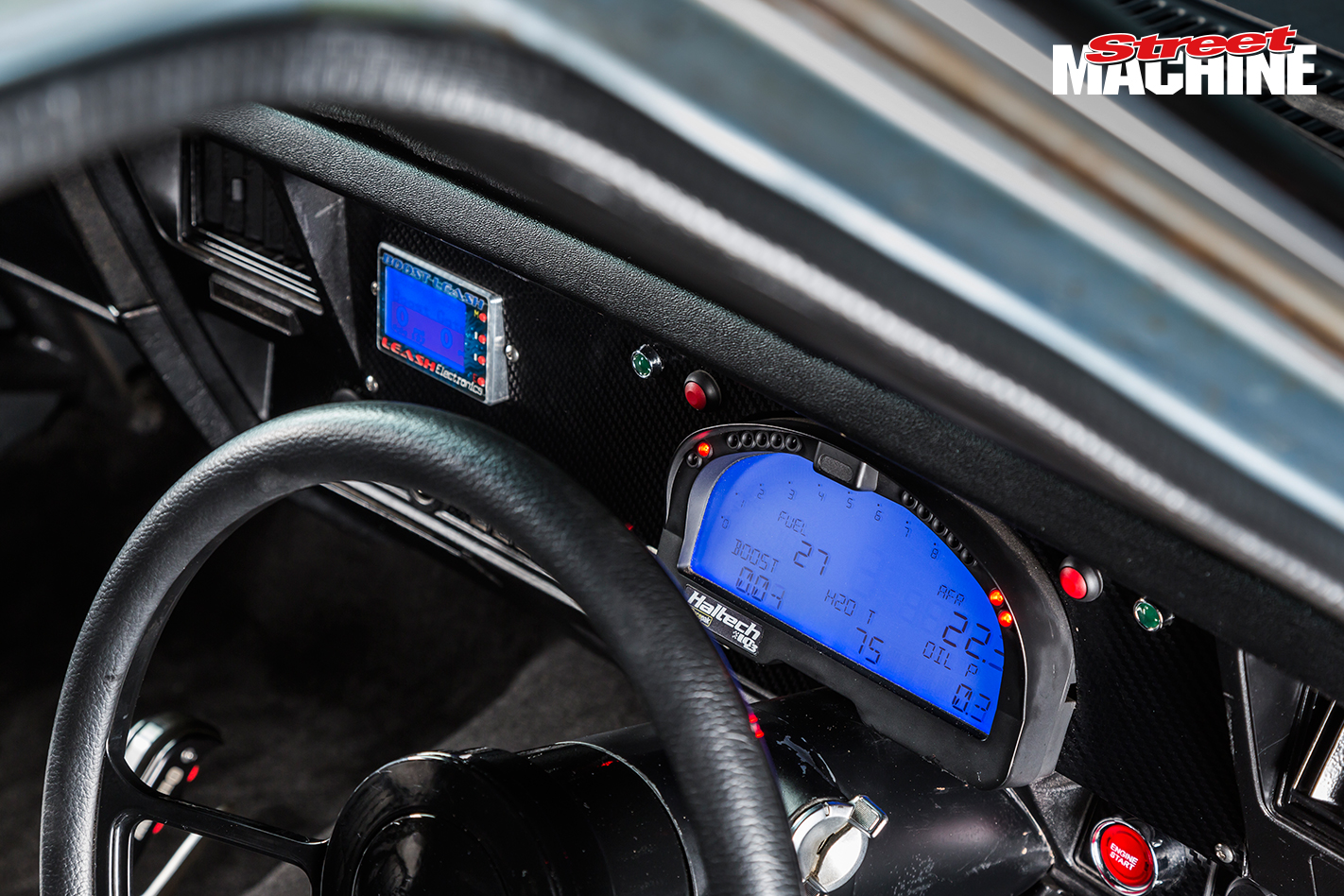 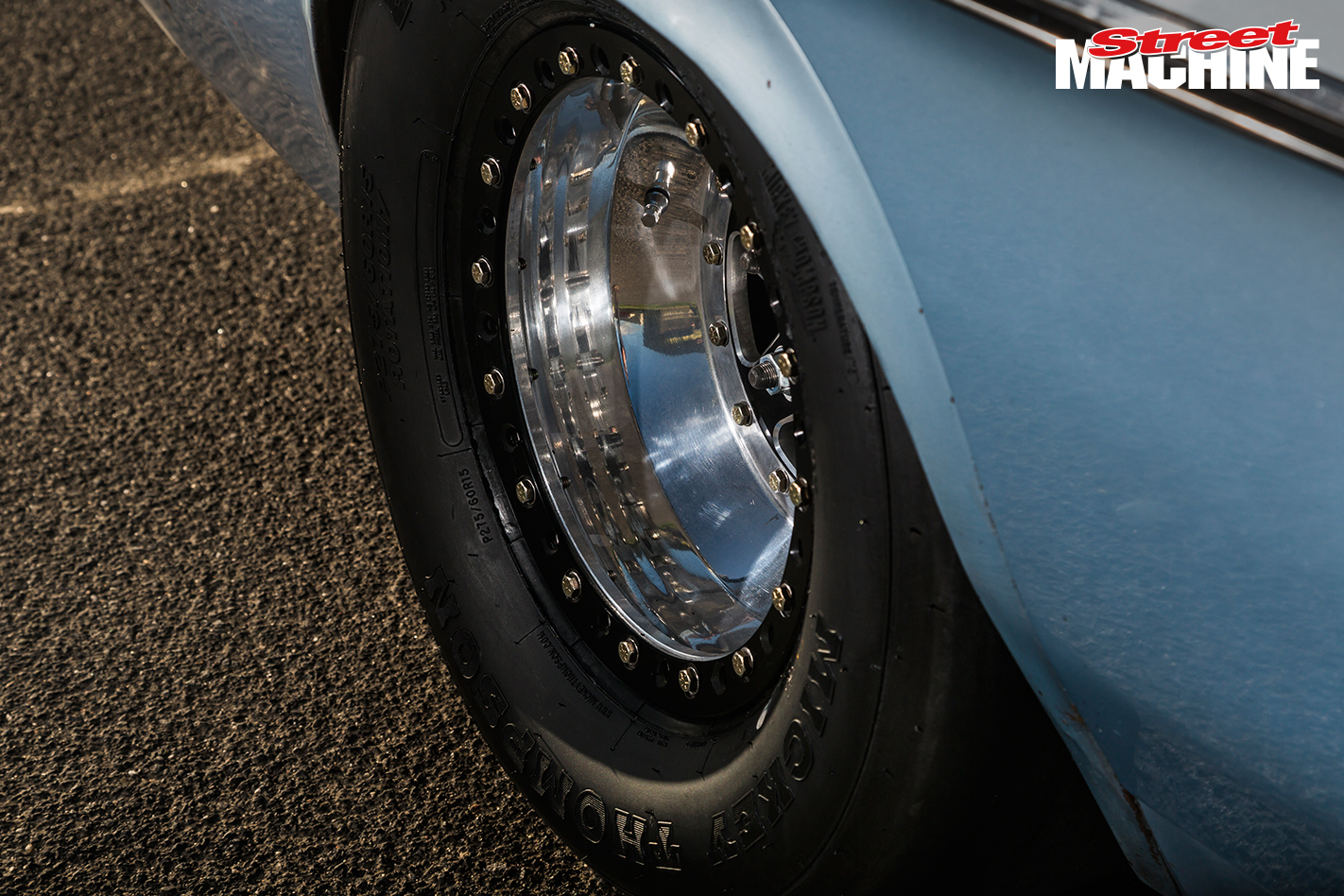 Jesse earns a crust as a boilermaker and steel fabricator, so was more than qualified to notch the rear rails and modify the boot floor for diff housing clearance, while mini-tubs were necessary to house larger Mickey Thompson 275/60 Radial Pro meats on 15x9 Weld AlumaStar beadlock rims. Billet Specialties 15x5 Street Lites support the front end and run Nankang 185/65s for good measure. 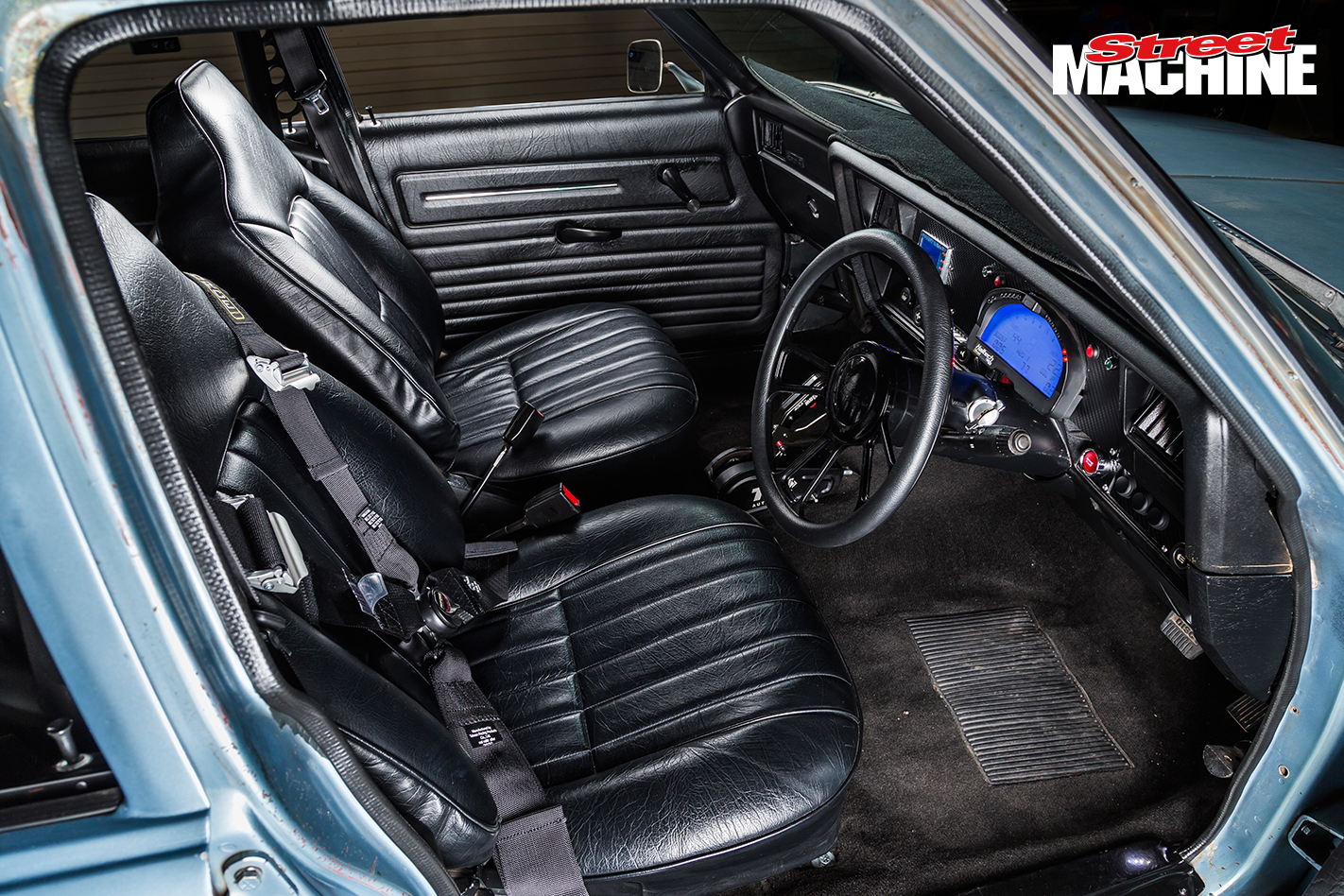 The interior has been retrimmed in black along factory lines by Bec Lloyd, with a Billet Specialties wheel and TCI Outlaw shifter replacing the old boiled-egg HZ twirler and column assembly. The rollcage is extensive and is again more evidence of Jesse’s fabrication skills, along with the help of good mate Jake Bradley. “Jake and I built and welded the entire ’cage, which includes removable intrusion bars, underfloor and underdash bars and a parachute mount,” Jesse says. “I was fussy on fitment too, as I’m a tall bastard so I needed it to be comfortable for both the street and the strip.” 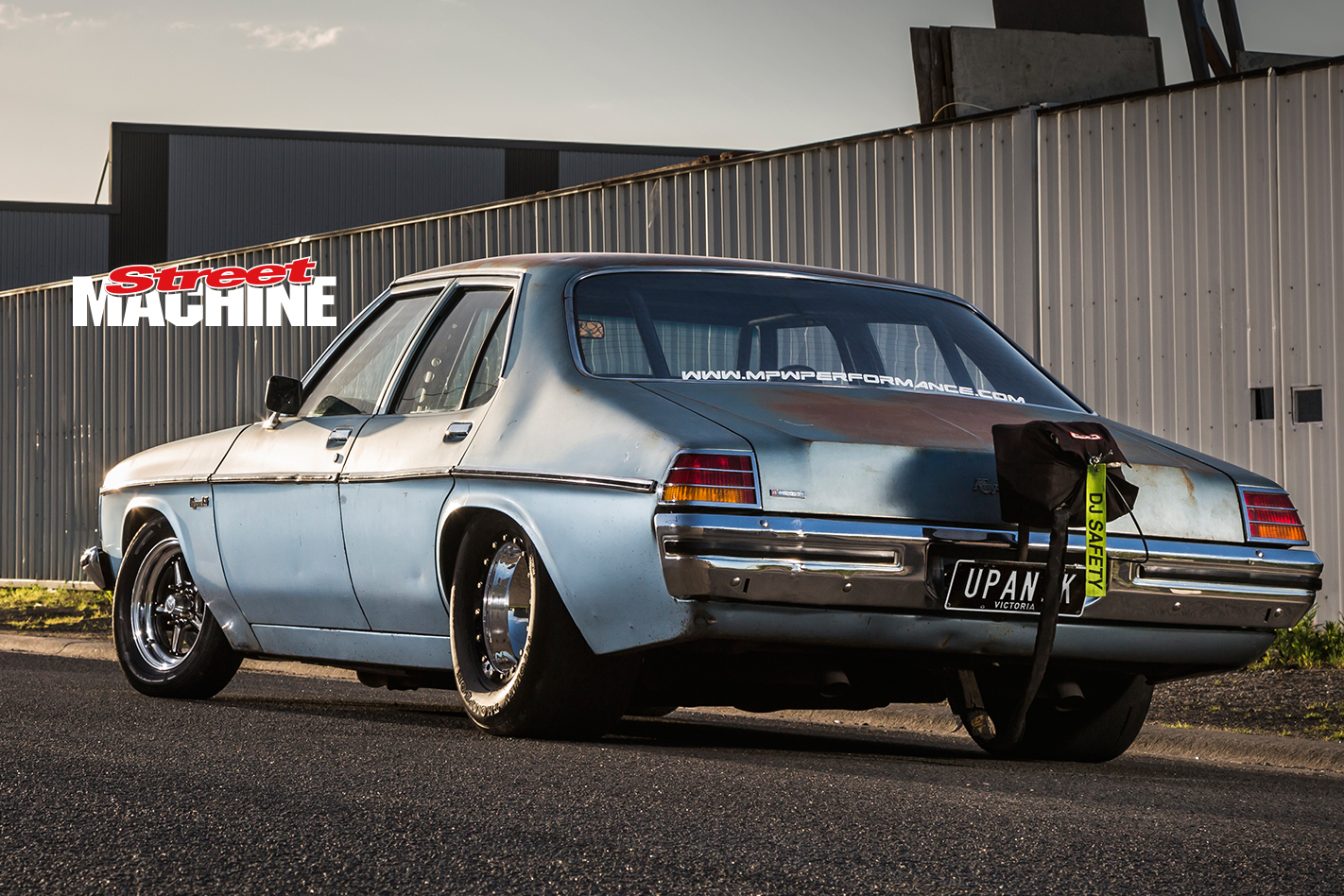 As you may have noticed, the Atlantis Blue exterior remains as-bought with 40 years of weathering left intact. The firewall was flattened and the inner guards smoothed to add some bling, before being painted by close mates Luke Foley and Brendan Cherry. Neither are strangers to the pages of SM as stalwarts of Drag Challenge and owners of a turbo LS-powered VH Commodore and HK Monaro respectively. They played more of a role in Jesse’s build than they probably realised: “I watched a lot of my friends like Luke and Brendan breaking stuff and finding the limits with certain parts; their guidance made it easier to build mine and do it properly first time ’round,” Jesse says. “I ended up buying then selling quite a few parts before they were even fitted, and learning from their experiences has no doubt saved me many headaches.” 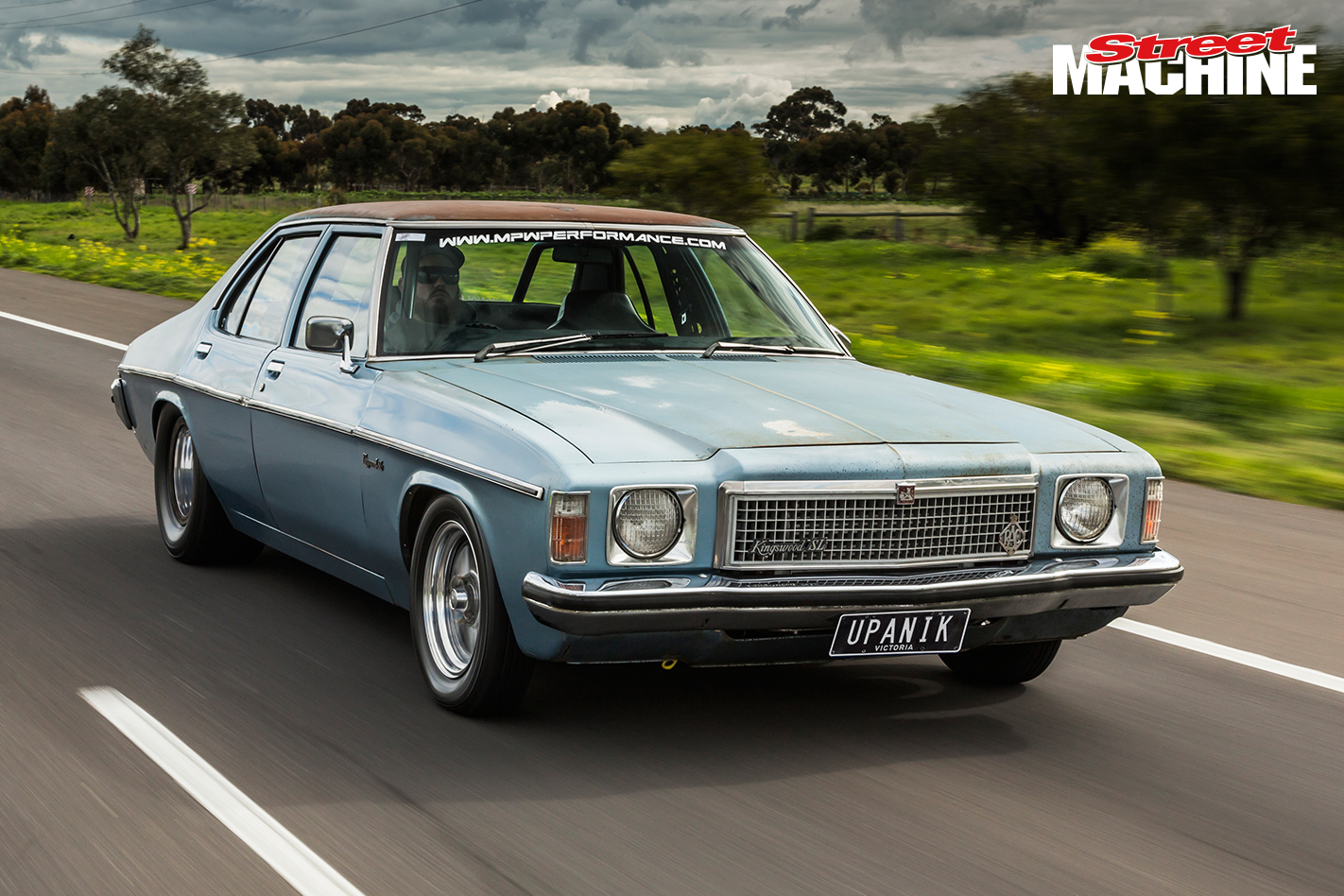 That’s not to say the HZ project was all sunshine and lollipops, but Jesse had a great team of friends supporting him in the lead-up to Street Machine Drag Challenge 2016 and during the event itself. “I went as crew for Luke back in 2015 and I knew immediately what the HZ was being built for. I entered for 2016 but had been terribly sick leading up to event and off work for nearly three months. My mate Ryan Schmock put up the coin for the entry, and he and my wife Daniela kept me on track and gave me so much help to get the car ready in time. Adam Rogash and Luke Foley from MPW Performance tune the car, and although I do the spanner work myself, they are only ever a phone call away if I need advice.” 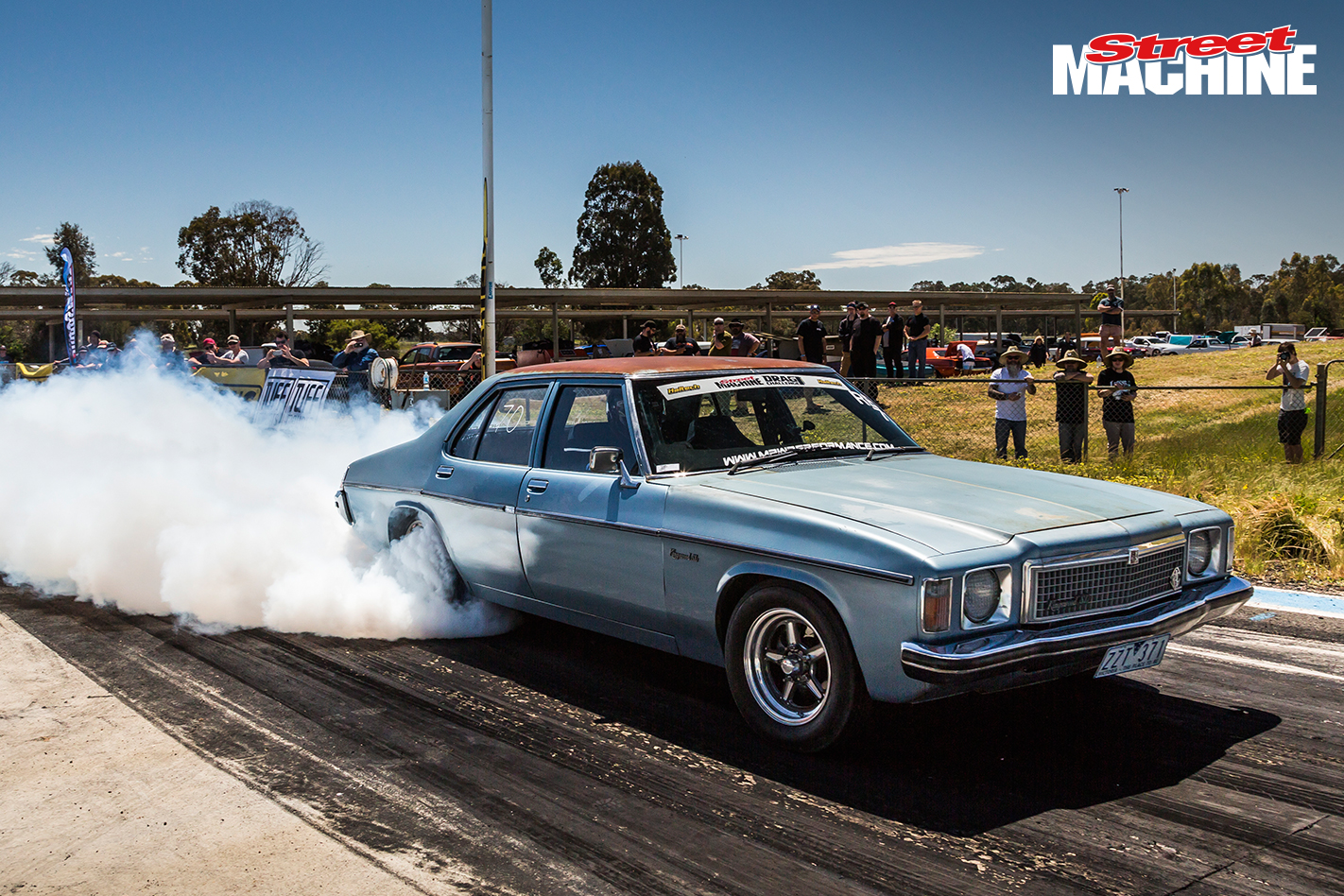 Jesse made it to Drag Challenge only to find he was struggling to get traction. Crappy weather leading up to the event put a kibosh on any thorough testing, and the best he could manage in the early stages of DC was 9.20s. 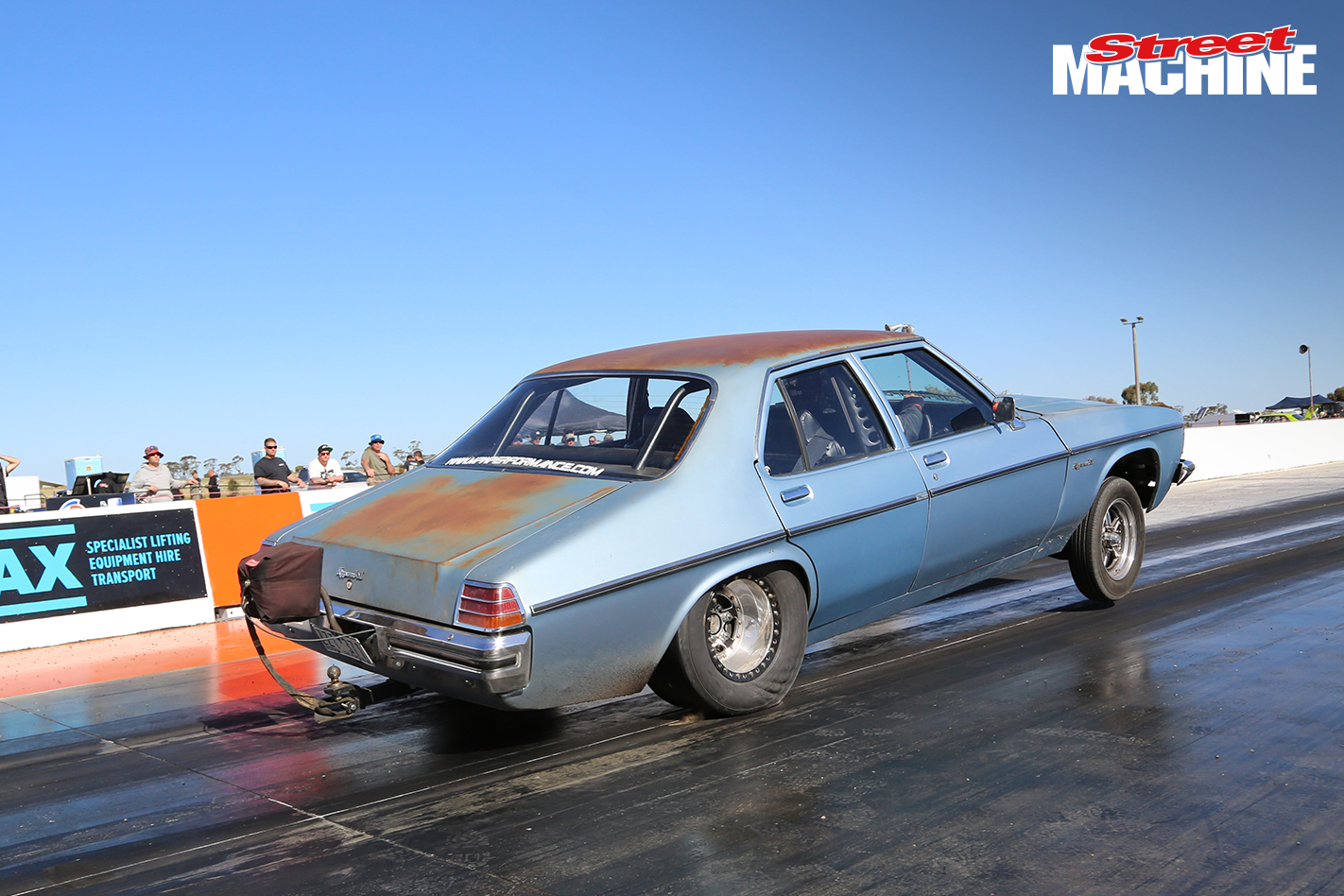 “It kept blazing the tyres, which was totally out of character,” he says. “By the end of Day Three it was getting frustrating so I went and spoke with Kyle Hopf from 6boost who was crewing for Terry Seng and explained the situation. He knew just by looking at it – I’d raised the back end to tow the trailer and Kyle was adamant that I drop it back down and try again. Sure enough, it went 8.98@151mph on Day Four at Swan Hill. I just wish I’d spoken to Kyle on the first day!” 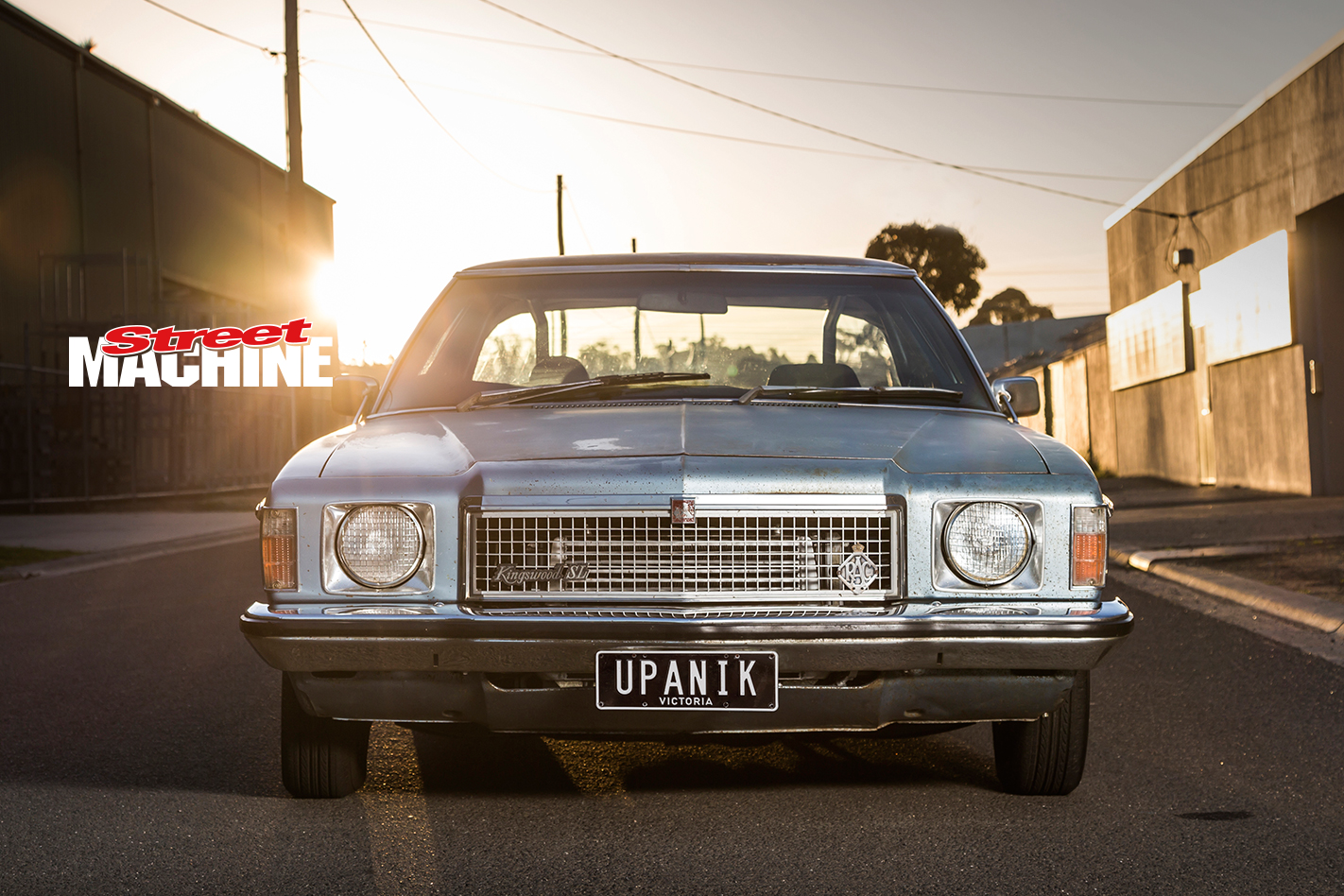 Jesse’s only real plan for the HZ is a return to Calder, where he hopes to run an eight. “It’s my home track,” he says. “The planets haven’t aligned yet for me there but I really want that Calder timeslip with an eight-second pass. Then I’ll probably build something new, maybe another VN-VS Commodore. The HZ tips the scales at 4000lb, so I need something lighter. I love this old girl, but I want to go quicker so it’s time to start looking at other options.”