All Alex Moshopoulos wanted to do was run an eight and drive home, and with this ballistic 1300hp XY Falcon, he can do just that

WITH an 8.60@158mph from his tough XY Falcon at a recent Calder outing, Alex Moshopoulos can now tick ‘Run an eight and drive it home’ off his bucket list.

“I’ve been chasing it for a while,” a very satisfied Alex says of breaking the eight-second barrier. “I always knew the car had it in it. In fact, I think it’s got an 8.40, maybe even an 8.30 in it. You have to get the right night; the track has to be prepped properly, and the air has to be good as the turbos definitely love the night air. It also has to be a night when you can get enough runs.” 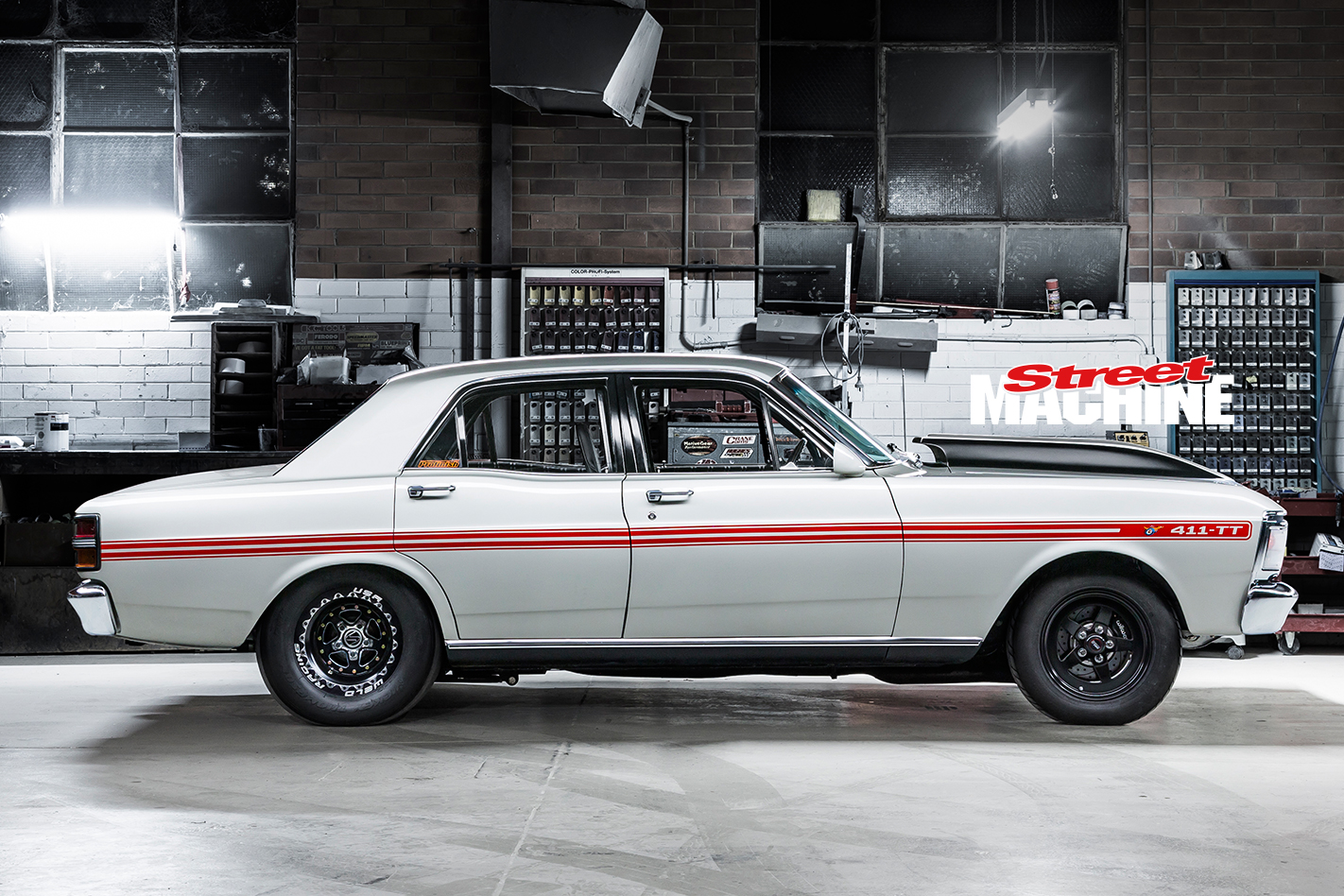 By ‘a while’, Alex actually means five years. Not being able to get to the track as often as he’d like, it’s taken that long to get the combo dialled in. “In the early runs I was just blowing the tyres off it,” he says. “We calmed it down and ran a 9.10.”

At that point the officials paid Alex a visit, informing him he couldn’t run again until he got the car ANDRA-teched, which took quite some time. Once the car was all legal and signed off, the ETs started to drop whenever conditions were good: 8.90, 8.70 and then the 8.60. “I was stoked,” Alex says, “especially with a 1.29-second 60-foot. The car runs as-is: full glass, full interior. At 3700lb (1680kg) it’s pretty heavy, so I don’t think it can go any better than 1.29.” 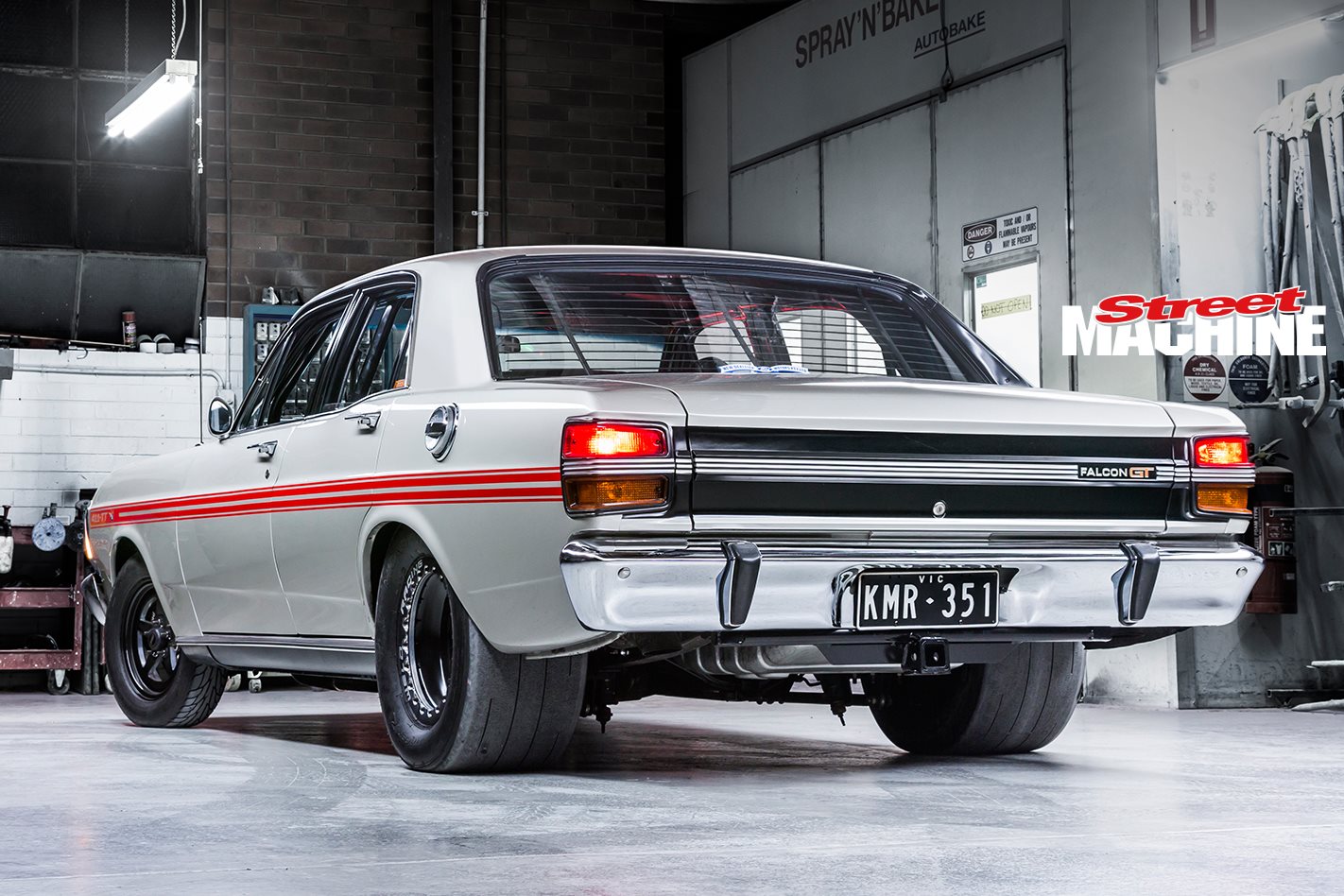 Given the XY’s propensity to lift the wheels for the first 10-15 metres, it stages at 7psi and launches at 3500rpm, with boost quickly ramping up to 15psi once the transbrake is released. As soon as the front wheels touch down, Alex hits the button on the steering wheel for full boost. On the 8.60 run, the datalogger showed that ‘full boost’ was only 17psi, not the 20psi it was pushing when it spun the engine dyno ’round to 1288hp – which it backed up with a 1005rwhp run on the chassis dyno. “Next time out, we’re running the full 20psi,” Alex declares. 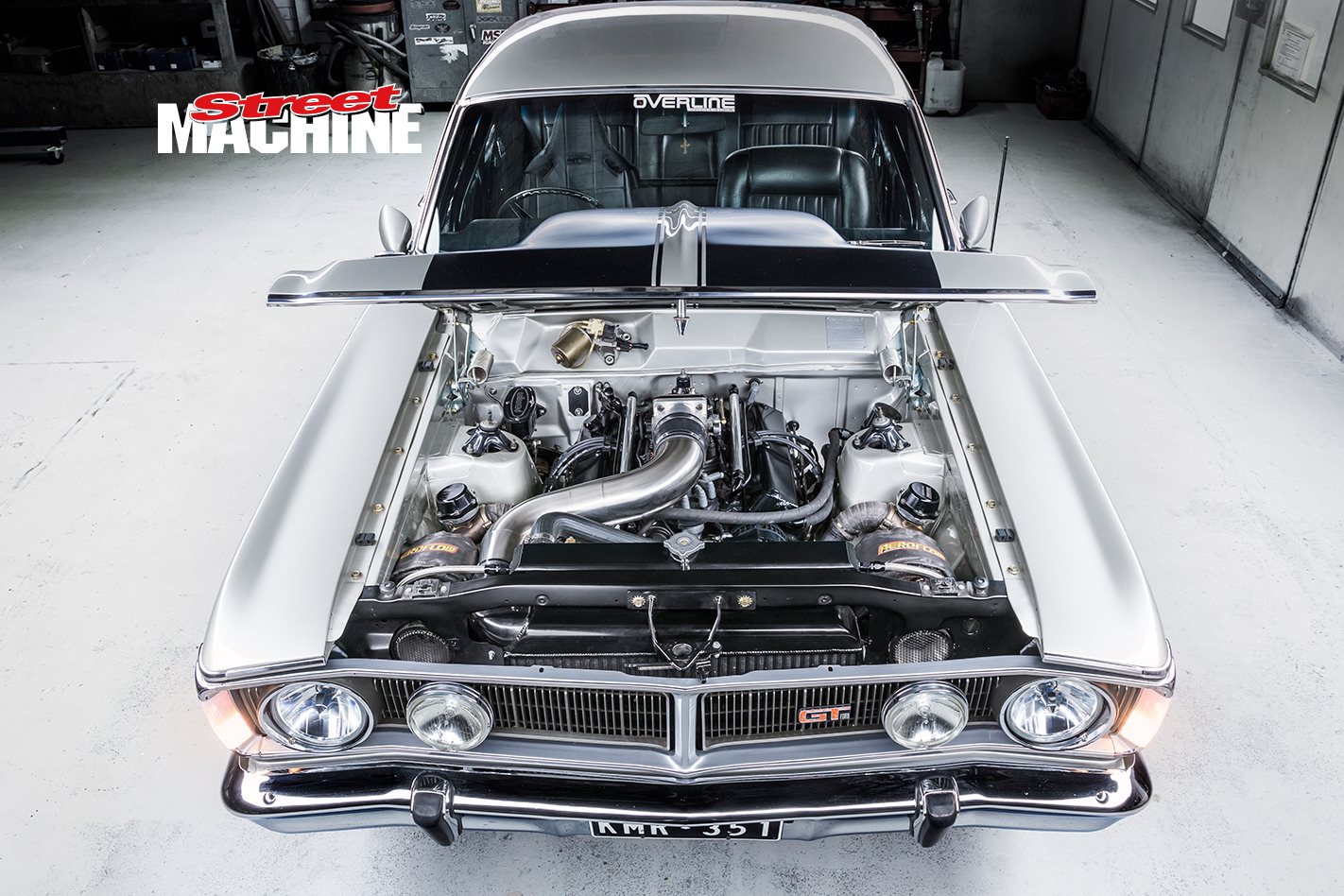 Creating all this haste is a twin-turbo 411-cube Dart Windsor, screwed together by Zoran at Competition Engines. “I went to Zoran because I knew he was capable of building what I wanted,” Alex says. “Also, a lot of my mates are customers. In fact, one of my mates still has the first motor Zoran ever built.” 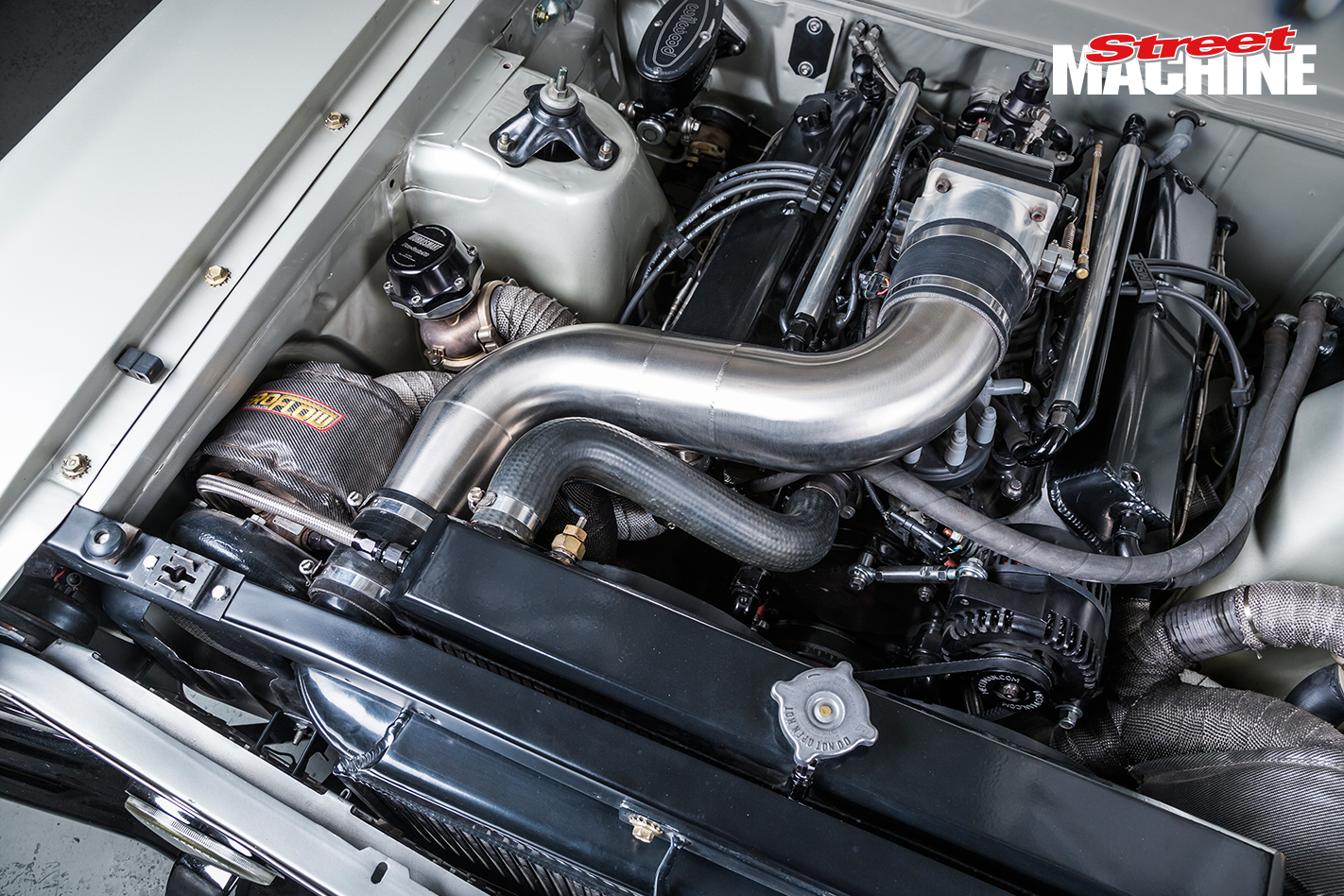 Based on a 9.5 Dart Iron Eagle, Zoran filled the donk with the very best internals, including a Crower roller cam ground to his specs, all topped with a pair of heavily ported 220cc AFR heads. 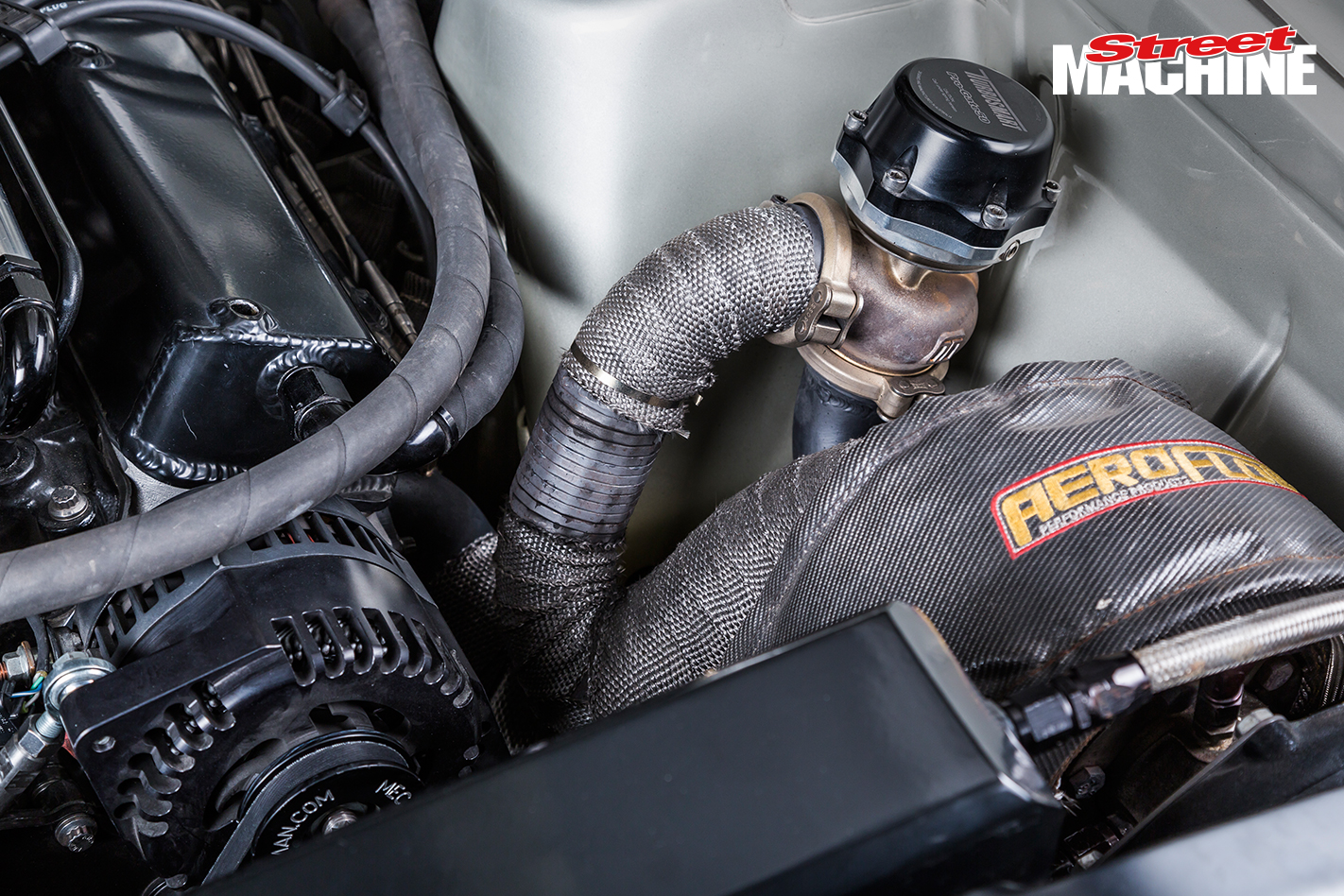 Fuelling the beast is an EFI set-up featuring 1600cc injectors mounted in a Edelbrock Super Victor manifold, with a Wilson elbow and a giant 105mm Wilson throttlebody. Controlling it all is an Autronic ECU. “The Autronic is good, but it’s old,” Alex says. “It was bought a long time ago. But my tuner plays with them all – Haltech, MoTeC, etc – and he’s confident we wouldn’t gain anything by updating it.” 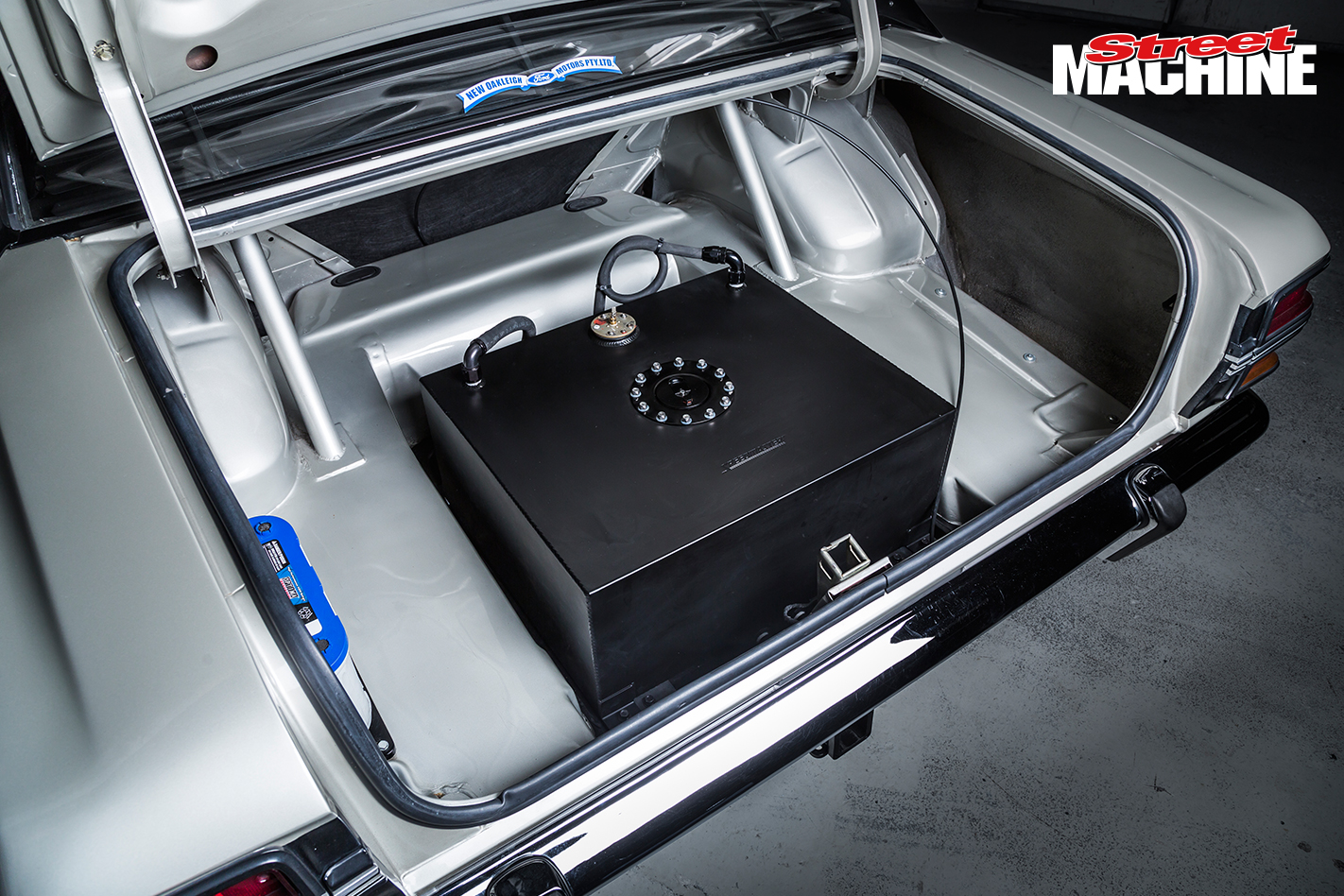 Running through the EFI is a staple diet of United E85. Alex lives in Dandenong, Victoria, an E85 hot spot, so he simply fills up at the local – no drums necessary. What was necessary was stepping up from a 57-litre tank to a 75-litre jobbie; the extra capacity maintains range while burning 28 per cent more fuel.

The most amazing thing about this combo is its two Garrett GT3582R turbos. “They’re tiny,” Alex says. “Essentially they’re the same as a factory XR6 turbo, but externally gated. They’re equivalent to a 62 or 64mm and are pretty much maxed out.” 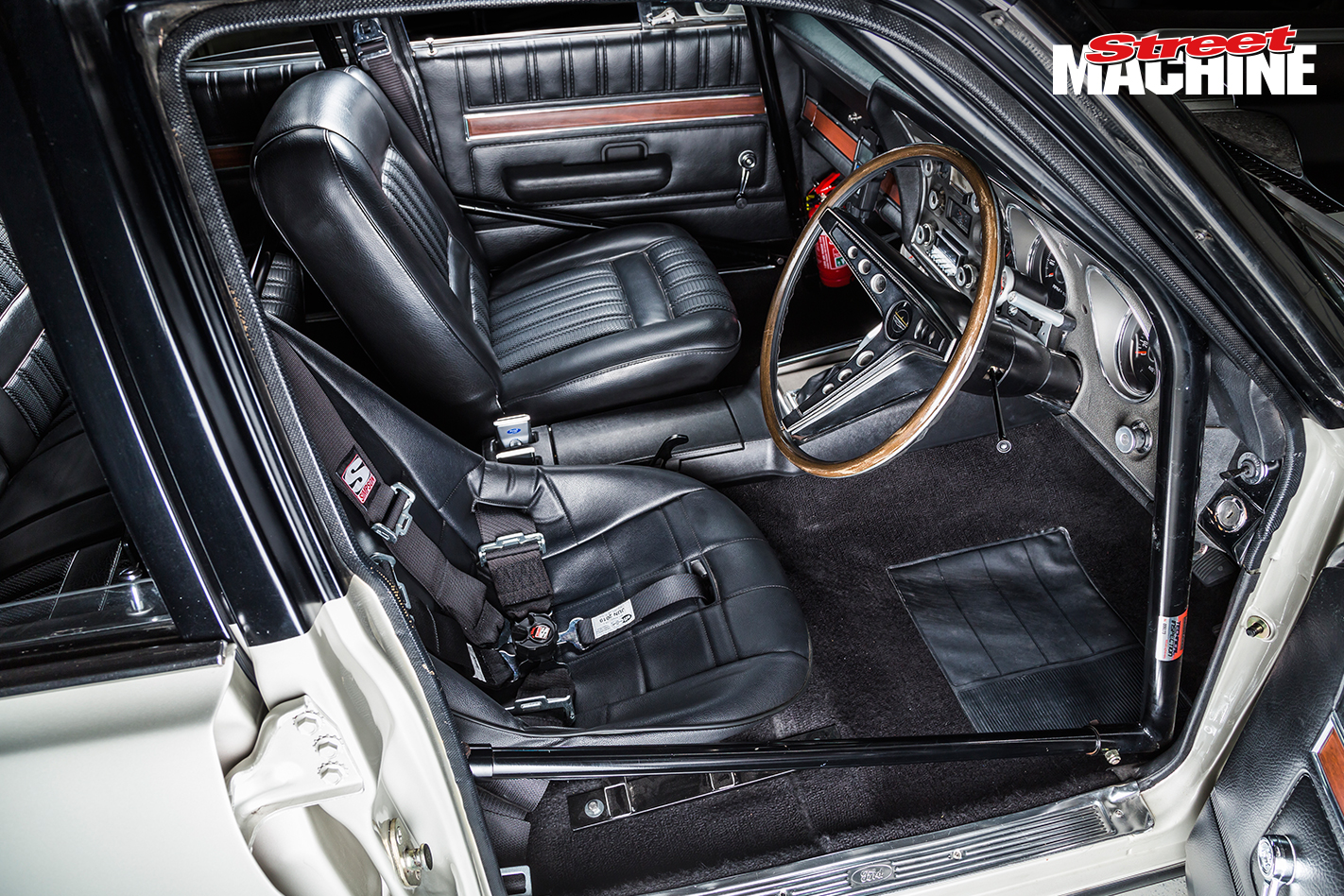 The turbos are water-cooled via an electric pump mounted low in the front, with the return lines running back into the radiator’s top tank. “Everything is pretty tight in there,” Alex says. “No booster makes it much easier to do the plugs and adjust the lifters. Anything else, especially to do with the turbos, and I cringe!” 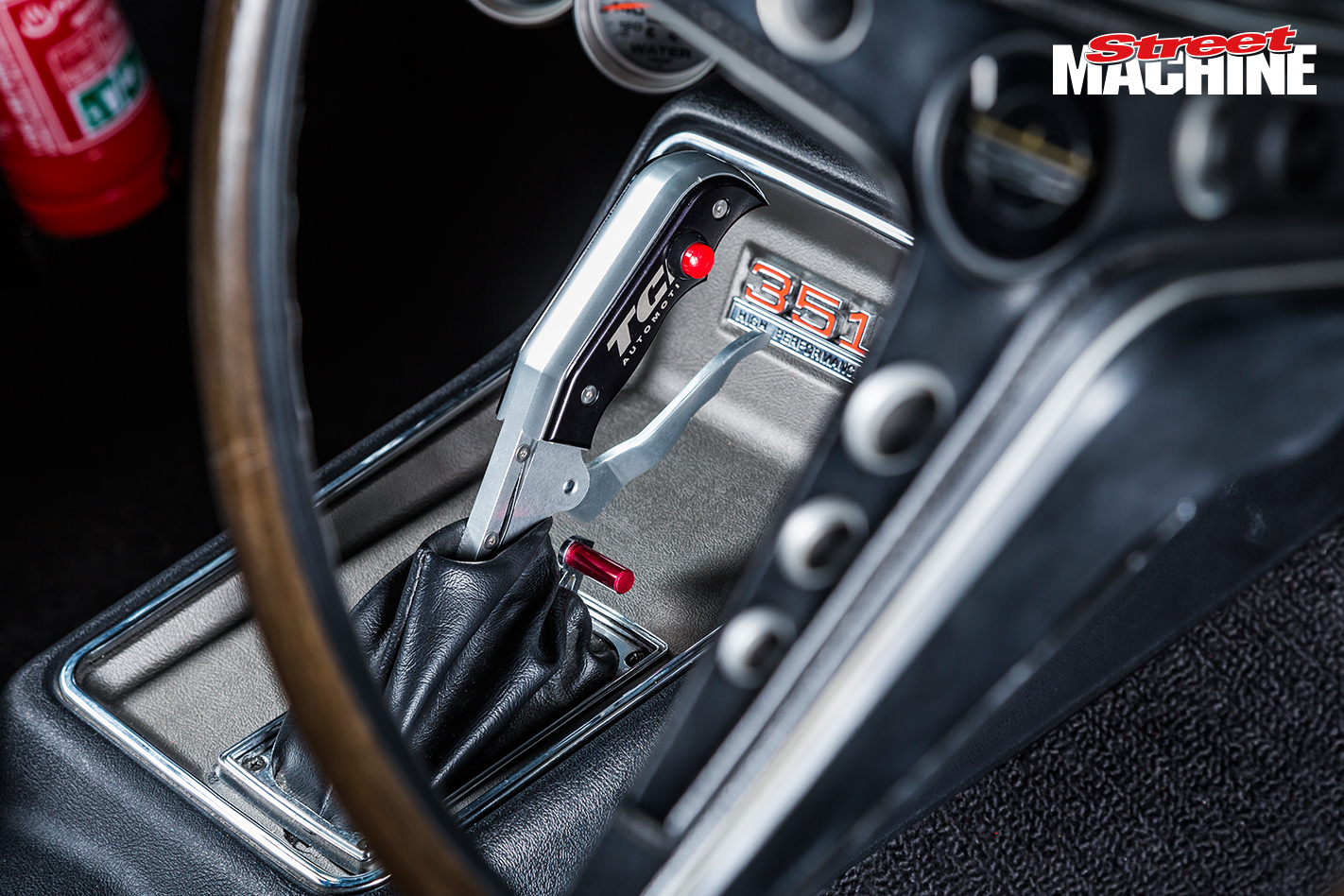 Race Radiators TIG-welded up a 75mm-thick intercooler to chill the inlet charge, along with a burly alloy radiator. However, adding the intercooler left nowhere for the factory bonnet catch to mount. Fabrication whiz George Papa solved the problem with a very elegant custom-made catch mount. “George has done a lot of fabrication on the car,” Alex explains. “He did all the hard work: tubs, rollcage, chassis connectors, anti-roll bar, mounted the race seat and more.” 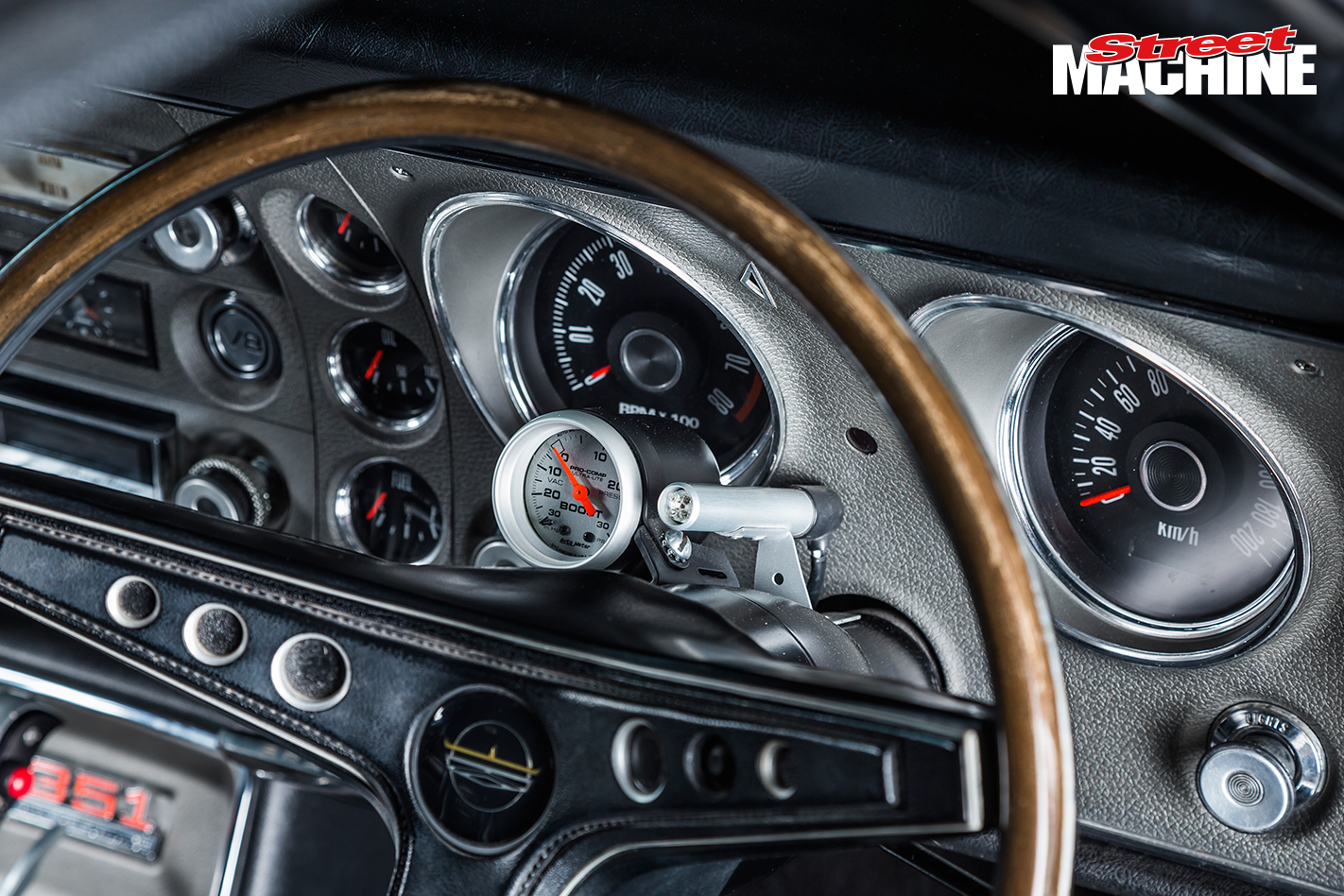 While Alex has a long list of people to thank, the reality is he did most of the work on the car himself. Being a beater/painter by trade, this included the bodywork (with help from George Mandalis and Chris Cossigny) and laying on the Quicksilver duco – a factory GT colour. “The whole thing was built at home in the garage on the ground – before I had the luxury of a hoist,” Alex says. 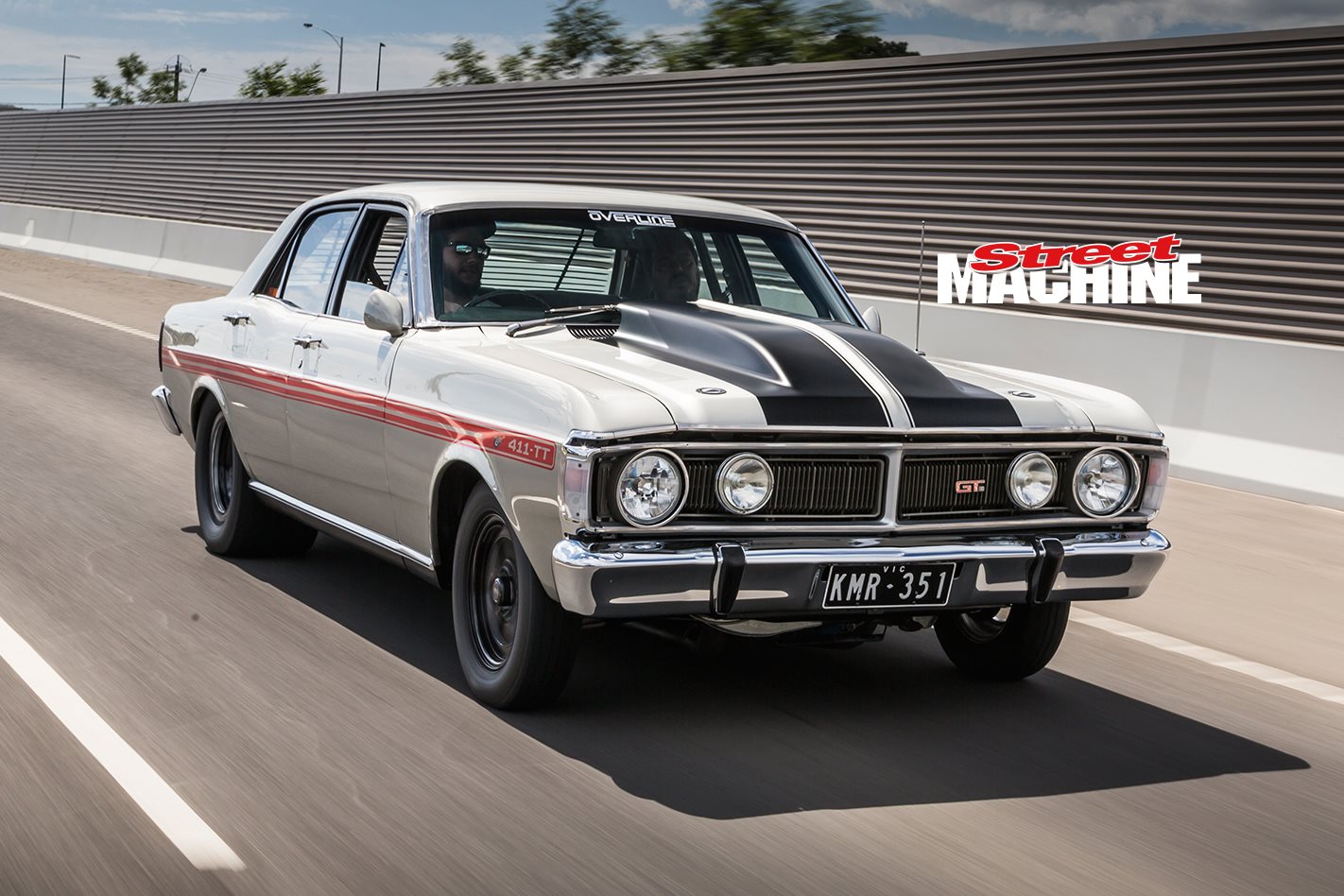 Transmitting all that grunt is a Reid-case Powerglide equipped with 10 clutches, Vasco input shaft and SDE 10.5-inch converter. Aft of the ’Glide is a 35-spline Strange nine-inch filled with 3.5:1 gears. Suspension-wise, the inboard-mounted Calvert mono-leaves and same-brand shocks certainly put the power down – as verified by the 1.29-second 60-foot times. The front end also sports Calvert shocks in combination with Pedders springs. 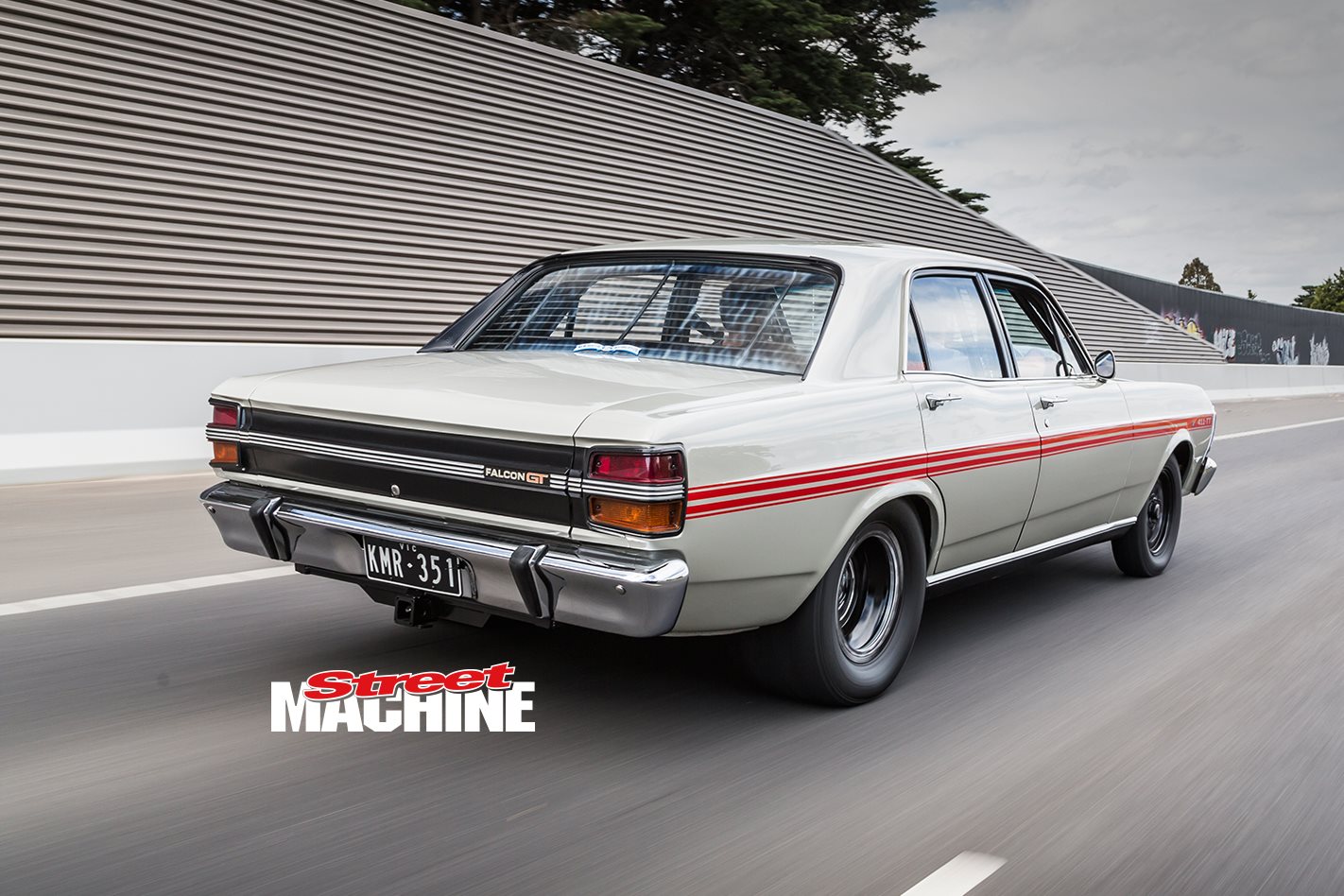 Although capable of near light-speed, Alex wanted the XY to be somewhat subdued. That’s why the six-point ’cage was painted black, to blend in with the GT-style interior. Same goes for the black radiator and intercooler.

“It’s a street car,” Alex says. “I drive it every chance I get – to the pub, out for dinner, even to the beach at Rye. If it’s a good weekend, I’ll have it out every day. At one stage I was driving it more often than my daily! In fact, it’s a lot nicer to drive than when it had a 500hp Clevo [see breakout]. With EFI, a smaller converter and smaller diff gears, it sits at 2300rpm on the freeway. And thanks to the E85, its runs 20°F cooler!” Mind you, it does fry the hides at 100km/h with ease – even with 325 boots. 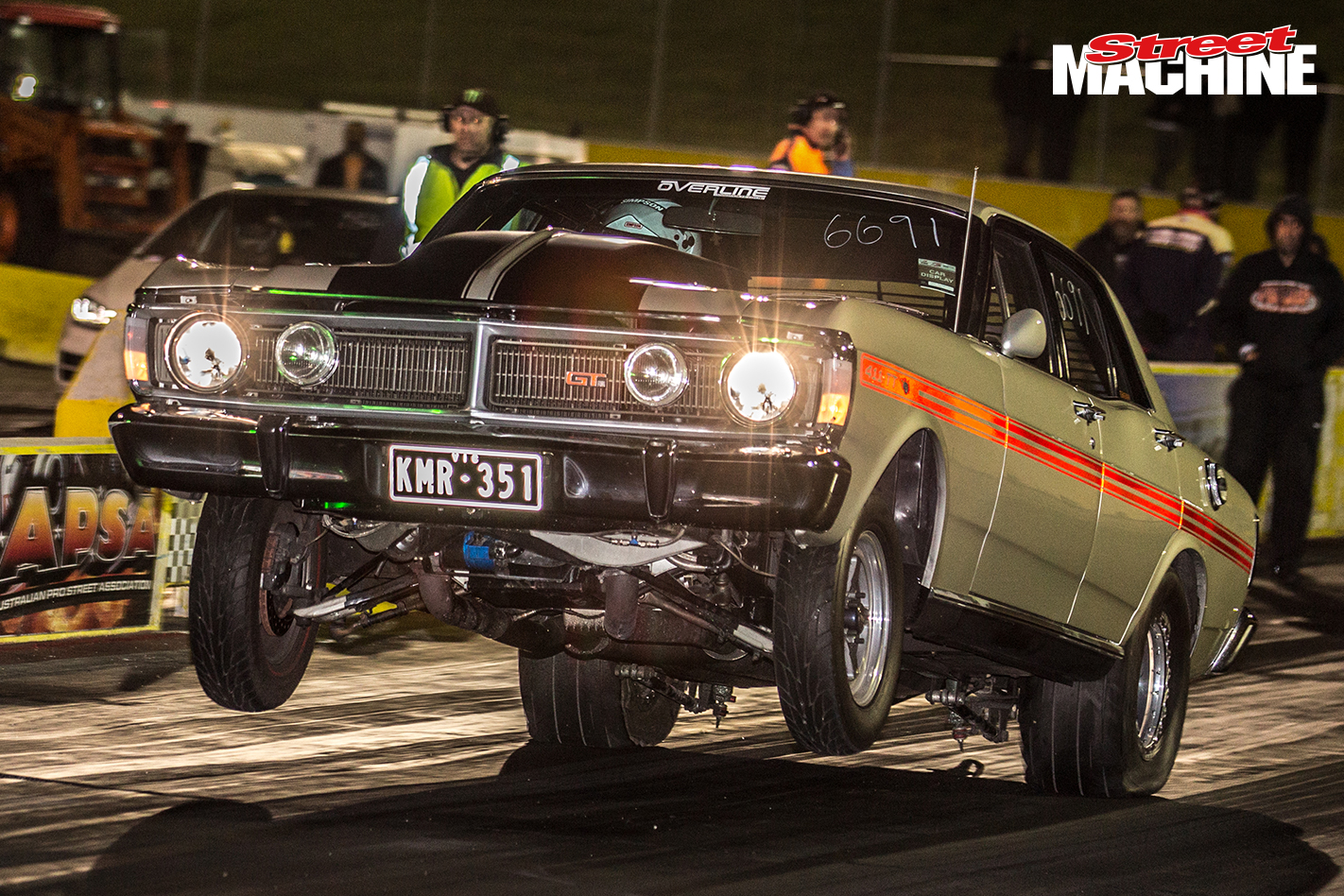 “I’ve accomplished everything I’ve always wanted with the car,” Alex reckons, “including getting a feature in Street Machine – I’m stoked!”

At just 29 years of age, Alex is one of the youngest in his wider group of car friends. But as he says: “I might be the youngest, but I’m definitely not the slowest!”