It might be humble by name, but Layton Crambrook's award-winning blown HQ Monaro GTS sure isn't humble by nature

WHEN it comes to getting the most out of an HQ Holden, Layton Crambrook knows a thing or two. He won the 2006 Australian HQ Holden Championship, after all.

The paintwork on this HQ is about as glass as it gets. The purple hue suits the shape of the ’72 coupe body well

In fact, Layton has been racing cars all his life, and was at one point the youngest-ever person to race a V8 Supercar. “I originally started racing sprintcars, but my circuit racing career started in an HQ when I was 14,” Layton says. “I went from racing an HQ to a V8 Supercar – not your typical motorsport transition!”

The real eye-catching piece is the Blower Shop supercharger proudly sticking out of the bonnet. A blown two-door HQ Monaro GTS: It’s what dreams are made of!

After finishing his time in Supercars, Layton built an HQ race car. “It was basically a show car underneath; it would have fitted in at Summernats it was that neat,” he says.

But ask any Holden fan what car they would build if they had the chance, and more times than most the answer would be: a blown two-door HQ Monaro GTS. And that’s exactly what Layton built next.

This award-winning Monaro GTS came about through Matt Cavenagh, a friend Layton grew up with in Darwin. “He saw the car for sale on Facebook, so I asked him to have a look at it for me,” he says. “The car was in good nick and had very minimal rust. It’s also a genuine two-door HQ Monaro GTS that originally came out with a 253. In the end it took about a week to get a deal together, and the car was mine.”

The polished FR19 Simmons rims are 8in wide at the front and 12in wide at the rear. The coil-overs make for easy ride-height adjustments to get the body low enough without having to hack into the bodywork to tuck the wheels under the guards. After all, this is a genuine HQ Monaro GTS

After taking possession of the Monaro, Layton had it sitting in the shed for a year while he figured out what exactly how he wanted to build it. He had an engine package put together by Steve Nicotra, but it was completed long before Layton had even started to prepare the shell. “There’s always the question of: Do we make it a nice road car, or do we take it down a different path? Believe it or not, the motor is part of the reason the car ended up the way it is; you can’t have a motor look that good and not have the rest match,” Layton says.

That motor is a Dart-blocked small-block Chev stroked to 406ci, with CNC-ported AFR 210/220 heads. Sitting on top is a Blower Shop supercharger that’s fed by twin 750 Quick Fuel carburettors.

The impressive-looking mill is bolted up to a reverse-pattern Turbo 400 gearbox running a 4000rpm Dominator stall converter. Power is sent to the rear wheels via a shortened nine-inch diff with Truetrac and 3.55 diff gears.

There are fewer things more appealing to the eye than a blown small-block. The motor in Layton’s two-door HQ is a work of art, and it turns the rear tyres to the tune of 761hp

Layton’s aim was to keep the HQ looking authentic, so all of the car’s original badges and trimmings were cleaned up or replaced. “I didn’t want to have the outside looking modified. Well, maybe except for the blower hanging out the bonnet,” he laughs.

The Quey’s exterior wears Amethyst Metallic paint, prepped and painted by Pauly Restorations. The car came out of the factory as a purple 1972 HQ Monaro GTS with white trim, and that’s how Layton wanted to keep it.

At a recent Powercruise meet, Layton used that 761hp to fry eight sets of tyres and use up 250L of fuel!

“I flew my mate Nichlas Livsey down from Darwin to do the wiring on the car. He was only meant to stay for a week, but he ended up staying for four,” Layton laughs. “He helped immensely. He came up with ideas such as installing electronic power steering and relocating the battery under the dash. These small touches made the car special, and I thank him for that.”

The interior of the HQ has also been freshened-up with white leather throughout, along with electric CV8 Monaro seats for the front two occupants. “The goal was to keep the interior as usable as possible. I didn’t want custom consoles and stuff like that,” Layton says. “I wanted to put car seats in the back for my kids. It had to function but also look nice.”

The undercarriage is also very, very neat. Originally Layton had planned to black the car out underneath, but again, that in-your-face blown small-block dictated that the HQ deserved better.

It’s been a busy year for Layton and his HQ. The car was crowned Grand Champion at Red CentreNATS 2017 – beating current Summernats Grand Champ Mark ‘Happy’ Williams’s 2HAPPY HQ ute – and also bagged People’s Choice. The car also did very well at Summernats 30, making the Top 60 in its first year, as well as at this year’s Gazzanats in Darwin, winning Best Undercarriage, Race Ya Mates, and the Go-to-Whoa.

The car has only run down the drag strip twice, lazily managing a 12.08 at Red CentreNATS in full street trim. Layton is quietly confident that the HQ’s set-up will easily run into the 10s down the track; after all, it does produce 761hp.

“We went to Summernats 30 to drive around and do some burnouts,” Layton says. “It wasn’t until we were sitting in front of the judging pavilion that I asked Owen Webb: ‘What do we have to do to get the car judged?’ He simply replied: ‘Line it up and we’ll take a look.’”

The front CV8 Monaro seats were chosen for their stylish contours and comfort. The white leather trim is a nod to the car’s factory purple over white combo. Layton insisted that the HQ stay true to its roots

Layton is presently tidying up the car for Summernats 31 with a focus on fixing the areas he feels will help give him the best chance of further success. This time around he plans to have a stand set up, as well as some mirrors underneath. He’s also keen to give all of the driving events a nudge.

Layton isn’t afraid to use his showpiece Monaro either; he spent three days at Powercruise Sydney this year and chewed through eight sets of tyres and 250 litres of fuel. He reckons the car is a dream to drive around the track – no surprise given he used to set HQs up for circuit racing – thanks to coil-overs at all four corners, as well as Wilwood 355mm discs and six-pot calipers up front.

“I don’t think we’d ever sell it,” Layton says. “I want to get a different manifold made up just so we can take the blower off and drive it without any headaches. I actually have dreams of taking it to Drag Week in America. I’m not a drag racing person, but there’s something about that adventure I’m very keen on. The car’s no seven- or eight-second car, but it’s fast enough and I’m up to having a bit of fun with it.”

Layton says that he couldn’t have built the car without the full support of his family. “I couldn’t have done it without my wife. She’s awesome; she supports me in everything I do. We put the kids’ car seats in the back and go to local car shows; the kids love it, and we love it. If we’re lucky enough to win a prize they fight over who can keep the trophy in their room for the night before it goes on display in the games room.”

Presently Layton is building a four-door HQ that will mimic the look of his coupe. “It’s in the spray booth as we speak,” he says. “We want a matching pair of HQs; same colour, same wheels. It won’t be the same calibre of car as the coupe, as it won’t run a blower, but the paintwork, wheels and trim will be equally as good.” You know what they say: Two is better than one. 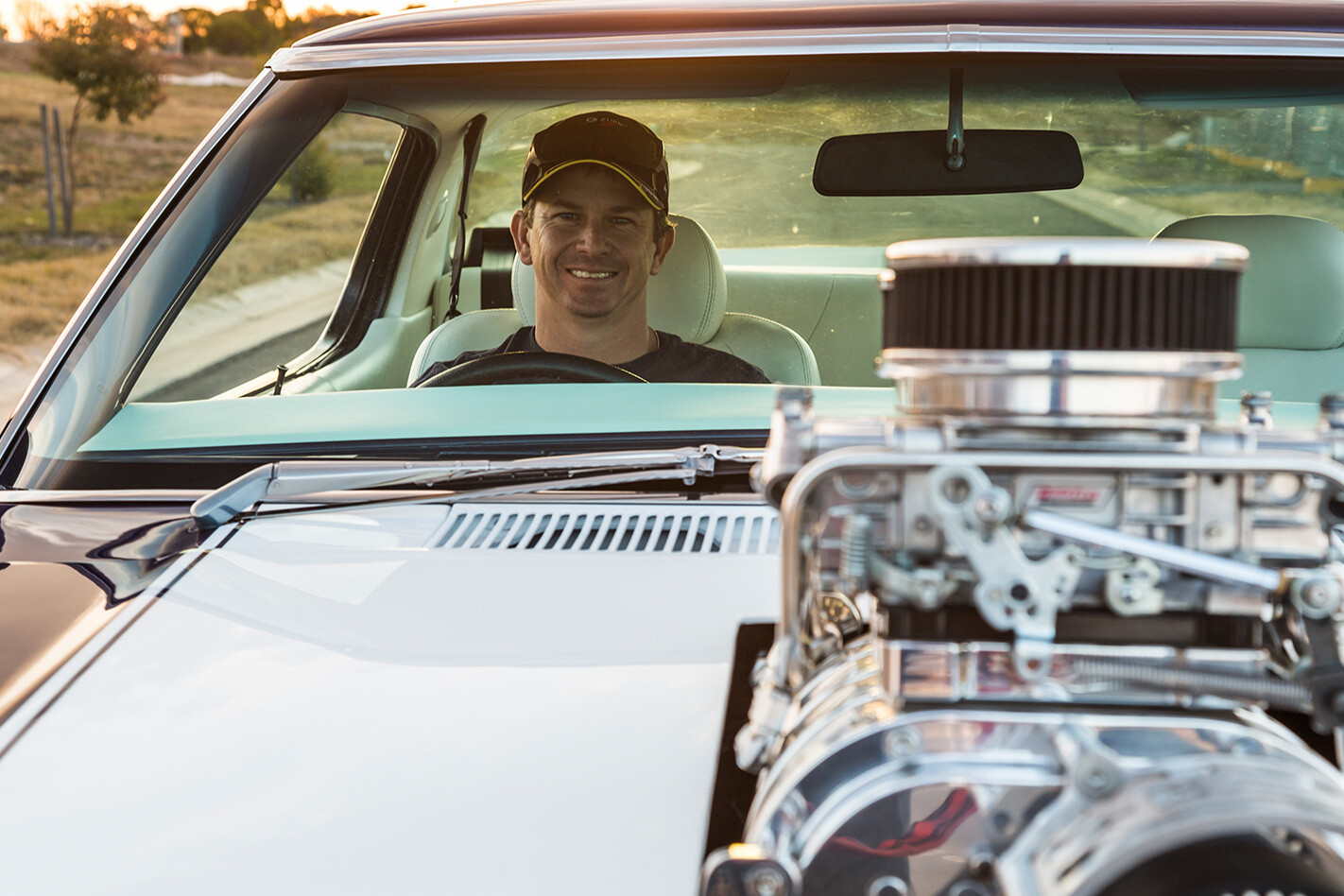