WHAT does it take to hit the Top 20 at Summernats? A meticulous build plan? An iron-clad strategy for gaining judging points? Or just the gradual realisation that your build has become something truly special? 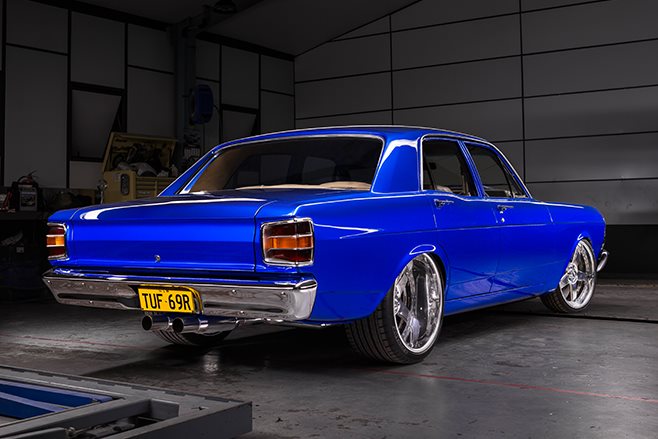 Mick Bellette’s journey to Top 20-dom took the latter path, paid tribute to his late brother along the way and scratched an itch for XW greatness that he’d harboured since his teens.

“When I was a kid, I had an XW Falcon; my old man told me not to touch it as it was too good, but I knew better,” Mick laughs. “I put bucket seats and a V8 in it, but then I had to sell it because I couldn’t afford to run it on first-year apprentice wages.” 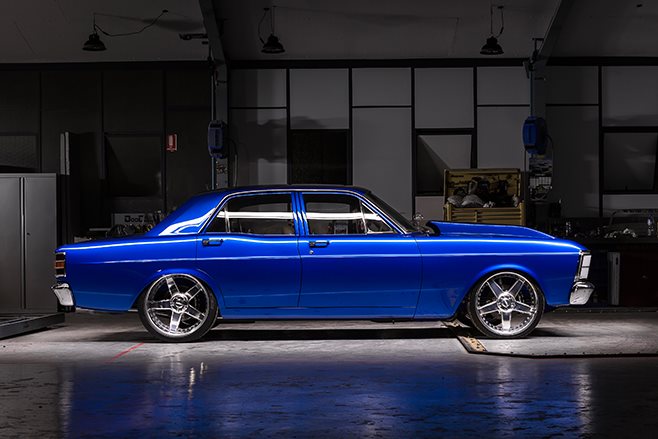 As Mick started his panel beating apprenticeship, his older brother Ray was close to becoming a fully qualified mechanic, honing the skills that together were going to make them a formidable team. “Ray came up with it – we were going to start ‘Belletty Motorsport’…” Mick trails off. 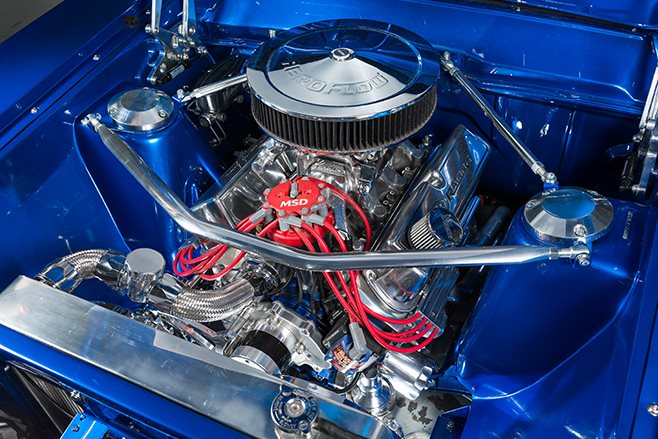 Mick spent well over three months on the engine bay, welding and smoothing the factory cracks and crannies. His modifications continue above the bay, with a reverse-cowl scoop fabricated from two XW Falcon bonnets and totally smoothed on the underside

The Bellette brothers’ business plan was not to be; in a split-second decision, Ray took his own life. “It was over a girl, something he would probably regret now,” Mick sighs with a solemn smile. “I never stop thinking about him.” 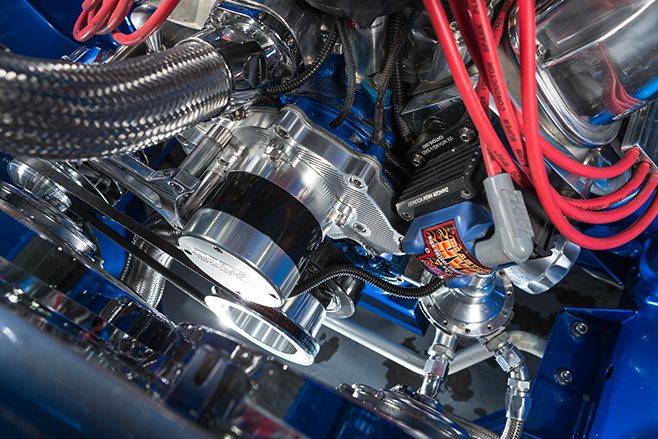 Mick and father Glenn rebuilt the 302 themselves; in went a Scat 347 stroker kit, lumpy Crower 272 cam, a pair of alloy Edelbrock 205 heads and a Parker inlet manifold topped by a Holley 750cfm Double Pumper carb. It’s all old-school stuff, but that doesn’t bother Mick

Fast-forward a decade: Mick is now established as a panel beater and ready to buy another XW Falcon. “I got it from Melbourne with a standard 302 Windsor and cruised it around like that for a bit,” he says. But naturally, the Belletty Motorsport gene took hold. 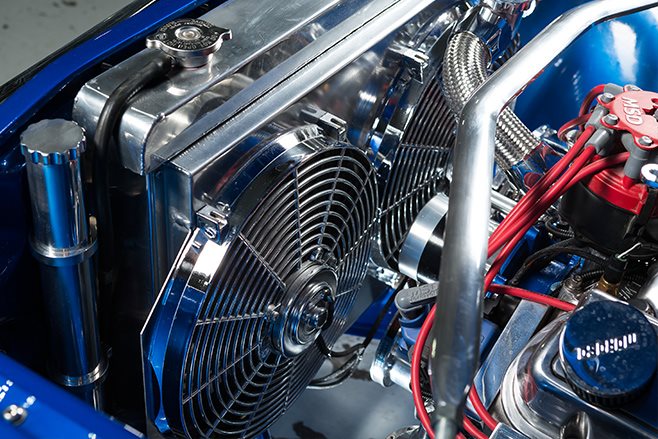 With the engine out, Mick’s honed eye noticed where he could make improvements. “I mean, have you ever looked at a standard Falcon’s engine bay?” he asks rhetorically. “There’s that many joins and seams and cracks and crannies; I ended up using a full bottle of gas just welding it all up.” 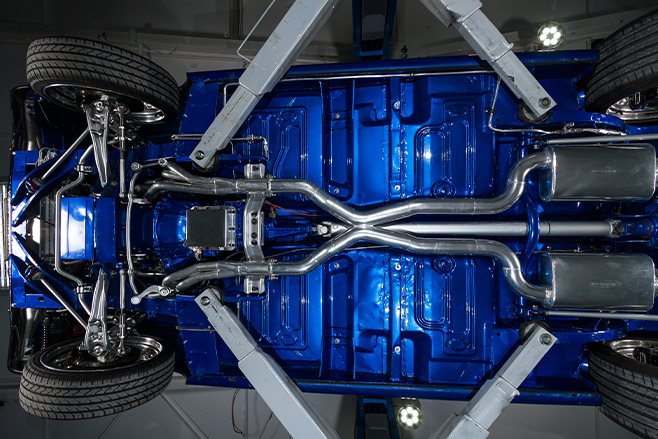 After discovering some rust, Mick realised he had to go the whole hog. “I’m a bloody panel beater, so I thought I’d better make it straight; like, proper straight,” he says. “I couldn’t tell you how much time I put into the bodywork; the car was already at work, so I’d knock off, then keep working on the Falcon until late.” 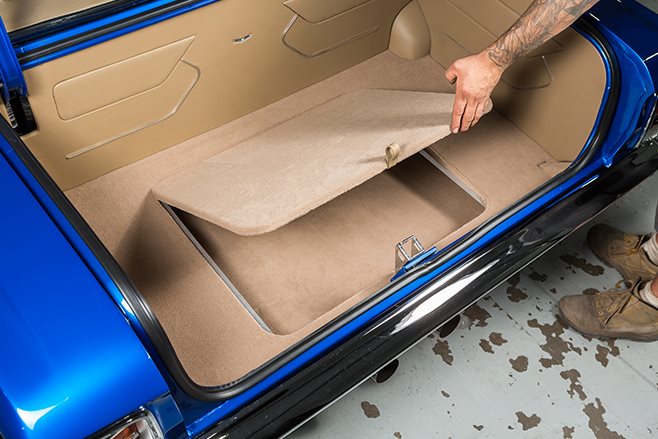 Mick spent two years sharpening up Broadmeadows’ toughest shape and getting the panel gaps millimetre-perfect before Andy Turkington attacked it with a few litres of House Of Kolor’s True Blue Pearl hue. 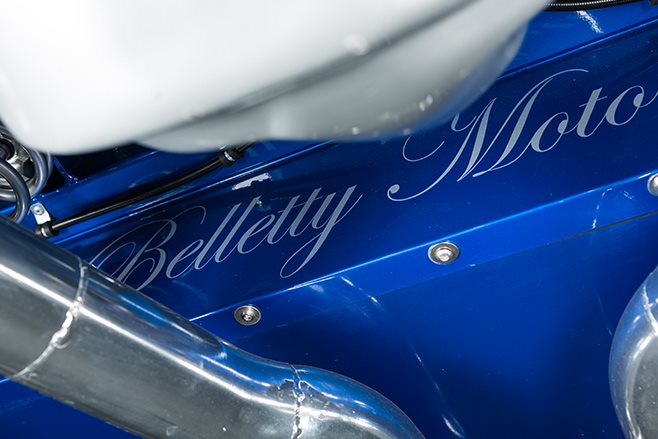 Since Ray’s passing, the boys in Mick’s crew have honoured his memory by sporting Belletty Motorsport stickers on their cars. Blue-ray steps that up with a secret homage under the custom rear floor. “Although no one’s going to see it, I know it’s there,” says Mick

As for the 302, Mick figured he had nothing to lose doing it himself alongside dad Glenn, a mechanic whose expertise is in truck and fourby transmissions. Together they pulled down the Mexican-block Windsor and rebuilt it better, faster and harder than before. 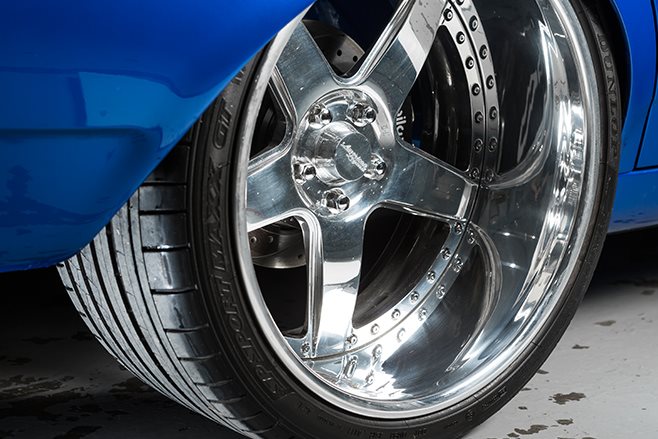 With the body, paint and engine coming together, Mick quickly realised the Falcon needed a wheel upgrade; the old 15-inch Center Lines were not going to cut it. “I ordered a set of American Legend rims; 20x7s up front and 11s down the back,” he says. “I knew they wouldn’t fit; when they arrived I cut the whole arse-end out of the car and started again, trying my best not to scratch it.” A wry grin works its way across Mick’s face. “And I got away with it!” 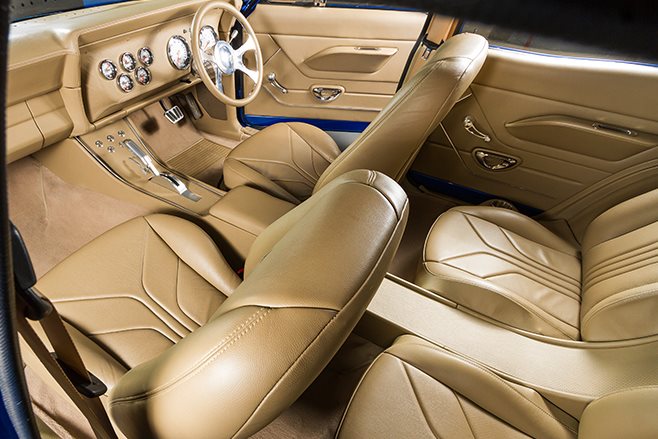 So where’s the handbrake? Like some modern cars, it’s electric, activated by one of the buttons on the centre console

Successfully fitting a set of tubs to a painted car is one thing, but hitting the Top 20 at Street Machine Summernats is something else altogether. And that ‘something else’ is the interior. Mick could have dialled up a repro Falcon GT interior and called it a day; in fact he originally considered doing a GT replica from the outset. “No offence to Falcon GTs and replicas, but if you’ve seen one, you’ve seen them all; it’s just the colour that changes,” he says. “Besides, this car was nothing – not a GS, not even a Fairmont, just a basic Falcon 500, so I decided to go completely custom.” 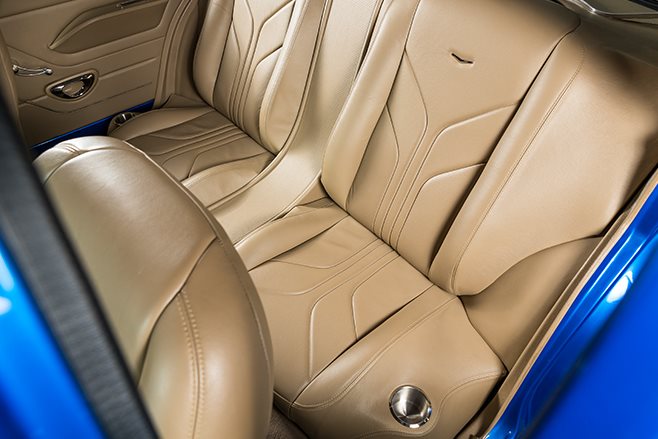 Front pews are BA Falcon, while the rear bench was dumped in favour of a pair of custom buckets, set inboard to clear the tubs and each with a custom spun-alloy cup holder

Matt Gilkes at Inside Rides came up with a slick, malt-coloured interior that thoroughly modernises Mick’s XW. The front seats are cut-down BA Falcon items, while the rear bench is, well, gone, replaced by a pair of custom buckets. Matt came up with the full-length centre console stretching from front to back, with the B&M Street Bandit shifter looking like it’s meant to be there. Mick himself adapted an electric handbrake and AU Fairlane door handles to step the interior up another notch, but they were just two things in a long line of hassles to crop up before Summernats. 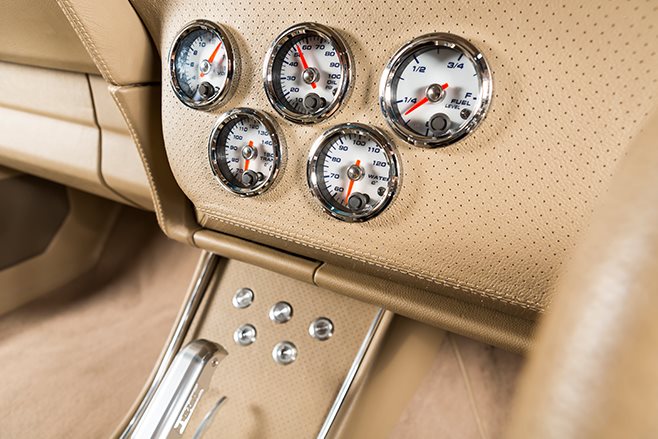 “Mate, everything that could go wrong, went wrong,” Mick laughs, shaking his head. “I bought a few things late, like the billet sump for the gearbox. When I went to install that, I snapped the filler off.” Mick started having doubts he would make it to Summernats, but drew on inspiration from his brother. Oh, and stubbornness. “I had mates saying that I couldn’t do it, so I told them I could.” He pauses for effect. “Then I made sure I did!” 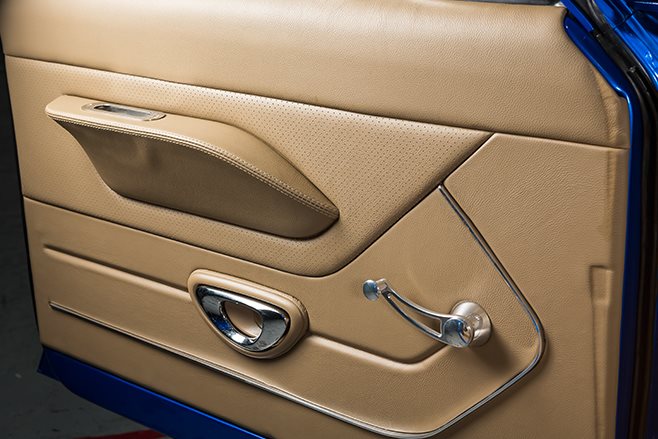 With two days left before bump-in, Mick hadn’t even turned the 302 over, so Paul ‘ProFlo’ Sant popped around – during his holidays no less – to get her up and running. 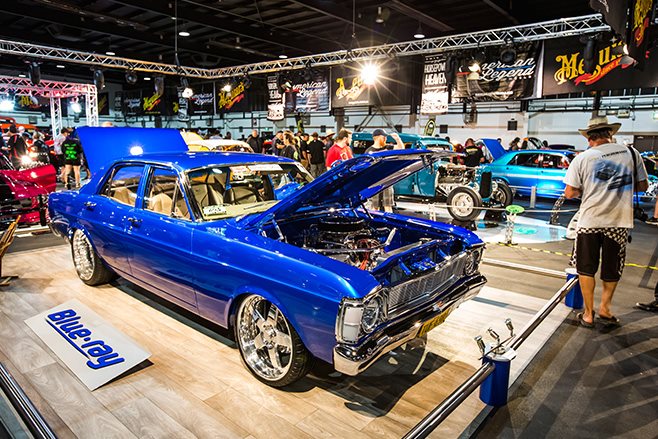 Mick built his car in dedication to his late brother Ray, debuting the finished product - dubbed Blue-ray - straight into the Elite Top 20 at Street Machine Summerants 30

“The day before we left, we cleaned it for the first time – me, my dad Glenn and my wife Kristy,” Mick says. But even as they gave the XW the once-over, things didn’t go to plan. “It was just pissing down rain. All we had was an open trailer. I don’t mind taking my cars out in the rain, but with the underneath the way that it is, I can’t be arsed cleaning it.” Whatever the case, they must have done a great job. “It didn’t even get off the trailer before they started judging it,” Mick says. 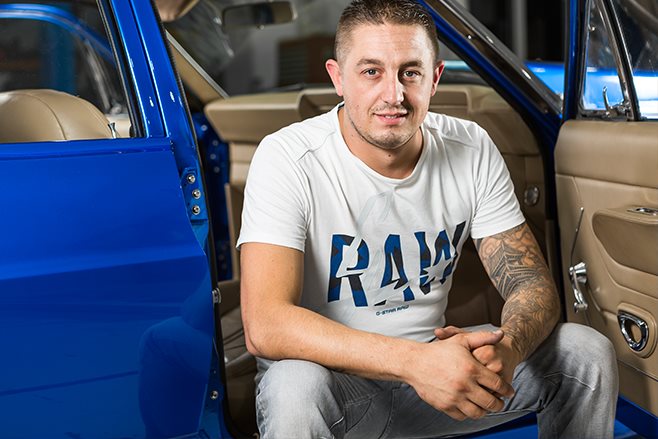 The result was not only a Top 20 finish, but a Top Sedan Elite trophy, and obviously this magazine feature. This car is the culmination of everything that Belletty Motorsport wanted to achieve, and is dedicated to Ray Bellette. “We call it ‘Blue-ray’ after my brother,” Mick says. “His memory runs through this car.”