I’VE HAD an epiphany. Jason Behan’s Valiant – dubbed MINTVAL – is the first Australian Mopar to score the full metal jacket for elite-level fabrication and finish. I thought surely among the elite-build Monaros, Falcons, Yankee muscle and even Cortinas that have dropped jaws around Oz, there would be a humble Wog Chariot that had been gutted and refabricated from raw stock. But there hasn’t been, at least not to my knowledge, and I’m a Mopar fan to boot. Danny Makdessi’s VC, Brent Murray’s Dart tribute, the X Customs Charger and our own Arby’s WAR440 have all taken Aussie Valiants to the next level, but were built with other challenges in mind.

The inspiration for Jason’s Valiant build was different to most. “I want a Valiant that is the four-wheeled version of my BMW HP4 motorcycle,” he says. “It has to have the perfect mix of braking, handling, and of course, looks and performance.”

The curves of the cabin metal roll on through to the boot via the tub work and the gorgeous fuel cell. The attention to detail is evident with the use of the same swage lines throughout the Val and overall balance of form with function

Now, I’m a motorcycle noob, but a quick Google of the HP4’s healthy specs was all it took to know I’d soon be a raw carcass if I rode one. However, I was suitably impressed by its looks, stance and attention to detail, and gained a better appreciation for Jason’s vision. As both a bike mechanic and diesel fitter, and owner of JB Tyre & Mechanical in Queensland’s Glasshouse Mountains, 30-year-old Jason knows his way around anything mechanical and loves performance. “I had a stock VF ute as a daily driver,” he says. “It was tidy but just didn’t cut it in the go department. I’d wanted a VG hardtop since I was a young tacker, so decided it was time to step things up.” He’d heard great things about Chris Wells from BMV Engineering on the Sunshine Coast, and was suitably impressed with their craftsmanship. Jason, Chris and the BMV crew hatched a plan to create his ultimate hardtop. 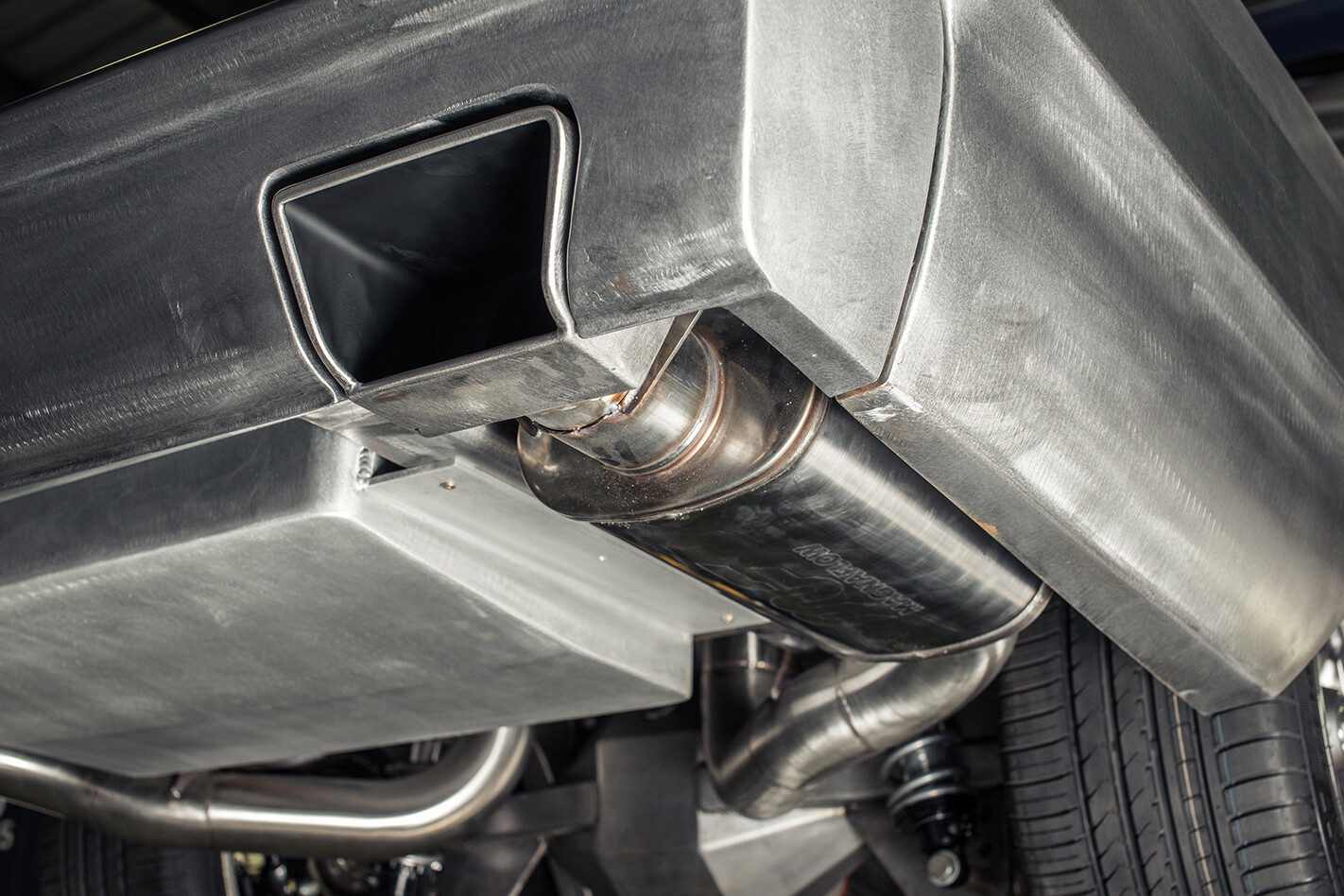 “Everything I own has to be streetable, so registration and useability were a must,” Jason says. “I wanted a Valiant I can use at track days and cut a decent number down the quarter, but could Sunday-cruise to a show or the beach with my wife Kellie.”

Seven hidden lengths of 40mm tubing traverse the floorpan between the firewall and rear bumper, acting as channels for all electrical wiring, brake and fuel lines

Chris was certainly sympathetic to Jason’s vision. “We have the same philosophy when it comes to our projects,” he says. “We planned the build from start to finish before the donor even arrived, and can proudly say we haven’t needed to deviate from that plan. Clint Harry from Harry’s Performance Engineering works closely with us for registration compliance and is a no-nonsense operator who deals in ‘yes’ or ‘no’ terms; there’s no grey area. If you want it legal, you just do what he says.” Jason sourced a sad VG and work began in earnest. “It was a total shitbox,” Chris says. “I told him not to bother finding a good one and he listened too literally; I saw it on the trailer and said: ‘What the hell is this?’” 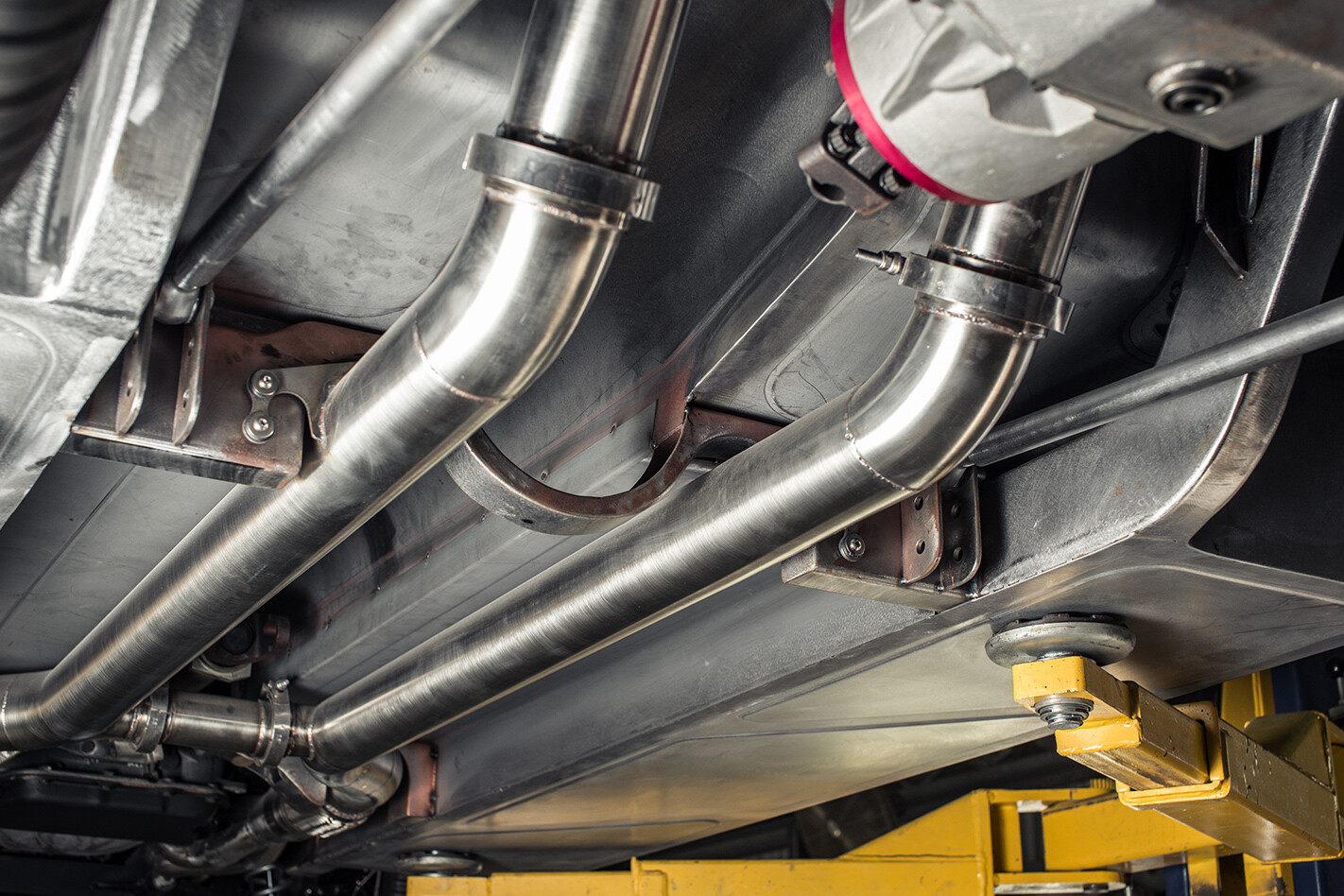 The first step was to remove the entire floorpan and begin fabrication on a completely new undercarriage. Asa coach and motor body builder by trade, Chris is a metal-shaping maestro (he had a hand in the wild Willys Jeep wagon build, SM July '16), and BMV employee Craig Walters is both a machinist and a design and engineering guru. The pair combined skillsets to form 100x50 RHS into new rails, sheeted with fresh pans and permanently attached to the hardtop shell to retain monocoque construction. This, combined with a heavily reinforced custom firewall and engine bay tie-tubes, makes for four times the rigidity of a stock shell. An aftermarket front end uses double wishbones in lieu of the standard torsion bars and was redesigned by BMV to better suit Jason’s application. The four-link rear is more of BMV’s handiwork, with both ends of the car suspended by adjustable QA1 coil-overs. A proper collapsible steering column and power rack-and-pinion set-up is a modern upgrade to complement the new suspension componentry. A complete Wilwood disc-brake package has been used front and rear, activated by a Wilwood master and pedal assembly assisted by a CVR electric vacuum pump and hidden VH44 booster. The 3D-printed brake cooling ducts that pull gobs of cold air from the front pan aren’t just for show – they’re designed to not only keep track-day brake temps in check, but pull heat away from the engine bay and exhaust surfaces.

The full sheet-steel interior deviates from the sharp-edged exterior styling by using curves to add a comfort element. Upholstered survaces will be kept to a minimum, and the use of exposed fixings and flat paint finishes will add to the pro tourer aesthetics

“Everything with this car has a purpose,” Chris explains. “Any project we tackle has to drive and drive properly, while being conscious of a customer’s budget, which is why we invest the time early on to ensure there are no blow-outs, afterthoughts or half-measures with a build.”

The removable floor panels enable quick access to the electrical components and other ancillaries. A double-skin floorpan has been used for neatness, with insulation on both inner surfaces for an extra dose of noise and heat reduction

The sharp and swoopy hardtop body shape is still easily identifiable, and the extensive rust repairs were just the catalyst Chris needed to refine the factory styling. The changes are far too numerous to mention them all, but include the deletion of all seams and the proper gapping of all hanging panels. The front and rear screen openings were modified to accept flush-fitting glass, while the eyebrow moulds and bonnet trim have been removed, with the peaks of both the bonnet and front guards extended to accentuate the grille opening. The grille itself is a laser-cut three-piece alloy item, created by BMV and firmly stamping the identity of MINTVAL. Three-section 1968 Dodge Dart tail-lamps relocate the indicators away from the factory rear bumper, and the latter has been redesigned for a smooth appearance and snug fit. The interior features a fabricated full-length console and dash housing with a CNC-machined fascia supporting Auto Meter gauges. The bead lines used throughout the undercarriage extend topside into the boot and interior, while a number of exposed fixings will remain to continue the pro touring theme.

A 514-cube big-block Chrysler donk sits four inches rearwards over stock and uses a four-bolt Hemi block topped with conventional-chamber Indy 440 alloy heads and intake. The motor pumped out 650hp on the engine dyno, but will score a cam change to unlock more grunt

The grunt factor hasn’t been lost in the details though, and Jason’s plans called on something healthier than the trusty old 318 Fireball. A turn-key 514-cube Chrysler big-block came along at the right price and was quickly snapped up early in the build. The Mopar Hemi block uses splayed four-bolt caps to retain a 4.15-inch Eagle stroker crank connected to Scat rods and PULP 98-friendly forged flat-top pistons. The current solid cam helped push the engine to a dyno-proven 650hp, but will be replaced with a Dennis Paul-spec hydraulic-roller to unleash the motor’s full potential. Non-Hemi Indy 440-1 alloy heads and an Indy single-plane intake are delivered the correct fuel/air mix from a 1050 Dominator carb.

A fabricated nine-inch features Strange internals and 35-spline axles to adequately support the potent engine combo, located via a BMV-designed four-link assembly and QA1 coil-overs - and look, no airbags! The VG's suspension is adjustable between 110mm and 160mm ride heights

An alloy radiator is backed by a BMV shroud with in-built fan, and an MSD ignition will provide the necessary spark. The grunt will be delivered to the rear wheels via a 727 Torqueflite transmission with a reverse-pattern manual valvebody and 4500 stall, with gears selected by a B&M Stealth Pro-Ratchet shifter. A fabricated nine-inch housing features Strange internals with 3.25 gears, with full-floating hubs and 35-spline axles chosen for legality and maximum strength. With 12 months’ build time already logged and another 12 projected to see the car finished, BMV’s work is nearly complete. “We don’t claim to be a one-stop shop by any means,” Chris says. “We focus on design and metal fabrication, so the paint, interior and electrical work will be outsourced to specialists in those fields.” 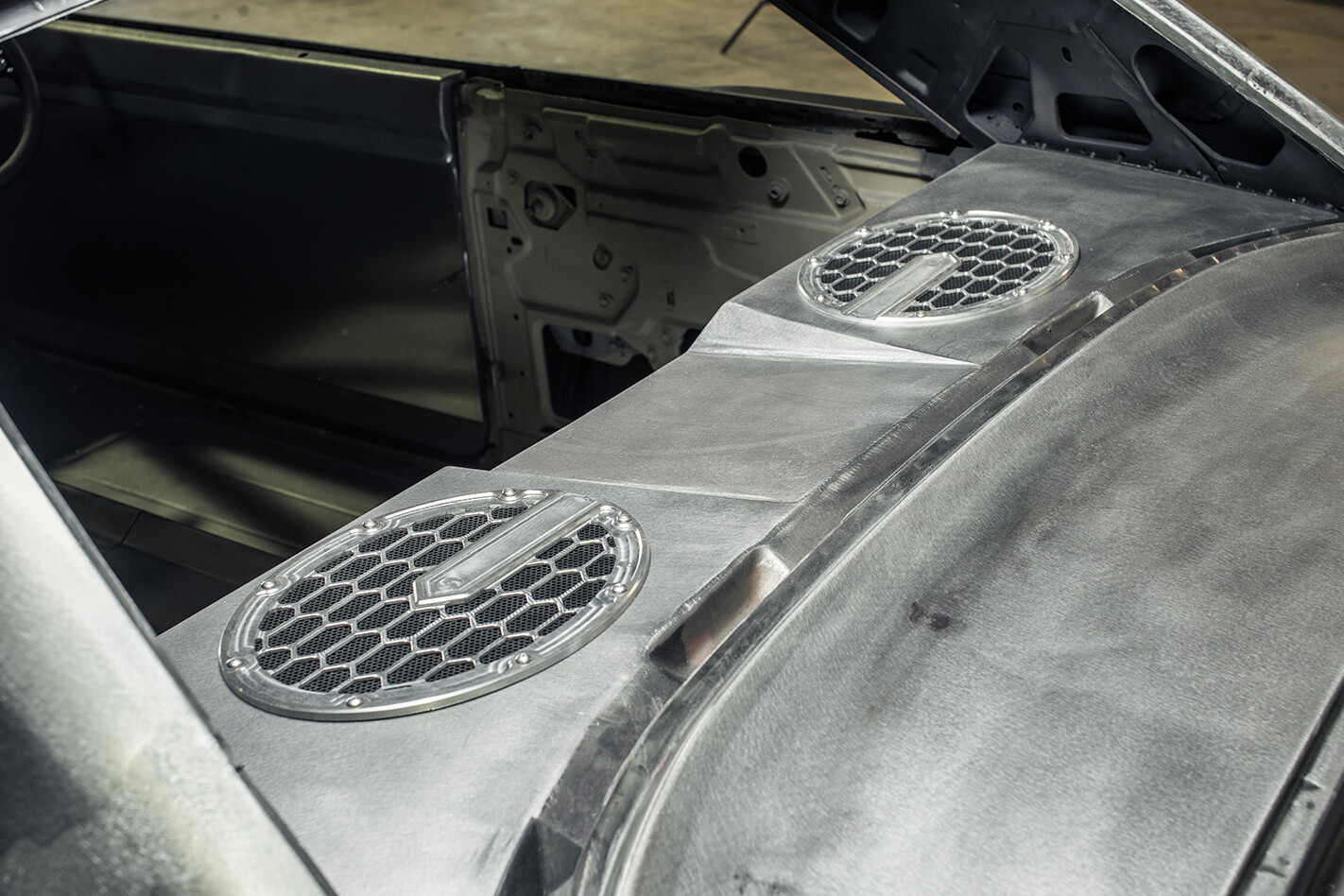 Needless to say, it’s big-decision time for Jason and wife Kellie, who need to lock down the final colour and trim choices. “We have the basic concept and surface textures sorted, which is half the battle,” Jason says. “I’ve never lost sight of my HP4 motorcycle vision, so am sure to spend a few more hours staring at both to get it just right.”