Looking back on the colourful history of 'Saggy Sarah', an ex-HDT XU-1 Torana with Bathurst and ARC pedigree

Looking back on the colourful history of 'Saggy Sarah', an ex-HDT XU-1 Torana with Bathurst and ARC pedigree

THERE’S this Pom, Jeremy Clarkson, who has a popular television show. He claims he went to a flash school but he must have snoozed through geography because he always confuses Australia with Austria and never fails to say rude things about us. Another of this man’s pet hates is people who name their cars. Well maybe he should meet Saggy Sarah. 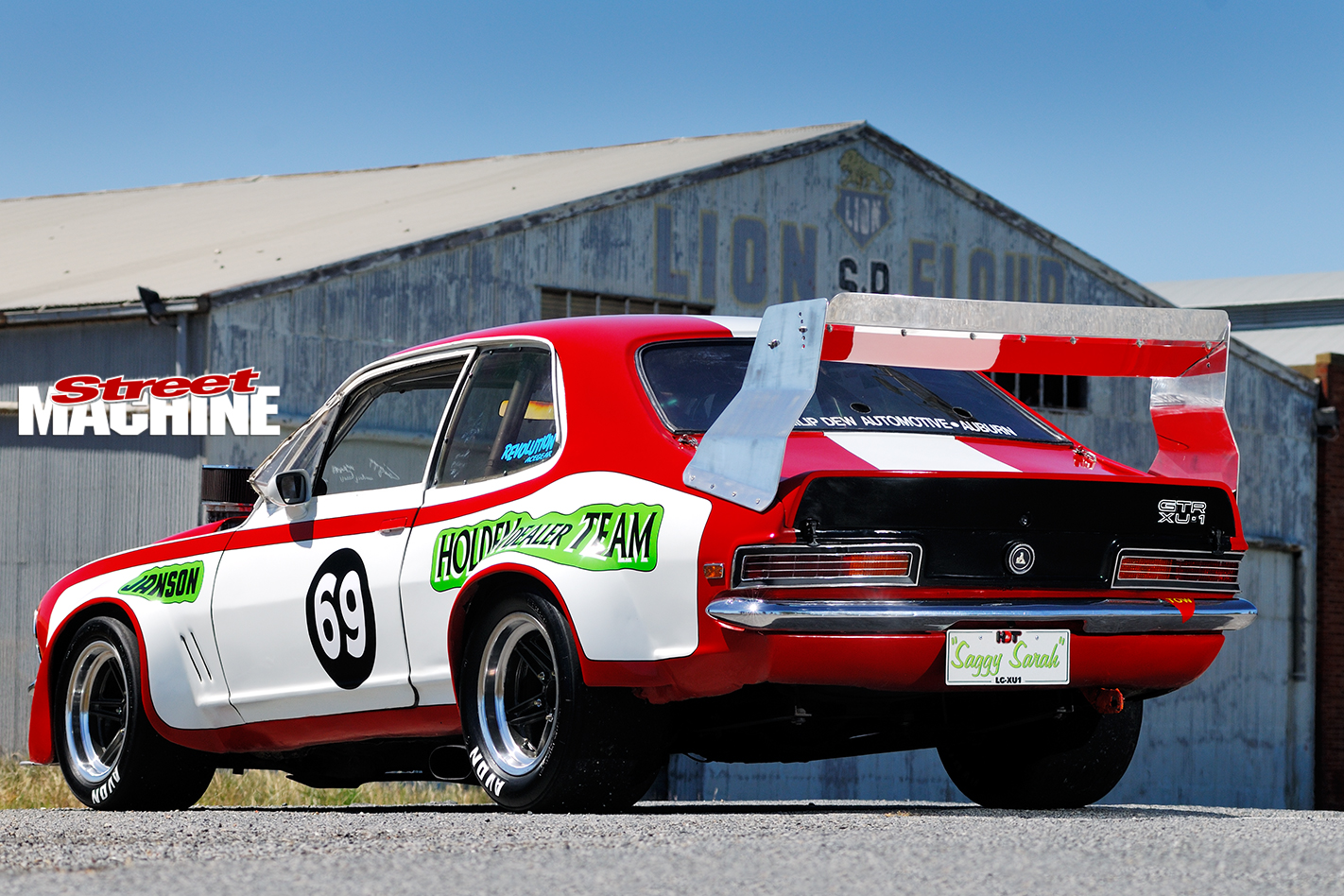 “Sarah came down the Holden line in 1970 at a time when just about every XU-1 was being snapped up for racing,” a bearded Larry Kavanagh enthuses.

“She was the 10th XU-1 built and went to Harry Firth and the Holden Dealer Team, where she was painted in HDT colours for Colin Bond to fire her in anger at the Sandown 250 lead-up to Bathurst. She was actually out front in the 1970 Great Race, just for one lap, but that was one lap where Sarah was beating Moffatt.” 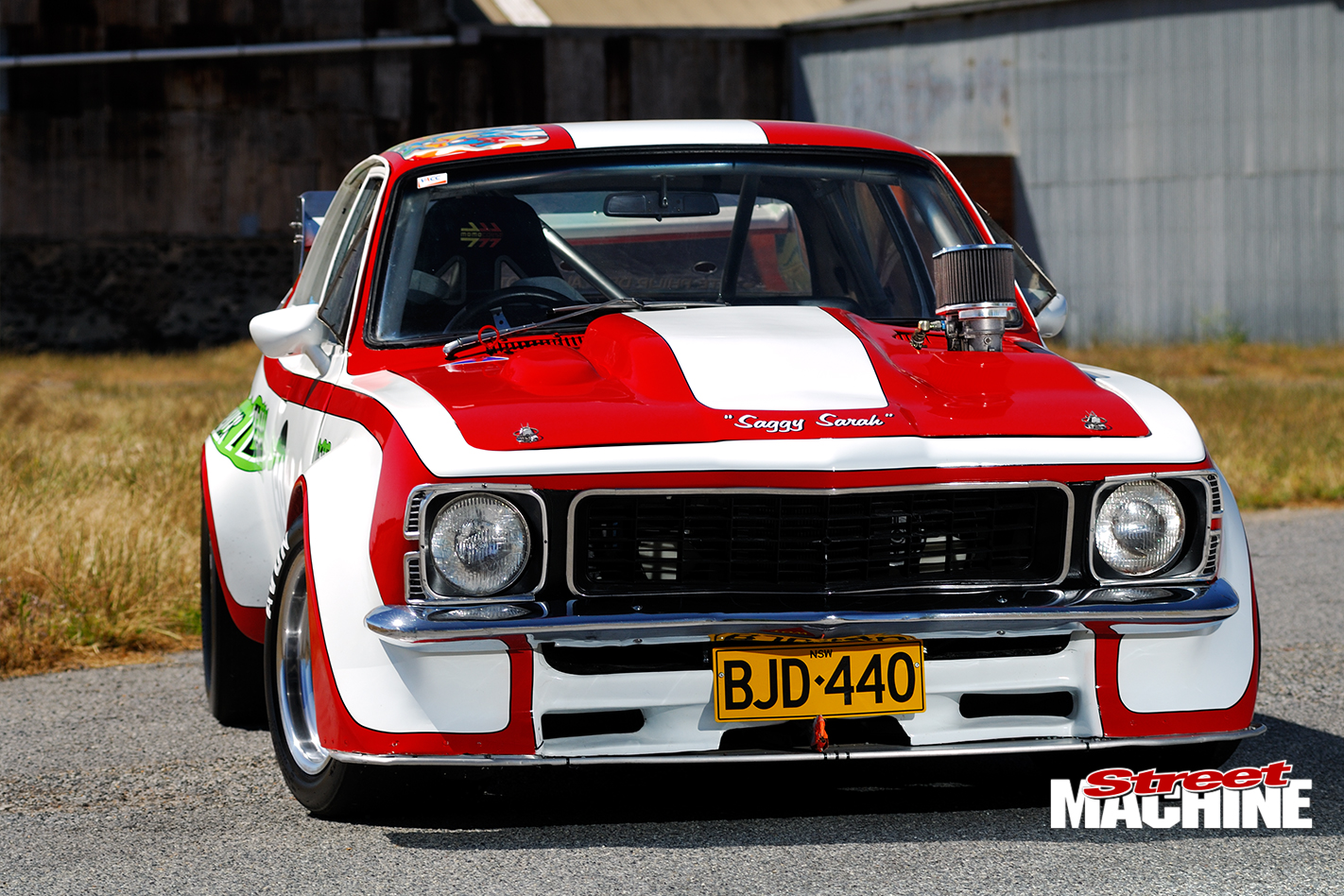 The energy and enthusiasm radiating off Larry as he machinegunned these facts was tangible and he didn’t stop there.

“Some years ago I decided to buy a classic Australian muscle car and found an XW GT but I hesitated and it sold. I was unhappy about that and thought I’d lost the deal of my life, when a mate of a mate related one of those ‘Yeah, right!’ urban myths. He said he knew of a rare race car dumped in a barn. I made the call, not expecting a result but the owner said it was all for real. I made an appointment to see the car three hours later. 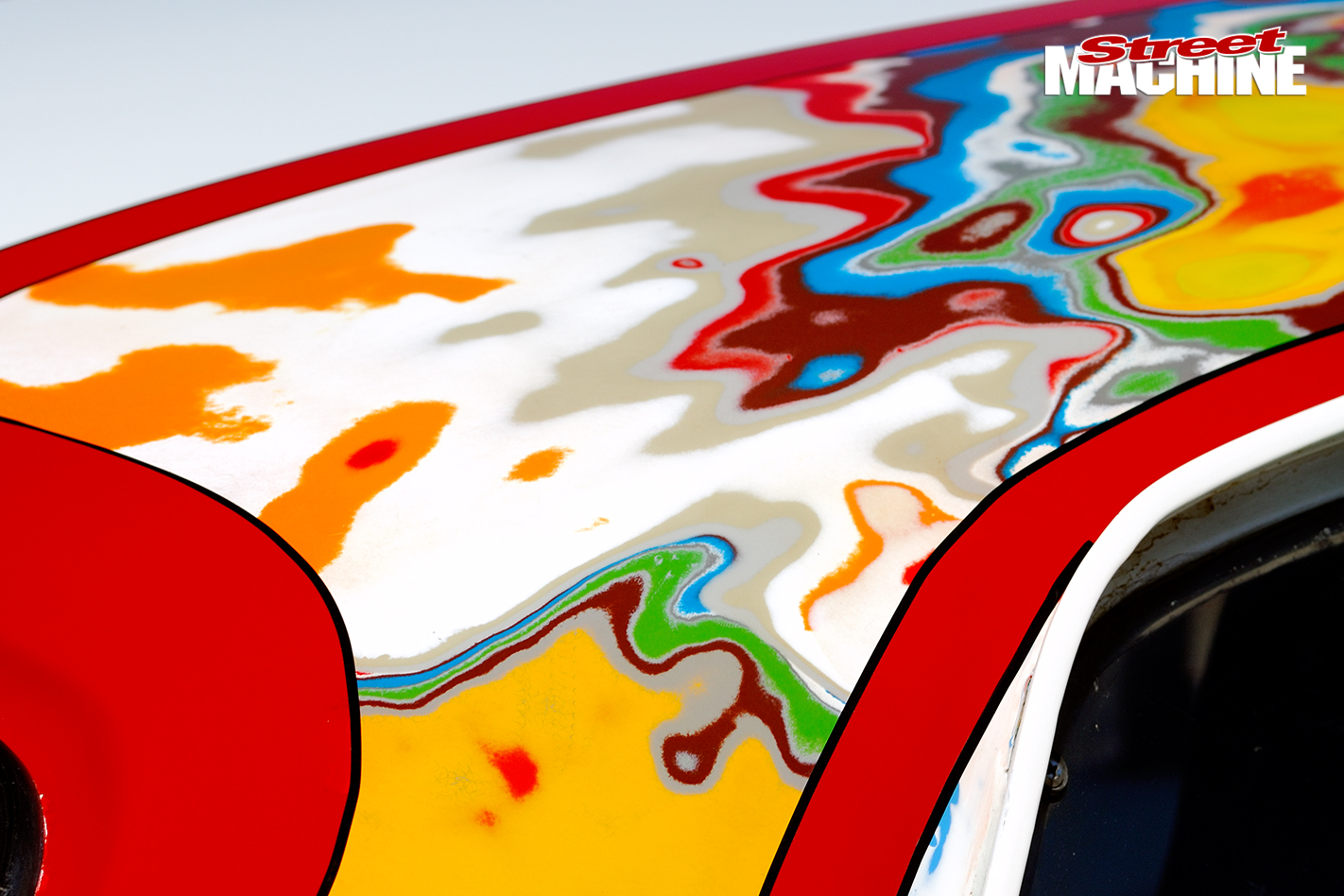 Painted by Larry in its 1983 livery, Sarah's body preparation revealed many layers of paint underneath which were preserved and clear-coated across the roof and C-pillars.

“When I saw the LC I thought the trip had been wasted; it was in a bad way. Then the owner handed me the log book and a whole heap of other documentation that outlined the Torana’s heritage. I think my hands started shaking at that point.” 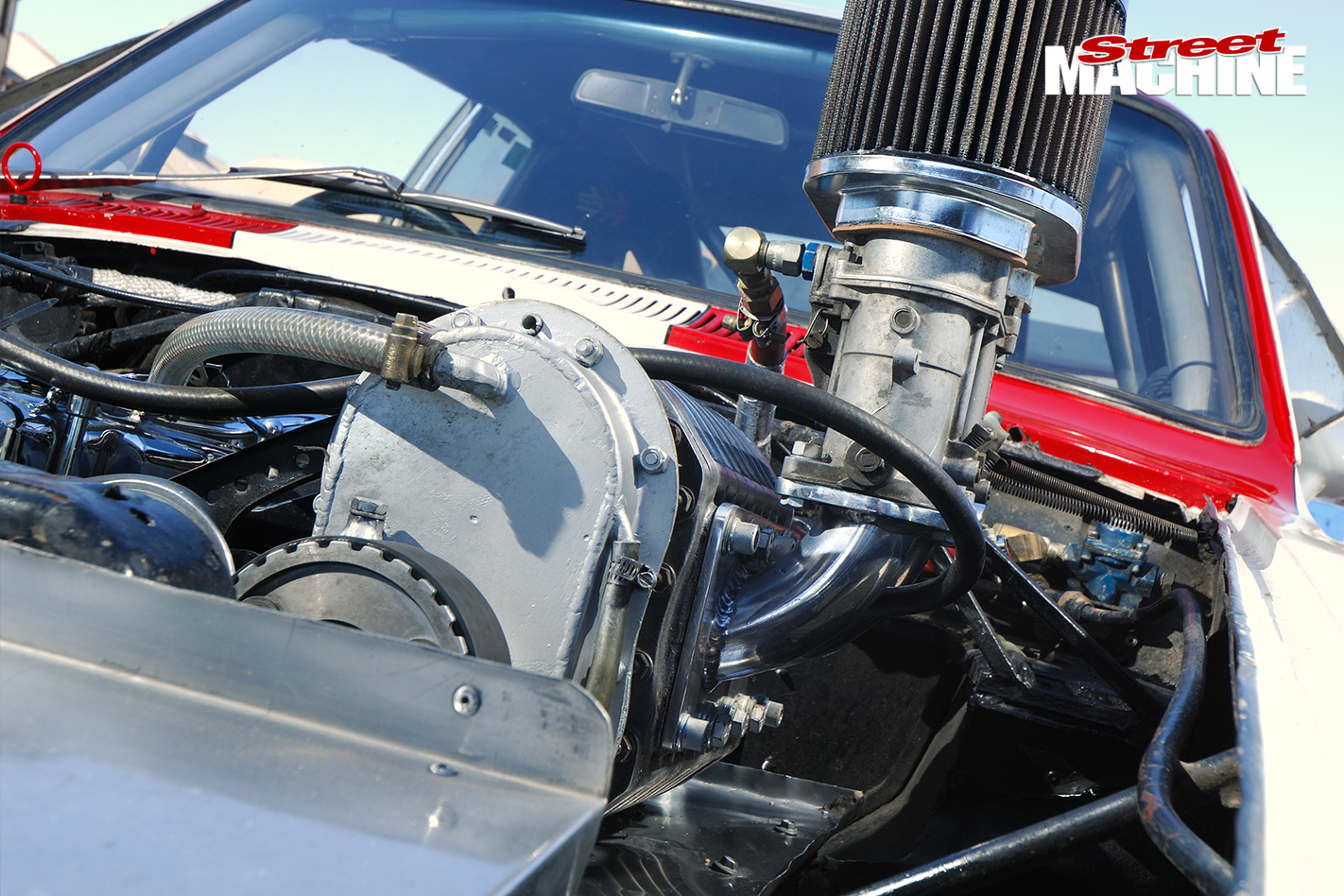 That paperwork showed she’d rallied in Noumea, crashed out of the opening round of the ARC in 1971, was filmed for a '71doco about motor racing as well as a Castrol advert, was featured in the 1974 Giant Killers mag and was once owned by Captain Peter Janson, who used the car in both rally and rallycross events. As if that wasn’t enough, there was a letter authenticating parts of the car written by the King of the Mountain himself.

“It came over the radio shortly after I bought Sarah that Peter Brock had died. When I saw the time of Brocky’s accident I realised it’d occurred while I’d been making the appointment to see the car.

“That’s when it hit me that I was meant to miss out on that XW, to find the LC and be its custodian. Hell, I still can’t talk about this without my neck tingling.”

As he spoke, Larry turned away, clearly needing a moment and not wanting me to see his emotion. A vehicle with this much history and connections to so many special people is no longer simply a car; it’s more of a benevolent Christine that insinuates its way into your heart. 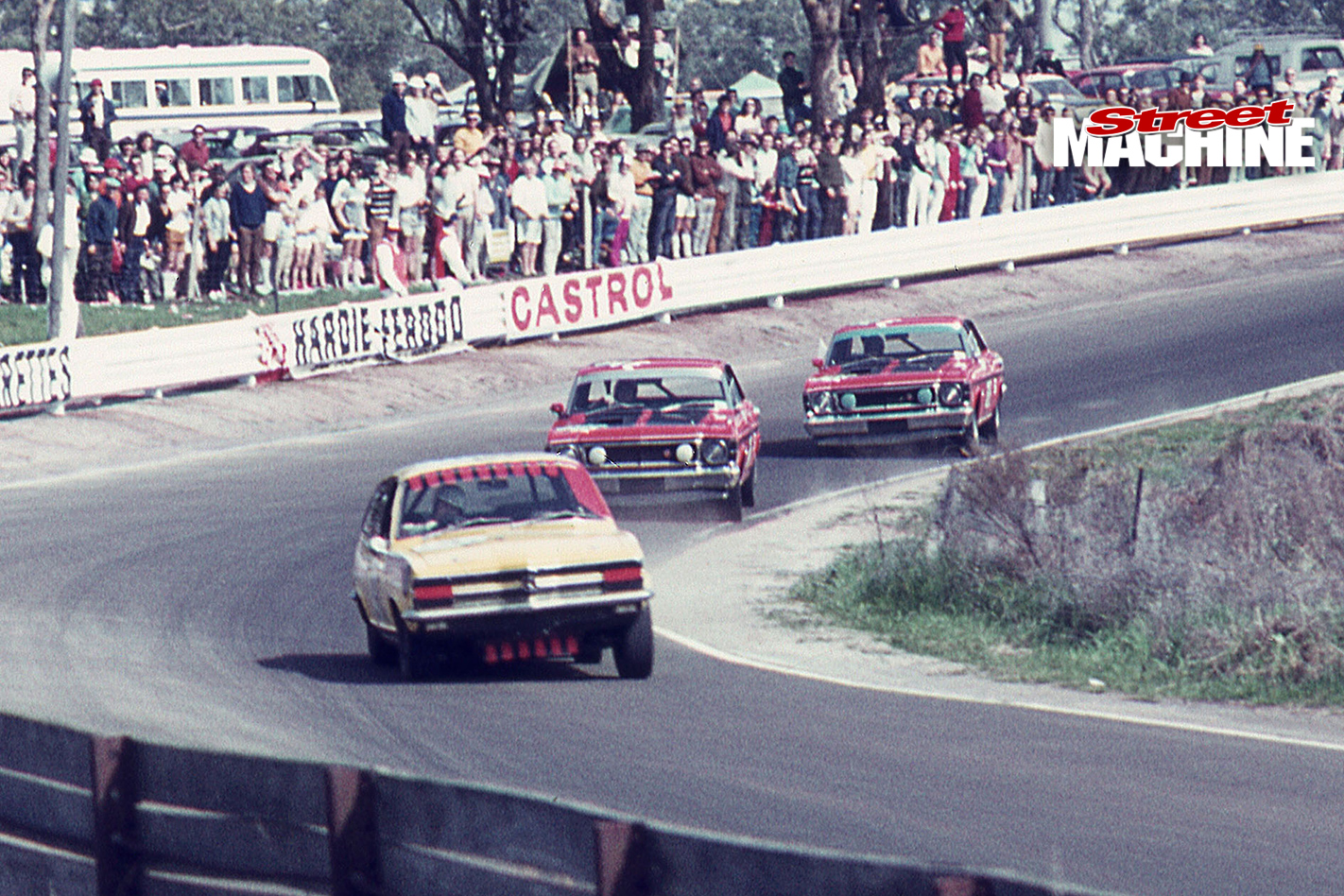 “I’ve spoken to Harry Firth, Colin Bond, Peter Janson and countless others about this car and its history. It’s a genuine HDT XU-1 that has raced at Mount Panorama and could be stripped, restored and returned to its 1970 Bathurst livery but that would be criminal. The log book shows she’s been raced and rallied for in excess of 80,000 miles over a period of 40 years. It would be wrong to return it to a condition in which it competed for a mere four months. Instead, I’ve retained all the developments that evolved over those four decades; the 186 went for a 202, there have been a couple of blowers, plus late-model discs all ’round, stuff like that.

The supercharger is a Godfrey K300, which originally saw duty pressurising the cabin on a Fokker Friendship aircraft. It was fitted by Bruce Watt, who campaigned Sarah in Sport Sedan from 1977-’83. The blower is fed by a 48IDA Weber and they are mounted on a tube manifold fabricated by HDT’s Ian Tate for The Beast —Brock’s all-conquering rallycross weapon. 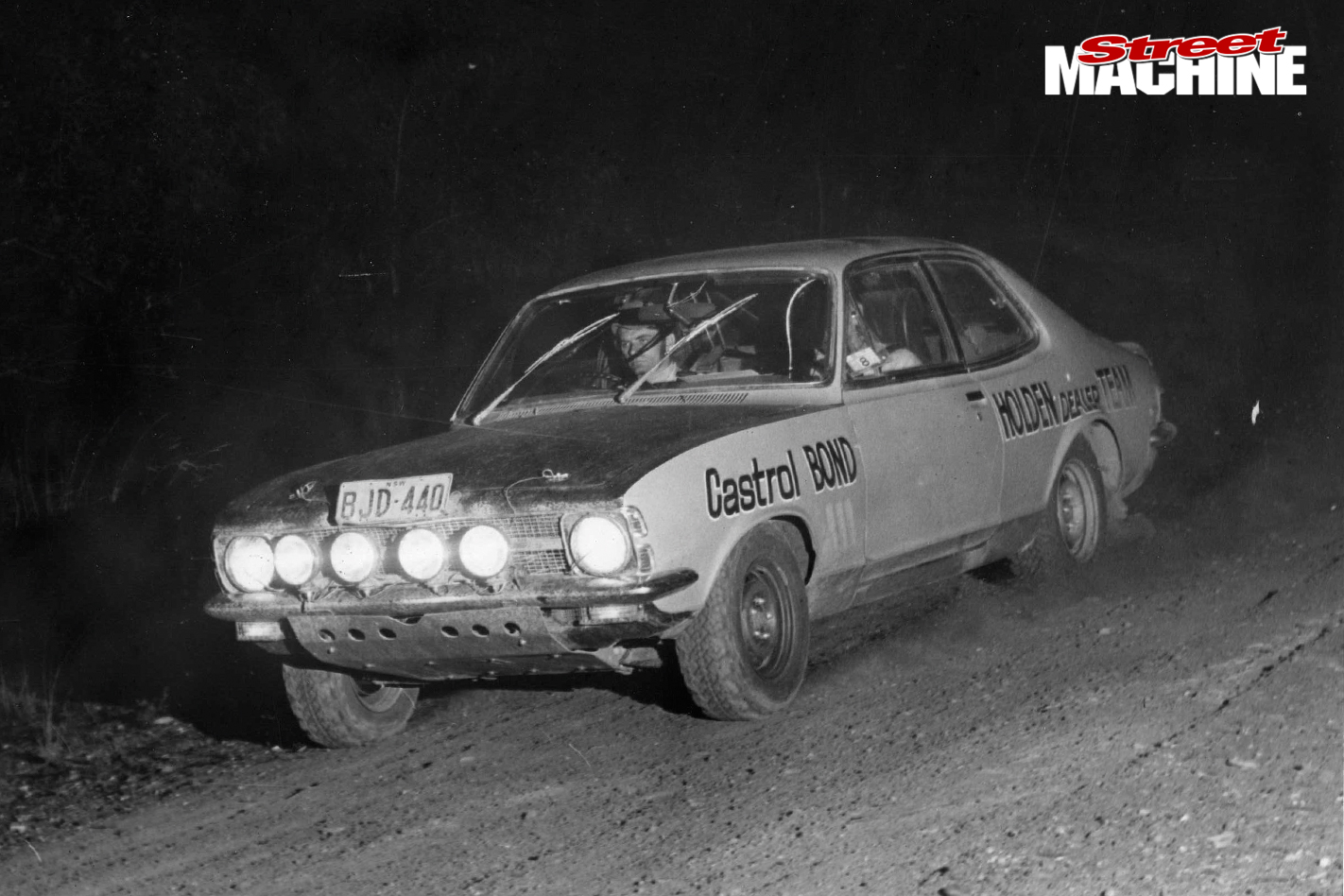 “It’s my intention to ensure old BJD 440 [its rego since 1971] continues to do what it was built for — compete. I took her to the Winton Festival of Speed in 2010 and I’d never raced before. In my first attempt I came third in a field of 17 that included some Porsches. Peter Janson said my result was impressive but I said there were a few people in the car with me for that race and it sure wasn’t me driving.”

Many of Sarah’s parts have been autographed by those who knew her. As well as Firth, Bond and Janson, they include HDT head mechanic Ian Tate, HDT Motor Sport Manager Joe Felice, rally driver Barry Ferguson, Bond’s navigator George Shepherd, HDT mechanic Frank Lowndes (Craig’s dad) and HDT panel and paint guy John Dickson. He walked up to Larry at Phillip Island and said: “I know this car — it was one of the Dealer Team touring cars we converted to a rally car. Now how did it get all of those parts from The Beast?" 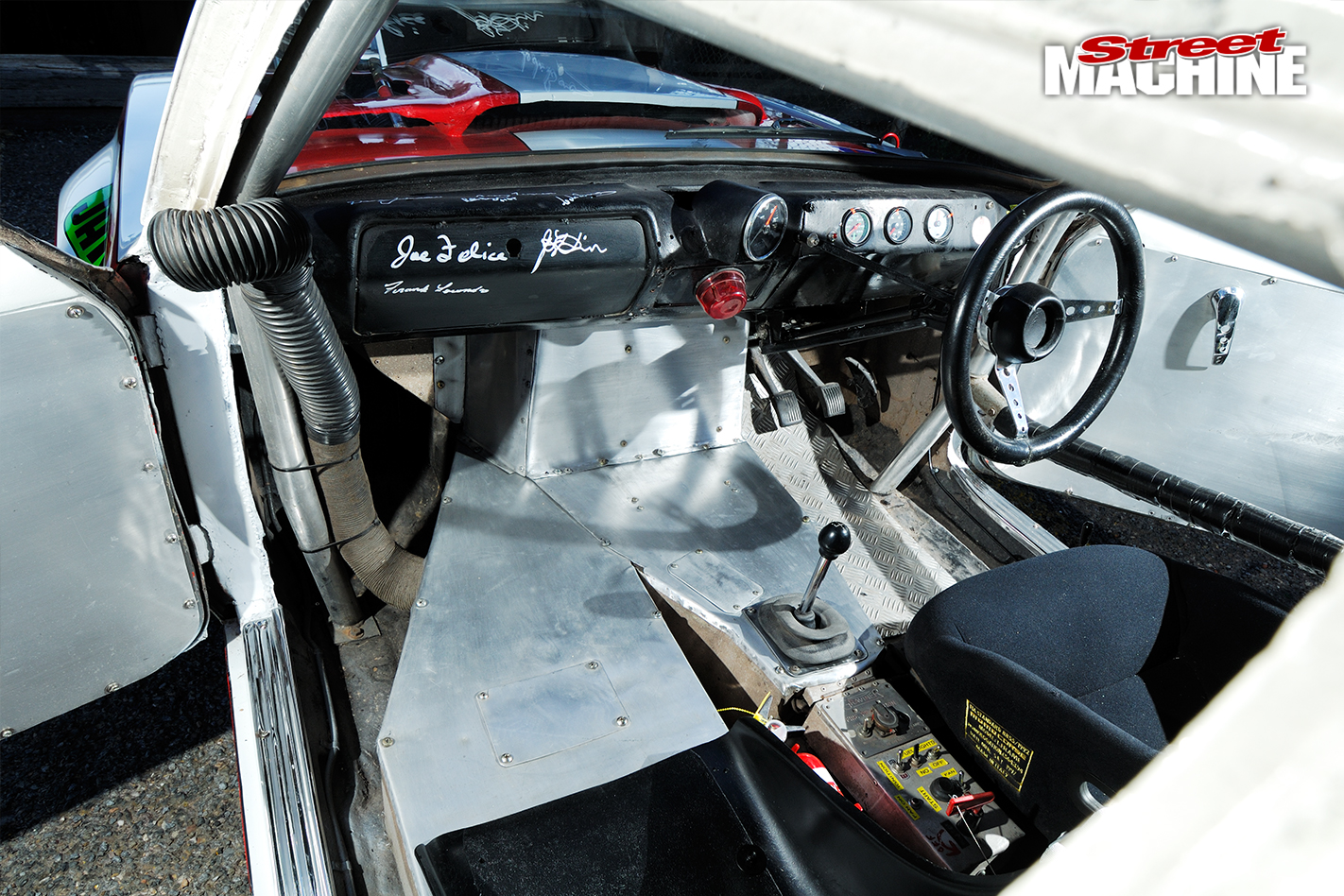 As to that TV bloke who says you mustn’t name cars, he was 12 when Janson bought this used and abused ex-racer in ’72 and discovered the HDT boys affectionately referred to her as ‘Sarah’.

Who Sarah was is lost in the mists of racing history but after many adventures across a spectrum of motorsports, the Captain decided she was ‘Saggy Sarah’. Regardless, she raced on, attacking hill climbs and Scandinavian flicking around muddy forest tracks, bringing joy to owners, drivers, navigators and spectators alike. Today, somewhat punch-drunk from 40 years of slugging it out with younger competition, Sarah still takes on all comers. 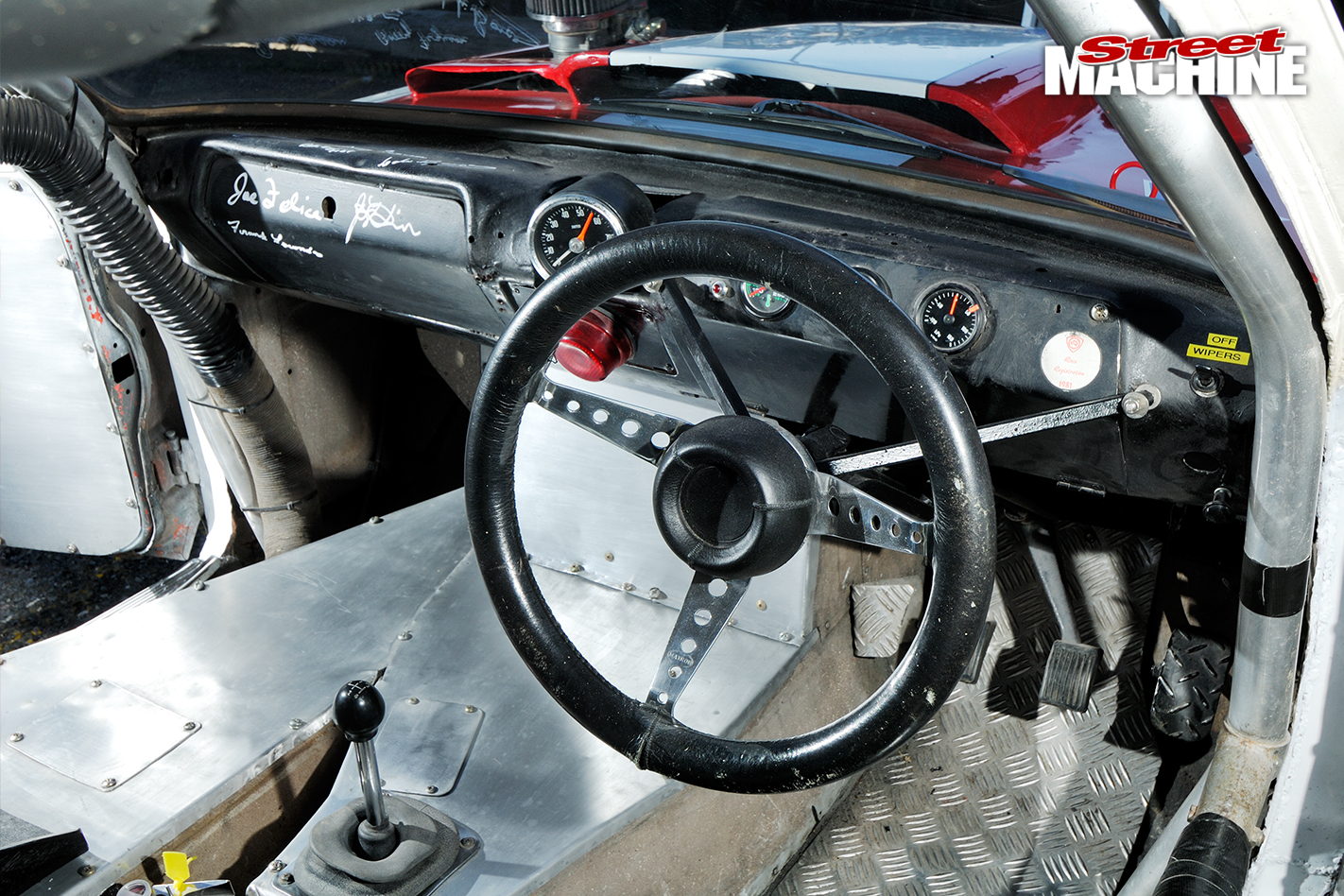 So Jeremy, in light of the patina, engrained with so many legendary names from Aussie motor sport, be careful suggesting Sarah is a lifeless steel automobile, else one night you might find the gaudy gal power-sliding through your lounge room wall.