EVERY car enthusiast dreams of purchasing a classic muscle car from the great age of vehicle manufacture, and salivates at the possibility of their ‘barn find’ turning out to be something more – perhaps a famous event winner with a unique factory connection. Yeah, we can all dream.

Well, that dream came true for Perth-based businessman Mark Negri, and it happened quite by accident. As a youth he’d noted a local occasionally cruising the streets near his home in a seemingly well-preserved XW GTHO Falcon, and about 15 years ago he was able to round up the $18,000 necessary to buy the car.

He owned that Falcon for a few years, then sold it, regretted it, and bought it back. He drove it rarely, but he and his friends had often pondered its origins. The guy he’d bought it from had been told that the car had a motor racing background, and had done some research to try and find out more, without luck. Mark likewise attempted to trace the car’s background, and while he was able to come up with a few basic facts, such as when it was first registered and its rego number, he knew nothing more. Then one night in 2005 his good mate Robin Chalwell phoned. He’d been reading a magazine article about a 1960s and 70s Melbourne drag racer named Larry Ormsby.

In the article there was a photo of one of the Falcons Ormsby had raced, and there appeared to be alterations to the rear-quarter dog leg – the same as on the car in Mark’s garage. When he read out the rego number – KJE 563 – it matched the number Mark’s research had uncovered. It appeared Mark owned one of the most significant sedans in the history of Australian drag racing.

Now he had the bones of the vehicle’s background, Mark’s research began in earnest, and eventually he uncovered his car’s amazing story.

The XW had been purchased brand new in 1969 by Ormsby, who was to become one of the most determined racers of the late 1960s. In early 1968 he’d known nothing of drag racing and was devoted to building up his chain of Brake Service Company stores and its fleet of mobile repair vehicles. When motor racer Norm Beechey opened a caryard next to Ormsby’s Coburg headquarters, he began to meet a string of drag racers. 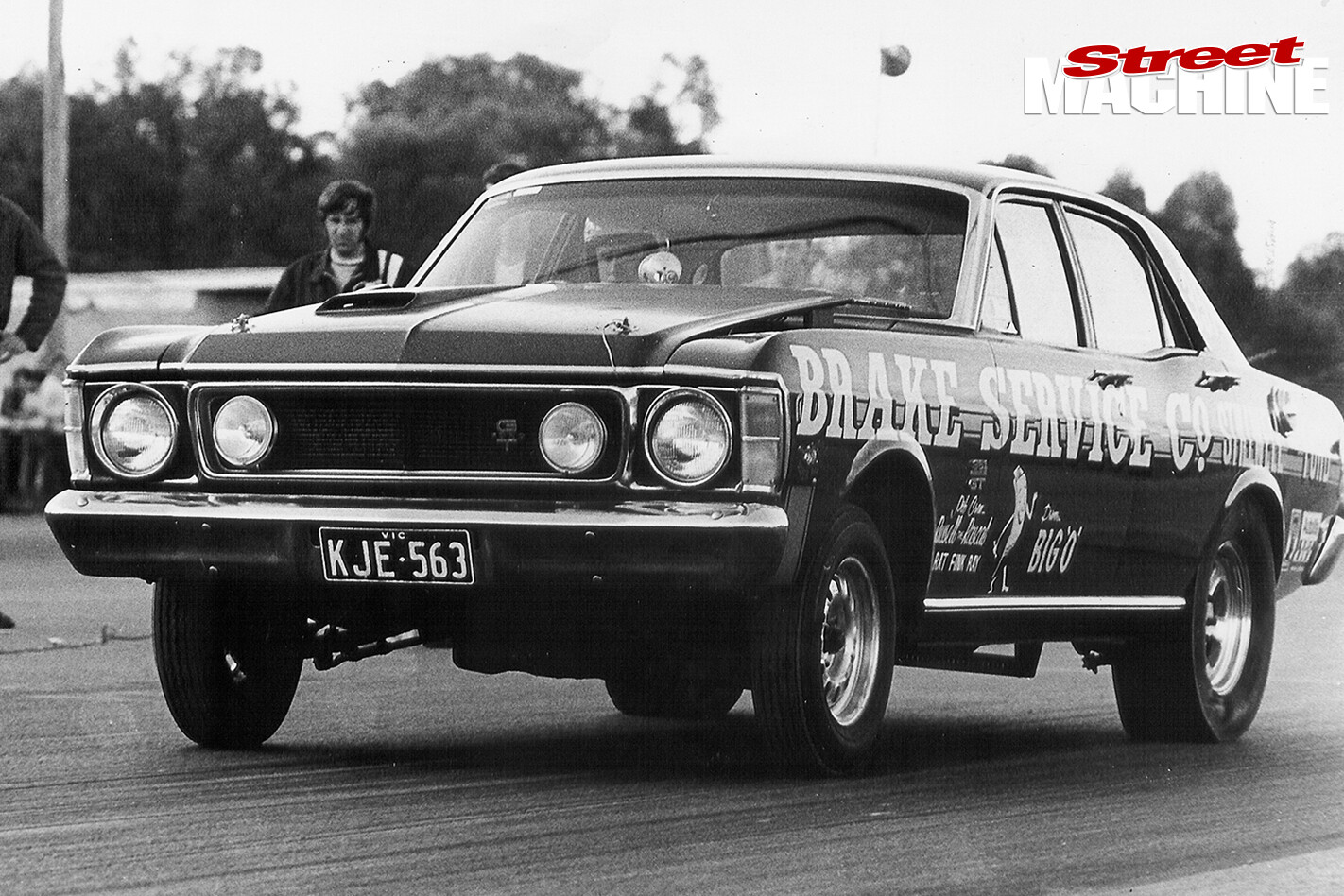 One of Beechey’s employees was ex-drag racer Jack Collins, who at the time managed the drags at Calder. He suggested Ormsby bring his gold 289 XR GT Falcon out and give it a shot. So in April 1968, Ormsby found himself lined up in the staging lanes. A runner-up spot on that occasion hooked him.

With employee Colin Russell as his crew chief, ‘the Big O’, as he was known, set out to knock the sport dead. Success he certainly enjoyed, and with regular television coverage of the action at Calder he was noticed by important people. In early 1969 Ford dealer Bib Stillwell contacted Ormsby and said that Al Turner from Ford wanted to talk to him. Turner was an American who had been brought out by Ford to build the Super Falcons for Pete Geoghegan and Allan Moffat. He offered Ormsby access to a new Falcon through Stillwell’s dealership at a dealer price, and to the full range of Ford performance equipment and advice.

Ormsby's XW didn't change too much for the 1970 season, with just a new set of mags, a close-ratio gearbox and the propped-up bonnet

After waiting for the new 351 engines to become available – to give him an edge over the 327 Monaros that had been beating up on the smaller-cube Fords – Ormsby debuted the new XW GTHO in October 1969. It set a strip record on that first race day at Calder and grabbed runner-up in Stock at the ’69 Nationals a week later. Its times improved to a best of 12.68 seconds as the team became familiar with their new ride.

In 1970 it ran at 23 race meetings and made the final at all but six of them, and won Street Eliminator at the 1970 Nationals.

In 1971 Ormsby’s factory backing was stepped up and he moved to a new 351 Cleveland XY. The XW was sold to fellow racer John Maher for use as a street car, and so its long journey to Mark had begun.

The engine might look pretty stock, but it's not. The rules of the day didn't allow too many modifications, but Ormsby got all the hot gossip from the Ford tech department, so it's a pretty angry bit of gear

The more Mark discovered, the more he became entralled by the car’s story, and finally his wife Sharyn suggested he commit to a full-blown nut-and-bolt restoration. She may have come to regret that proposal, as the project blew out to a five-year commitment and a cost of over $100,000!

Mark’s plan to was to return the car to the condition it was in when Ormsby first began racing it. He tracked down Ormsby and his crew chief Colin Russell, and spoke to various people who’d worked at Ford, all the way up to Turner. The car was entrusted to Steve and Ian Brown of Brown Brothers Auto Restorations, in Waroona, south of Perth. Over six months they took the car down to every single basic component and had the metal bead-blasted, finding everything underneath the paint in good order. Authenticity was the keyword. Dean Hampton in Perth removed every nut and bolt, and where not replaced, they were re-coated or replated.

Mark’s mate Robin Chalwell was tasked with rebuilding the engine, following the specs used by Ormsby, which were very close to stock as the race regulations of the day didn’t permit too much out of the ordinary. The cam was aftermarket, as were the ignition timing and the distributor set-up for the tacho and the exhaust. Some parts, such as the cable-drive tacho with its key reset, took a lot of chasing.

It's not too often you see a GTHO with this kind of set-up. The ladder bars were originally fabricated by Ron Harrop and helped get the big Falcon off the line

The driveline was rebushed and cleaned up as necessary, but it otherwise remained original.

Internally, the door trims remained as found, but the seats were retrimmed and the carpets replaced.

The exterior was finished off in candy apple red by Brown Brothers, and then new or repainted stickers were applied to match the original set-up. Again, this took a lot of research, with some lucky finds, such as a pair of Paul England stickers for the rear guards that had sat in the bottom of a drawer for nearly 40 years.

And if restoring the car back to its former glory wasn’t hard enough, Mark also tracked down and restored the original Ford D-Series tow truck and found the same type of caravan that the Big O favoured on road trips. That’s dedication!

Once completed, Mark loaded the Falcon onto the truck, hooked the caravan behind and, along with 19 other Fords from the Falcon GT Club of WA, headed across the Nullarbor to Bathurst for the 2013 Falcon GT Nationals. There it won its category and was reunited with Ormsby, who flew in for the weekend.

“I was astonished at the standard of restoration,” Ormsby says. “Everything seemed just as it had been when I raced the car; everything was just as we had it. Mark invited me to sit in the car and start the engine, and we soon had people 10-deep around us. I would have loved to have taken it out and driven it but there was nowhere there where we could give it its head, and I doubt that Mark would have wanted to risk seeing me bend his new toy. I take my hat off to them.” Back at home in Perth, the car has seen little action, spending the vast majority of its time in the garage. “My business has been deeply involved in the Gorgon natural gas project in the north of the state, and that’s taken all my energies and focus,” Mark explains. “I’ve had the Falcon on the road a couple of times, but I’d have to say it’s not easy to drive in those circumstances, and being based in Perth we are away from most of the larger events to which I might take it.”

Nevertheless, he still plans to attend several major events on the east coast, particularly once the Gorgon project is off his plate. 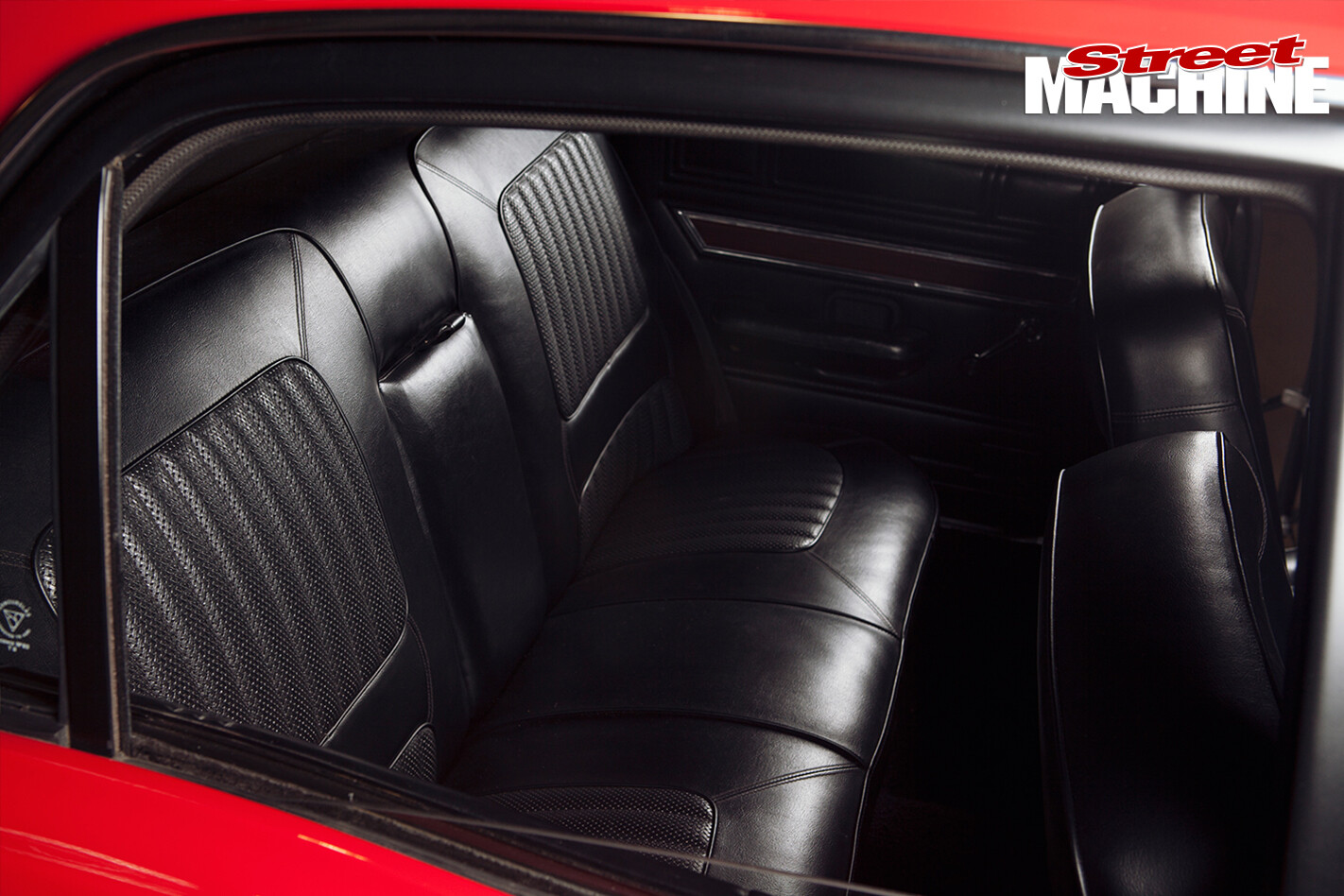 Mark’s pretty happy with where the car is in terms of set-up, though he has arranged to purchase a set of the Splatt mags that Ormsby installed during 1970, and may jack up the back of the bonnet to emulate Ormsby’s set-up through much of that year.

Otherwise he is pleased with what he has recreated – a wonderfully preserved monument to the days when true Australian muscle cars dominated the quarter-miles and when factories were happy to support initiative and passion.