Scott Moreland follows in the footsteps of his late father, ensuring this family-heirloom S-Series Valiant is cherished by future generations

I'M amazed by the creativity still thriving in our scene. Some of the cornerstone models in street machining have been receiving the modifiers’ touch for damn near 70 years – you’d think everything that could be done has already been done – yet we are still blessed with the passion and individuality that sets some builds apart from the rest. 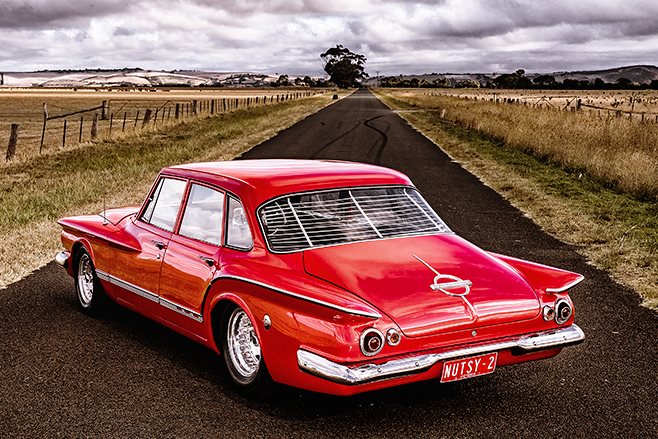 Stance and rubber are two key elements when it comes to building a tough streeter, and Scott has nailed both. The original 25-spline Valiant diff snapped axles like they were toothpicks, so a shortened AU Falcon diff was slotted under the rear, running a full spool and 31-spline axles

Take Scott Moreland's S-Series Valiant, for example. When was the last time you saw a first-series Valiant with tubs, Convo Pros and big rubber? Or painted bright red for that matter? I don’t think I’ve seen these mods on many early-girl Vals and definitely not all on the same car. They may be common fare for the Torana, Monaro, Falcon or even the AP-onwards Valiants, but apply these to an R or an S and you’re an innovator. 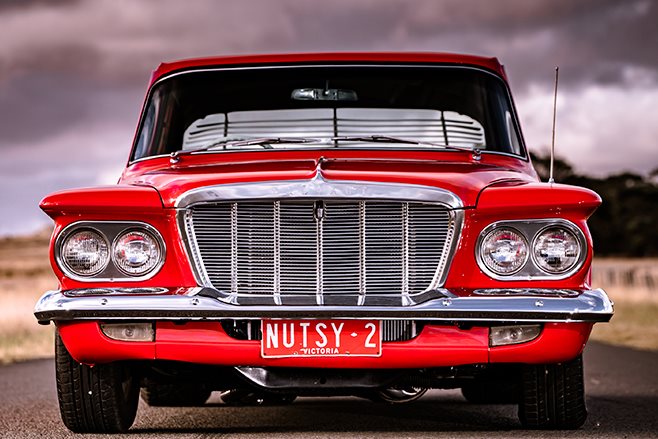 The 1962 R-Series got the Valiant name off the mark here in Australia, but was quickly short-shifted to the S-Series after only two months and 1008 units

Sure, there have been a handful of R- and S-Series Vals hotted up over the years, but most tread the familiar restored path, or tentatively embrace widened stockies or mag wheels wrapped in whitewalls complemented by nice paint. Ride height is often determined by the owner’s age; either dragging their arses as neat cruisers, or jacked up restorer-fashion with reflector-clad mudflaps, a bonnet swan and those funny little aerials down on the guards that help you park.

The last ones I recall that really took detailing and a tough street attitude to the next level was the green HLK340 S of Tony Dimitrious, or closer to home, Roy Alati’s blue No Par Mopar S that we featured back in SM, Jan/Feb ’97 – 20 years ago! 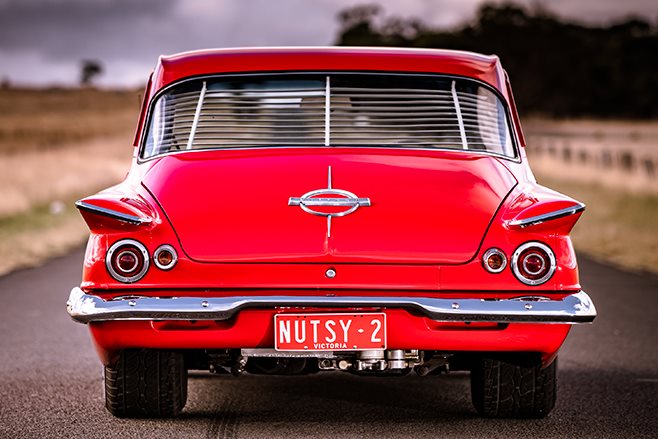 The S-Series featured mainly cosmetic upgrades over the R-Series – and sadly the loss of the R’s pseudo spare-wheel bootlid – but were a greater force to be reckoned with on the local market, with 10,009 produced

But I digress. One look at the pics of Scott’s S and you know he’s onto a winning combo. The stance and colour, along with the wheel choice and fresh chrome, beautifully highlight this model’s curvaceous body styling. But this individual look was kicked off more than three decades ago by Scott’s late dad, Ken – better known as ‘Nutsy’ to those that matter – who was given the S by a family friend, Rob, as a means to transport the kids around. 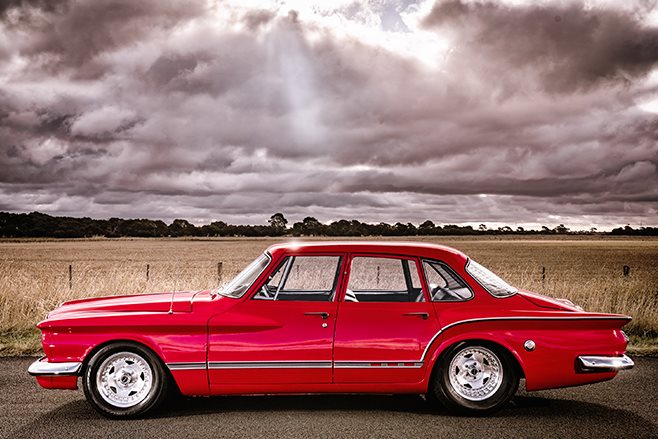 Let’s be honest, the R- and S-Series were a far superior motor car in 1962 than the competing EK Holden and XL Falcon on all fronts – looks, comfort, handling and performance – and created a legacy of diehard Chrysler fans right up until the final CM sedan dubbed ‘Last Barstard’ (sic) rolled off the assembly line in 1981

“First things first,” Scott begins. “Dad was called Nutsy because he worked at the Geelong peanut factory as a kid and the name stuck; those number plates were a Christmas present from Mum and us kids back in the day.” 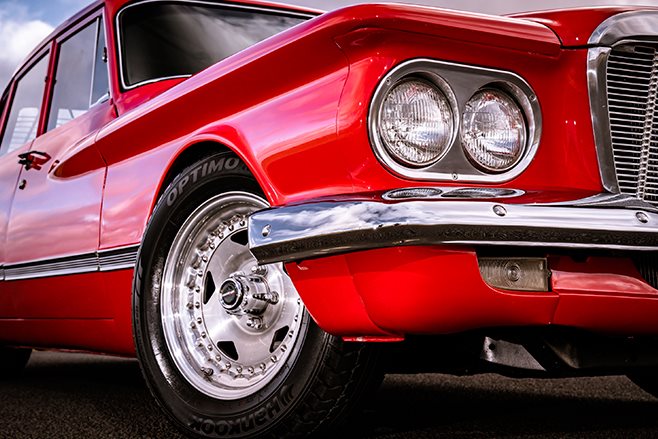 The plates were to celebrate Ken finishing a rebuild on the S that saw it hit the streets in a fresh coat of Monza Red paint and wearing a set of Skoglund mags, while the factory Slant-six was replaced with a 318ci V8 and 727 auto. “Back in those days I was an apprentice panel beater at Eliminator Body Shop in Geelong and they did a great job for Dad,” Scott explains. “He pieced it back together with help from his brothers Denis and Dave, along with plenty of VB; it wasn’t long before his cool car was done and he was rapt. We were all as proud as punch.” Sadly the enjoyment didn’t last long; Ken was killed in a car crash on Easter Saturday, 1992. 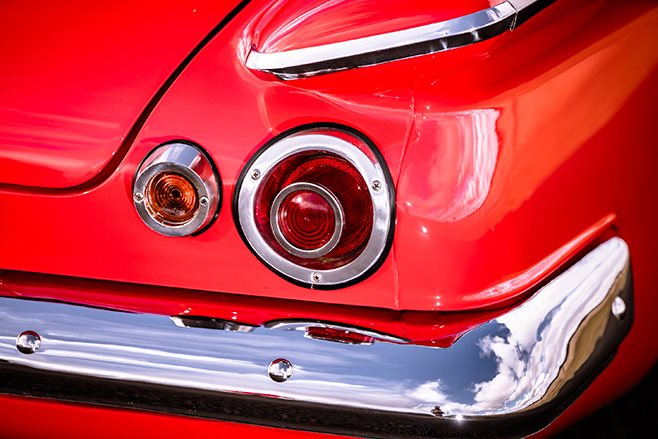 “He was our idol, and still is,” Scott says. “We couldn’t bring ourselves to sell the car so it sat in the shed for the next eight years. My brother Roscoe wanted to use it as his wedding car, so we decided to revive it. The paint was still good but the colour-coded bumpers and wipers weren’t so cool anymore, and neither were the Skogs. So on went the six- and eight-inch Convo Pros along with a narrowed diff and mini-tubs to stuff some big rubber under the back, while the bumpers were painted satin silver, which was all the rage at that time.” 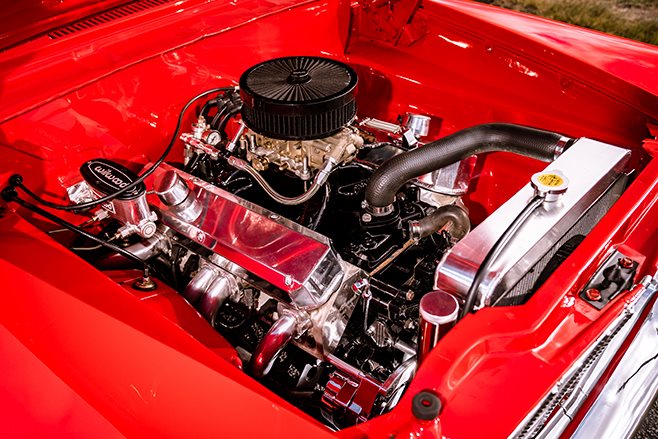 The trusty Slant-six made way for a 318ci conversion during dad Ken’s ownership, but was replaced by a stout 360-cuber when Scott’s right foot began to get a little trigger-happy

With Ken’s original 318 still in play, the red S ended up as wedding transport for all three brothers before Scott decided he wanted to up the ante on the ‘go’ side. He began talking with Ray Perrett from Don Witham Cylinder Head Service in Geelong and the pair decided to build a stout 360. Ray assembled a balanced bottom end using the factory crank and rods topped with forged 10:1 pistons, with the short motor finished by way of a Comp solid cam and baffled sump. Edelbrock Performer alloy heads matched to an Edelbrock Air Gap manifold and 850cfm Holley carb round out the intake side, while Gonzo from South Geelong Exhausts fabbed the neat custom headers and twin three-inch mandrel system.

An MSD ignition package sorts the fire in the hole, while an Aussie Desert Cooler radiator ensures maximum driveability in all conditions. 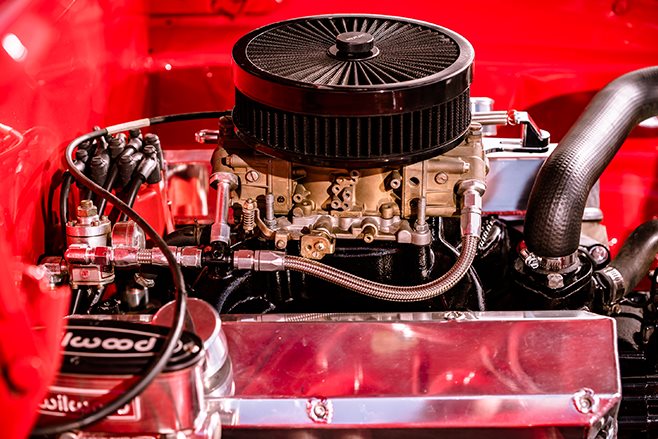 An Edelbrock top end mounts an 850cfm Holley, while the oh-so-neat headers are the handiwork of Gonzo from South Geelong Exhausts. Combined with a generous amount of bling and paint detailing, the engine compartment is as neatly finished as the rest of the S

A fresh 727 transmission now features a full-manual, reverse-pattern valvebody and shift kit, and connects to the engine via a 3500rpm Dominator converter. An A1 three-inch chrome-moly tailshaft was chosen, while the original modified BorgWarner diff has been replaced with a shortened AU one-tonner Borgy unit that features 31-spline axles, a machined-down nine-inch full spool and 3.23 gears. 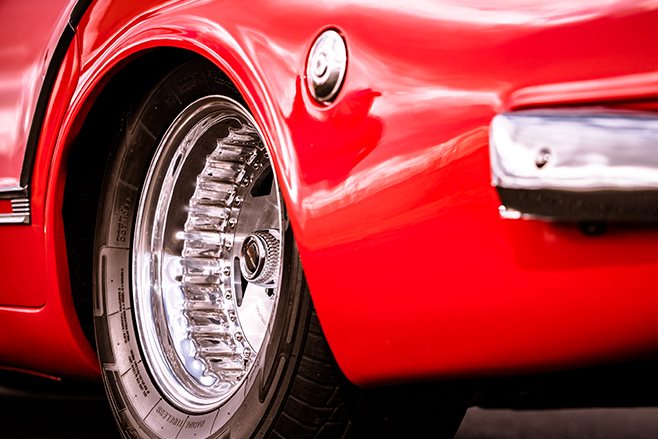 Tubbed rear wheelarches and relocated leaf springs provide ample room for the Convo Pros and 275 rubber, while the tailshaft tunnel was raised and fuel tank relocated to bring the whole shebang much closer to terra firma

This fresh rear end retains the original S drum brakes and sits atop leaf springs relocated for added tyre clearance, while CL Valiant discs are an upgrade to the factory torsion bar front end. A KJ’s rack-and-pinion steering kit not only modernises the Val’s road manners, but when combined with a notched sump and enlarged transmission tunnel, enabled Scott to fine-tune the engine fitment and pipe clearance. 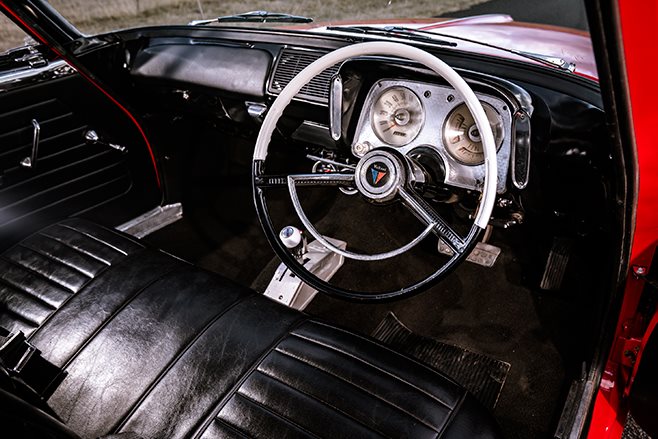 The car was now running and driving great, but after nearly 30 years the paint and interior were starting to look a little tired. A mishap with some bodgy wheel studs and the resultant panel damage were just the push Scott needed to give the car a cosmetic makeover. 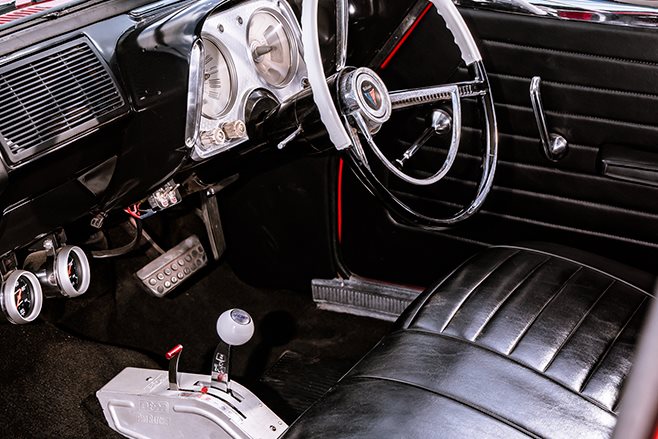 A Pro Ratchet shifter and under-dash gauges are the only changes, and worthy inclusions for the S’s mix of show and go

“It was time to pull the old girl off the road and give it a birthday,” he says. “The S had been in the family since I was a young boy, so I knew there’d be no surprises under the paint. It was stripped back to bare metal and the engine bay was smoothed, before being resprayed in Holden Sting Red by Chris Pantony. We then reassembled the car with new glass along with fresh chrome and stainless, which really pops against that bright paint.”

Ken had specced a black interior with his build, so that theme stayed put with Scott’s revamp, with a fresh retrim of the twin benches and adjacent surfaces deftly sorted by Tony (aka Dickie Knee) of Geelong. A Pro Ratchet shifter and subtly mounted gauges were the only modern concessions, but do little to detract from the S’s signature gauge cluster design and factory ebony-ivory wheel. 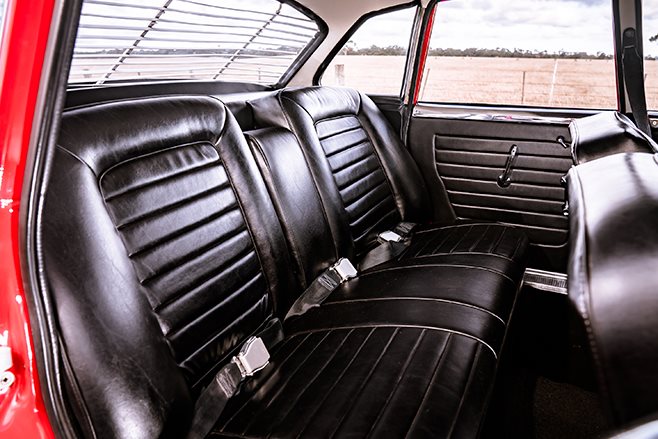 Scott and the S have been making their presence felt at a number of recent events, including Summernats 30 and Chryslers On The Murray, where the car has received plenty of attention and some great feedback. “I built it to cruise and have some fun with my mates and young family, but the greatest accomplishment has been people saying how happy Dad would be if he could see the car today,” Scott says. 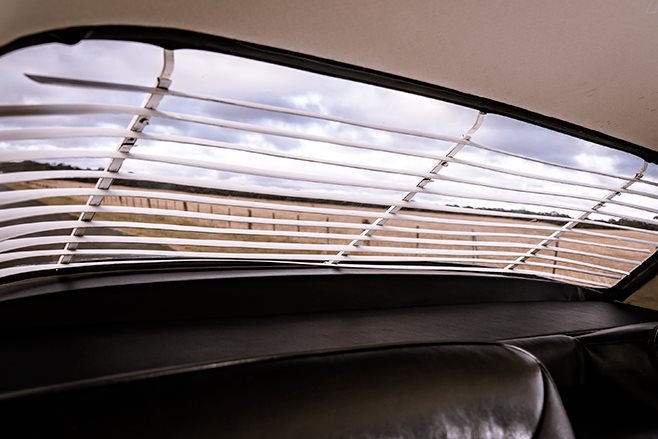 “It’s been a very emotional build with a few setbacks along the way, and I really need to thank my wife, Sarah, and our kids, along with a few close mates for their time and my effort. And of course my brother Roscoe; he doesn’t know one end of a spanner from the other, but has a knack for shit-stirring me and keeping me motivated when times are testing.

“I inherited my lead foot from Dad too, so the car cops a hiding whenever it’s called for,” Scott laughs. “But overall I just hope he’s proud of what we’ve achieved; RIP Nutsy. Love ya.” 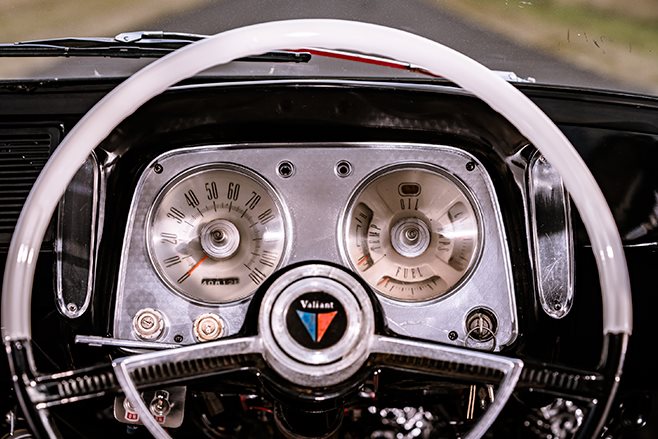