Steve’s world is rapidly spiralling out of control; his mother (McGregor) shuns him to start a new life after leaving his high-maintenance alcoholic father (Hehir), while his brother (Cook) pushes Steve to sell drugs at his high school.

Steve learns to rely on stealing, lying and cheating to make ends meet, but finds solace – and the chance to be a kid – through hanging out with his best friend, Moose (Truswell – ‘Nudge’ from Hey Dad!), who does an epic Frank Spencer impersonation, and schoolboy crush Vicki (Allaylis). 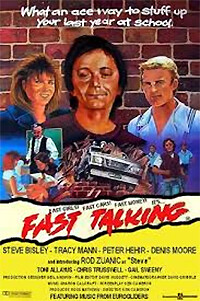 Branded a distraction and no-hoper by the high-school hierarchy and local wallopers, Steve seems destined for a dull future until teacher Sharon (Mann) and ex-con motorcycle wrecker Redback (Bisley) independently detect a bright streak in him. They nurture him towards meaningful life options in an attempt to break the cycle imposed by his dysfunctional family.

Steve rises to the challenge and looks to be flourishing with this newfound guidance, but change doesn’t come easily. A minor burst of vandalism accidentally erupts into a major crime spree, and soon he has slipped back to his default setting of stealing, lying and cheating, while also slipping behind the wheel of a stolen Valiant.

It’s the cast of then-new faces along with Aussie screen legends that make this flick sizzle. Zuanic, who was discovered at a Blacktown high school, portays Steve in a disarmingly natural way, as if he’s not really ‘acting’. The acclaimed Tracy Mann (fresh from the hit ABC series Sweet and Sour) and sure-thing Steve Bisley need no introduction and undoubtedly served as mentors to the younger actors both on and off screen. But Peter Hehir as Steve’s father Ralph trumps all with his portrayal of a low-rent alcoholic greyhound trainer battling with demons.

A sadly forgotten and underrated Australian cinematic gem, Fast Talking mixes laugh-out-loud hilarity with poignant drama. Though made and set in the mid-80s, it raises issues still pertinent to present-day Australian society. Certainly, the storyline, characters and themes will resonate with many Gen-X viewers – we all remember someone like Steve Carson – and perhaps help to explain a few of our behavioural traits, love for the simple trappings of our youth and fear of any bamboo that looks like a principal’s cane.

An AP6 Valiant has its slant donk pushed to the edge as it tries to outrun the local fuzz in their VH Commodores. Some great street scenery with plenty of now-classics in their natural environment