Flathead fanatic Mike Davidson takes us inside his shed for a look at his creations, including a bonkers twin-flatty streamliner

SOUTH Australia’s Mike Davidson wrote the book on Ford flathead V8s – literally – as well as producing a range of go-fast gear for them under the Flatattack Racing brand. Now, he’s built a streamliner powered by two of the suckers that he’s hoping will crack the 300mph mark. “I’m the only one running flatheads out on the salt,” Mike says. “That’s why I had to build a car with two engines, to keep each other company!” 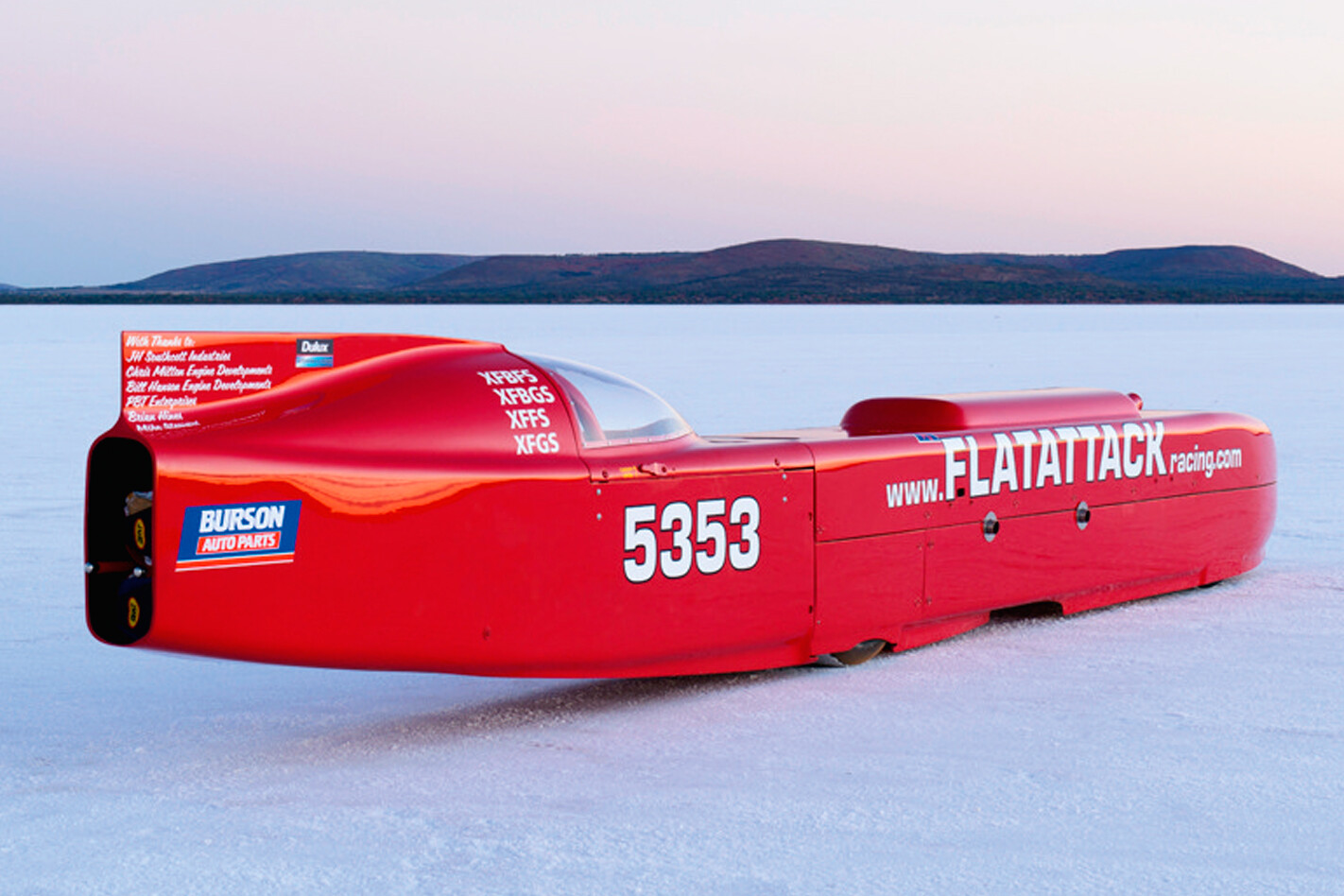 What got you into hot rods?

Reading my older brother’s Custom Rodder magazines as a teenager. After that I wanted a ’32 Ford roadster, as I reckon that’s the ideal hot rod. In the early 80s I bought one in pieces for $2600. It was a basket case. So I rebuilt it as an all-steel ’32 roadster hi-boy, running a flathead, because I reckon they’re nostalgic.

What’s the appeal of the sidevalve?

The flathead is an amazing engine. Sure, it’s a piece of junk if you really want to analyse it, but there’s a huge amount of records and achievements that people have made from this 65hp motor, the first mass-production V8. 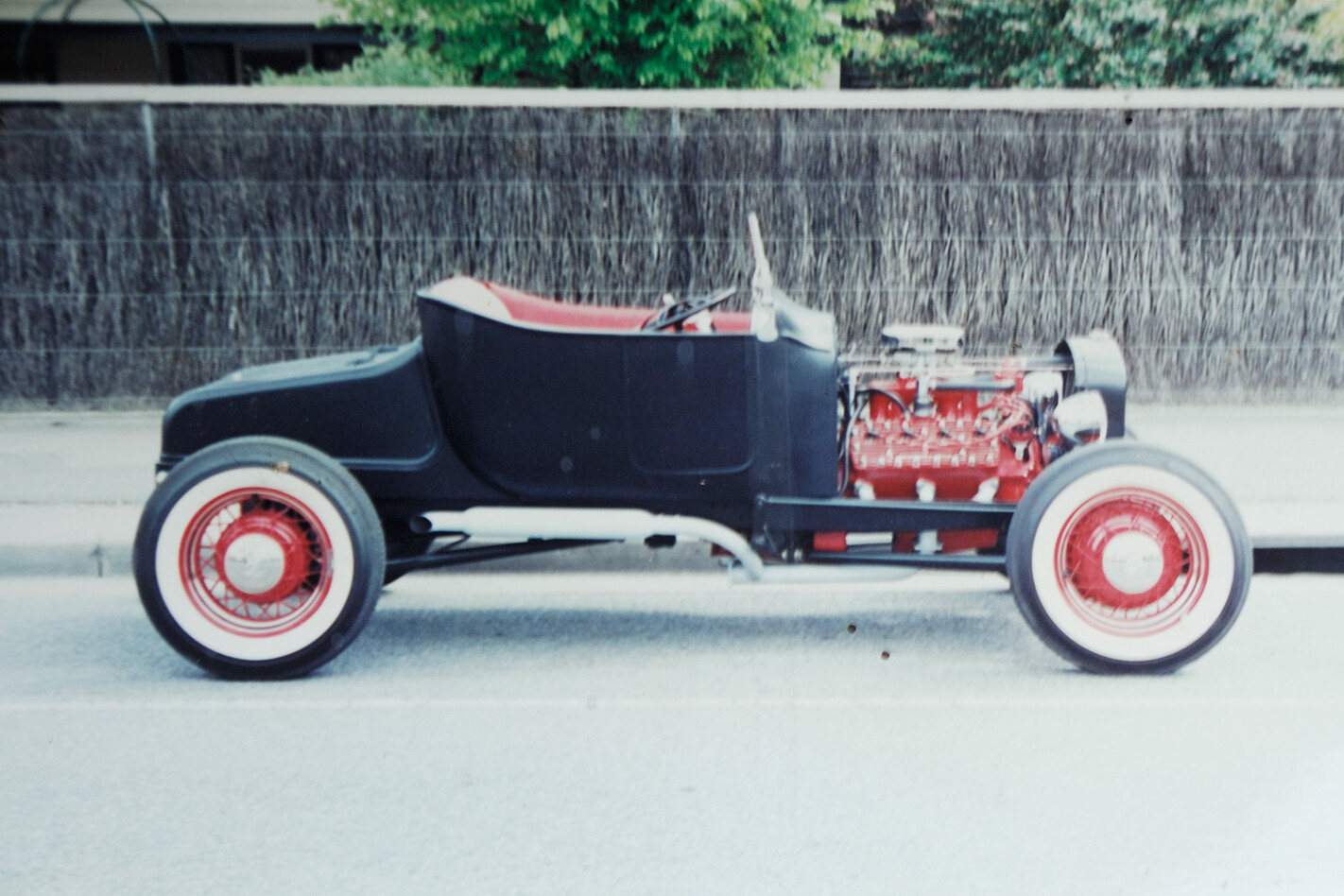 "The 'glass '22 was inspired by Ed Iskenderian's car. There was so much torque that I could take off from a standing start in top gear and put my foot flat to the floor without hesitation. Rod Hadfield bought it off me, less the motor and gearbox"

After my ’32, I built a ’glass ’22 roadster. The power-to-weight ratio was pretty good and it went well. I street-raced it against a Mustang in the 90s. We were neck and neck – he couldn’t believe it. So we had a second drag – same result. I reckon he thought it was an old flathead piece of shit – ‘I’ll beat that.’ Ha! It had a two-speed Powerglide and fuel injection, then later a Powerdyne centrifugal supercharger. 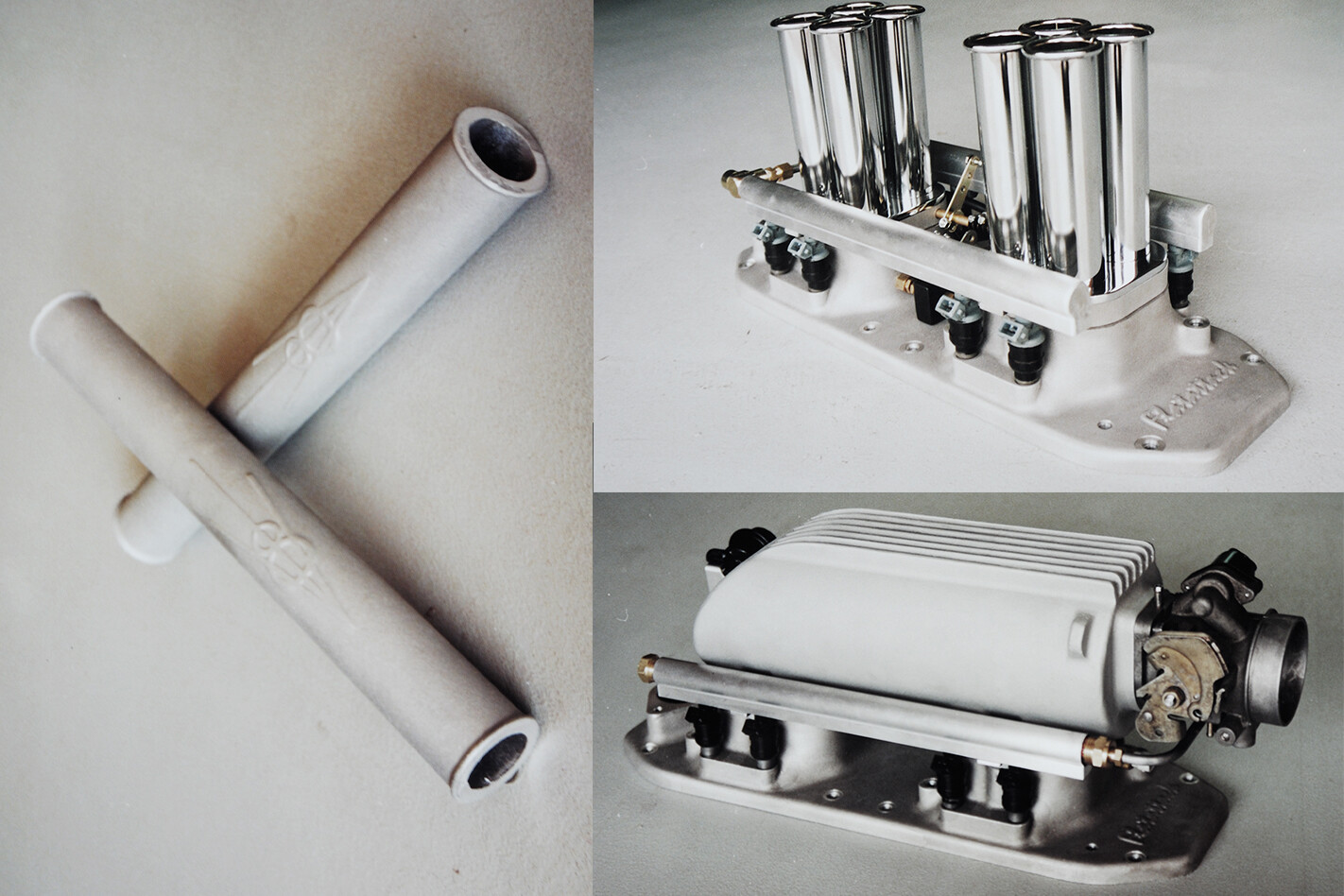 Some of of Mike's prior products. Unfortunately, those uber-cool V8-logo cooling tubes were too expensive to manufacture. Both the EFI plenum and super-sexy Hilborn-style fuel injection are sadly no longer manufactured

How did you start making and selling flathead parts?

There wasn’t much available for flatheads when I was building my first hot rod, especially out on a farm. So I started making bits and pieces. By the time I had my ’32 up and running, I was making parts as a side business. That hobby then grew into full-time work. No other business has gotten into flatheads to the extent that I have.

I’ve done three books over the years, which I’ll soon join together as one. I wrote them to pass on my knowledge. There were other books prior to mine, but I don’t think they added anything new. "I'm now semi-retired, but I once sold everything you needed to build a flathead. If I didn't have it, you didn't need it. I've made 50 sets of my current Flathead heads, same as on my streamliner. Sets have gone to Sweden, the US and NZ. They're made on demand...I've never made a lot of money as it's a niche market," Mike says

So what got you into salt racing?

Reading in Hot Rod magazine all about Bonneville; then later visiting there. I came back and I called Andy Jenkins, who was trying to organise Australian salt racing. I soon grew impatient and Andy said that Lake Gairdner might be the go, so I went for a look. Having been to Bonneville, I knew what I was looking at and I thought: ‘This is the shot!’ So in 1990 I spent $4000 and put on the first meeting. We had 24 people and seven cars. That also started Dry Lakes Racers Australia (DRLA), so I’m member number one and was the president for the first decade.

How has it evolved over the years?

Initially it was people running their street cars, but now we’re getting custom-made salt cars; there are two streamliners and a couple of lakesters. At first we camped at Mount Ive station, which meant a daily 72km round trip to the lake. So later we moved to have a large camp 12km off the lake’s edge and a smaller one – originally set up by Rosco McGlashan – 500m from the lake. In 1993 it became a national park and, more recently, under native title. Now we have to pay more people to be able to use the lake and they’re all looking over our shoulder.

Mike's previous salt racer was this slippery 1927 roadster, which held multiple records and ran a best of 176mph in XF/BFMR. It ran in both blown and normally aspirated forms

What was your first salt car?

My first proper salt car was a ’27 T-Model roadster. It was reliable and ran in Vintage class due to the flathead, therefore limiting the useable technology to that timeframe. I took out four Australian records with the fastest speed of 176.6mph, but I couldn’t push much past that due to the class limitations. That’s when I decided to build a streamliner as it’s the one class you can do anything you want. There’s regulations, but it is total innovation; I’m running modern fuel injection, a supercharger and nitrous.

How was that to build?

The streamliner has been like a hot rod build; there’s fun in chasing the parts, the construction process, then later you get to start it up and finally you go test-driving. I’ve achieved so many goals just by doing that. I love the engineering side of things. Though I could’ve done three hot rods in the time it’s taken to construct this.

How did you link the two V8 flatties together?

The motors are joined using a custom-made dog drive with a rubber coupling between so there’s no metal-to-metal contact. I’ve lined the engines up perfectly; there’s only three-thou run-out between them – about the width of a piece of hair. They’re all solid-mounted; there’s no give.

Moulded from the Arivett Brothers' US-based electric streamliners White Lightning and Lightning Rod, Mike's version is very much his own and highly modified from the original chassis plans. Fitting a taller bloke in the cabin and a couple of flatheads were electric batteries once resided meant a heap of tweaking throughout. Eight years in the making, the end result is a feat of engineering genius

What speed are you aiming for?

I want 305mph. My first goal is to beat the current 276mph record set by Kenz & Leslie’s 868ci triple-flathead 777 Streamliner. The class has changed, though, limiting me to 325ci. I don’t think the 276mph is an issue, but the 305mph might be. Next year’s goal is to get into the 200mph club. And my life’s ambition is to get into the Aussie 300mph club. Only one guy has done it and I’m sure he’s lonely.

What about Australia’s salt racing future; is it looking good from where you stand?

Oh yeah. I think we’ve got everything pretty well sorted out. We are very fussy when it comes to safety. Some competitors have had to catch up to the standards set to put us on an equal footing with the Americans. As the DLRA membership heads towards 1300, more people can have fun safely.

Mike's streamliner is a tight fit. "You're lying in the car, not sitting. I was keen on a periscope until I tried one at Bonneville. I needed to lie flat and look straight up to see perfectly - it'd freak me out driving like that! I want to see where I'm going to some degree," he says

What’s your next project?

It’s a single overhead cam conversion for the sidevalve V8. That’s just a dummy (pointing at the unit on a bench); it’ll be a hemi head with custom-made cams, Mitsubishi valves, guides and rockers. And I’ve solved the overheating problems by removing exhaust from the block. About a decade ago I wanted to create Hemi-looking rocker covers, but I soon scrapped that and went for the real thing. No one’s done it before.

What are your expectations?

I’m sure it’ll make over 200hp, doubling the horsepower. My goal was to make it more efficient, creating more economy and more power. I’ll run it on a digitally controlled dyno and put the results on www.flatattackracing.com.

How much will it cost?

Tell us about that.

It will be rat rod-like, painted in red oxide but with perfect engineering. It sits on Waddington ’32 rails and I’ll widen the body to fit perfectly. I like the look of Joe Pirotta’s A-model Caddy tail-light rear guards. So I’ll do something similar, and the front cycle-guards will be covered on the inner-wheel side. I plan on putting on my goggles and hat and driving it to the 2015 Sydney Rat Rod Day.

We spotted a Hemi in that ’32 Ford five-window.

Mike's Hemi-powered '32 five-window is going to be a tough hot rod. She'll run a T700 auto, lock-up converter and VL Group A four-pinion BorgWarner diff. "Everyone's got a nine-inch, but you don't need one. I won't break the diff; the car only weighs a tonee," Mike says

The Hemi is a good engine. This one is a 392ci that I pulled out of a 53,000-mile ’58 New Yorker in Missouri. I’ll use a dual-quad intake with fuel injection and I should get 25mpg. Have you looked underneath the front? It’s a twin I-beam and it’s the only hot rod in Australia with that front end. I spent 40 hours making the separate axles and brackets to make it independent, unlike the single I-beam. 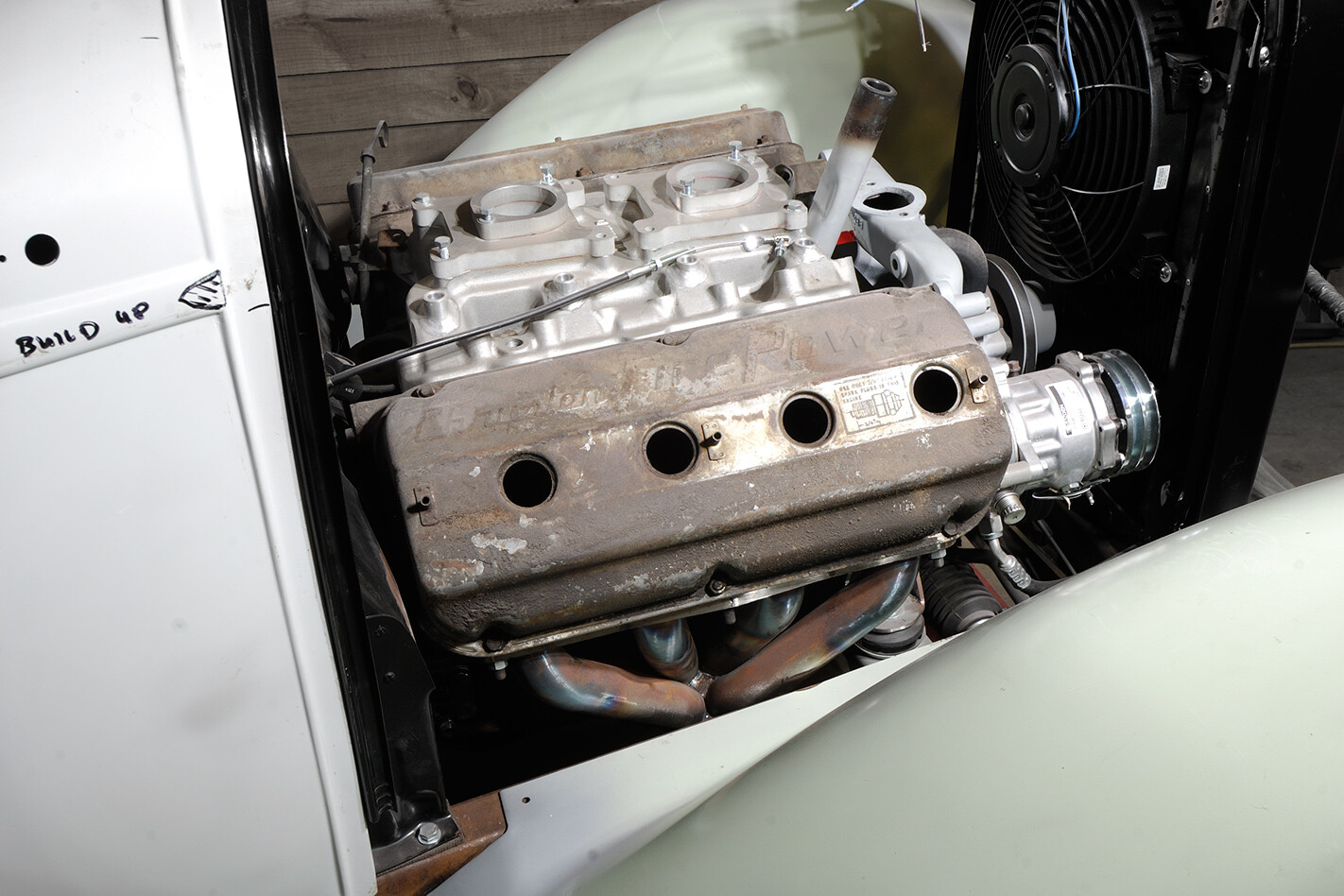 Who has inspired you?

Mickey Thompson. He didn’t f--k around; he just went out and did it. It’s such a shame he died prematurely because that guy had so much potential.
Overall what’s the biggest thing you’ve learned?