FORD’s Barra inline-six mill has made a huge impact on the Aussie aftermarket tuning scene in recent years, and is fast becoming the country’s favourite go-to performance mill. While it’s still hard to deny the appeal of an angry V8, at the end of the day horsepower trumps all – and the Barra can make ponies by the truckload. 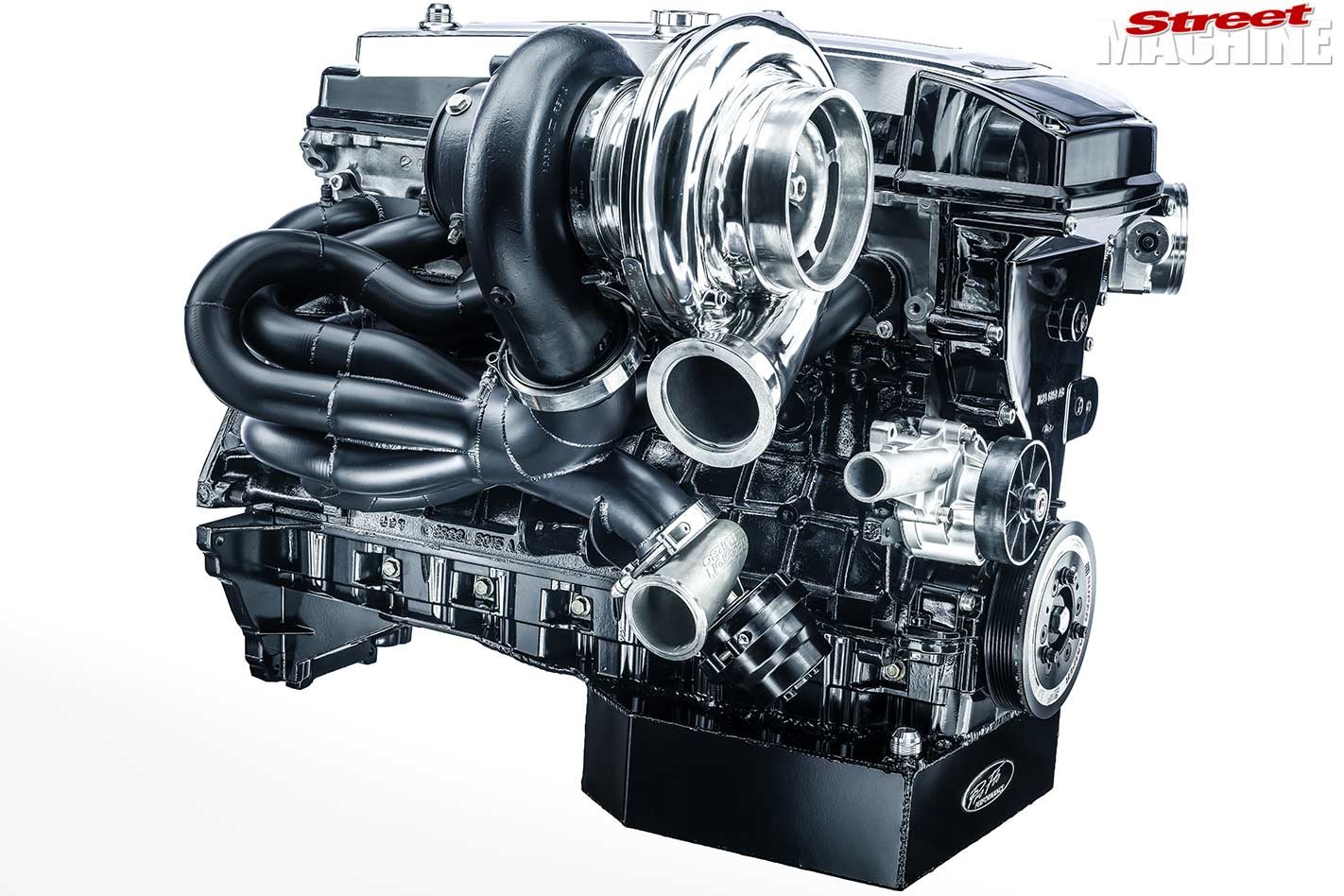 The example presented here is a concoction put together by Paul Sant and the boys from ProFlo Performance in Rossmore, NSW. ProFlo has built some mental cars and engines over the years, so the numbers behind this monster mill should come as no surprise.

“The goal for the build has changed a bit over time, as we originally started on it when Barra tuning was still a fairly new thing,” Paul says. “We’re now at that point where it should easily make 1000hp at the tyres.”

Watch next: Why is the Ford Barra motor so good? 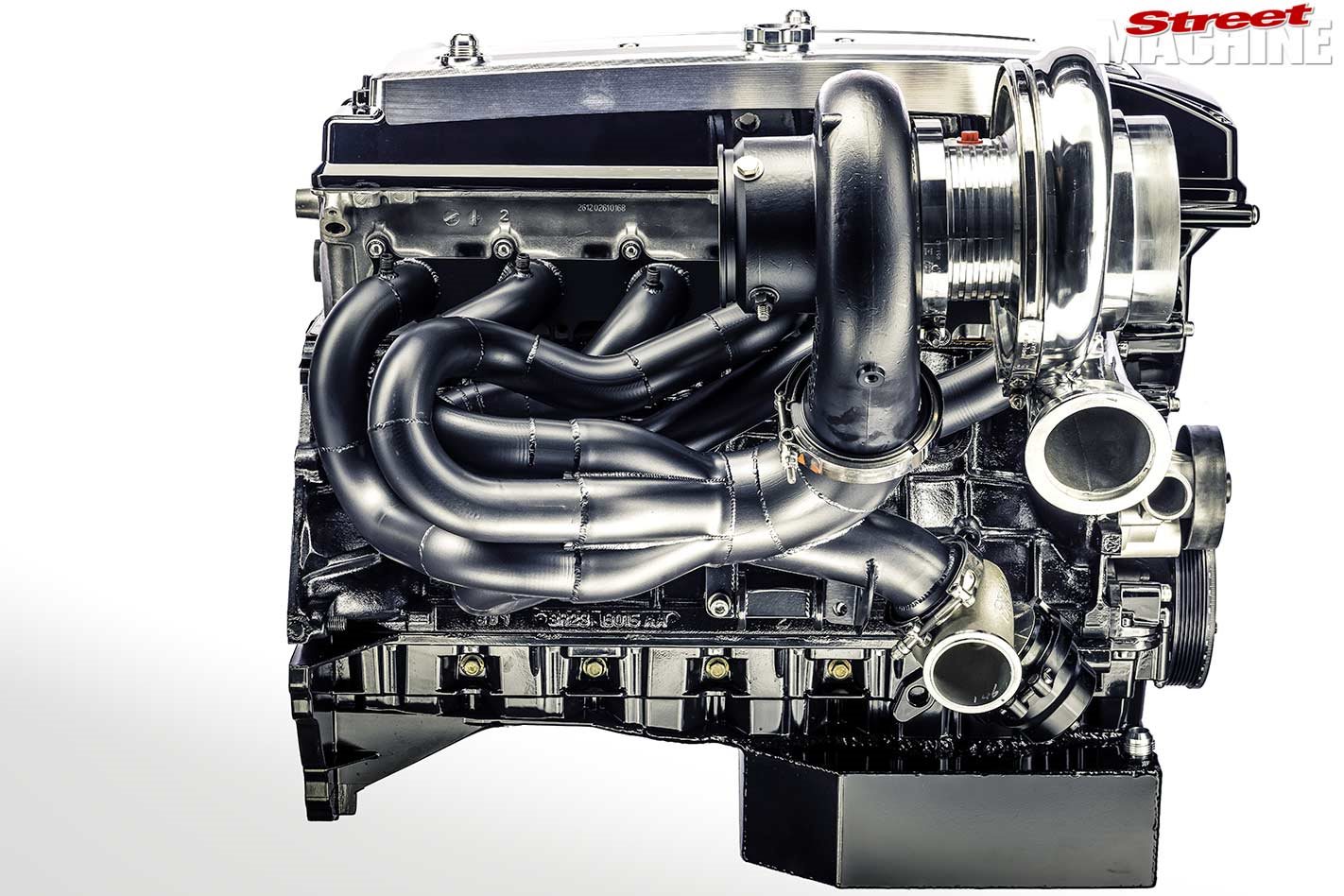 While the block is in essence the same as the one you’d find in a BA Falcon at your local wreckers, this one wasn’t robbed from a family hauler with 300,000 clicks. The car’s owner, Nathan Giunco, sourced a brand-new block straight from Ford, and the build went from there. The block stayed untouched barring a grout-filling treatment up to the Welch plugs. Atomic parts own the bottom end of this deal, with an Atomic billet crank, billet main caps, girdle and oil pump gears. CP pistons and Argo rods keep the capacity at four litres, all wrapped up in a ProFlo front sump with a mammoth nine litres of oil capacity. 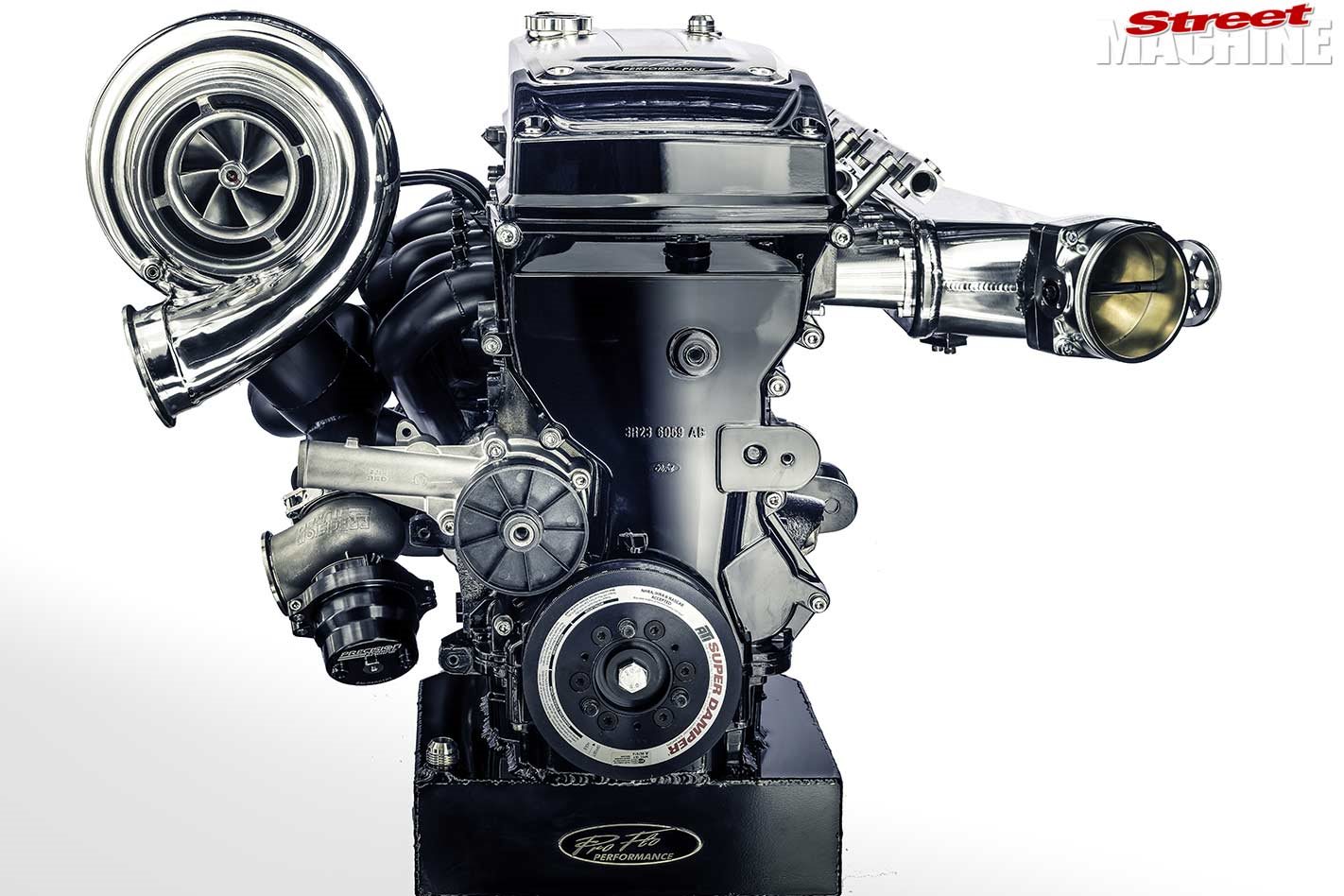 The top end consists of a BA/BF-series head, modified to take 14mm head studs and ported in-house by ProFlo, running a set of Stage IV Atomic cams and valve springs. The beastly intake manifold is a Hypertune special making home to 12 injectors, but the real party piece is the mesmerising exhaust manifold. “We wanted to make something that would really stand out, but also provide the flow and performance that we were chasing,” Paul explains. 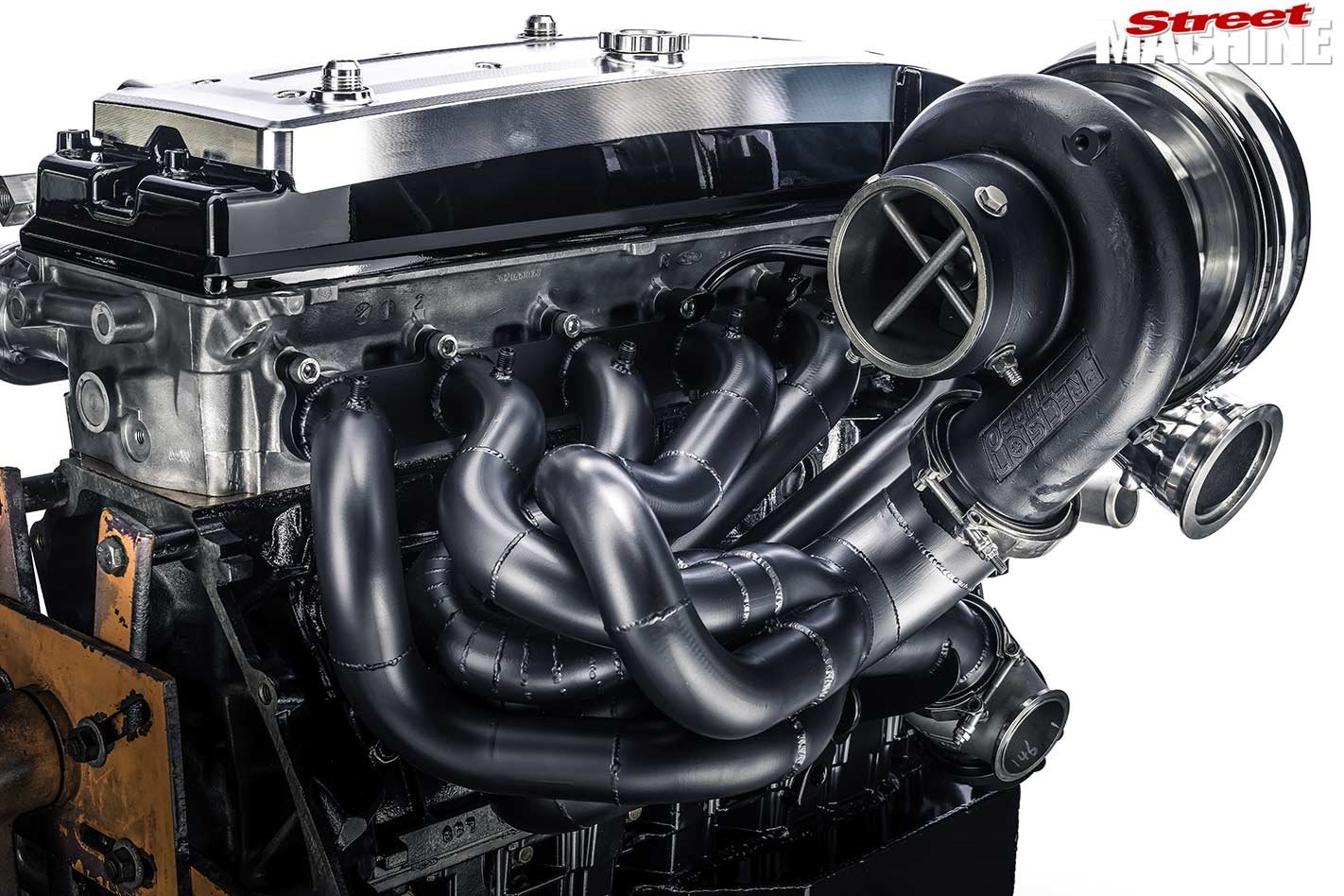 The crowning jewel sitting atop all that craftsmanship is a Pro Mod 88mm Precision turbocharger, which will spin to around 30psi depending on how hard the boys want to push it. “We should only need around 30psi to get to the 1000hp mark, but there’ll be more left in it if we want to push later,” Paul says.

The brains behind the whole deal will be a FuelTech FT600, mainly feeding the donk with E85 but still leaving the door open for flex-fuel later on in the process. 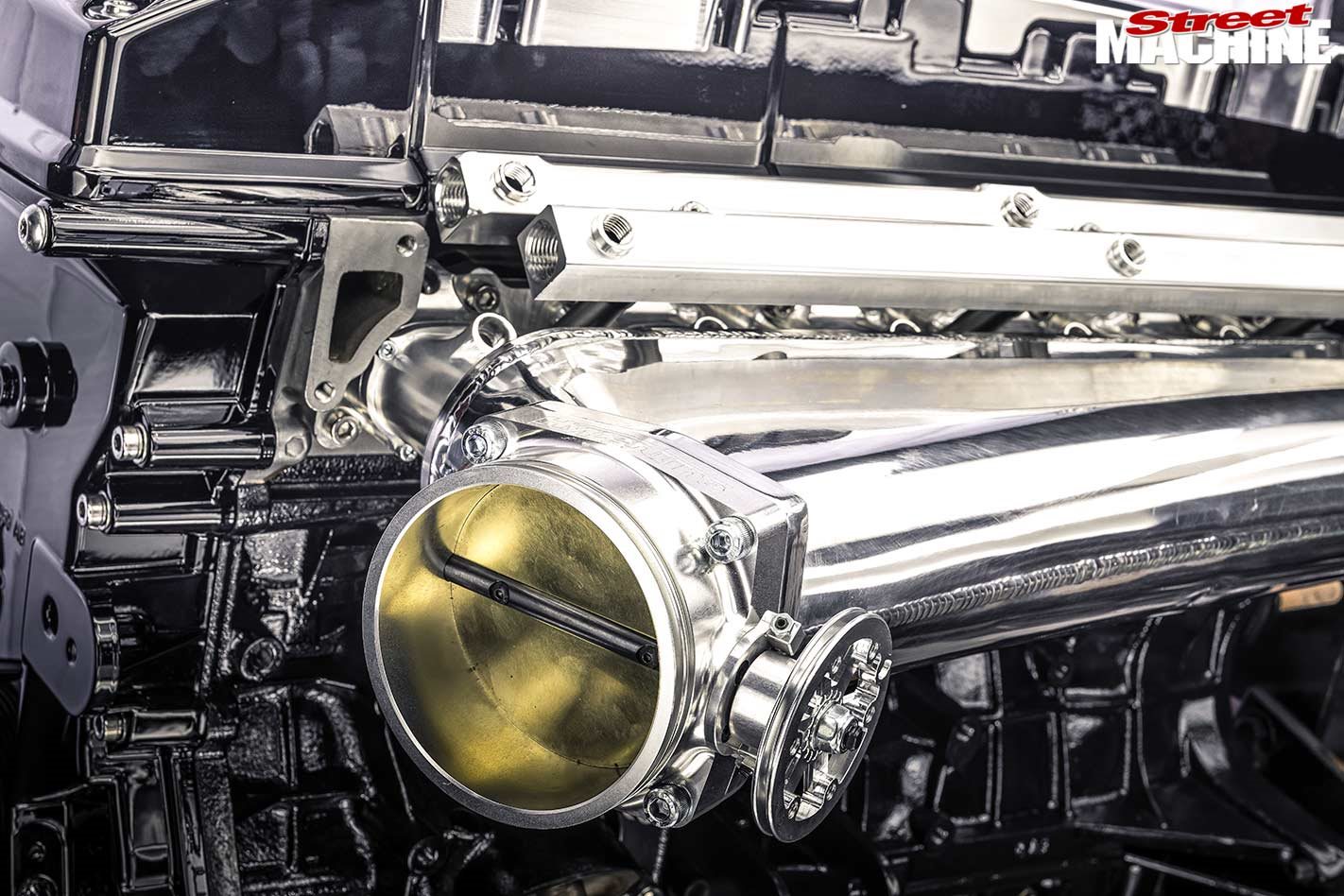 The Barra is still yet to breathe in anger, waiting to be dropped into Nathan’s XE Falcon street car before its first run-in and tune. “The car has been in the build for roughly 10 years now,” Nathan says. “I had three main goals for the build: to get 1000hp at the tyres, run an eight-second pass, and powerskid the whole main straight of Eastern Creek at Powercruise.” 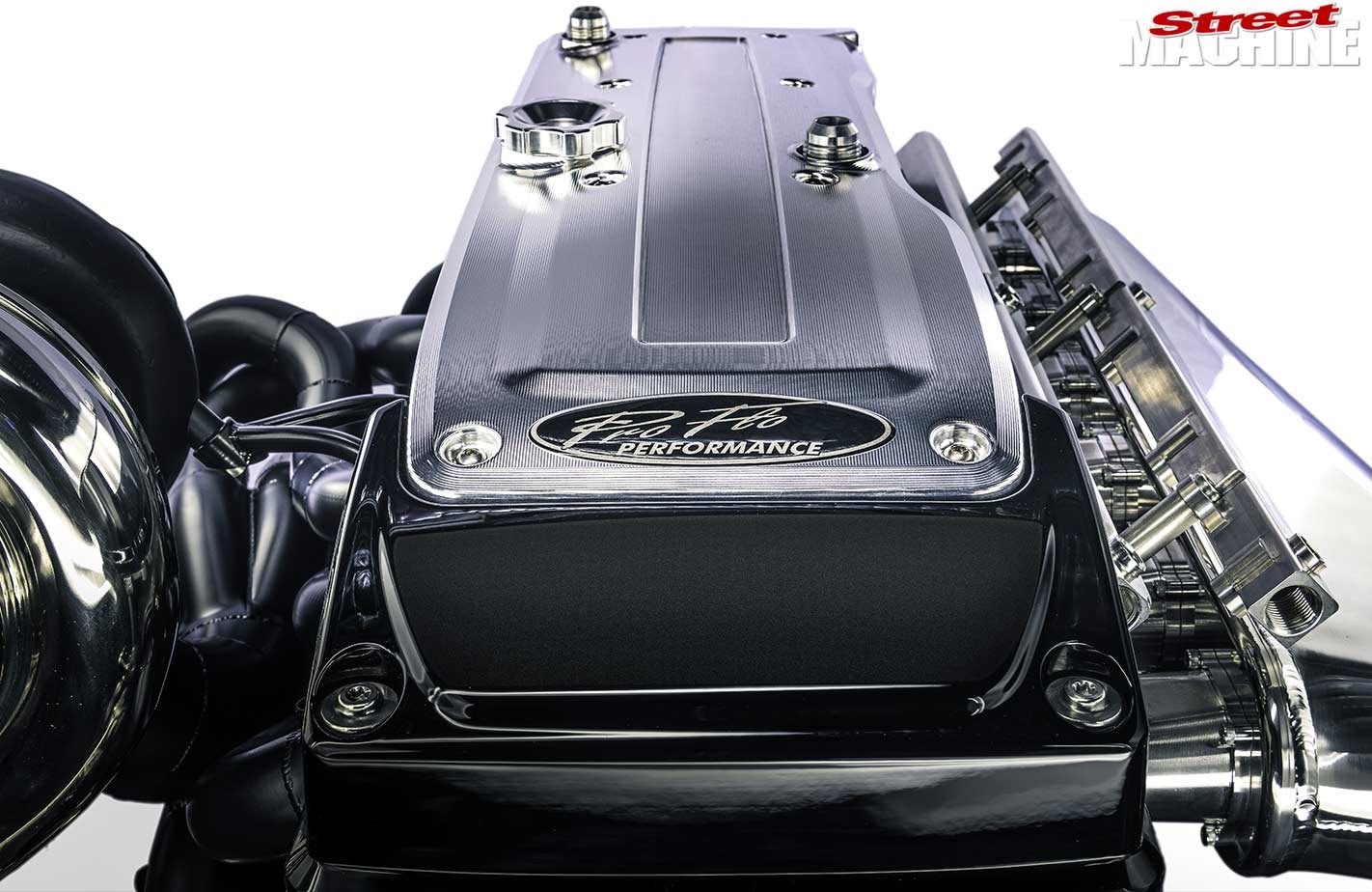 Nathan hopes to have the donk in the car by the end of summer, as he is pushing to get the XE finished and show-ready for its reveal at MotorEx 2020 in Melbourne. “I’ll do the show rounds for a year or two before we really start beating on it on track,” he says. “The biggest issue won’t be if the car can do it, it’ll be me getting used to it – the only fast-ish kind of car I’ve driven is my daily XR6 Turbo, and it’s dead stock!” 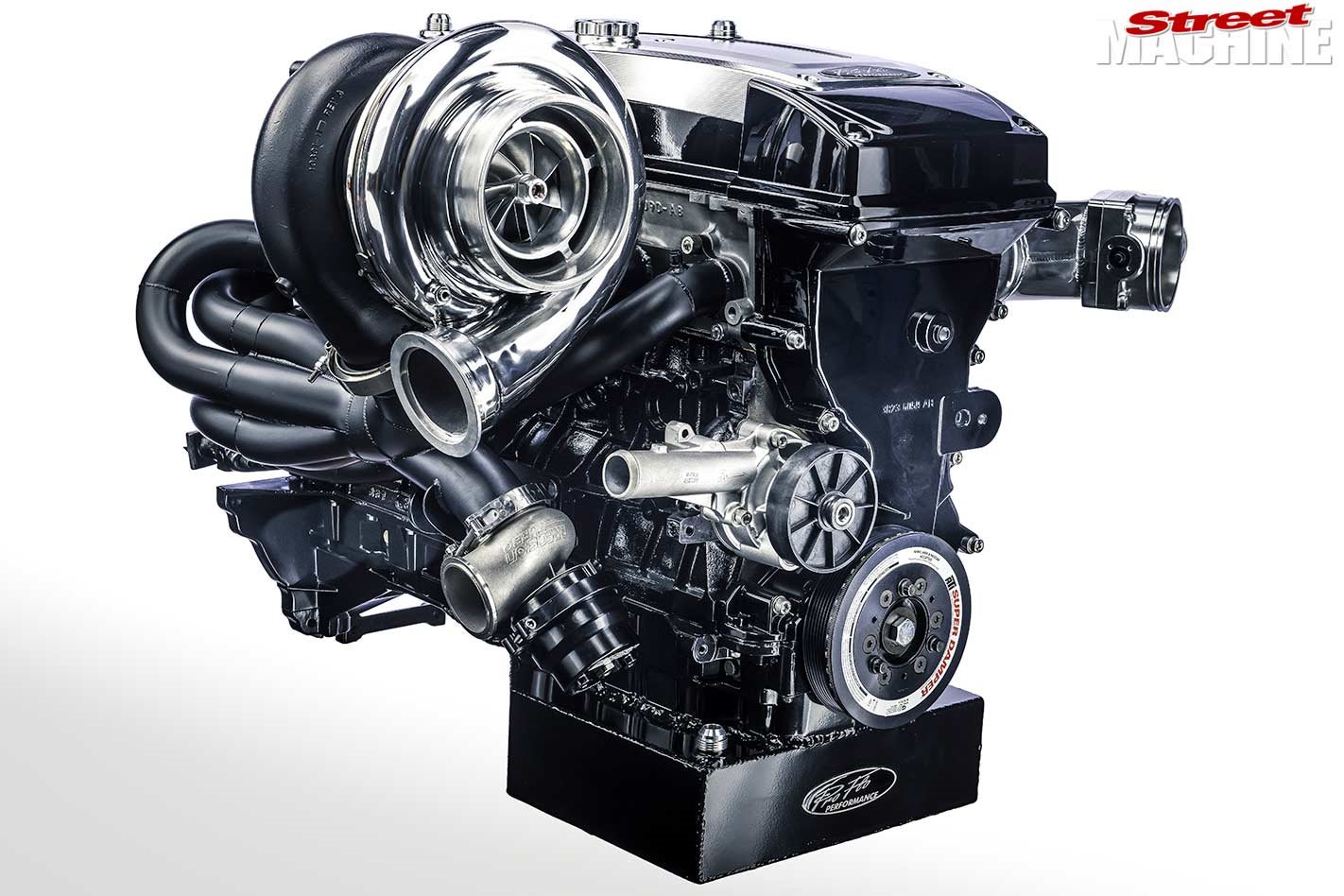 WHILE 5-10 years ago the idea of taking a boggo XE Falcon and turning it into a street monster seemed like a waste of time, the boxy 80s Falcons are well and truly making a comeback. The lucky Falcon destined for this meaty Barra is worthy of the task, having been a dream build of Nathan’s for 10 years now. Sporting a tubbed rear end with four-link set-up, complete McDonald Brothers Racing front end, drag-friendly rollcage, beautifully shaved engine bay, and interior and exterior looks to match the stonking performance, it will be one mean machine when it’s finished.