Packing a Ford Racing Boss 302 crate motor, Jason Cooke gets just as big a thrill from skydiving as he does driving his big, brown and beautiful XP Falcon coupe for the first time

JASON Cooke doesn’t really consider himself a car guy. Hell, his beautiful HOK Root Beer Kandy XP Falcon coupe is the first V8 he’s ever owned! And as for that plate? “It stands for ‘Eat, F*ck, Skydive’; the rest is self-explanatory,” he laughs. 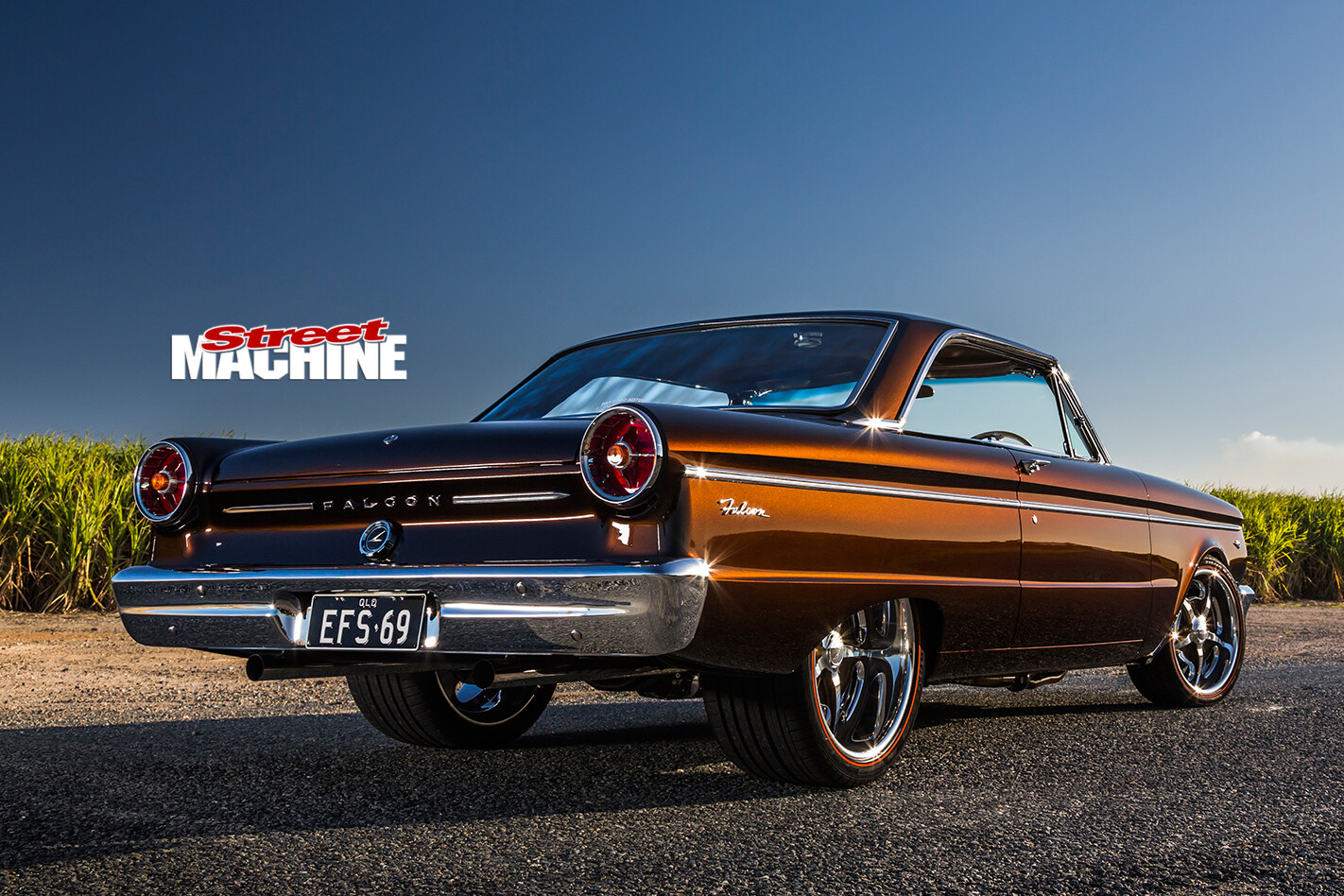 “As a kid, there was a white-over-red XP coupe kicking around my area on a set of Center Lines. It looked gangster!” Jason explains. “So I bought this Gumtree special from out west of Brisbane.” He trails off, hip pocket wincing at the memory. Jason entrusted Pat and his team at Pat’s Pro Restos & Refinishing in Beaudesert, south of Brisbane, with turning the rusty relic into a beautiful brown masterpiece. Pat confirms that the car wasn’t a great base. “Jason’s XP was one of the rustiest cars we’ve ever started with; it was everywhere,” he remembers. “There were no mysteries though; these coupes are all rusty, it’s just a matter of how rusty.”

Pat’s team unstitched the rear quarters, chassis rails, firewall, plenum chambers – pretty much everything. “We knew Jason was keen on some big rubber, so while it was in pieces we moved the rear rails in 125mm and stretched the tubs,” Pat explains. “Of course, the more we looked, the more rust we found; we had to Falconstein three cars into one.”

9
An XM coupe donated its rear and gutter rails, while an XM sedan was good for floors and other bits and pieces

Not that Jason sat back and let the Pro Restos guys have all the fun. With a trade background in monitoring and telemetry, he knew re-wiring the car himself would be a no-brainer. “I’m good at nerd shit, so I bought a Painless wiring harness; all I had to do was make sure my work was up to the high standard of Pat’s.” 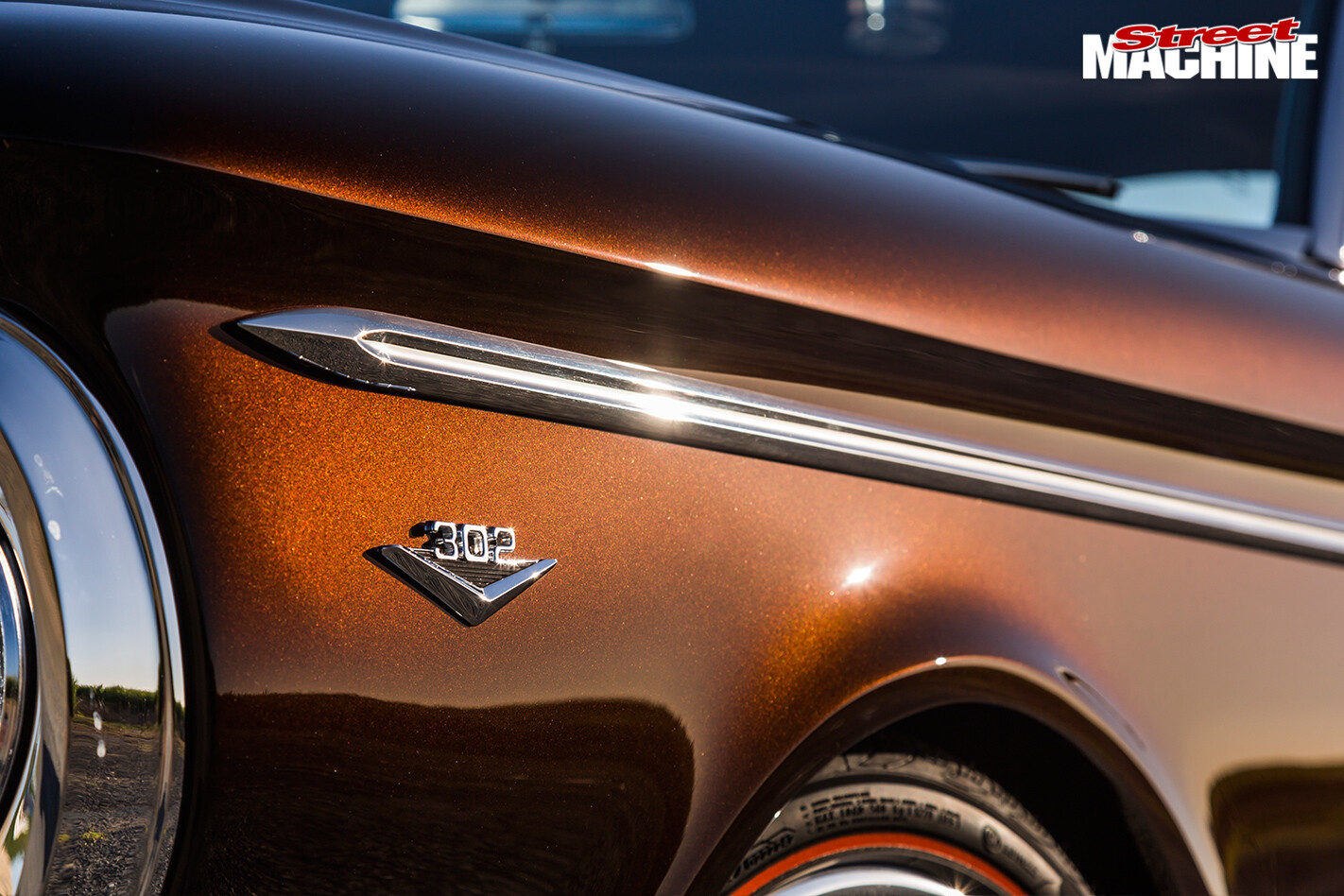 Looking at the finished product – the quality, the attention to detail, and those enormous 22in Schott Accelerator rims – you’d be forgiven for thinking there’s a bunch of custom work in the XP’s body. Not so. Most of the metal, though restored, is as Ford created it, and those long rear arches swallowed the Schotts without complaint. “I told the guys that I’m gonna drive this thing, so if it rubs or scrubs, I’ll be spewing,” Jason says. 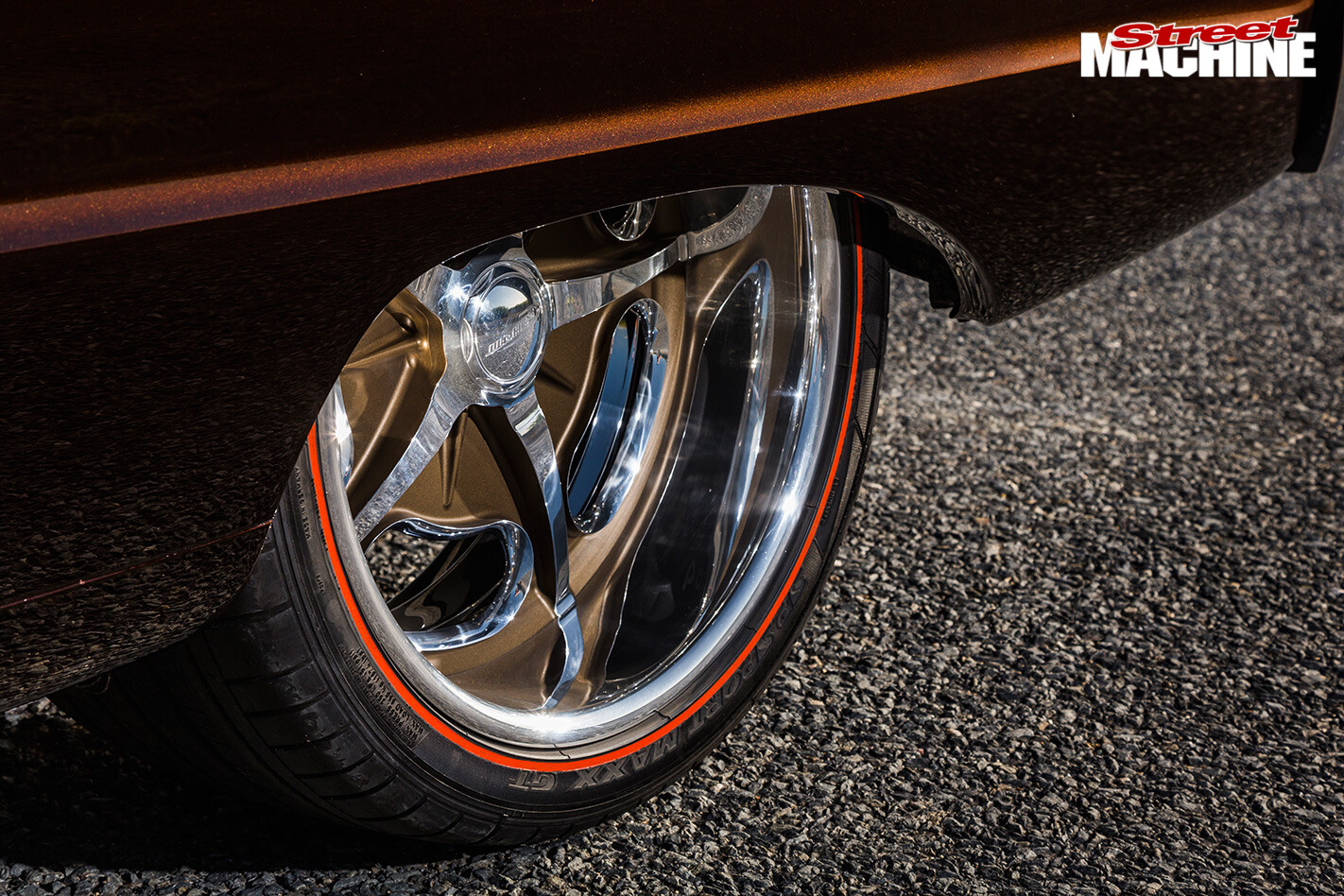 “My God, the wheels,” he continues, off on another tangent. “I visited Schott’s operation in the USA and browsed their range. I was very happy with the Accelerators, but when they turned up at home, I dropped my marbles!” You see, Jason’s not a fan of gold in any form, and that’s what his new rims definitely were. “Then I stood them up in the daylight and they changed colour,” he marvels. ”They’re perfect.” 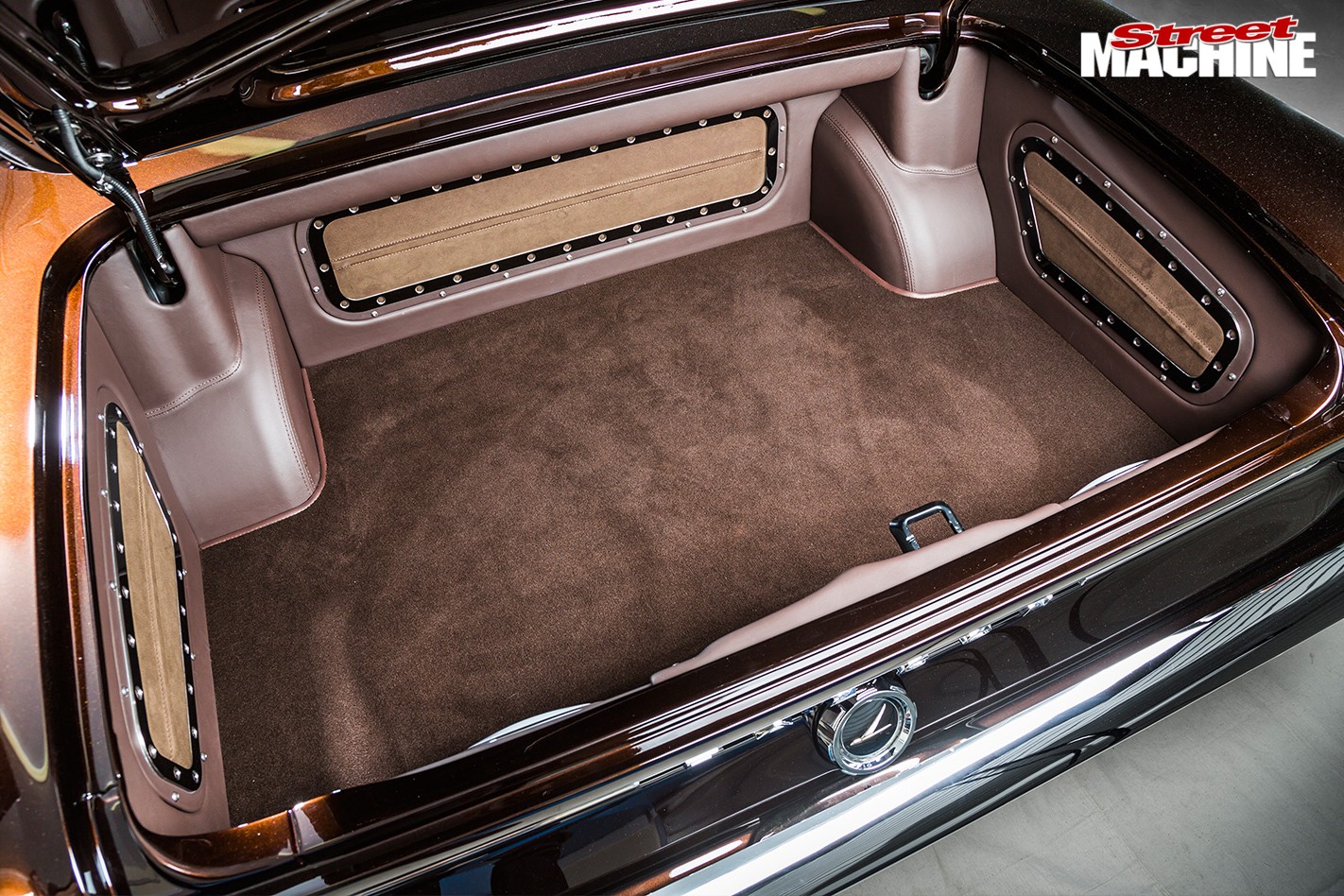 But despite Jason being all for the brown hue, initial reports were worrying. “I wanted brown from the outset; something completely different,” Jason says. “Pat kept spraying up samples and I kept saying: ‘Go browner, go browner!’ Well, when they pulled it out of the booth I was a bit worried; there was a bloody lot of brown! Fortunately, old cars like the XP have plenty of chrome to break it up.”

9
The Ford Performance Boss 302 sits nice and snug in a near-factory engine bay, with just some mild smoothing and a splash of satin Root Beer Kandy making all the difference

While Pat’s Pro Restos was working on the XP, Jason organised a Ford Racing Boss 302 long motor direct from the States. Out of the box, they’re good for about 340 horses, and Jason was happy with that, but concerned about longevity. “I’m doing this build once and I’m doing it right; I want it to last forever,” he declares. “So I took it to Tony at Toca Performance to get it balanced and blueprinted.”

9
The centrepiece of the engine is the incredible March Performance pulley kit, designed to not only locate the air con pump, alternator and other ancillaries, but to look great as well

“It was quite a nice thing from Ford,” Tony admits. “And unlike the rest of the car, it didn’t need a lot. Jason bought it when the dollar was good; I couldn’t have built it from scratch for the money he spent.”

Cracking it open, Tony found a lot of great stuff, including a Scat crank and rod set, plus eight lightweight forged pistons. After balancing the guts, porting the Ford Racing heads and aftermarket Edelbrock Air-Gap intake, then topping it all with a Quick Fuel Technology 650cfm carburettor, Tony found he’d liberated a few extra horses, making almost 400 on the bench. 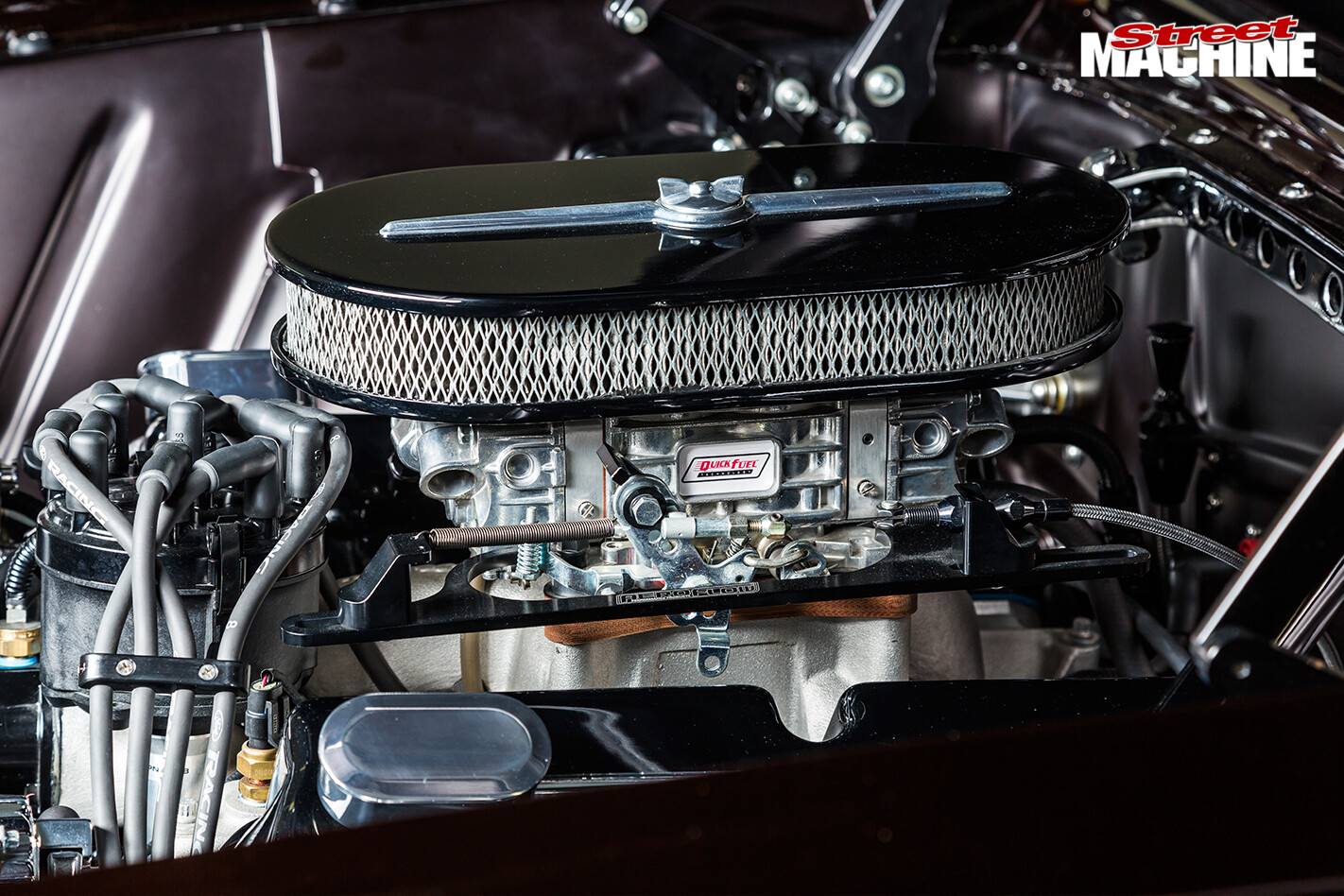 With 3000 hours of body repair and fabrication drawing closer to completion, it was apparent that the rusty old XP coupe had become something special – special enough for a full reveal at the 2016 Queensland Hot Rod Show. Of course, like all good builds, there was a humongous snag.

“We ordered the paint with plenty of time, but they sent us the wrong mix,” Pat says. “It took six weeks to get the right stuff, so we assembled the car into a runner and threw what Root Beer we had over the stone guard underneath.”

9
Although it looks factory, the styling is all Chris Bakker from Elite Interiors. Most notably, Chris widened the shoulders of the factory buckets to make them look less tombstone-y

The boys certainly cut it fine. “Three weeks out from the Hot Rod Show, this car still had no paint on it,” Pat says.

To make matters worse, the interior was incomplete, so Pat shipped the car to Chris Bakker at Elite Interiors, finishing the car off there while Chris created a unique kangaroo-hide interior. “We were still screwing bits on at 10am, the deadline for set-up. We got there at 2pm and they were kind enough to let us in!”

9
Chris also suggested going with kangaroo leather, which is strong, but can contain a lot of flaws - which Jason reckons creates character

Jason grabbed his 87-year-old dad and told him they were going to a car show. “He figured it would be a bunch of cars parked on an oval; usual stuff. We get there and he’s stunned. Then the XP gets a full reveal and he can’t believe it’s the same car!” Jason roars, laughing his head off. By the end of the show, Jason, Pat and the team’s hard work and vision paid off, with a solid Top 10 placing, Top Paint and third Top Coupe. “The first time I ever drove a V8 was driving this home from the Queensland Hot Rod Show,” Jason marvels. “I’ve jumped out of a plane almost 6000 times, but driving home in the XP was right up there.” Jason built the car to be enjoyed with his family, and put 1000 kays under the Schotts before MotorEx Melbourne 2016. There, the team enjoyed another huge haul, with silver medals for Paintwork, Engine Bay, Interior, and Impact & Display, plus a gold medal for Design & Execution.

With his first build so successful, we have to ask if there are plans for another. “I’ve got an XM Futura coupe I might do something similar with, going old-school with a 250 2V, roller cam and an aluminium head,” Jason muses. “The kids will get one each if they don’t turn out to be ratbags!”

Whatever the case, Jason, we reckon it might be time for a new number plate. EFXP, perhaps?