EVER started a car project with the intention of turning it around for some quick cash? Trouble is that cars always cost more than you think so the budget blows out. Troy Shelton took the challenge and decided he could transform this old F250 into readies. 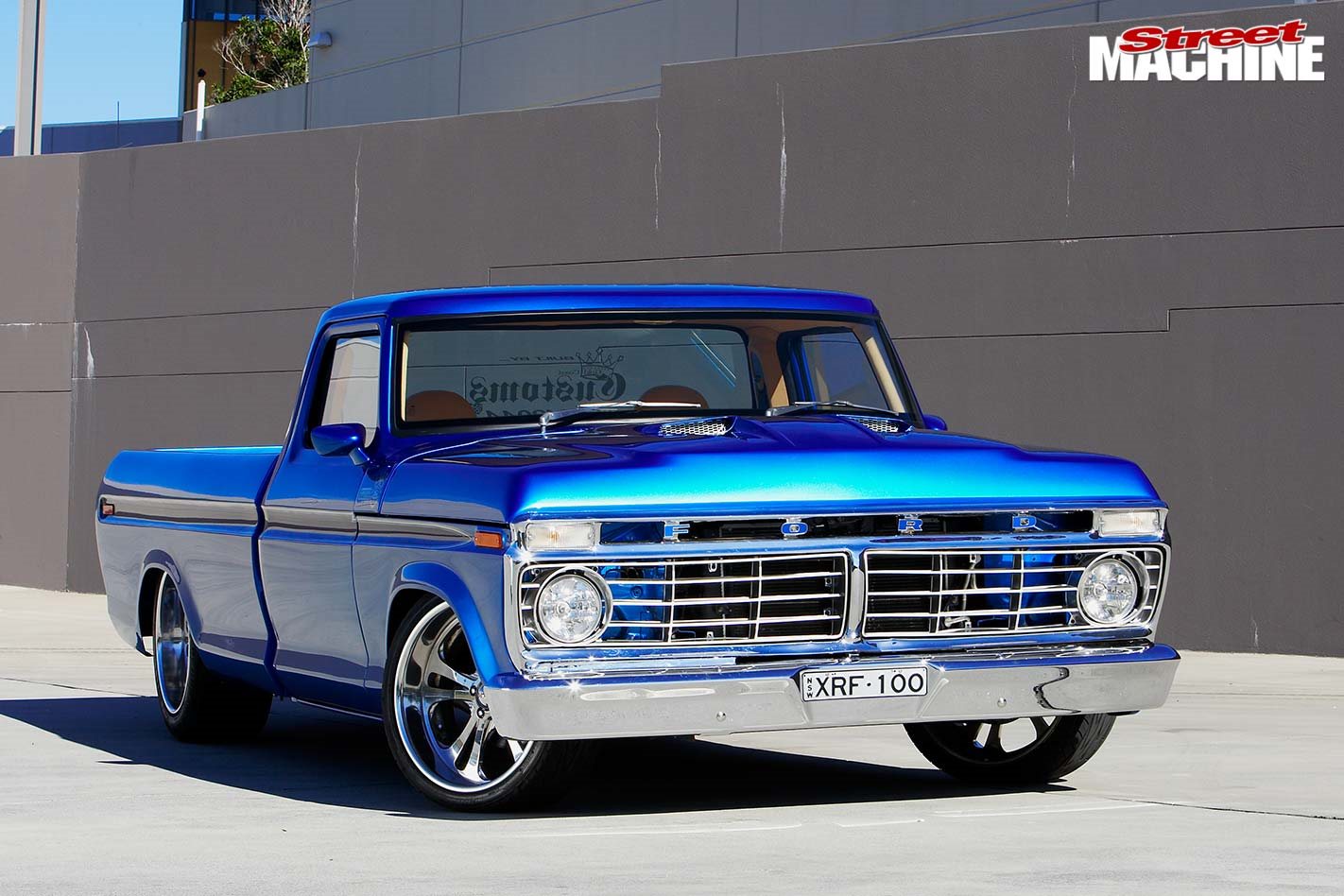 “I bought it cheap off my uncle. I was just going to give it a chop,” Troy admits.

Then he found a written-off XR8 ute belonging to a young bloke who didn’t have insurance. “The front was all right,” Troy says, “but the roof and doors were stuffed.”

Troy snapped it up and then he got to thinking — and we all know that’s where the trouble starts. 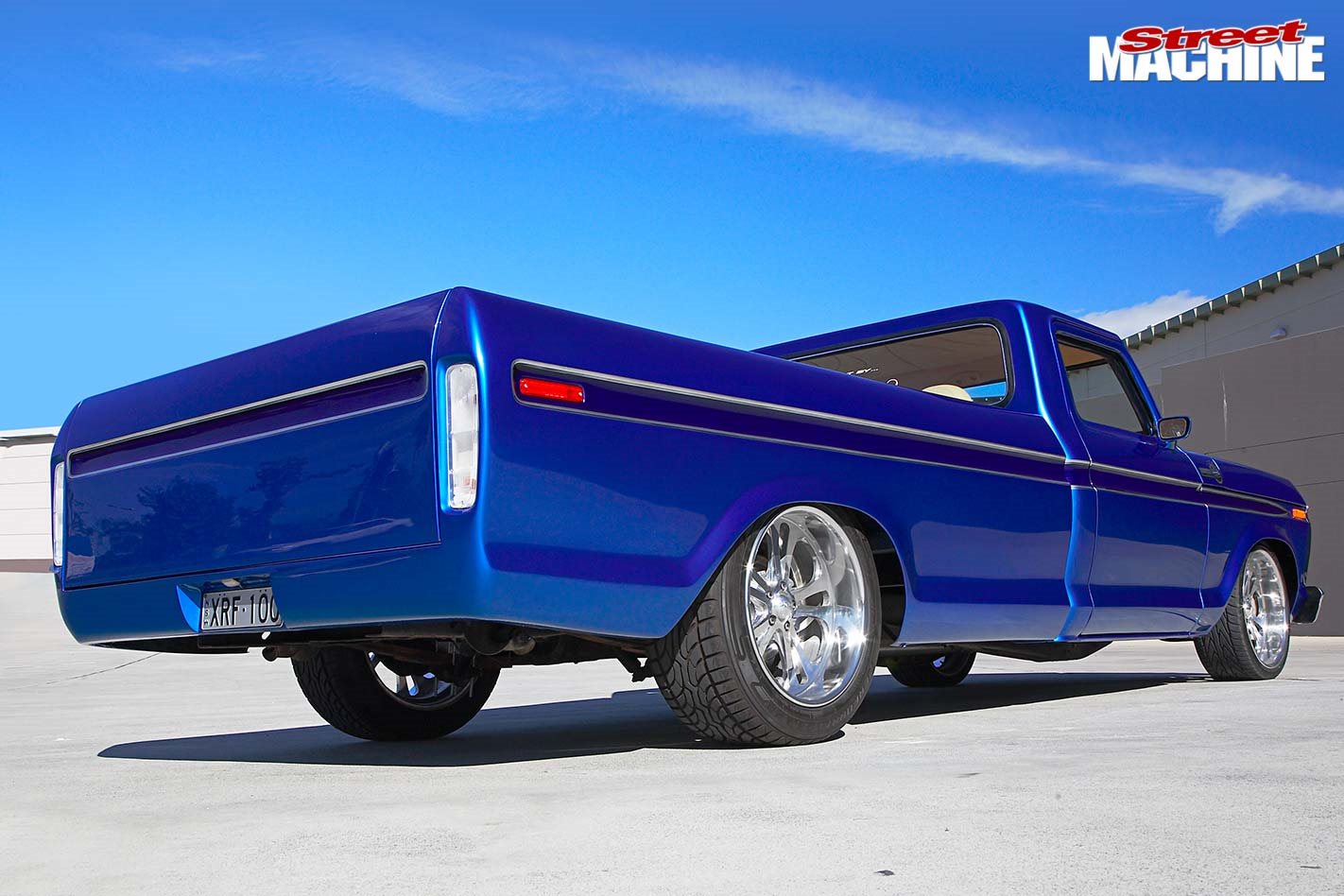 He asked good mate Chub Shevill how hard it would be to drop the running gear into the F-truck. “After a couple of beers we worked it out,” Troy says.

Now, the F250 was no beauty queen. “It was a farm truck out of the paddock — it was pretty rude.”

It had a 351 Clevo and a C6 auto, and Troy originally intended to retain those, slice it, refresh the paint and flog it off. The arrival of the XR8 wreck changed all that.

Instead of a quick spruce, the F-truck spent almost two years under the knife and emerged as one of the most highly modified Ford pick-ups we’ve ever seen. That’s a pretty big statement but describing the work that’s gone into this truck would take a book. Troy sums it up rather more succinctly: “It’s like taking the skin off an XR8 ute and dropping an F-truck over the top.” 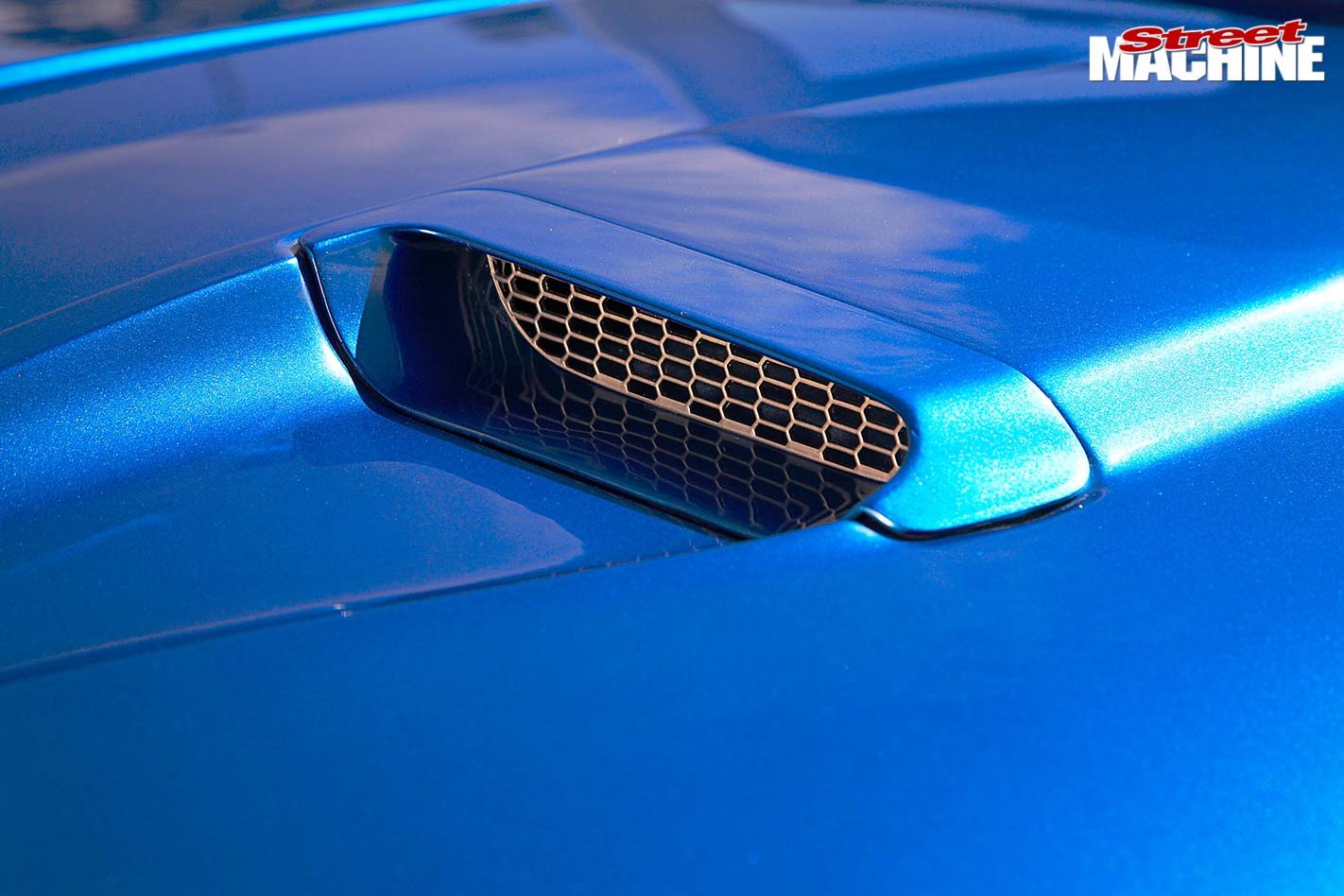 That would have been easier than the mountain of fabrication they took on. “Chub’s sort of a mad scientist,” Troy reckons, “and I’ve offered him a job.”

They cut the firewall, trans tunnel and inner guards out of the BA ute and grafted them into the engine bay of the F250. Block out the F-truck front guards and you’d swear you were looking at a super-sano BA Falcon engine bay.

The dodgy twin I-beam front and Cleveland donk have been replaced with 21st century Ford engineering.

The quad-cam 5.4-litre motor looks right at home and pumps close to 300rwhp thanks to some tweaking with a CAPA Flasher. Troy has his own business, Gold Coast Customs, and went to town detailing the donk so he wouldn’t be ashamed to lift the bonnet. The mirror-polished cam covers and manifold look awesome and an SS Induction cold air intake helps it breathe. 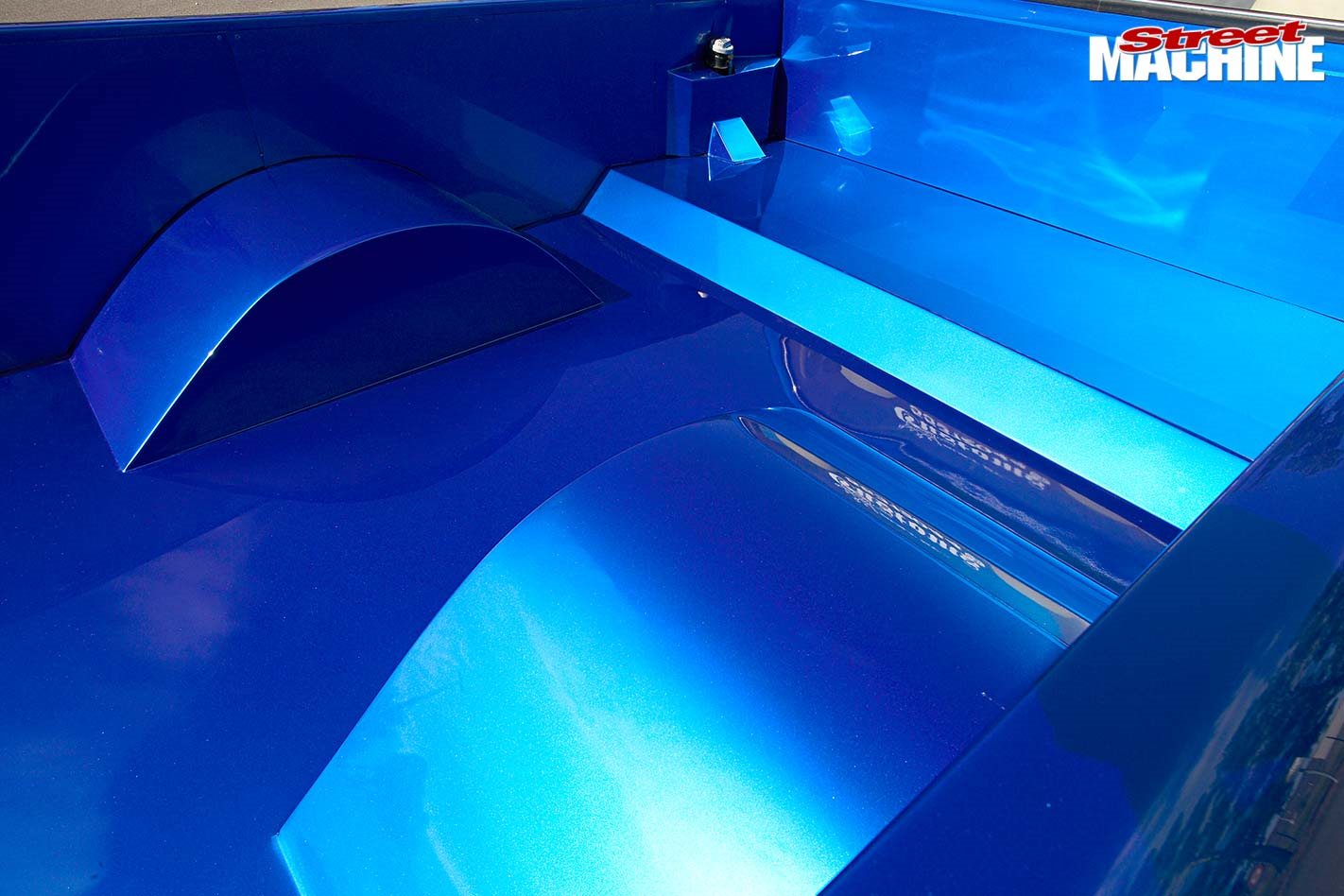 Besides being smoothed and tubbed, the pick-up bed sports this step in the front. It covers the XR8 fuel system that the boys dropped in as a complete unit

Troy used heavy-duty RTV Falcon ute front suspension struts, plus the diff from the wreck for the rear. That means the F-truck rolls on a five-stud pattern rather than the eight chunky lugs normally seen on F250s.

The chassis was notched to drop it down in the bum and the truck now sits about 180mm off the deck at the back while the front is a tad lower at 150mm.

The rear tub was a clapped-out piece that cost $50 but it’s been through the wringer since then, with a 180mm extension to fit the F250 chassis and the swage lines modified to match the cab. The guys also deleted the chunky rear bar and rolled the rear pan in addition to recessing the clear tail-lights. Both faces of the tailgate have been smoothed too. 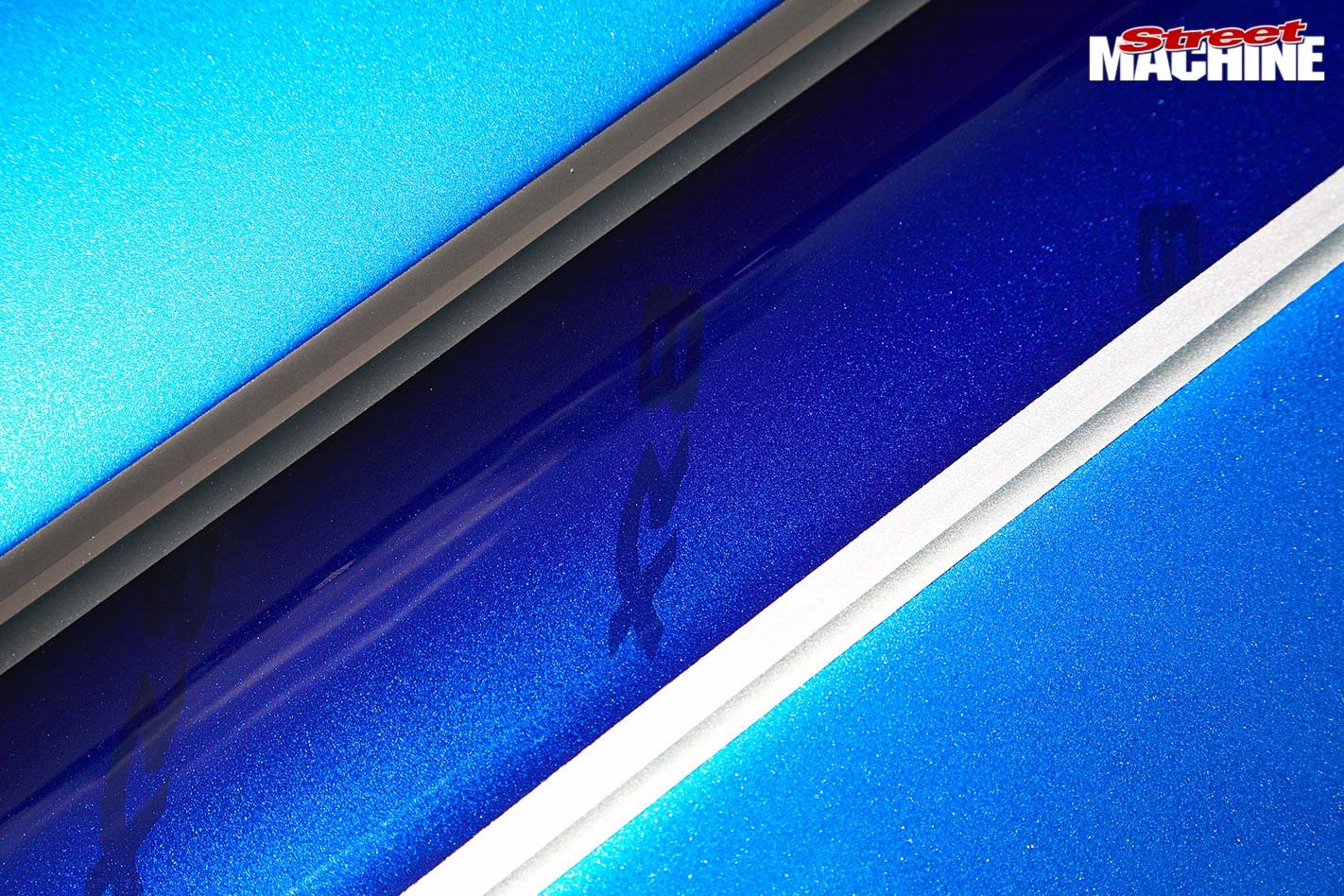 You’d have to be blind to miss the cab’s three-inch chop, and that extended bed really accentuates the truck’s long and low look.

“It was pretty straightforward,” Troy says of the chop. “The biggest nightmare was cutting the ’screen down.”

Ten windscreens were totalled before Troy found Tony at Windscreens O’Brien to do the job.

Open the doors with the remote poppers — there are no exterior handles — and you’ll recognise the BA XR8 interior. Except no BA we’ve ever seen has worn saffron suede over every surface — this has got to be the best trim ever seen in an old F-truck. 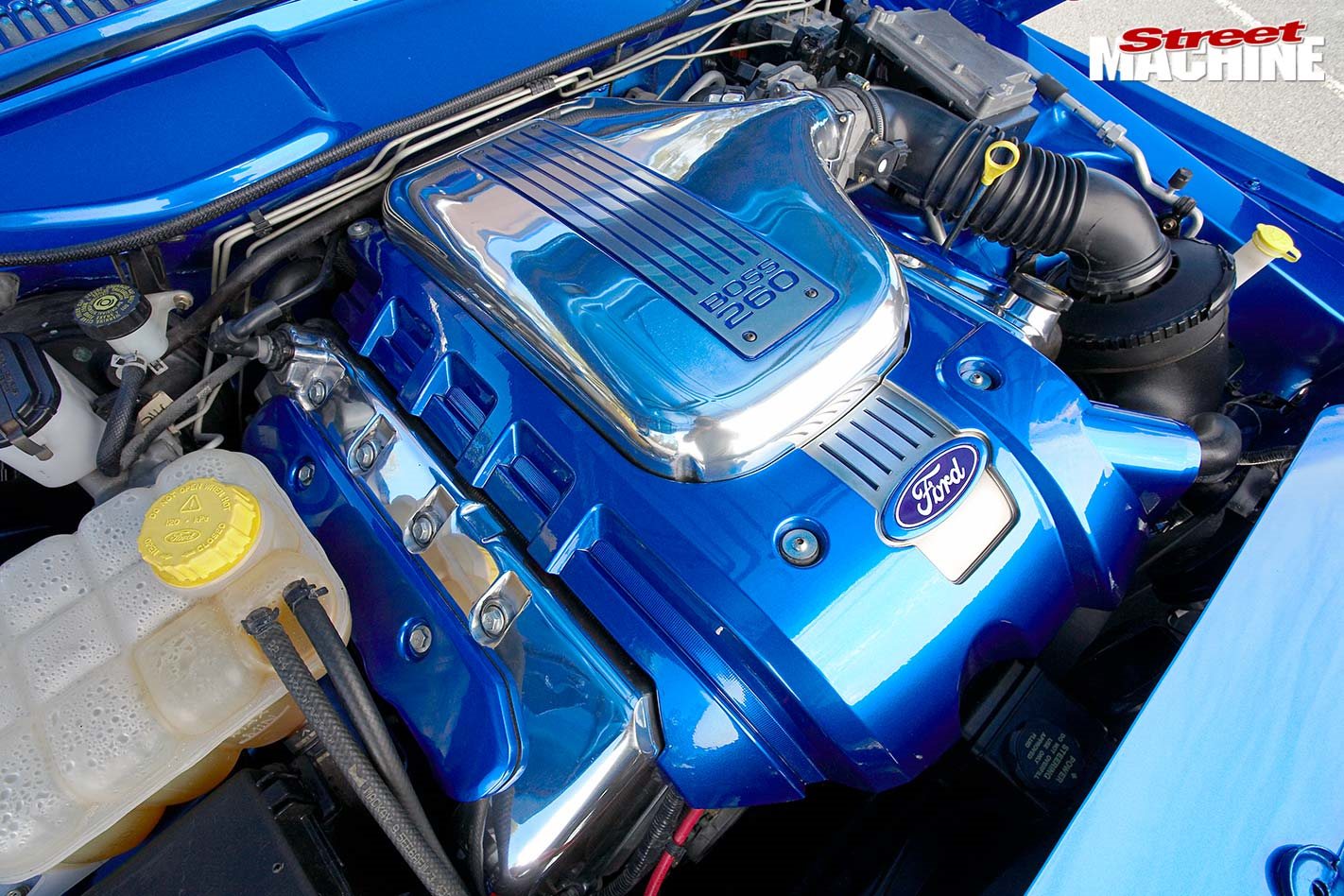 It’s like looking at a BA XR8 engine bay — except they’re never this good!

“There’s a fair amount of room inside,” Troy says of the F250 cab. That was handy because they carried over the power windows, air conditioning, stereo and almost everything else from the BA — the only thing missing is the steering wheel airbag. All the trim was done in-house at Gold Coast Customs.

“We do anything,” Troy says. “Any custom fabrication — muscle cars, hot rods, you name it, we’ll do it.”

For a little business promotion, the guys debuted the big blue beast at the Brisbane Hot Rod show where it caught the eye of head Summernats judge Owen Webb. 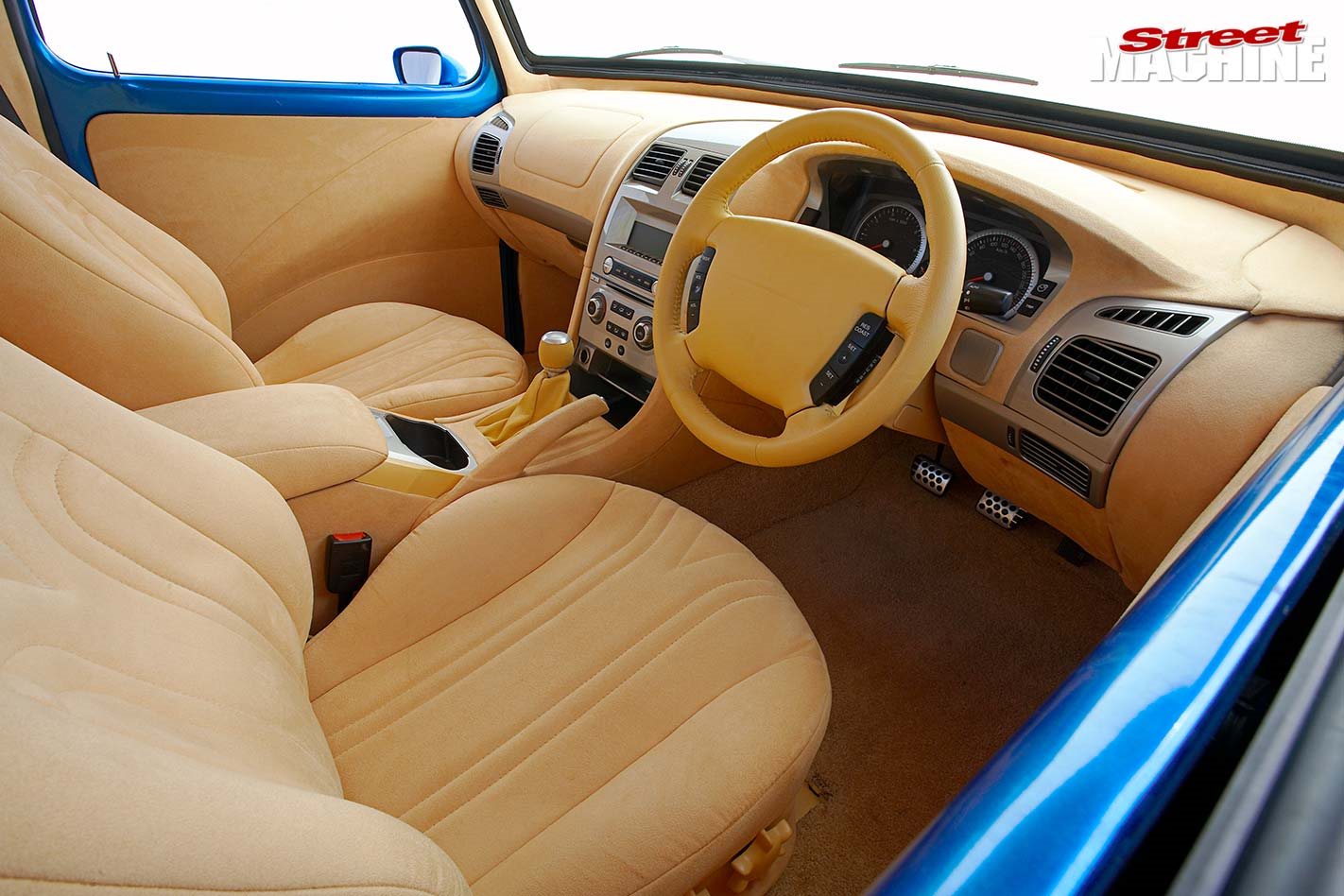 Not your average F-truck interior. By welding in the XR8 firewall the guys were able to use all the dash mounting points — 70mm pods were fitted to either end to close up the gaps to the doors

“That was better than any trophy,” Troy says. “He wanted it, and he brought people over to look at it.” If you catch Owen’s eye then you know you’ve got a winner.

“It drove as well as a BA XR8 ute,” Troy reckons. “The best thing about it was anyone could drive it. You could turn lock to lock without grabbing a guard.” 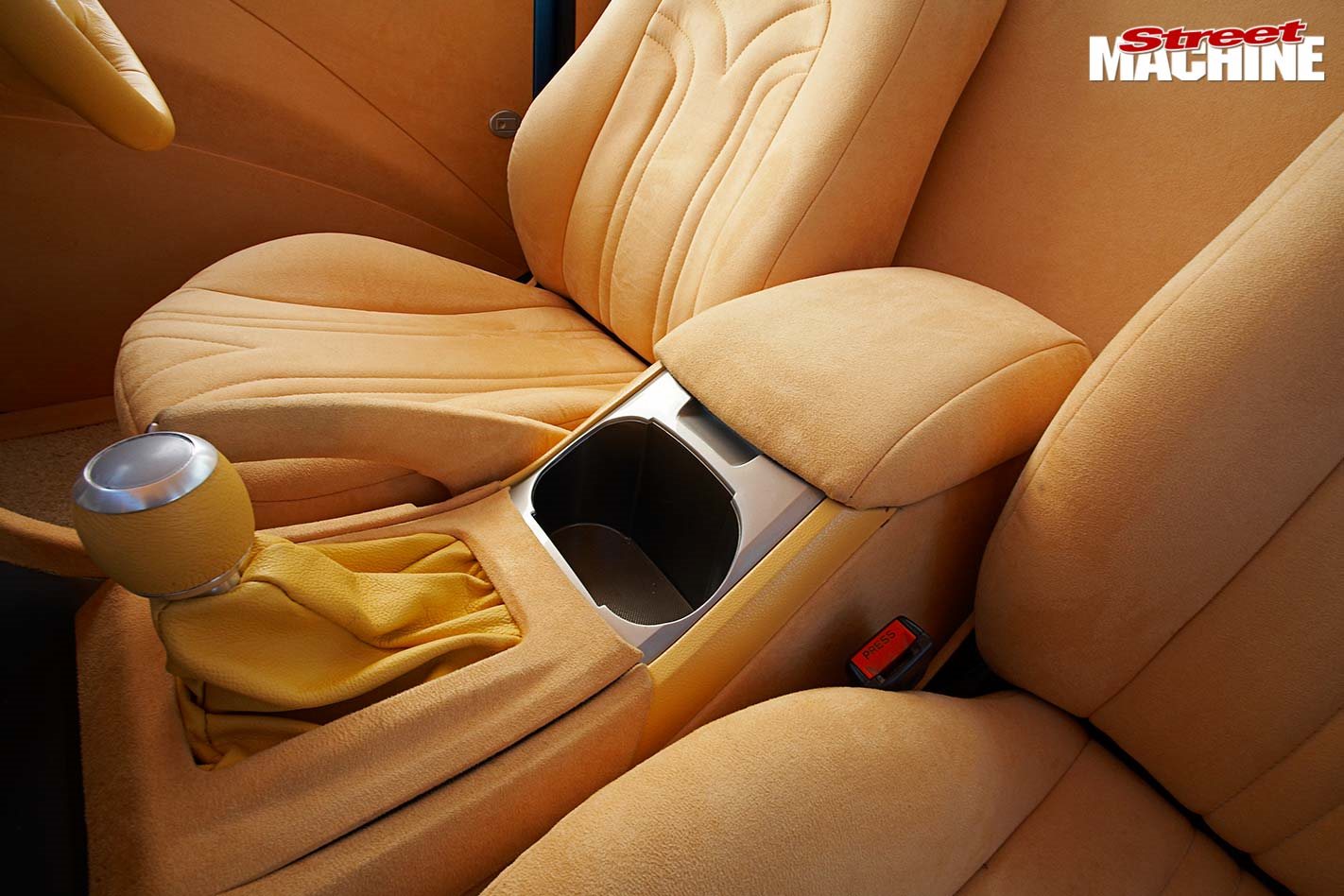 Troy sold the truck four days after our photoshoot because he’s got other plans on the go. But that’s not to say he wouldn’t build another F-truck like this.

“I’ll build one for someone else but they’ll have to pay a lot more than what I sold this one for.”