TONY Murr’s big block-powered XA GT coupe is a stunning example of all that we love about early-70s muscle cars. With over 800hp on tap, this car does exactly what Tony wanted it to do from the outset: fry the bags at 100km/h with five people on board.

But this story is about so much more than just a sleek muscle car loaded to the eyeballs with mumbo. Back in the 70s, Tony’s father built engines for John Goss and raced in the era of Moffat. It was the pinnacle of muscle car dominance in Aussie racing, but Tony’s dad walked away from it to raise a family.

With this in mind, Tony decided to surprise his dad by building him an XA coupe for his 70th birthday, just like Murr Sr had done back in the day. “It had to be an XA; it also had to be a 1973 model, as that is the year I was born, as well as my wife, and the year my dad was involved in racing,” Tony says. 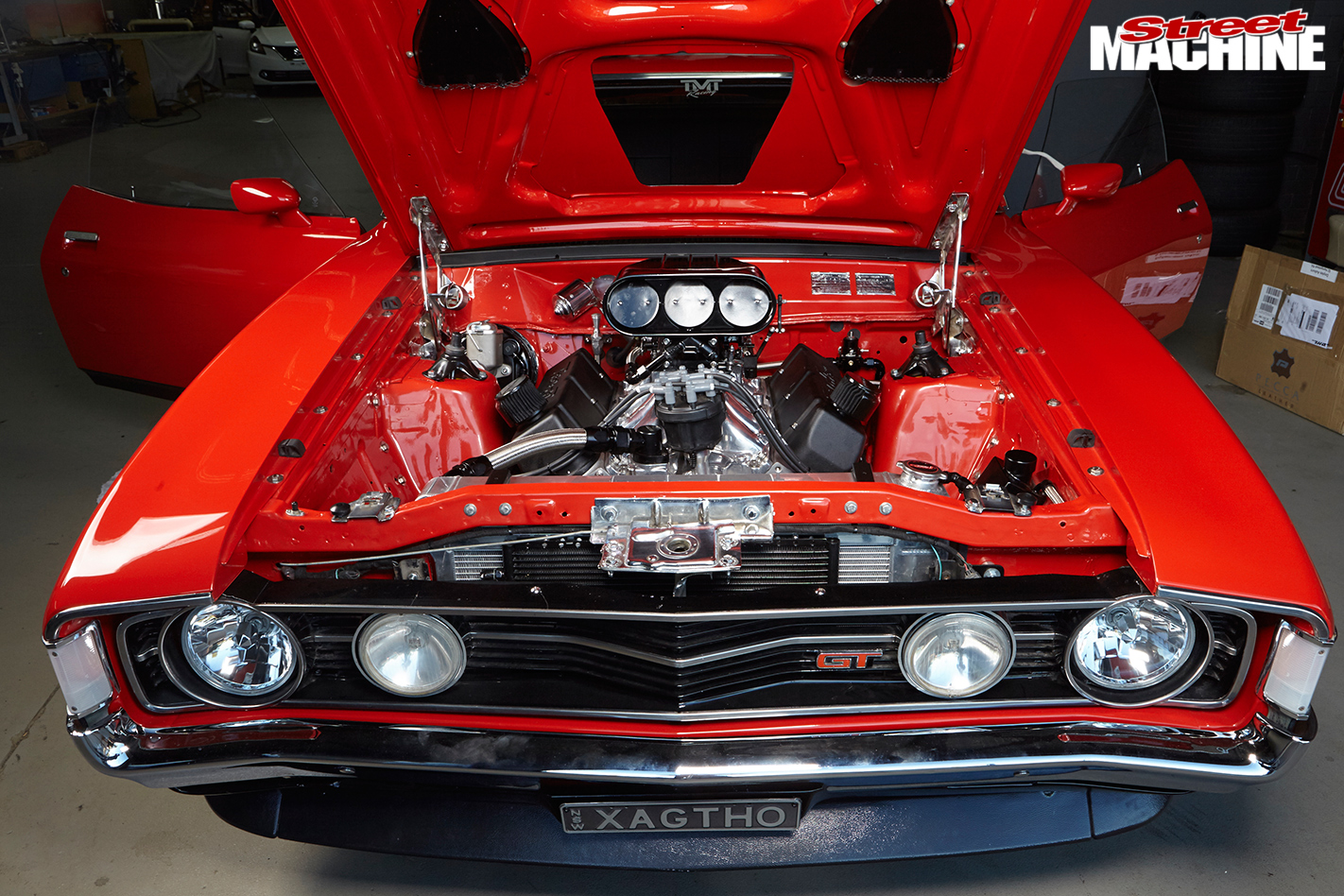 “To be honest I didn’t have the dollars to do it, but I found a car in Brisbane that was pretty good. I knew the guy who owned it before he died and he wouldn’t part with it. But when he died his kids in Sydney put it up for sale.”

The car was in good condition, but it wasn’t original. “It had that 80s look, with a Bathurst drop tank, flared guards, Cobra-style front end, shotgun scoop and painted bumper bars,” Tony says. “The interior was tragic, with velour everywhere from the seats to the dash and console; it also had a full rollcage.

“But it was a genuine GT and that was the look I wanted to get back to. It had 12-slotters and actually had a pretty serious 512ci big-block; that really appealed to me. I stripped the car and the shell was okay. There was no rust, which was a big thing for me.”

The car was then treated to a no-expense-spared build. The engine was built by Westend Performance, with a stock Ford block, Scat rotating assembly and 12:1 compression, topped with 325cfm Trick Flow heads and 1050 Dominator carby. Al’s Race Glides prepped the fully manualised C6 transmission, while Tony built a new shortened nine-inch diff with 35-spline gears and a Truetrac. Stock brakes were replaced with Wilwood items all ’round, and dressed with custom Simmons wheels.

The rear drop tank was replaced with a custom piece that still allowed the factory-style tailpipes to exit the new rear valance in the stock position. 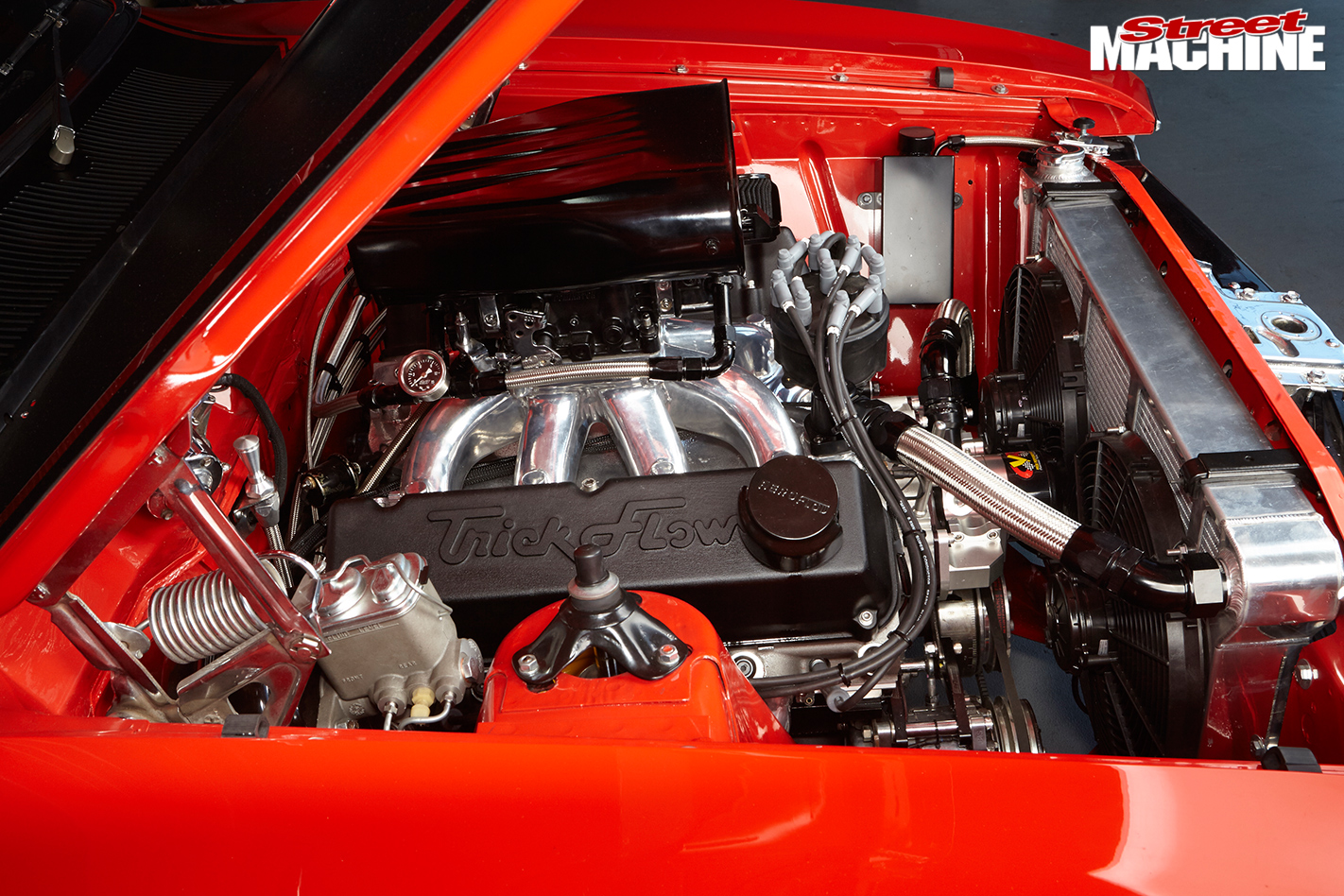 The whole interior was re-trimmed in leather, but still mimics the factory muscle car style of the 70s. The assortment of Auto Meter gauges that once dressed the scuttle panel have been repositioned down low in the car’s interior, while a user-friendly shifter will make it easy for John’s dad whether on street or strip.

A retro Vintage Air system was installed for comfortable summer cruising, and every piece of glass and rubber in the car has been replaced.

The stunning bodywork was completed by the boys at Callaghan Collision Centre in Taren Point. Tony has used them on other cars he owns, like his 1000hp blown and injected 1934 coupe.

With the car complete, it was finally time for the big reveal. “Dad didn’t know anything about the build of the car,” Tony says. “I had actually told him that I was taking him to a car show, as I had to collect a trophy on the ’34 coupe. It was the first show I had taken the car to and Chip Foose was there and awarded it Top Aussie Muscle Car – Dad was really stoked.”

“There’s no shortage of torque; with 900ft-lb you’re not missing anything at any pace,” Tony says. “I deliberately left tall gears in the car so it’s friendly to drive on the freeway, but nail it with five on board at 100 and it will leave long black lines.

“I know the car doesn’t look totally GT-original, but getting that motor under the hood without a bonnet scoop is a mission that I will have to address down the track. Ultimately I’d like to see it sitting on a set of Globes if I can get them tall enough.

“The build on the car has only taken 12 months, and I would like to thank Wayne Grima from Grima’s Garage in Silverdale; he was absolutely the right guy to make it all come together.”