HISTORY OF THE FORD FALCON XB

There are those who think the Ford Falcon XB would still sell well today. And they are Holden drivers

Ford refined the popular XA shape to create the XB. Without doubt, the coolest-ever Falcon

I OWNED an XB GS Fairmont. It was green, with 12-slots, and the factory 302 had been converted to dual-fuel. I sold it 15 years ago and to this day, I regret letting go of what, for many, was the Ford Falcon’s high-water mark.

The GT and GS scored a new bonnet with two large, recessed scoops. All XBs got new front bumper bars and the front indicators were moved under the bumper. The grille changed to a honeycomb design and on the GT the bumpers were colour coded

The XB was a refinement of the brilliantly styled XA, the car that reasserted Ford on the Australian market in sales and launched a long history of local design.

Even the base models struck a chord with the car-buying public, who helped boost production to a total of 220,765 XBs, outstripping XA sales by 68,156. This had much to do with the car’s long model run and a government incentive to knock $400 off the tax to combat the influx of Japanese models. 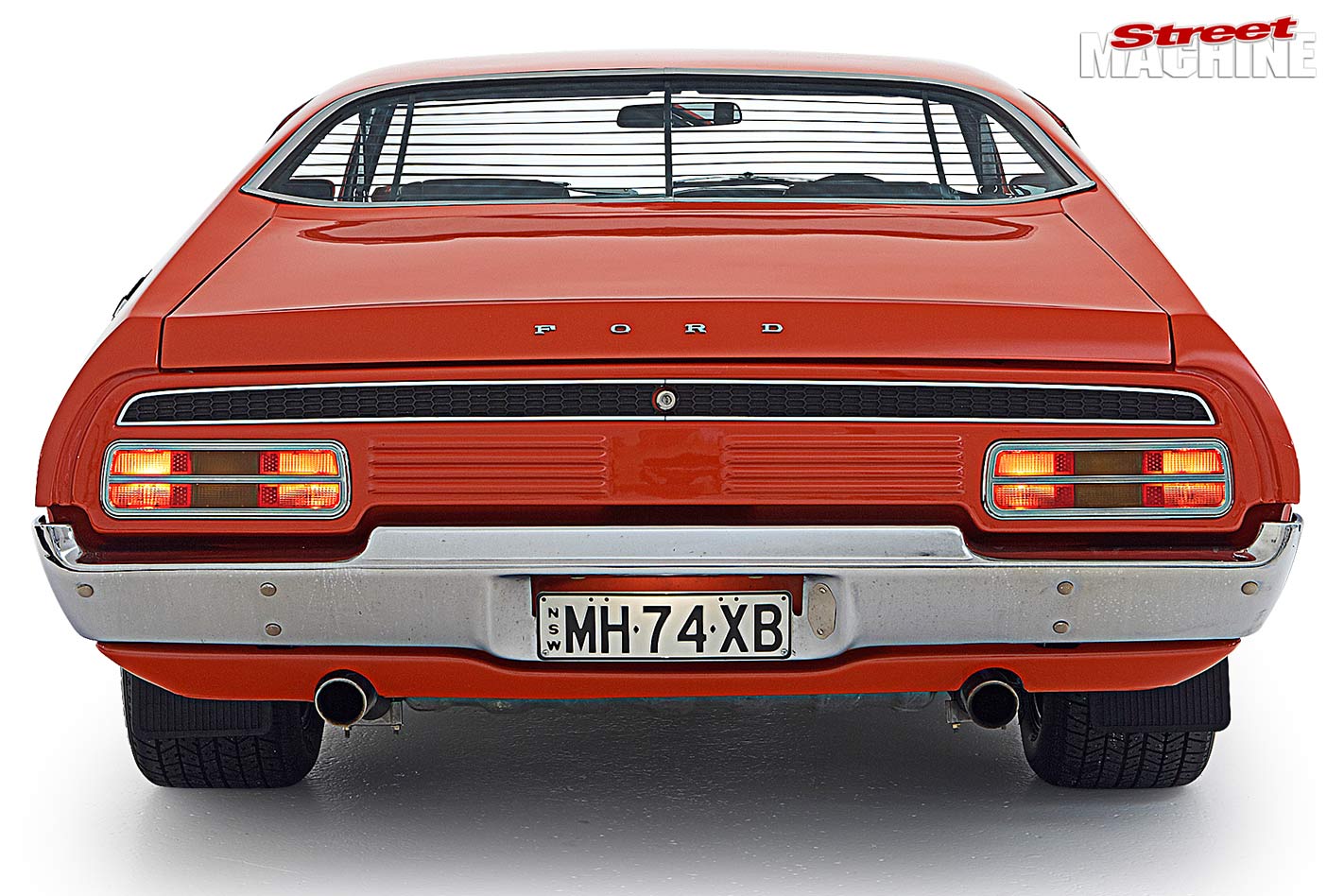 At the rear, the sedans scored wrap-around tail-lights, while the coupe lights moved to a flush-fitting two-piece design

Ford’s two millionth car was an XB but as that base-model Falcon rolled off the production line, it lost its newsworthiness when Gough Whitlam found himself searching Positions Vacant for a new job.

When the XB was launched in October 1973, it didn’t take a keen eye to realise you weren’t looking at an XA. The instruction from the top was to add extra Mustang DNA and the more aggressive new look was achieved thanks to the ‘power bulge’ and larger bonnet nostrils, plus the split honeycomb front grille that used moulded plastics rather than chrome strips for the first time, a precursor to the age of lightweight plastics. Larger wraparound tail-lights and a slightly altered bumper were the only rear end improvements. 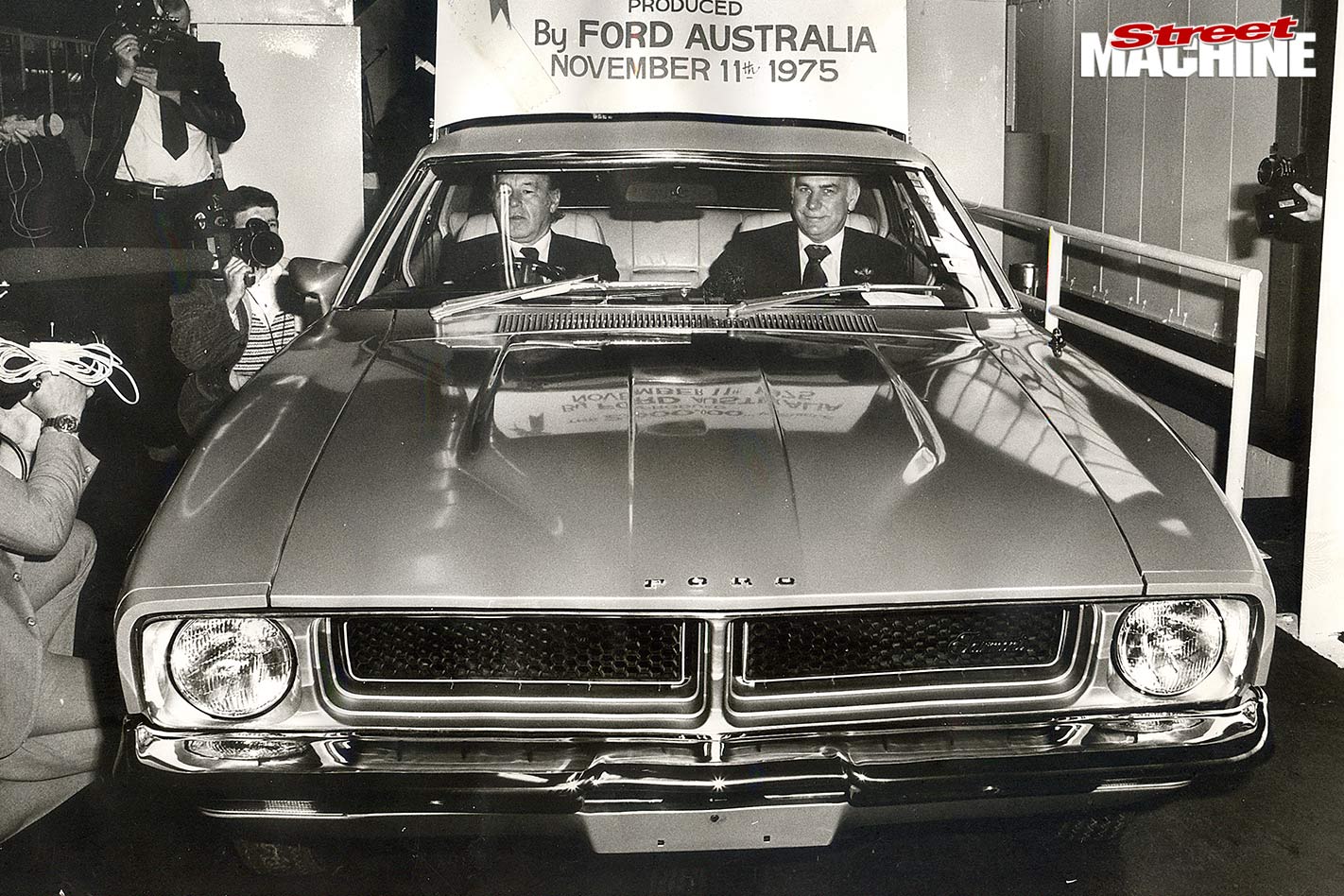 Nothing looked as masculine or purposeful as the front of a GS or GT XB, with the lowered stance mated to the driving lights and restyled bumper, and the brio was carried down the car’s gorgeous lines.

Mechanical improvements meant every model now came with standard front discs, while the Futura and Fairmont also had power assistance. The GT went a step further and got power-assisted discs all ’round — a feature offered as an option on all models. 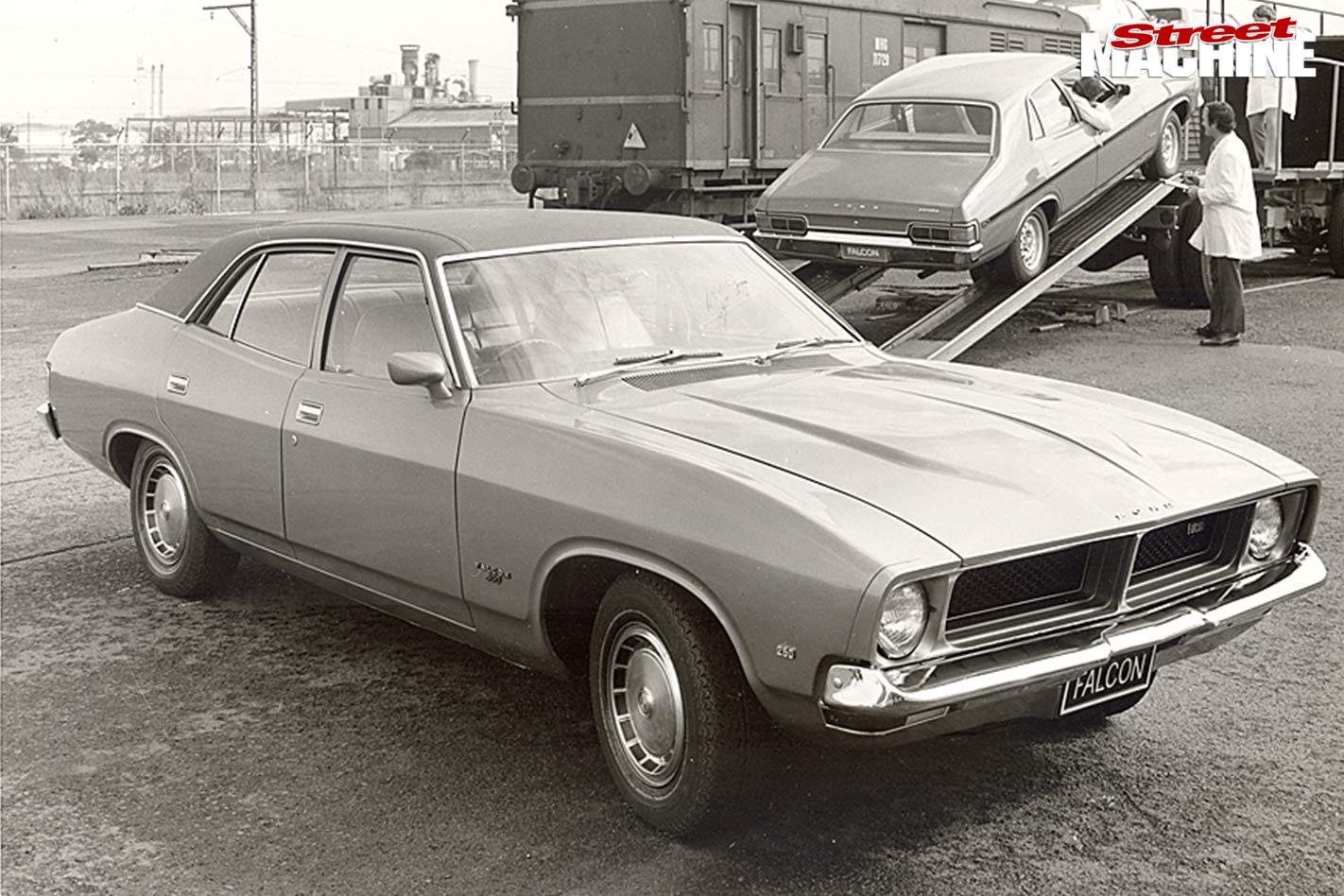 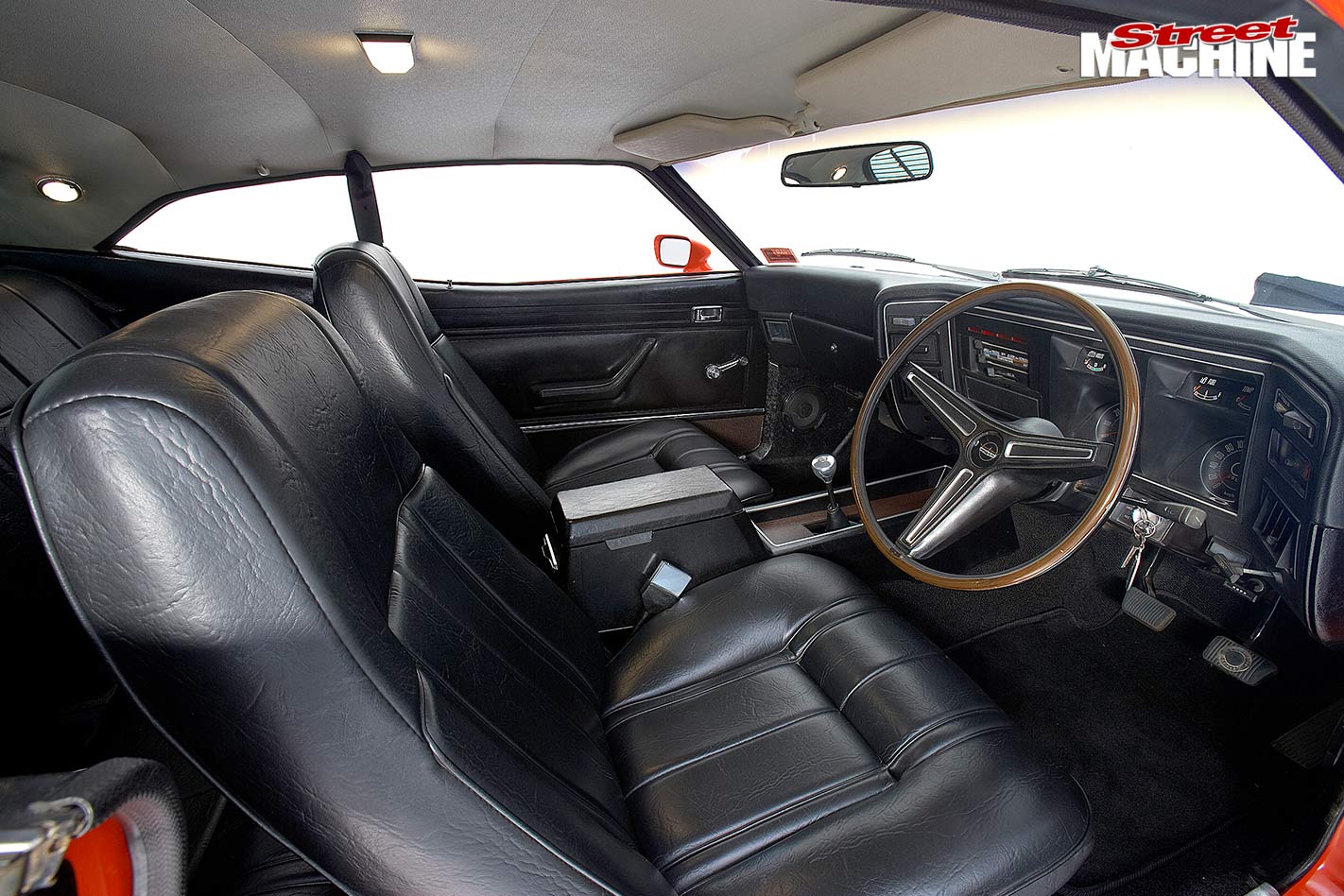 Inertia reel seatbelts debuted as standard issue, and Ford moved the high-beam switch off the floor and put it on the indicator stalk.

Again there were five engine options: the 3.2 and 4.1-litre sixes, then the two-barrel 4.9 and 5.7-litre bent eights, with a four-barrel exclusively for the GT. 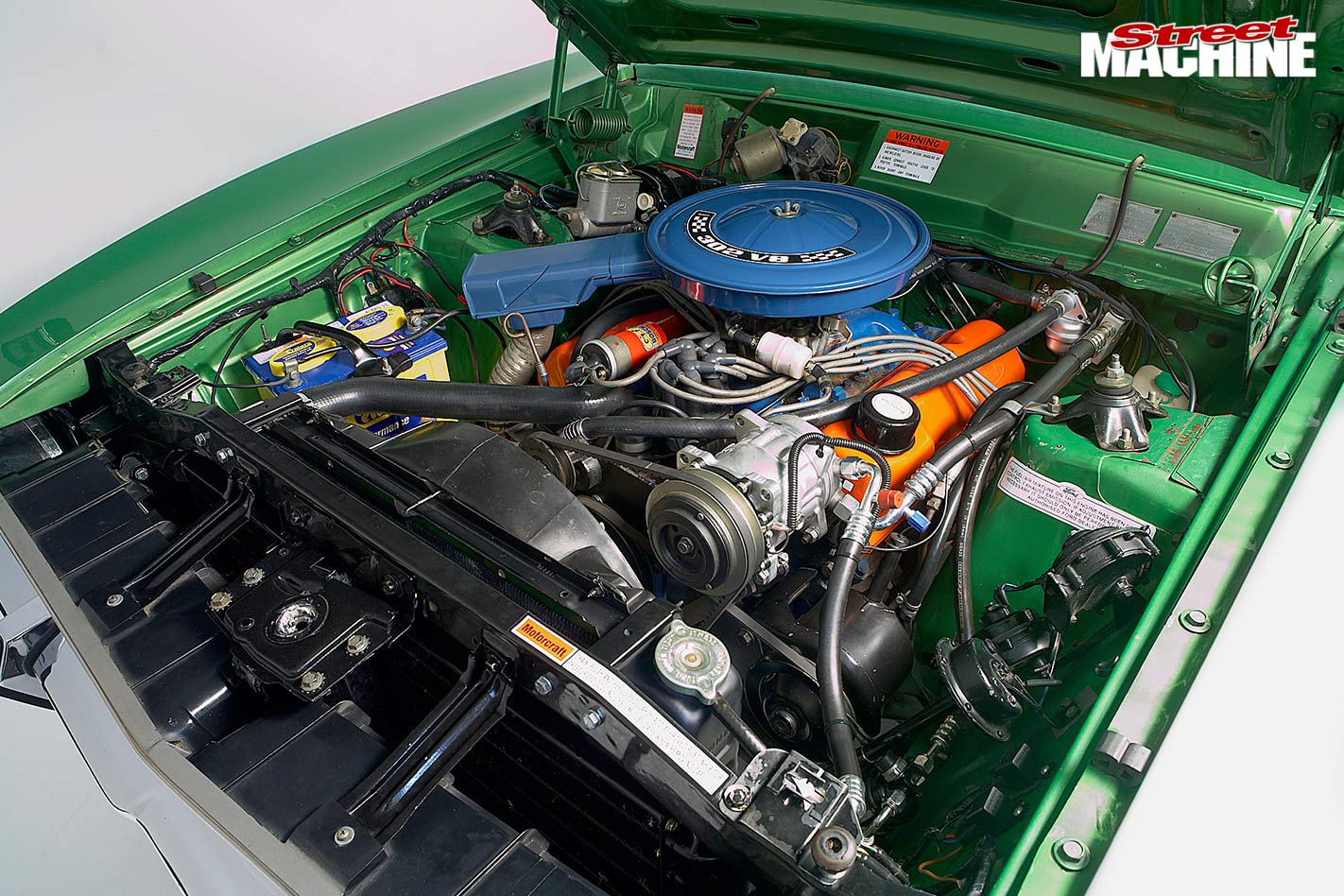 The transmissions were also unchanged, with the three-speed column-shift manual, Cruisomatic auto in column or T-bar, and four-on-the-floor manual.

The XB also ushered in Ford’s shaggin’ wagon — the GS-based Surferoo. The Surferoo lacked the wild visuals of Holden’s Sandman but it was far better kitted out inside, with a fitted fibreglass insert featuring moulded storage bins and ice box, curtains for privacy, a ‘luxurious’ foam mattress, wall-to-wall carpeting and fluorescent lights. “The ultimate Woody” the brochure claimed, and what it lacked in class, it made up for with increases in Australia’s population. 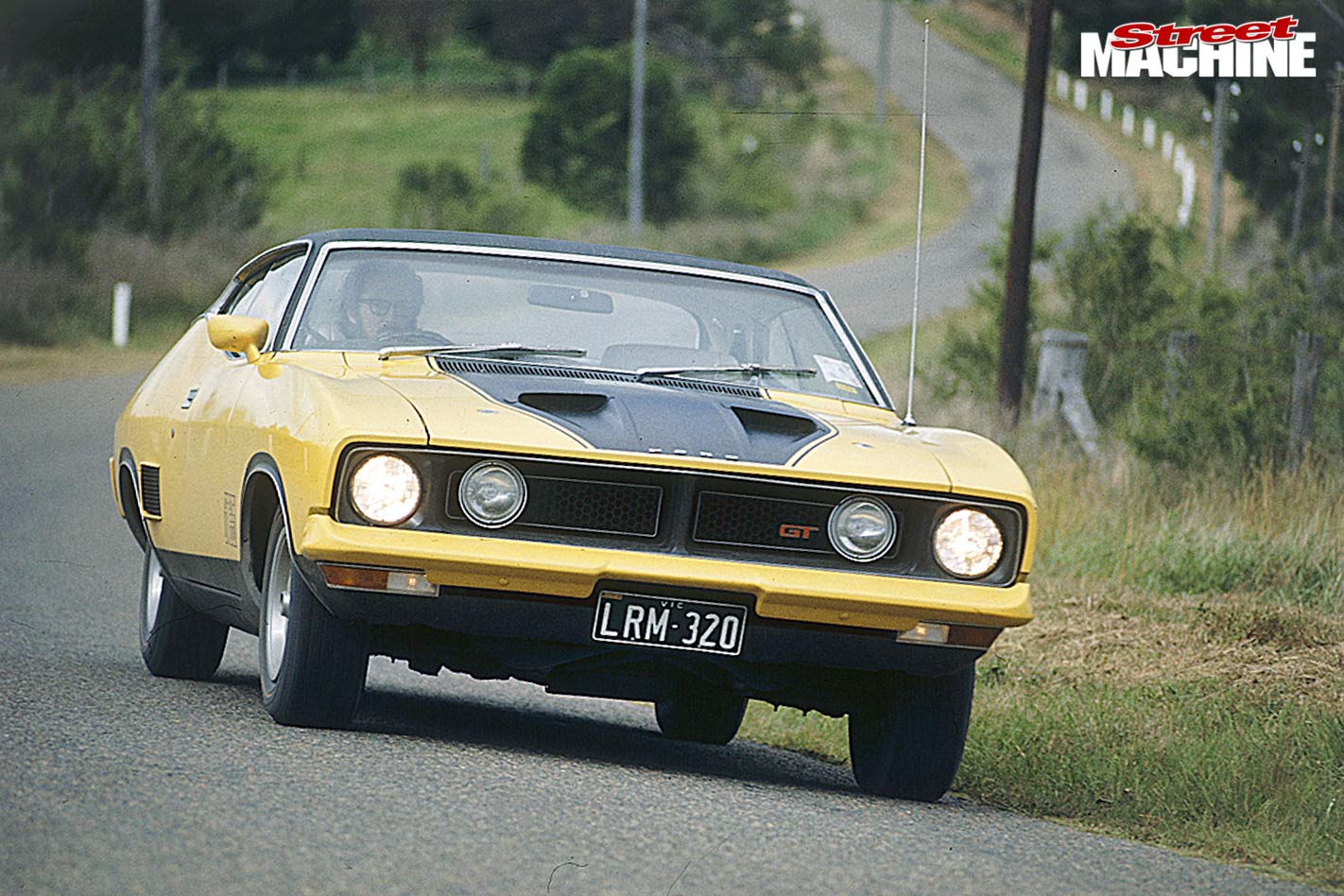 Two other modified commercials had more wholesome design briefs: the Overnighter featured a bulky camper shell that slid onto the ute, and the Surfsider panel van ran a hinged fibreglass roof that raised at one end to accommodate a youngster while Mum and Dad slept in the back.

Ford had the unexpected increase in family members covered, too. Its wagon was fitted with an optional jump-seat for the kids, so that with the armrest in the front folded up, it could seat eight. 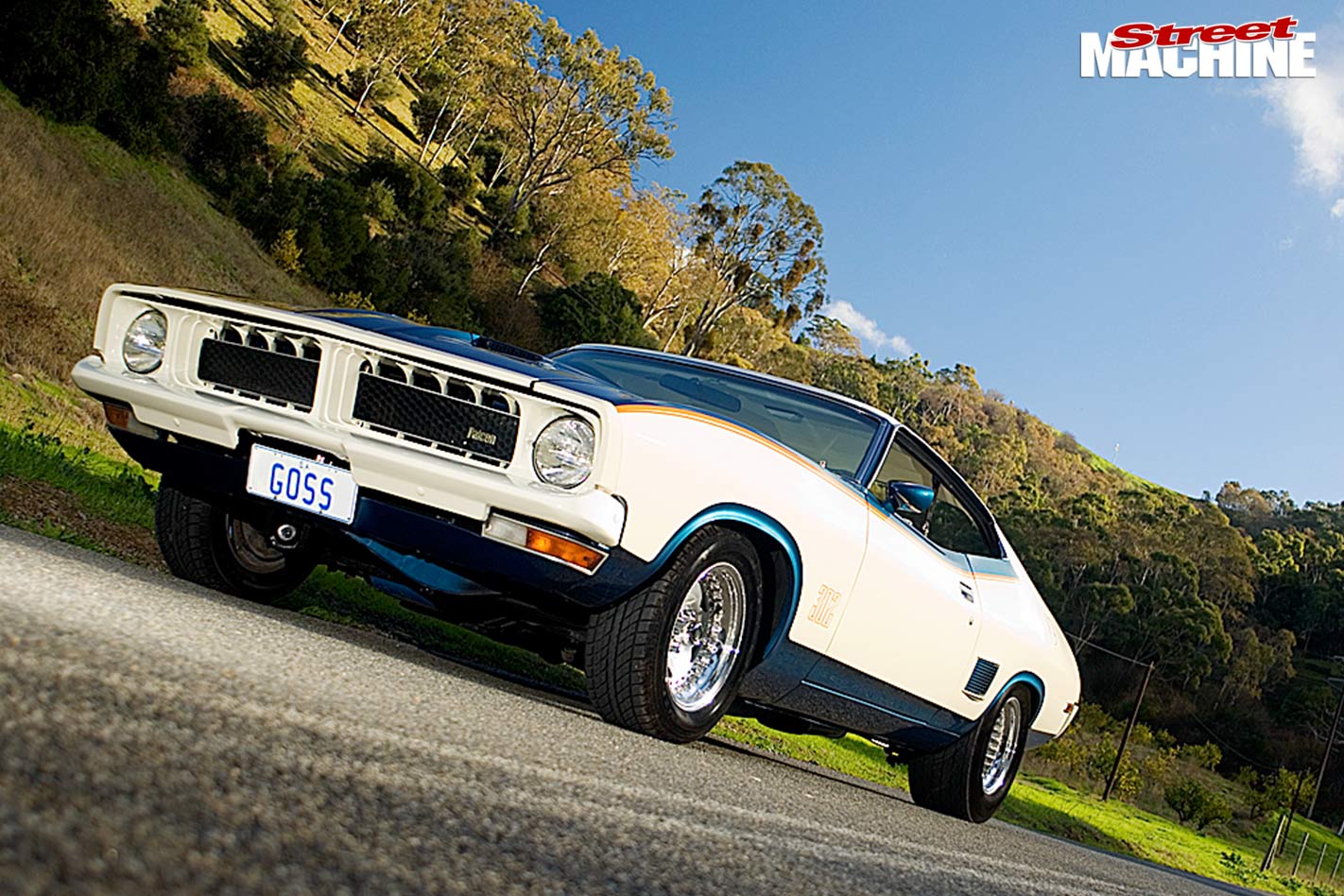 Like the XA Superbird, the XB John Goss Special was a limited run based on the Falcon 500 that featured lairy duco — either green and white or blue and white — but limited muscle, with the 302 being the only engine option. GT dash and tiller, 12-slotters and GT bonnet, side vents, bright white trim and sports suspension completed the picture

Meanwhile, it was taking a hit on the race track because the parent company pulled out of the scene, leaving Allan Moffat to run as a privateer. That was a challenge he met pretty damned well, thanks very much, taking out the 1976 and 1977 Touring Car Championships in an XB Hardtop.

Bathurst, however, was a different story. John Goss and Kevin Bartlett ran an XA Hardtop to victory in 1974 but there’d be no Falcon on top at the Great Race again until ’77, when Moffat and Colin Bond famously crossed the line side by side in XCs. 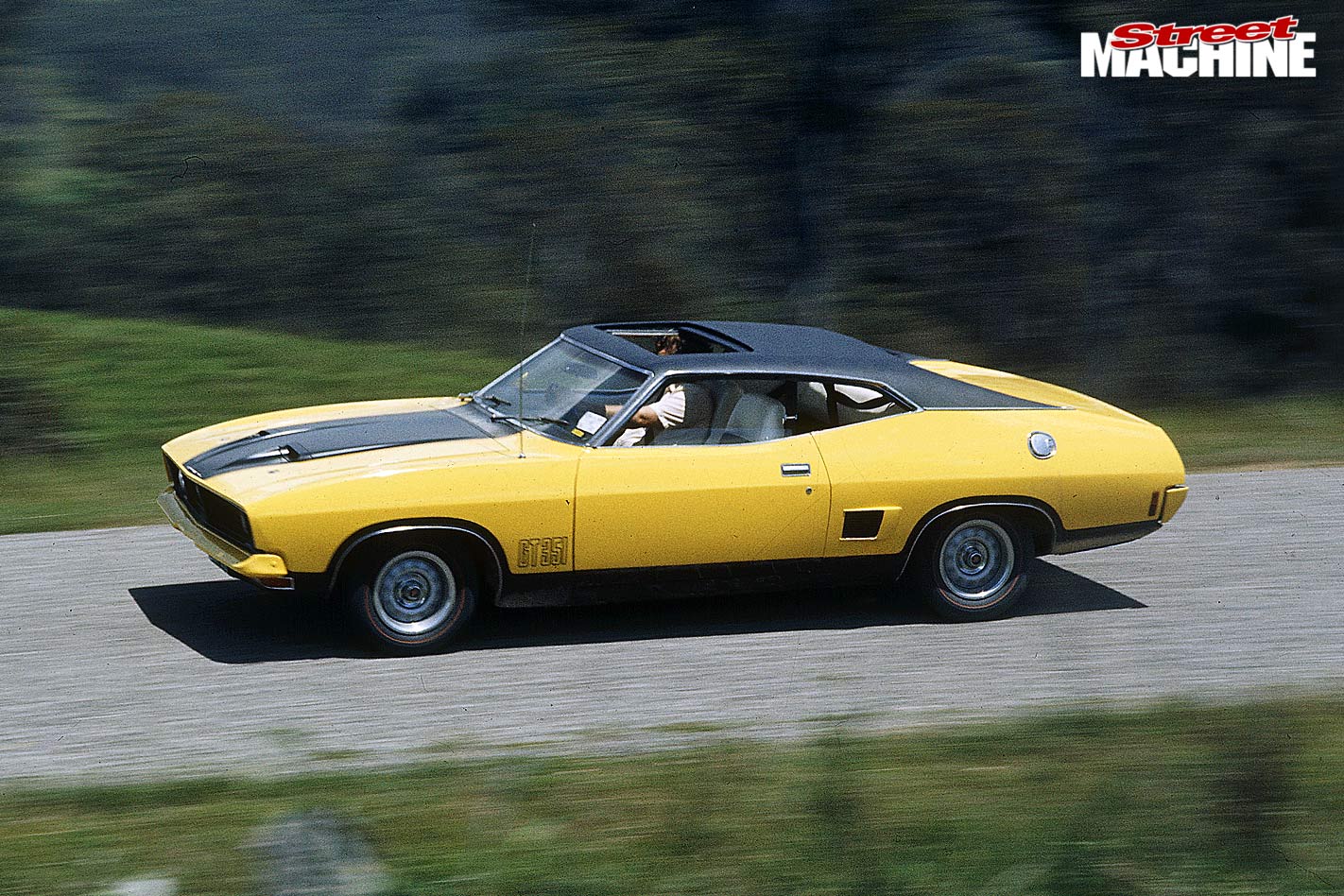 Sadly, the XB GT never got to taste victory on the mountain. The magnificently presented Brut 33 Allan Moffat effort qualified 15th in 1974 and retired with wheel bearing failure and other issues. The team nabbed second on the grid the next year but again failed to finish — an oil leak in the ’box then a broken control arm ending things. Moffat set pole in ’76 but saw out the XB’s Bathurst history with another DNF.

It didn’t stop Ford dressing up an XB Hardtop in two-tone paint and selling it as a John Goss Special, perhaps a bit cheeky considering the company was out of the racing scene at that stage. 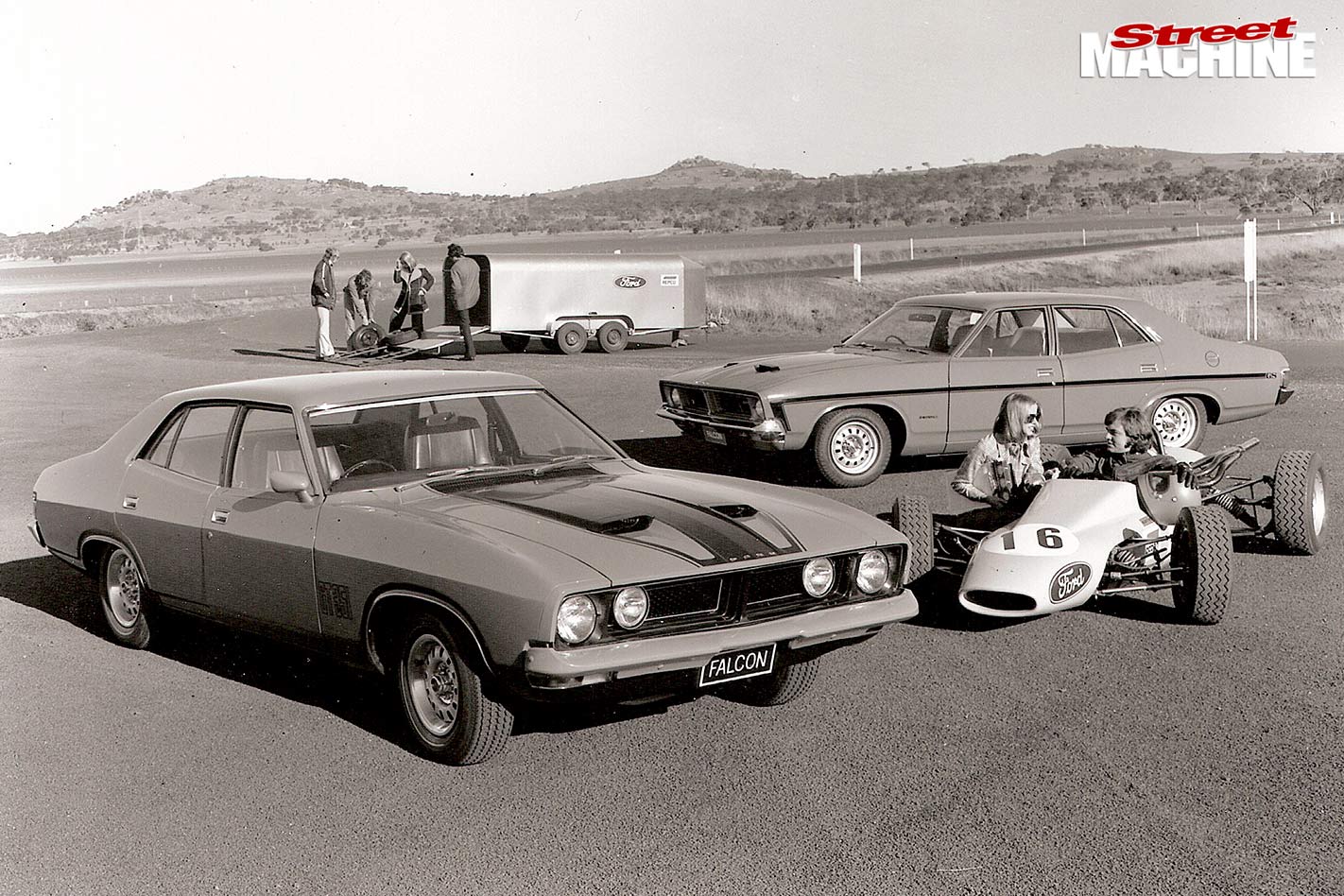 The JGSs sold well but by the end of the XB’s unusually long model run (thanks to the company scrambling to meet the very first ADR, which governed exhaust emissions, for its next launch) interest in the Hardtop was starting to flag.

The XB was also the swan song of the GT; the nameplate would not return until the EB GT was released in ’92 to mark the GT’s 25th anniversary. 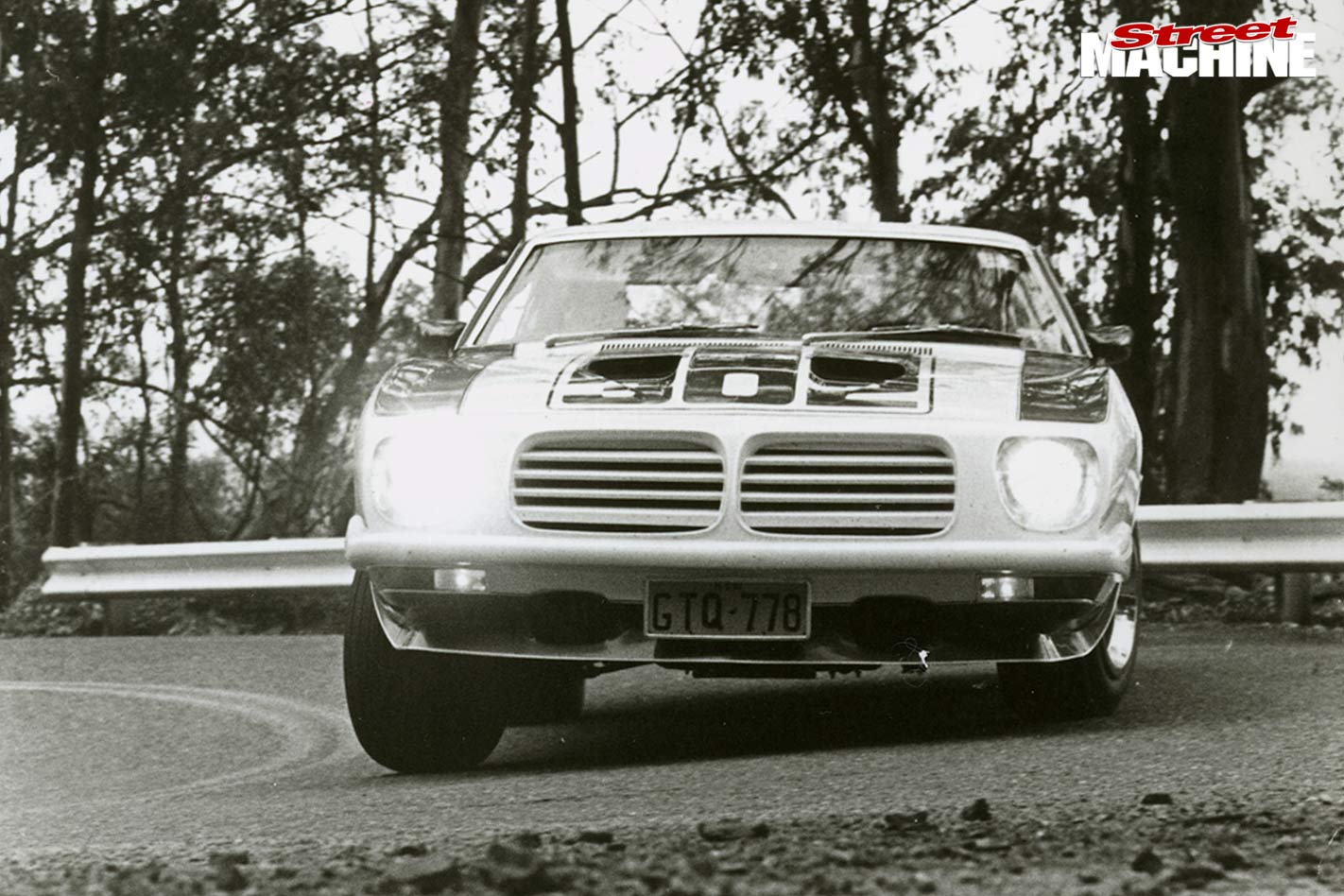 This special was based on the XB Hardtop and dreamed up by Sinclair Ford in Sydney. It had wild stripes and a gaping custom grille, but with just a 302 for power, it was largely a styling exercise and it failed to catch on

The XB GT was a fine looking car, squatting on lowered factory suspension, with ‘351’ emblazoned on the flanks, a variety of paint schemes, Bathurst Globes, three-spoke steering wheel and colour-matched bumpers. It still had plenty of go too, thanks to a 300hp, 750 Holley-equipped 351. Today, genuine matching-number examples can fetch more than $100,000, making it a true collectible. 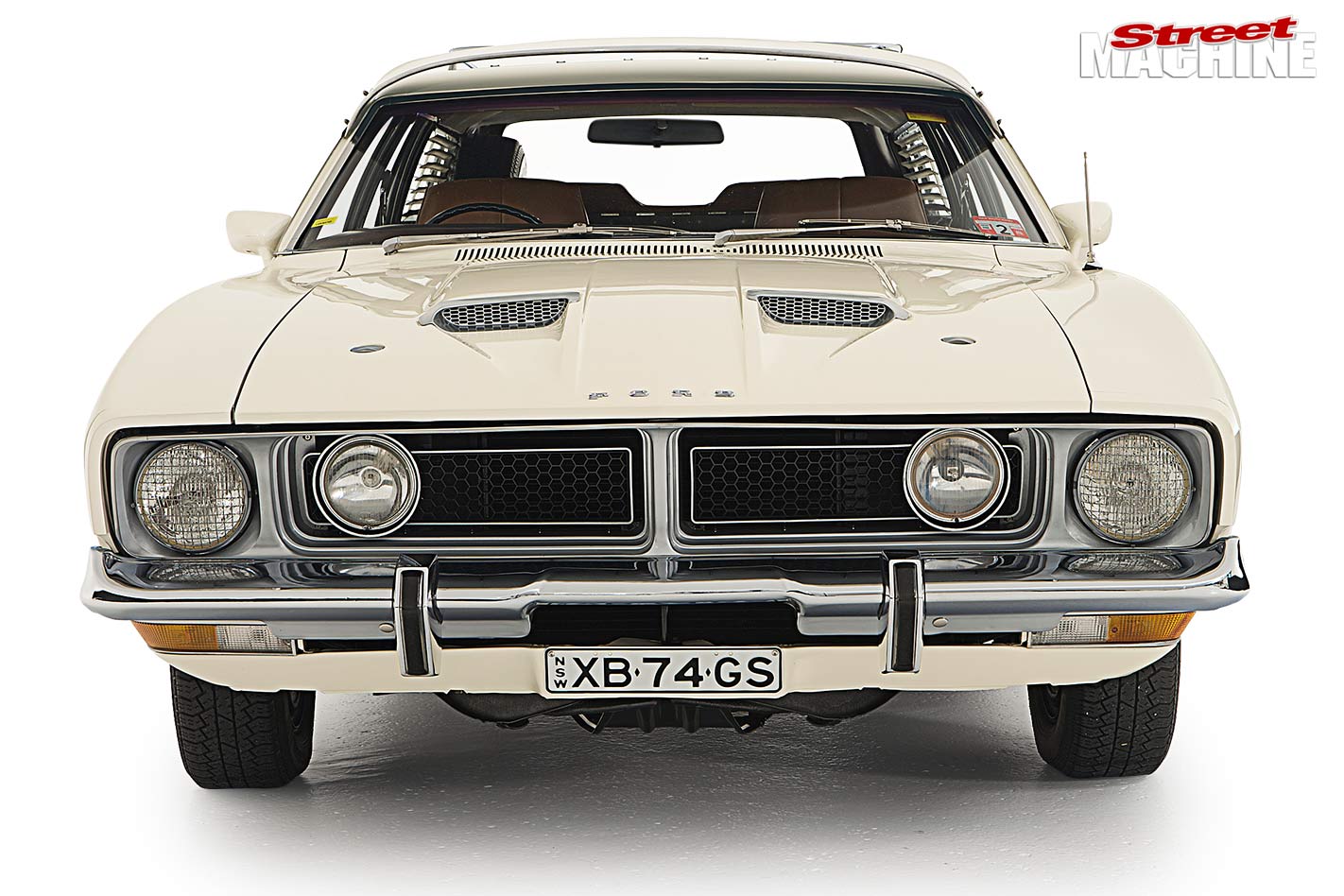 Bargain! The only way to describe this unique XB wagon that Denis bought from a panel beater who was trying to clear space in his shop after the previous owner wound up in gaol for nine years, for armed robbery.

“He asked me at a show if I wanted to have a look,” Denis says. “It was unbelievable — fully optioned — and he asked me to make an offer. I said: ‘Don’t do that to me — what do you want for it?’ and he said: ‘A thousand bucks.’ Bargain! 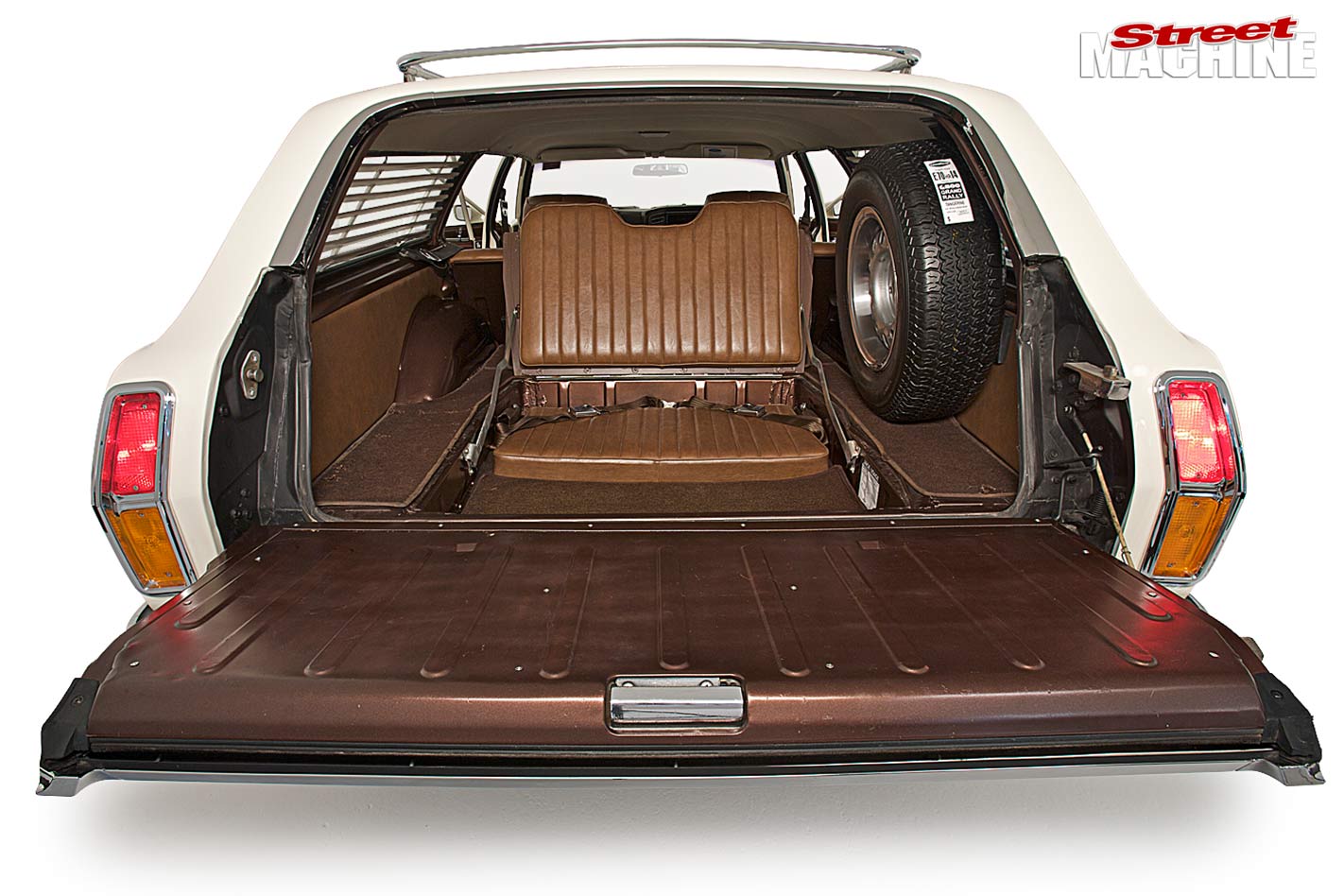 The reason for that is that this wagon is one of a kind. 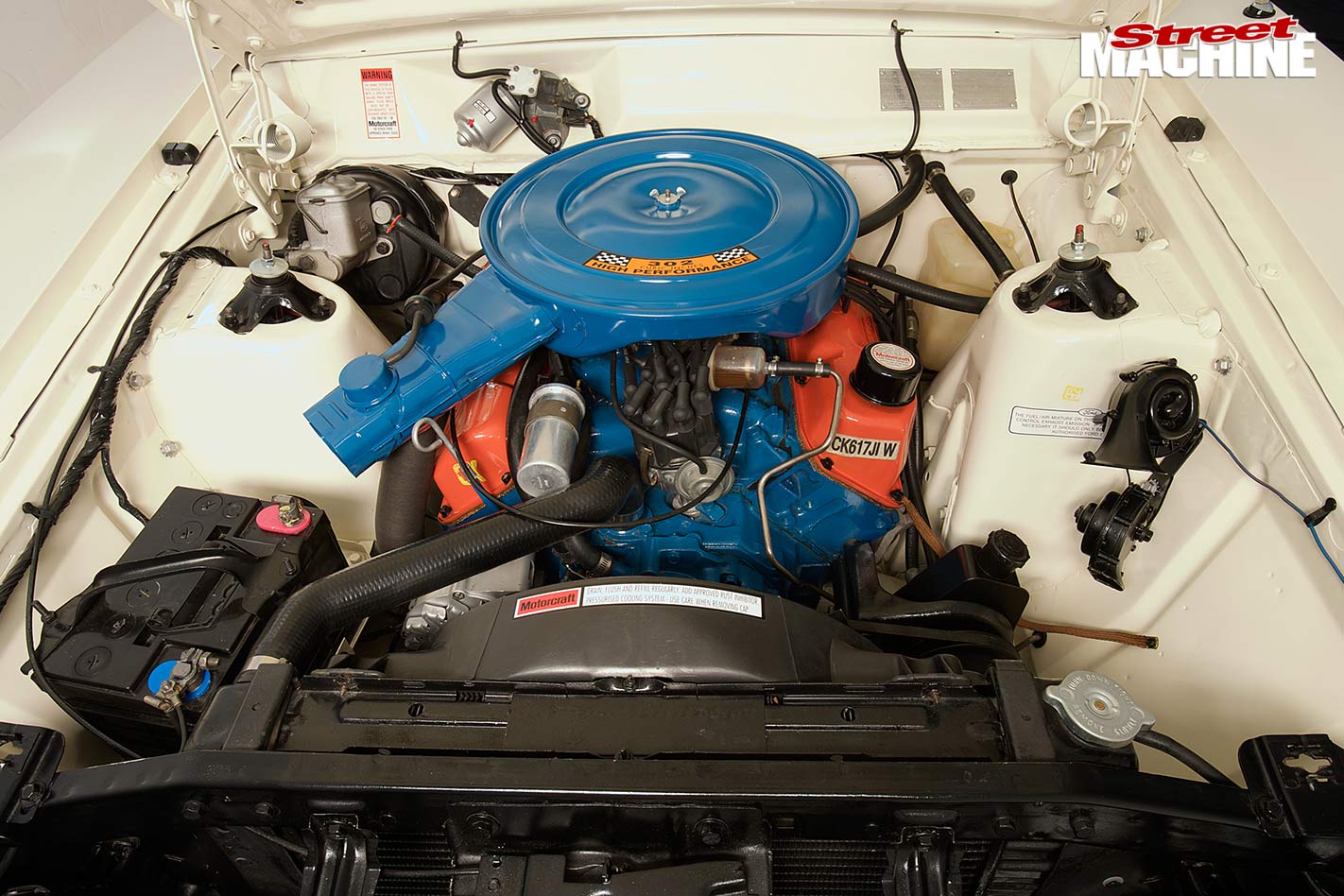 The only change Ford made to the engine line-up was to drop the grunty two-barrel-equipped 250 2V six, with the 200 and 250 sixes, and the 302, 351 2V and GT-spec 351 V8s the only options. The single-rail BorgWarner four-speed was a welcome addition among the transmission choices

When it went into the shop to repair damage suffered in a hail storm, Denis took the opportunity to give it a proper going over. He completely rebuilt it to get it ready for the NSW All Ford Day — a show he wouldn’t have gone to until he got his first Ford some years ago. 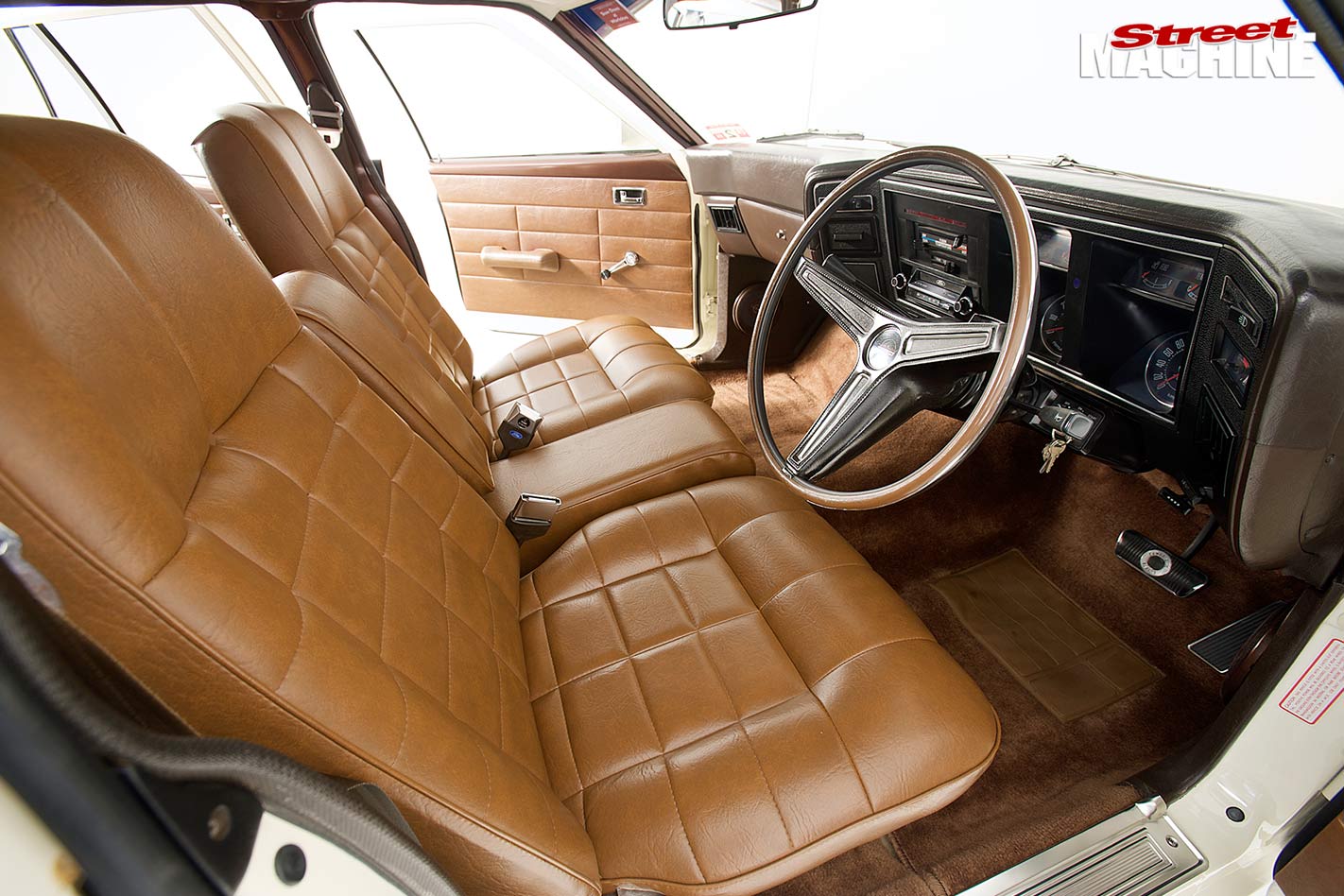 One of the great leaps forward with the XB was the introduction of a column-mounted high-beam flasher, something of a revolution for an Australian car of the day. Besides a move to metric instruments, the dash stayed largely as per the XA

“I used to be a Holden man but the first wife converted me — I got rid of her and held onto the Falcon!” [Laughs]. Since then the XB has won Top Wagon at the All Ford Day four times! 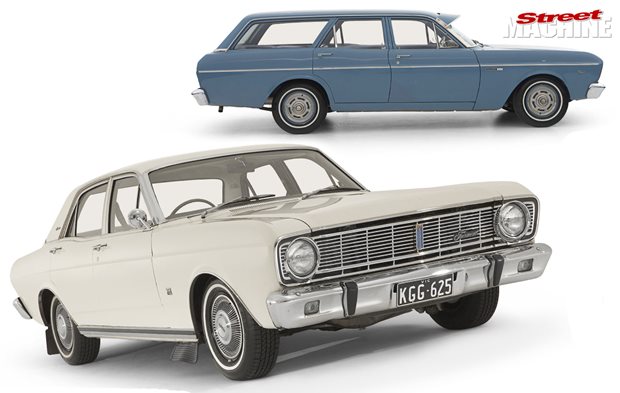 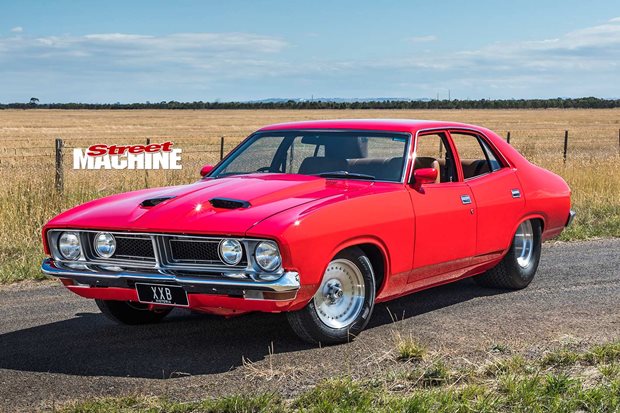