WHEN Allan Moffat and Colin Bond took Ford’s XC Falcon Cobra to a one-two formation finish in the 1977 Bathurst enduro, they achieved two things. First they helped Ford sell off the last of its coupe shells that were laying about the factory, and second they created a mountain legend that struck a chord with Perth teenager Grenville Marklew. 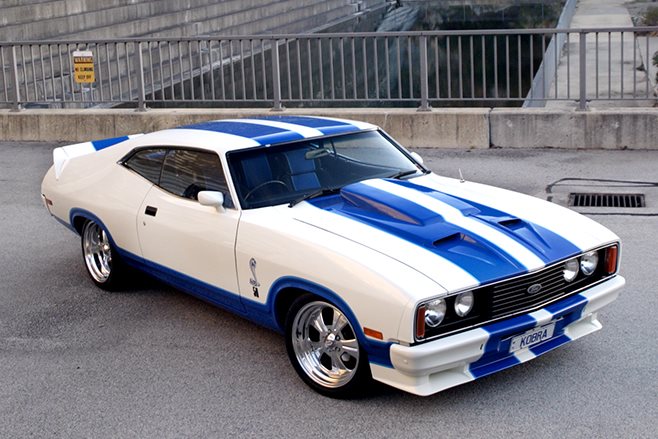 However, it would be many years before fate would step in and bring he and the mighty Cobra together. A mate of his was checking out a scale model Cobra in a Perth shop one day last year when the guy standing next to him told him a friend had a “real” Cobra Falcon. Marklew’s mate told him he had a mate who wanted to own one and the pair exchanged phone numbers. 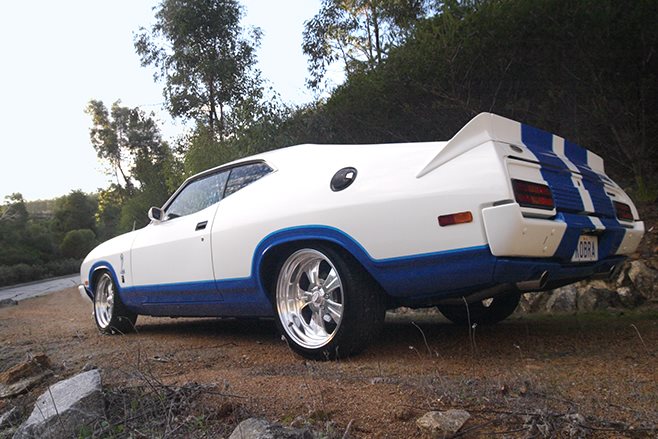 Marklew called the owner to find out more and discovered it had a 302 cube engine and not the 351 he really wanted. It was a deal breaker, but the problem was he couldn’t get it out of his mind. He kept babbling on about it until his wife, Alex, eventually cracked and told him to “just buy it” because she “wasn’t going to listen to his crap for another 27 years”. 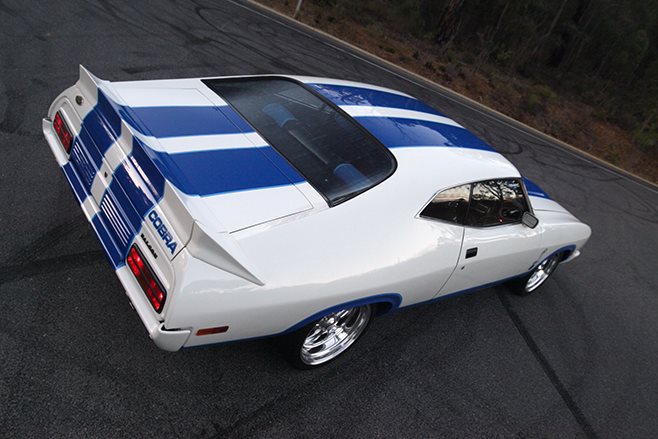 So he flew to Albany on a deal to buy sight unseen, unless the owner wasn’t true to his description, and nearly got back on the plane when he saw it. It just didn’t look right: Simmons wheels had replaced the original Globe alloys, it had some ugly trim strips around the wheel arches, the seats were covered in sheep skin, there were bits of carpet over the floor, the badges on the front guards read 5.8 instead of 4.9, and it had the Bathurst bonnet scoop. 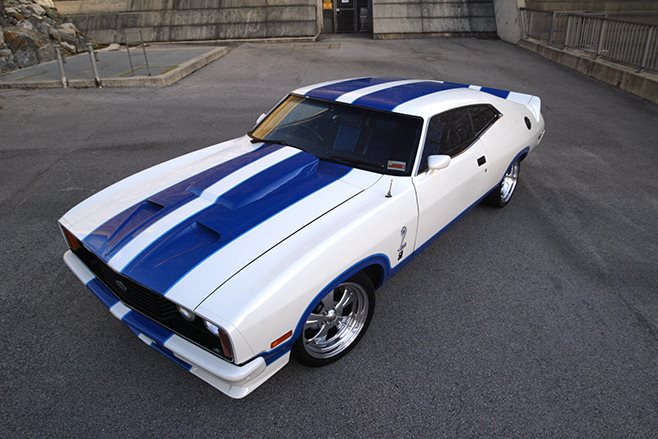 But the more he looked the more he liked it. There was no rust evident, the body was straight and unblemished, and the interior trim under the sheep skin and carpet was as good as the day it left the showroom. A close inspection suggested the scoop had been fitted at the factory and that the bonnet was original. Marklew reckons it was ordered that way by the dealer, who also probably fitted the 5.8 badges, to make it more appealing on the lot. 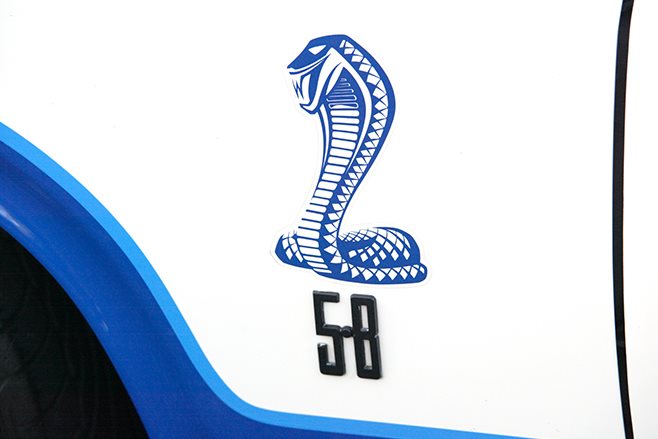 Once back in Perth he quickly stripped off the wheel arch mouldings, and flung the wheels, replacing them with some Boyd Coddington rims and rubber from the hot XC sedan he also owns. The exhaust was a mess even though it had just been renewed so that was junked and replaced by his own concoction of Tri-Y headers, MagnaFlow mufflers and 2.5-inch stainless dual system. The original springs and shocks were replaced by some Lovells lowered springs and Koni adjustable shocks which got it sitting at the right ride height. 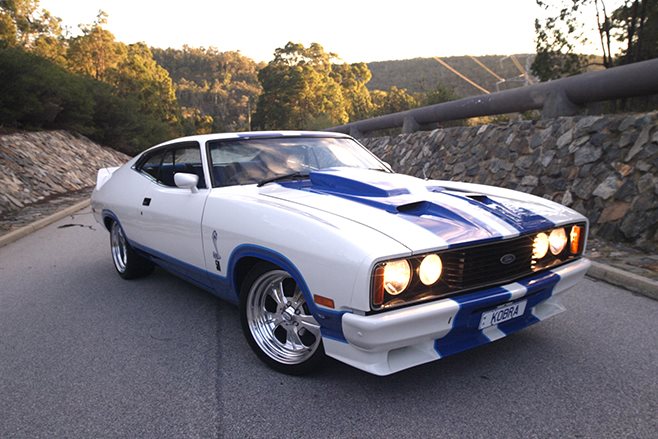 And that was the extent of the modifications, with the only other work minor touch ups. The paint on the sills was a little thin so he had them repainted, the bumpers and front spoiler were also cleaned up, and a scratch on the rear quarter was repaired. While they were at it he also had the rear window removed to check for rust in the known trouble spot. He’s thankful he did because the dreaded tin worm was just starting to have an impact. That was repaired and happily the rear window and original factory seal was in such good shape they were able to be refitted, so he didn’t have to use inferior repro parts.

“They never fit right, and you can always tell they’re not the factory original parts,” he says. 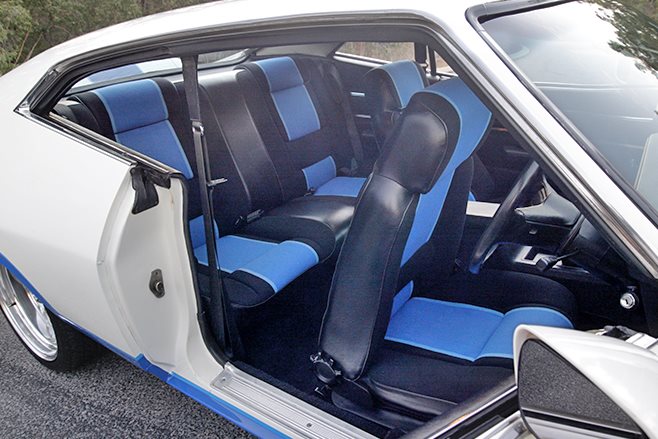 The original trim was factory fresh and didn’t need touching, so too with the boot, which was untouched and still had the original spare Globe alloy and red wall tyre fitted.

He hid a modern system to belt out a more contemporary sound, but kept the original factory radio to satisfy his desire to keep it as close to stock as possible.

“You only get one shot at originality,” he says. There was never a thought of having it restored, that would have taken away the things that made it such a great car. 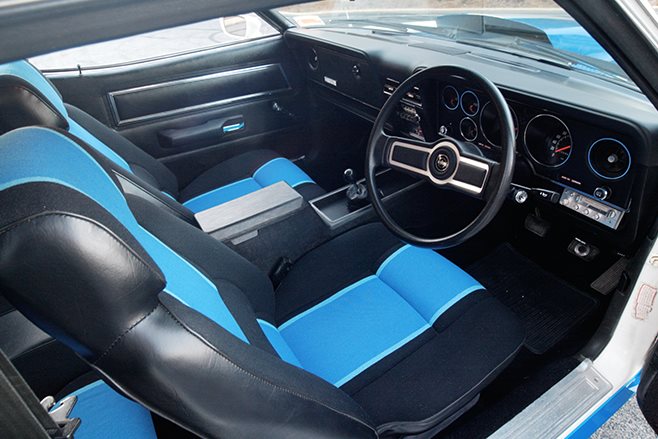 FAST TO THE LAST

The XC Cobra was a smart piece of marketing conceived by Edsel Ford II, then the assistant managing director at Broadmeadows, to sell the last remaining coupe body shells. They built 400 Cobras in total and released them in celebration of the great one-two win at Bathurst in 1977. Half of them had the 302ci V8, the other half had 351 Clevelands.

There was a choice of four-speed manual or auto ’boxes, they all had a limited-slip diff, four-wheel discs, dual exhaust, and a laminated screen, all regular production options. 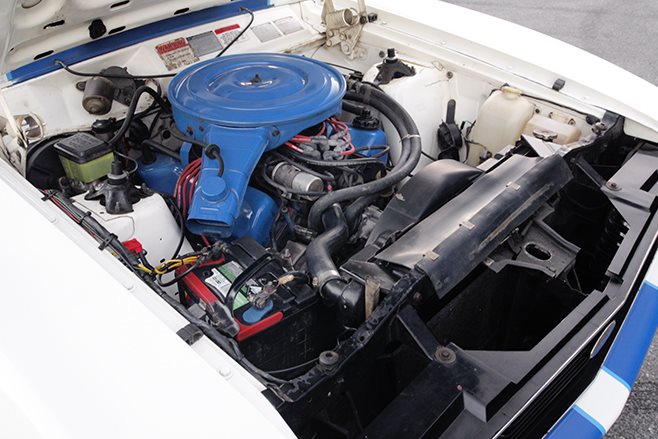 They were painted Snow White with wide dark blue stripes edged with a fine light blue stripe down the centre of the car in the style used by Carroll Shelby on his Mustangs.

The exterior was then finished off with matching painted bumpers, a front spoiler and rear deck lid wing, while the blue theme was carried down the sills and over the wheel arches and Cobra decals were added to the front guards and boot lid.

Globe alloys were all the rage in the mid-70s and Ford fitted 15x7s to it and ran ER70H15 fabric radials. Inside the trim was black, but bright blue inserts brightened it up heaps. 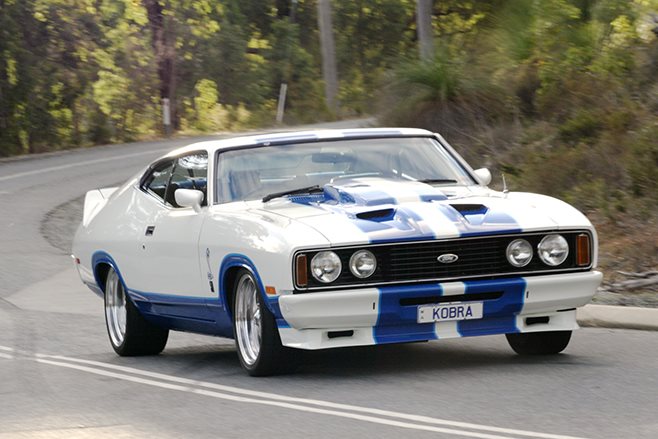 The most desirable of the Cobras were the 30 Bathurst models which were tricked up for the teams to use at Mount Panorama. The rear wheel arches were enlarged, the spring towers were reinforced, the second suspension crossmember was reinforced, strut braces were added, a heavy-duty radiator and electric fan kit were fitted, likewise a transmission oil cooler, and a fibreglass front spoiler was used in place of the plastic one used on the other cars, and a large bonnet scoop was added. Inside the front seats were replaced by Scheel buckets.

The Cobras were the last of the line of Falcon coupes and unlike the Monaro, went out flying high.