WE’VE all been stiffed on a deal over the years – it’s an unfortunate side effect of buying used cars and parts. That freshly rebuilt engine turns out to be full of second-hand parts, or that killer transmission needs all the clutches replaced, or that fresh bare-metal respray hides a cancerous body full of bog and chicken wire. We’ve seen them all, but Chris Wright got taken for a good old ride when he traded his mint VQ Caprice over a decade ago for an XW project car that looked full of promise. 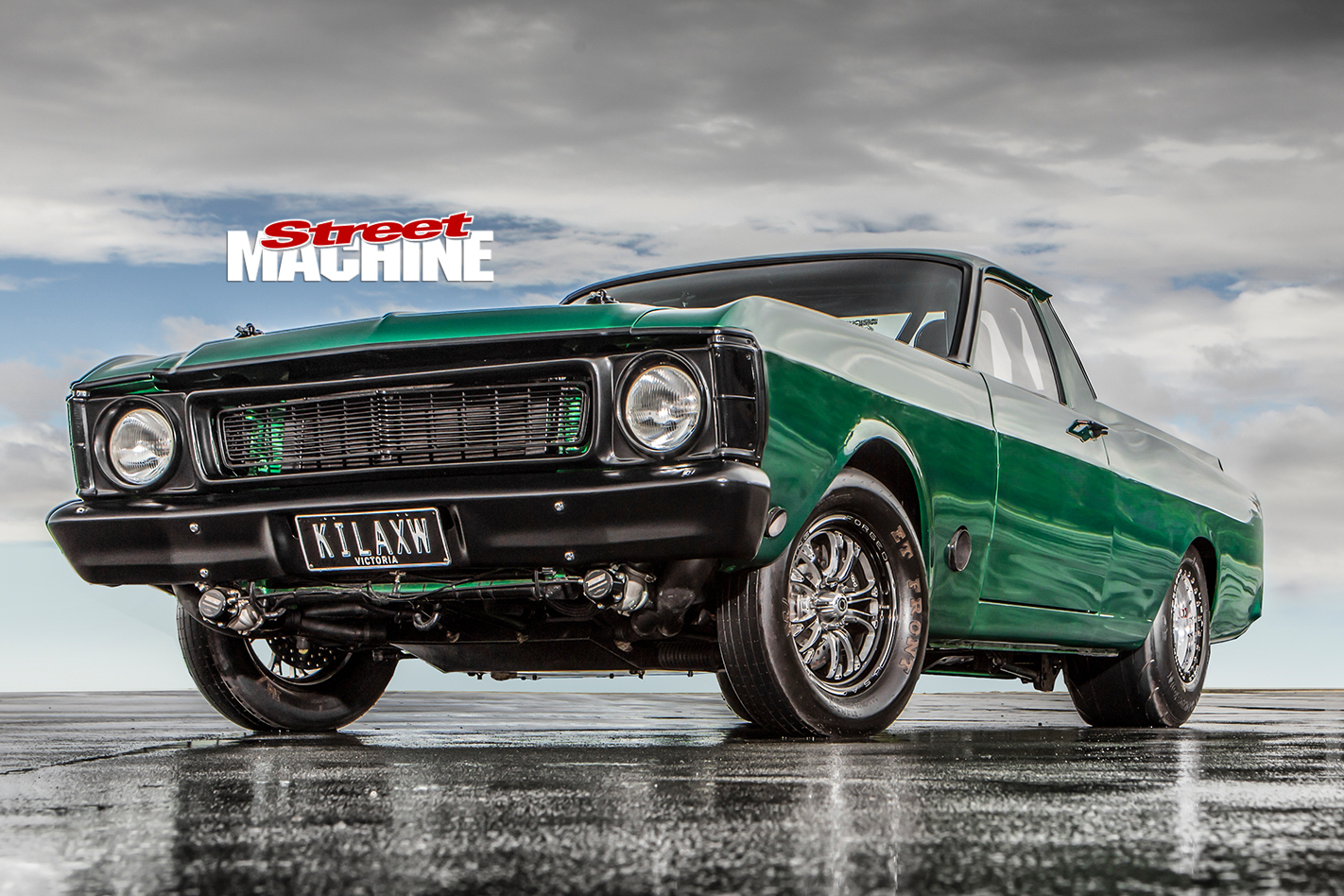 “I was 18 or 19 at the time,” Chris says, “and I bought it as an unfinished project. The ute was supposed to have a tough 393ci stroker but it shit itself the first time I drove it and we found out it was just a mild 302.”

Unperturbed, Chris decided to just keep moving on, and with a WB Statesman for a daily driver he set about building the motor the ute was supposed to have in the first place – albeit with a couple of added cubes. “It wasn’t a bad thing,” he says of the ute. “It was Blueprint blue and looked all right, so we built up a nice 408 for it.” 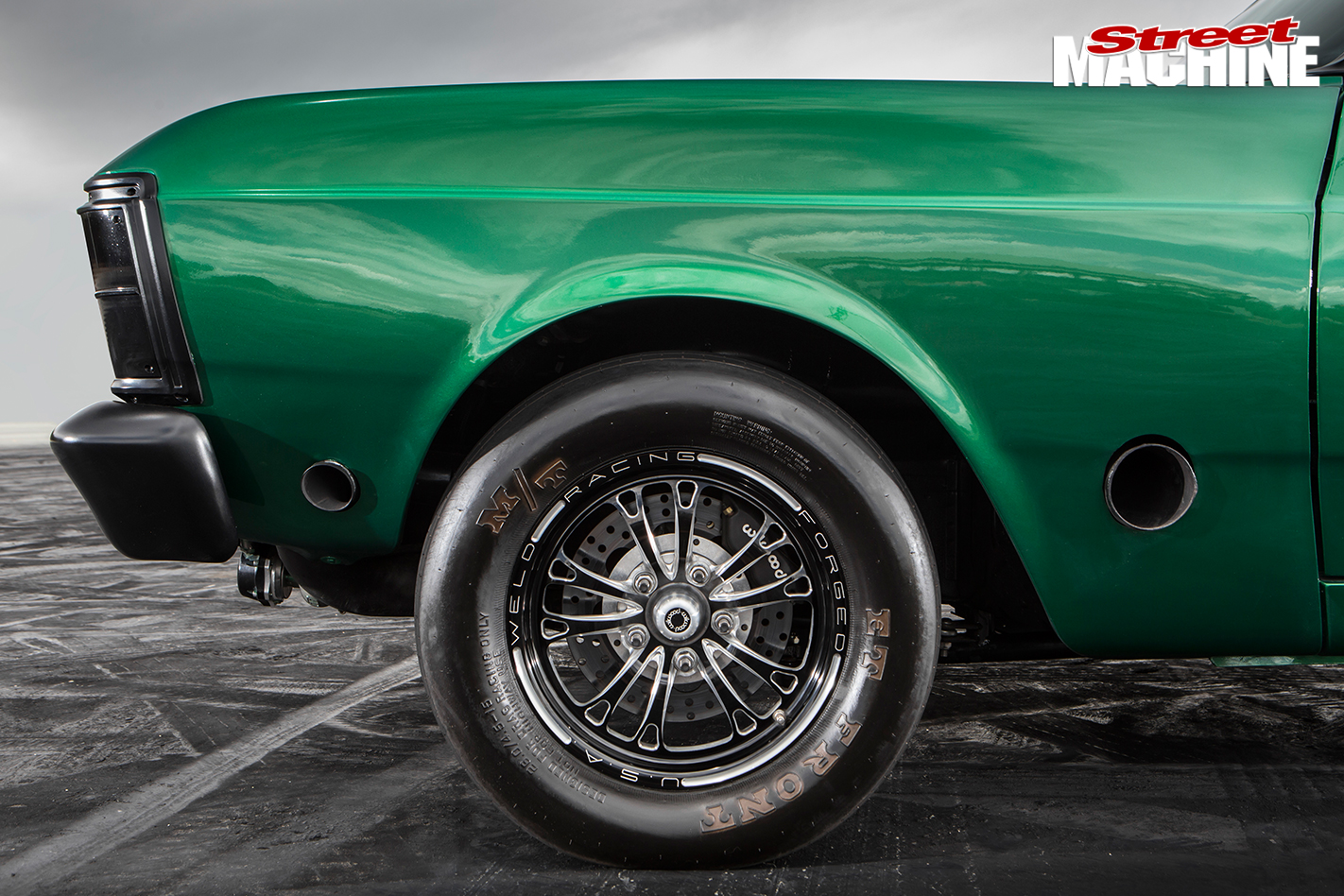 That satisfied him for a while, but grander plans were afoot. It’s one of those funny quirks about car guys: Sometimes we don’t know when to leave well enough alone. “I decided to paint it orange and build a serious nitrous combo for it,” Chris says. “It was a killer combination and it ran 10.50 naturally aspirated with a tight nitrous converter in it. Then we hit it with a 300-shot of nitrous and melted a piston on the first run. It still rolled across the line with a 9.90 or something after getting off it at half-track.”

Naturally Chris was a little bummed out, so he stripped out the engine and pulled off a few panels before losing interest and sticking it in a shipping container at his brother’s place. 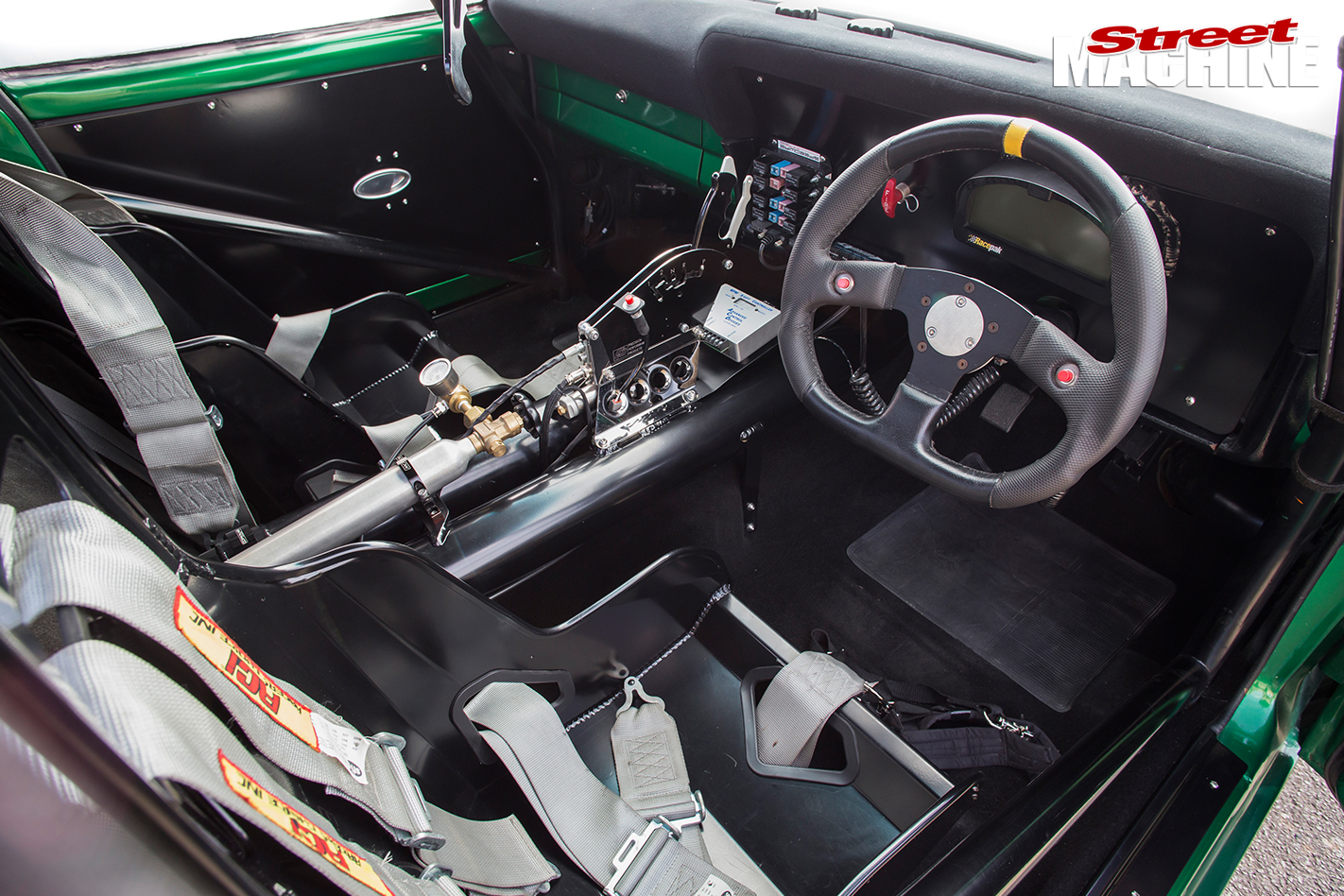 “I started thinking about selling it, but then somebody put me onto Frank [Marchese] at Dandy Engines,” he says. “We started talking about doing something with the old Clevo, but we worked out that it probably wasn’t strong enough for what I wanted. So we started pricing up a killer twin-turbo combo. Then Frank calls up one day and says the boys from Proline in the US have an engine sitting there all ready to go that their customer doesn’t need. It had all the good gear; in fact, it’s pretty close to what Frank and Steve Bezzina have in their cars.” 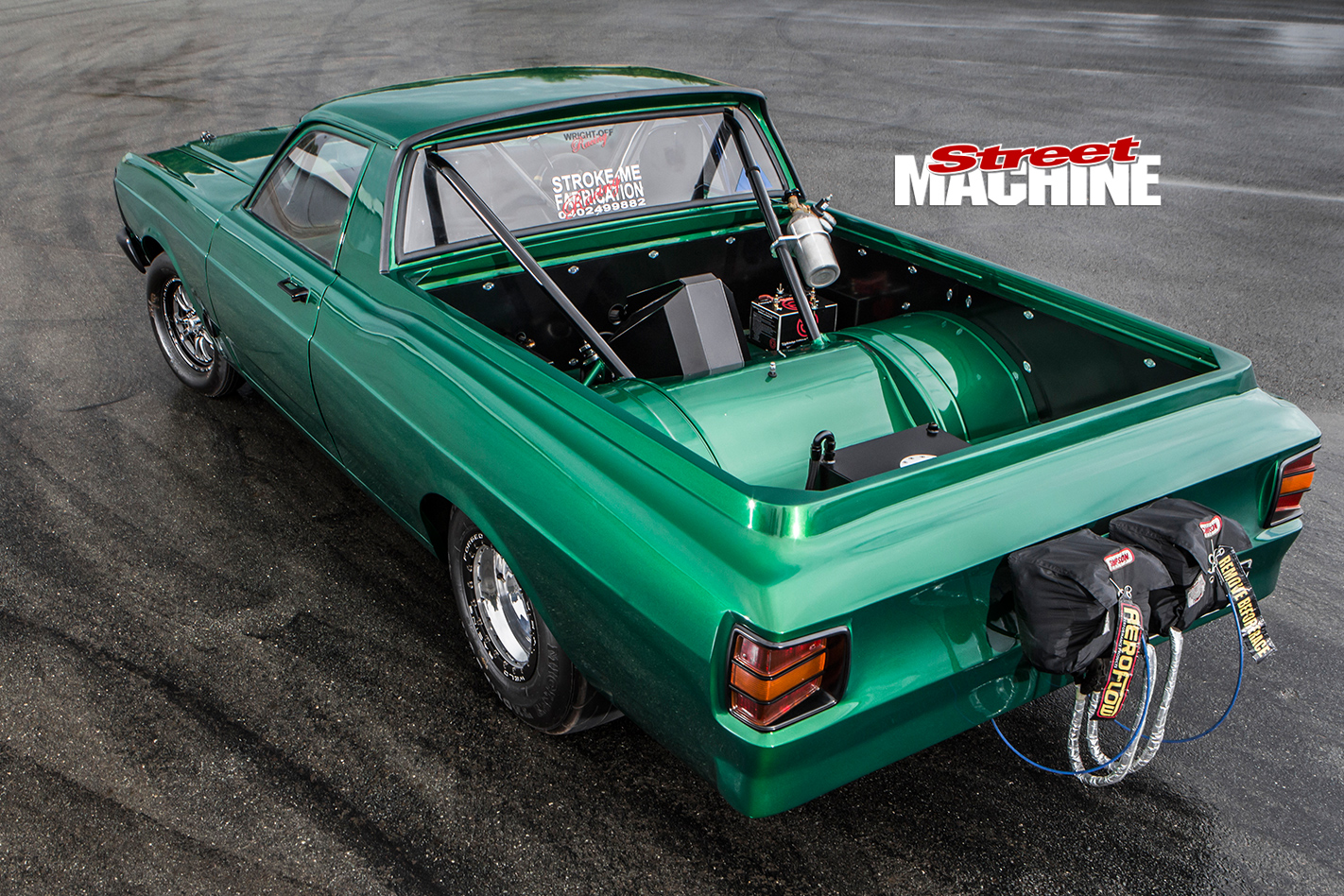 Of course, the engine was just the start. A combo like this needs some serious support gear and a chassis to handle it. Chris tapped his good mate Lucas Ellingham at Stroke Me Racing Fabrication in Ballarat for the serious metalwork. The ’cage, bracing, four-link rear, tubs and custom firewall are all his handiwork. Lucas also made the turbo pipework and intercooler piping, along with the fixed sheet metal in the tray, and he welded shut the tailgate. Chris’s brother Mick made the side panels in the tray, using wooden templates to get the right shapes before cutting them up on the CNC. 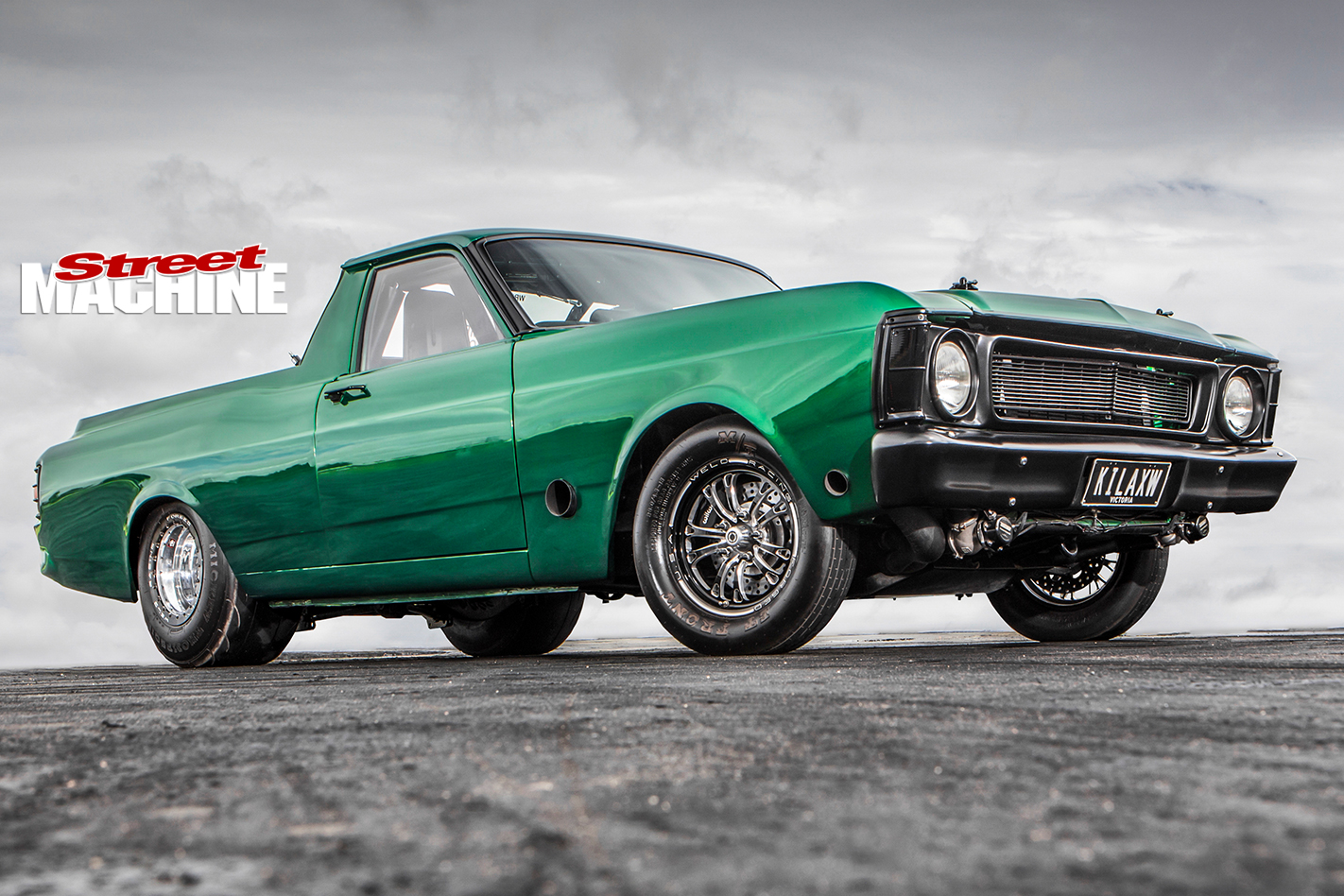 Glen Virgo went to town on the body, smoothing out all the panels and getting it ready for Matt Brame from Brame’s Paint & Panel to lay down some Wanda Poison Ivy.

Chris reckons the paint colour wasn’t really his choice. “I was going to go with orange again,” he says, “but I really couldn’t decide, so I let the guys decide while I was away for work. When I got the first photos I was a bit unsure about it, but I love it now.” 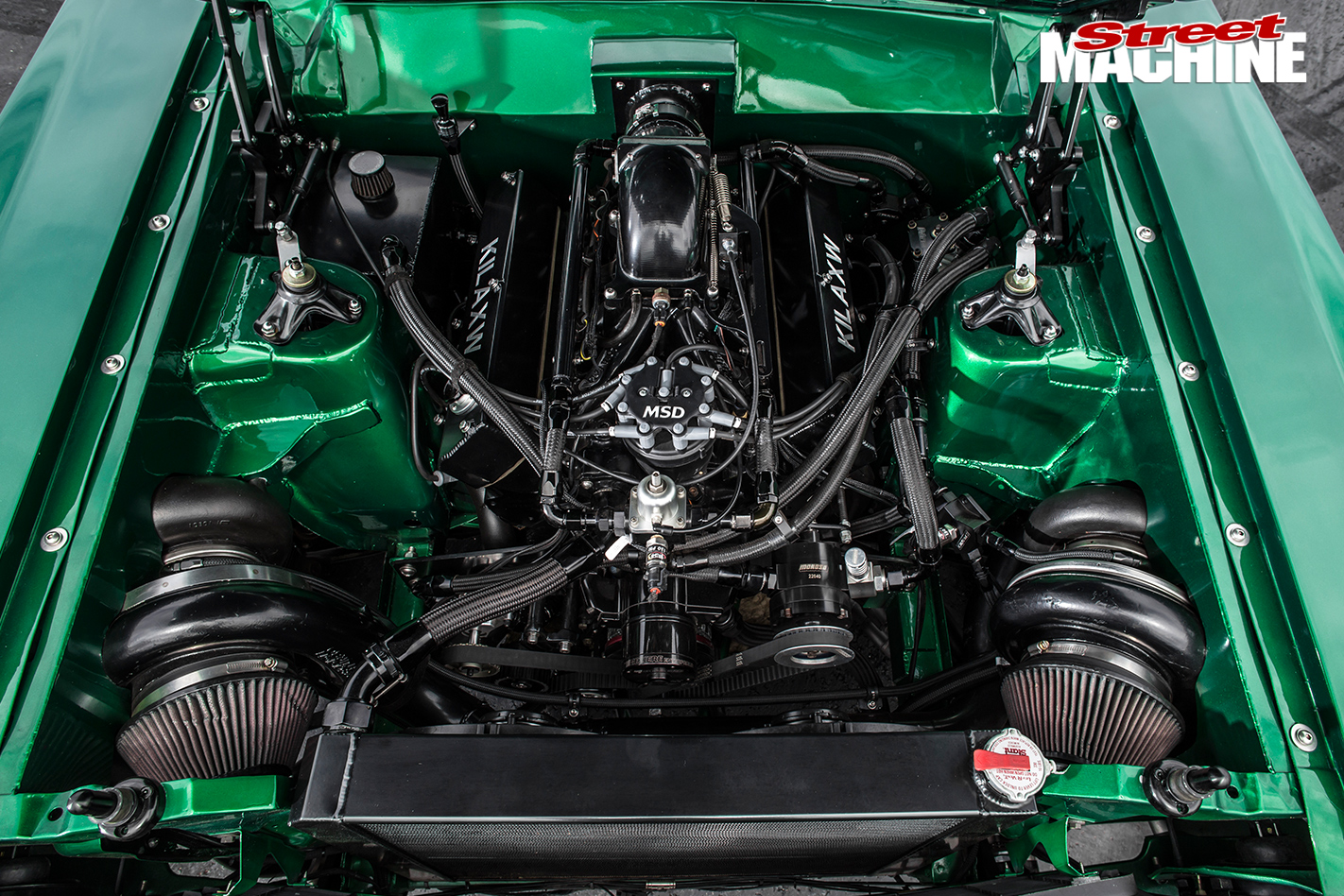 With the body and paint sorted it was time to turn the attention to the driveline again. The 441ci Windsor has all the good gear, with a Bryant crank, BME rods and Diamond pistons, but it’s those huge 88mm Precision Pro Mod turbos that do all the heavy lifting. There’s a Big Stuff 3 to control the MSD spark and gallons of Roo16 fuel flowing through the system, but they’ve only just started to tap into the ute’s capabilities. 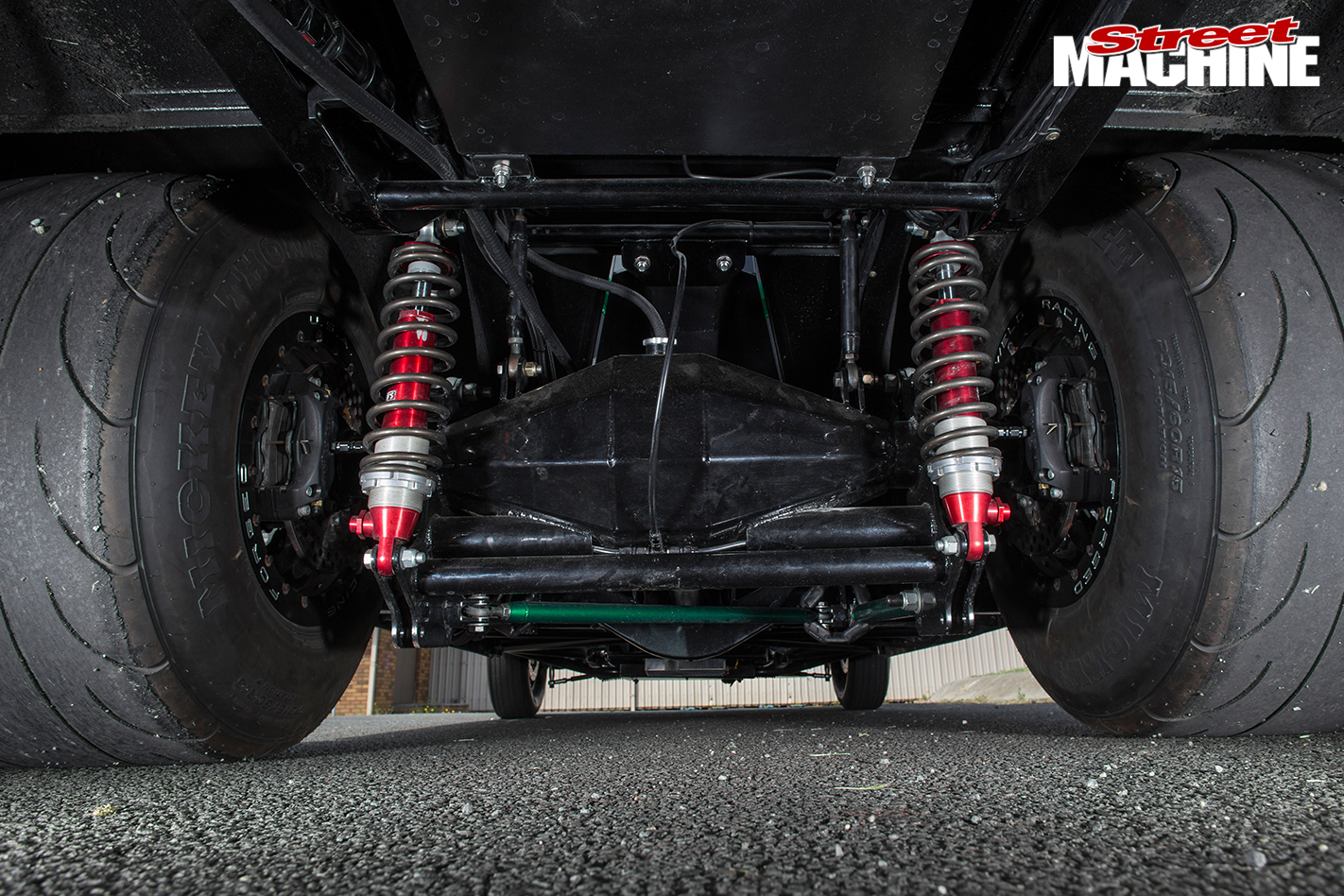 “It’s a very similar combo to what’s in Steve’s and our car,” Frank Marchese says. “But it’s a fair bit lighter and it’s got the four-link, so the potential is there. It should go 6.90 at over 200mph.”

The ute has already seen a little track time, but is yet to rip into a full-power pass. They’ve run 5.30 to half-track with only 20psi boost on board, and managed to take home the runner-up trophy in the Outlaw Extreme class at Calder Park’s Jamboree with Lucas behind the wheel, without even making a full pass. 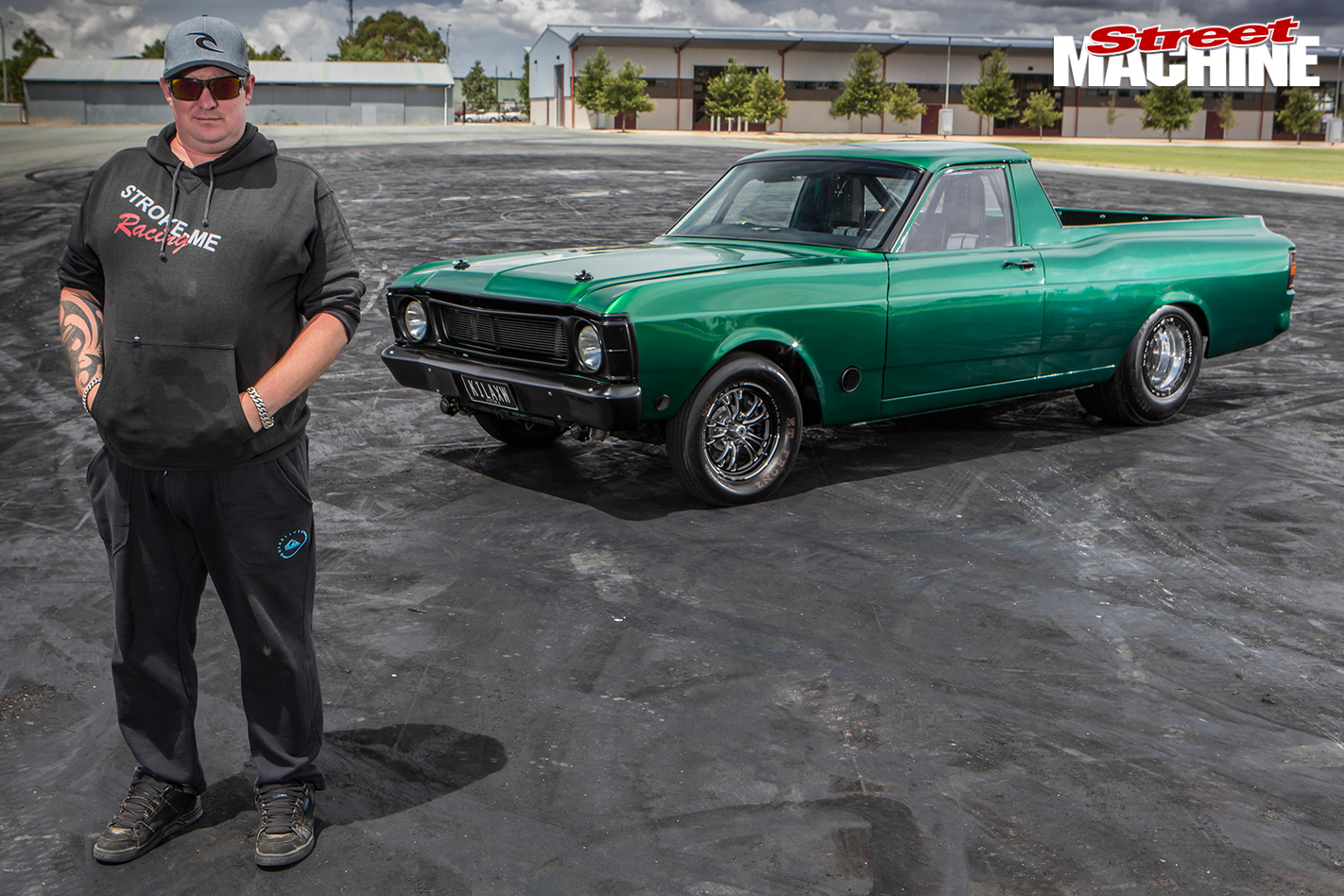 Unfortunately, Chris hasn’t been able to drive the ute, except for some early testing at Heathcote Park, and it looks like he might never be able to. “I suffered a stroke last year,” he says. “I woke up one Sunday morning and I couldn’t move or talk. I’d had a bleed on the brain during the night. With physical therapy I’m up and about now, but I’ve got no feeling down the right-hand side and the nerve pain is pretty bad.” 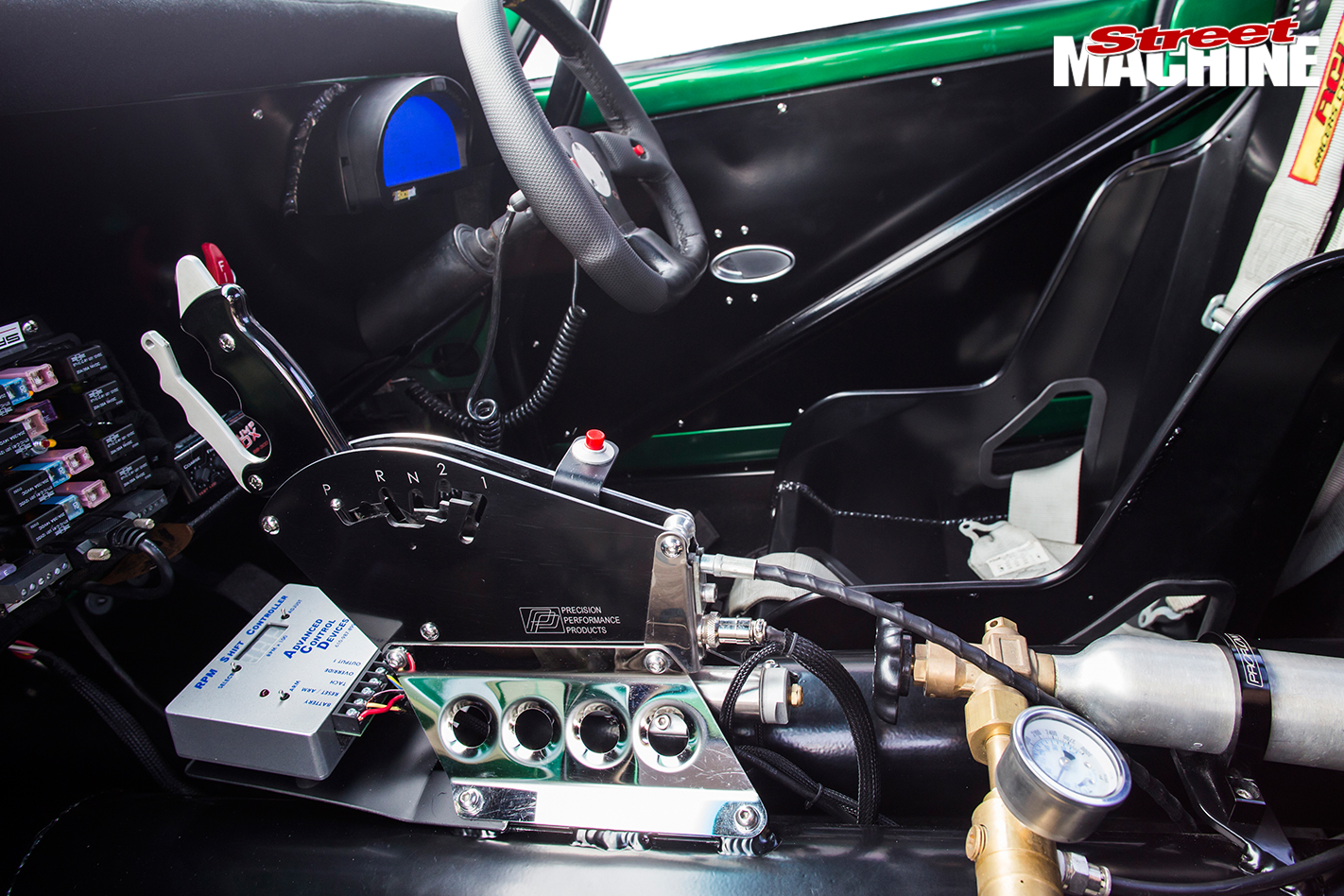 So his mate Lucas is handling the driving duties and they’re trying to creep up on the tune before the car goes to a new owner.

“Yeah, I’m going to sell it,” Chris says. “The idea was to chase the Outlaw Radial title in the APSA Series and do a fair bit of travelling with the car. Unfortunately, I’ll never be able to get an ANDRA licence again, so I’ll have to move it on once it runs some kind of number. 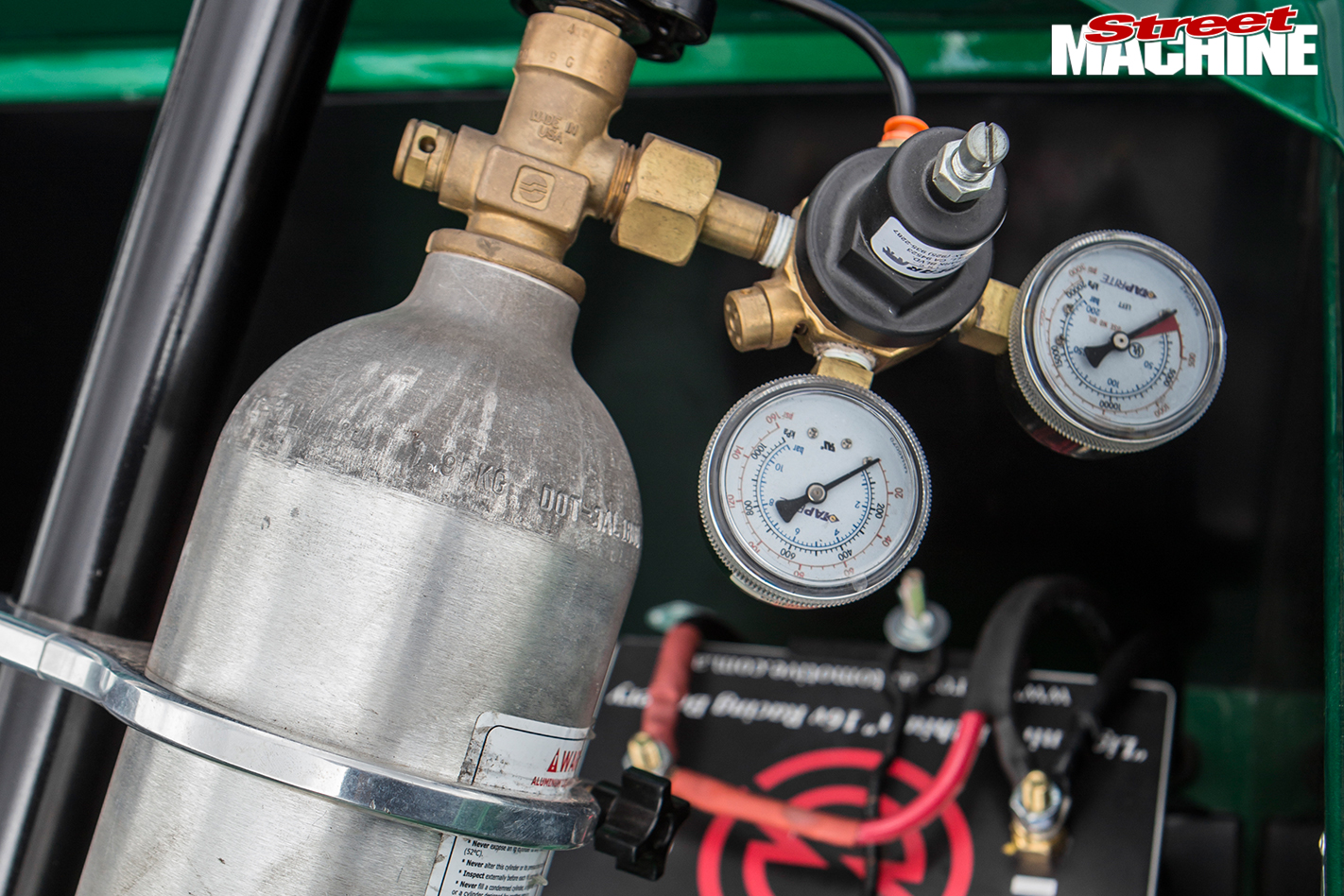 “It’s a shame, but there’s no point having a car like this if I can’t enjoy it.”

Chris isn’t ready to walk away from cars altogether though; he’s got plans to restore a matching-numbers LC GTR as a family cruiser. It won’t have the capabilities of the Falcon ute, but it’ll be a bit of fun for the family. 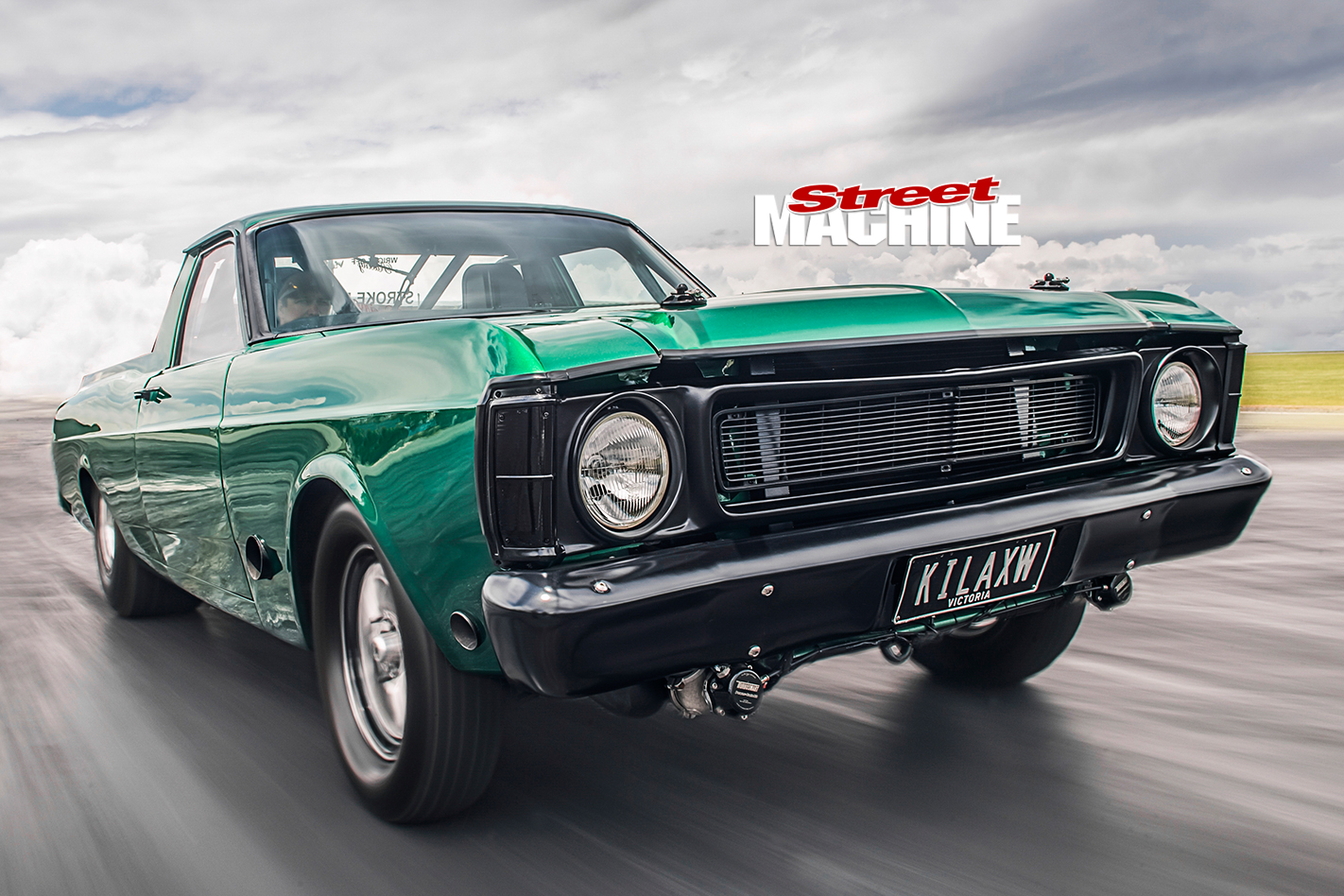