Alan Hale's '28 Model A Tudor looks incredible from the outside (see it here at the recent Vic Hot Rod Show), but it's the recreation Roof 101 Cyclone head-equipped four-banger and chassis underneath that make it truly special. Here's a closer look at the engine and set up before the body was attached

This article on Alan's Model A chassis was originally published in Street Machine Hot Rod no.17 magazine

THIS is a 1928 Ford Model A Tudor, well, it will be. Normally we would wait for it to be finished before featuring it, but this is special, very special. It started with Central Coast vintage car collector Alan Hale wanting to turn his period-perfect Model A into a hot rod. Enlisting the expertise of veteran car builder Tony ‘Webby’ Webster, it should have been a straight forward job.

But when Alan revealed the engine set up he wanted to use, things became special. Which is why we had to capture it frozen in time and show you before the body goes on and this all disappears from view.

Owner Alan Hale is a vintage car collector and Model A expert, but didn't know much about rod rods, so went with what he did know about engines - it's a 200ci 1934 B-model Ford engine rebuilt with modern components

The engine is a four-cylinder B block from a 1934 Ford truck which isn’t that unusual, but it’s wearing a Roof 101 Cyclone four-port head and that’s a big deal. The head was invented in 1928 by speed hunter Robert Roof and is considered to be the first overhead valve conversion made available for a 1929 Model A. Using his OHV set up Roof got an extra 60 horsepower from his Roadster and hit 101 miles per hour.

Only six Roof heads are believed to still exist today. This isn’t one of them, but it’s the next best thing — it’s a recreation of the head by Robert Roof’s grandson Jim Roof and US vintage speedster guru Charlie Yapp who are now selling them. That’s how Alan came to get his, but he had no idea what he was going to do with it — and then he met Webby. 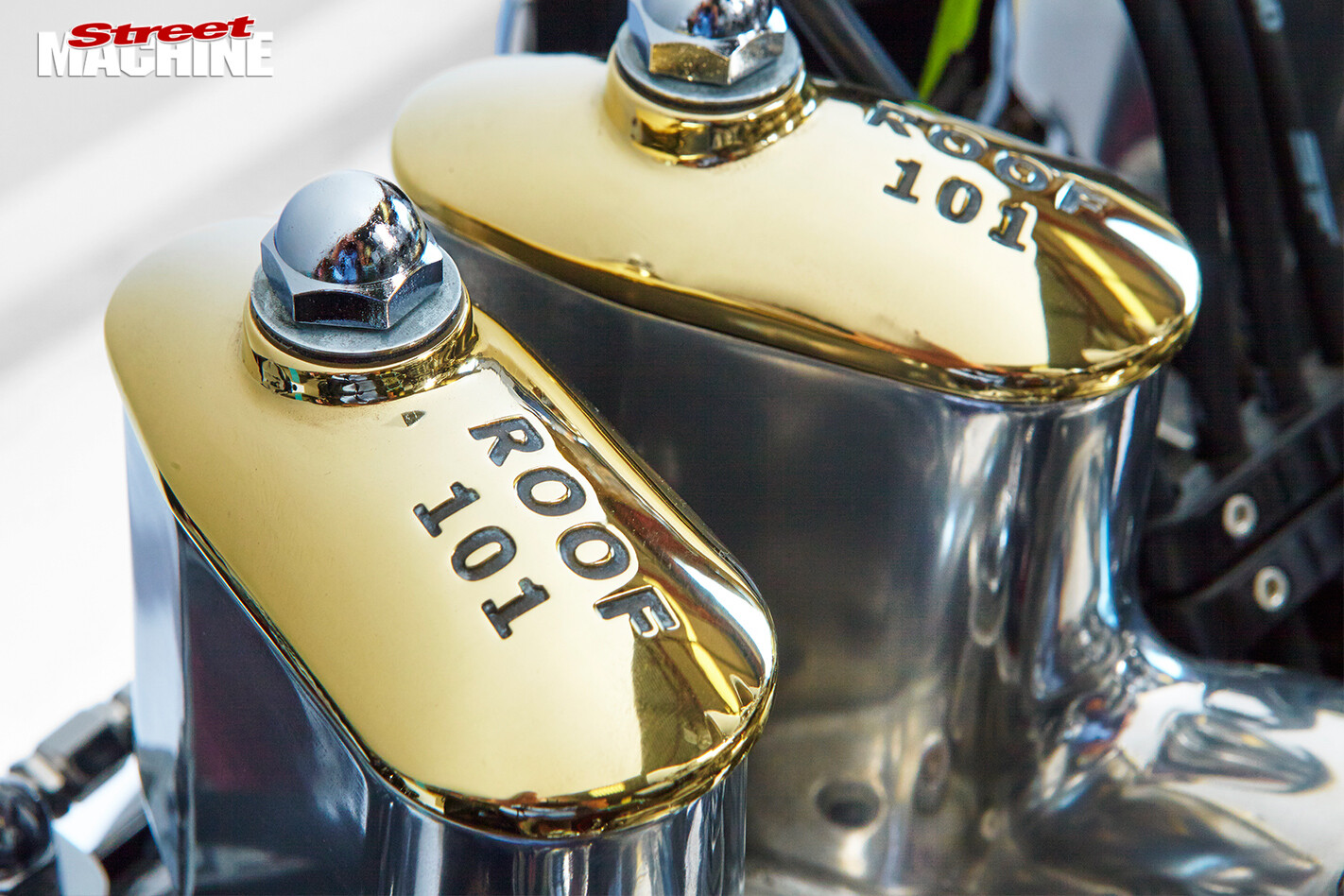 “I’ve always wanted to build a hot rod but I’ve never really had the knowledge. Webby’s the master,” Alan says. Webby remembers Alan coming to him with his initial plan for a hot rod: “He wanted a black Tudor, chrome wire wheels, Jag diff, 350 Chev-style car,” Webby says. “But knowing he was a collector I said to him: ‘Come on, you must have cool vintage shit at home?’ He told me he had a Roof 101 head and I said: ‘What the hell’s that?’”

It may not have seemed obvious before they started but it was suddenly clear to Alan what to do: “I thought let’s do what we know. I’ve built so many Model A motors and knowing what I knew I just thought this is it! This is going to be the ultimate motor — and then it all took off!”

Webby became obsessed. Getting hold of the engine block and the Roof head he ground all the castings smooth — a Webby signature move. Those shiny aluminium boxes which house the rockers and inlet valves didn’t arrive at Webby’s looking like that. They had a dull finish and Webby polished them to get them to this point.

“Seeing the block smooth and polished, I thought: ‘Fark! This thing is stunning.’ Once we started down this track the build got bigger than Ben-Hur. I felt I had to do the engine justice and go all out on everything,” Alan says.

When it came back, three 97 carbies fit in perfectly, but the split-Y headers didn’t and Webby had to machine them to allow clearance for the steering.

Webby was then confronted by the biggest challenge of the build. Being a vintage engine it only has one accessory hole — for the generator. It had no holes to bolt an alternator or air-con to.

A Winters quickchange diff keeps it looking traditional at the back, while those little airbags will tuck neatly under the rear seats. Webby also went for the ladder bars

“I sat there for two days holding a big heavy air-con pump going: ‘Where the hell am I going to put this?’” Webby recalls.

His solution was to fabricate the chromed engine plate at the front and bracketry to mount the air-con compressor (with the help of a couple of water pump holes), as well as incorporate the alternator, plus the serpentine-style drive and idler pulleys.

Like anything that’s done well — it all just looks right.

A Borg Warner T5 transmission out of a Chevy S-10 was chosen because the shifter on these is situated in the middle of the box like a Model As. For the bones of the chassis, Alan supplied a pristine example that he had sitting under a Model A tourer, but the rails are about the only bit left. Webby boxed them, kicked them up at the back, added a rear crossmember and slotted in a ’32 crossmember for the front.

Being an electrician Alan is practised in the art of wire hiding, but what he’s done here is exceptional — threading all cabling through the inside of the chassis rails. Webby took it another step further and is now running the brake lines and anything else through them, too.

The crossmembers are a Webby specialty in the way they flow out of the chassis rails and are angled twice.

Webby hand makes the X-members by bending them around a pole to get those two angles. The circular transmission mount where they meet was also handmade using a 1mm cutting disc

The circular transmission mount where they meet was also handmade by Webby. “I just got a big fucking piece of steel, threw it on the bench, found something round to mark it out and attacked it with my 1mm cutting disc, then got my grinders into it,” Webby says.

Airbags that will tuck in under the rear seats, ladder bars and a Winters quick change 10-bolt diff round off the back. Keeping things looking traditional is Rod-Tech I-beam front-end with a polished aluminium Super Bell axle and hairpins.

By the time you read this the body will be back from the painters — jet black with a white roof. Webby says that while he hasn’t made any major modifications to the body, there’ll be a few tricks to the interior. Who knows what that means, but you know whatever Webby and Alan come up with it won’t be ordinary. 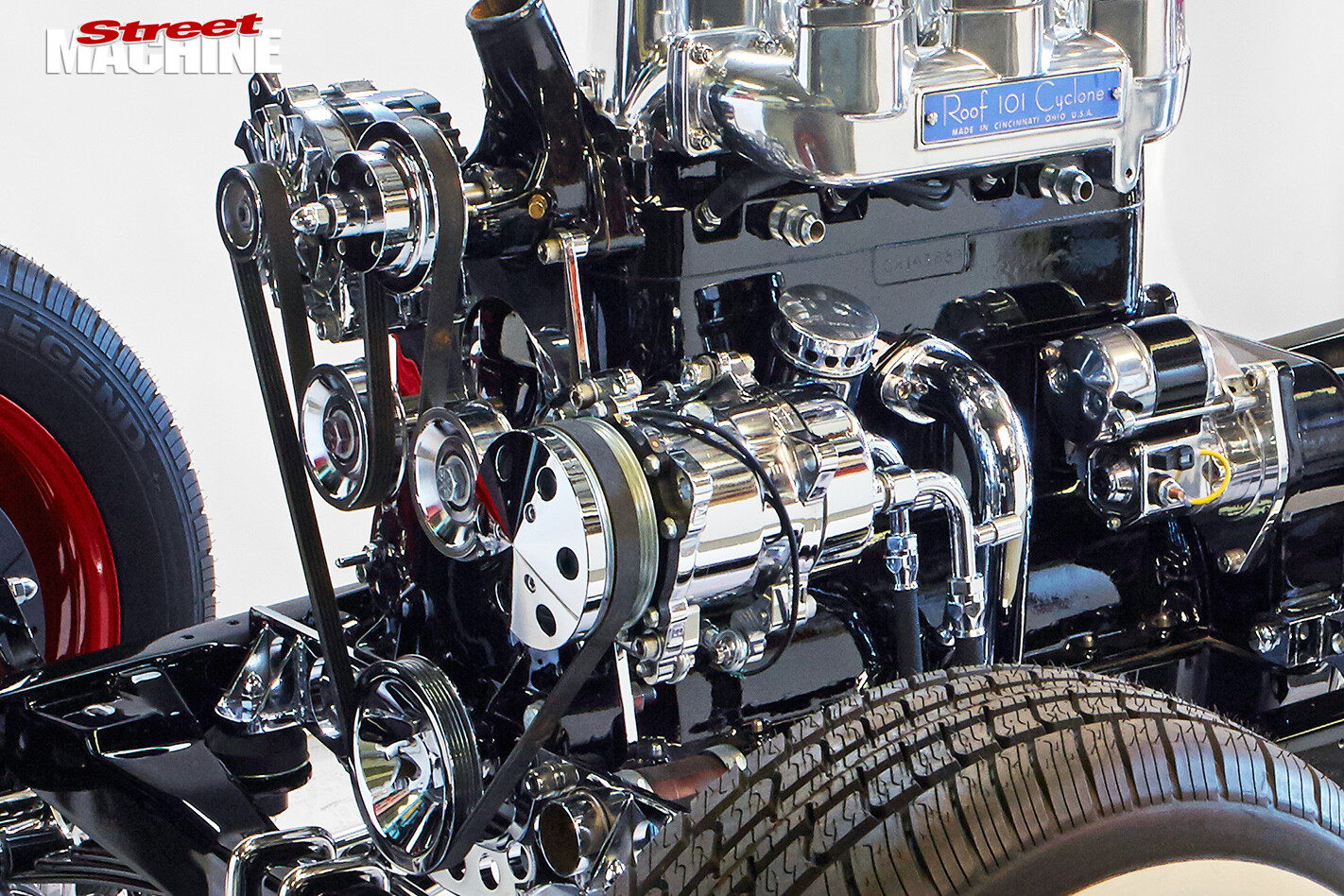 The biggest challenge Webby faced was where to hang the air-con pump — these vintage engines only had one hole for an accessory. The answer was to build the engine plate and bracketry which also incorporated the serpentine-style drive belts and alternator: “I had to figure it all out and make shit — it was complex,” says Webby. 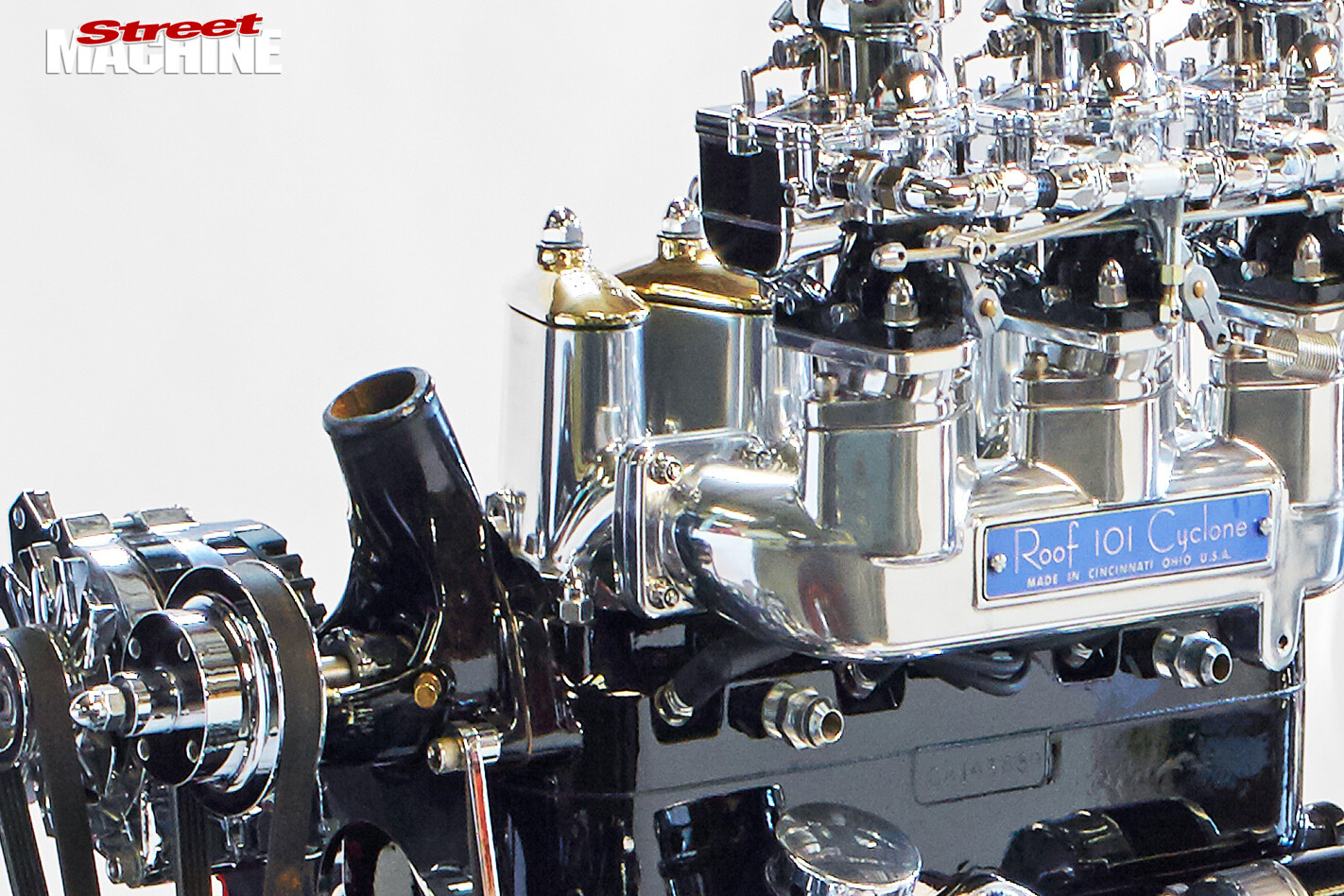 In 1928 speed hunter Robert Roof invented what’s thought to be the first OHV conversion — The Roof 101 Cyclone — adding 150 per cent more power to the four cylinder engine in his Model A Roadster and pushing him to 101 mph. The head you see here is a recreation of that engine by his grandson Jim Roof Rather than use the flimsy chassis from the 1928 Model A, Alan donated beefier 1930 rails to the project Alan’s spent most of his life in cross-plies and he’s looking forward to not going sideways down the highway in the wet with these white wall radials on 15 inch wire wheels with disc brakes all round, including Wilwoods at the rear Webby has ground down every casting on the engine block and head to make them seamlessly smooth. He didn’t stop there though — every nut and bolt on the entire chassis has been ground smooth to a 30 degree dome. That’s a Rod-Tech I-beam front-end with the axle swapped out for a polished aluminium Super Bell axle 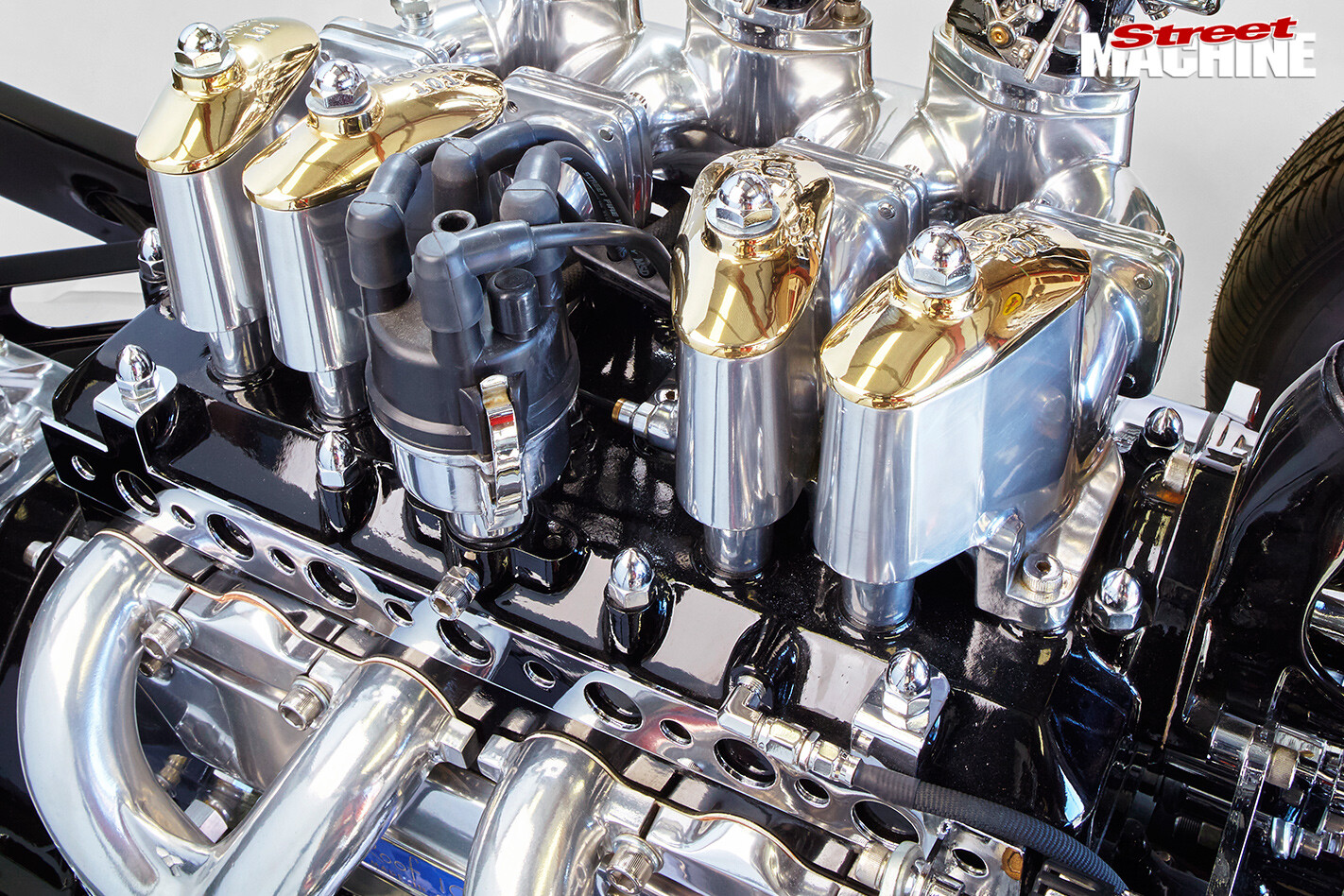 Under those polished aluminium cases live the rockers and inlet valves. The exhaust valves are still in the block - so this is still a side valve engine. Back in the day only two carbies were used with Roof heads but Alan and Webby have fitted Three Stromberg 97s