IT’S JUST after six on a February evening. After a stinking 34-degree day, the sun is dropping towards the hills west of Newcastle – a gorgeous orange-tinged summer twilight. A neat-looking backyard Colorbond shed’s twin roller doors are up, revealing a wine-hued Mustang propped up on chassis stands. Partially covered with a blue dust cloth, its bonnet is up and its wheels scattered on the concrete driveway behind it. 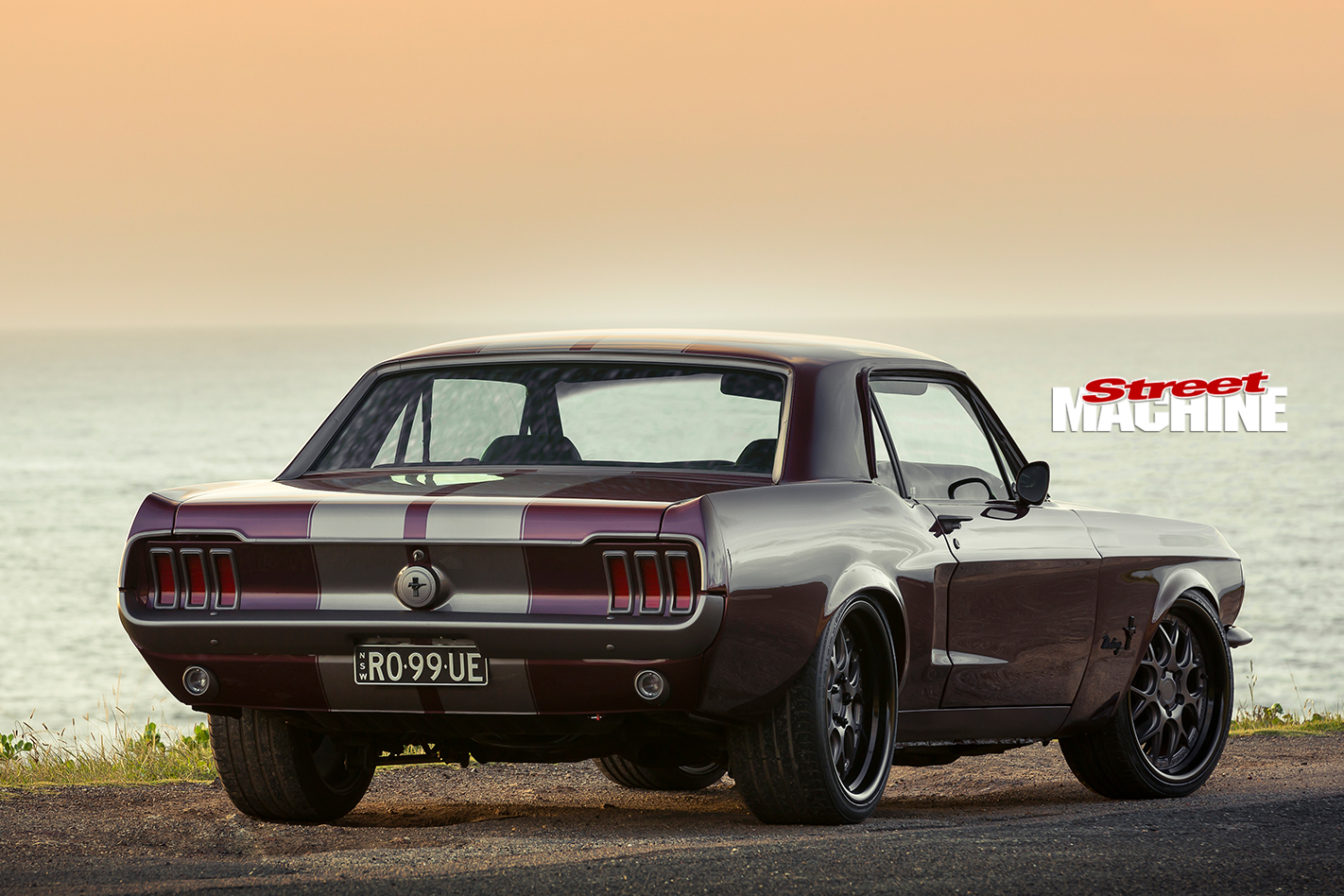 Terry Morton is in his own little world, pottering around under the bonnet.

“Oh, sorry mate!” he says, realising he has company, then quickly reaches out to shake my hand. “I’m just fitting a new oil cooler ready for Powercruise this weekend.” He wipes the sweat from his forehead and stares out at the glorious evening. “What a day, eh? Good to meet you; do ya want a beer?” 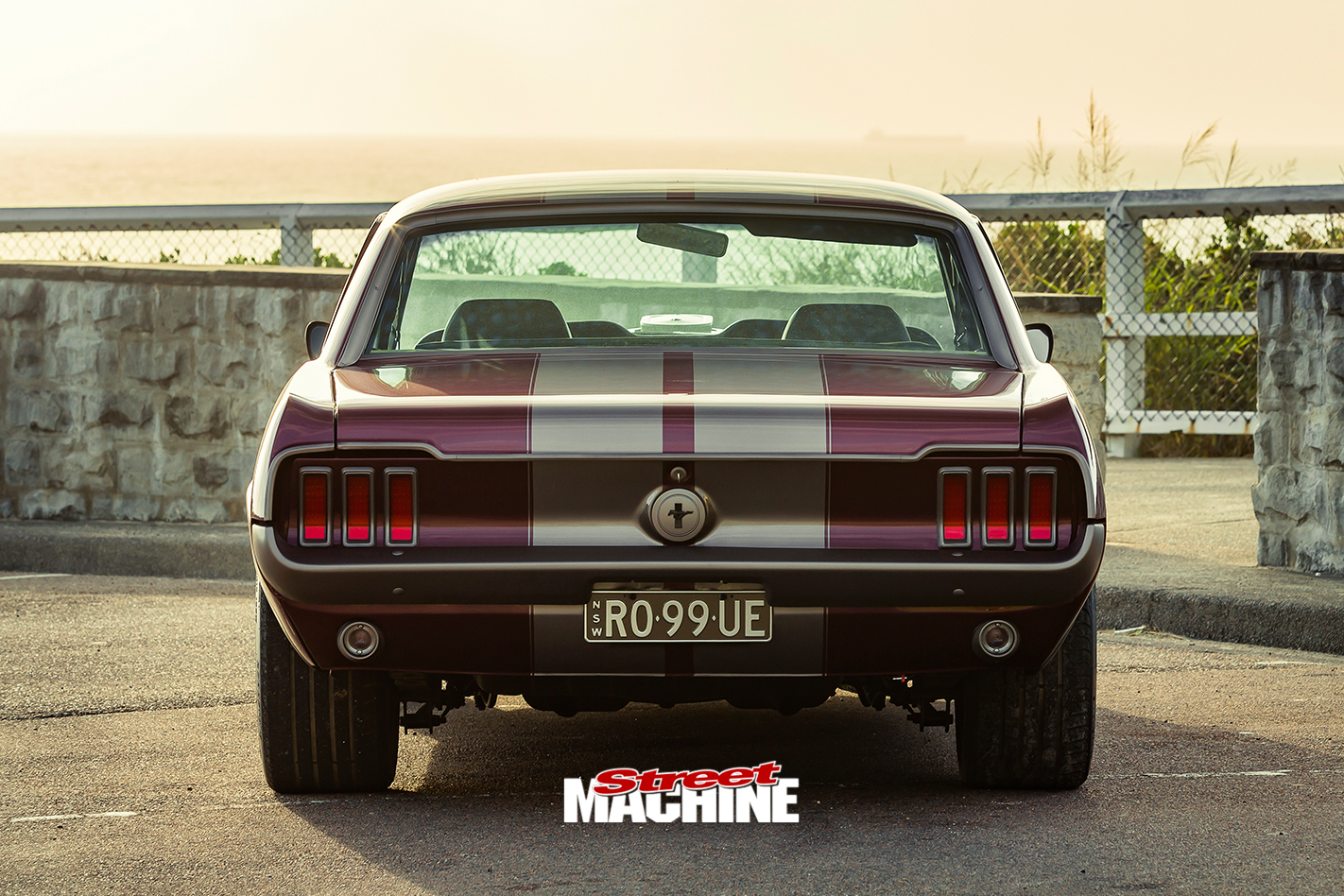 Yeah, rightio! This bloke – and his son Adrian, who soon joins us – is living the dream. Six weeks beforehand, Street Machine shooter Peter Bateman and I had spotted the Mustang out on the oval at Summernats, and straight away thought: Yeah, this thing’s cool. But the terrific street-class ride you see here is the result of stacks of hard work and sacrifice. It also represents lots of good times – and beers – in this modest backyard workshop where Terry and Adrian created this car. 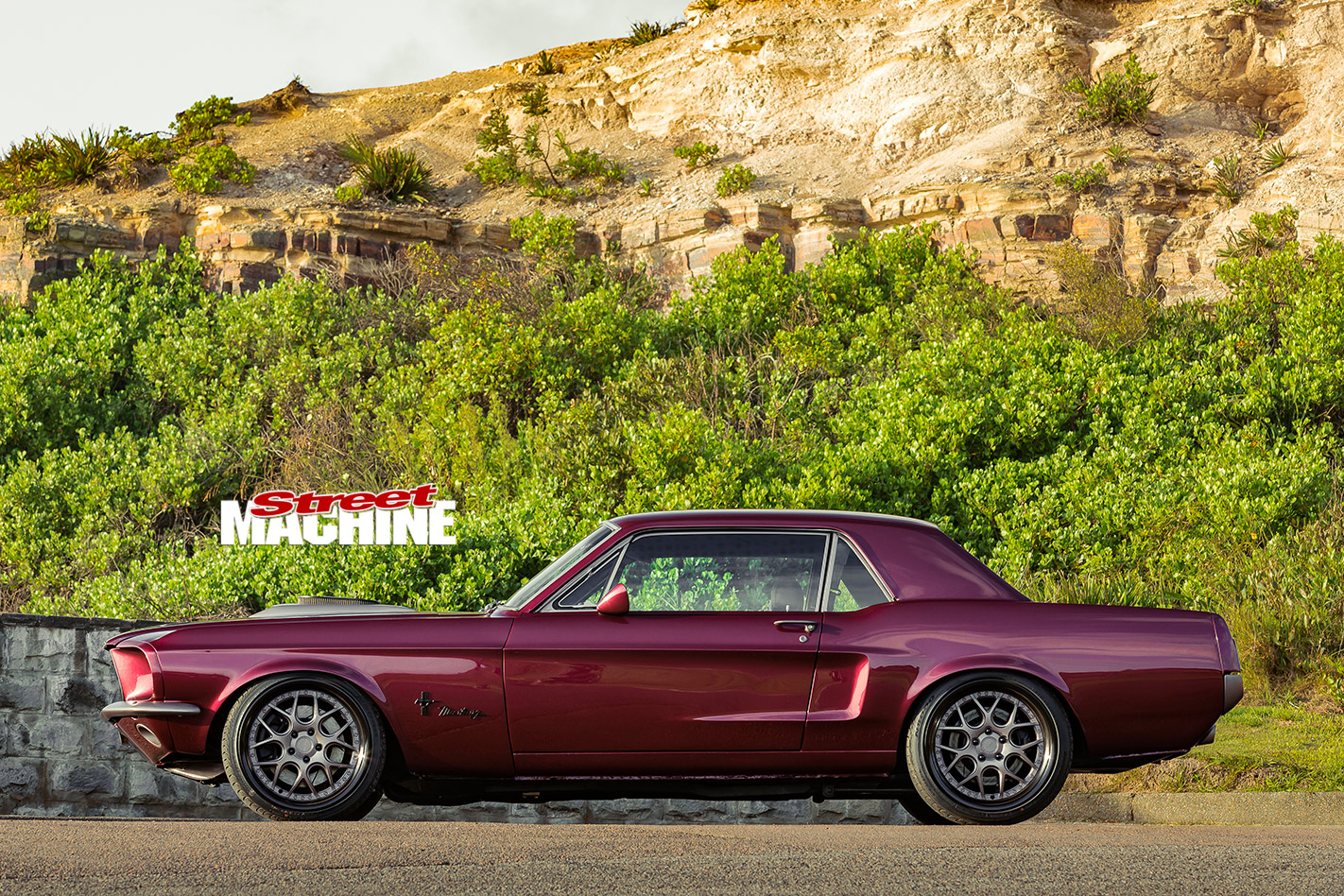 Of course, it wasn’t always the classy, high-standard pro touring-inspired car it is now. It was bought as a toy about 16 years ago from Melbourne, and the little flip-photo book Terry and Adrian have of the car is filled with shots of a tidy but typical 90s-era Mustang: burgundy paint over 12-slotter wheels and factory chrome bumpers. 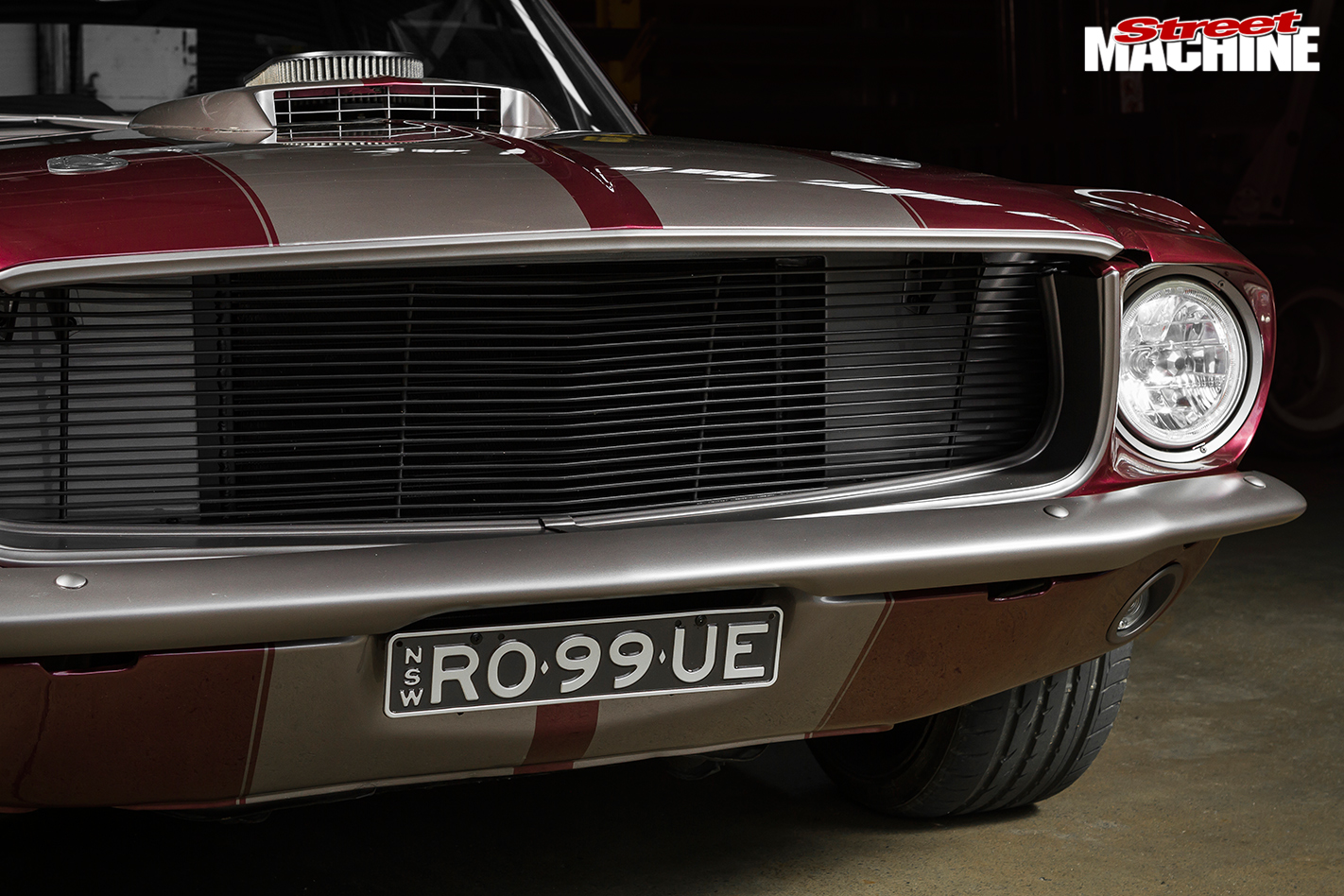 But in 2003, Terry decided he wanted to make some upgrades and tidy things up a bit. “I wanted a 351 rather than the 302,” he says. “And there were plenty of holes in the engine bay that I wanted to smooth. It was going to be just a quick tidy-up but, hey, you know how it is – it just grew from there!” 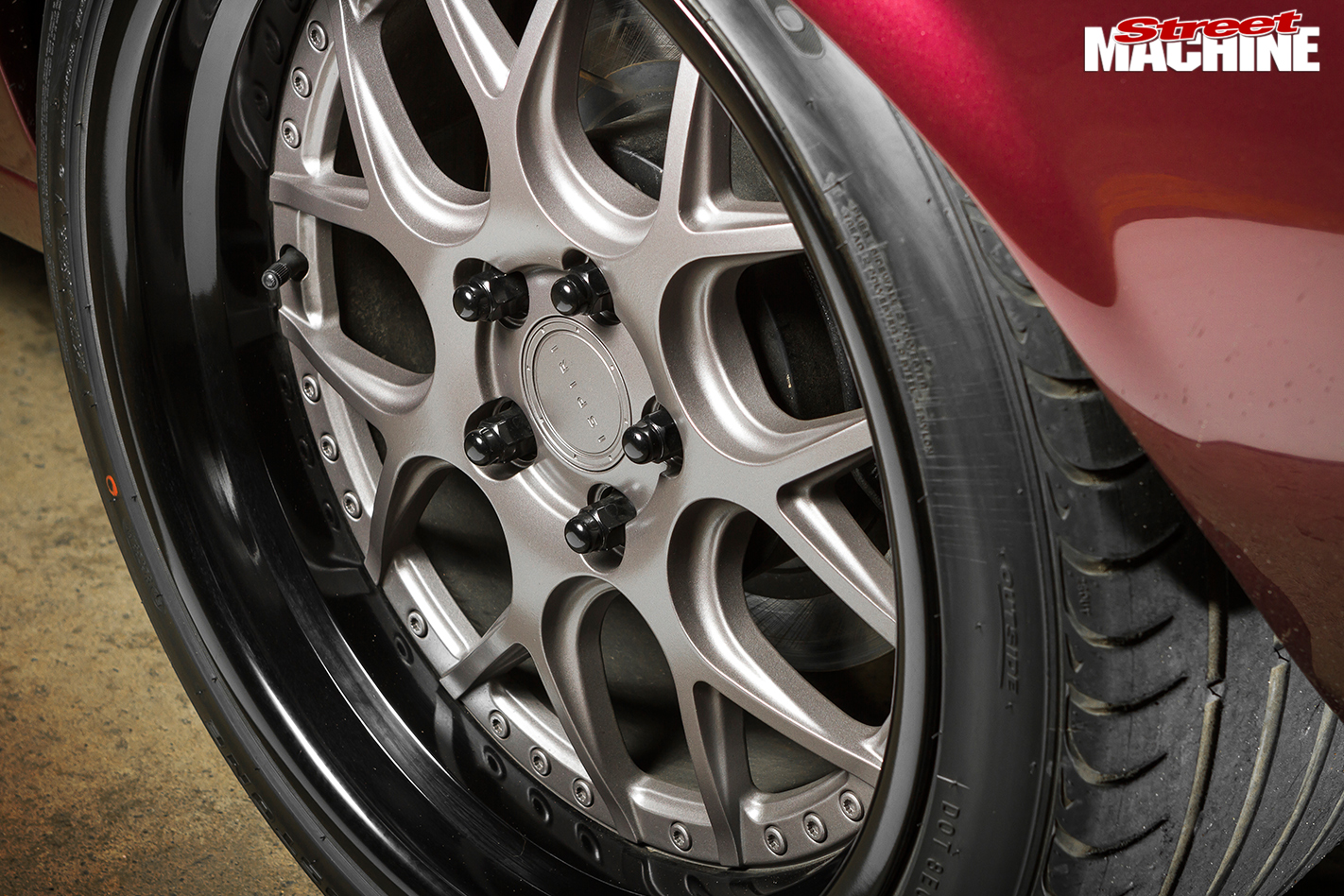 Along the way, it was discovered the old backyard shed was hosting termites, so it had to be replaced. Voila! New shed – steel frames this time. To cut a long story short, the Mustang was ensconced there, and after a significant tidy-up it scored a couple of street-class trophies including 3rd Best Coupe at Summernats 27.

“But we had a few issues with the engine,” Terry says, “and we got sold some dud parts, so that kind of bled into this build here.” 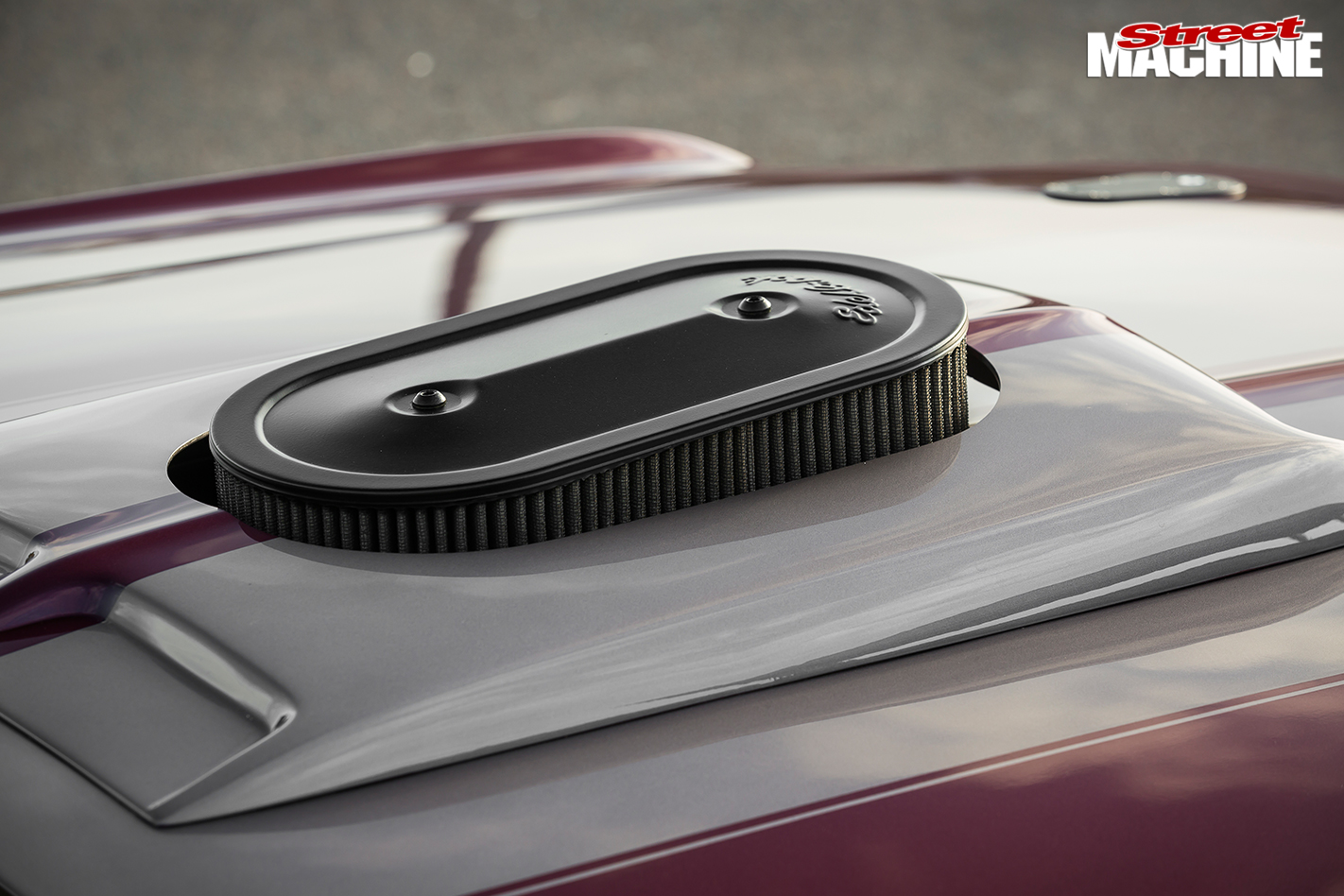 Inspired by the trophies – and with plans for big power – Terry and Adrian decided to put a lot more effort into the car. One of the first tasks was to notch out the front towers for exhaust extractor clearance. This mod goes hand-in-hand with the RRS front struts (replacing the Mustang’s standard wishbones), big brakes and power rack-and-pinion steering conversion. An important ambition for Terry was to smooth the engine bay; with plenty of poke expected, a false firewall was fitted over the original to add shine as well as strength, and most of the engine bay has been seam-welded before being smoothed. 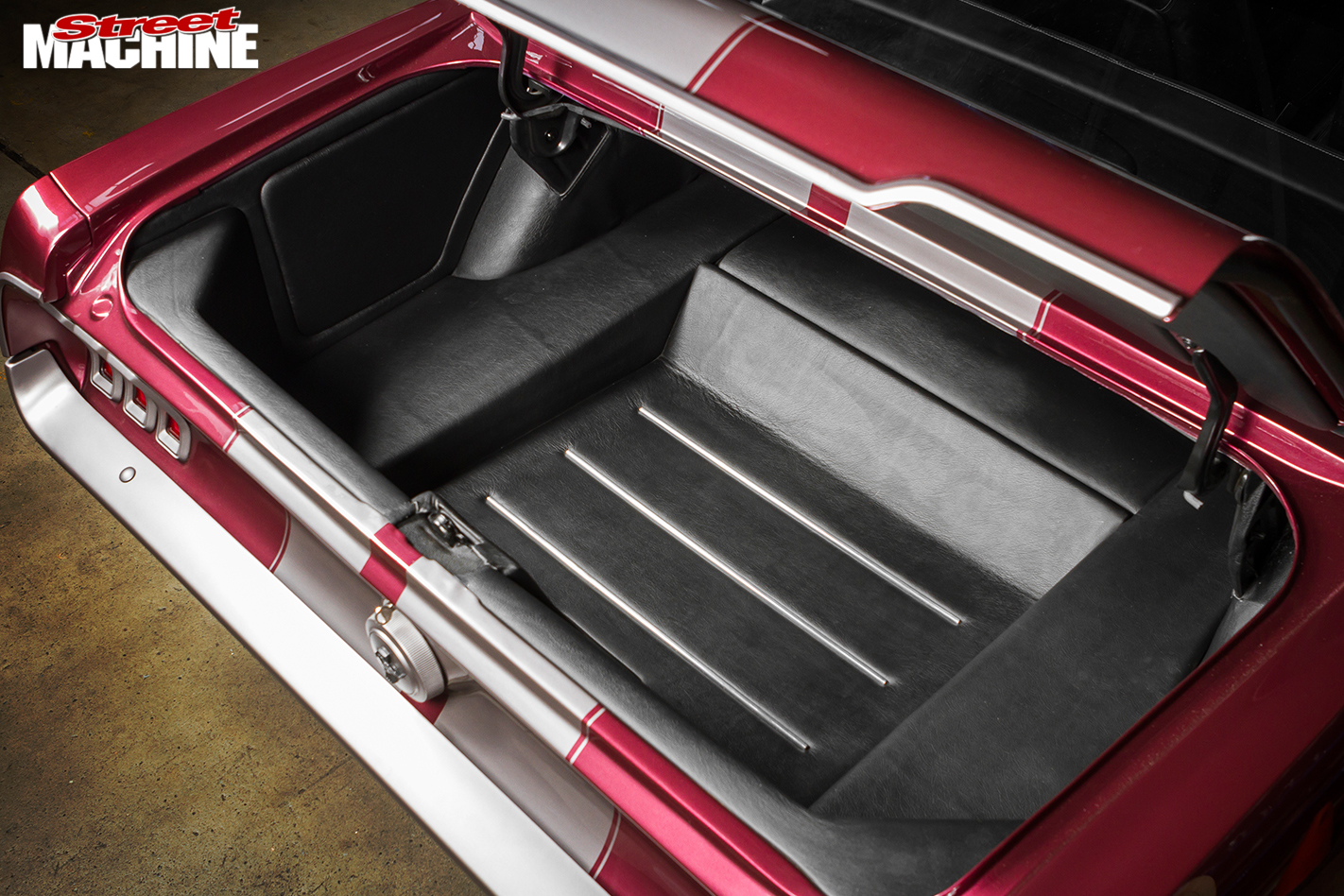 Keeping things neat is an RRS under-dash brake booster/master cylinder, while a chassis reinforcing kit adds strength and connects the rear springs’ front hangers to the front chassis legs. “When you look at these underneath, there’s really not much keeping them together,” Terry says. He’s right – a standard Mustang on a hoist reveals a very simple and light floorpan and chassis construction, so the chassis kit helps keep everything tight in the face of lots of extra torque. 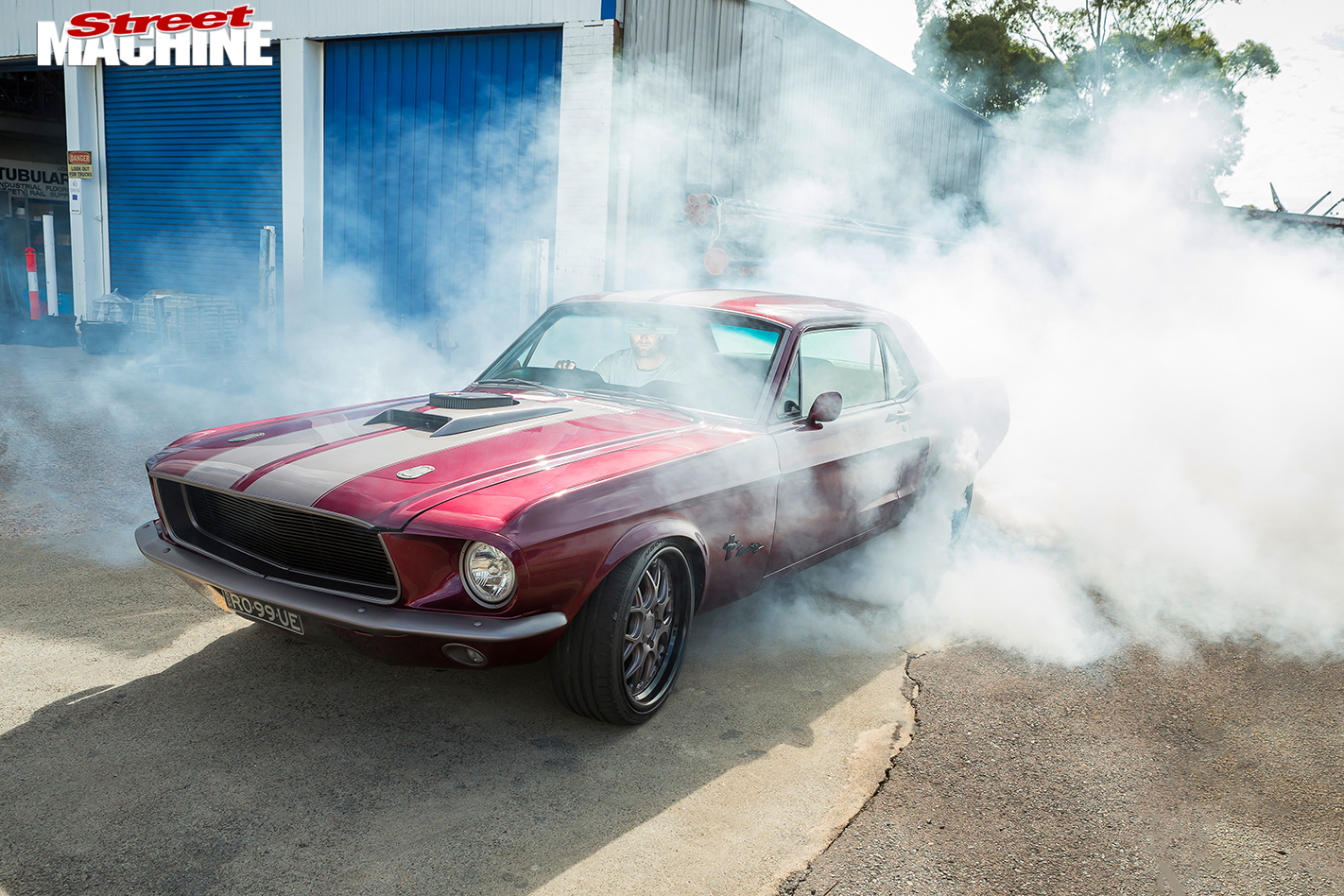 While there’s plenty of work in the engine bay, most of the Mustang’s classic lines remain close to standard, but highlighted with a pro touring-styled build theme that included tucking in the rear bumper. Like many street-class car builders, Terry and Adrian focused their efforts on the areas that could be seen and enjoyed; it’s all simple straight black underneath. They performed most of the work at home with assistance from a bloke known as Nads, with the car only leaving the shed for paint and trim. Newcastle’s Kingpins Kustom Paint laid on the Mercedes Ruby Mica and purple-hinted silver stripes, with Adrian and Terry doing their own bumper and body trim painting at home in the shed. 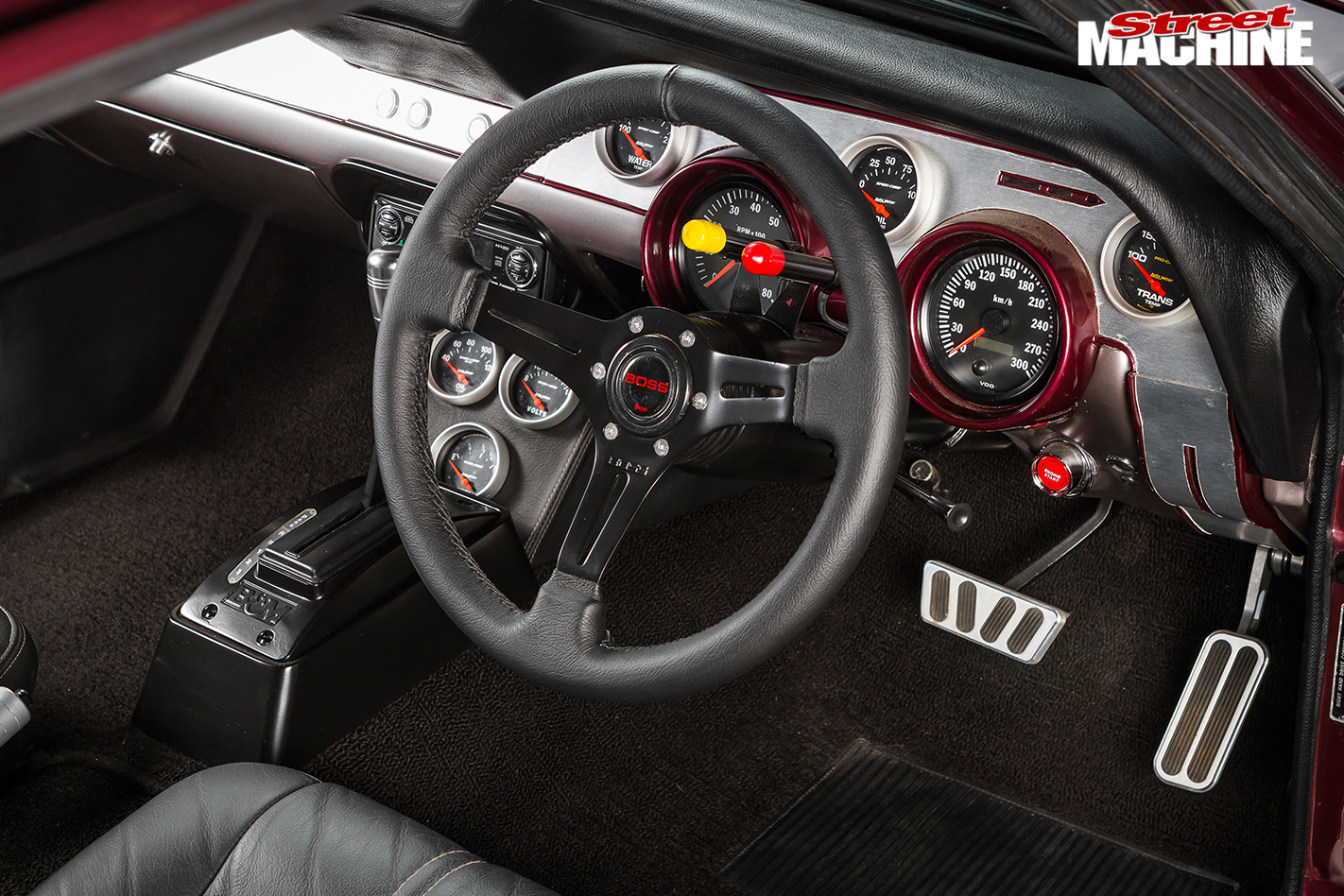 Adrian sums up the car’s build: “If we didn’t get it right the first time, we kept trying until we did.” Sipping mid-strengths on this summer evening, the pair admit to a few tense father/son moments along the way. “But as you can see, we always made up and had a beer,” Adrian says. 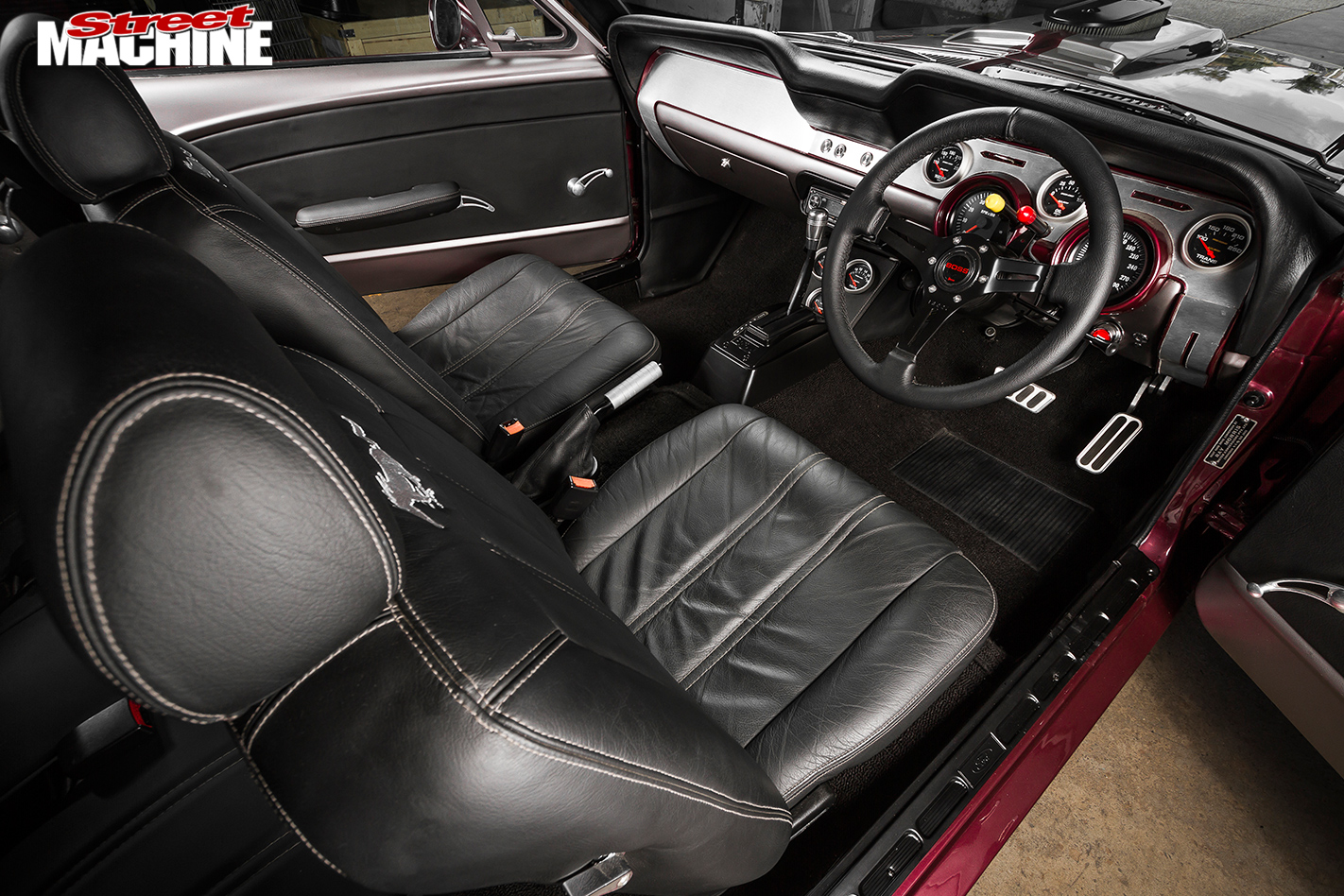 The classy dark interior is largely the work of Eastside Kustom Trim, also in the Hunter area. Later-model Mach 1 seats have been trimmed in an inviting charcoal/black leather with stitched highlights, and Mustang ponies have been embroidered into the seat backs. That might sound cheesy, but take a look at the pics – it looks great. 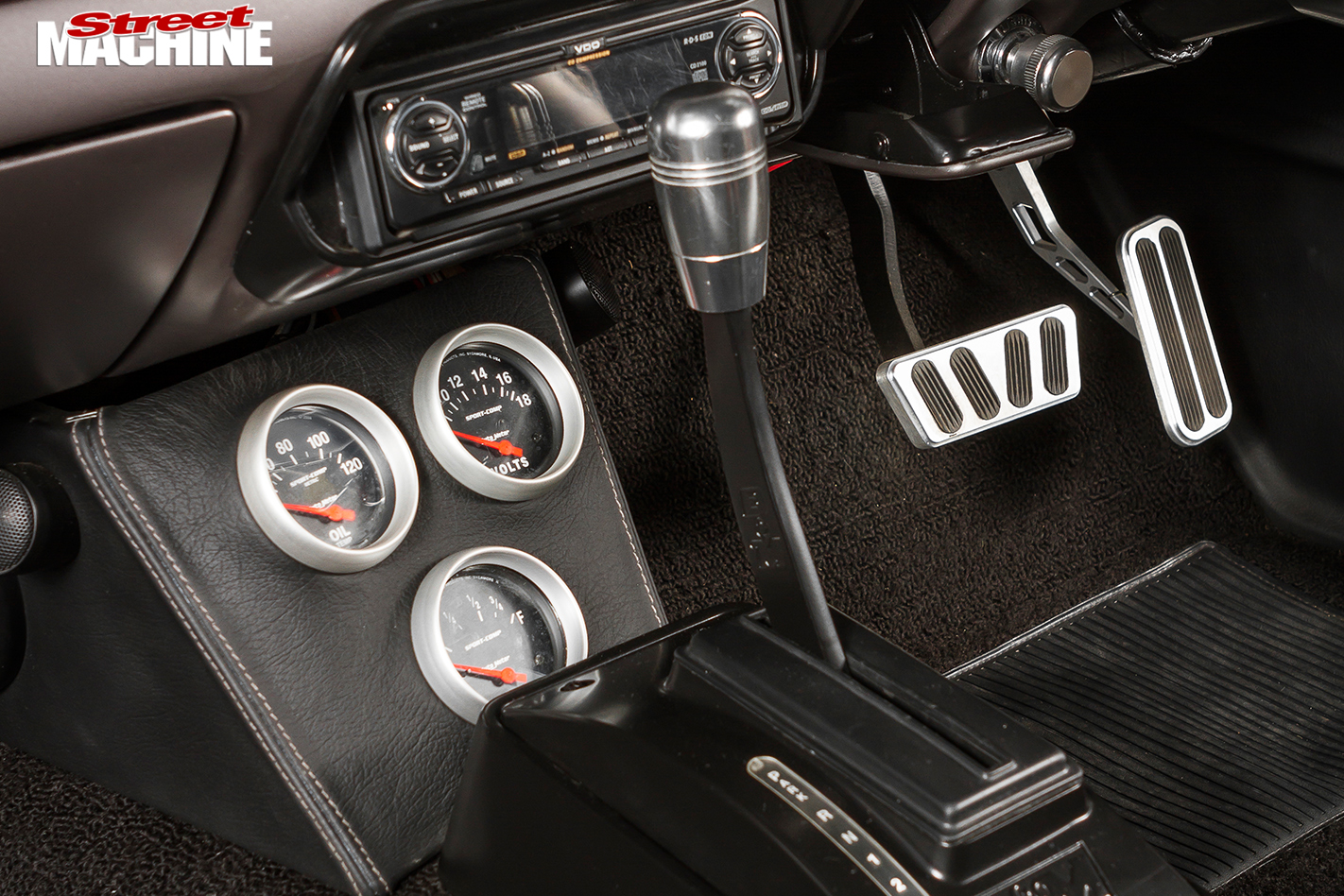 The motor is a 451ci Ford Windsor tall-deck V8. Built by Sydney’s Big H Racing on a rock-solid aftermarket Dart iron block, it breathes through Trick Flow R-Series alloy heads and a big Holley. The fat pipes – the reason for the spring tower slicing – are big two-inch extractors that dump into a dual 3.5-inch system, with outlets under the rear floor for events. Power is 710hp at the fly on from-the-drum brew. 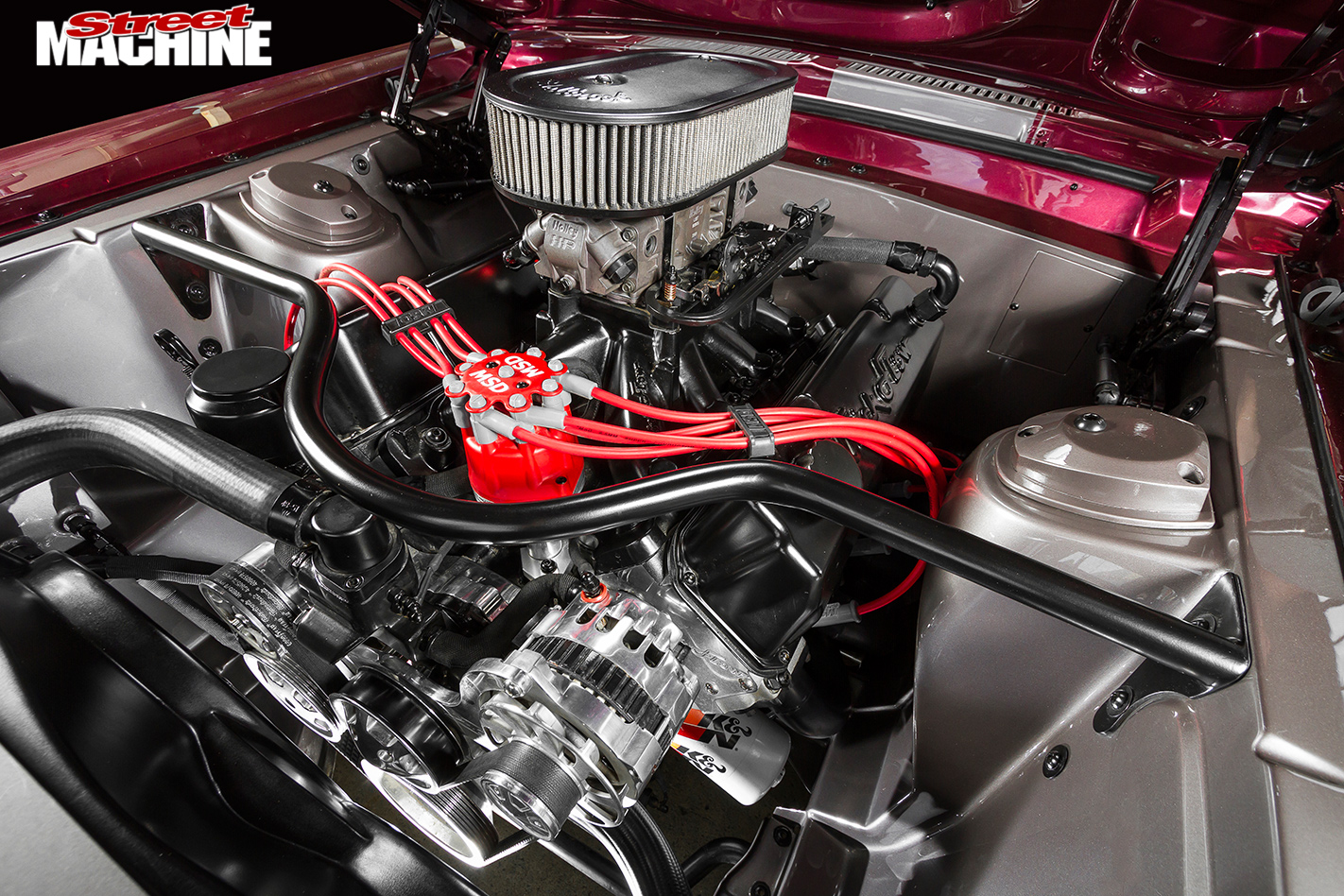 With around 550 ponies, the Big H-built alloy-headed, Dart-blocked tall-deck Windsor is almost too much motor for the Mustang. The boys are considering building a more modest cruising engine and putting the current donk in an XY ute that's stashed in storage

Terry and Adrian didn’t quite have it ready for Summernats 28 at the beginning of 2015, but managed to get it to Powercruise. Then it was off to the Nostalgia Drags, where the car proved to be a stout performer, pulling a 10.7 with Adrian backing off the loud pedal to coast over the line; as many of us know, anything quicker than a flat 11 seconds means a car has to be ’caged and meet higher safety regs for drag racing. 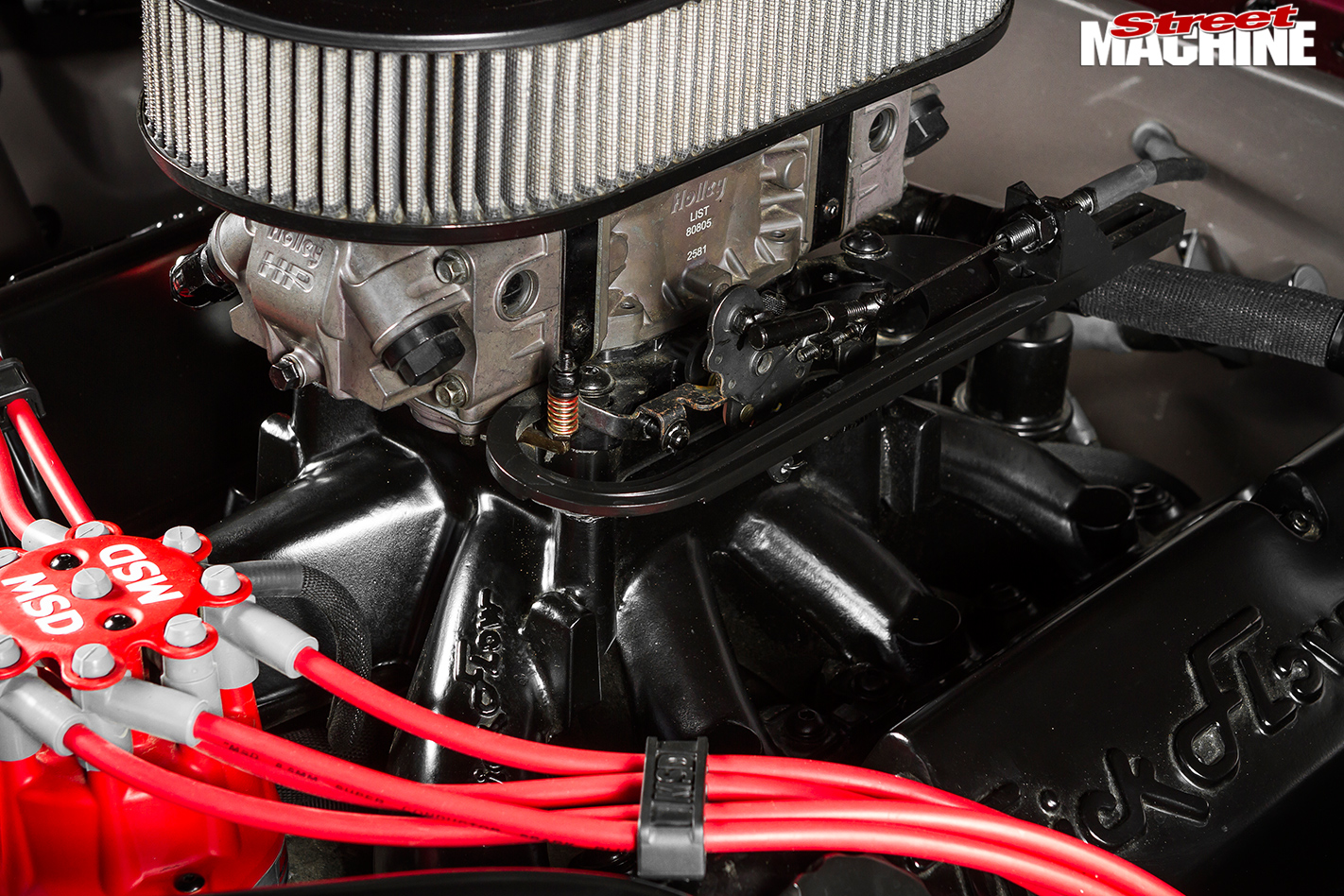 “After that, we brought her home, pulled it apart and put it back together for Summernats,” Terry says. And yes, even with a nine-month build schedule between early 2015 and Summernats 29, Terry and Adrian were still bolting bits on the week before Summernats. But it was all worth it; the car received the street-class Top Engine Bay and the 2nd Top Coupe trophies. 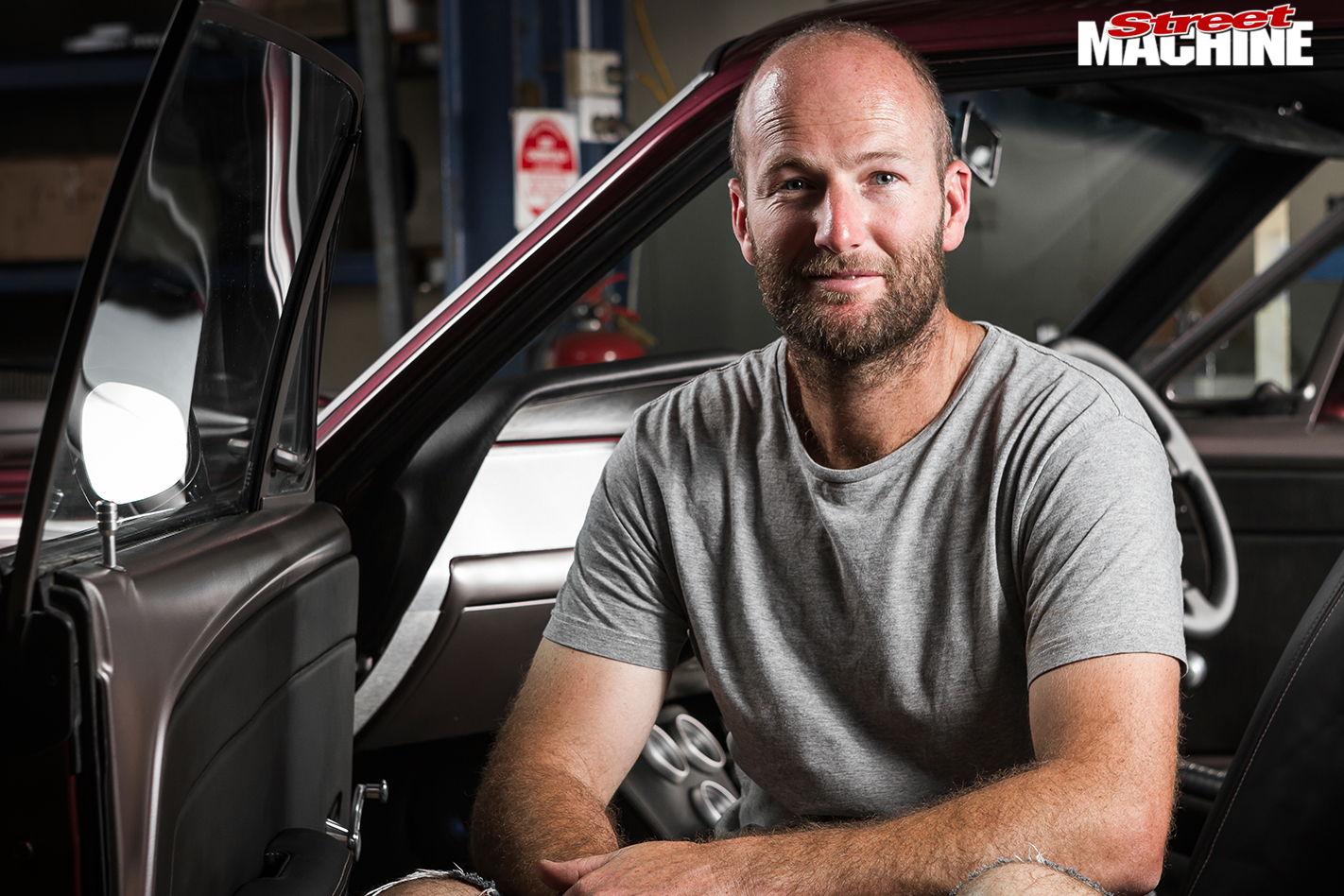