JAI and Corrina Schluter have been drag racing together for the better part of 30 years, but their XC hardtop (SM Fords #8) was way too mental to do double duty as a street car. “We got to the point where we were sick of having a race car that sat in the garage – we couldn’t go for a drive in it or enjoy it,” says Jai. “Events like Drag Challenge are really cool and there’s a new direction in racing, so we thought we’d make a change.” 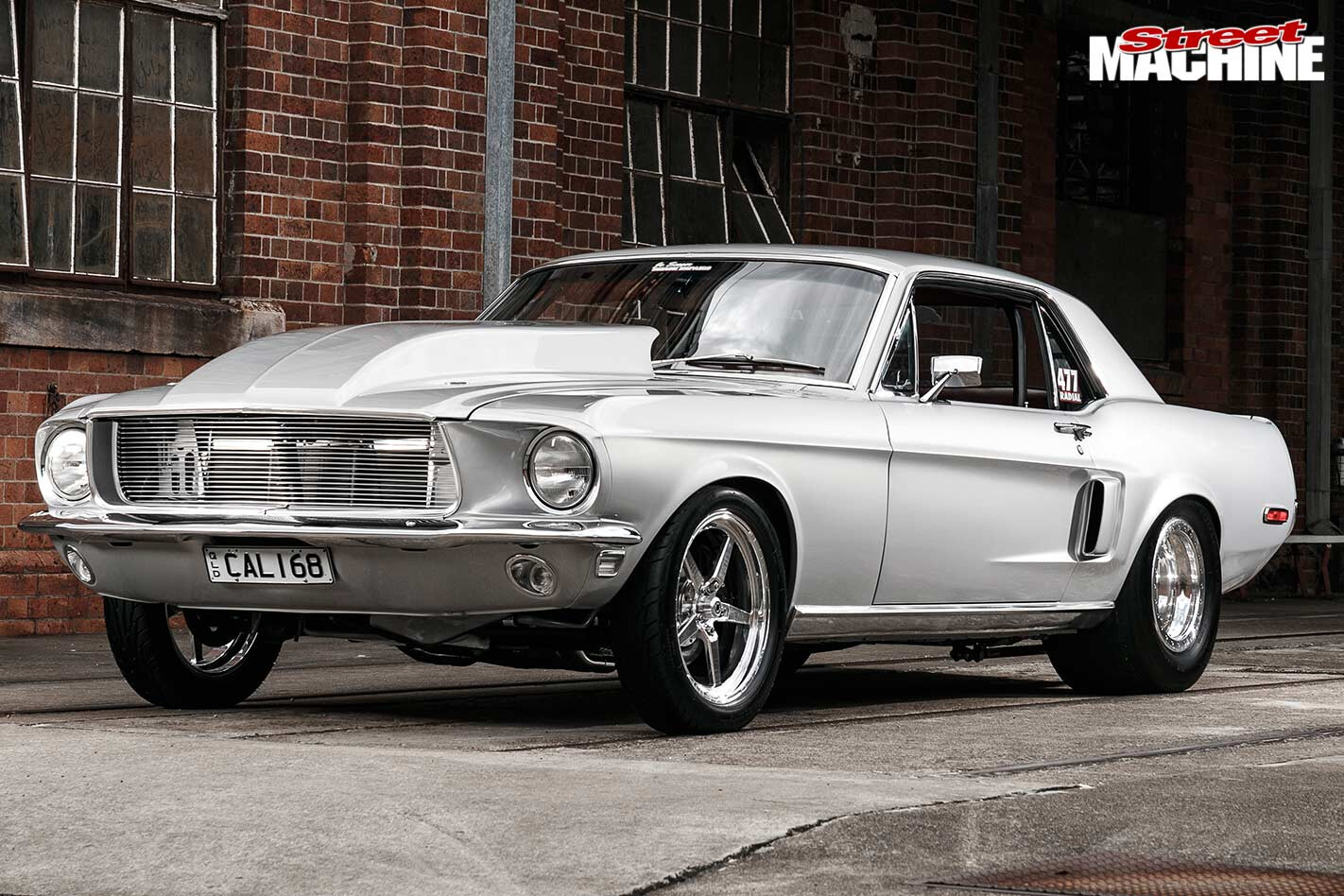 So the beloved XC made way for this ’68 California Special Mustang, which Jai had been coveting for years. “This car had been around Brisbane for some time with a few different owners,” he says. “When we bought it, the motor was hurt, the trans was broken and the car was in pieces. As soon as we got it home, we stripped it to nothing.” Unfortunately, though the shell was rust-free, there were quite a few nasty surprises lurking beneath the silver paint. “Someone had smashed the left front into a gutter,” laments Jai, “and whoever had fixed it did a sub-standard job. Brett and Matt at Jo Seeger Smash Repairs had to pull the whole car straight.” Somebody had also wanted it to be an Eleanor replica and had tried to fit a Shelby front and stripes. “It just didn’t look right – it had fallen out of the ugly tree and hit every branch on the way down,” Jai laughs. With the bodywork repaired to better than new, Brett covered the ’Stang in several coats of Silver Mink Mk2 from the Holden catalogue. The paint’s so bright it looks like burning magnesium when the sunlight hits it! 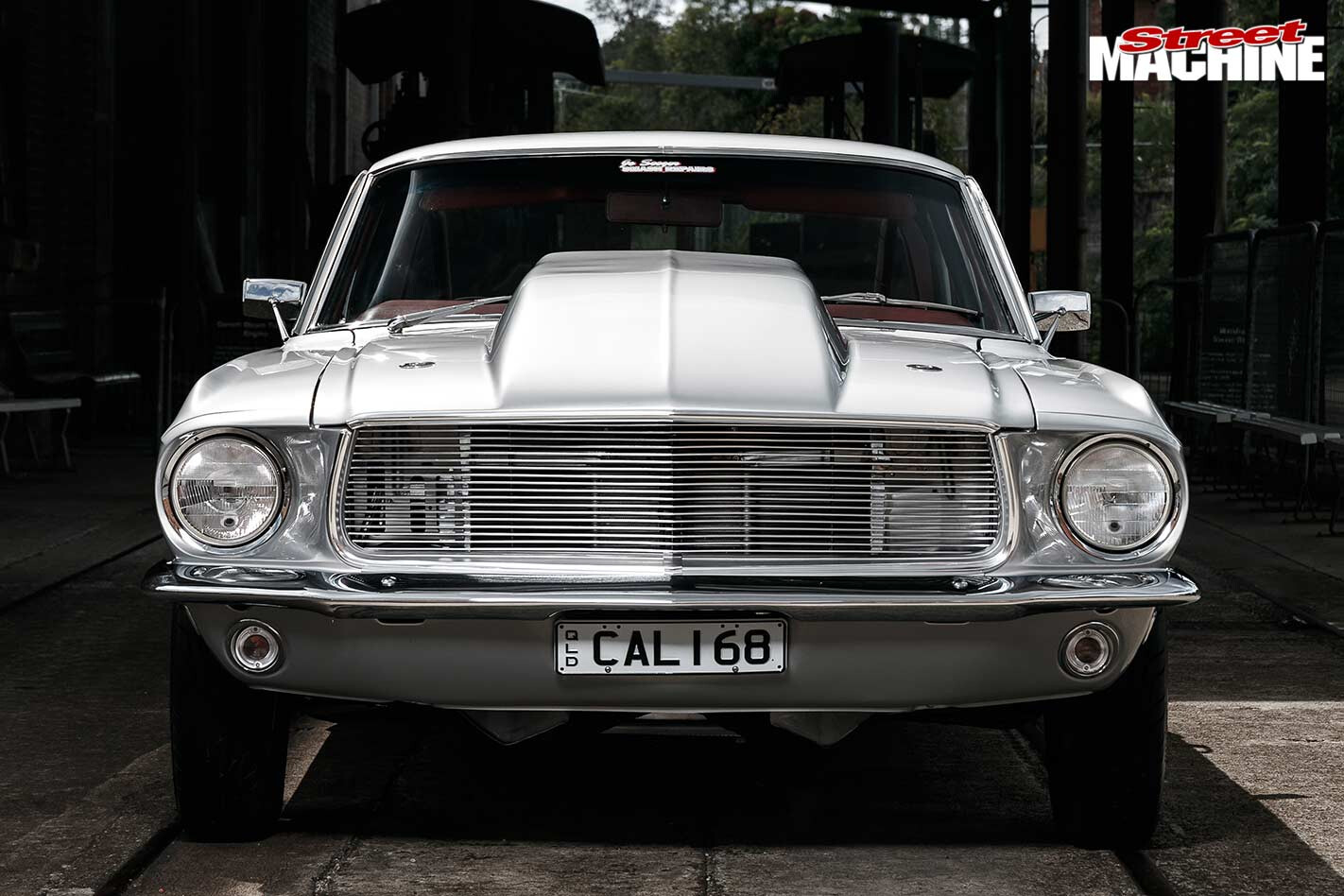 The interior was in a similar condition: “There was an obscene amount of wire in it; I literally wore out a pair of side-cutters removing it all,” Jai says. “Someone had cut up a foam Esky with a bread knife and stuffed it under the carpet to hide the chassis connectors!” Coastal Auto Upholstery replaced the tired seats and door trims with new-old-stock parts and custom-made Mercedes carpet to match, while Dave Hillman at Full Throttle Customs fitted a new ’moly rollcage with removable intrusion and taxi bars.

MORE1500hp twin-turbo 427 Windsor-powered 1965 Mustang on the dyno
Don’t be fooled by the nitrous bottle; this pony’s horses are all natural. “We didn’t expect the car to go as well as it does, so we’ve never connected the nitrous and probably never will,” says Jai. The MagnaFuel ProStar fuel pump may make a fair bit of noise, but it reliably provides more than enough fuel for the monster Clevo

That mean stance suggests that this pony’s rocking a few horses, and 750 naturally aspirated Clydesdales is about the correct number. While the bottom end is a pretty normal combination of a Scat stroker crank, H-beam rods and SRP pistons, the real magic is performed by the bits bolted on top. The CHI heads and intake were suitably fettled by Tony from Toca Performance, and he also specced the secret-squirrel custom cam to suit. Sitting on top of the big single-plane is a custom billet carby from RayJE Carburettors that’s capable of moving 1100cfm of air into the hungry Clevo.

The panels that cover the billet grille were knocked up in the shed just before Summernats by Rob Maddox. “I didn’t want too much black,” says Jai, indicating the smattering of polished aluminium and traditional red/blue AN fittings on stainless lines. The Moroso vacuum pump helps the 393 make its prodigious power

The ignition system is an all-MSD affair, and the burnt dinosaurs exit the engine through custom headers and a twin 3.5-inch exhaust knocked up by Dave. It’s pretty hard to miss the billet engine plate securing the Clevo to the car – another custom Toca Performance product. Keeping the monster cool in the Queensland heat is a large KV’s Race Fabrication radiator with Tein fans and an electric pump. 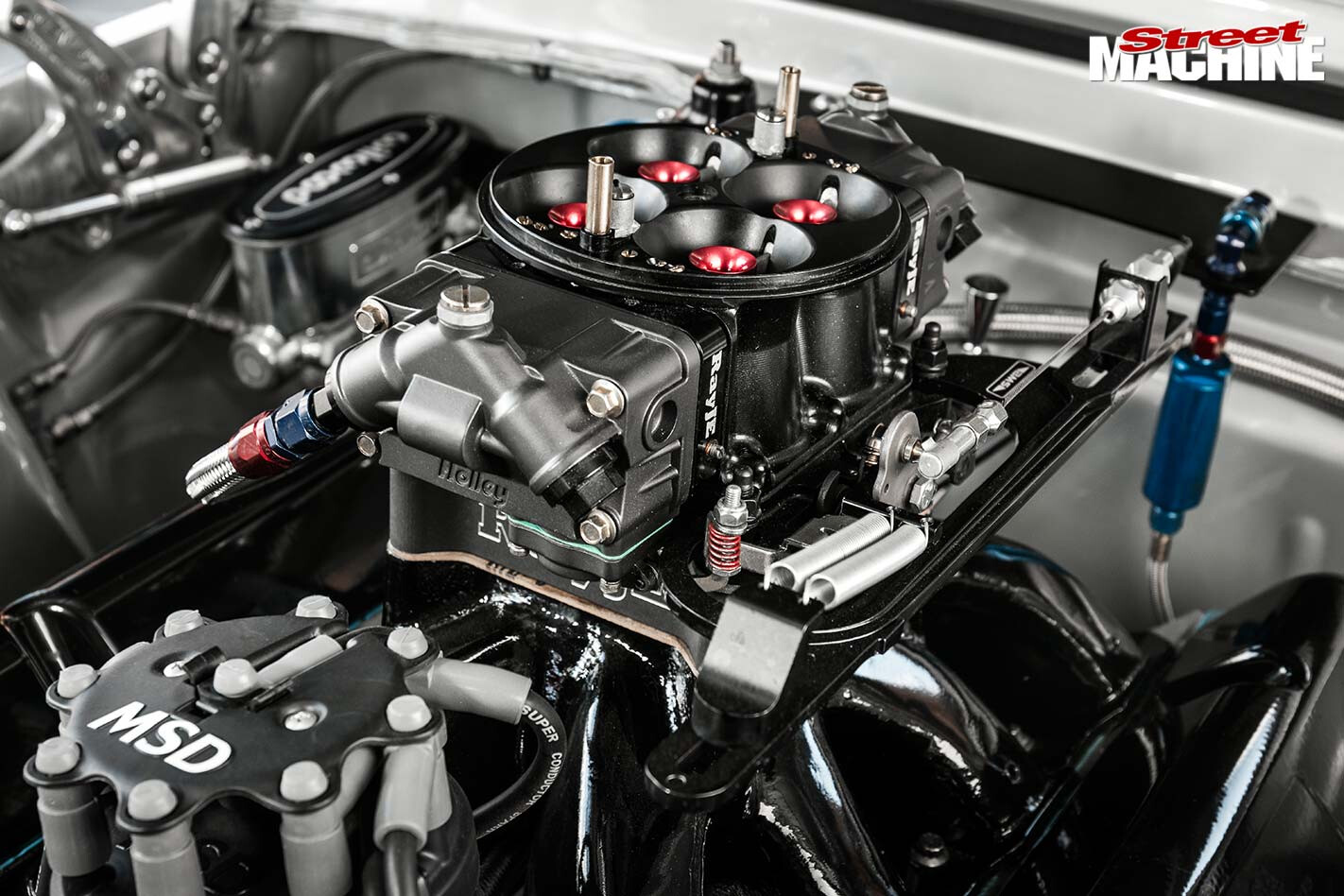 Sending power to the fat rears is a 6700rpm converter and a transbraked C4 with all the fruit built by Precise Automatics. Between those giant tyres is a Mark Williams fabricated nine-inch, with an alloy centre screwed together by Mark at Demon Mechanical. Mark also built the Wilwood brake set-up, which is assisted by a parachute at the track. With only a few runs down the strip since being finished, Jai’s Mustang has already smashed his original 10-second street car goal – how does 9.66@138mph grab you? UPDATE - the PB now stands at 9.106-seconds. 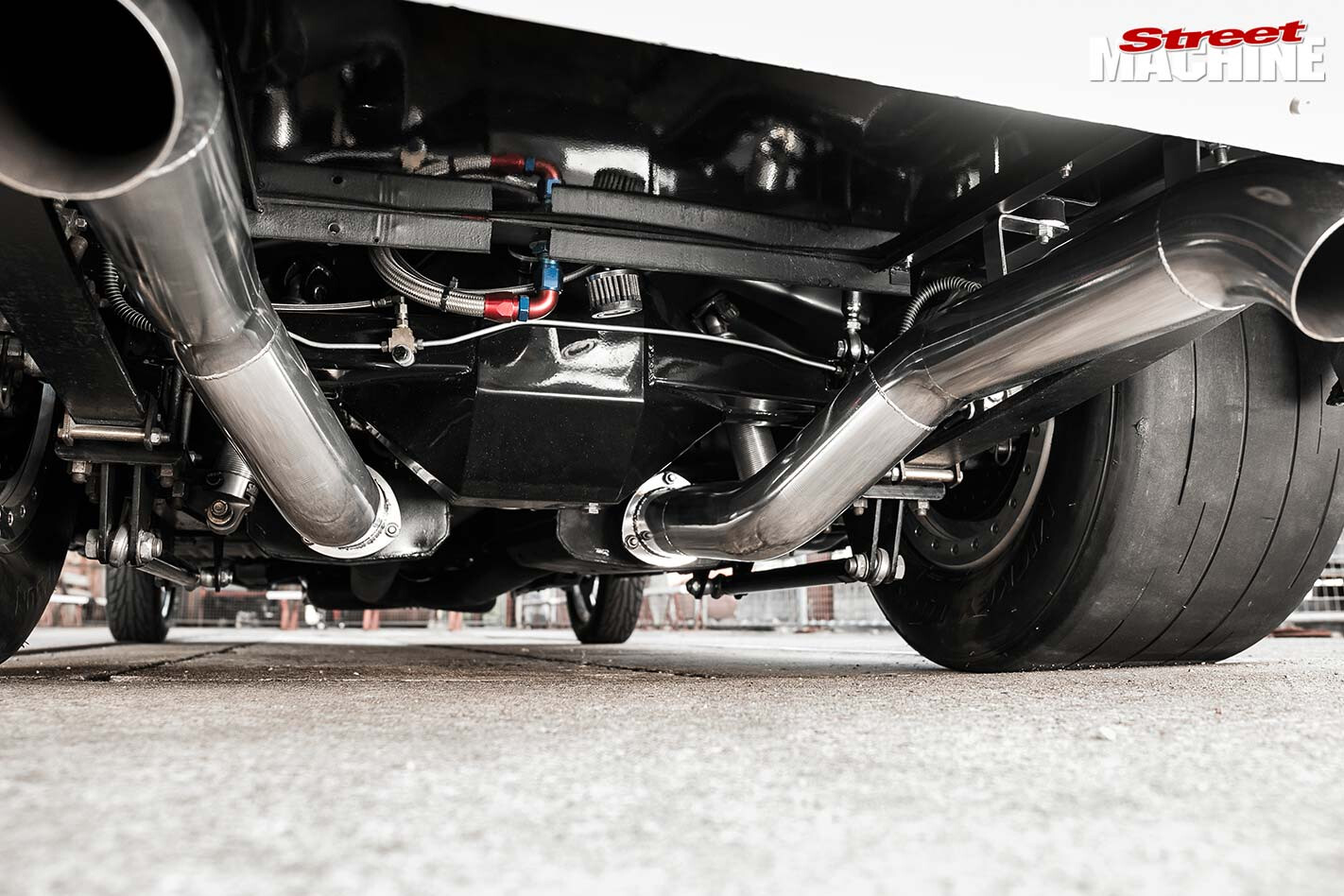 With the kind of numbers this thing sports, you’d be forgiven for thinking that it’s the sort of ‘street car’ that only sees the road once in a blue moon, and then only if the weather’s pristine. Not so, says Jai: “We all jump in it at least every fortnight and go out for coffee or dinner or go to a car show. It’s actually pretty pleasant to drive, even with the big converter, big pipes and big gears. It’s a nine-second street car, so I think you’ve just gotta live with a bit of noise.”

Other than the go-fast bits, the interior’s pretty much as Henry intended. A fair chunk of the Auto Meter catalogue is fitted into the factory gauge positions and under the dash, while the five-point harnesses and rollcage let you know that this is a pretty quick machine

Halfway through the 11-month build the Schluters were offered the chance to unveil the Mustang at Street Machine Summernats 32, and were rewarded with a place in the Elite Top 60 and Top 18 in the Grand Champion finals. “It was a really cool experience, especially since we didn’t build it to win trophies,” says Jai. “The best award is just being able to jump in it and drive it.” 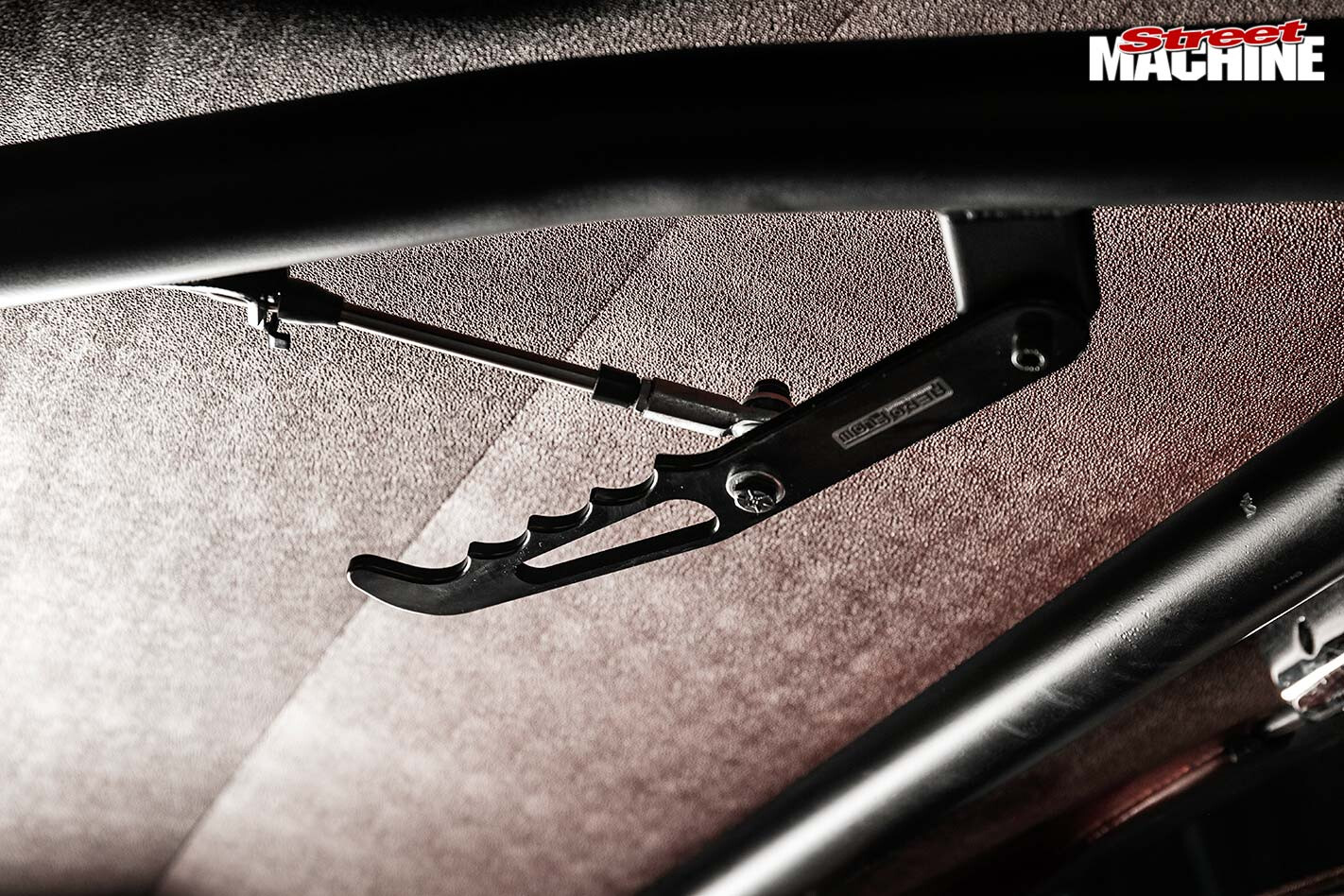 FAST FAMILY
THEY say that a family that races together stays together, and the Schluters definitely epitomise that ideal. Jai and Corrina built and raced their XC together for 25 years before the Mustang came along, and their daughters Taylah and Bobbie haven’t managed to escape the racing bug. “Corrina’s my rock, my best friend – if we can’t enjoy racing together then there’s no point doing it,” says Jai. “We’re about to build an XR6 Turbo for her, and Taylah’s got an XE Fairmont that she’s getting ready for a turbo engine. Bobbie used to race Junior Dragsters and likes the computerised stuff like datalogging and programming the MSD. Hopefully we’ll have the three cars ready for Drag Challenge so we can compete as a family.”