IT’S been a long time since I was excited about seeing a ‘modern’ movie, and I can happily report that Ford v Ferrari did not disappoint. 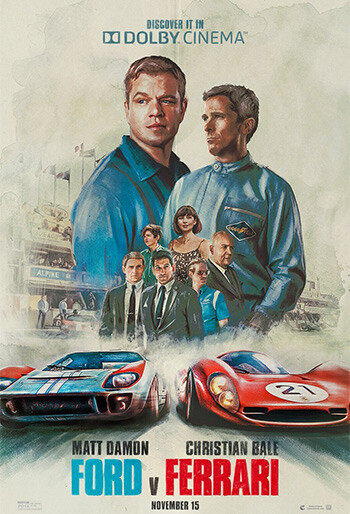 Shelby is tasked with making the seemingly impossible happen: a Ford victory at the 24 Hours of Le Mans. He recruits the abrasive Miles as his key driver, and the pair, along with the Shelby American crew, battle the odds to develop and refine the Lola Mk6-based Ford GT40 into a reliable and capable race car.

The implied blank cheque and creative freedom promised to Shelby is soon disrupted by corporate roadblocks in the form of Ford executive Leo Beebe (Lucas) and his cronies. However, the now-famous father of the Mustang and visionary Lee Iacocca (Bernthal) runs point between the warring parties, helping to keep the program on track.

Director James Mangold has beautifully melded highly detailed and tense action sequences with superb character development throughout; this not only creates an extremely well-balanced flick, but adds a necessary human element to the whole ‘man and machine’ genre.

The main players are bolstered by a stellar supporting cast; however, it is Christian Bale’s portrayal of Ken Miles that steals the show – he even looks like the real Ken – and the genuine friendship between Damon and Bale off-screen is paramount in making their characters’ interactions believable.

Of course, for us gearheads, it is the cars that really matter, and whether it be the deliciously shaped classic sports cars or the appropriately placed, era-correct use of background iron, there is always something to froth over. YOU have two choices with Ford v Ferrari: join the purist whinger set citing all the film’s ‘historical inaccuracies’, or immerse yourself in an enthralling, tense and sometimes funny film. After all, it’s a movie, not a documentary. I personally don’t care if creative liberties were taken to jam four years of real life into two-and-a-half hours; I came away from my viewing completely entertained, and educated just enough.

ACTION:
From test track to race track, the film bubbles over with big-revving, tyre-smoking, flat-changing perfection.

PLOT:
Chronicles the personal and corporate battles faced by racing legends Carroll Shelby and Ken Miles, along with the Ford conglomerate, as they battle Ferrari for Le Mans glory.

COOL FLICK FACT:
To recreate the 1960s-spec Le Mans circuit, the race scenes had to be shot at five different locations, with all cars correctly repositioned to ensure continuity.