When Brock Mahoney went looking for a John Goss Special XB Falcon, he never expected to find it in the Emerald Isle!

‘WILL travel for right car’ has taken on a whole new meaning for Sunshine Coast local Brock Mahoney. After finishing his show-stomping red XC coupe IN ENVY (SM, Sep ’14), Brock was keen to for a project that took on more of a ‘street’ role but had genuine sports lineage – namely an XB John Goss Special.

“My dad Kevin bought the red XC brand new in ’77, but nearly traded it on a blue John Goss Special not long after,” Brock explains. “So there’s a family connection there, but I just love them regardless. My only stipulation was that it had to be the Apollo Blue version and not the Emerald Fire green; it made the pickings even slimmer, but I just prefer the blue option.” 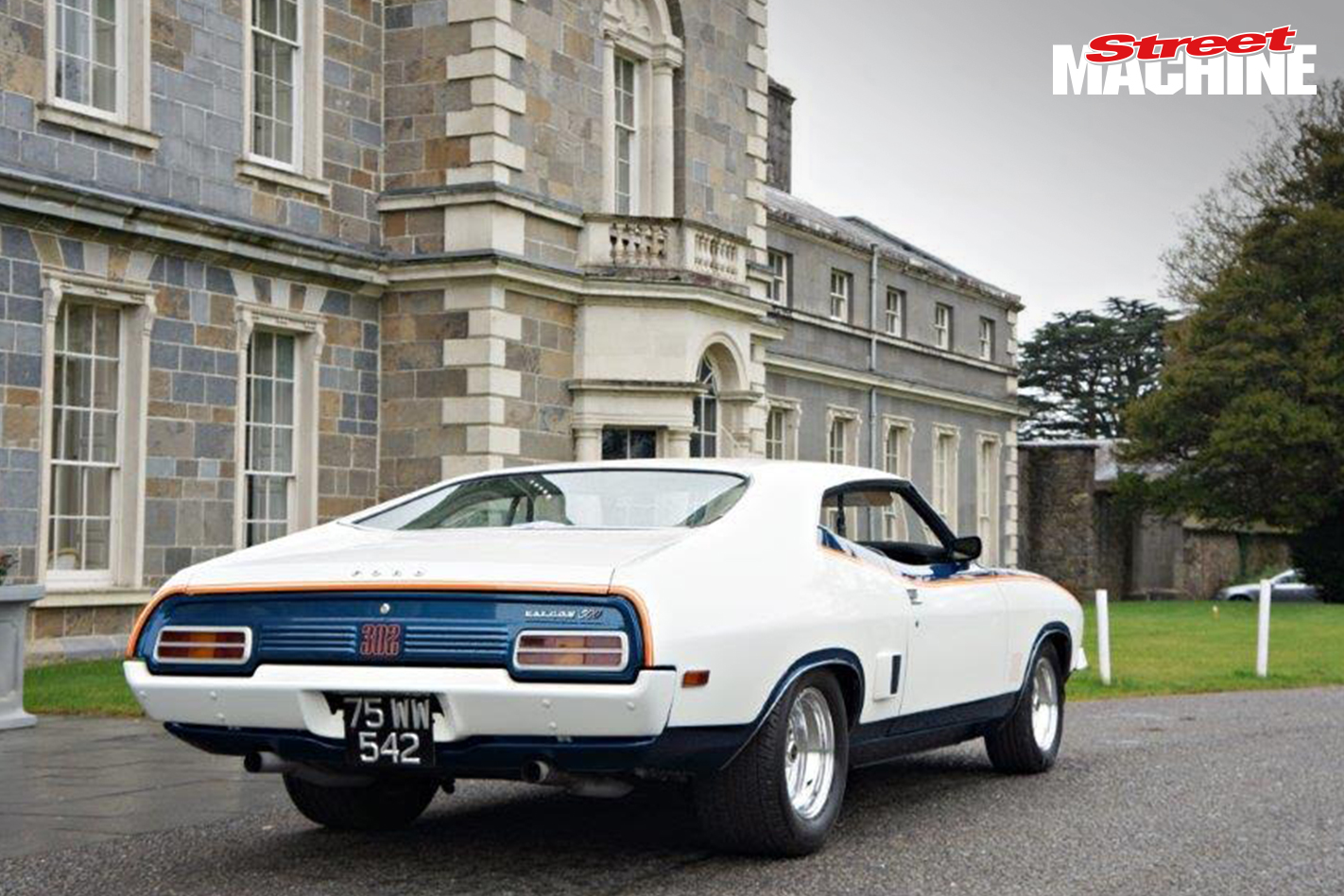 So the hunt was on and Brock put out the feelers for a suitable candidate. Around this time, a mutual friend introduced him to Ben Atkinson from Seven82Motors on the Gold Coast – another bloke very familiar with rebuilding his dad’s old hardtop – and he told Ben of his interest in buying a Goss.

“Brock found one for sale in Sydney,” Ben says. “I happened to be road tripping back from Victoria in a ’64 Impala, so Brock got me to swing by and take a look. It was the wrong car for his plans but definitely got the Goss fire in his belly well and truly burning.” 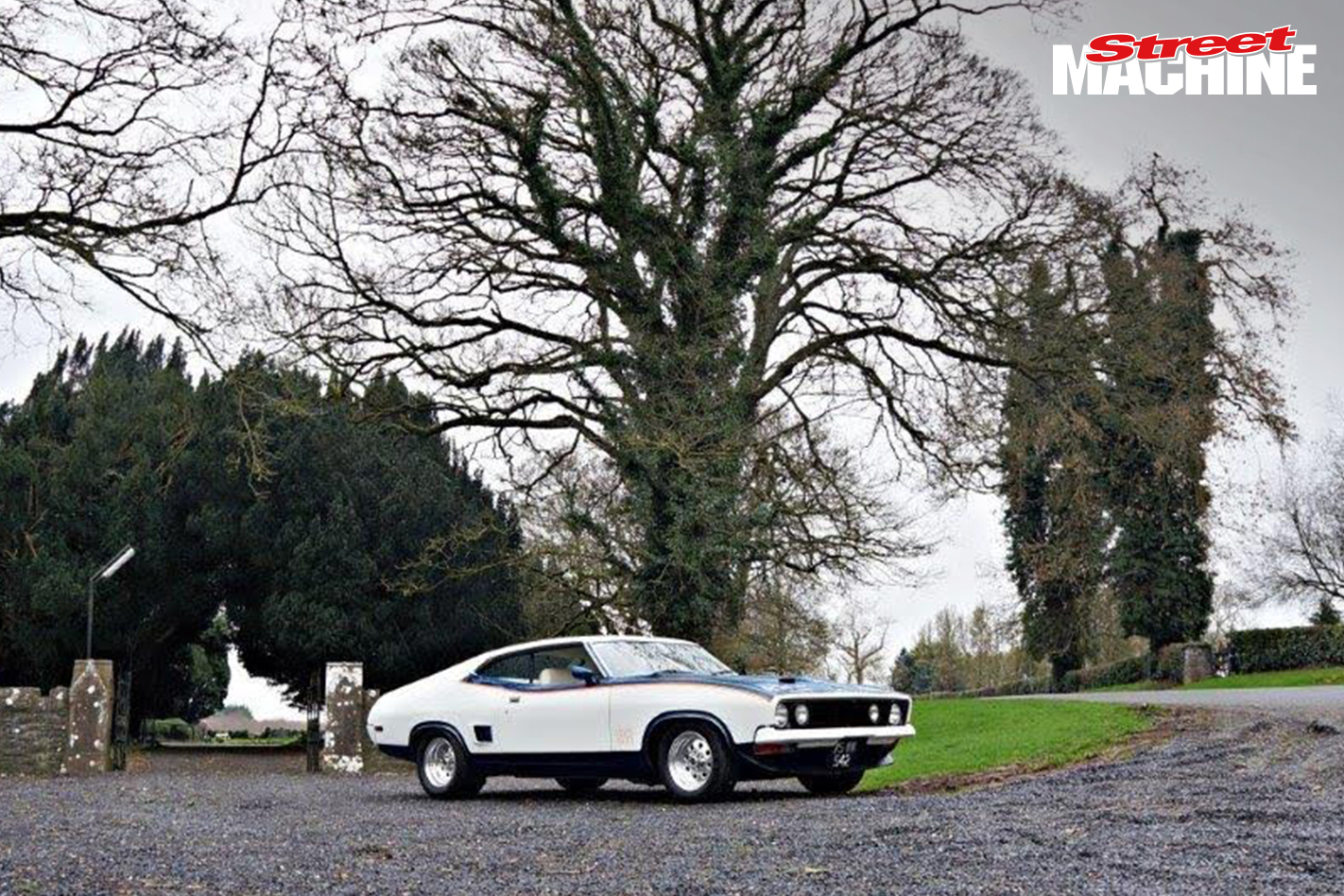 Brock was on a mission and it wasn’t long before he found another needing inspection. “Brock sent me a screenshot of an XB wearing unusual number plates followed by the message: ‘Do you want to go to Ireland?’ I didn’t have to think about it too much!” Ben laughs.

The boys moved quickly and were soon on a flight to the Emerald Isle. They were happy with the Goss – truly a pot of gold at the end of the rainbow – and the whole deal was wrapped up within a matter of days of it being first advertised. 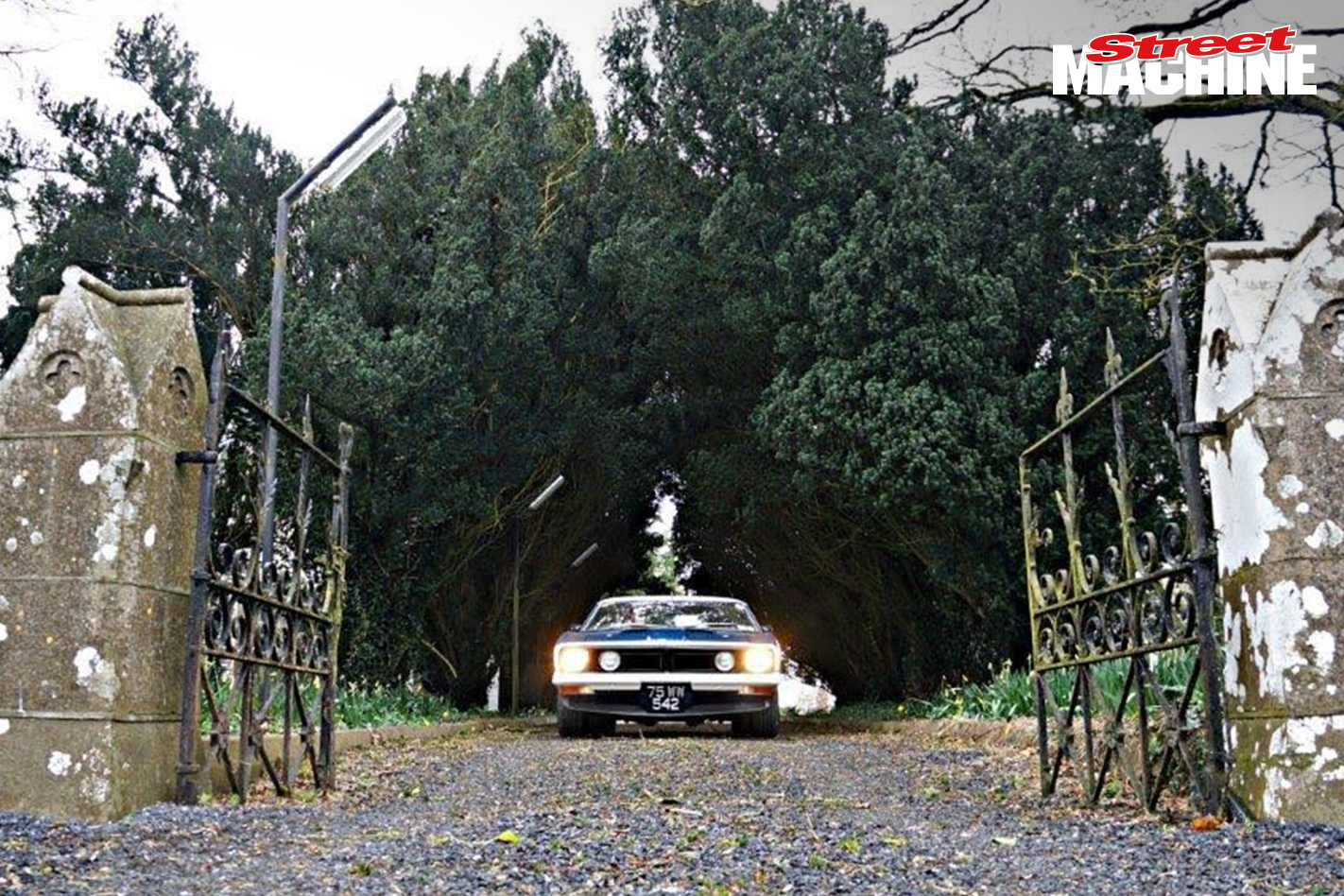 “It was sent to Ireland a decade ago and the seller, Tom, had owned it for eight of those years,” Brock explains. “He completed a ground-up rebuild for his wedding back in 2012, and fell in love with Aussie Falcons after seeing an XA GT at Bondi Beach while on holidays many years ago. Tom’s done an amazing job with the car and knows his stuff about these hardtops – he’d put many Aussie ‘experts’ to shame.”

The Irish conditions may not be the best for preserving classic cars, but the XB has lived a charmed life in a humidity bubble since its rebuild and is already en route back to Australia. 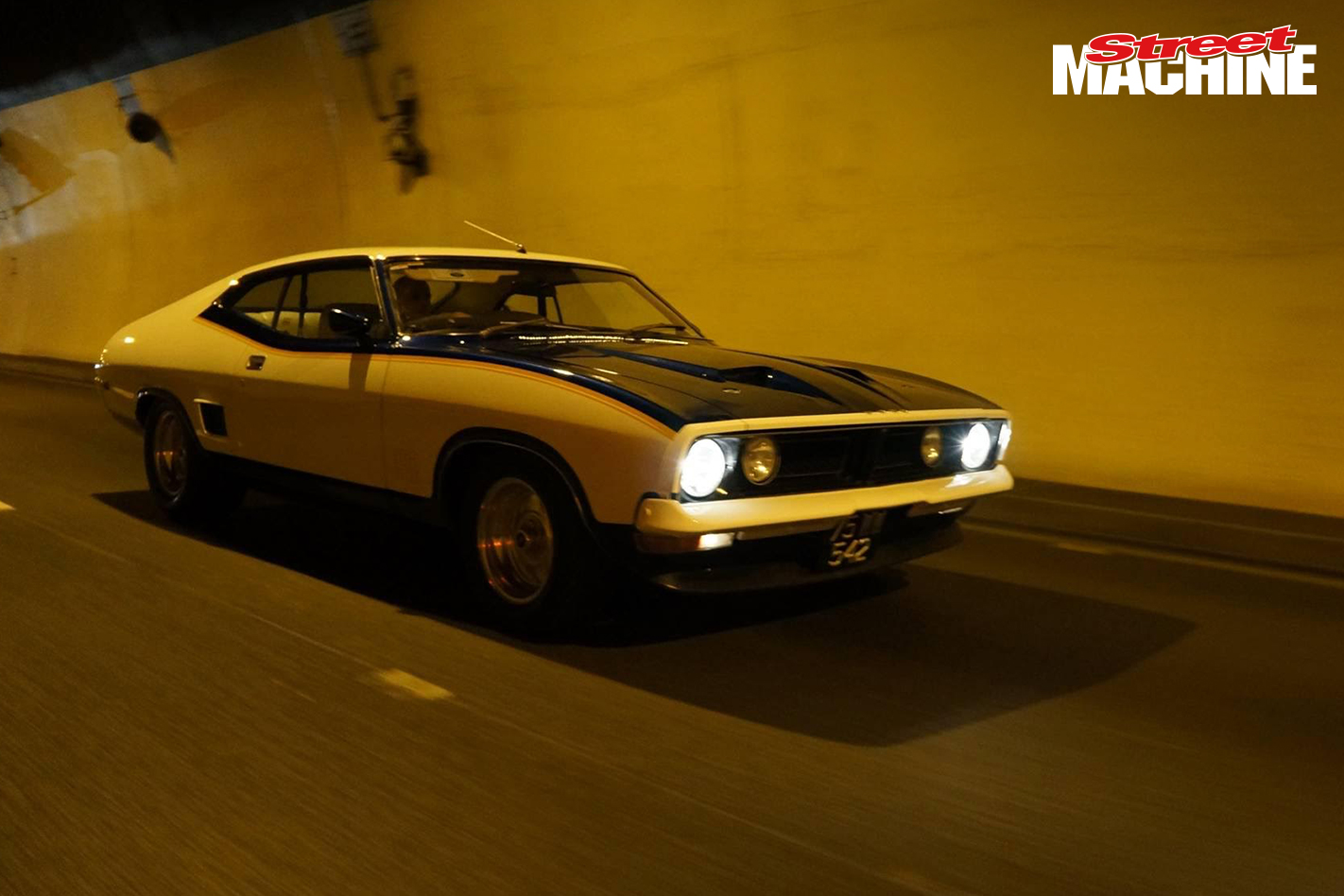 “We spent a few days hanging out with Tom and had a ball; he’s a great guy and the perfect host, and we’re trying to con him here for the 1-2 Hardtop Anniversary being held at Bathurst in November,” Brock says. “We drove it everywhere and have taken plenty of photos to document this phase of the car’s history. It really turned heads with the locals too. When factoring in the exchange rate, flights and shipping costs, it still represents good value for money when compared to what is available locally. It’s definitely been worth the exercise and has got me the car I wanted.”

The 351, T5 transmission and Weld wheels may not be original, but plans are afoot to return it to the factory 302 and four-speed configuration. “Once it’s home it’ll go to Ben’s shop to get some of the authenticity elements back up to scratch,” Brock says. “I already have a modified version with the XC, so a stocker will give me the best of both worlds.” 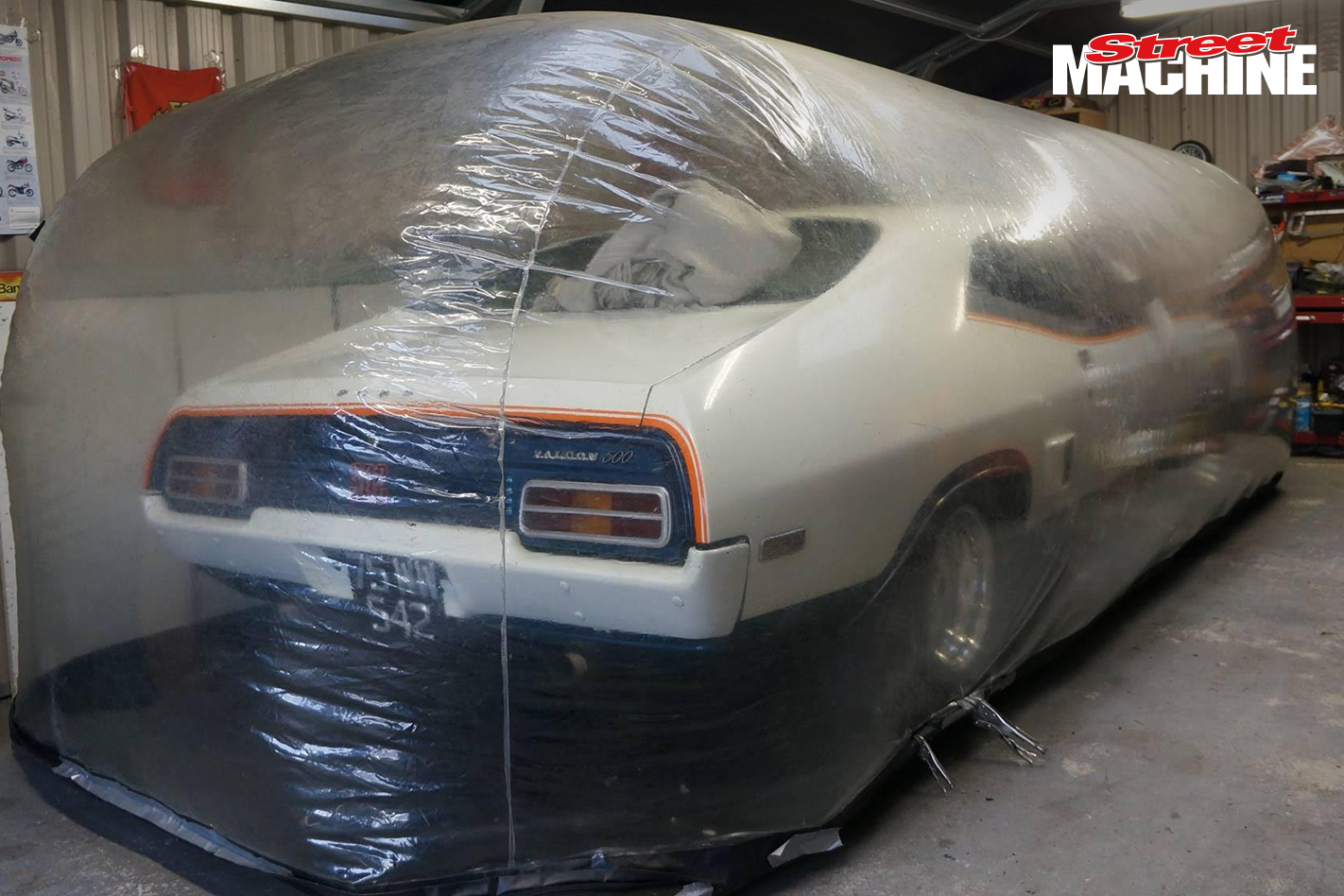 Brock’s XB is one four Aussie Falcon coupes to have spent time in the land of the Leprechaun. Three were sent over from Australia a number of years ago and one came in via England. A purple-coloured coupe and the Goss have made it back to Australia, while the two left are both black cars; one is apparently pretty tidy while the other needs some work. The XB/Mad Max connection is strong and has definitely seen a number of Australia’s finest turn up in some unusual places around the globe.

When I quizzed Brock as to whether Emerald Fire green would actually be the more appropriate colour for a now-expat Irish Goss, he was quick to nip that in the bud: “No chance; it’ll be back home soon mate, so Apollo makes it a true-blue Aussie once again!” 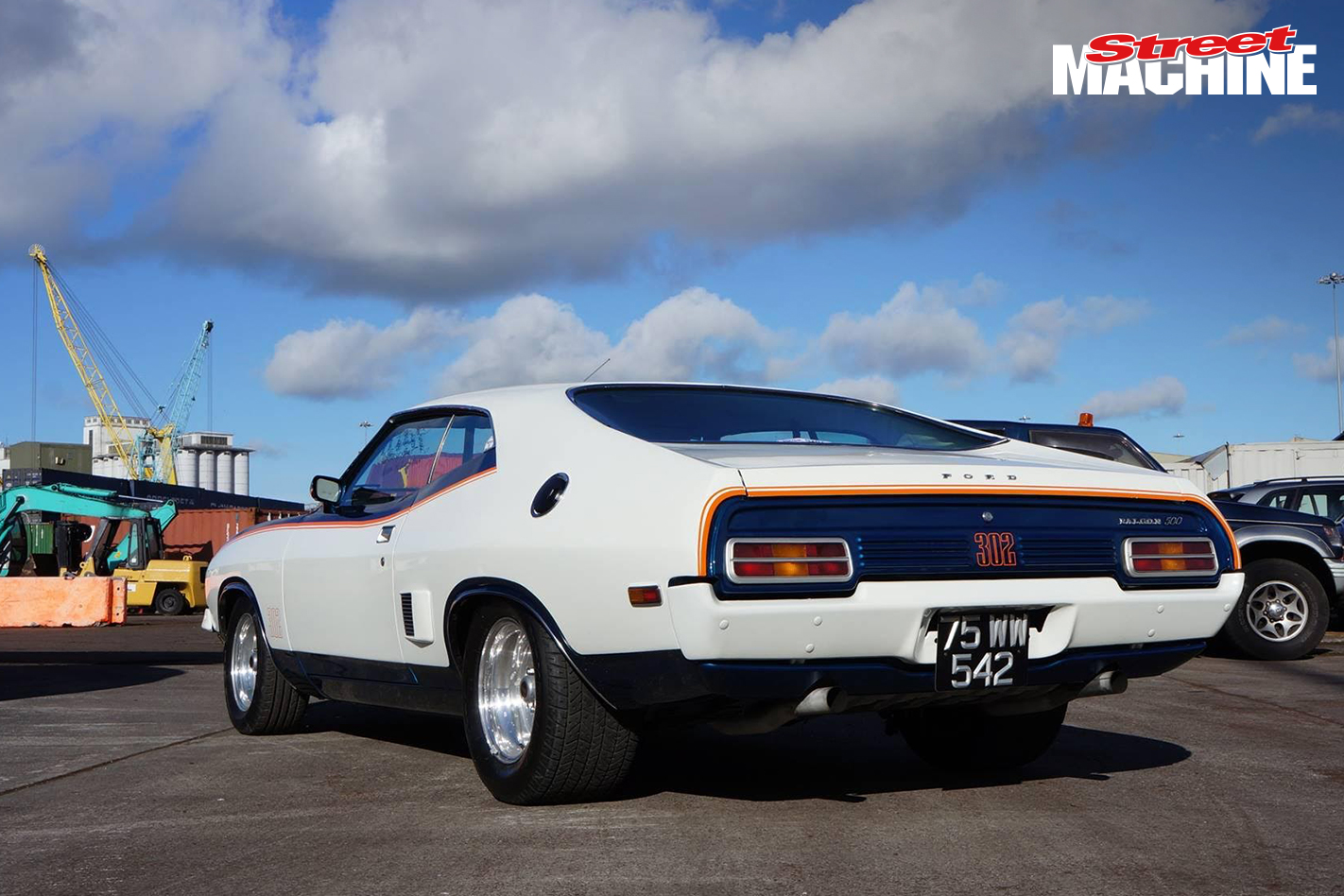 The exterior remains pretty much Goss-spec save for the grille treatment and wheels, but the 302 and four-speed have made way for a 351 and T5 combo 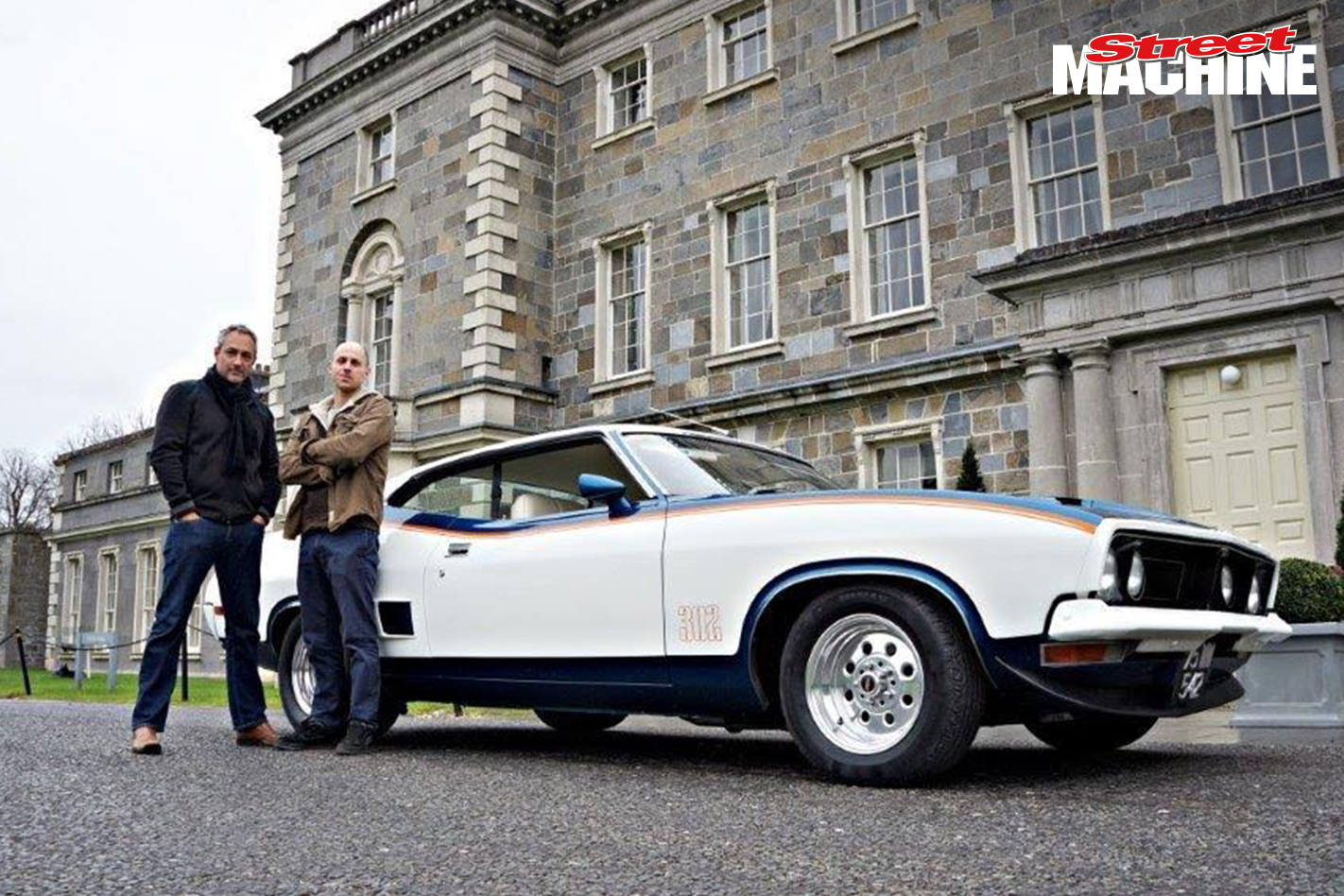 New owner Brock (left) and the Falcon’s Irish former owner, Tom, who completed a two-year rebuild in time for his wedding back in 2012 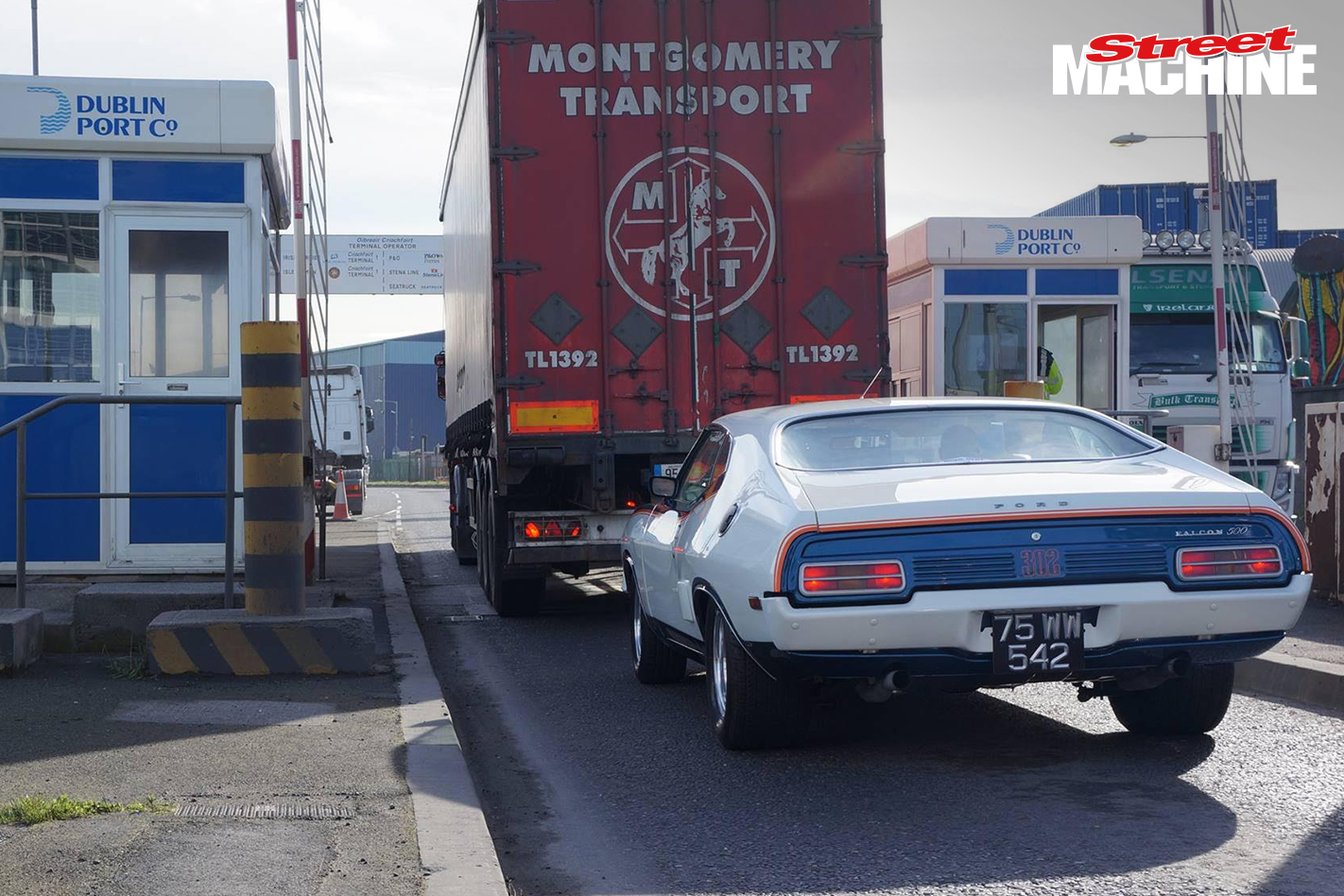 Dublin Port is the last place you’d expect to see an XB hardtop, but the swoopy Falcon drew plenty of admirers. The Goss will be back on home turf after a short detour via Belgium 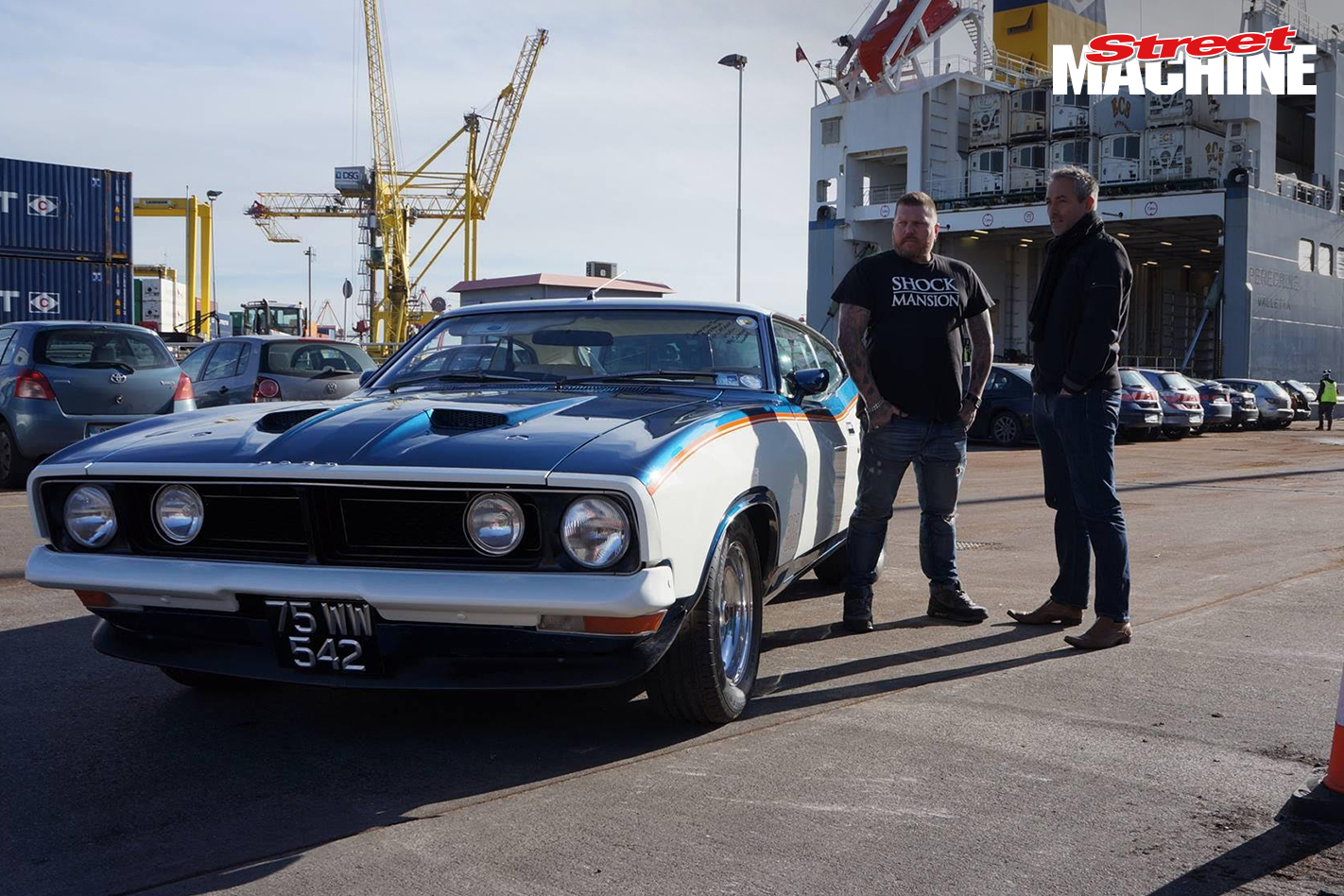 Seven82Motors’ head honcho Ben (left) and Brock at the port, reflecting on a whirlwind five days. The whole deal was wrapped up in less than two weeks from when Brock first spied the ad in Australia 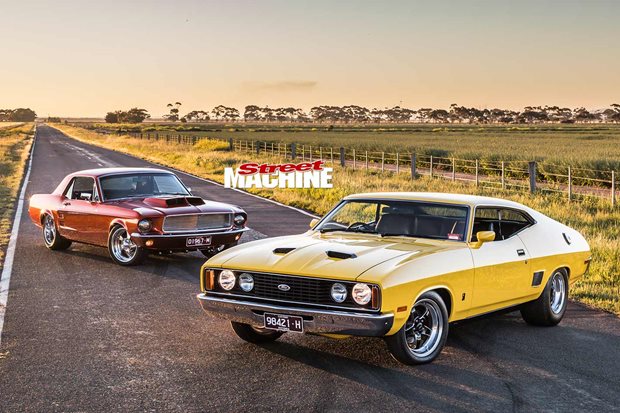 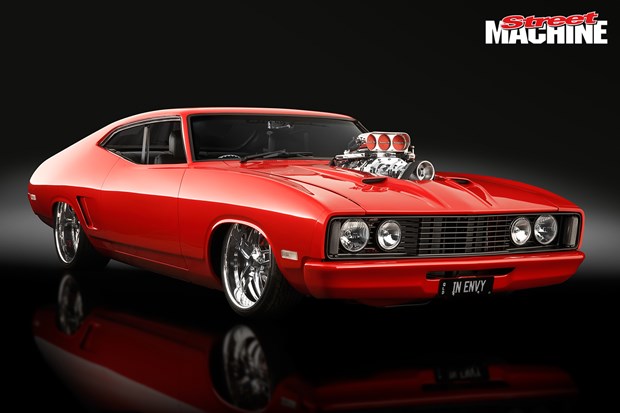 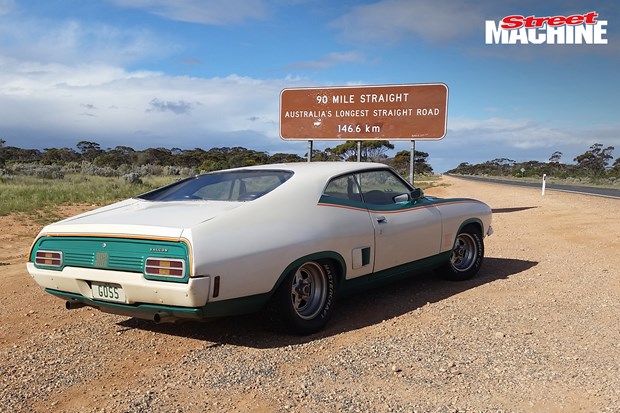 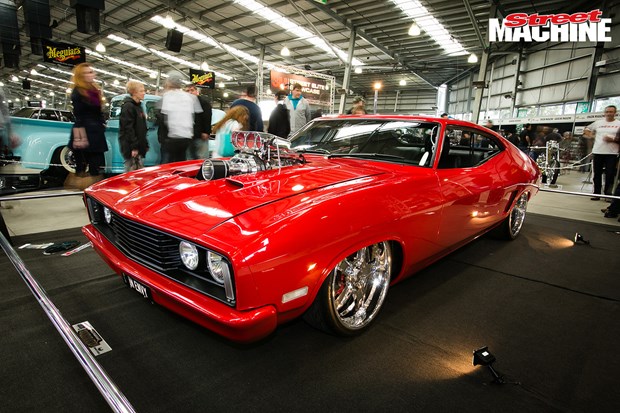