With huge tubs and tyres out back, this stunning, show-quality Ford XP Falcon sedan is ready to hook up an honest 600hp for a 10-second pass

PAT Manariti has hit all the buttons with this classic Aussie street machine: drop-dead show car, potential 10-second drag racer, weekend family truckster. This XP fairly screams its high build quality and old-school pro street style, and is a remarkable achievement for a first-time builder, even if it took him two goes. 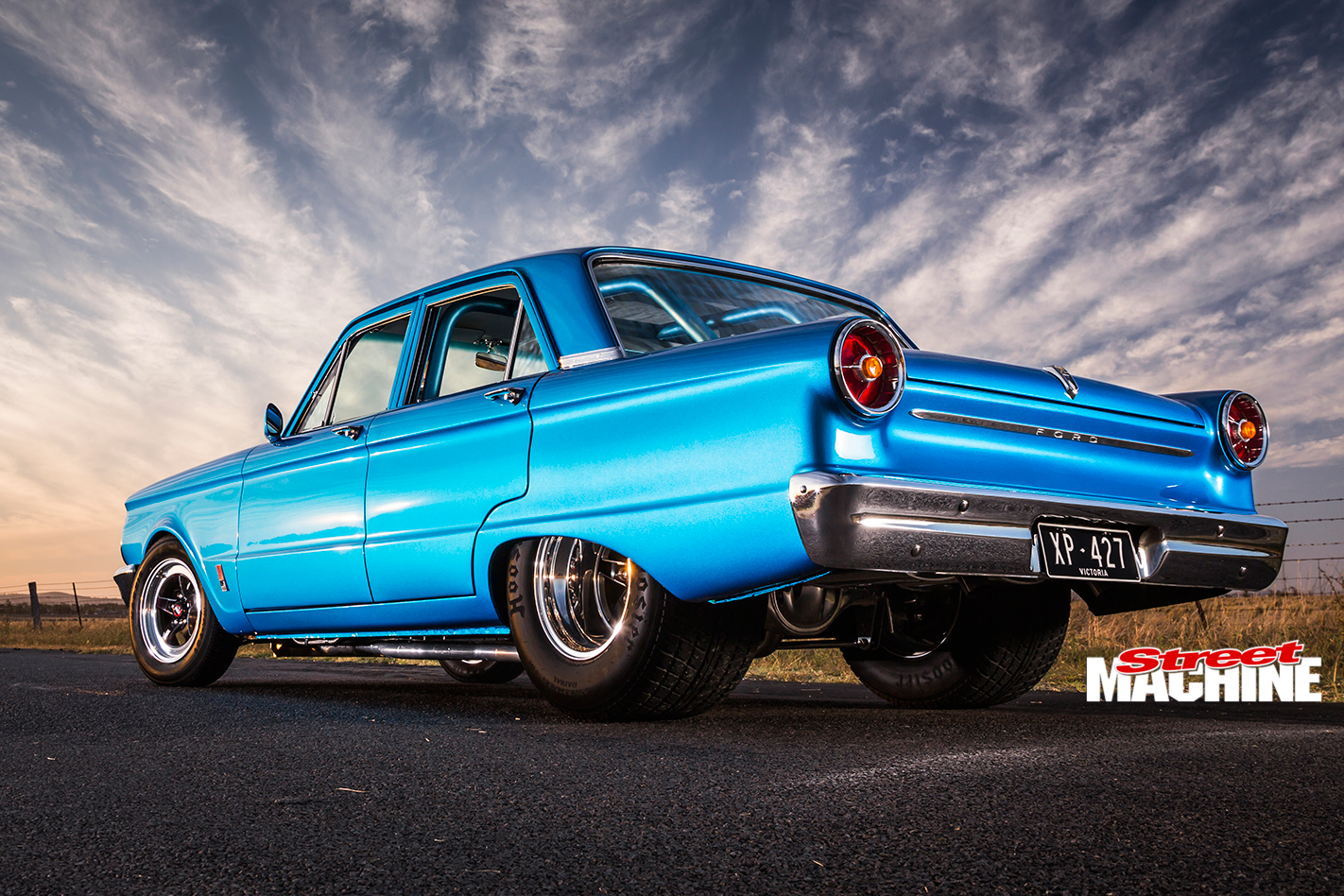 Pat picked up the ’66 Falcon bog stock in good condition from an old chap in St Albans, Melbourne, in 2005. He has always been a Ford guy, but had never before had a crack at building a street machine. “I love the shape of the XP and there’s not too many sedans around,” he says. Inspired by his brother Mick, a longtime modified car guy known for his uber-tough 1966 Ford Galaxie (SM, Mar 2011), Pat painted it blue, ditched the six for a 351 Windsor and had McDonald Brothers Racing mini-tub the rear to fit over fat 10-inch rims. He modified the rest to suit and drove it like that for three or four years. But the urge to go even wider at the back snowballed into the road warrior you see now. 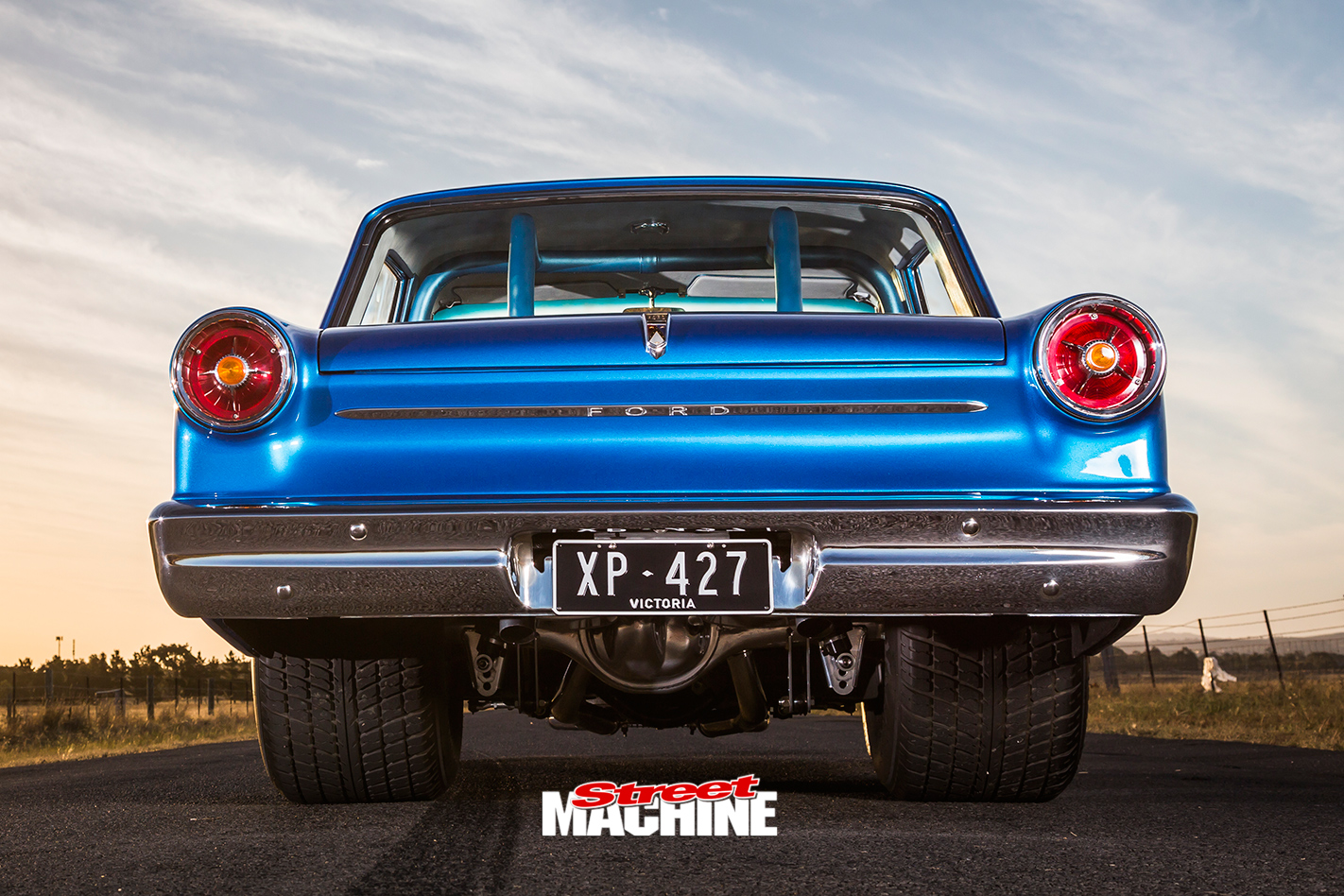 One thing always leads to another. McDonald Brothers was again called upon to put together a fully tubbed four-link rear end to fit over the 15x12in Weld rims, fitted with 15.5in-wide tyres. The lowered stance then required a fabricated transmission tunnel to clear the driveshaft. Then a desire to fit an engine worthy of the tyres had Pat thinking about extractor clearance, which led to notching the front suspension towers and a full RRS conversion. The big tubs meant a new rear seat, and subsequently a new interior. A new dash had him repainting the whole damn car. In for a penny, in for a pound! 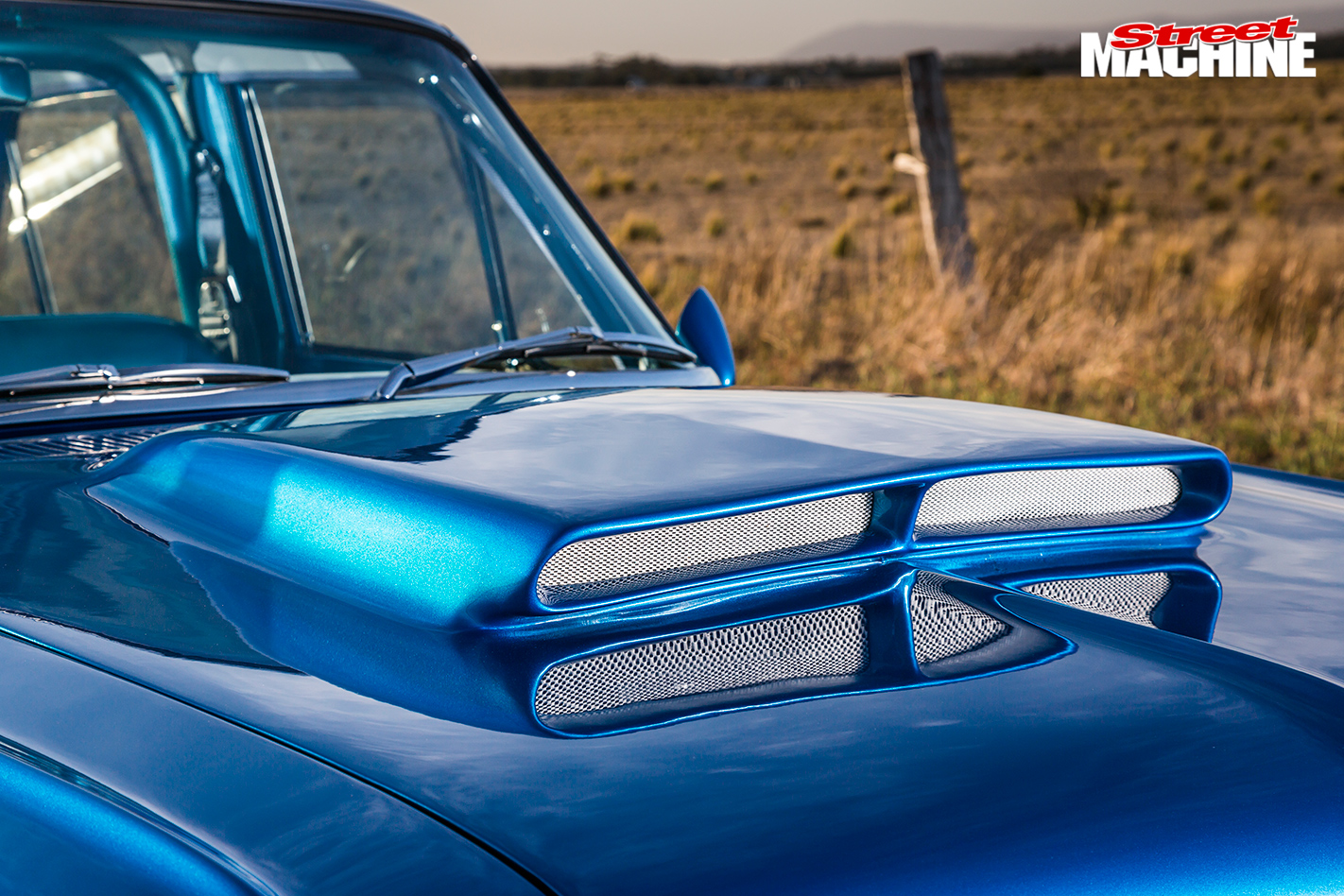 There’s no point walking the walk if you can’t talk the torque, and Pat’s XP is not short of squirt. Colin Grech of CG Automotive Repairs in Avondale Heights artfully concocted a red-hot, normally aspirated 427 Windsor from a Dart Sportsman block, Scat crankshaft and AFR cylinder heads that has seen 601hp and 545lb-ft on the engine dyno. A single 850 Holley Ultra carb and MagnaFuel 500 pump feeds the 98 unleaded from a fuel cell in the boot into a polished Edelbrock Super Victor manifold for an ideal blend of high performance and traditional muscle car looks. Ditto the smooth-flowing, satin-finished extractors dumping into a pair of Magnaflow mufflers. 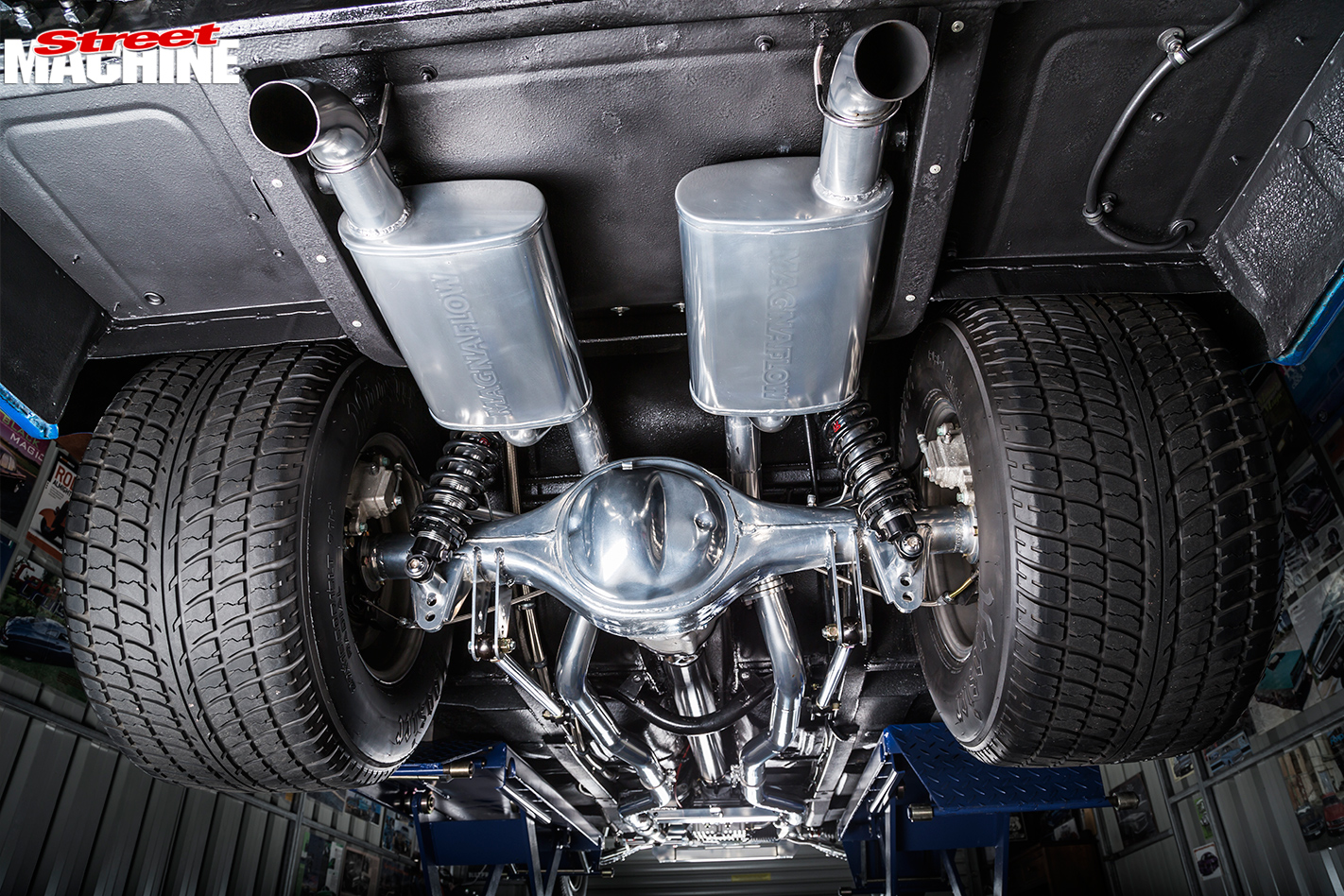 The car’s low mass – XPs weighed under 1200kg out of the crate – means it has the potential for a 10-second pass. Pat hasn’t raced before so he’s not fussed how fast he actually goes, but is keen as mustard to have a run. 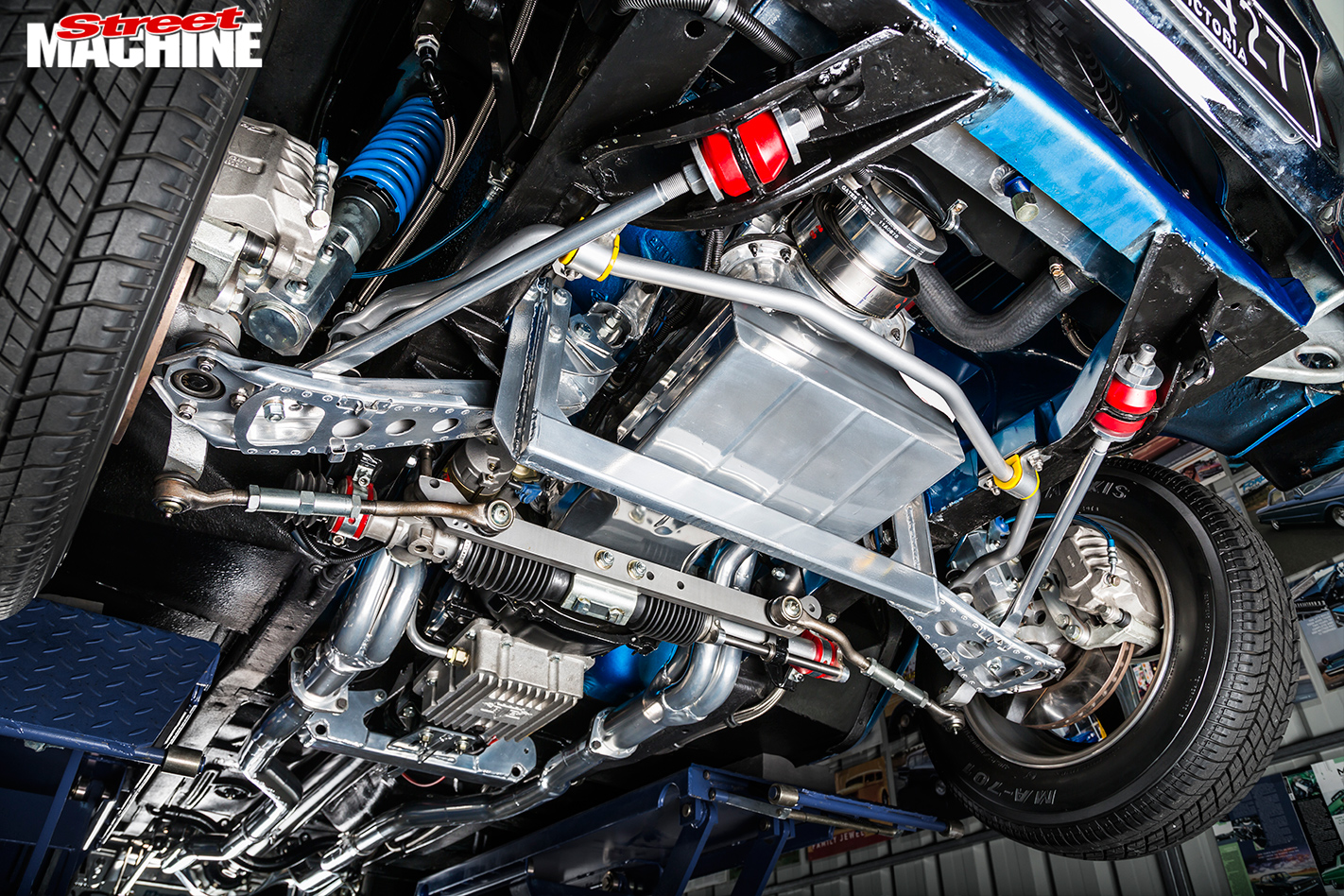 With a 4800rpm TCE torque converter, full-manual C10 auto and 4.11:1 gears in the bum, he won’t be stalling off the line, that’s for sure, even with those massive hoops. The car is also assured of running straight with decades of McDonald Brothers know-how down back, RRS rack-and-pinion steering up front and a substantial rollcage tying it all together. PBR discs on all four corners will be just the ticket for coming back to earth when the fun part is done. 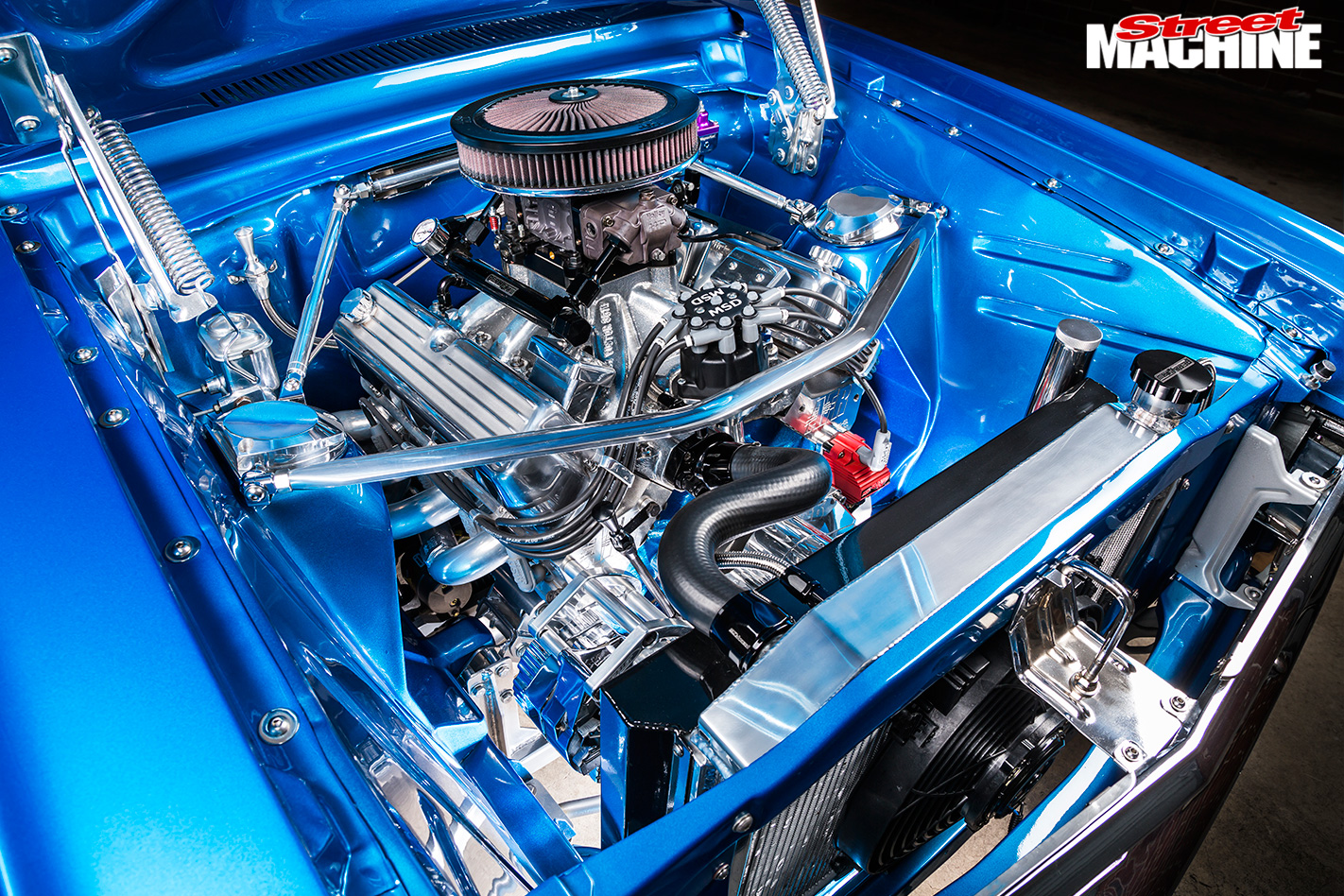 But the XP was constructed chiefly as a show-quality tough streeter. “I built it to show and go,” Pat says, “and it rides well.” He went for the RRS conversion mostly because the notched suspension towers – fabricated by Rob Ambizi in Diggers Rest – retain the original appearance of the engine bay but allow space for bigger extractors. The bonus came in the form of modern adjustable coil-over suspension units and vastly improved steering and stopping. 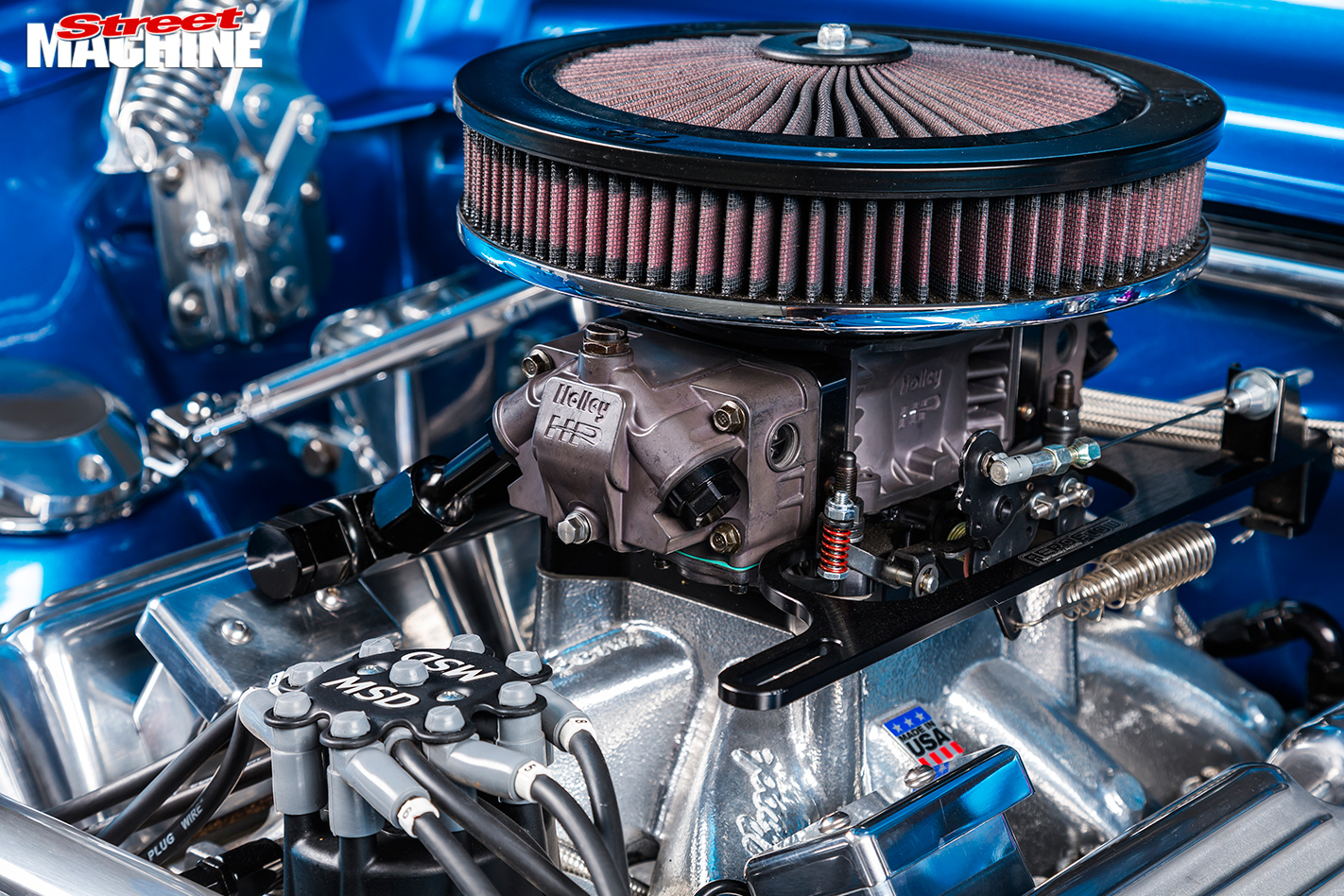 Sticking with traditional 15-inch-diameter wheels – as opposed to 22s – allowed Grant from Tylden Trim in New Gisborne to fashion over the tubs a comfy, full-width rear seat to Pat’s design, which was imperative if Pat’s two daughters were to join in the fun. Amazingly, what looks like a pair of buckets is a one-piece seat reshaped from a stock XP rear bench. The front seats are actual buckets from a Mustang, replacing the XP Fairmont seats that no longer fitted in with the new transmission tunnel, mounted on custom brackets to raise their height and retrimmed in period Falcon style and vinyl. 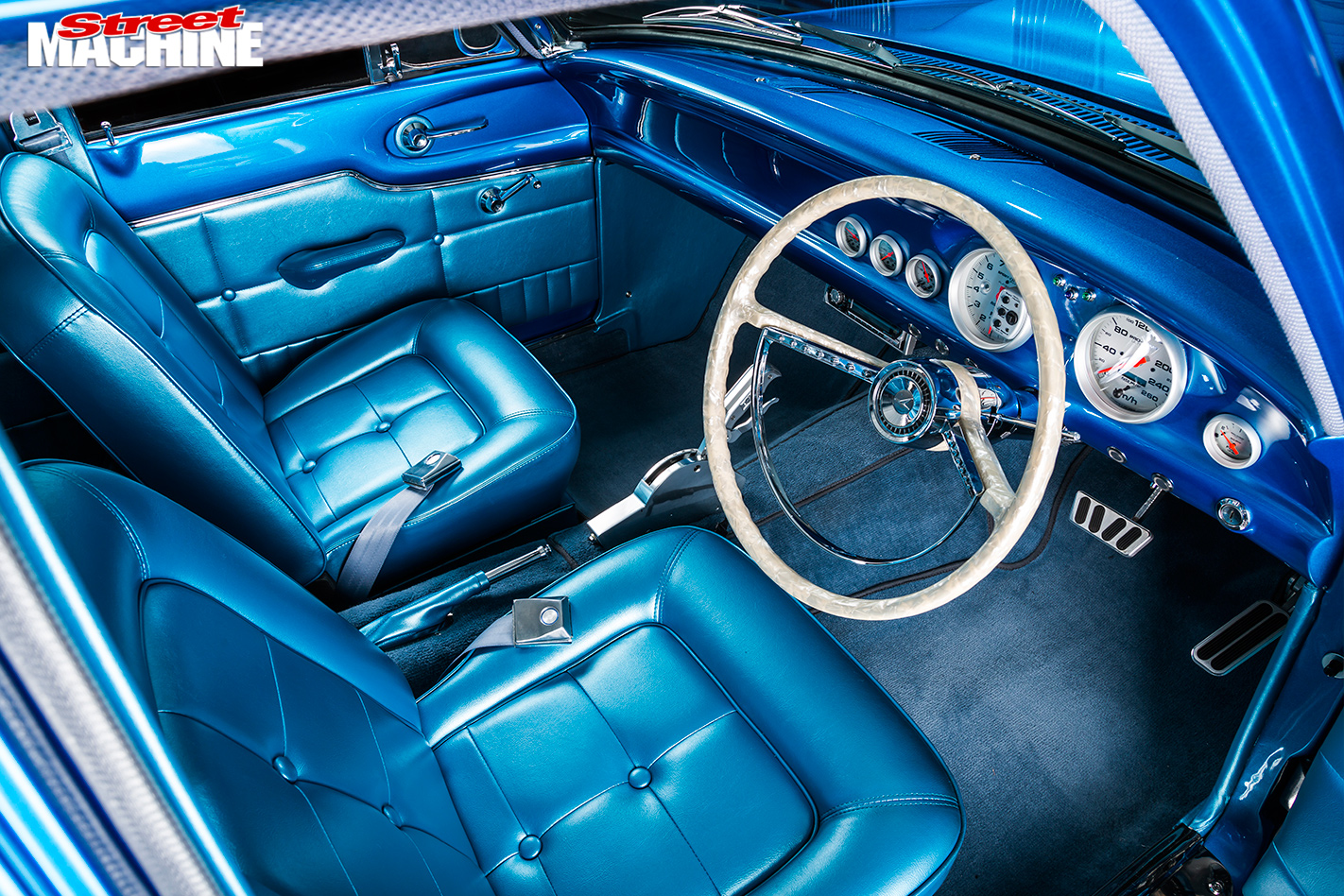 With no power steering, Pat stuck with the original wide-diameter, thin-walled steering wheel finished in pearl – always a good look in an old-style ride. But with a serious 600hp engine to monitor, the stock dash was never going to cut it, so he replaced it with a full set of Auto Meter gauges in a custom fascia. The manualised auto also dictated an equally tough B&M Magnum Grip shifter. More subtle but equally practical are the centrally located Lokar handbrake and Kenwood head unit mounted discreetly under the dash. 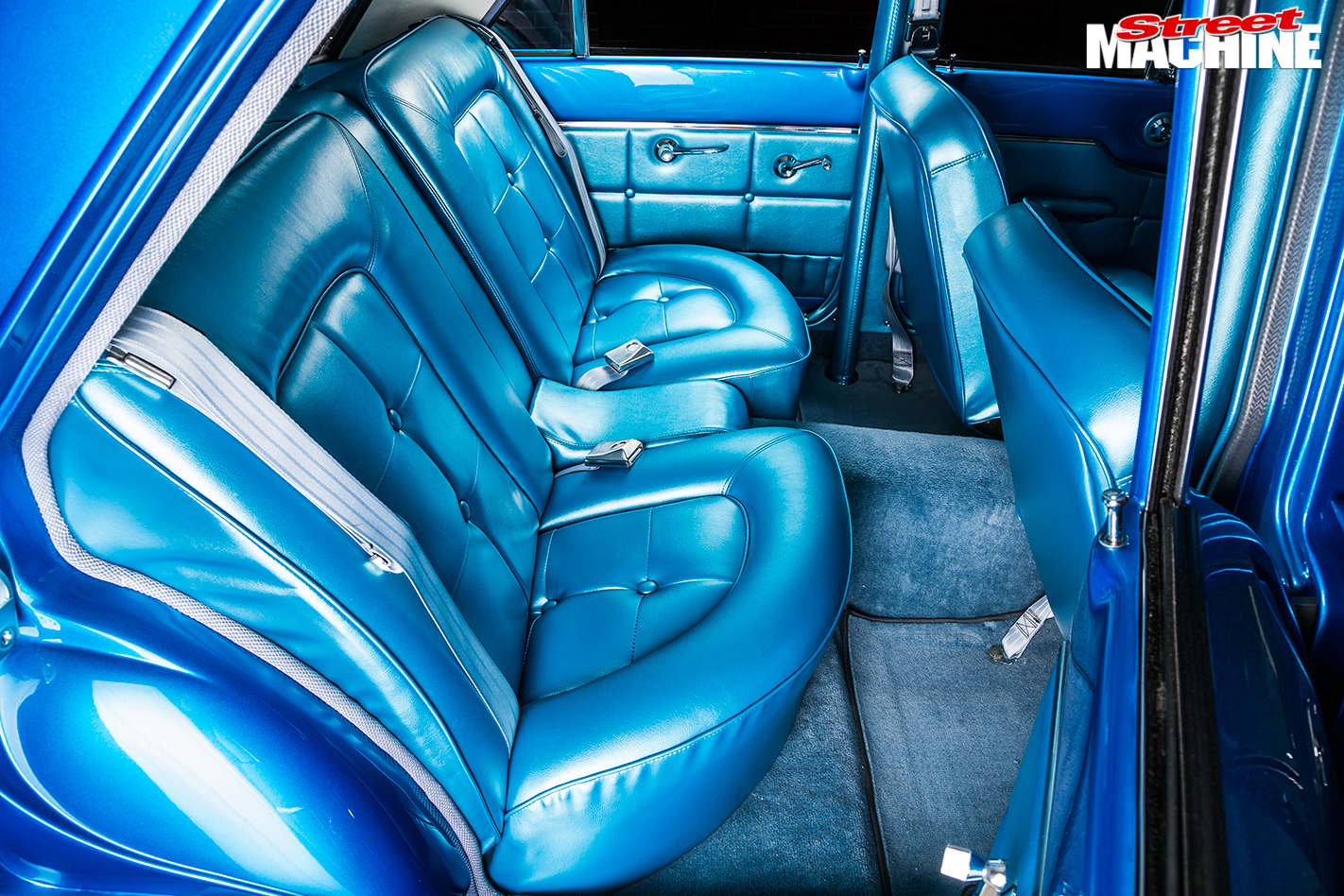 Pat added more metallic to the mix but stuck with the same hue when he asked Arnold Drogola to repaint the entire car in Sikkens Blueprint, with panel work by Pat’s good mate John from Taylors Lakes. Stripped of all exterior trim forward of the boot, apart from bold FE-style 427 badges on the front quarter panels, the miles-deep finish is perfectly complemented by the highly polished rims and beefy stock chrome bumpers. The undercarriage however is painted black, a nod to the car’s regular street use. 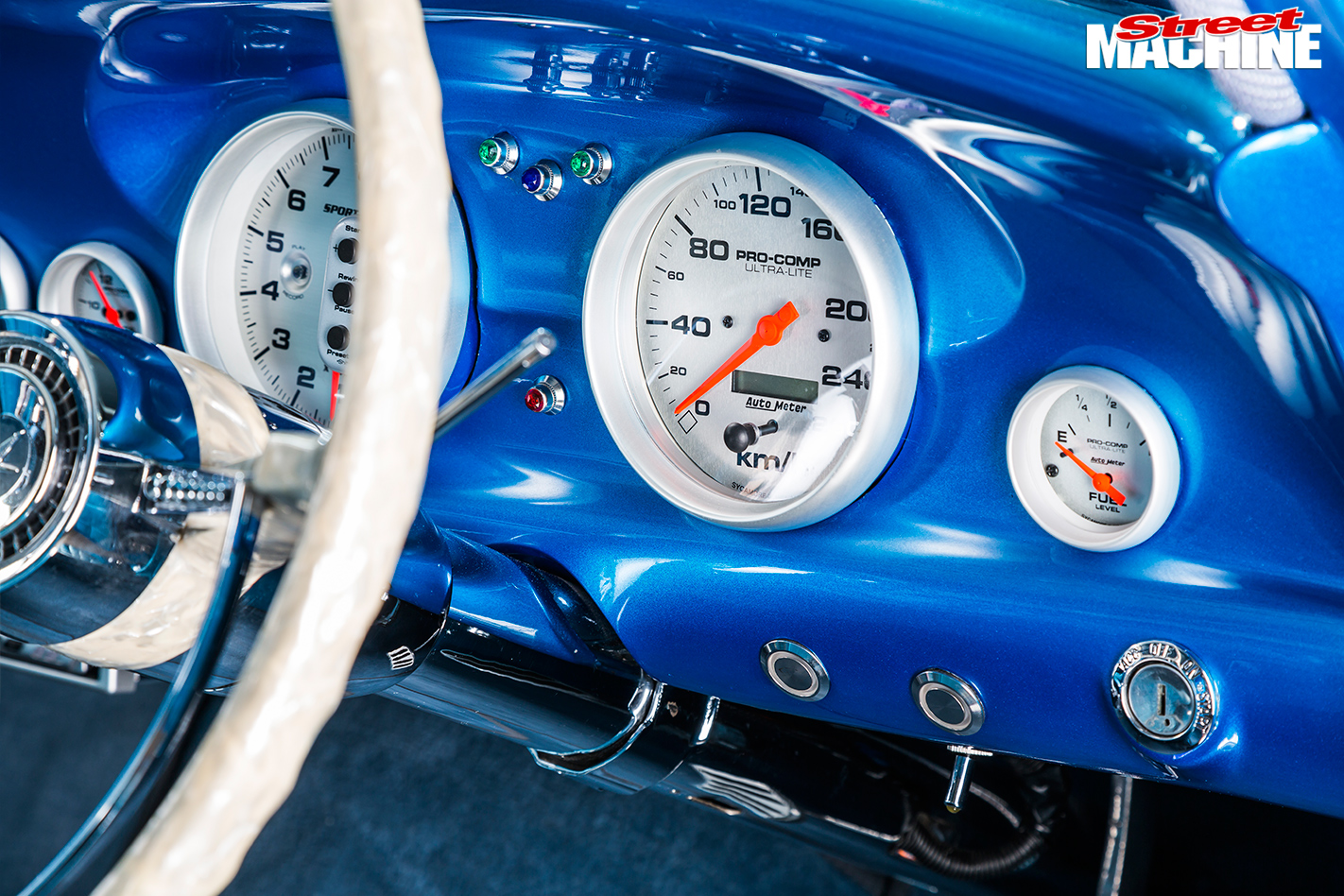 “If the weather is good, we take it out,” he says. “The wife just loves it. I haven’t driven it in the rain yet but it won’t worry me too much if we get caught out.” 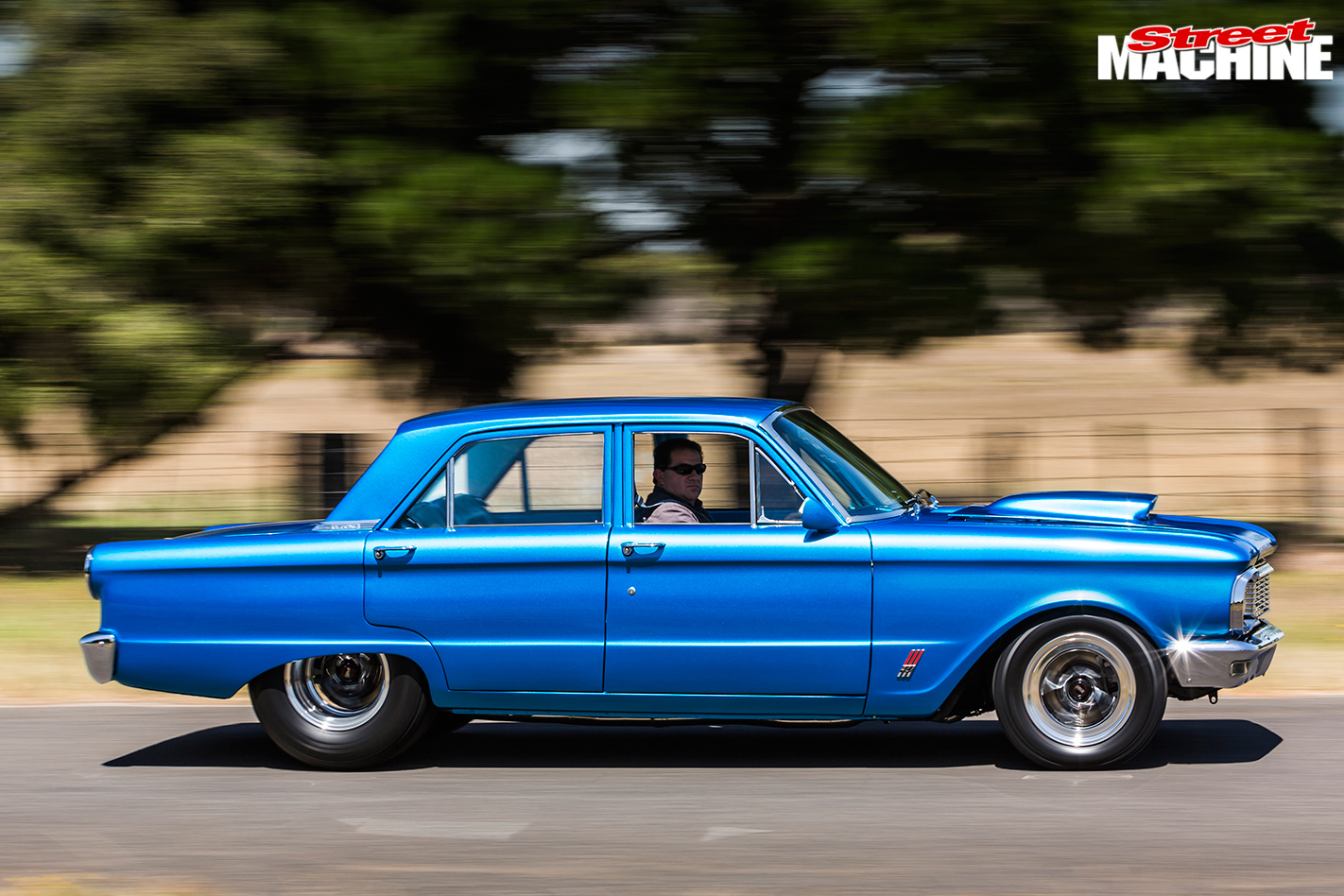 What about the wallopers? “I’ve never been pulled over. We had a show in town recently and they had the RBT out. There were half a dozen cops there and they just said: ‘Nice car, mate.’ If you don’t muck around, they leave you alone.” 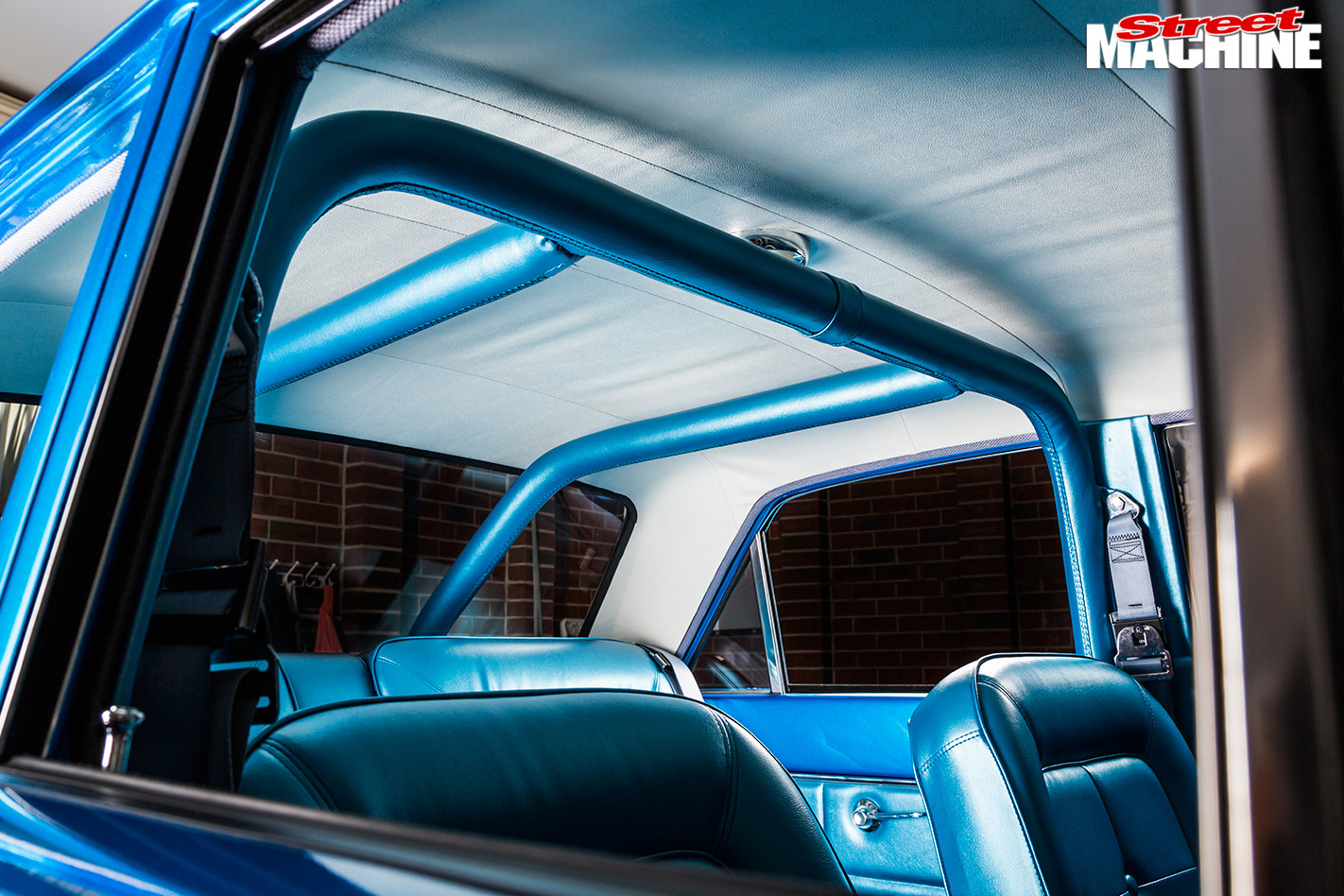 Completed seven months ago, the XP made its show debut at the huge Kiwanis Geelong All Ford Day at Deakin University in February, taking home the trophy for Best XP. You’ve got to be happy with that and Pat was chuffed to win in such a big event. Having got the taste, he says he’d love to do an XP coupe next, but for now is perfectly happy cruising, showing and racing his phenomenal sedan. 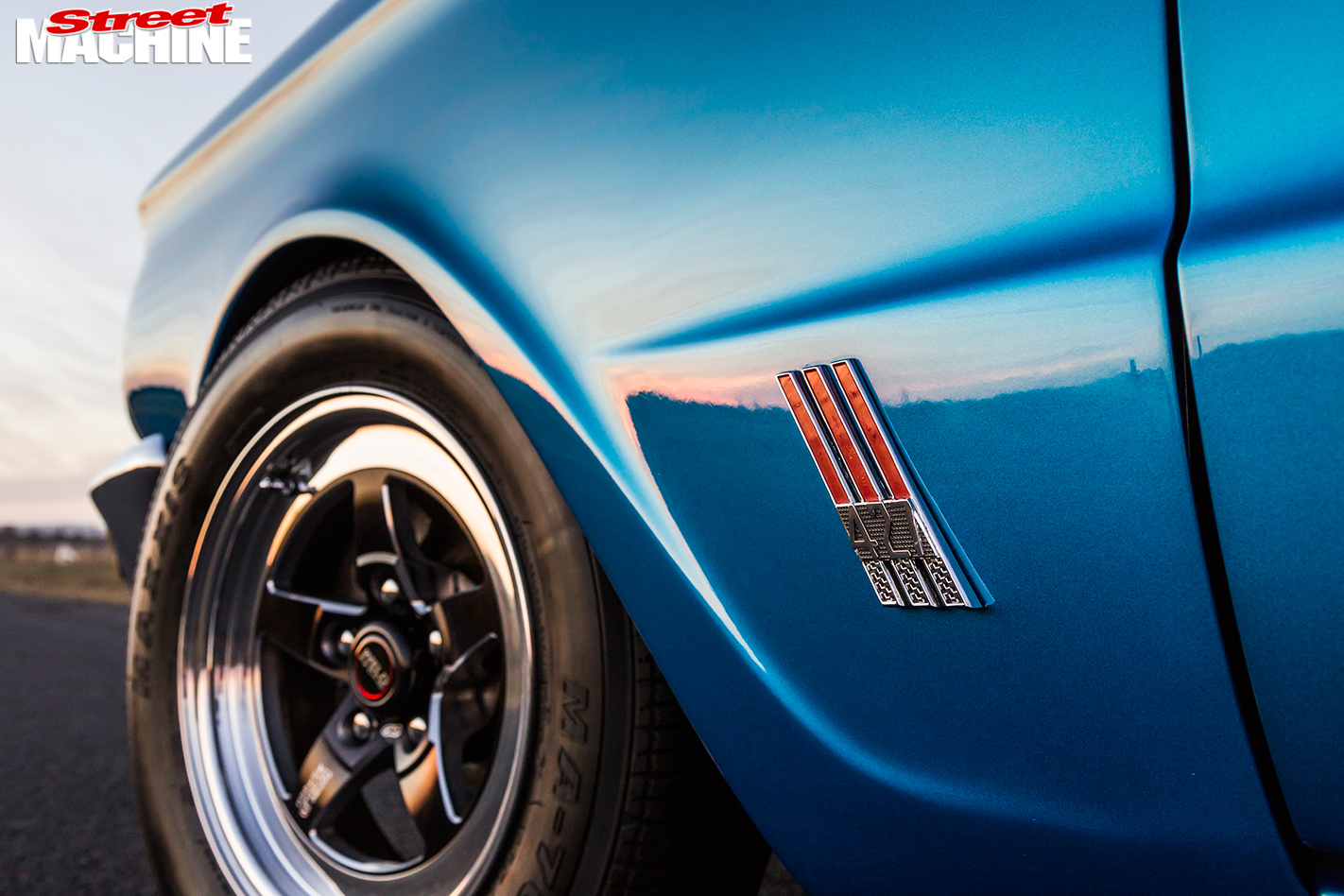