This XY has been through the wringer, but it's come out on top over two decades later.

What are the ingredients that go into a tough XY Ford? GT stripes? Very cool. Convo Pros? Toughest wheels around. But what if you want to build a tough XY that’s completely outside the square?

Perth’s Anthony Palazzo did. While GT stripes and Convo Pros are certainly both cool and tough, he has gone his own way, creating an XY that’s utterly unique but will still rock your socks off. 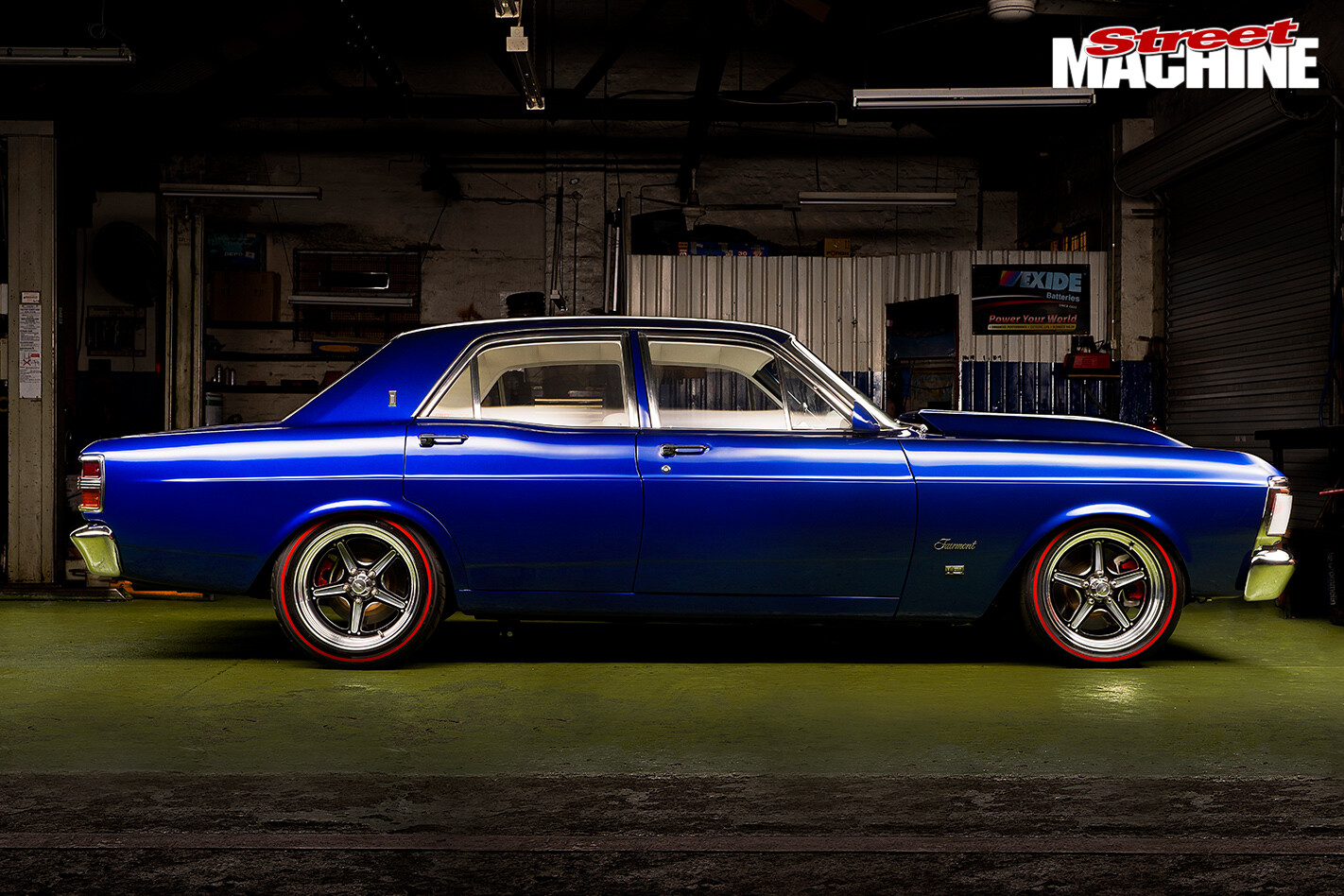 It all started in 1996 when Anthony was just a teenager and his dad brought home a brand new Ford Bronco in Moonlight Blue. He knew then and there he had to have his own ride, it had to be the same hue and, of course, it had to be a Ford. “I just fell in love with that colour from the start,” he says.

Sourcing a clean, white 302-powered XY Fairmont, Anthony wasted no time in giving the Windsor the once-over and having the interior re-trimmed. While the donk was out, he had the body resprayed in the colour it’s remained ever since – yep, Ford Bronco Moonlight Blue.

Rolling on Simmons B45s, the whole project took about 18 months – a lifetime when you’re just 17 years old. But although he had the coolest cruiser in his class, Anthony’s perfectionist tendencies meant he was never quite satisfied with the result.

Fast-forward almost two decades and a lot had changed. Anthony was not only long-qualified as a mechanic, but had taken over the business his father started back in 1969, Palazzo Automotives. Things had changed at home, too; he’d gotten married and had three kids. But he still had the XY, and he knew it was time to give it a proper freshen-up. With the benefit of industry experience, Anthony was now able to surround himself with the best possible people for every aspect of the build, something he certainly wasn’t able to do as a teenager.

Being a mechanic, Anthony started with the donk; he’d noticed a 4V Cleveland kicking around the workshop for as long as he could remember, so he hoiked it off to the machinist to give it a 30thou overbore, then grout-filled it to the core plugs for increased rigidity. Eagle supplied a stroker crank to bring the overall capacity to 408ci, while the heads were purchased from CHI and stuffed full of Crane gear. CHI also provided the intake, to which Anthony screwed a 950cfm Quick Fuel carburettor. “I’ve been building motors since I was 11 years old,” he says, “so I was able to save some dough and ensure the build was done right.” 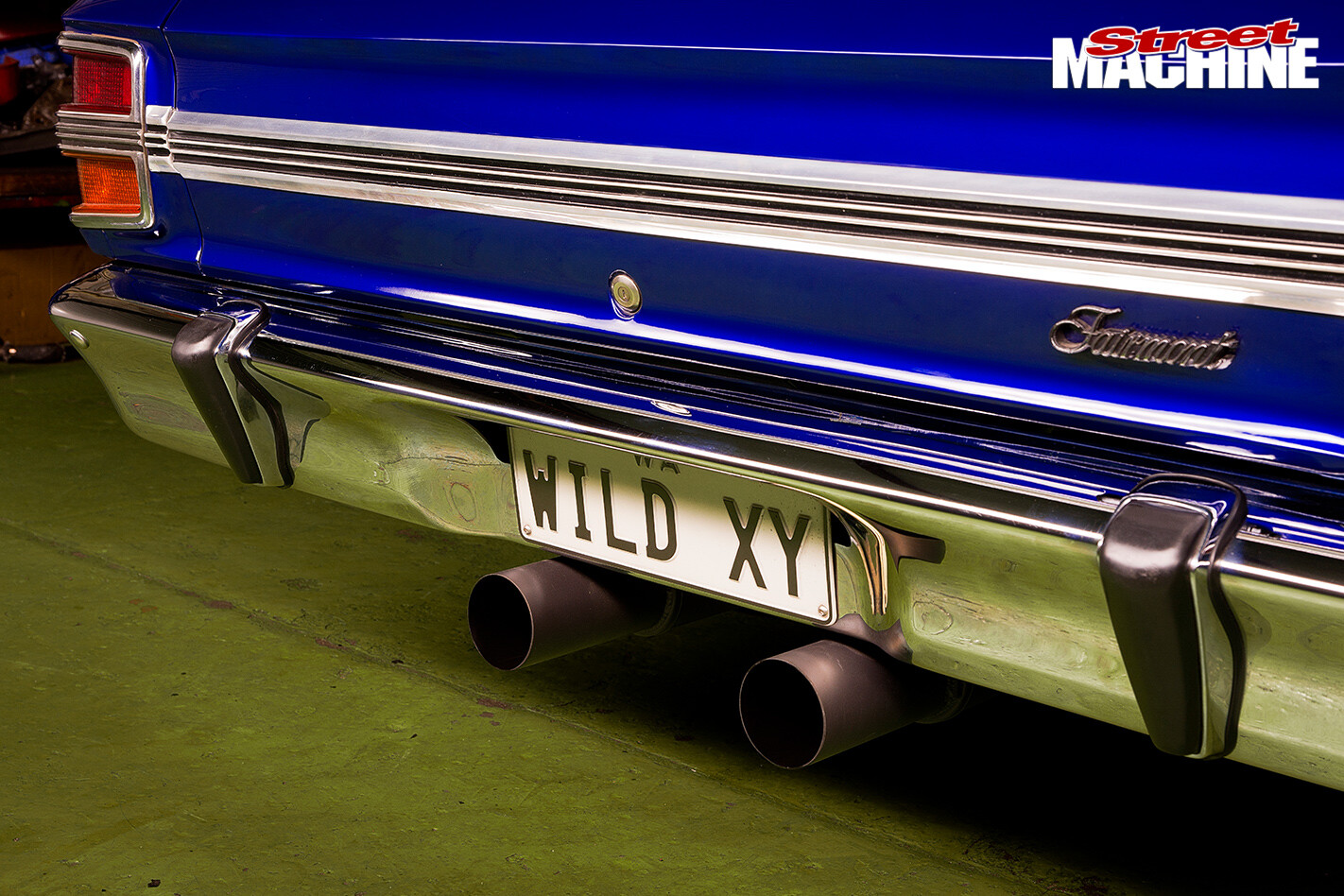 The exhaust was knocked up at home by mate Daniel Salvia; he’s done time in exhaust shops and knows how to make some good pipework. Using 3.5in stainless, it connects the Pacemaker extractors to the Magnaflow mufflers, then routes the gases out centrally, under the rear number plate

Although the previous C4 was a strong unit, Anthony wanted to ensure there would be no weak spots, so he made very good friends with JR at Dynamic Racing Transmissions in Connecticut, USA. JR sent over a fully built Mighty Mite X6, billed as the strongest C4 money can buy. “It’s probably overkill for the street,” Anthony admits, “but I don’t want my family stranded on the side of the road!”

Like a lot of old classics given a second chance at life, Anthony’s Fairmont has copped a bunch of suspension and steering products that just weren’t available first time around. RRS of Sydney supplied the bulk of the gear, including discs, calipers, coil-overs and steering rack, while Ididit had a tilt steering column that did the job nicely – all installed by Anthony himself. 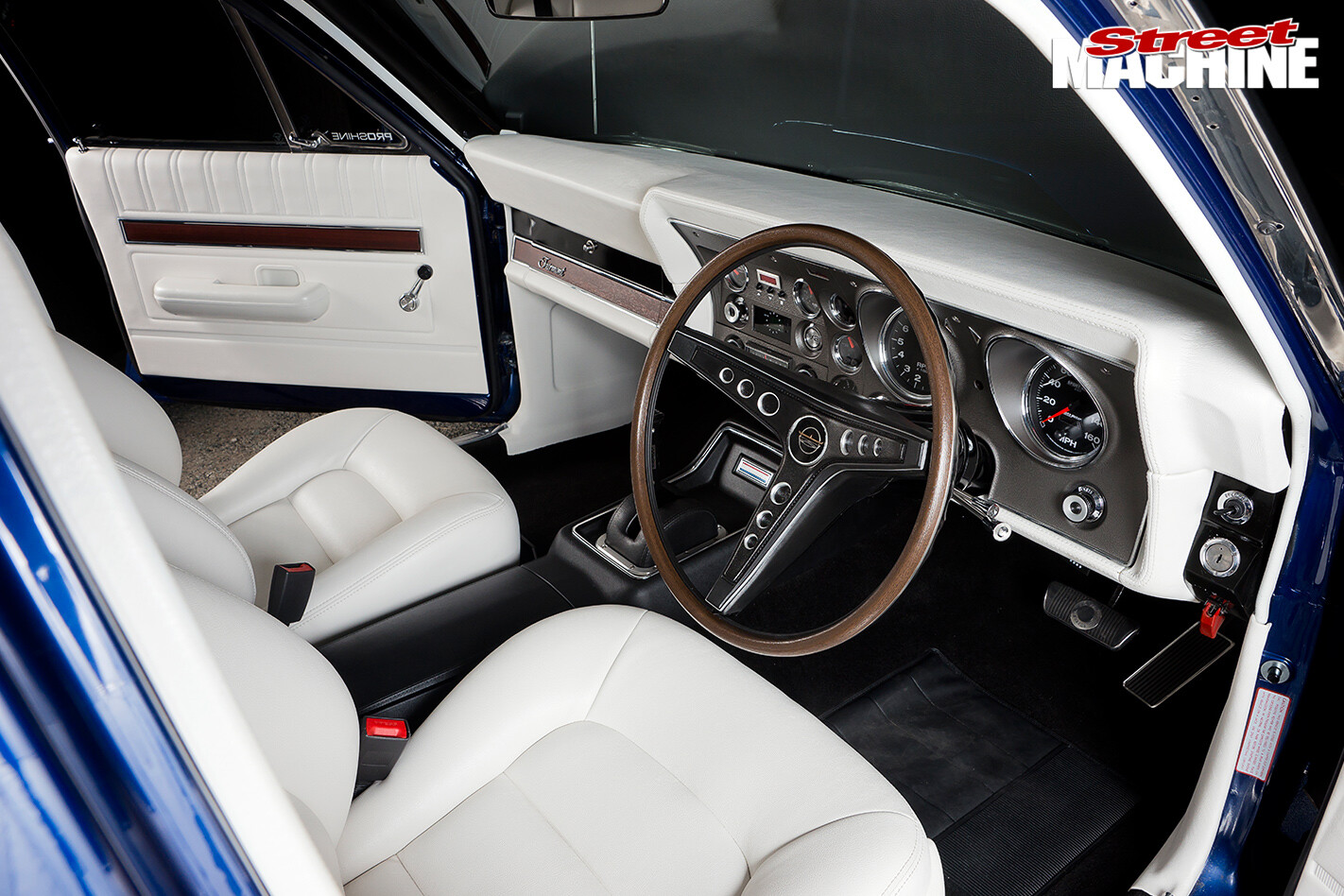 Old cars and modern gauges can be a tricky mix, but the Auto Meter speedo in Anthony’s Fairmont gives a true and accurate reading without the need for a cable or a conversion; it uses GPS!

Often when people build a Fairmont, they strip all the Fairmont gear, aiming for a Falcon GT replica or simply a smooth, neat street car devoid of any of the fussy stuff. But Anthony wanted to ensure there was no mistaking his luxury ride. “I didn’t want to go the GT route; it’s a Fairmont so I wanted to keep it a Fairmont,” he explains. Thus he kept all the JG34-spec niceties, including the stainless window surrounds, C-pillar motifs, ‘Fairmont’ and ‘V8’ badges on the guards and the overriders on the bumpers.

To bring the car up to date, the trusty B45s had to go and common equipment like Convo Pros were avoided. Anthony’s mate Johnny had just started up Elite Muscle Cars, and in doing so became a distributor for Billet Industries, so after considerable time spent browsing their catalogue, Anthony settled on their Street Lite product – 17x7s up front and 17x10s down back – bringing the perfect combination of attitude and class to the big Fairmont. 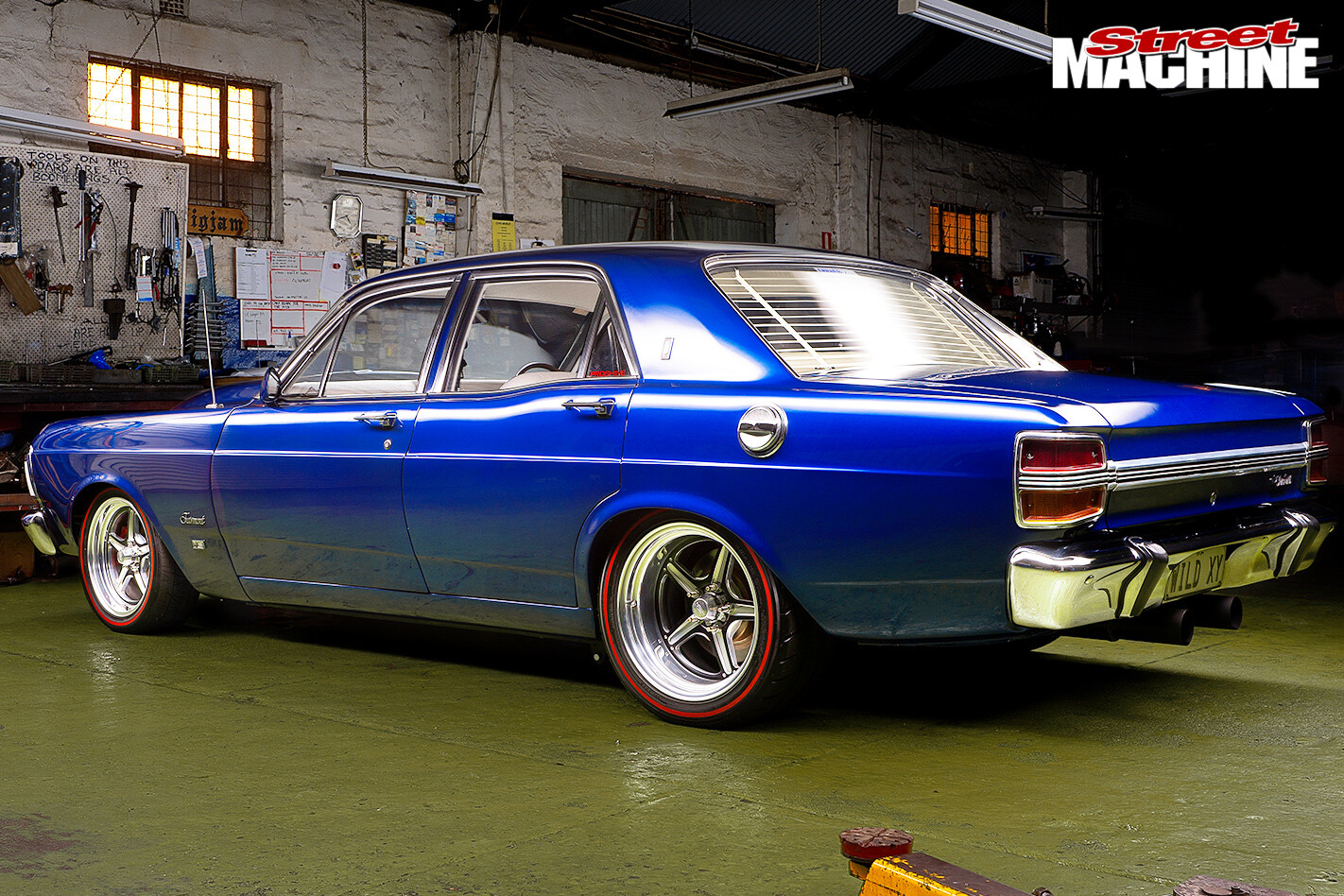 A narrowed rear axle and careful measuring by Anthony before he went bananas with the Billet Specialities catalogue has rendered tubs unnecessary; the 275s on 10in-wide wheels fit. Just

Being a luxo-barge, the Fairmont needed luxury interior, and this was an area Anthony particularly wanted to improve over the previous build. Speaking with Jason at World Custom Trimming, he outlined his requirements: the new interior had to be durable, safe and include the obligatory child safety seat mounts. Most of all, though, the interior had to be unmistakeably Fairmont.

Jason replicated the door trims in white vinyl, while Anthony provided a full set of pews from a ‘modern Fairmont’ – aka Ford G6E – for Jason to retrim. Headrests were removed for that period-correct look. “The old seats had to go; they were like driving my Nanna’s lounge,” Anthony laughs.

He also wanted to ensure the Falcon GT dash remained intact, albeit with a full upgrade of the instruments. Although all gauges were replaced with Auto Meters, Anthony removed the standard glass and bezels from the lot of them, replacing them with the original Ford stuff. Where he couldn’t find original stuff that fit, he made up surrounds from random gauges he found ex-UK that matched perfectly. 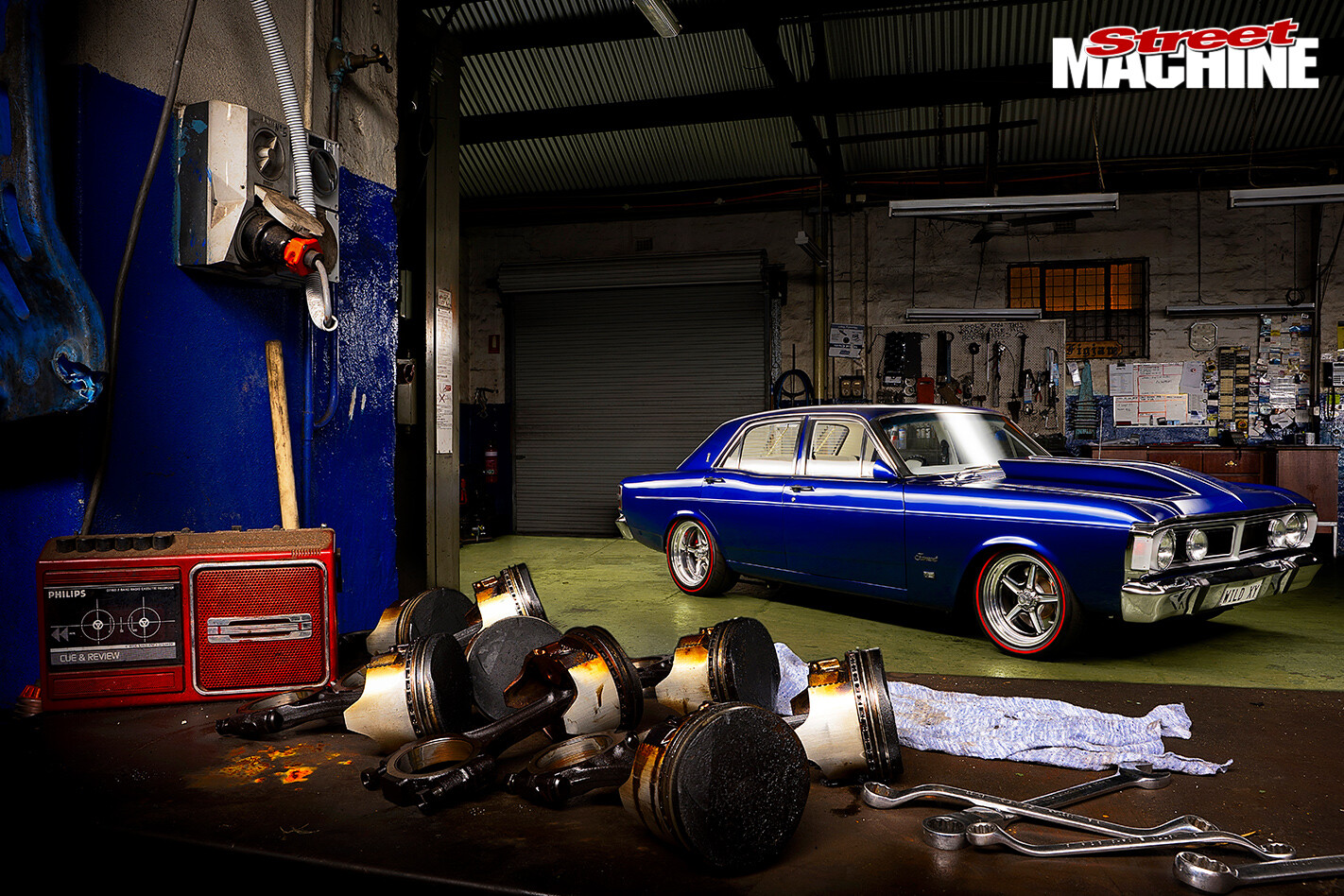 While a thoroughly modern workshop, Palazzo Automotives’ interior is decidedly old-school. Radio is plastic, not classic; the Fairmont is the other way around

Despite the years on the road, much of the paint Anthony had applied to the XY as a teenager was still excellent, so the boot and roof were left untouched. Jules at Xtreme Colour Enhancements in Morley mixed up and applied a fresh batch of Moonlight Blue for the doors, guards and the new Alfa Motorsport bonnet.

Overall, the build was fairly straightforward; testament to Anthony’s meticulous skills and his knowledge within the industry. The end result is a tough XY Fairmont that eschews some of the current trends around the model in favour of something different, built solely for Anthony and his family to enjoy. He intends to pull it out of the shed and go cruising with his wife and kids as often as he can; something that, as a 17-year-old, he never dreamed he’d be able to do.