This Holden HJ Statesman mainlines fuel straight into it's big-block

Can you have a big-cube, big-power big-block that's streetable? You can with fuel injection

THERE’S nothing quite like the shove of a big-block. While screaming small-blocks, turbos and blowers are fine, a big-block up front is something truly wonderful. Stand on the loud pedal and it’ll keep compressing you into your seat until you run out of road — or balls.

David Di Natale knows the feeling well. In fact he’s made the experience even better with electronic fuel injection but it’s been a hell of a learning curve to get his ride to where it is today. 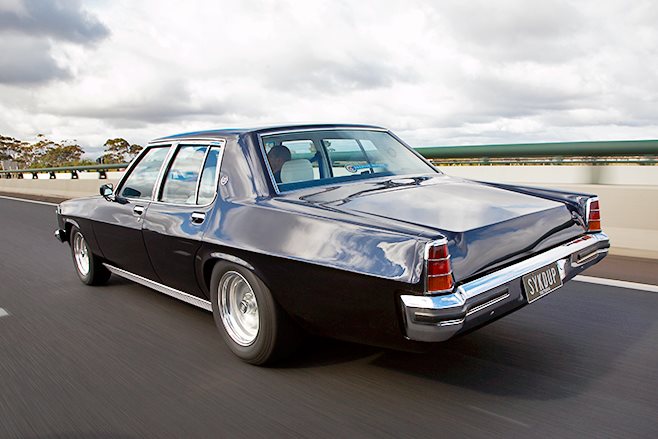 For David, choosing an HJ Statesman was the easy bit, as natural as breathing.

“Dad had the first one, which was metallic brown, when I was 11 and the passion escalated from there. It was a great family car,” he says.

But it’s not only the family tradition that does it for him; it’s the design of the Statesman’s rear-end: “I love the tail-lights and the fin-like stying.”

David was just 15 when a chamois-coloured example became available; the family snapped it up but he didn’t actually pry the keys out of Dad’s hand for another two years. Then it was an endless cycle of cruising with his mates and travelling back and forth to university where he was studying electrical and mechanical engineering. 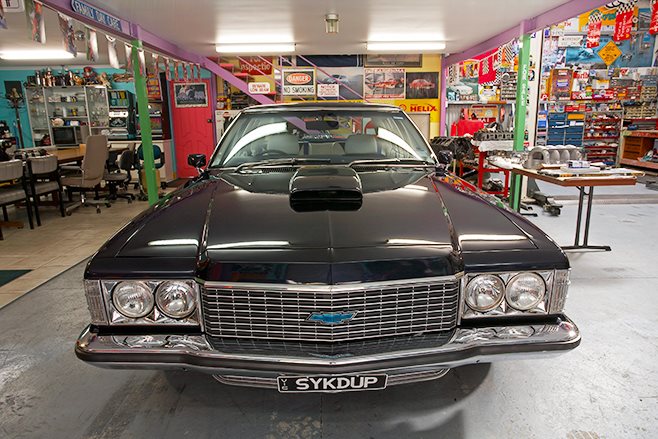 During one of those uni trips, David experienced Newton’s first law of motion (look it up, kids) firsthand and found himself with a significantly shortened Stato after hitting two cars while avoiding a tram.

Without a huge wad of cash at his disposal, the Stato had to make do with a few odd-coloured panels transplanted on. That was enough to get him to uni and back each day.

Twelve months later he decided to take the old girl off the road and give her a makeover. However, blowing up the donk in his Nissan Patrol daily driver was to have unseen repercussions for the Statesman.

“It was cheaper to fit the 308 into the Nissan, rather than rebuild its six,” David explains. 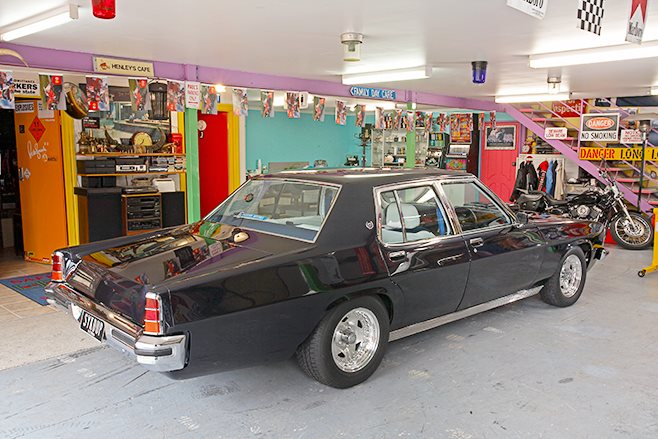 That meant he had to find a new powerplant for the Statesman. He set about looking for an EFI five-litre to fill the position when he came across a 454 big-block to suit. The price was right, so he snapped it up.

He was advised to go to the local big-block guru; we’ll call him Mr X. Mr X made all kinds of promises and for a thick wad of cash, David expected a decent powerplant. What he got was a sub-standard engine slung together by someone else.

Too low compression combined with too big a camshaft was just the start of his problems.

So David went to see Mr Y, who made all kinds of promises about how he was going to fix Mr X’s shoddy work. Trouble was that when the newly ‘fixed’ big-block threw a rod during a burnout comp Mr Y didn’t want to know anything about it. 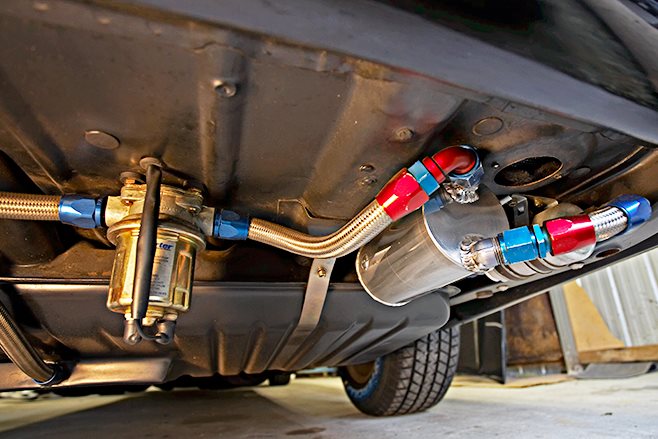 To keep the fuel system out of the boot, David laid the surge tank on its side — it worked! A Carter pump fills the surge tank while a Bosch 044 feeds the high-pressure EFI fuel line

“It sounded like a moneybox when we took it apart. It was at that point that I decided I was going to put an injected Holden in it,” David says.

While that would have created a smooth-running cruiser, it would have doomed the Statesman to the mediocrity of being just another Holden with a Commodore engine. Finding another big-block Chev — this time from a tow truck — saved the day.

The new engine was good. It ran mid-13 quarters in Dave’s big Stato; not bad considering he used to have 200kg worth of stereo crammed in the back. Used to — not any more, though.

But the engine eventually showed signs of aging and David was faced with the question of who to trust with the rebuild. 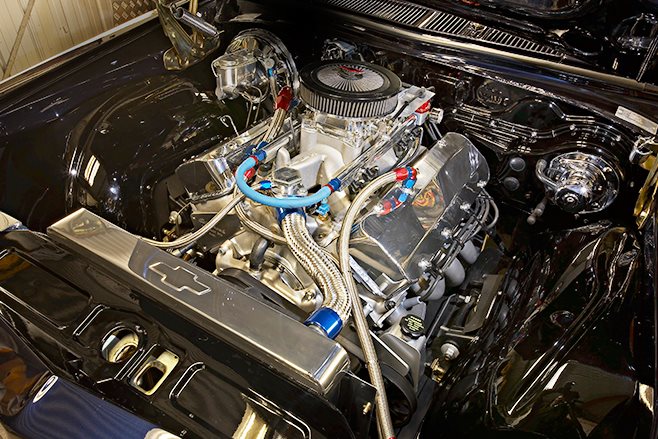 The fuel rails are custom but the manifold is an off-the-shelf Holley unit, which made the job easier. The 50lb injectors are controlled by a factory VN ECU, with a custom chip from COME

“I vowed not to trust another engine builder again. So one of my best mates, Sam Asaad, and I developed and screwed the engine together.”

The idea wasn’t to go overboard. They just wanted something tough, something that wouldn’t run home to mummy when they leaned on it. Working from the bottom up, the boys used the factory crank and hung a set of Scat rods on it. Speed Pro pistons put the squeeze at 10.2:1 when combined with a pair of Edelbrock RPM alloy heads. With a Crow cam working the valves, the crowning glory is a Holley 9901 intake manifold that David picked up secondhand.

The single-plane Holley intake came machined for injectors. A set of Rochester 50lb injectors and a 1250cfm throttlebody handle the fuel and air duties. 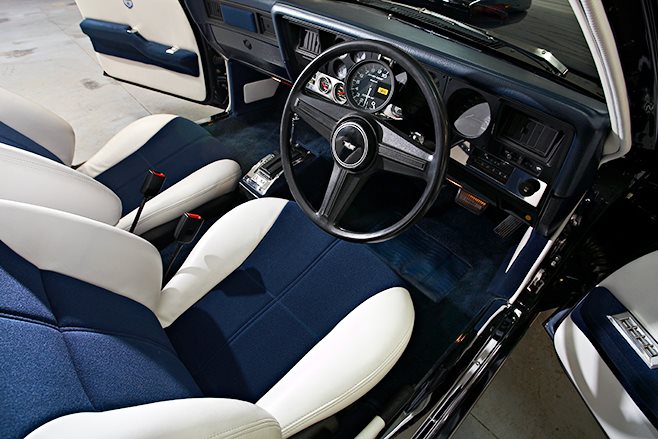 Up front, David went with a pair of Nissan Maxima electric seats — he liked the shape and they aren’t as high and chunky as the factory Statesman units

What runs the show? A simple Bosch 808 ECU — the same unit you’ll find in any old VN/VP Commodore. COME did the tuning on its engine dyno and with the timing cut way back, the 454ci big-block punched out 461hp and 478ft-lb of torque. More recently, the guys at COME cranked in some more timing and more power, which has really brought the engine to life.

“It’s like a different engine now,” he says. Instead of a cranky monster, David and Sam have built a torquey powerhouse that makes more than one horsepower per cube and idles like a stock Commodore.

Dave’s happy with the injection: “I’ll never have to worry about it again, that’s what I love about it.” 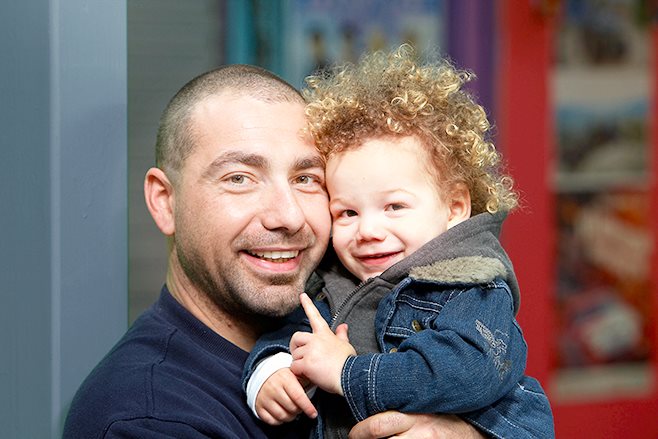 Building the rest of the car was almost easy in comparison. A new shell was sourced because the original had a fatal dose of cancer. David’s cousin, Sean, handled rust repairs before it went to F&V Berton Body Repairs for a coat of Dulux Raven Mica. On the inside he’s gone with a pair of Nissan Maxima front seats, retrimming the lot in white marine vinyl and royal blue velour. Underneath the car sits a simple but tough Turbo 400 and Ford nine-inch combination.

“It’ll run on unleaded but I usually run it on premium,” David says. “I’ve never raced it with this system but I plan to soon. It’s pretty much the way I want it to be. You can cruise all day. It’s grouse to drive.” 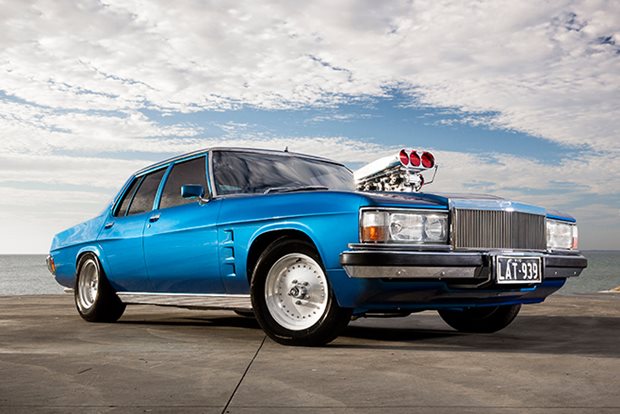 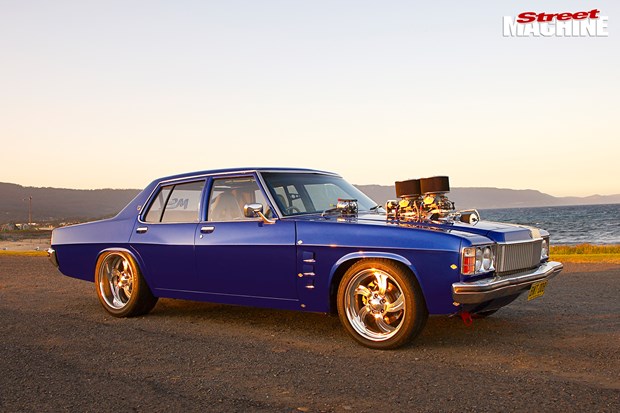 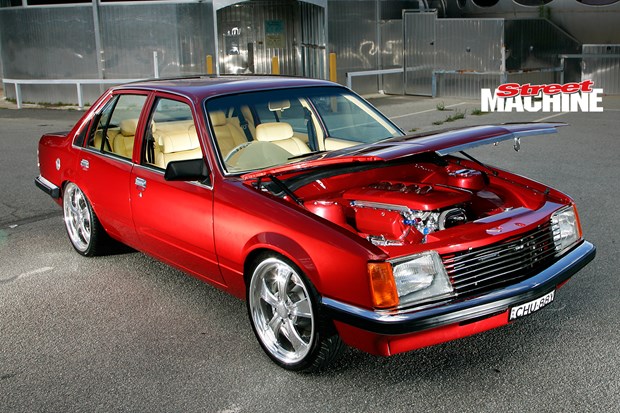